I didn’t really know what to expect when I met with Lab Zero Games this past week to check out their latest game, Indivisible, at E3 2017. Creators of the cult-hit Skullgirls, Lab Zero initially funded Indivisible through the crowd-funding site Indiegogo in December 2015. The game promised an RPG style similar to that of Valkyrie Profile and a similar hand-drawn animated aesthetic to Skullgirls. A year and a half later, I was interested to see how Invisible is coming along - what I found was one of the more unique offerings available at E3 this year. 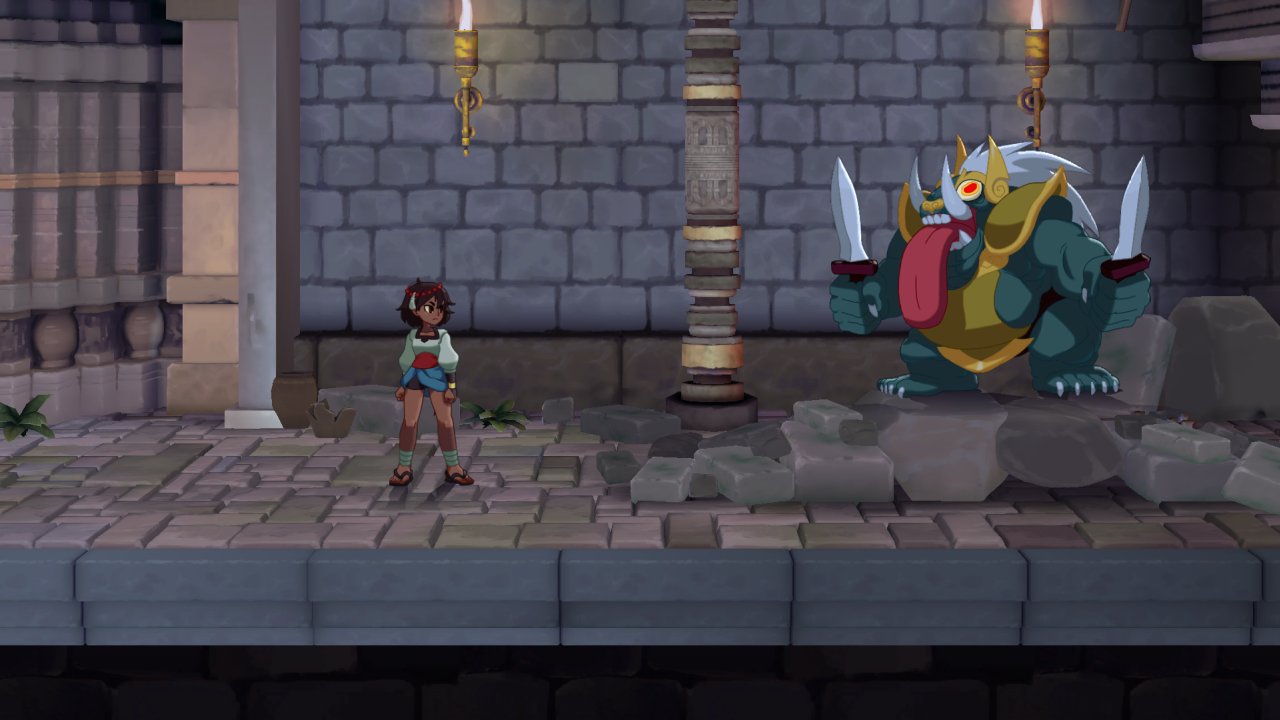 In Indivisible you play as Ajna, a girl whose village of Ashwat was destroyed by an evil warlord. During the trauma she discovers a power that causes her to absorb the spirit of the general into herself. Forever changed, Ajna embarks on an adventure to discover the true meaning of this power, and unite the peoples of her world.

While playing Indivisible, the art is what initially caught my eye. The hand-drawn effect of the animation is nice, but that aesthetic is becoming more and more popular these days. No, what really caught my attention was how bright the game is and how much color it is showing off. The game obviously shares a style with Skullgirls, but the choices made within that visual theme are completely different. While Skullgirls had the look of a Japanese anime, Indivisible looks more like a Saturday morning cartoon.

Once I was given control over Ajna, I started to experiment with the overworld movement. Even when you have more characters in your party, Ajna is the only character present in the overworld. Outside of combat, you can explore the world by running, punching, sliding, jumping, and attacking with a weapon. The weapons open up new areas - an axe can cut through trees, exploding arrows can clear passageways. There’s a platforming element to the game, but it feels pretty easy to grasp and doesn’t seem overly complicated.

While traversing the overworld, I immediately started running into enemies. The was a temptation to jump over the enemies and see if I could avoid the combat completely, but I opted to use my weapons/slide maneuver to attack them. Once I attacked an enemy or interacted with them, the game’s camera tightened into a combat screen where I commanded my heroes with button prompts.

The combat in Indivisible is turn based, but the turns are tracked by counters underneath the party. Instead of using a turn-based menu to choose character attacks, I would just hit a button on the controller that corresponded with a certain hero and that hero would attack. I could pick between three attacks by pressing either up or down on the D-Pad.

While I didn’t find the strategy overly apparent, I learned that I could combine my different attacks for better results. For instance, the healer character can attack enemies with their mortar and pestle, and each time they do it enhances their healing ability.

Based on what I was told during my time with Indivisible, there will be more tutorials in the game to really get a sense of the combat. That seems likely, since my demo of the game seemed to be something specifically created to give me an overall taste of the mechanics, as opposed to a vertical slice of the gameplay. However, the game is not forgiving, and while it took me a while to figure out the flow of the combat, I got my butt kicked pretty hard early on.

After winning a couple of battles to start out, I acquired the first party member aside from Ajna. With my party numbers doubled, it was easier to attack, but trying to make sure I was defending the correct hero was more difficult. Circle controlled my attacks and blocking for Ajna, while triangle was used for my new character. Both Ajna and the new party member seemed to be heavy hitters, so I cycled using them against enemies. A good fighting rhythm built up a special meter and once the meter was full I could trigger powerful attacks. Alternatively, I could save the power meter and have it replenish my health after fighting.

I got a better sense of the mechanics with Ajna and my second party member, but it wasn’t until I had all four of the party members that the combat really started to click. One of these characters fought using a shield to bash enemies, and the other was the aforementioned healer. With four characters, I was able to use the left bumper button to perform a party block, meaning that I didn’t have to try and figure out who was being attacked and hit the correlating button to block them from damage. 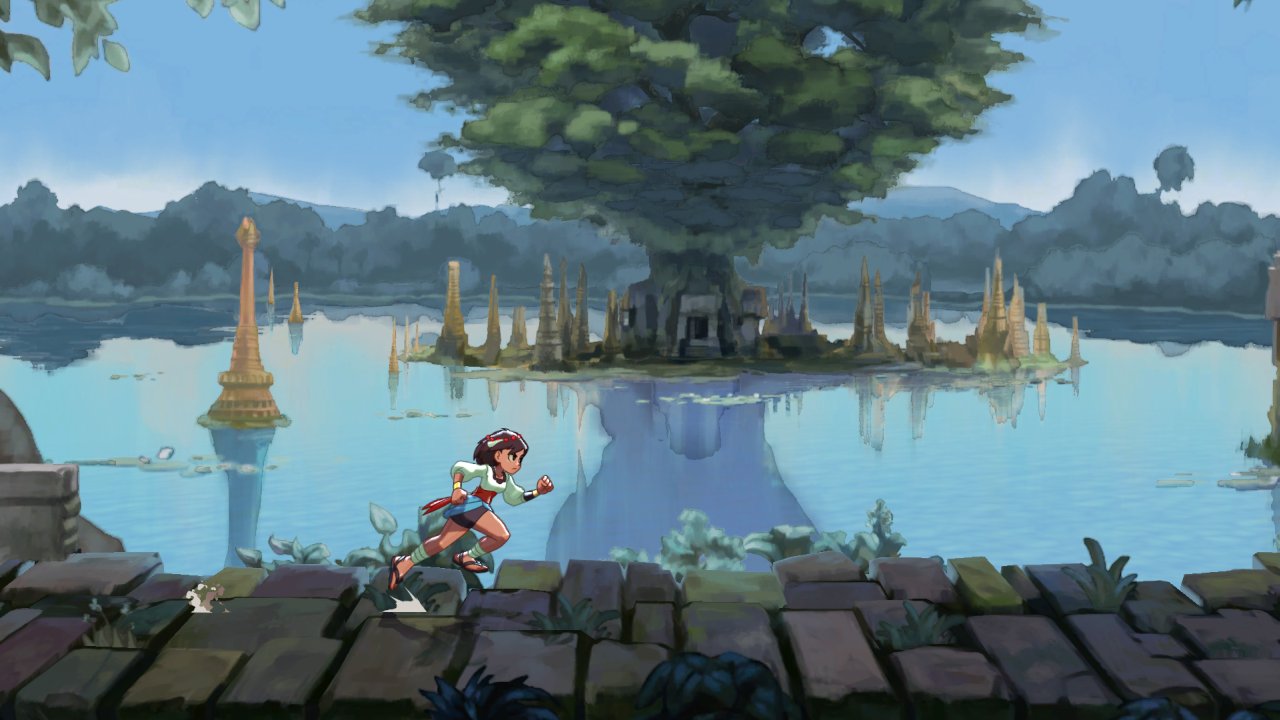 What really helped was that as I defeated enemies, I was able to trigger multiple attacks with each hero. This meant that I could chain actions together, sometimes burning all of my attacks for a hero at once, other times holding back to make sure I had a few attacks left over. Each individual attack takes a little while to charge, but if you’ve unlocked it you can save up to three attacks to use in a row. This opened up some strategy as I started to charge up the healer of the party with the normal attacks, then heal my party for more. While doing this I would try to stagger my attacks with the party, making sure that I was keeping enemies off guard.

As I progressed through the demo, the enemies grew bigger and more difficult until I hit the end boss, a giant griffin. By this point I was starting to really understand the combat and time management that is required in Indivisible. While I had struggled early on, the last boss was hardly a challenge.

The combat of Indivisible helps the game standout from other RPGs, something also aided by the interesting visuals. Toward the end of my time with the game, the room having quieted down as the second day of the show ended, I was also able to hear Hiroki Kikuta’s wonderful score. Lab Zero certainly have a game on their hands that’s worth checking out - even for those who weren’t initially drawn in by the crowd-funding campaign. Let’s hope it keeps expanding the oddities of its design and delivers the experience so many are expecting.

Lab Zero Games are aiming for a 2018 launch with Indivisible on the Nintendo Switch, PC, PlayStation 4, and Xbox One. 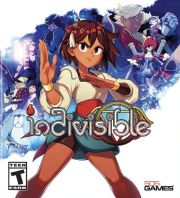 All videos for Indivisible (5)
Advertisement ▼