I’ve been waiting for a follow up to Housemarque’s PlayStation 4 launch title, Resogun, for a long time. The best game on the PS4 at launch, Resogun highlighted the fast-paced, arcade-style gameplay that Housemarque had been consistently delivering for Sony since Super Stardust HD on the PlayStation 3. Now, the developers are offering up something that feels like a spiritual successor to their highly acclaimed first PS4 game - Matterfall. 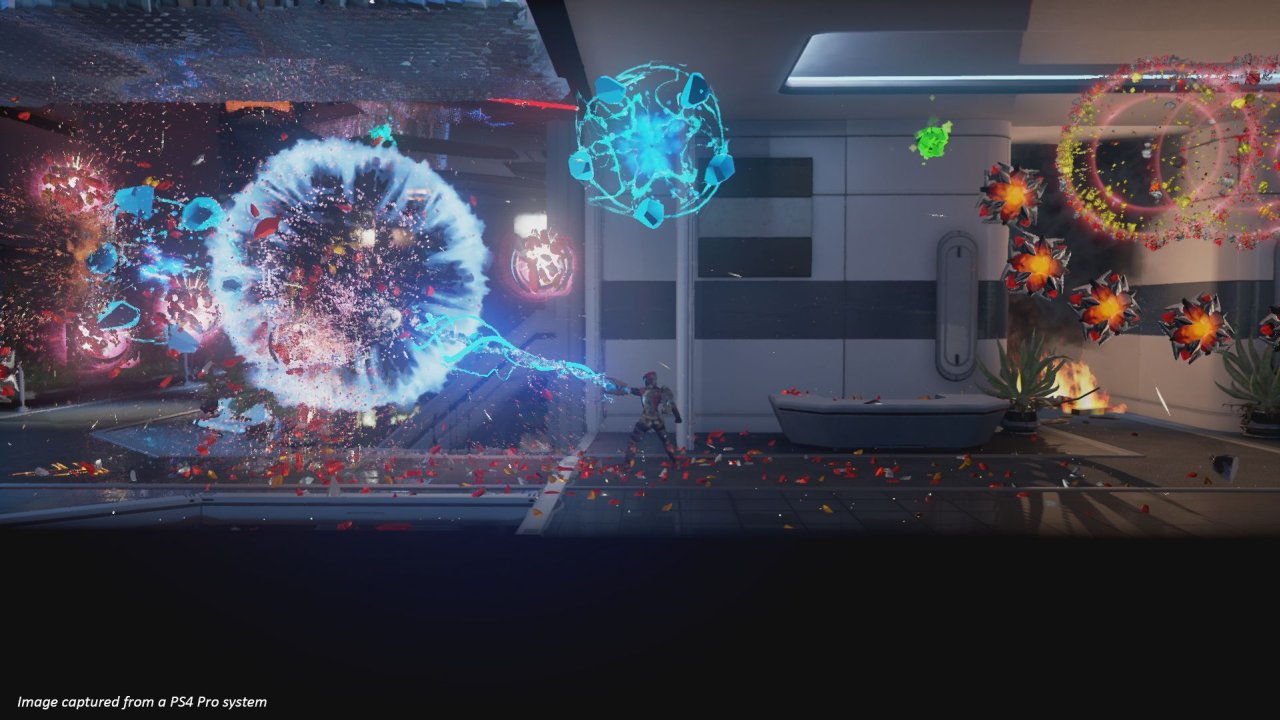 It’s easy to pick out the stark contrasts between Matterfall and Resogun. Unlike Resogun, Matterfall is more of a 2D metroidvania action platformer - for the uninitiated, Resogun was a much simpler concept. However, the two share a visual language that made it easy for me to draw parallels between them.

The game started me out slowly with a tutorial that made sure I had time to experiment with platforming controls. This is Housemarque’s first platformer since Outland, but it still felt polished and refined, and more importantly it blended with the bullet-hell/shooter elements of Resogun seamlessly.

After I mastered the simple jump and double-jump controls (though jump is tied to R1, which feels weird), I learned the all-important dash move. Not only can the dash move help you navigate the platforming, but more importantly it can be used in combat to freeze enemies and weaken them to gunfire. The melting pot of arcade and platforming concepts made Matterfall a little difficult for me to grasp at first, but slowly I started to get the hang of it and chain the jumping, shooting, and dashing together more effectively. As I ran into more enemies it became important to master these controls as I needed to quickly instigate the dash move to get the drop on foes. 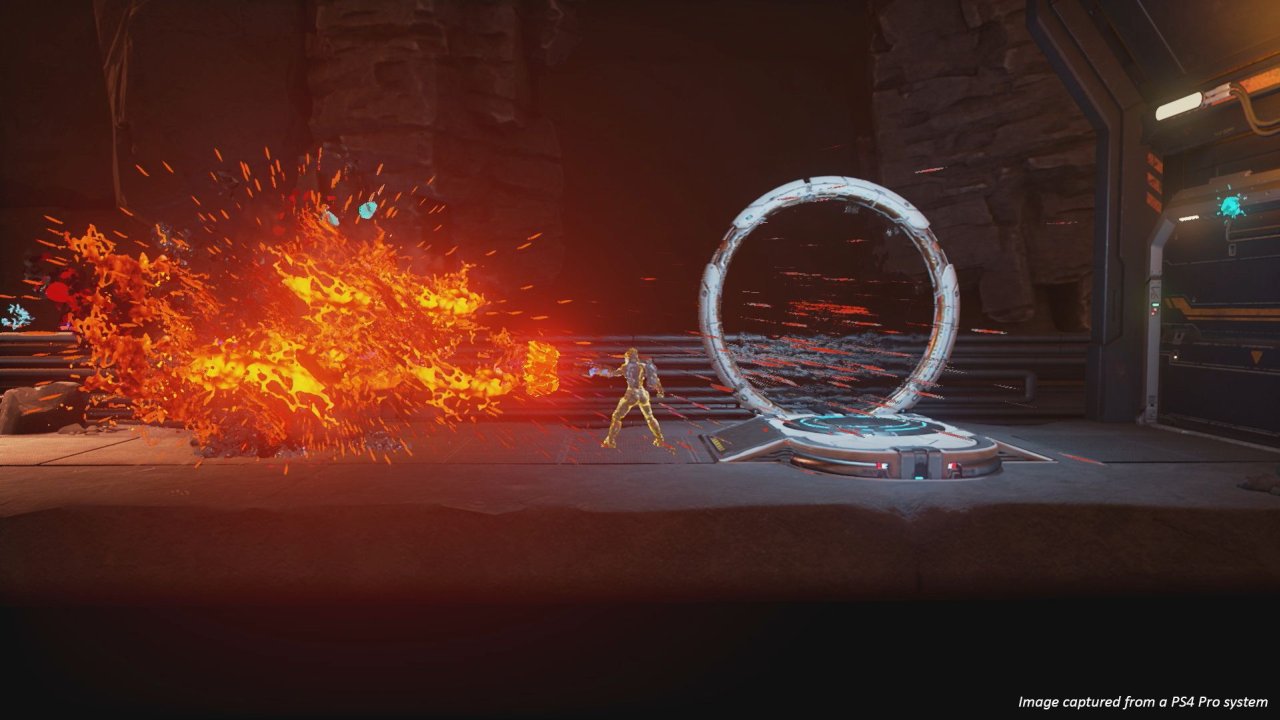 Also encouraging the chaos is the odd geometry of the level layout. Clearly Matterfall has been designed to discourage players from hanging back and playing it safe. There aren’t many nooks to hide behind and the ability to take pot-shots at enemies isn’t readily available. Often, I felt pushed to dodge right into the middle of the fray and start unleashing hell.

I ran into a series of enemies, varying from harmless flying types to hulking brutes with shields, but there are also boss fights in Matterfall and these sometimes call for a little extra firepower. One thing I did was use my special attacks, like the grenade launcher or special heat-seeking bullets to get the advantage. The other option I had was to go into overdrive, which freezes all enemies and triples my firepower.

But Housemarque wasn’t done introducing elements to the game. The last mechanic is the blue ray (I’ll avoid any “blu-ray”/Sony jokes) that was my secondary weapon. Well, it isn’t really a weapon, though I could use it to explode enemies that were frozen with the dash move. The ray is typically used to manipulate the environment for platforming. Certain walls and platforms can be materialized using the ray, though they only last for a few seconds, meaning l had to move quickly or risk taking a long fall. 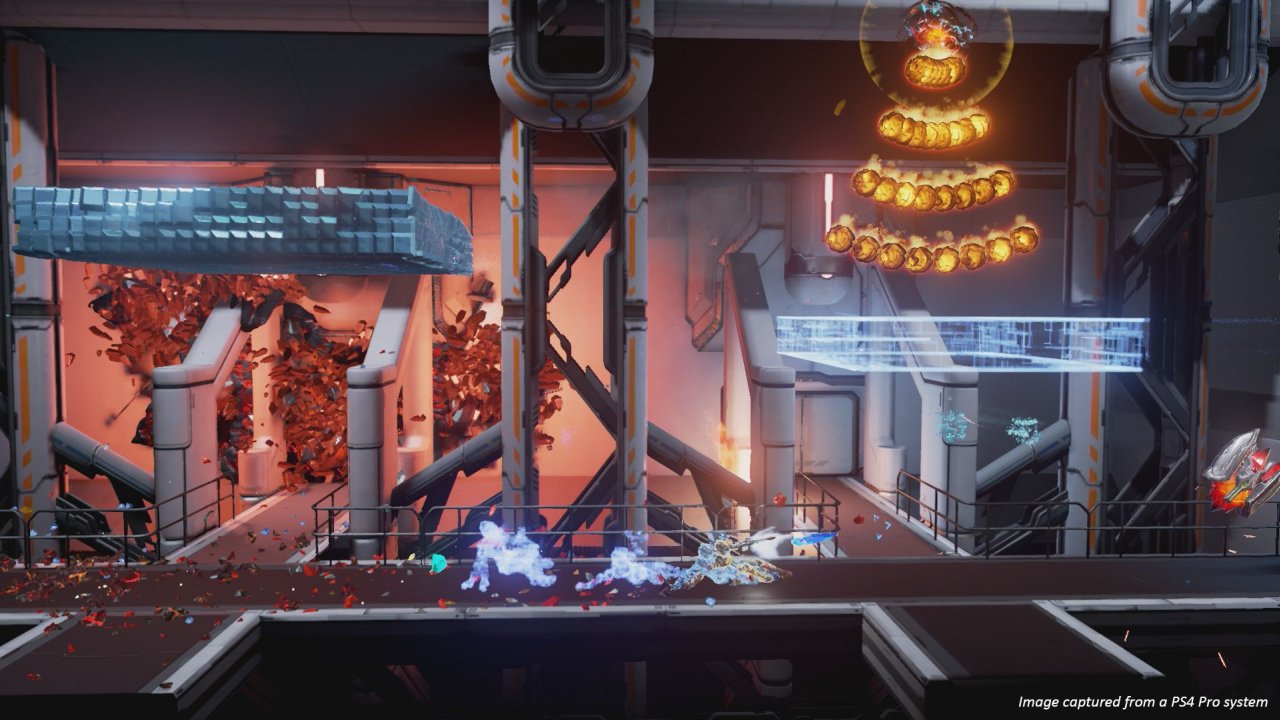 I could also use this secondary power to explode debris throughout the level. This debris can sometimes hold power-ups for health and weaponry; other times it will hold the humans I had to save (another Resogun parallel).

In fact, the deeper I got into the demo, the more the Resogun comparisons stuck out to me. After a while, instead of having single enemies waiting for me, a horde would spawn all around in bullet-hell fashion, forcing me to strafe and shoot in a style very similar to the space shooter. The explosive chaos has all the blues, greens, and oranges that evoke the visual style of Resogun as well. It’s a visual treat, but also one for the ears as well. Electronic music throbs through the experience, adding to the thrill of the spectacle.

There were also times when the game switched from a 2D platformer into a floating shooter, as I entered zero-gravity areas and had to fly around. The basic mechanics were the still the same, as used the dash move to freeze enemies and shoot them down, but of course the movement of the character felt completely different.

As I progressed through the demo, I ran into checkpoints that saved my progress, however there still was a life system that was tracked. When my lives were depleted I had to start the level over again and lost my checkpoint progress. Again, I could feel the blend of arcade and more traditional contemporary action-platforming. This also carries into the score that is tracked in the corner of the screen. 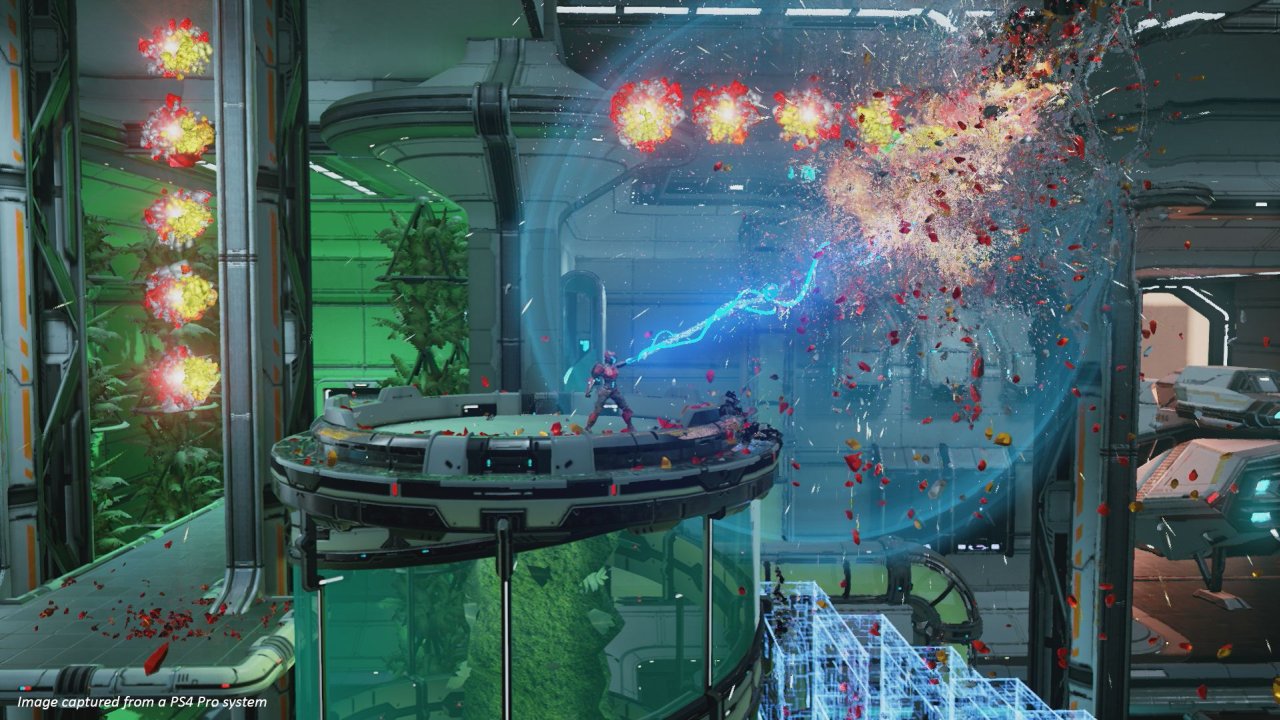 I’ve made the comparisons to Resogun, but 2D action-platformer style also reminded me of the Mega Man X, with its fast-paced action and sci-fi aesthetic. I don’t think the blend of arcade action and 2D platforming is a revolutionary take on the medium, but it’s intriguing when done by a veteran studio that has a history of excellent gameplay. For anyone who is familiar with Housemarque and Resogun in particular, this is something worth following.

Matterfall will be available August 15th on the PlayStation 4. 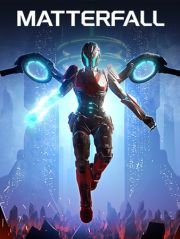 All videos for Matterfall (3)
Advertisement ▼