The shooter franchise returns to its roots, and we get a first look and hands-on time

We’re going back to where it all began. After years of moving through the armed conflict timeline of our world, the Call of Duty went through its modern phases and into the future. But this year, the shooter franchise is going back to World War 2 with the straightforwardly titled Call of Duty: WWII. It will surely be a drastic departure from the recent few games in the series, and their very sci-fi styles. But, if the competing Battlefield 1 was able to succeed, so can Call of Duty. We had a chance to see a presentation about the game and go hands-on with a few rounds of multiplayer at E3 2017. 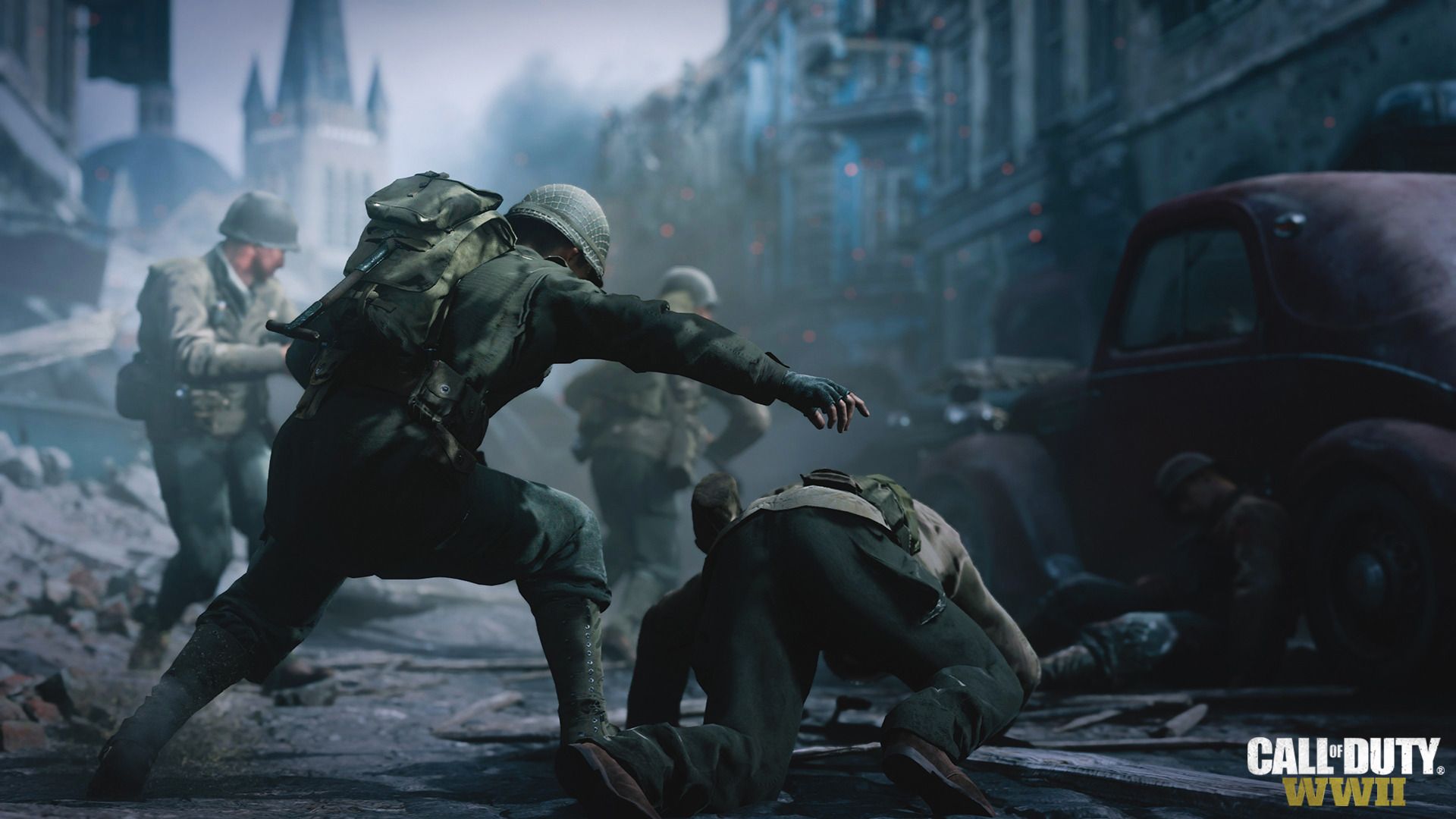 Up first was a pre-recorded gameplay video presentation, introduced by the founders of Sledgehammer Games. They spoke about their passion for the series, and how they helped the franchise leap into the future with Advanced Warfare, and can now take the series back to World War again. The game takes place primarily between 1944-45, and players will assume control of Private Daniels, who just happens to get his first taste of combat on D-Day. From the urban locations to battered open fields, the game will span a number of locations, and our particular demo took place about 7 weeks after D-Day as the Allies were pushing through France. The goal was to take a fortified church in the middle of town, and then destroy the AA guns that were hammering the Allied airforce. The demo jumped right into the action, with the squad taking fire from all angles.

Making our way through a series of streets and into collapsed buildings, we observed some of the new mechanics. A new health system does away with regeneration, and you must instead rely on medkits to stay alive. One source of medkits can be your own squadmate Zussman, who just happened to be a medic; we watched Daniels ask for health and get a pack thrown his way, which he then applied. Our other squadmate was a spotter named Pierson, and his abilities would come in handy later. As the trio (and some other Allied forces) pushed through to the church, we observed a bunch of different guns in action, from the M1 Garand to the Grease Gun, to the Kar98K sniper with and without scope. Through the chaotic action, the music was appropriately intense and mostly instrumental, as opposed to the techno-heavy beats of the latest futuristic games.

The squad fought its way to the church, where an armored vehicle with a mounted gun was blocking the way. To approach, we had to use a smoke grenade to block visibility, and having picked up an MP40, cleared out the remaining enemy forces. However, reinforcements were on the way, so the natural thing to do was to use the mounted machine gun against them. There was some environmental destruction as we blasted bullets through some walls and cover spots. We then entered the church, but an MG was on the second floor. We had to flank it to take it out, using a grenade launcher attachment. Then, a flamethrower carrying enemy appeared, and we had to crawl around the church to also flank him and shoot his tank. Finally, we made it up to the top of the church. 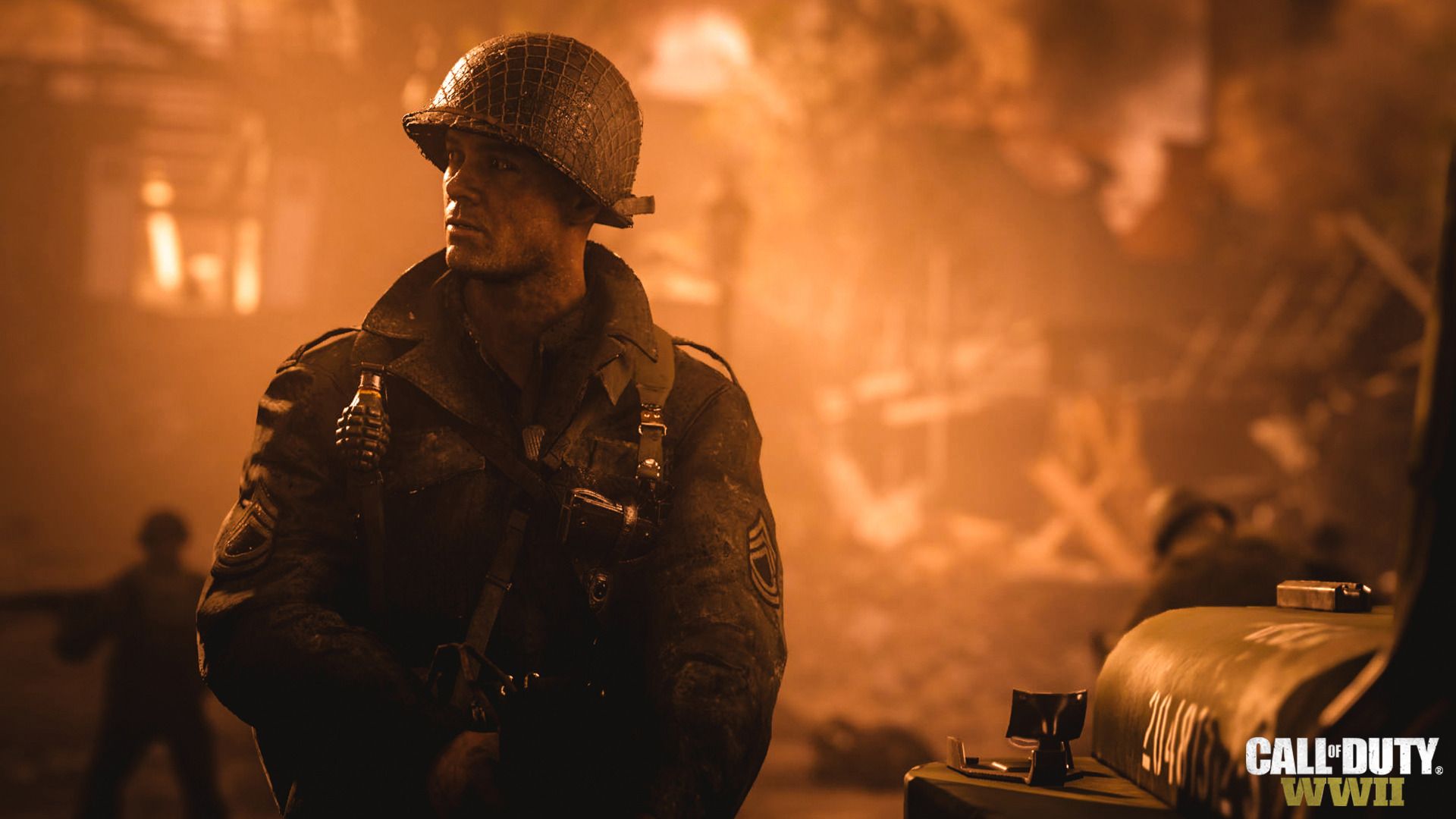 With the position secure, we could now provide cover for our teammate on the ground who was going after the AA guns. We used the sniper rifle to provide cover, and asked our spotter teammate to provide intel. This initiated his ability, giving us a chance to see enemies via highlighted silhouettes in the distance. With AA guns taken out, it was time to leave, but an airstrike hit the church head-on. An action sequence that followed consisted of desperate leaps and drops in an effort to escape, as well as QTE prompts to dodge the collapsing debris. Though we managed to escape, others were not so lucky. The game notably features plenty of gore and body dismemberment, both in campaign and during multiplayer, particularly from explosions. Having made it out of the church, the video came to an end.

Next up, we got some multiplayer hands-on time with the game. Prior to setting out on our team deathmatch, everyone had a chance to look through the new class system. The game will feature multiple divisions – airborne, infantry, expeditionary, and mountain among others – each offering a unique division skill and training. The skills range from using suppressors to deploying bipods, or using incendiary shells; the training includes specific passive abilities. Of course there are also kill streaks, which include a care package, artillery support, or a mortar strike. As you’re deciding on your division, the game has a very cool feature where pressing the touchpad would put you straight on the firing range, so you can test out your guns, and jump right back to menu. With all players ready, we kicked off our round.

The first map was TDM on Point Do Hoc, a medium sized map that was all about trench warfare. There were plenty of hiding spots, and moving fast through the linear trenches was both exciting and deadly. Gameplay and shooting certainly felt like Call of Duty of the past era, but obviously tweaked and refined. It’s still the fast paced, low time to kill shooter, but without all the jetpack dodging and flying of the few previous games. The guns felt solid, with tons of recoil on the sniper rifles and difficult to control submachine guns; my division skill was ability to attach suppressors on some of the guns. The minimap also now shows when your teammates are shooting. The round went back and forth, with our team eventually losing a very close battle. You can also switch up your division at any time during the round while waiting to respawn. 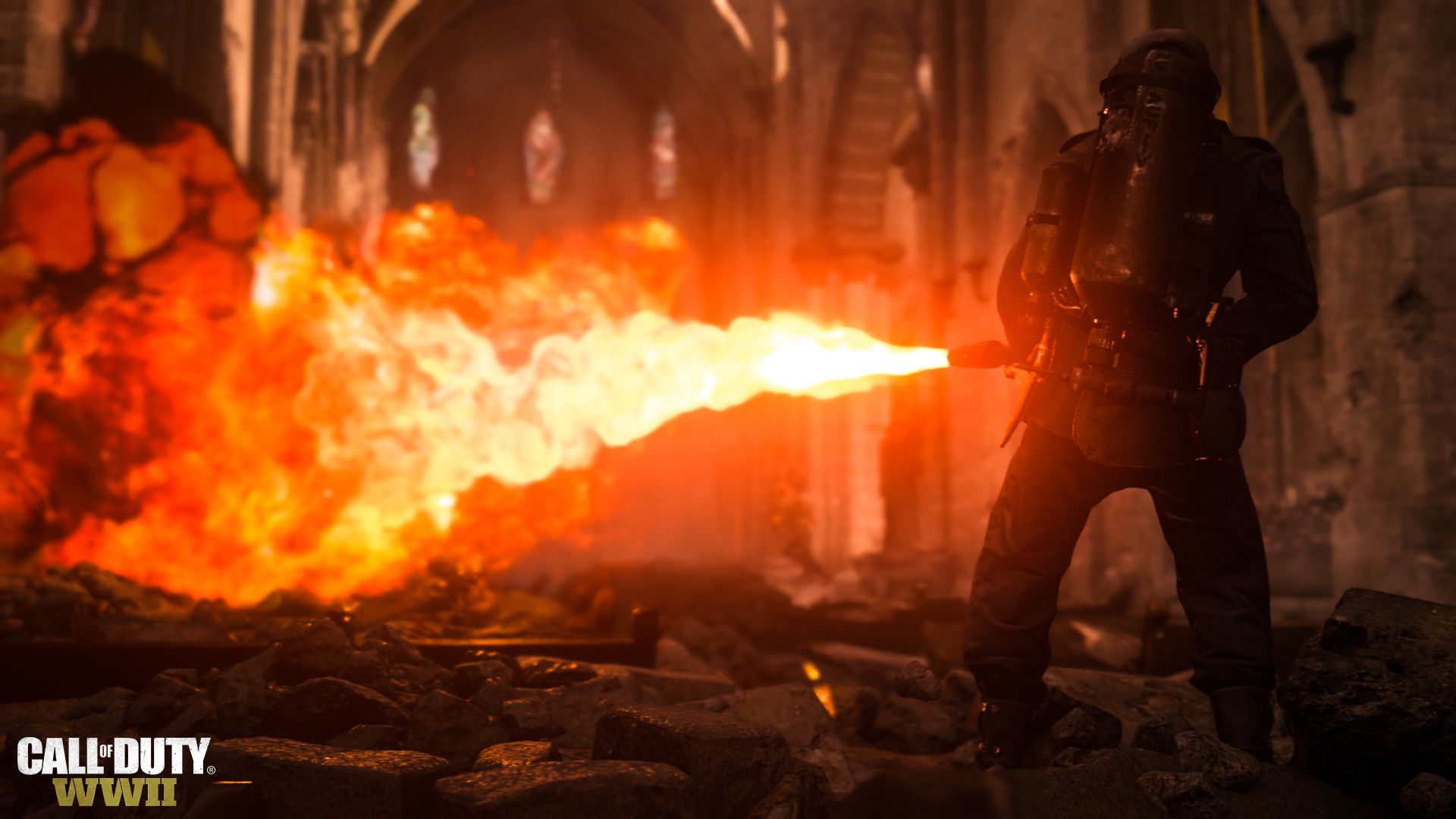 Next up was Domination on Ardennes Forest. This map was rather small, with not much room to maneuver and plenty of quick and deadly encounters. Both teams constantly dashed between the capture points, hoping to avoid contact and steal the area for their team. This led to higher number of shootouts, but also left little room to strategize as the map had very few alternate paths. So it was a relief that our third match was the most interesting part of the demo. We got to check out the War mode, on Operation Breakout. This mode is a multi-phase battle that pits the two teams against a series of objectives.

In the first phase, my team was defending a capture point in the embassy from the incoming enemy team who was trying to take it over. The game features a timer and certain number of respawn tickets, so the attackers must push forward with pace, and defenders cannot undo the capture once it happens. Despite thinking my team could simply camp on defense, we were quickly pushed out and the enemy took the point. We had to fall back, or risk being killed for being off-limits on the map. The next phase was a bridge, which the enemy had to manually construct, and we had to prevent them from doing so. Again, it would seem that the defending team has an advantage and could just pick apart the enemies from afar, but this wasn’t the case. After throwing bodies to the bridge, the enemies learned that using smoke grenades was extremely effective, and they eventually managed to complete the bridge just in time for the timer. The third phase, the enemies had to plant an explosive at a specific location. They do so very quickly, but the defending team still had a chance as we could defuse it. We failed to do so however, and the match advanced to phase four.

In this final phase, an Allied tank appeared for the attacking team, and had to be guided forward by having the team be in proximity (think of the cart in TF 2 or Overwatch). My defending team fought valiantly, and though the tank was able to get very far into the map, we held them off. The enemies continued to utilize effective smoke grenades to cover their advance, but eventually the tank would roll back if it was unsupported. The entire round took about 10 minutes, and at the half the teams would switch sides, though sadly we did not get a chance to try as attackers. This War Mode was certainly a very enticing offering. While it may not offer anything drastically new for the greater shooter genre, it’s certainly something new for Call of Duty and for fans that are looking for a more complex multiplayer outing. 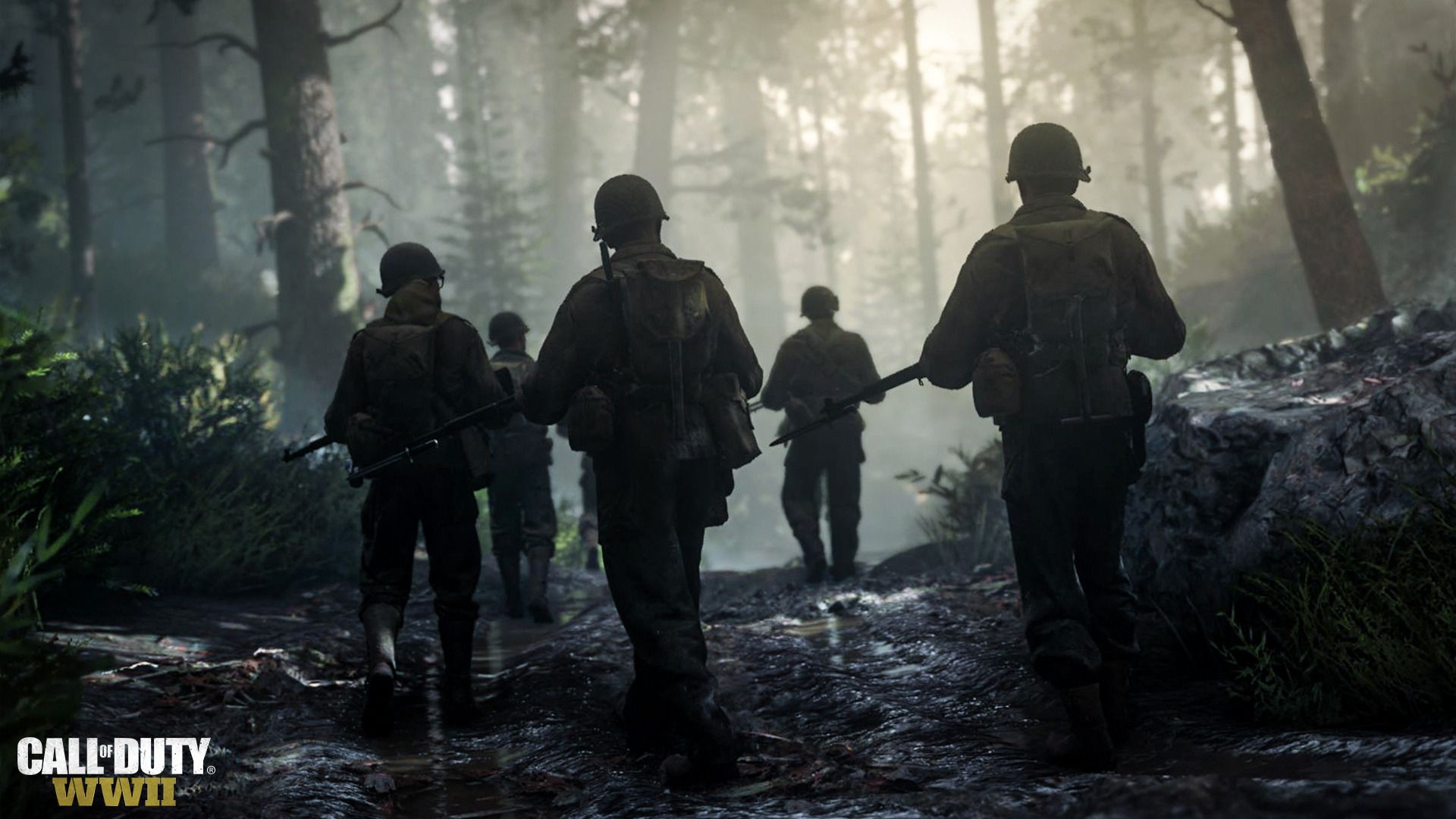 With the return to World War 2, the franchise hopes to recapture the enthusiasm that the fans had for the earlier games. Sledgehamer Games are clearly committed to an emphatic and authentic experience, with a high attention to detail and new levels of grit and gore. The action remains fast and loud, and the campaign is likely to deliver plenty of exhilarating moments. In multiplayer, the return to a slower paced and delicate shooting is bound to please fans that have had enough of the superjumps. The War mode, along with other revamps in multiplayer, will also bring some variety and depth. Call of Duty: WWII is coming to PC, Xbox One, and PS4 this November 2017.

All videos for Call of Duty: WWII (8)
Advertisement ▼