The future belongs to robots and hi-tech concepts, many of us believe. How long until they become commonplace? How long until they become a fully integrated service in society? These sorts of lingering questions are often answered in sci-fi works, and the upcoming game Detroit: Become Human from Quantic Dream offers one such scenario. In the near future, androids have become the primary manufacturing and service sector workers in the city, leading to an extreme unemployment for the humans. This causes plenty of tension between the two sides. Now, to complicate matters, some of the androids have become so called deviants, gaining free thought and some ability to express emotion. We had a chance to learn more about Detroit: Become Human at E3 2017. 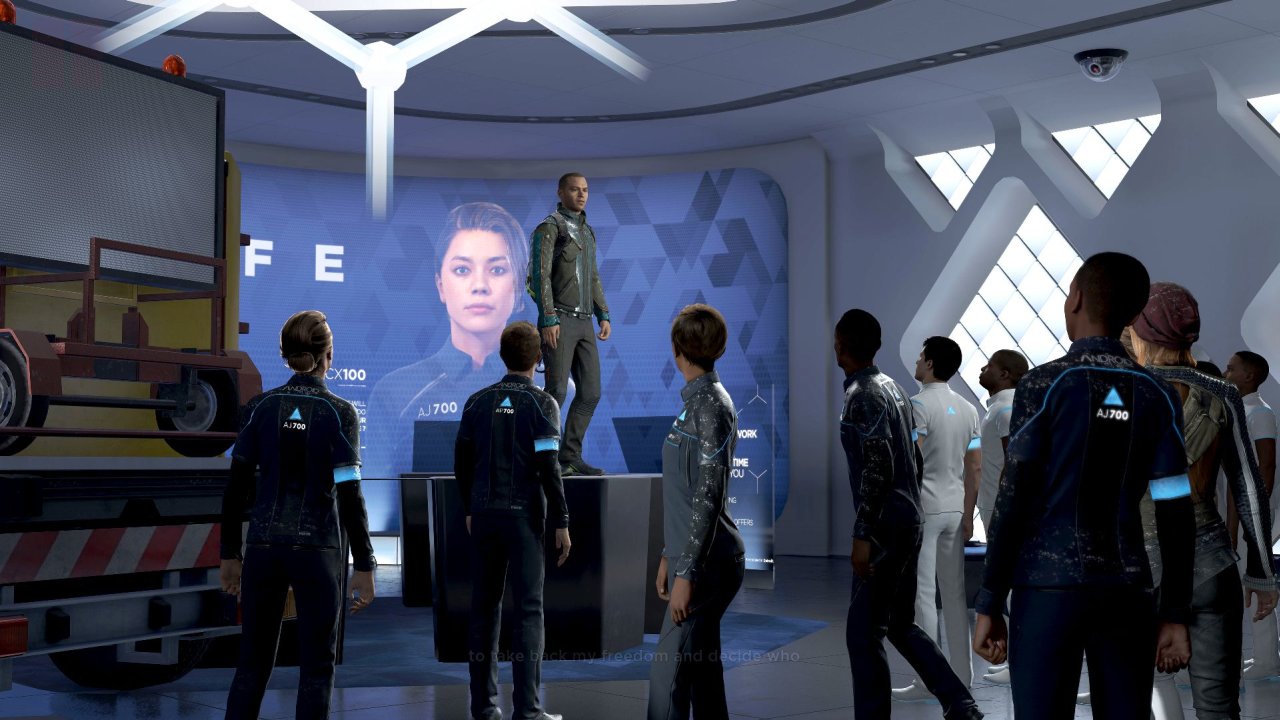 In the theater demo, we were given an extended look at the gameplay scenario that was first seen at the Sony PlayStation E3 2017 press briefing, but with an alternate outcome. The demo starred Marcus (played by Jesse Williams), the third and final playable character to be revealed, and his partner North. He’s a free thinking android, and a leader of an underground resistance against the human control. Our mission scenario was to free a group of androids on display at a Cyberlife store, where people can purchase them for whatever means they wish. Arriving at the plaza of the store, Marcus is free to walk around and explore the area. The goals are prominently displayed by the UI: search the area, and get into the store. The goals are further broken down into specific objectives, such as disabling the security. Using the “mind palace” ability, a special vision mode, we can observe all interactive objects in the area. We look into the store through the window, and in first person view we find the security camera and hack it remotely. This leads us to highlight the underground wiring, and follow it like a trail to an exposed pipe that two androids are working on. Here, Marcus uses his ability to free their minds, and tells them to return to the base.

After disabling the camera, a security drone just happens to be flying by. At this moment we must make a decision to hide or run, before Marcus is spotted. It’s a timed choice, of course, to add tension. We choose to run, and are spotted, which ends the mission. The developers will hope to account for all scenarios, so this outcome will have consequences later on. But, to give us a better look at the mission, the demo is restarted and we successfully hide from the drone. Marcus feels it’s better to get rid of it, so we analyze the drone to reconstruct its flight path. In a scene reconstruction, players can forward/rewind the scene, and we use this information to spot a location where the drone will be reachable from some scaffolding. This time, we analyze the location to preconstruct the action. This is also a timeline, where players can see how their actions will playout depending on choices made. Marcus could climb the scaffolding in a number of ways, but only one will put him at the right height and timing to reach the drone. With the path confirmed, we execute the scene, and take out the drone. 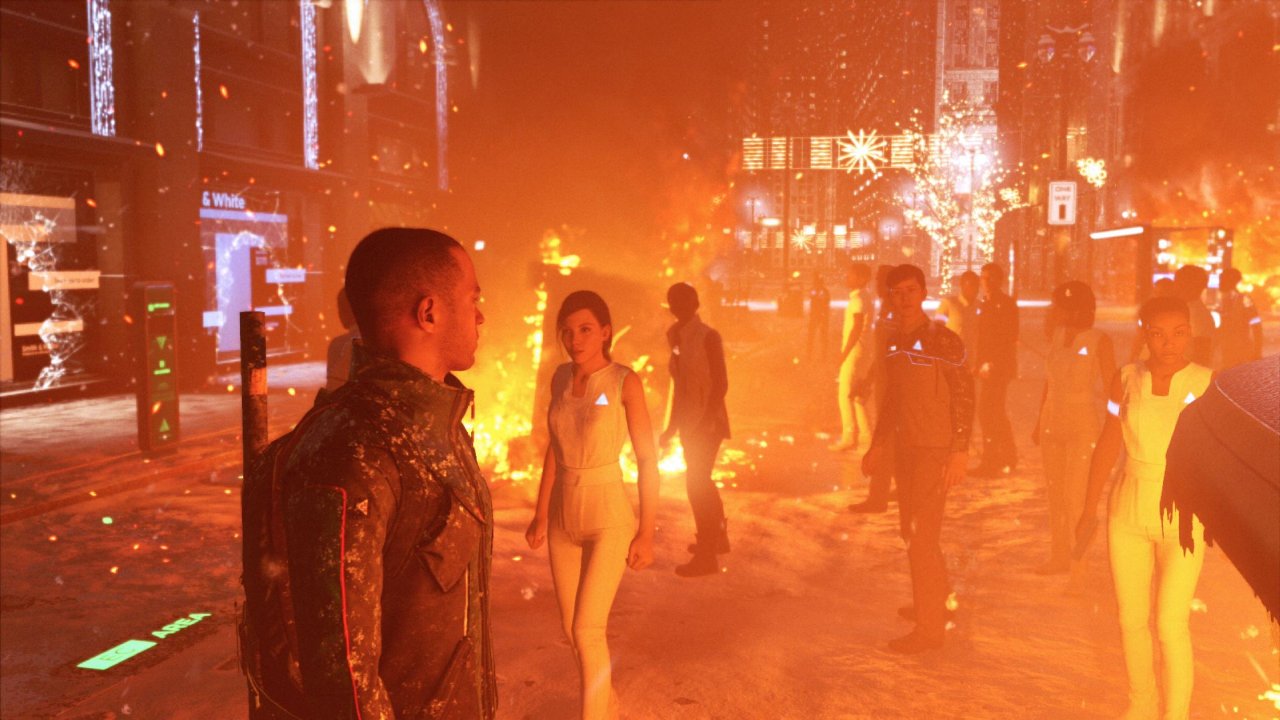 With the area secure, that objective is complete. Now, to actually get into the store, Marcus steals a truck and rams through the front. North has a disappointing realization that her look as an android is not unique, and others just like her are being manufactured. The two of them proceed to awaken the androids in the store, and give them freedom of thought. Marcus takes this opportunity to rally them and offer a choice to join his revolution. They agree, as in the trailer. Marcus also wants to leave a message for the humans, that the revolution is very much in progress. The group proceeds outside, where Marcus has a few different items to interact with – cars, a statue, store windows. You can either be peaceful and spray-tag these objects, or go for a violent approach and break/burn the square. The group of newly freed androids follow your lead; in our demo, we chose the violent path, overturning and burning cars, and destroying property. There is a meter that indicates if Marcus leans towards violence or pacifism, and of course the scene put us into the far end of the violent end of the meter. Leaving the square, we are presented with many dead androids, killed by cops that are now surrounded, and the demo ends on Marcus facing a decision on what to do next.

Following the presentation, we also had a chance to go hands-on with the game and try out the scenario that was first shown last year. We took control of Connor, as he arrived at a police standoff at the top of an apartment building. Connor chatted with the commander in charge, and we were given up to four different conversation subjects to talk to him about, with limited time to decide. We then explored the apartment – using the fairly standard third person view. Interactive objects required us to use the classic Quantic Dream inputs, such as rotating the analog sticks, pressing buttons in sequence, and holding them down. We had a look at the dead body in the living room; using the investigative first-person view, we scanned his injuries and got enough clues to reconstruct the scene. Using forward/rewind of time, we established that the man was shot, and was holding something. We looked nearby and indeed found the electronic tablet with information. In the hall, we saw an empty gun container. Once again investigating it, we were able to deduct a reconstruction, that the culprit somehow knew of the weapon and took it right from the storage closet. In the victim’s room, the little girls’ belongings were scattered, and we also learned that she did not hear the gunshots. The game displayed the possibility of success after each successful interaction, bringing the chances of peaceful resolution higher. We decided to guide Connor outside, despite still missing a few clues. 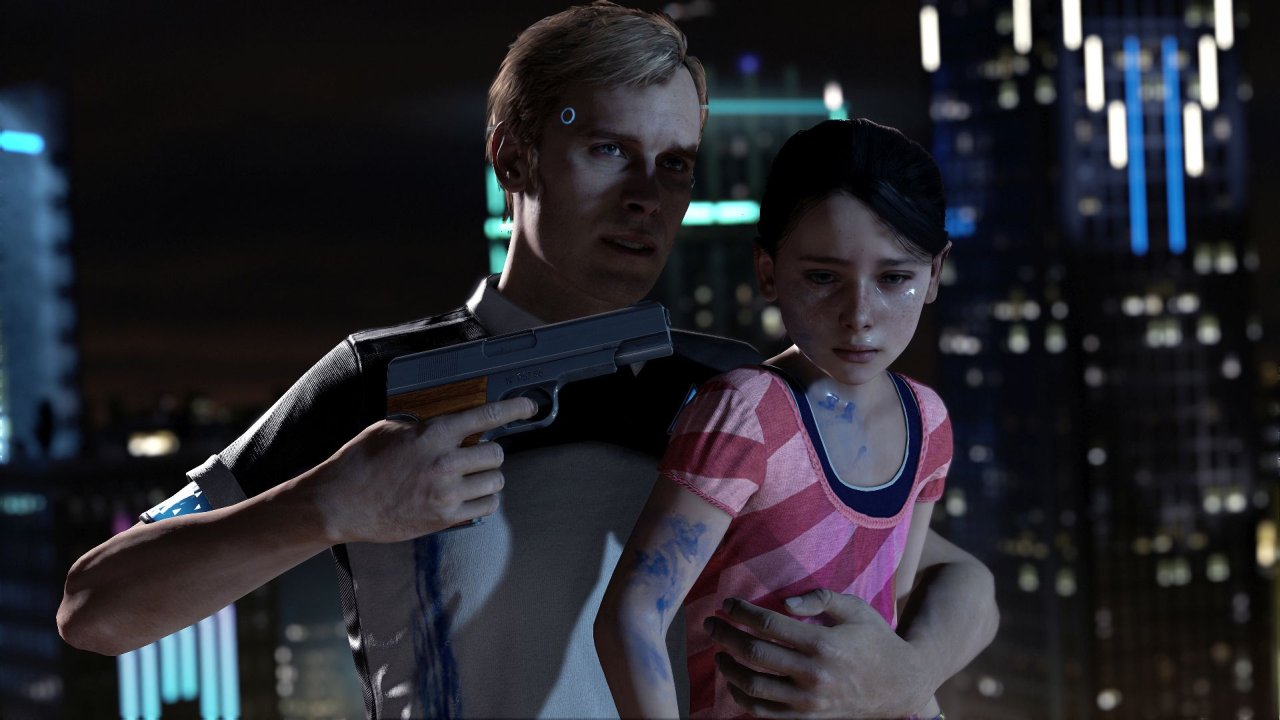 Here, we meet the kidnapper, who is threatening to kill the girl and/or leap off the building. We start by giving him our name, and from there the player can choose to slowly approach the man, while also chatting with him. The choice to simply silently walk forward is dangerous, causing the probability of success to drop sharply. Connor can engage in conversation with the man at any time, and a few different things to speak about. You could try to reason with him, convince him to release the hostage, or play it more aggressively. Some conversation subjects are locked depending on you discovering all the information in the apartment. The android also asks you to get rid of the helicopter, to which you can comply or ignore. Having finally made it close, in our first demo the man did not feel a connection to Connor, and decided to leap off the building. With a QTE event, Connor is able to save the girl, but he himself also fell. We quickly replayed the level to get a few different outcomes – Connor manages to talk down the man, but he is shot by the police, and an outcome where everyone lives.

From the presentation and the gameplay demo, it is clear that Quantic Dream are sticking to what they are well known for – interactive stories where player choice is at the heart of the experience. There’s plenty of drama and action along the way, and probably many reasons to replay and see how things could turn out differently. The futuristic setting is interesting, the visuals are quite impressive already, and it seems everything is in place for the game to succeed. If the team can avoid the narrative pitfalls of their most recent entries and return to the high bar set by Heavy Rain, players should be in for a great adventure. Detroit: Become Human is coming exclusively to PlayStation 4, with no release window currently announced.