A heartfelt adventure worth taking

For those who aren’t familiar, the creator of Rakuen is Laura Shigihara, a YouTube personality and video game composer who is best known for her work on the score for Plants vs. Zombies and To the Moon. While Shigihara has primarily worked as a composer for the better part of the past decade, Rakuen is her first attempt at developing her own project. I have to admit, I was skeptical about how well the transition would work for the composer-turned-developer, but color me impressed as Rakuen is one of the better games I’ve played this year, and the most emotional video game experience I’ve had in some time. 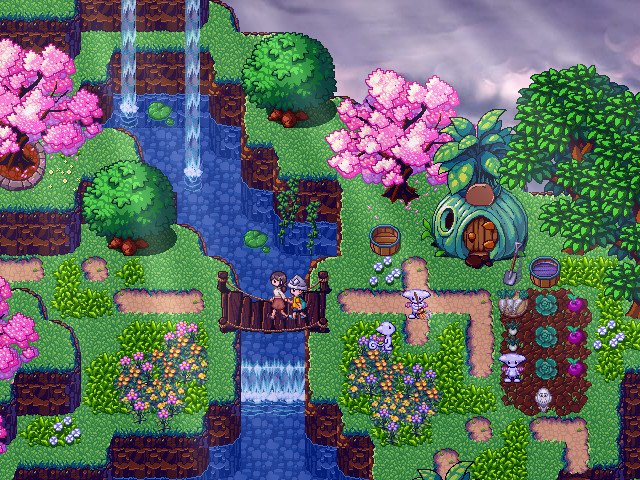 For some, I could imagine Rakuen’s occasionally fluffy dialogue and cutesy art-style being somewhat off-putting, but I would encourage you to stick it out because there’s something more mature and interesting brewing beneath the twee shell of the game. For every pink colored, monkey-like Leeble, there is a poignant moment where the game addresses pain and loss in relationships.

Shigihara initially seems to be covering previously-explored territory. There’s certainly the JRPG aesthetic from To the Moon, which is somewhat unavoidable given both games were made in RPG Maker, but the gameplay in Rakuen is much more substantial. And while the litany of plots revolving around a child’s imaginary escape from the consequences of real-life trauma extend around the block, like Ni No Kuni or The Unfinished Swan or Papo & Yo, Rakuen is one of the few to really stick the landing. That doesn’t mean there aren’t some issues along the way, but trust me when I say the ending of Rakuen is a heckuva thing and you owe it to yourself to see the game through.

That probably won’t be too hard because it’s not an overly-long game. Clocking in at about 7-9 hours, Rakuen tells the story of a boy stuck in the long-term treatment ward of a hospital and his mother who comes to visit him. After being cleared to venture throughout the hospital floor one day, the boy (we’re never given his name) discovers that his favorite book, Rakuen, has been stolen and goes looking for it. When he finally finds the book, taken by a scrappy hobo, the boy is told by his mother that the fantasy world described in the book is real and if they travel there they can ask a powerful forest spirit to cure the boy and allow him to go home. 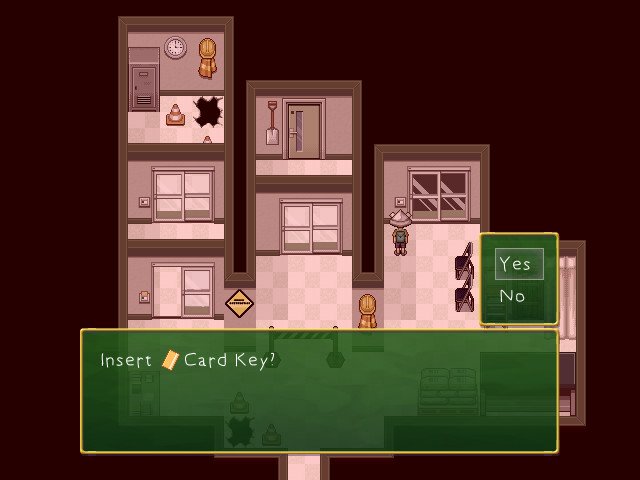 Unfortunately, the forest spirit is asleep and in order to awaken the spirit, the boy and his mother must adventure between this new fantasy world and the familiar hospital to help the wayward souls that populate both. Some people might see where this is all going and find it a little too on-the-nose, which would be understandable if Shigihara wasn’t so good at the execution.

The dialogue between the boy and his mother can be a little too perfect sometimes. The mother really does have all the answers and their conversations can be a little syrupy sweet. However, her presence throughout the game lends itself thematically to the story and gameplay in a great way. You can talk to her as much as you want, but simply having her around - occasionally butting into conversations when they might go over the boy’s head - is a nice touch. But the real treat is in the writing of the rich world Shigihara has built - and I mean both the whimsical fantasy world and mundane hospital. Both are filled with interesting and fun characters that resonated deeply as I played. The best is when the boy and his mother are forced to serve tea at a glamorous party attended by high-society flower buds and eavesdrop on their conversations - here you get to know a rapping flower bud, named Lil Budz, and the overly excited Sugarbaby. In the real-world hospital you’ll meet a girl who sees little planets in her marble collection and a mischievous man who digs holes around the hospital.

The writing isn’t always award winning, but it works in service of the game. This might be because Shigihara knows exactly when to lean on the dialogue and when to change things up. There are times when simply exploring the world is interesting, and other times when the music and songs are what carries the narrative. Rakuen almost feels like a musical with how many songs and how much music fills the playtime. In fact, with so much music – the tone really shifts when there’s nothing but silence. 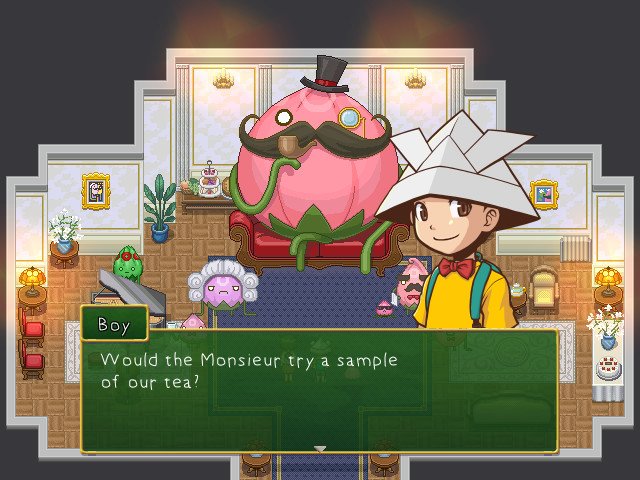 That might be where the game’s greatest strength lies. Unsurprisingly, as a composer, Shigihara has stuffed the game with a phenomenal score that helps bring the world to life. The melodies nimbly shift between plucky, upbeat overworld tunes and pulsing undercurrents of noise for the scarier moments. It also works so well because the world itself is fun to explore. I’ve already mentioned the vibrant fantasy world and washed-out hospital wing, but at times the game shifts to almost an in-between dimension that feels the most surreal, where the secrets of certain characters come to light; a truly unnerving location. The way the game employs the color scheme to distinguish between these locations would be enough to impress, but there are also little unnerving changes throughout the world as you begin to piece together the puzzles of the past. The assets of RPG Maker are limited, so the fact that Rakuen can separate itself so definitively from the pack is remarkable.

The puzzles, which make up the bulk of the gameplay, are pretty good. There’s nothing that is going to leave you stumped or frustrated as most of the puzzles are pretty tame, but they’re still satisfying to solve. Rakuen subscribes largely to the adventure game school of design, so you’ll spend your time wandering the word, finding people who need something, find the thing, and bring the thing to the appropriate person. It sounds monotonous, and it would be if the surrounding elements didn’t support it so well. There’s also an interesting blend of Western and Japanese elements at work. The design screams that of an old school JRPG (again thanks to the RPG Maker engine), but the gameplay feels Western with its point-and-click adventure game mechanics.

At times, the pacing feels a little weird, but mostly that’s because Rakuen begins messing with its formula about halfway through the game, changing where the puzzles occur and how they relate the central plot. It works in keeping the game engaging, but it also makes the gameplay feel a little front-loaded. Rakuen almost feels like it is rushing to get to the ending, which isn’t the worst thing, but it adds to the pacing issues. 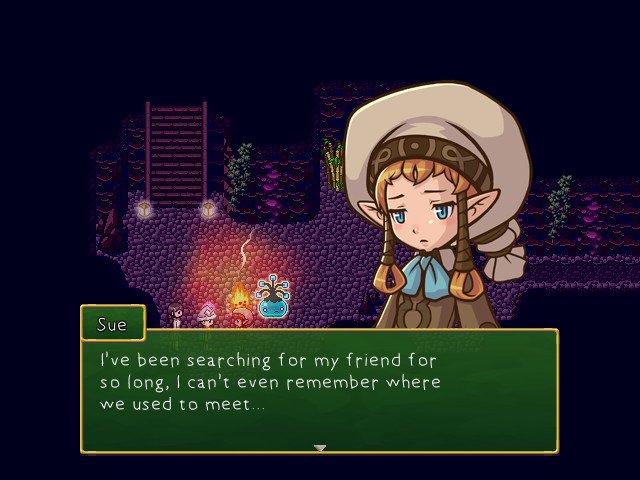 More importantly, moving around the world doesn’t handle very smoothly. The boy always tends to walk a little longer than you wanted him to and the movement has a bit of that 16-bit slide to it - as if the characters are on ice skates. Further mucking up the gameplay is that the game doesn’t employ your traditional mouse and keyboard design control scheme - instead largely relying on the keyboard arrow keys, space bar, and the escape key. You can use the mouse, but you definitely don’t want to use the mouse. You’ll probably adjust to the controls after a bit, but it’s certainly off-putting as you become familiar with the game.

Rakuen is a small game, without huge ambitions, and that’s what largely allows it to work so well. Its modest design allows Shigihara to do what she does best and prevents the shortcomings from really getting in the way of the overall effort. This is also true of how the game runs. The bells and whistles are limited, but it was a solid game with no bugs or issues. Nothing to write home about, but again, it keeps your focus where the game wants - on the world, story, and characters.

The gameplay of Rakuen is hit and miss, but it’s not often that you’ll find something as genuine as this. This feels like a product of love and something that is purely the vision of a single creator - which is rare in games. Shigihara’s influences are so clear, the blend of Western and Eastern game design so effortlessly interwoven, her musical roots worn upon her sleeve - all of this make Rakuen something that is fresh and smart. I think if you give Rakuen and chance, it can win you over - and once it’s done that, you in for a powerful experience.

Our ratings for Rakuen on PC out of 100 (Ratings FAQ)
Presentation
90
It’s impressive how much Rakuen does with the RPG Maker engine, and what it lacks in visuals, it makes up for with a fantastic sound design.
Gameplay
67
The puzzles work in the game’s favor, but movement and pacing get in the way.
Single Player
84
The dialogue can get a little too on-the-nose, but there’s so many likeable characters and such a fun world, I fell in love with it.
Multiplayer
NR
None
Performance
(Show PC Specs)
CPU: Intel Core i5-3570K
GPU: Nvidia GeForce GTX 660
RAM: 8GB
OS: Windows 10 Home 64 bit

75
There’s nothing fancy about Rakuen’s tech, but what is there works well.
Overall
83
It may have some flaws, but Rakuen really is an adventure worth taking. It successfully executes on modest heartfelt ambitions, and perfectly captures the vision of its creator - a rare occurrence in modern game design. 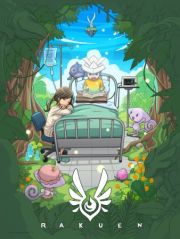 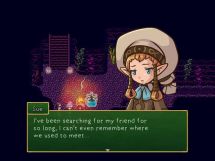