A 'lost' shooter that perhaps should have stayed that way

For better or worse, I spent a lot of time playing classic shooters growing up. As a pre-teen, titles such as Quake, Doom, Unreal and Hexen were favorites that I probably shouldn’t have been playing at my age. Nevertheless, I did, and they had a large role in shaping my tastes going forward. Flash forward 21 years, and after many evolutions to the FPS genre, the retro shooter Strafe has arrived to drag me back to simpler times. 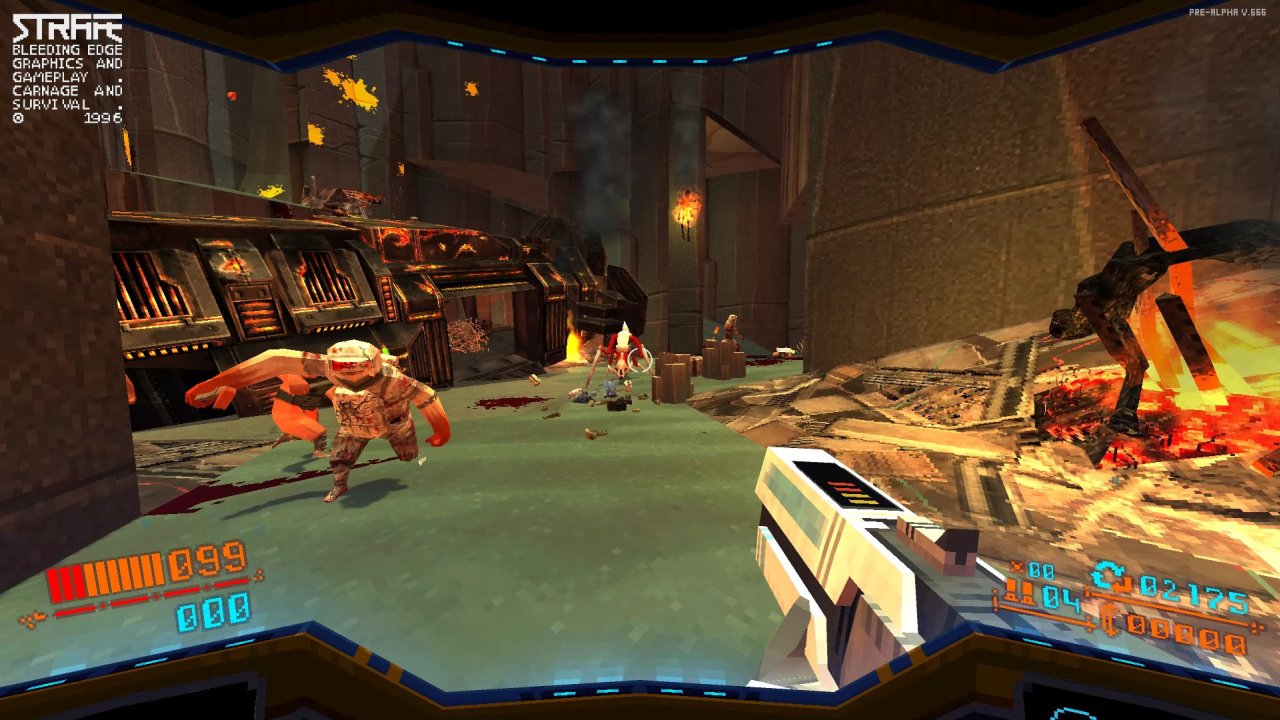 Successfully funded on Kickstarter a few years back, Strafe is billed as a lost, mind-blowing shooter from 1996. Developer Pixel Titans has done an excellent job of presenting the title as such, whether it is through cheesy live-action commercials or the eyesore that is the title’s official website. Like those who pitched in to fund the title, I was attracted to the projected precisely because of the retro aesthetics. While the title may look retro on the outside, the inner workings adhere a little closer to modern conventions.

Unlike the games it draws inspiration from, Strafe is not a straight-forward shooter. Rather, this is a roguelike, with all of the hallmarks on the genre on full display. Crushing difficulty, a non-existent progression system and randomized levels are a few of the traits you’ll find here. To clarify: I don’t have a problem with roguelikes, and I’ve put many hours into the genre in the past. However, I think Pixel Titans might have made a mistake going that route.

I hate to call a game out for being difficult, because I don’t want this to be interpreted as someone whining about not being good, but Strafe is the wrong type of challenging. The challenge doesn’t come from smart A.I. or devious level design. Rather, it comes from the sheer amount of enemies the game constantly throws at you. Honestly, the foes are straight-up dumb, and are content with running straight at you with no concern for their well-being. You don’t have to worry about being outsmarted, only overrun. 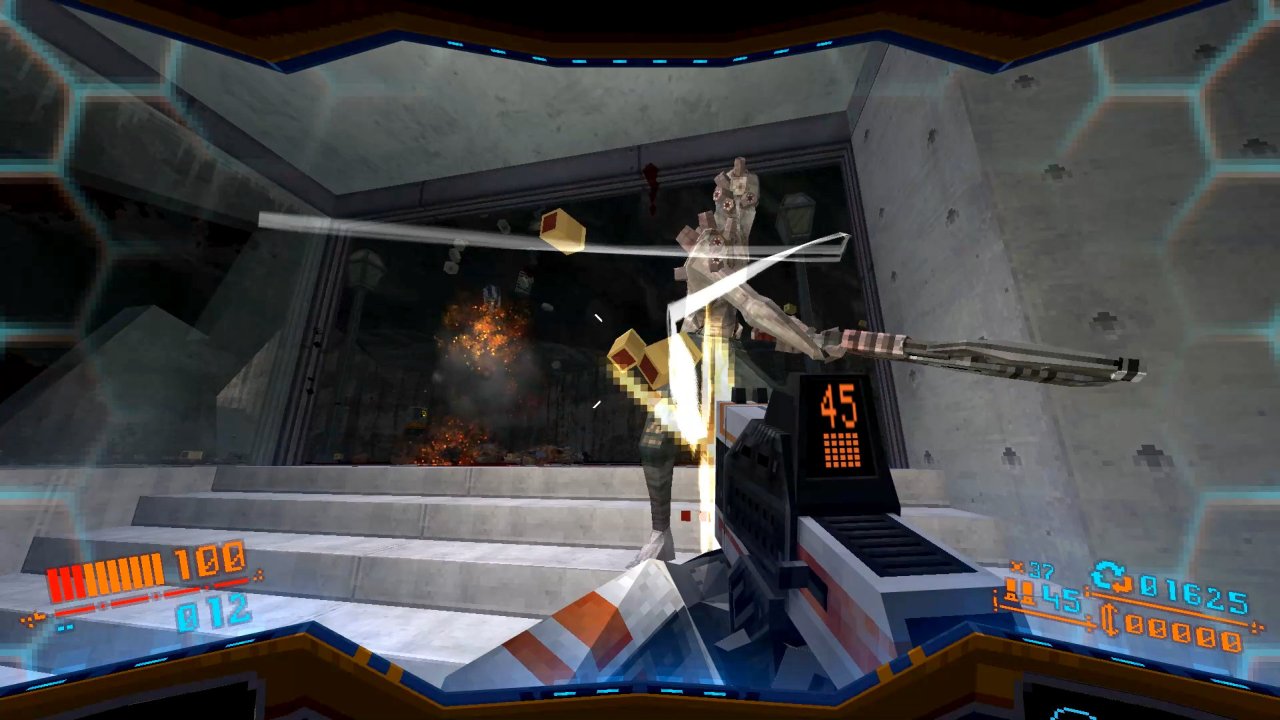 I’d be more okay with fighting off hundreds of foes if Strafe played fair with how they appear. While you’ll find most of these enemies standing around waiting for you, a good lot of them tend to pop out of previously walled-off rooms. The problem with this approach is that, at least as of this writing, enemies don’t make any noise when they are moving. This lead to me frequently getting beaten down by creatures that spawned out of rooms I thought I already cleared out. It frankly boggles my mind to think how this game was released with as little enemy audio as there is in the game. I’m assuming this will get patched in a later update, but for now, it makes the game a chore to play.

The sound snafu is emblematic of the biggest problem Strafe faces: it’s kind of a buggy mess. I don’t think I had a single run in the game that didn’t feature some type of technical issue. The most common one is the frequent lag that tends to pop up even in low action sequences. The first time it happened, I honestly wasn’t sure if it was done on purpose or not. Once I came across other bugs, though, such as pieces of the environment disappearing and enemies shooting me through walls, I realized that was not the case. Hell, the game crashed the first time I booted it up, so maybe I should have taken that as a sign.

The biggest issue I came across, though, was the important benches found in the game not functioning correctly. Benches are craft tables where you can trade in collected material for either additional ammo or armor. In a game as challenging as this one is, it’s kind of important to have the option to do this. However, they don’t always work when you need them to. Sometimes the benches just won’t work at all, and other times they will take your scrap, but never deliver the item. This is an important component of the game, and the fact it doesn’t work 100% of the time is a major flaw. 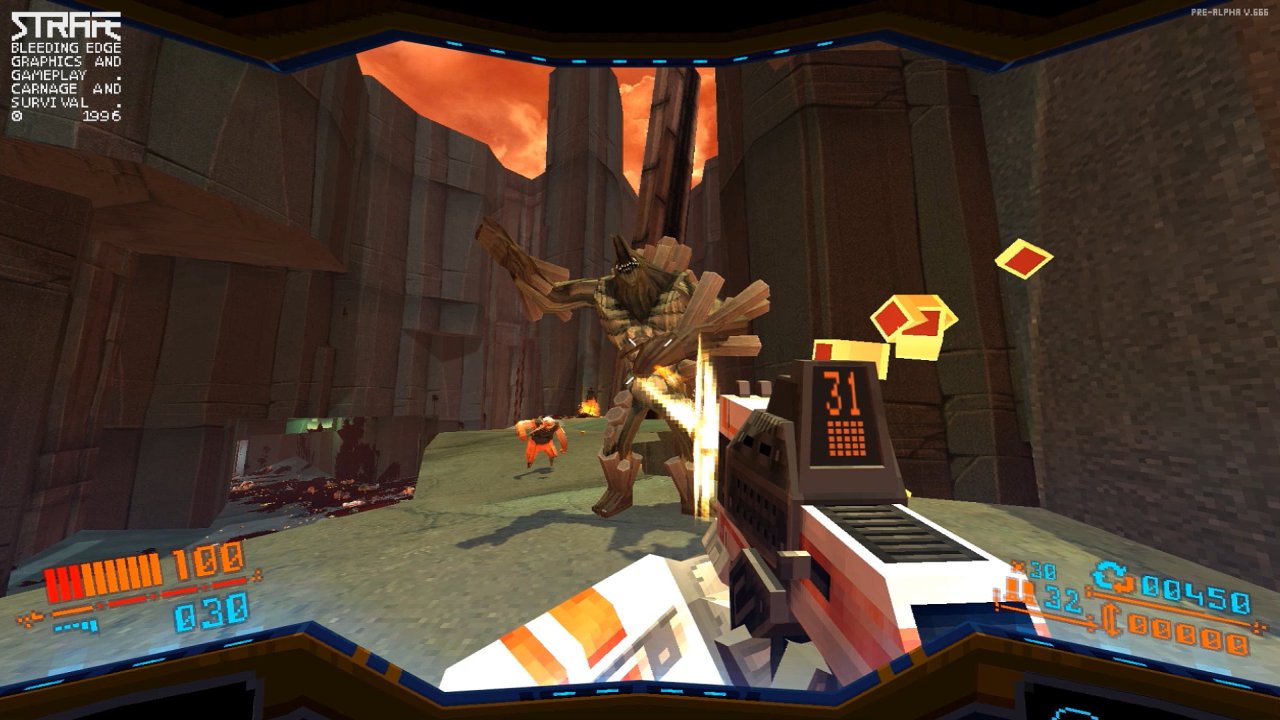 Going the roguelike route also damages the level design of Strafe significantly. Classic shooters were known for their extensive and excellent levels. Veteran designer Richard Gray is known as The Levelord precisely for his work in Duke Nukem 3D. Having strong level design is a key success, and an area in which this game fails. The levels are never technically the same each time through, but the same core pieces pop up in each of the areas, so they never seem that different from each other. The first main area of the game, the Icarus, is hit particularly hard by the shoddiness of randomization. It’s cramped, bland level design that leaves a terrible first impression. Things pick-up once (or if) you make it out of the ship, but the levels never manage to come close to those found in the classics.

The weapon selection also pales in comparison to shooters both old and new. At the start of each run, you’ll get to select one of three guns: machinegun, shotgun or railgun. Each one has two different firing types, with the secondary attack being more powerful, but using up more precious ammo. Each of these weapons can also be upgraded using certain machines found in-game. You’ll also come across various other weapons during a run, but these pick-ups only have a limited amount of ammo. For a game that claims to be as absurd as it does, the weapon selection is surprisingly pedestrian. There’s nothing special about what you can wield here, which is disappointing. The included weapons don’t feel particularly gratifying to use either. There’s no oomph to the bigger guns, like the rocket launcher or shotgun, and the lighter weapons feel comically weak.

Most of my time was spent with the main campaign, but there is another mode included. The Muderzone (great name, by the way) is a wave-based bloodbath that, like everything else in the game, is randomized every time you enter. It’s a nice diversion, but it too also suffers from frequent lag and slow down. 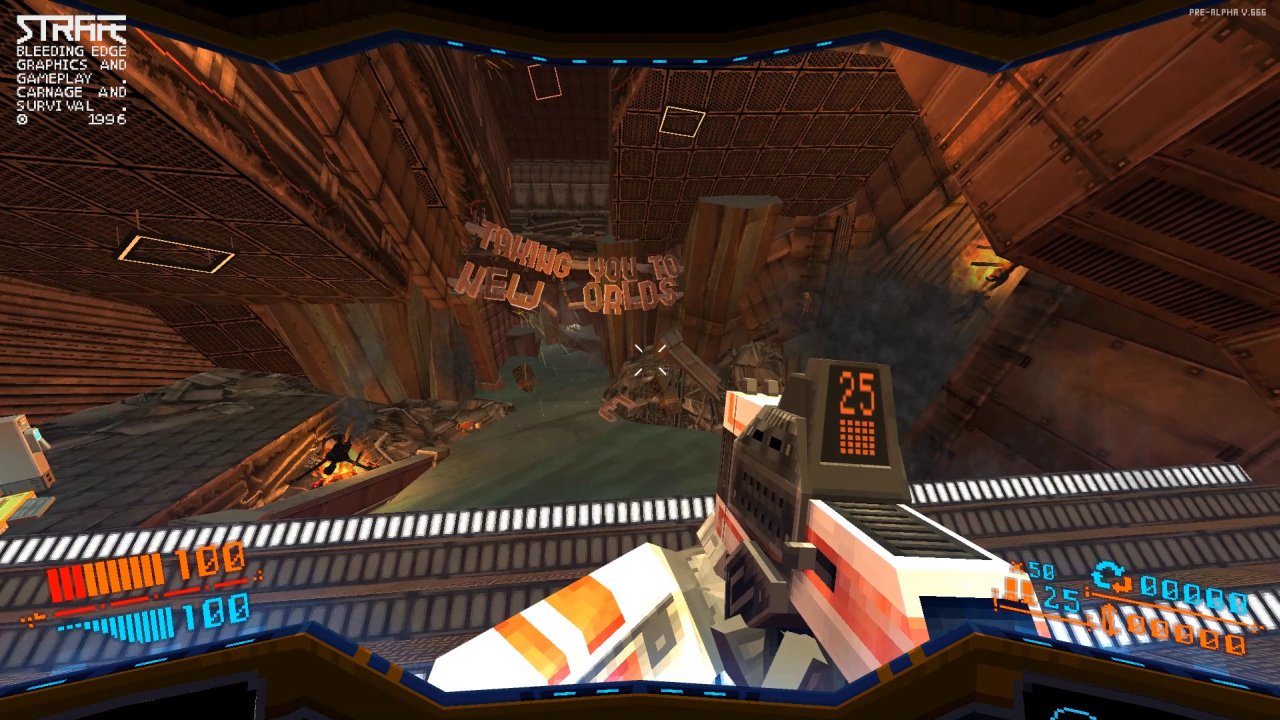 Not everything in the world of Strafe is terrible, however. While I’m not sure the basic 3D and clunky look of the game will appeal to everyone, I rather liked it. The visuals do a good job of looking old, but somehow still feeling modern. And while the sound effects leave much to be desired, I did enjoy the soundtrack quite a bit. The fast-paced electronic music perfectly fits the frequently intense action of the game.

It frustrates me that Strafe is as broken and unfulfilling as it is, because I genuinely think it could have turned out great. Pixel Titans did an excellent job of visually aping the classics of the 1990’s, and the FMV sequences they have churned out are a delight. As I stated before, though, the decision to make the game a roguelike led to many of the problems it has. It’s way too difficult for its own good, and the lame weapons and dull level design don’t make the challenge worth slogging through. Even if all of the bugs in the game are cleared up, I’m not sure that would make it worth checking out. You’re better off dusting off one of the classics, and letting this “lost” shooter from 1996 stay that way.

Our ratings for Strafe on PlayStation 4 out of 100 (Ratings FAQ)
Presentation
40
The vintage look of the game won’t be for everyone, but as someone who grew up on it, I liked it. While the electronic soundtrack fits the mood excellently, the lack of enemy noise is a big problem.
Gameplay
44
There’s nothing wrong with the run and gun gameplay taken by itself. It’s factors such as the lackluster weapon and level design, and the adherence to ill-advised roguelike trappings, that drag the experience down.
Single Player
50
With basically no story to speak of, the amount of enjoyment you get out of the game will vary from run to run. The upside to having no real story to follow, though, is that each playthrough of the game can feel at least somewhat different. It would have been nice to have a few more modes included, however.
Multiplayer
NR
None
Performance
38
Strafe is savaged by technical hiccups, no matter what you are doing. Crippling lag, missing art, brain-dead enemy A.I. and broken features make the game feel like one of the sloppiest PS4 releases in recent memory.
Overall
42
Strafe has the look and style to stand out, but Pixel Titans should have been focusing on making sure the game was not only fully functional, but actually fun to play, as well. 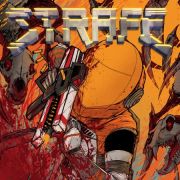