If you go back and read my review of Destiny, you’ll find that I wasn’t very kind to the game’s Strike Missions. I found them to be long and grind-y, offering little reward for the amount of time one might have to spend on them. So when I found that I would have multiple sessions with Destiny 2’s campaign and PVP during a preview event, and only a single session with the new Inverted Spire Strike Mission late in the day, I wasn’t too heartbroken. 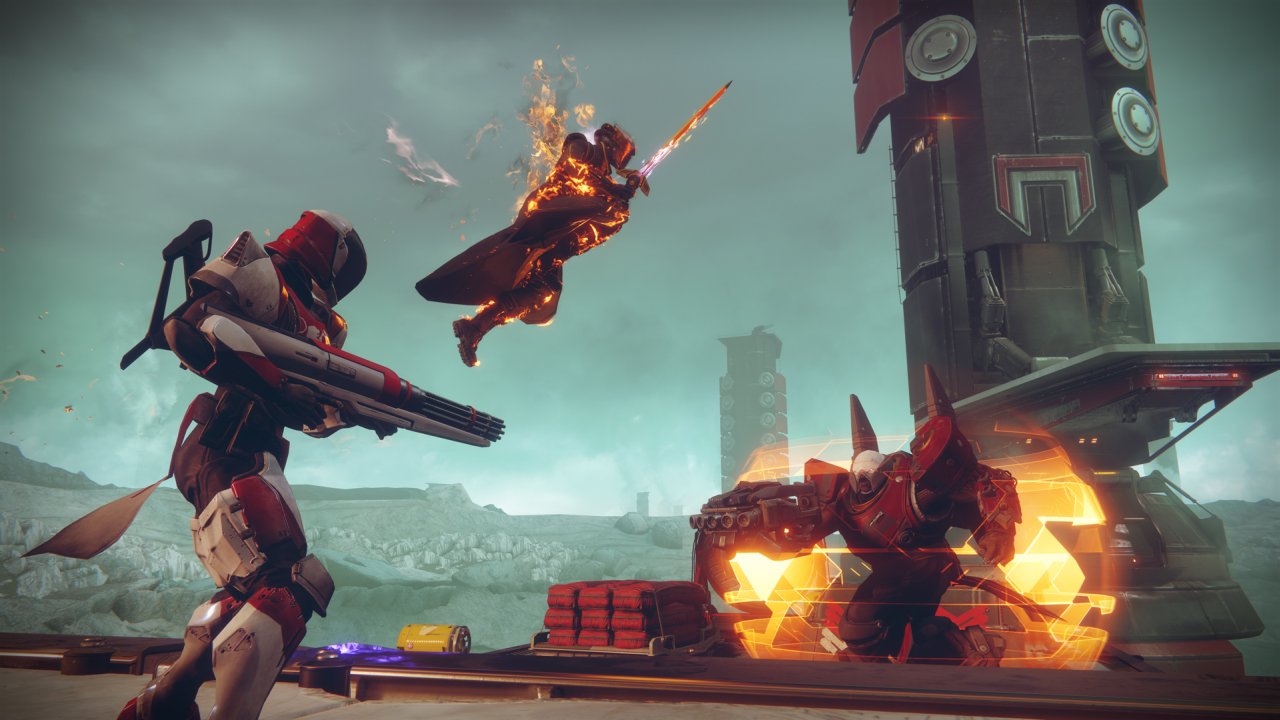 But now, I’m am a little sad I didn’t go out of my way to try and do multiple playthroughs of the strike mission. As Destiny released more DLC and continued to evolve itself in the years since initial release, the level design has consistently improved and a lot of those improvements can be felt in the new strike mission that I got a chance to go hands-on with. For the strike, I find myself playing the Hunter Gunslinger class as we prepare to fight through a strike mission on the Centaur planetoid Nessus (real thing, check it out).

The set up for the strike was still the same as the original Destiny. A quest-giver barks out orders, with a couple of side characters filling in the silence with dialogue. For this mission Zavala (the blue-skinned awoken with that silky smooth voice you saw in the original teaser trailer) would be giving the orders, with Ghost (voiced by Nolan North) and an AI named Failsafe (a seemingly new character) chiming in on occasion. While most of the character work throughout the strike was being done off-screen, the dialogue feels a little lighter than the original version of Destiny. It’s something that I picked up during the gameplay reveal as well. It feels like Bungie is shifting the tone a bit from the lore-heavy somber effort of the original game to more lighthearted fare. The dialogue is snappier, with Ghost playing the scaredy cat sidekick and Failsafe sounding like it would fit in nicely with the Portal 2 cast.

As the opening briefing is given, the two other members of my fireteam are bouncing down a series of rectangular rocks and right into the fray. The enemies all look pretty familiar here, mostly we’re squaring off with various Cabal and Vex soldiers, who are executing the same tactics any previous Destiny player would be familiar with. The big, brutish Legionary rush into the battle while the more powerful Vex hang back. I immediately flank around to the side of the Vex and take them out while my teammates create a diversion up front.

I’m using the Scathelocke auto-rifle, with a Sunshot hand cannon and the Naddodd-D grenade launcher. It’s not my favorite loadout of the day, but it does the trick. The Scathelocke has decent distance, but it almost feels like I’m shooting spitballs, chipping away health and waiting for a teammate to deliver the finishing blow or killing enemies who have already had the majority of damage handled by someone else. The Sunshot can do more damage, but it feels wildly inaccurate as soon as I’m more than a few meters from target. And lastly, the Naddodd-D grenade launcher is my power weapon, best used for crowd control as I soon find out. 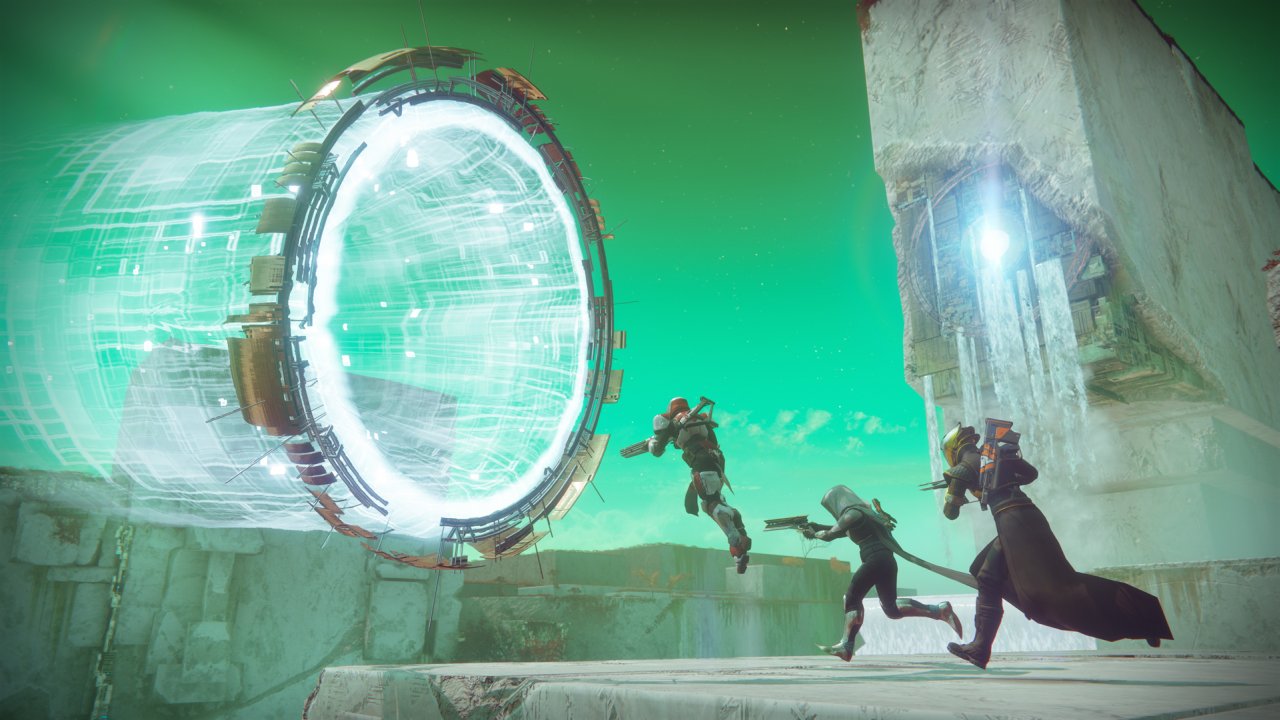 We quickly traverse a series of floating square platforms hanging in the air and drop down into a dark cave. It’s here that we run into our first bit of trouble. When players fail to traverse these platforming sections, they respawn back at the start which forces others to wait or press ahead on their own. So we wait a minute or two for our other team member while they (more carefully) hop from platform to platform. Then we are propelled across a huge chasm by a launching device and continue into a series of dark caves.

The Vex are in force down here. Two snipers are firing at us from a distance, and I let my teammates who are equipped with sniper rifles of their own handle that issue, while again I begin to flank my way around the enemy. Soon, two team members are down and my flanking maneuver is feeling foiled. That’s when I pull out my Naddodd-D and start laying waste to the masses of Vex, finishing off a couple with the throwing knives that are my melee attack. Soon their numbers are whittled to only a couple of enemies and I get some space to revive both teammates who help clean up the rest of the Vex in the cave.

As we come out of the caves, there is another series of large rectangular platforms that we have to leap across, however this time we’ll have to do it under fire, as snipers are trying to pick us off from afar. I leave them to my teammates, while I focus on getting in closer where I can do more damage. It’s here that we run into an unexpected issue: fall damage. As my teammates and I descend through the series of platforms, we continue to lose large chunks of health to fall damage. Eventually we realize we need to make sure we’re at full health so we don’t die from the fall, or use our boosters late in the jump to make sure we slow our descent. I’m pretty sure we all died once, simply from the fall damage.

Once we’re back on solid ground, we find ourselves traversing a large barren landscape, filled with craters that can be used as cover, but can also hide enemies. This area feels larger and more expansive than anything I remember in the first Destiny. The three of us separate and are pushed together pretty naturally as we flank enemies and maneuver around their shields. Our objective is to down two drill officers who are hidden inside two fortified areas. As we fight our way to the officers, drop ships deploy more troops into the fray and we assault them from all angles. As I find myself running out of ammo while taking down one drill officer, a teammate triggers their Dawn Blade ability and clears out the small stronghold. The first Drill Officers falls and the second one goes down quickly after that. 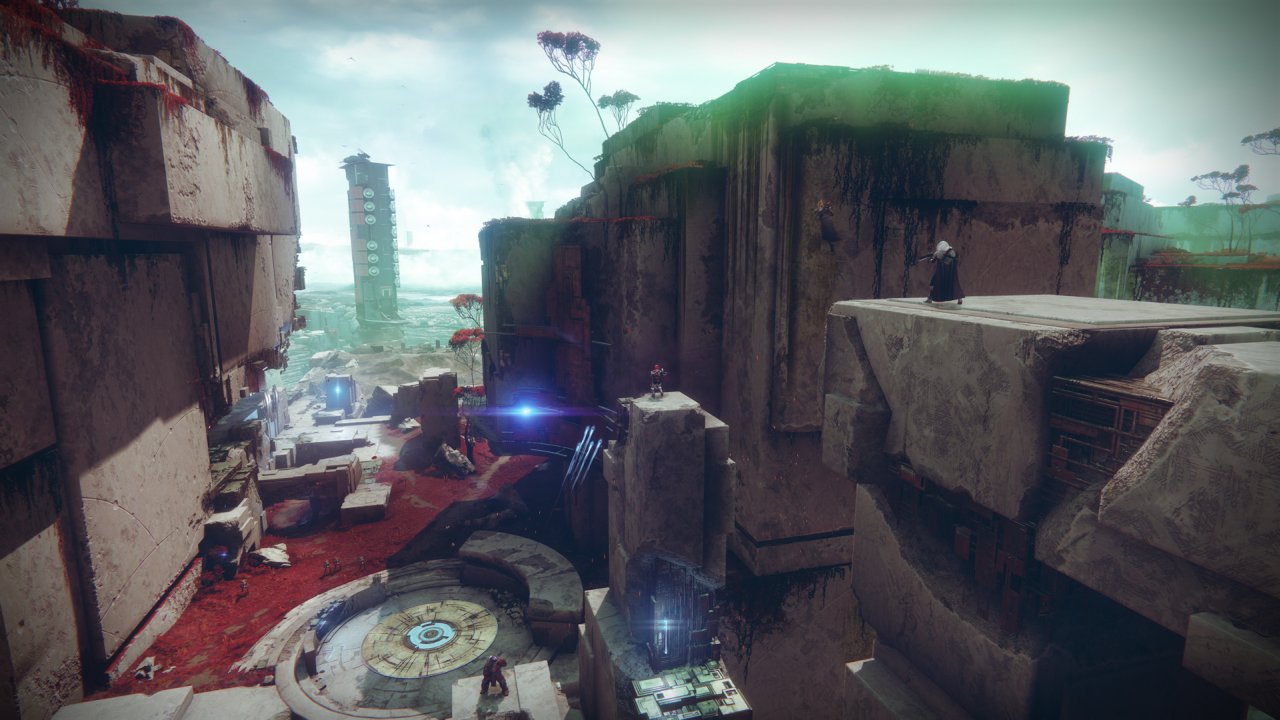 Using another launcher, we cross another cavern and board the Cabal drill. We quickly clear the platform and reorient it so that we can travel to our desired destination. While the drill reorients, we are forced to hold off waves of the Cabal. Mostly these waves are made up of the new Cabal enemies in Destiny 2 - the Gladiators and War Beasts. This is one of the more intense fights in the strike mission. I hold my ground for a bit, but soon I’m overwhelmed and jump into the air to get some distance between myself and the enemies. As I land, I unleash my Golden Gun super ability and start mowing down the Cabal. Again, my teammates are down and I make a desperate attempt to revive one. My health is low, so I anxiously wait for the revival to finish and then launch myself into the air. Once we’re all back on our feet we have the fight well in hand and clear out the remaining forces.

Now another launcher is activated and we’re leaping across another cavern and into a dark tunnel. There are more snipers and I help take them out this time, before leaping down into a large pit that is being carved out by a huge Cabal drill. There are multiple moving parts, each ending in what essentially looks like a circular saw, which swing around the rock wall of the pit. I don’t focus much on the menacing parts of the machine because I’m already under fire from the Cabal. It’s a rather impressive set-piece arena that Bungie has cooked up and while I never really feel like I’m in danger from the machine, it’s pretty bonkers to fire off grenades and machine gun fire while the behemoth of a drill is at work in the background.

After battling our way downward, we drop into an underground tunnel. Pushing forward, we come to a large square room with a chasm in the middle. Here we face the final boss, Protheon Modular Mind. At first it feels like a familiar boss fight from the first Destiny. Minions spawn, I try to keep my distance and slowly peck away the boss’s health - but once we have relieved the boss of about a third of its health meter, suddenly the floor drops away and we’re plummeting downward.

Now we’re in a new arena, this one circular, with the boss standing the center, spawning Vex who seek us out, pushing us from cover. But there’s plenty of places to hide here as I scavenge for power ammo and build up my meter to get some attacks that can do some serious damage to the boss. More fights pushed me to go airborne than I remember from the first Destiny. Very rarely do I remember a need to leap around in fights, but in my time with Destiny 2 it feels a like a necessary function of combat. 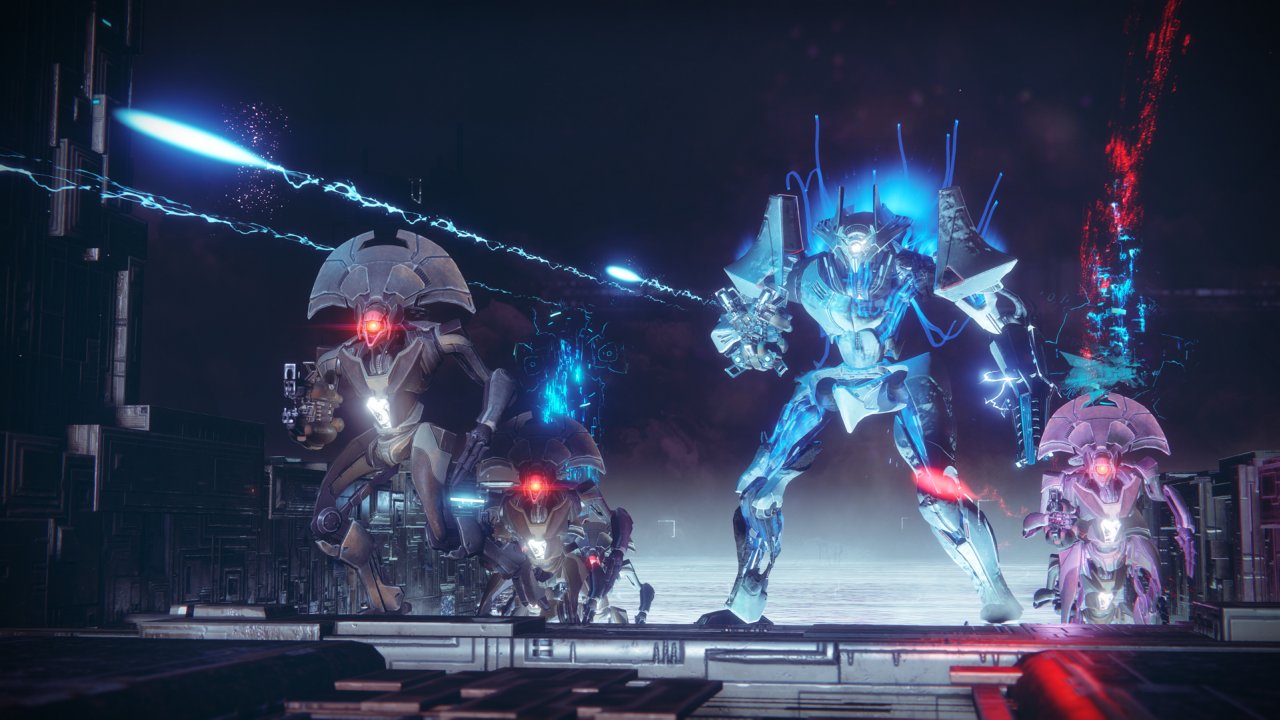 We’re still doing well as we wipe out waves of the minions and continue to drop the boss's health. However, there’s one more surprise left for us. After taking away another third of the boss's life, we drop to another arena. This one is smaller, with enemies spawning from outside the arena and rushing in while the boss wanders around, hoping to stomp on us. There’s hardly a place to hide from enemies, so I’m hopping about wildly, hanging in the air to shoot when I get the chance, and rushing to revive downed teammates as soon as I get room to breathe.

I toss a grenade at the boss and empty the clip of my grenade launcher - at close range to make sure I don’t miss - and that’s when it finally goes down. The boss is defeated and the Strike Mission is over. The fireteam and I remove our headphones and look at each with a little smile. One of my teammates raises his fist in the air and says “Worst team ever!”, jesting with a grin. It’s hard to judge our skill or Destiny 2 as a whole off of one strike, but I was impressed by how fresh it felt. As someone who didn’t love Destiny’s original strike missions, I found myself unexpectedly ready for more.

Destiny 2 will launch on Xbox One and PS4 September 8th, and on PC sometime thereafter. Read more about the game in our Campaign Mission preview and PvP Multiplayer preview.