If you’ve ever woken in the dead of night to your body playing digestive dubstep and wondered what on Earth is happening in there (because use-by dates are far too strict anyway), Plasma Puncher offers an interesting theory. It’s because your body is literally beating itself up to purge your contaminated bod of germs. Honestly, I wasn’t expecting white blood cells to look quite so endearing, but together with its solid control scheme and challenging, wave-based combat, Plasma Puncher’s gastrointestinal schtick ultimately compliments its straightforward, beat ‘em up format. 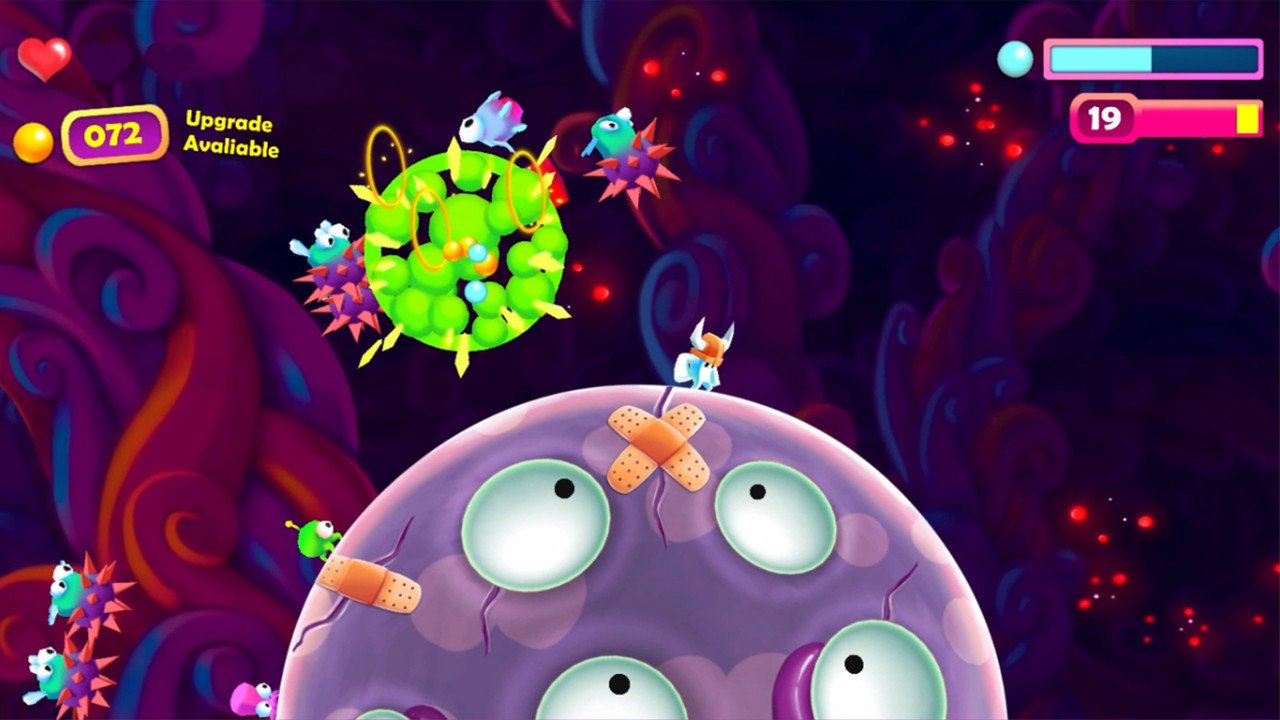 Plasma Puncher’s premise had me initially thinking back to those rad biology videos I was shown by admirably passionate science teachers during school. You play as a beefy, no-nonsense white blood cell, out to protect the blood stream from the dreaded lurgy. At the start of the game, you’re plumped right onto the surface of a ‘Big Bad Germ’; the googly, planet-like canker upsetting your host’s tummy, where you’ll fight wave after wave of lovely amoebas until the blood stream is secured. Level design is novel in that the game’s battle arena also happens to be its main boss, which – rather than attacking directly – covers its surface with waves of lovely amoebas for you to punch into submission.

True to its name, Plasma Puncher’s action revolves largely around jumping and socking your foes. You begin with three hearts, as well as a combat bar that gradually fills as you progress throughout each wave, flashing when you’re close to breaking through. The game only saves after each round is complete, and given your hero can be pulverised in only three hits, it’s often a welcome sight when you’re submerged in bacterial hell.

You’re also equipped with a plasma bar, which can be filled by punching the living particles out of the Germ’s microbial entourage. Accumulating enough blue particles charges a special-attack, allowing you to suckerpunch the Big Bad right in its germy face. Golden particles, meanwhile, can either be collected to provide a one-off heal during combat, or spent on upgrades to buff your damage. Upgrades are relatively basic, with increases to health and power-up length, as well as a few uninspired charge or dashing abilities. These can be accessed at any time during battle via the in-game menu, and occasionally come in handy for dealing the fatal flurry to break lengthier waves. More often, however, they’re little more than a novelty, and given the game’s focus on swift, responsive combat, standing about for a bit while charging your super-punch never feels quite as effective as the nippy one-two you begin with. Admittedly, I felt somewhat bad. It’s about the poorliest-looking creature in the game. 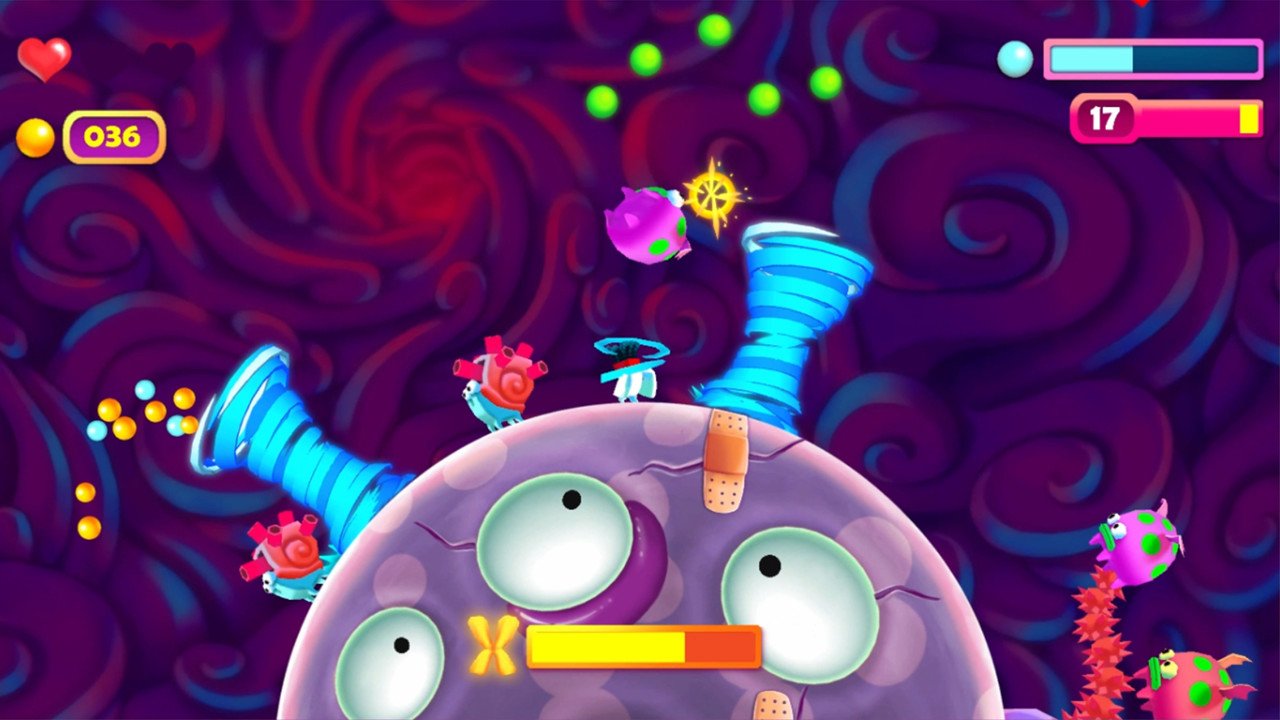 Don’t be fooled by its cute guise, however. Plasma Puncher is tough, and the Germ will take every opportunity to spell your molecular destruction. Each wave unleashes a host of enemy-types with their own, germy MO: where ghosts float overhead raining green gungeballs upon you, groundlings fling their tentacly bodies to keep you on your toes. Lone enemies are laughably soft (with many just standing there stunned while you pound them into sludge), but their tendency to spring up all at once means you’ll rarely stand still long enough to deal all your hits at once. Instead, swift decision-making and prioritising enemies is crucial if you want to survive, while alternating between blob-stomping and jumping to dodge incoming ranged attacks. Consequently, stages can be hair-raising, with some even teasing bullet-hell territory now and then. The jump function felt a little slack on occasion; I’d keep leaping clean over enemies I was trying to hit, only to land right in the middle of a ground-lurker’s hefty right-hook. But mostly, it’s a question of timing; knowing when to keep moving, when to jump and when to strike is part of the challenge – and controls are rigorous enough for deaths to avoid being written off as cheap. It’s playable on either keyboard or controller; though you might want to recalibrate if you’re used to standard console-controls, as the game’s unnatural default settings can cause some initial confusion.

Once you’re all adjusted, however, the simplicity is satisfying. Though combat itself rarely surpasses button-mashing due to a scant collection of attacks, the lack of variety is well made up for in the diverse armies presented in each wave. It’s not the most original format, but given a single hit sets you back a third of your health, it’s an effectively addicting one.

And the simplicity doesn’t just surface mechanically. The sunny palette and chubby, alien amoebas strike a goofy, early-console mascot vibe, though animates its goggly-eyed bloblings with sharp, modern clarity. The rotatable battle arena’s even got a slight, Psychonauts-menu vibe – albeit without the clutter of mental anguish. It’s heartening to see the focus is as much on having a laugh as testing your mettle; though my skimpy health capacity kept me well-acquainted with the death screen, it was often the game’s appearance that alleviated the rage. From the bug-eyed Octodad infants that hurl themselves into your face, to the Germ’s woozy expressions as it rotates like a great, sickly washing machine, there’s a fun in Plasma Puncher that at least beckons a scoff as it puts you through the ringer. Even the bullet-hell moments saw me snicker a bit when a flight of snot-pooping ghosts sent me flying to the biff and pow sound effects of a Looney Tunes scuffle. The scant collection of tunes might err on the side of annoyance if you’re prone to numerous retries, however. Seasoned brawlers may not take so much of an issue, but the repetition may show through during more average playthroughs. 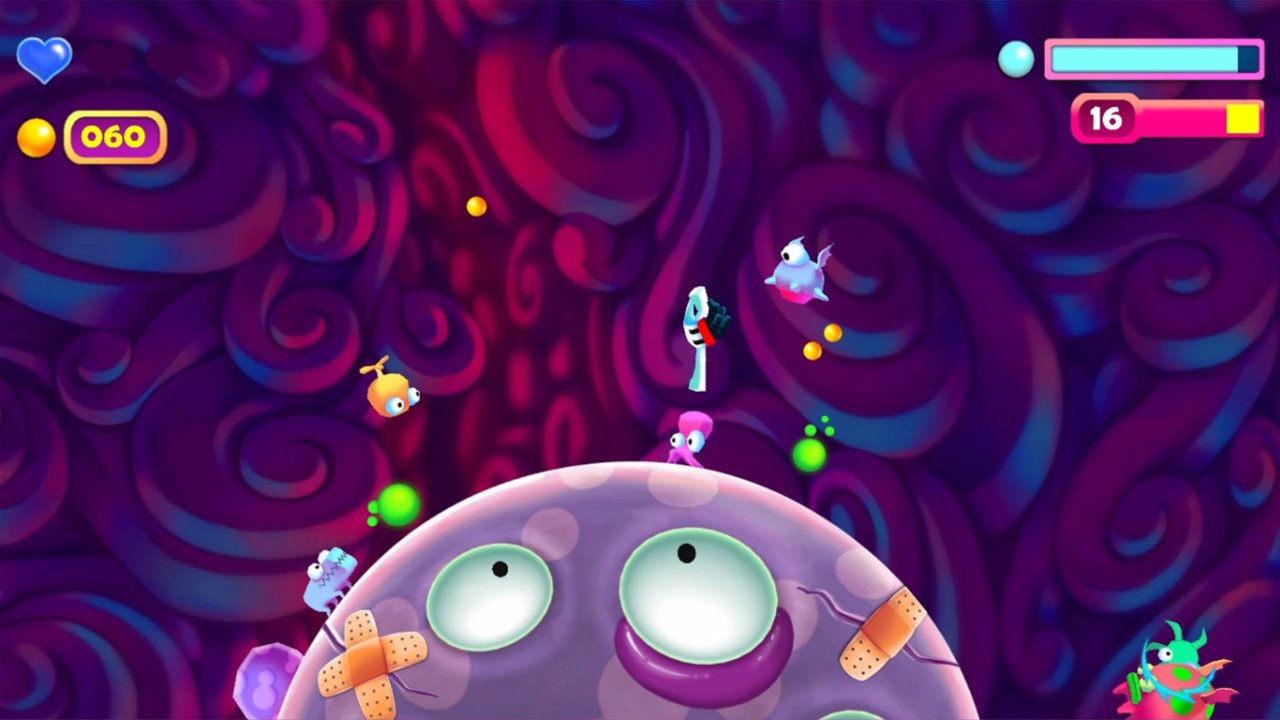 Ultimately, Plasma Puncher acts as prescribed. It’s a simple 2D brawler, whose responsive control scheme and challenging combat make for an addicting few hours of anti-bacterial detoxing. Doubtless, its hefty waves of nasties kept me irksomely well-acquainted with the death screen, but their goonish way of doing so at least had me cracking a smile in the process.

Our ratings for Plasma Puncher on PC out of 100 (Ratings FAQ)
Presentation
73
With a vibrant palette and stocky character-design, disease has never looked cuter, and though simplistic, it’s often the minor animation quirks that help diffuse the tension of brawling.
Gameplay
75
Equipped with single jump and attack functions, most of the game is spent either jumping to evade attacks or smushing amoebas. Controller-wielders might want to rebind the default settings, but once adjusted, controls are satisfyingly…well, punchy.
Single Player
72
Wave-based, fast-paced and punchily straightforward, it’s nothing the brawler hasn’t seen before, but its cellular premise and aesthetic cuteness embrace a fun that nevertheless cracks a smile. The upgrade system doesn’t offer much, but core mechanics are usually effective enough to render them unnecessary.
Multiplayer
NR
None
Performance
(Show PC Specs)
CPU: Intel Core i7-4710HQ @ 2.5ghz
GPU: Nvidia GeForce GTX 860M
RAM: 8GB
OS: Windows 10 64 bit

79
Save for a few very minor blips accompanying wave completion, Plasma Puncher plays smoother than probiotic yogurt, though its samey soundtrack might begin to grate while retrying levels.
Overall
74
Plasma Puncher doesn’t look to revolutionize the modern beat 'em up, but its punchy character controls and tough, wave-based combat offer an addictive few hours of amoeba-murder that ultimately makes that okay.

Our Review of Plasma Puncher
74%
Good
The Verdict:
"Simplicity serves this fun, microbial mash-fest"
Game Ranking
Plasma Puncher is ranked #851 out of 1668 total reviewed games. It is ranked #74 out of 174 games reviewed in 2017.
850. Angels with Scaly Wings
PC
851. Plasma Puncher