Compared to the days of releasing a legendary Mario title alongside their systems decades ago, Nintendo seems to have fallen into the common trap of lacking must-have exclusives for their system launches. Wii Sports is the clear exception to this rule, as the accessible little game bundled with the Wii at launch was the biggest factor in turning the system into a sensation. While Nintendo attempted something along the same lines with Nintendo Land for the Wii U launch, that title, while still decently received, didn’t end up having similar popularity. 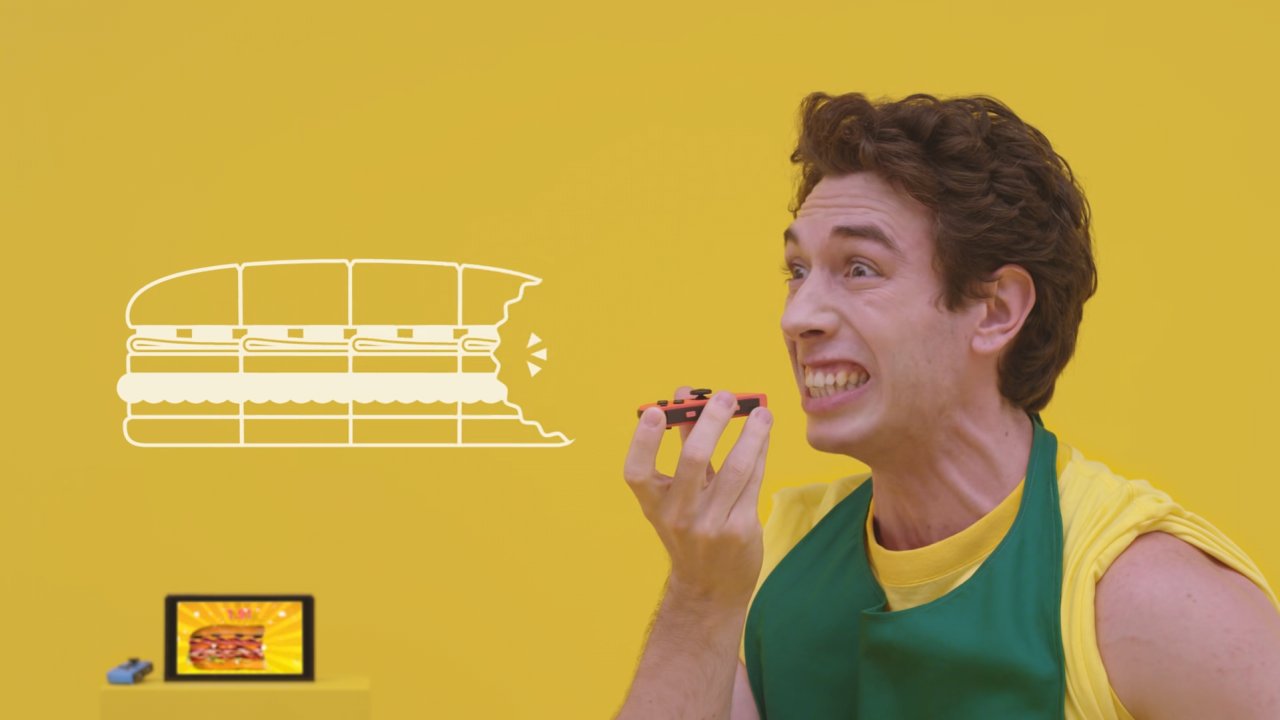 While Breath of the Wild is easily the biggest title of the Switch’s launch, it’s also simultaneously available on the Wii U, so Nintendo may have hoped to both boast a legit exclusive and a more accessible casual experience with 1-2-Switch, a party game that compiles numerous quirky minigames showcasing what the Switch’s trademark motion-sensing Joy-Con controllers are capable of. And while some of these minigames indeed boast legitimate fun and creativity, the batting average for all 28 of them isn’t as high as one would hope, and the window dressing surrounding them feels unfortunately threadbare even by party game standards.

1-2-Switch seems to be very much made with the system’s portable capabilities in mind, as a lot of the minigames don’t require or emphasize staring at your TV or console screen once they start, and almost all of them require the Joy-Cons to be detached from the console. This is actually a pretty smart move on Nintendo’s part, as I can see many people curious about the Switch getting interesting first impressions from friends bringing it over and playing some of the minigames (the key word being some) .

The first time you play the game, after registering 2 players by having them wave their controllers around, your initial selection of minigames is limited, and you need to play a select few before the entire roster opens up. It’s a pointless barrier, but admittedly one that is taken out of the picture too quick for it to matter much.

The first game Nintendo showcased when announcing 1-2-Switch, Quick Draw, is one of its simplest and most accessible, as players simulate a Western-style duel requiring them to be the first to point their Joy-Con like a gun and fire it via a trigger button when prompted. It’s not one I see getting lots of repeated play unless you continue to swap players, but some nice touches like displaying your response time and overall trajectory at the end of each round are cute. 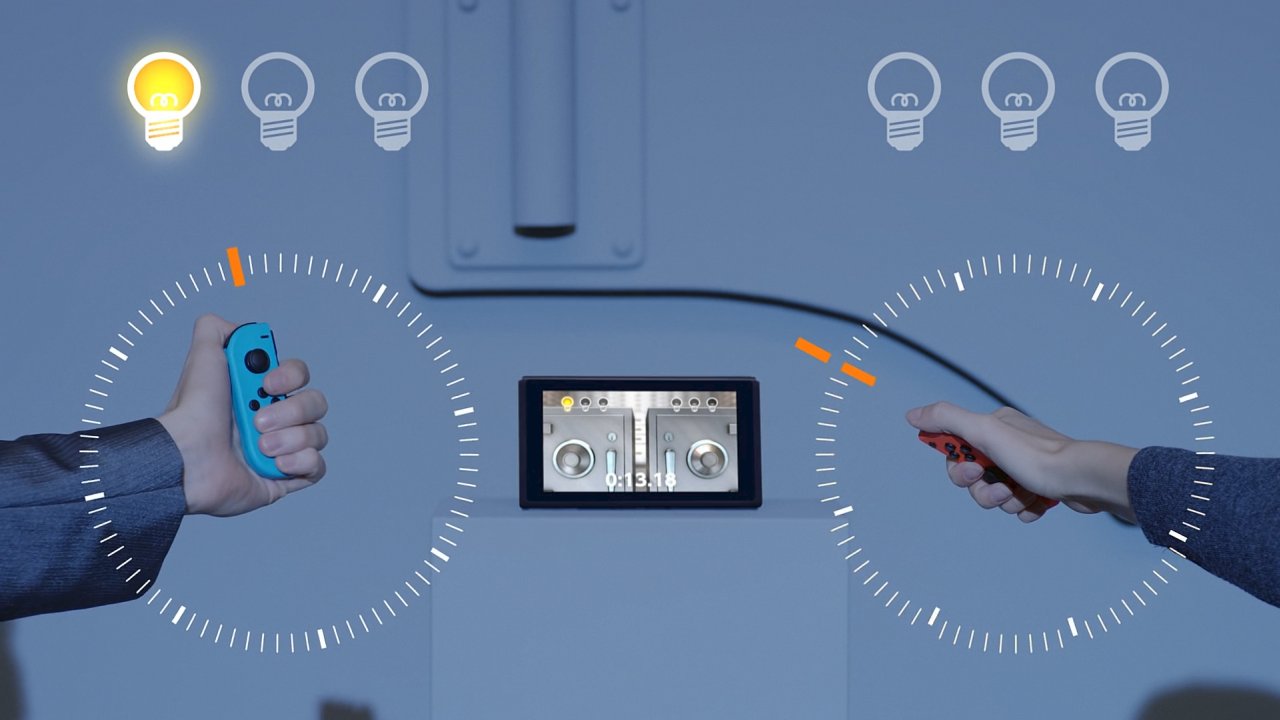 One of the more clever minigames is a direct variation on this, as Fake Draw generally sticks to the same rules, but has the in-game announcer attempt to fake players out by using alternatives to the traditional “Fire!” prompt that disqualifies anyone who moves before the proper word is used. When my friend fell for a yell of “Fruit!” early on, we both promised we wouldn’t get fooled again, only for me to fall for the supremely sneaky “File!” which led to a good laugh.

Easily the most unpleasant and cumbersome minigame is Baby, which requires both Joy-Cons to be attached to the console so the whole package can be cradled while a virtual baby screams away on the screen, until it falls asleep and a successfully putting the system down gently wins the game. It’s just about as fun as it sounds, which is to say not at all, and quite annoying.

Eating Contest is another of the most clever showcases of the Joy-Con’s capabilities, as it has 1 player hold the right one close enough to their jaw for its IR camera to pick up its movement, then mime chomping their mouth as fast as possible to see how many virtual subs they can chow down. This is another one that’s fun to both play and watch for the brief period it lasts, but the lack of an option to actually play it competitively by switching between players is headscratching.

Another game that only uses 1 Joy-Con is Soda Shake, which is essentially a mix of miming shaking a carbonated bottle until it pops open and a conventional game of Hot Potato where players pass the controller around and hope not to have the bottle pop during their turn. This one ends up being a dud, though, thanks to the fact that it seems impossible to have any idea when that will happen, despite constant vibration to simulate the fizz. 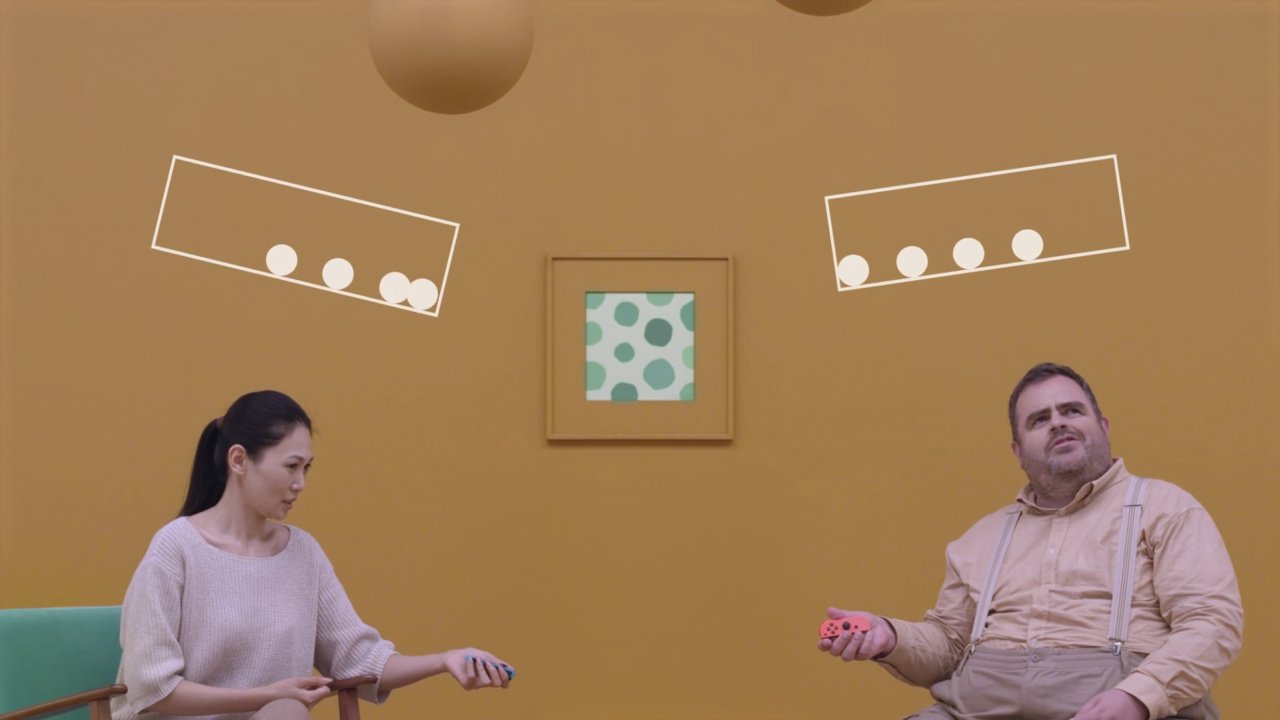 Treasure Chest is one of my favorites, requiring players to rotate their controllers to simulate unwinding a tangled chain off an on-screen chest of pirate plunder. The competitive and fun Shave also has players move and angle their Joy-Con to simulate being the first to shave their own beard the fastest. A similar but more frustrating concept is used in Joy-Con Rotation, which has players delicately try to turn their controllers around without altering its vertical angle too much, resulting in a minigame that feels overly finicky.

1-2-Switch also contains several minigames with a rhythm element, the best being Gorilla, which tasks players with pounding their chest in an ape-like fashion to mimic the timing of an earlier prompt a la PaRappa the Rapper. There’s also the entertaining Copy Dance, which has players take turns striking a full-body pose and having their opponent do their best to recreate it. Games like Air Guitar, Dance Off, and Runway would have benefitted from more guidance, as they rely more on freeform motions guided by a beat.

Other minigames tend to either outstay their welcome (Zen is little more than being able to hold a static pose longer than your opponent) or are over before it feels like they’ve really started (Beach Flag mimics racing towards a flag to pick up, and can be finished in about 15 seconds – same goes for the Telephone game where you aim to be the first to pick up your ringing controller and answer it). I generally didn’t care for the ones that went for a prolonged duel approach like the beam-repelling Wizard, the gladiatorial Sword Fight, the monotonous Plate Spin, and the block-heavy Samurai Training.

The game also isn’t enjoyable when it tries to pull off minigames that usually require more of a visual element. Much like Nintendo’s own compilations on the Wii, Baseball and Table Tennis are included, but they rely on staring at your opponent and gauging the timing and placement of sounds on the TV or console screen, which just comes off as rather awkward. 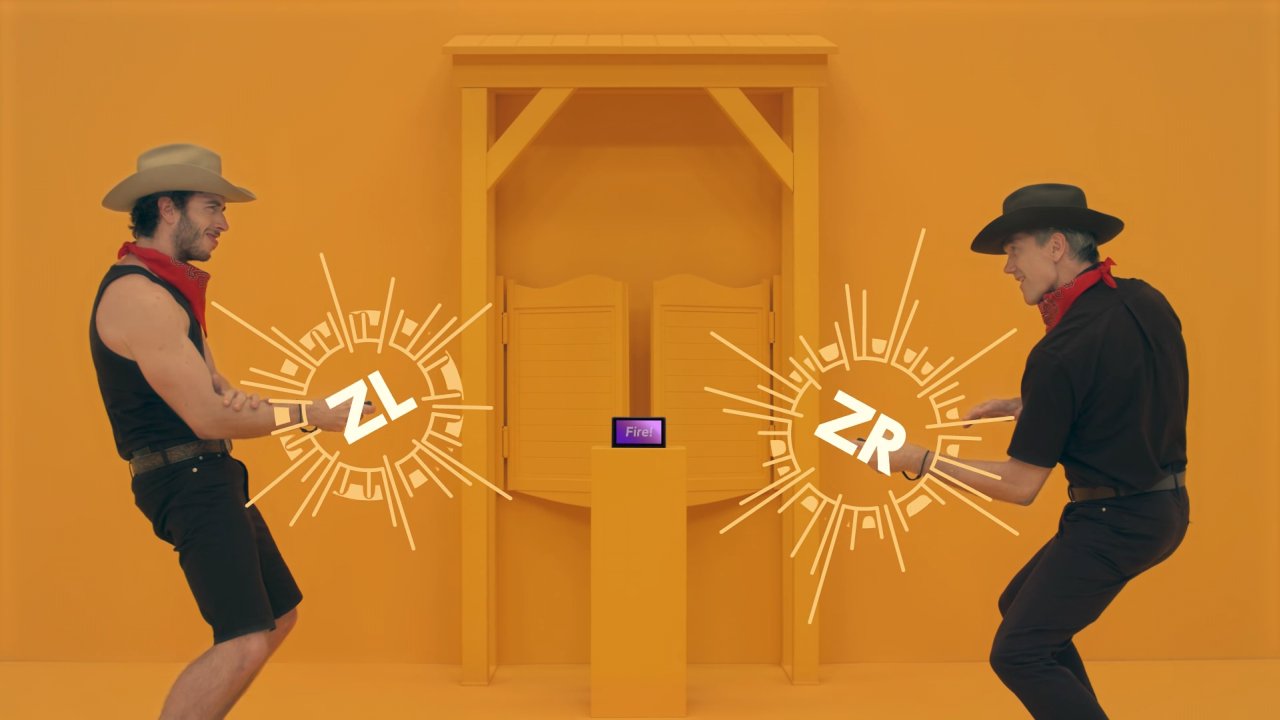 Probably the best executed game in terms of showcasing new tech is Ball Counting, where each Joy-Con simulates being a hollow box with small balls rolling around inside, and players guess with their analog stick how many individual spheres are inside. This is definitely the most notable example of the Switch’s “HD Rumble” feature, as it does a very solid job of simulating the physical sensations its real-life equivalent provides.

The game’s overall presentation is best described as Nintendo’s attempt at a mass market style. While many of the minigames are admittedly quirky, the poppy, simple menus and reliance on cheesy FMV tutorials and images rather than new or iconic Nintendo characters makes it look more like a Just Dance spinoff than a first-party effort at times. It’s not quite lacking in personality, but it is lacking in substance.

And substance is the key word in 1-2-Switch’s greatest failing. There is next to nothing to do once you’ve tried out every minigame. There are no unlockables, player profiles, avatars, or Mii support, and you don’t even get high scores saved for the games that display them after each round. The only genuine mode (besides a shuffle mode for those unsure what minigames to pick) is a simplistic board game setup that lets players or teams get closer to a goal by winning whichever game appears on the space they land on, but nothing about the minigames themselves is altered.

There’s also the fact that 1-2-Switch is being sold for $50 USD. With its shallow content and a general impression that it’s made more to showcase the Switch’s hardware capabilities than a full-fledged game, it really feels like it would have been a good candidate for Nintendo to pull a Wii Sports with and include as a pack-in title with every Switch system. But, possibly due to the slim launch lineup, greed on Nintendo’s part, or both, that did not happen, and the steep asking price for such a slim package is ultimately one of the game’s biggest problems. 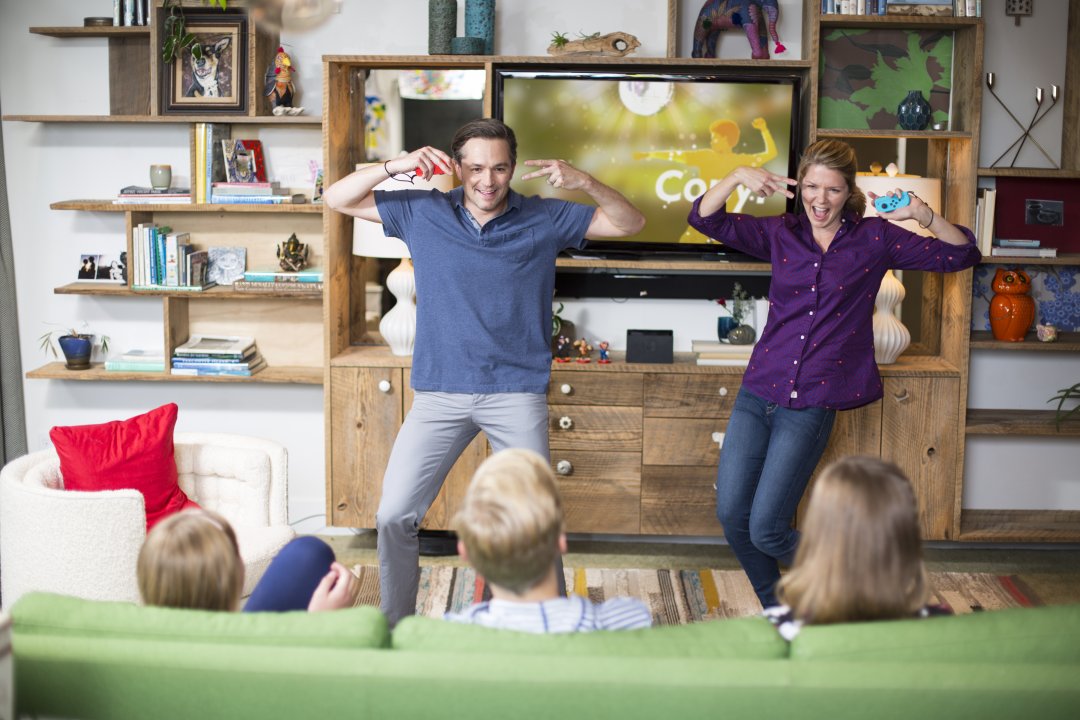 1-2-Switch is not a total wash. A good portion of its minigames are genuinely fun and clever, and its simplicity, combined with the Switch’s portability and a lack of reliance on screens, makes it something I can see being a big hit at family parties the same way as classic board games and other gimmicky group activities. The biggest problem is that ultimately, it does nothing to justify its asking price. If you like to clown around with friends frequently, it gets something of a recommendation, but for anyone else mildly interested, this is best saved for a rental or bargain bin purchase down the line.

Our ratings for 1-2-Switch on Switch out of 100 (Ratings FAQ)
Presentation
65
The bright colors and cheesy live-action videos and photos provide a widely appealing, if uninspired, look to the game.
Gameplay
55
There’s genuine fun to be had in a decent amount of 1-2-Switch’s varied minigames, but the batting average of good to bad could be higher, and a lack of progression, unlocks, and personalization of any kind leaves no reason to continually revisit it.
Single Player
45
Very few games can be done with only 1 player, and they tend to be among the weaker ones.
Multiplayer
65
You’re bound to have some laughs while playing some of these games with friends, but frustration in select minigames feels almost inevitable.
Performance
75
The game is far from a graphical stunner, but it runs without hitches, and most of the motion heavy games don’t suffer from feelings of imprecise detection as much as one might expect.
Overall
58
1-2-Switch contains minigames that are both fun diversions and promising examples of the technology at work within the system’s Joy-Cons, but several duds, a lack of substance or progression, and an expensive asking price make it feel like something that would have been better suited as a pack-in title.