A classic series makes a rather muted return

Hudson Soft’s Bomberman franchise, despite never feeling quite as prominent as other long-lasting retro franchises, proved to be one of the longest lasting. After starting on various little-known consoles in 1983, the series began to really gain traction on consoles like the NES and Turbografx-16, continually receiving both conventional sequels and experimental spinoffs on numerous home consoles and handhelds. 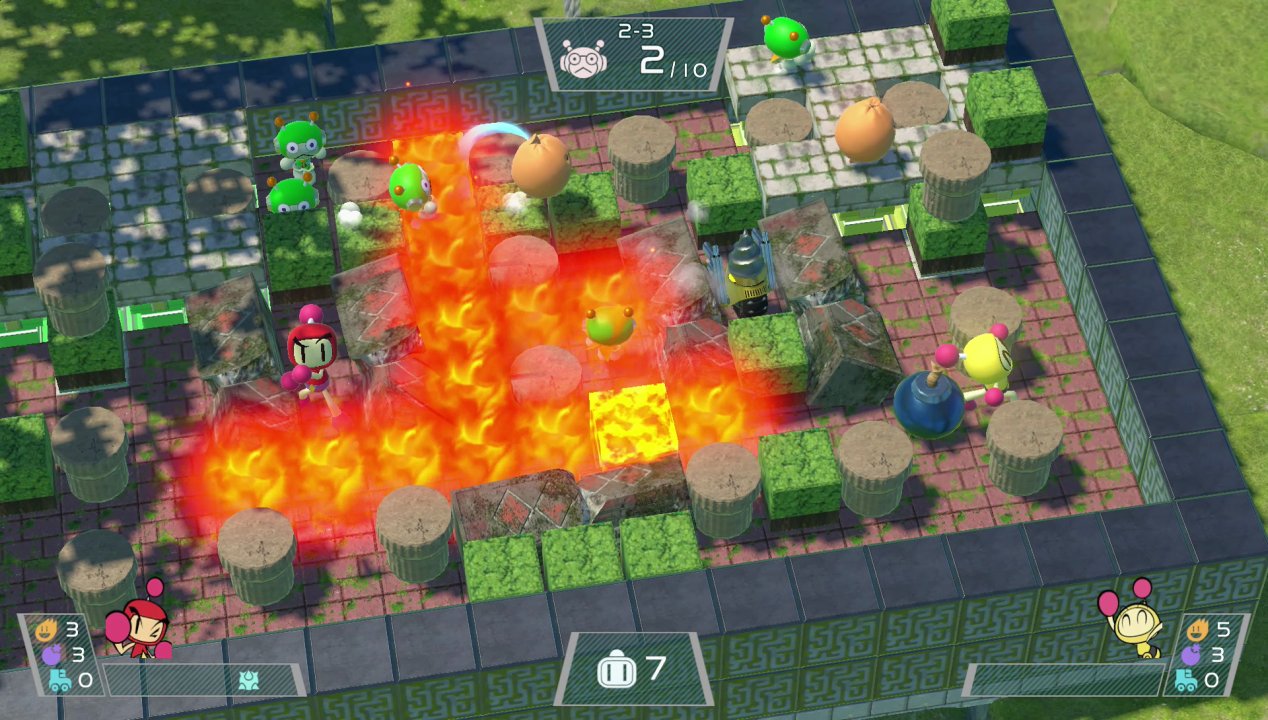 However, after Hudson was dissolved into Konami, announcements regarding new Bomberman games dried up, and it seemed that the handful of downloadable games released on seventh-generation consoles up to 2010 were destined to be the maze-like action series’ curtain call. Yet, a few months before the Nintendo Switch’s launch, Konami surprised many by revealing a new Bomberman game as a launch title for the system.

It isn’t some sort of spinoff party game or drastic reimagining like the infamous Act Zero either, but a back-to-basics, traditional entry that makes sense for the revival of a long-dormant series. Indeed, the publisher has even stated that the R in Super Bomberman R stands not just for its titular group of Bomberman Rangers, but as a return or rebirth for Bomberman.

As someone whose experience with the series was mostly limited to the single player-centric N64 Bomberman games and the addicting 2007 Xbox downloadable entry Bomberman Live, I was nonetheless intrigued to see how the first new game in over half a decade would fare. After completing its main campaign and sinking some time into the multiplayer, though, Super Bomberman R ends up feeling like many launch day titles: adequate in some areas, middling in others, and altogether a bit too brief and simple to be a system seller.

The campaign follows the adventures of the iconic White Bomberman and his seven color-coded siblings, as they scramble to free nearby planets from the forces of an evil emperor and his team, the Five Dastardly Bombers. The story, told exclusively through 2D cutscenes best described as a cross between Flash vector animation and motion comics, is super forgettable and inconsequential, helped little by writing straight out of a bad Saturday morning cartoon (a villain genuinely says, “Haha, you fools! You’ve walked right into my trap!” at one point) and cheesy voice acting that tows a fine line between endearing and awkward (White Bomber’s voice in particular sounds both ill-fitting and badly delivered). A few character interactions did get smiles out of me though, and it is a little cute that each Bomber has their own individual quirk, as one-note as they are. 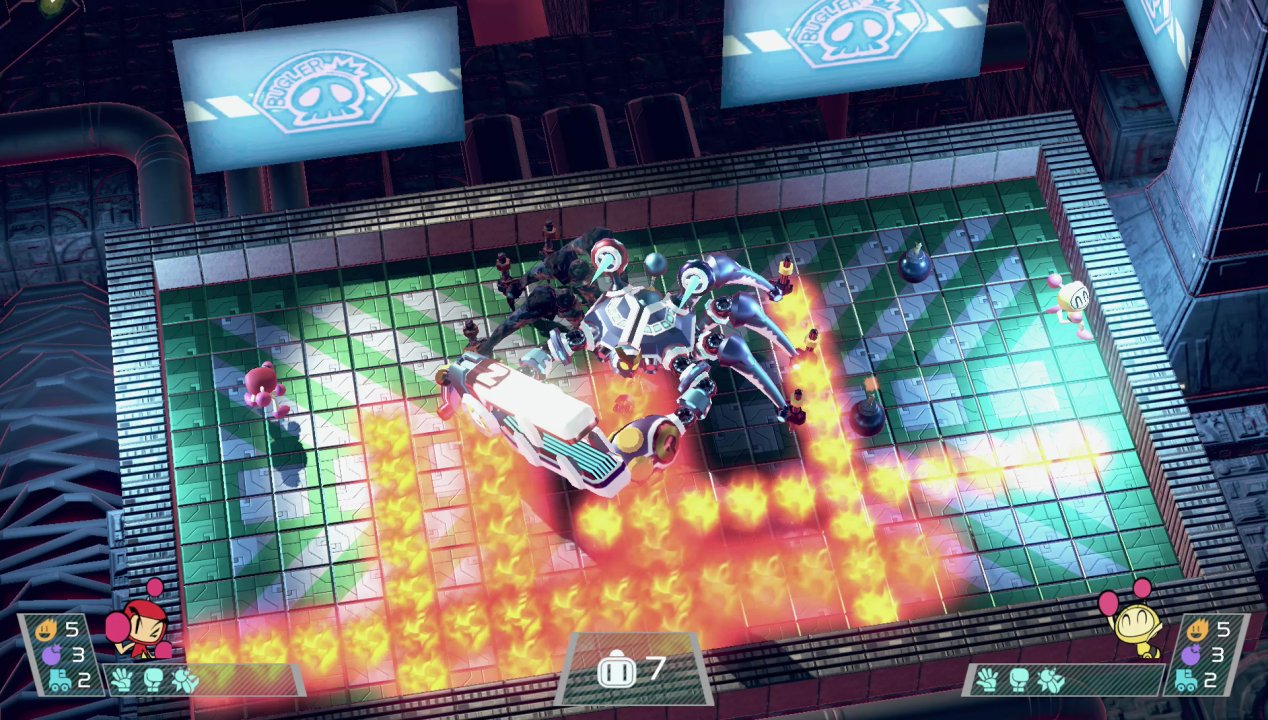 Outside of boss battles at the end of each world, the story fails to properly tie into the actual gameplay, which is traditional Bomberman through and through. Players navigate the Bomber sibling of their choice through dozens of small, grid-like areas, taking out obstacles and enemies by dropping timed bombs that blow up in straight cross-like explosions, while collecting powerups that can increase player speed, explosion size, and the amount of bombs that can be onscreen at once.

The majority of level goals boil down to defeating every enemy drone so an exit can open, but deviations such as finding keys, escorting civilians to a safe point, and surviving for a set amount of time against endlessly spawning enemies also get tossed into the mix. While it’s nice to have objectives that mix things up, some work better than others (escort missions in general are rarely fun, though at least the AI stick by you rather than wandering off), and the primary goal of defeating every enemy remains in the vast majority of levels.

The boss battles at the end of each world manage to highlight both high points and low points of the campaign. They’re generally divided into two portions, first having you take on one of the Dastardly Bombers in a conventional fight similar to multiplayer Bomberman, where you run around an area and defeat the boss the moment they get caught in one of your explosions. After this, they summon a large mech that you fight in a more open area, which will take many more hits as you find weak points to exploit via repeated explosions.

The first portion is an exercise in frustration, tedium, and sometimes just pure luck. Even on the easiest difficulty, the bosses are often ridiculously good at moving quickly to hide in the perfect spot and avoid what you’d assume would be a surefire KO. It’s funny that, while some of them irritated me to no end, I ended up beating two others within the first 10 seconds of the round, before I even realized what had happened. All these elements put together reek of poor balance testing. 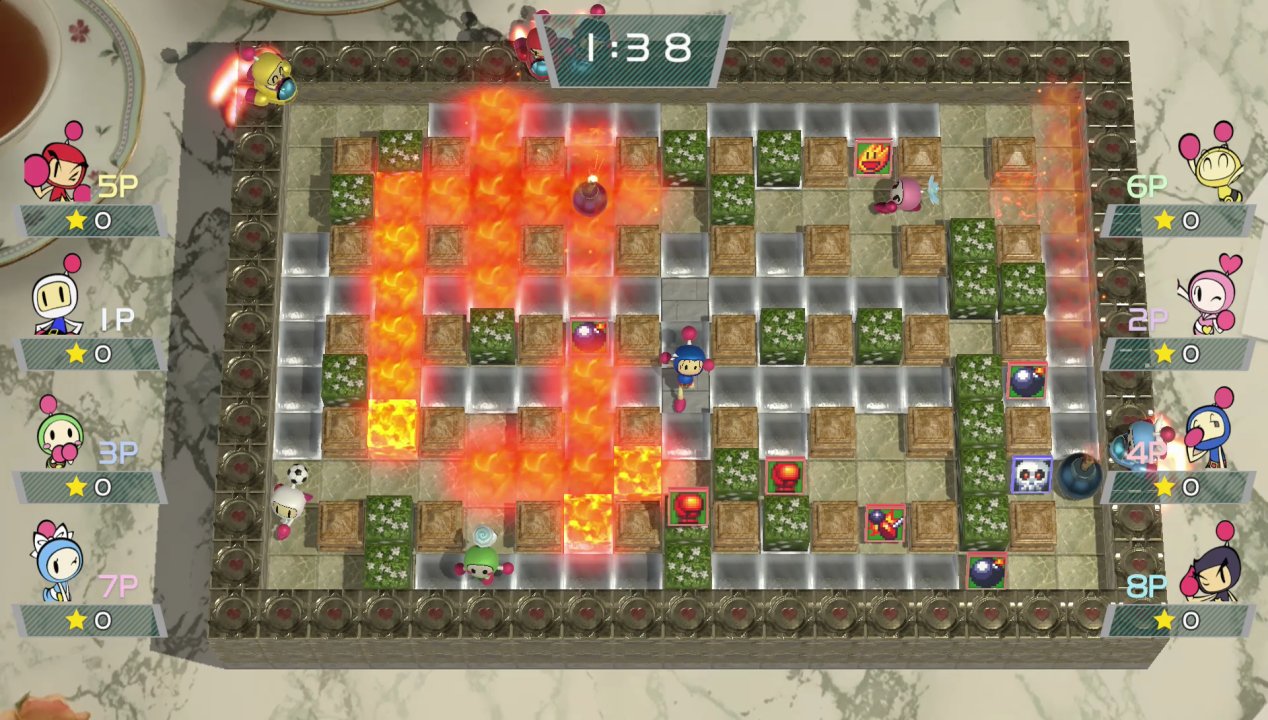 However, the mech fights are a lot more satisfying, and usually contain more of a legitimate challenge rather than almost random factors, along with more creative attacks from the enemies. There’s also the fact that you have full 360-degree movement in most of these areas instead of the straighter, more narrow movement the primary levels restrict you to. Should Konami include a similar campaign in any future Bomberman game, I hope they expand on some of the elements here, because they’re generally some of the most fun I had playing through the story.

I mentioned a feeling of poor difficulty balance in the boss fights, and this feeling also extends to how the campaign’s different difficulties feel. Like with most games that offer the option, I initially started playing on Normal, but found myself rapidly losing lives within the first world, due to enemies being numerous and fast enough to avoid my explosions, and accidentally causing me to walk into them. When played on Easy, though, the game became almost too much of a cakewalk with how much it reduced those factors. It feels like maybe the game’s idea of Normal should have been Hard. Finally, a bizarre cosmetic decision is how all the story levels are viewed from a slight isometric angle, which can make judging bomb and explosion paths trickier than necessary and, as far as I can tell, can’t be adjusted in the slightest.

There’s also the issue of how the game handles continues. Rather than making them infinite or a set amount, once you lose all your lives, the game gives you the option to respawn where you last stood with a full set of new lives. This is redeemed via an in-game currency earned through finishing worlds or playing multiplayer matches (thankfully, microtransactions are nowhere to be seen). I typically would earn 300 to 500 credits for clearing a world, and considering that it only costs 10 to respawn in Easy mode, it was basically no different from having unlimited lives and continues. The cost in Normal, however? 300 credits, and I can only assume Hard is even more expensive.

I don’t know why the campaign seems made to be either a cakewalk or a strict challenge with no inbetween, and I can only hope Konami considers patching the game to address these issues a bit. Combine all the previous problems and the fact that you can probably clear the campaign in under 5 hours, and it’s not an enticing package for those not interested in multiplayer. Even the much-hyped drop in and drop out co-op feature is local only, and Player 2 can only join in between levels rather than during them. 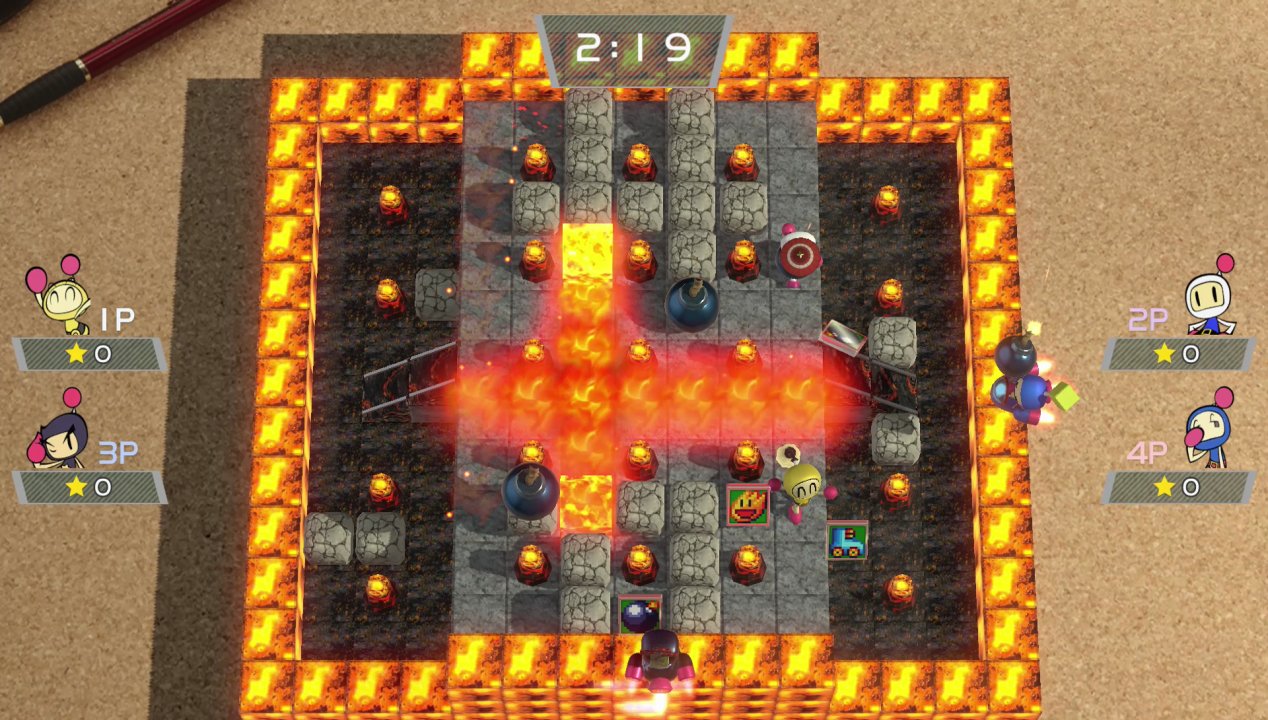 To be fair, Bomberman has typically been a series more loved for its competitive play than its campaigns, and players will likely get more enjoyment out of the multiplayer here, as well. Up to eight players can take on each other locally and online, utilizing the same mechanics and powerups in confined arenas to blow their opponents away and be the last Bomberman standing.

Most Bomberman multiplayer conventions have been retained here, and local play also allows you to tweak individual settings on the handful of maps for each match. My time spent in this mode both online and locally was generally decent, but still felt a little lacking in its general feeling of been there and done that for the series. The map design doesn’t feel quite as intuitive as the likes of Bomberman Live, and though the tease of using the in-game credits to purchase additional maps and character accessories initially seemed interesting, what I unlocked didn’t feel worth the effort.

Online play also suffers from some nasty input lag on a fairly frequent basis. Apparently, Konami chose to make the connectivity peer-to-peer rather than spring for a dedicated server, so one player with a spotty wi-fi connection can easily drag the experience down for all involved. A patch was released a few days ago in hopes of addressing this problem, so hopefully the developers will get it to a better condition in the future.

The game’s overall presentation feels a bit lackluster, too. While the framerate never has issues, and some of the environmental lighting on characters looks nice at points, environments and character models have a generally uninspired feel to them, and outside of the cutscenes, the color scheme is often darker and muddier than I expect from this kind of series. However, the soundtrack is overall very good, with lots of jaunty electronic tunes reminiscent of the olden days of similarly lighthearted Japanese games. 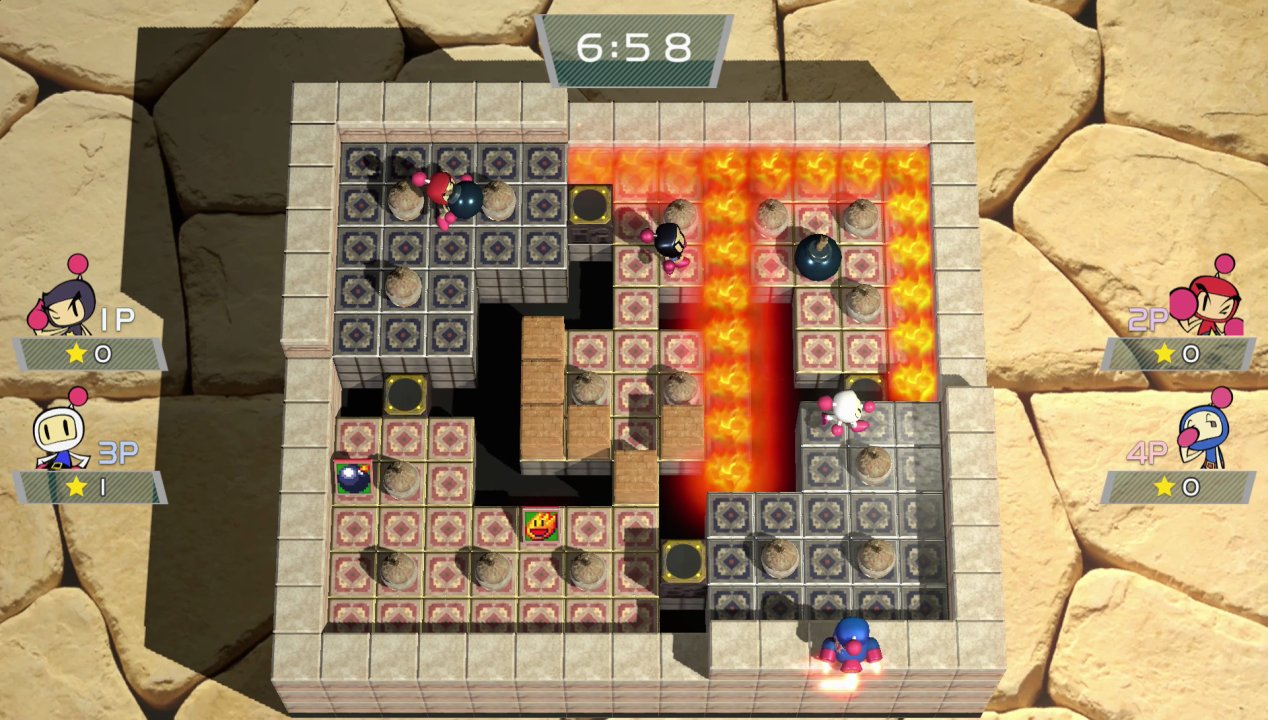 Other than that, there just seems to be a general feeling to Super Bomberman R that the developers didn’t want to put that much effort into it. Co-developer HexaDrive seems to primarily have a history of only doing HD remasters or offering some assistance to the primary teams of bigger titles, but I don’t know if they or Konami’s in-house developers are responsible for the worse aspects of the game. This really feels like something better suited for a $20 downloadable title than a full retail package coming in at $50. While it’s nice to see a long-dead series return alongside Nintendo’s latest console, I hope that some more time, care and passion will be put into the development of any possible follow-ups.

Our ratings for Super Bomberman R on Switch out of 100 (Ratings FAQ)
Presentation
60
Graphics are adequate, but often bland, and the flimsy story is presented in cheap-feeling manner. Some of the musical tracks are quite toe-tapping, however.
Gameplay
60
The core aspects of classic Bomberman are retained in all modes, though one can’t help but feel they’ve been executed with more style and effort in older games.
Single Player
55
Some good fundamentals and boss fights are undercut by repetition, a short campaign, and absurdly extreme difficulty differences, with the continue system being one of the biggest examples.
Multiplayer
70
Competitive play will provide most of the game’s best moments.
Performance
65
The game has no technical hiccups when it comes to local play, but online matches frequently suffer from noticeable lag.
Overall
63
As nice as it is to see a long-dormant retro series return, Super Bomberman R's lack of creativity and unbalance issues result in it not feeling like the proper comeback it could have been.

1322. The Sojourn
Xbox One
Related Games