There’s no shortage of simulation games on PC, as the genre has been continuously expanding over the years. From the obvious choices such as car racing and city management, many niche experiences have also arisen, like truck driving, farming, and even street cleaning simulators. Taking on these seemingly menial and basic jobs still has some appeal, if the experience is well designed. Some of the more thrilling simulations often focus on stressful jobs, such as those of first responders – be it firefighters or police officers. But who manages these responders and directs them to the emergency situation? That would be the operators, who have the daunting task of getting the right people to the right places, so that they can save lives. 911 Operator, a new title from Jutsu Games, aims to simulate this experience. 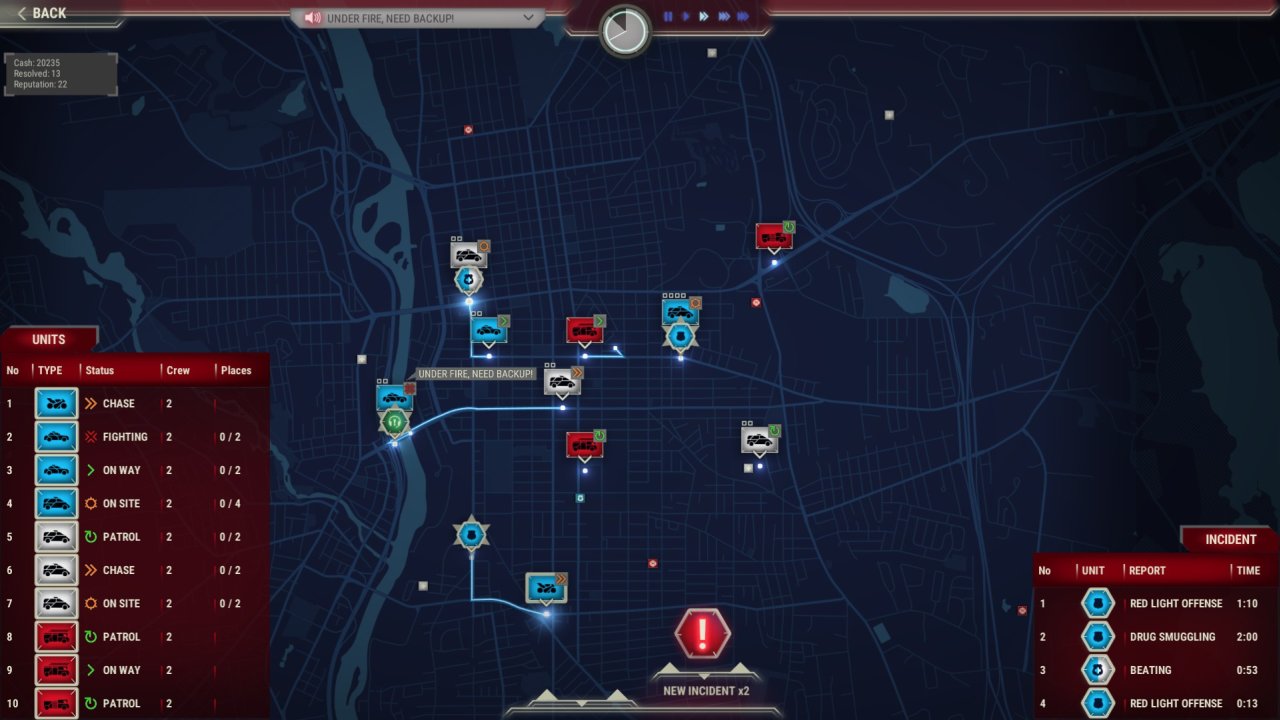 911 Operator presents players with a 2D layout of the center of a city, and a number of vehicle icons for crews that include firefighters, police officers, and paramedics. Each time-limited dispatch day continuously presents a number of different emergency scenarios to the player, and your job is to attend to as many calls as possible. The players’ job is straightforward – analyze the situation based on the presented information, and direct the relevant services there. If there’s a request for medical services, you click the icon to send the ambulance there. If a fire breaks out, you select the fire crew and send them over. If there is a car accident, or a large apartment building fire, you may need a crew from all three departments to attend. Each of your crews take time to drive to the destination, so the key is not only to send the correct team to the right location, but also ensure you are never too far away from any corner of the map. If things get hectic and you need to redirect crews mid-trip, or ensure that each call is covered, you can pause the time and make the adjustments as needed.

Besides the emergency icons that pop up on the map periodically, you’ll also be engaged with answering actual phone calls. These recorded audio conversations present players with a number of different scenarios – a panicked woman who was in a car accident, a witness to a fire or robbery, or someone’s cat stuck in a tree. During the conversation you’re able to make dialog choices, such as asking for details of the incident, location, and any other relevant information. This helps the conversations feel realistic and dynamic, and the voice acting as well as background sounds are very well done. You can sense the panic of a woman’s voice as her car catches fire, you can hear the blaze of a large fire in the background of a call from a witness, and the roar of the highway during a call from a man in a car accident. Some of the calls are downright harrowing and I wish there were more of that in the game, instead of false-positives of calls complaining about a car on a sidewalk.

A unit arriving at the destination presents players with a breakdown info screen of first responders on scene, and the victims/criminals. Then you simply wait for the situation to get resolved – though you can manually adjust what each responder does, it is never needed. The cops will write the ticket, apprehend criminals, and get involved if a firefight breaks out. Paramedics will attend to the wounded and drive them to nearest hospital if needed, and the firefighters will put out flames and clear cars from an accident. Following a brief period, the emergency is resolved and the crews will remain in the area until you direct them elsewhere. You can pull crews away from situations at any time, for example the firefighters have cleared the cars after a collision and can now go attend a fire, while the police remain behind and finish the paperwork. 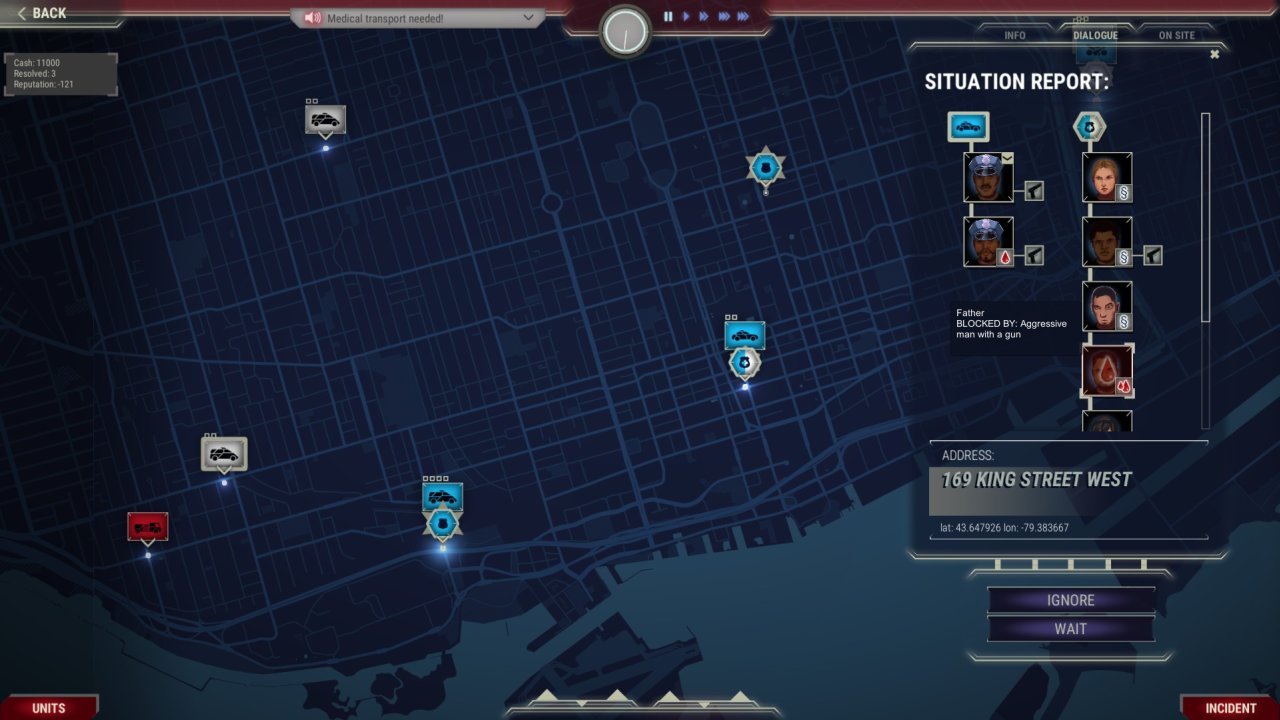 Unfortunately, because this was a Kickstarter title with a limited budget, the variety begins to run out rather quickly. The emergency scenarios that appear across the map have different information written about them, but at the end of the day they are just icons that you direct appropriate crews to. Eventually you stop bothering to read them, and the game becomes a simple color-matching exercise for sending cops to blue icons, firefighters to red icons, and paramedics to white icons. And when it comes to voice calls, the repetition sets in even faster, as you quickly learn each scenario and the correct responses to make based on voice of the caller and the script. It’s too bad, because as mentioned the voice calls are well done and can be engaging, but also quickly grow annoying as you can’t skip the dialog you’ve already heard a few times before.

Between the dispatch sessions where you actively manage fire, police, and medic crews, players get a chance to improve their services. In this RPG-like preparation screen, you can manage the staff, vehicles, and items. Each of your first responders comes with a variety of stats, such as first aid ability for medics, marksmanship for police and driving skill. Their skills increase with rank, which comes from experience; you can also hire additional crew members for any of the three professions. Staff can get injured on the job, so you’ll need to shift things around and maybe take vehicles out of service if no reserve staff are available. Players can purchase vehicles, and they too have stats, such as speed and capacity. Lastly, you can buy equipment items – from shotguns and vests to first aid kits and fireproof coveralls. Each crew member can have two equipped items, so it becomes a balancing act of having the right equipment for the job while also being versatile. Lastly, players can of course manage the members of each responding vehicle, and add new crews to the fleet.

The progression system is definitely enticing – getting more money after each dispatch day means progressively better staff hires, expanded fleet (which can include motorbikes and helicopters), and proper equipment. The problem is, during the game, it’s not possible to see who is in which vehicle until you arrive at the scene and view the detailed info screen, or memorize it beforehand. You can’t rename the crews either. But in the midst of a busy day, you’re most likely just going to send the closest available unit, so perhaps that information isn’t relevant anyway, and so there’s an emphasis on evenly upgrading all aspects of your crew as soon as possible. 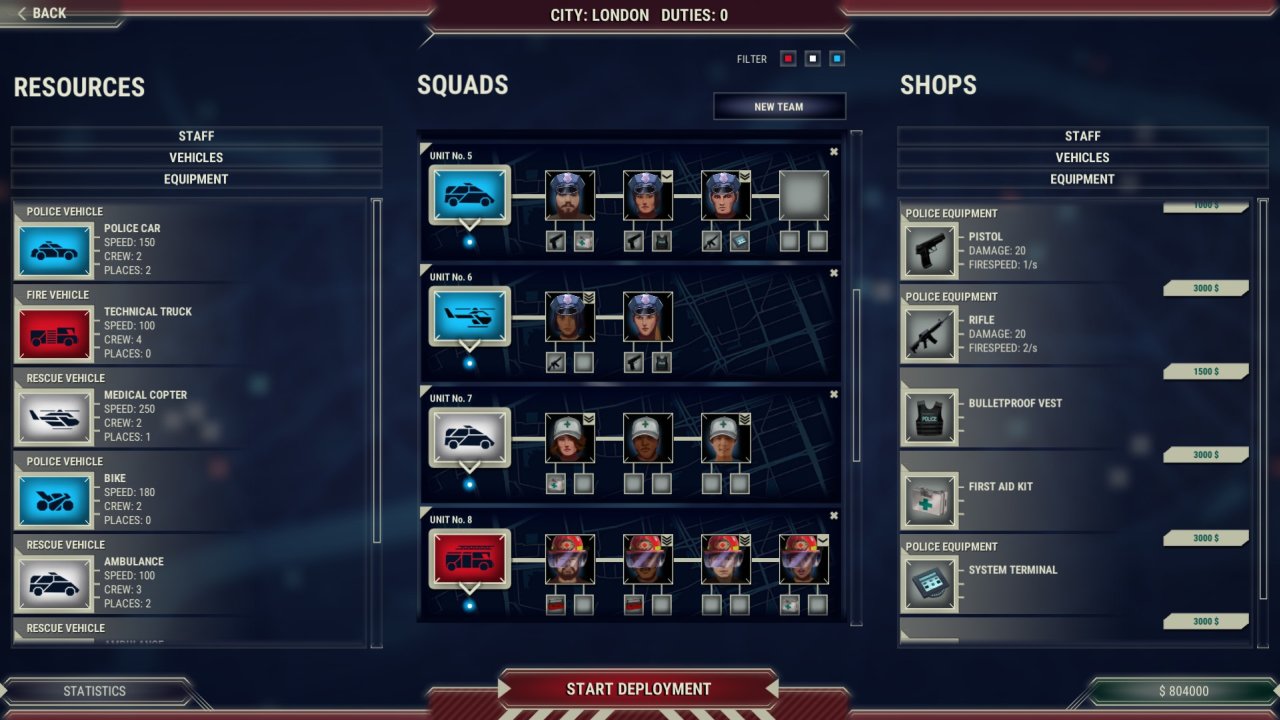 Overall there are two modes of play - Career and Free Play. In Career, you must successfully attend a certain number of situations so that your reputation in the city is good. It usually takes just a couple of dispatch days to earn enough reputation for the next city to become available. The progression curve is fine, though the game has a very binary decision system - if you choose to attend a call that isn't considered an emergency by the game, you get penalized. You may have a spare police car in the area, and so you attend a minor problem such as an illegally parked car - the game will deduct you performance points for this action. It's a poor design choice - if the player has time and resources, why punish them for responding to these minor calls? Overall though it's easy to progress, because the game won't end the session if there are active emergencies, even if the timer has run out for the day. It's also tough to fail a call; as long as you don't ignore it, even getting there very late still nets positive reputation.

Free Play is essentially the same experience, but you can choose which city to start in. Herein lies one of the game's coolest features - you can download a map of lots of major city centers across the globe. The roads are correctly recognized and path finding for your crews works well. It is quite neat to manage the emergency services of a city you're familiar with. It's usually just the central/downtown area of a city, but still a neat feature.

The mouse controls are intuitive and simple. The map presents clearly identified icons for what service is needed where, and you can click on the appropriate vehicle icon of the first responders and direct them where to go. Some of the UI elements can be awkward though. For instance, the option to "ignore" is right next to "wait", which basically closes the situation report window - even if you're clicked to wait and already sent the emergency crews over there, the "ignore" option never disappears, so you could end up accidentally cancelling the event. Thankfully simply hovering over an incident icon, or using the quick overview in the bottom of the screen is good enough, without opening the large detailed overlays. 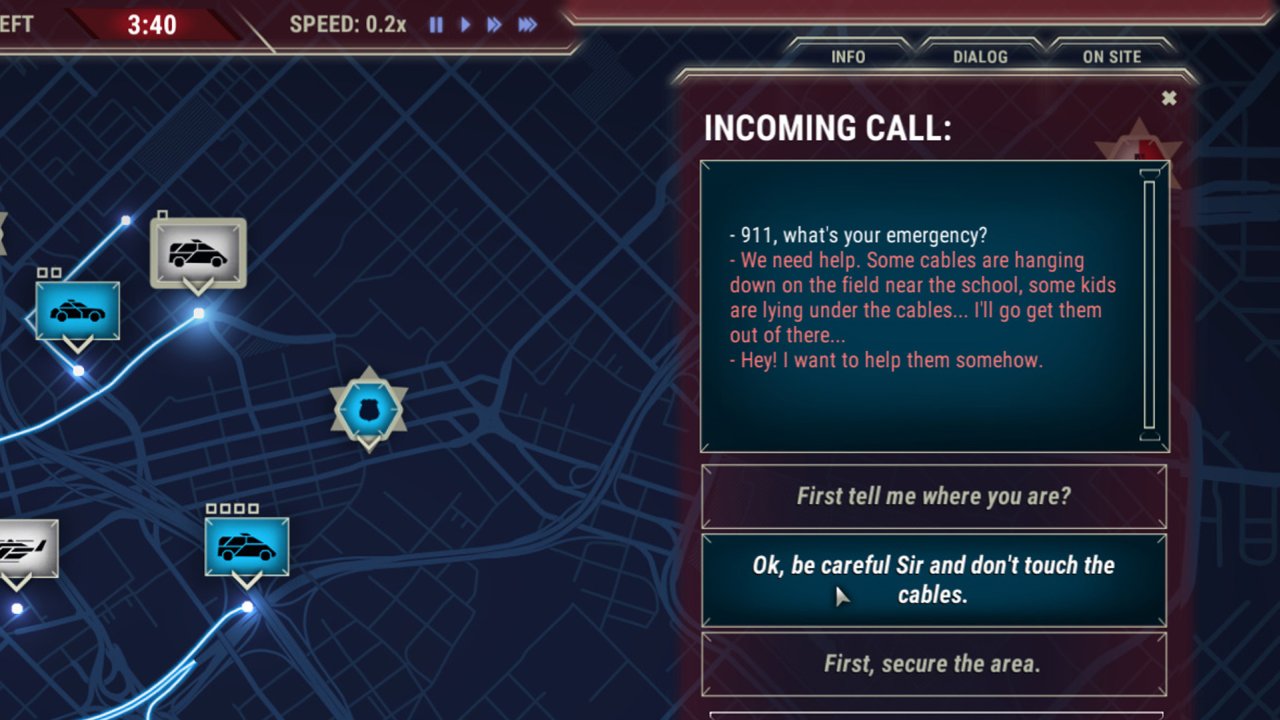 911 Operator had very good potential to become an involving and even addicting resource management game. At its core, the gameplay structure is very sound, and the day-to-day emergency crew management combined with intermissions for item and staff upgrades is a winning formula. Unfortunately though, there are a number of areas where the game comes up short, with variety being a key limiting factor. It's also a bit expensive for what you get, and day 1 DLC being available will certainly sour some players. It's fun for a while, but does become rather easy and repetitive. It could have even worked better as a bite-sized mobile title without the voice calls - though the Kickstarter stretch goal for that version was not reached.

Our ratings for 911 Operator on PC out of 100 (Ratings FAQ)
Presentation
70
A minimalistic interface, but it does the job. Some immersive sound effects and voice calls. A few UI elements could have been better designed.
Gameplay
75
A surprisingly addictive mix of trying to manage emergency services, while improving your crew between sessions. It's fairly easy to progress, and the game annoyingly detracts points for attending a call the developers didn't deem to be a real emergency.
Single Player
50
You get to see all that the game has to offer within just a few gameplay sessions, and it becomes a mindless color-matching exercise. Voice calls run out of content even sooner and become repetitive.
Multiplayer
NR
None
Performance
(Show PC Specs)
CPU: Intel Core i5-4670K @ 3.80 GHz
GPU: ASUS Radeon R9 280X DirectCU II
RAM: 16GB DDR3
OS: Windows 7 Professional 64-bit

95
No issues were found. The game loads quickly, and the ability to add any major city in the world to the game is impressive.
Overall
65
911 Operator successfully taps into some addicting resource management gameplay and effectively combines it with a unique emergency call center scenario. This foundation is solid, but repetitive mechanics combined with a lack of content and relative ease of progress leave this simulation feeling lackluster. 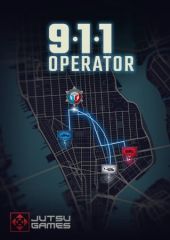