A visual and mechanical treat for sidescroller fans

Independent developer WayForward has a large variety of titles under its belt, usually either licensed games of varying quality, retro revivals like Double Dragon Neon and DuckTales Remastered, or original IPs like Mighty Switch Force. Their most critically lauded work, though, is probably the Shantae series. After the first game's critically praised but under-the-radar release on the Game Boy Color, the series was revived nearly a decade later on the DSi with Risky's Revenge, followed soon after by Shantae and the Pirate's Curse. 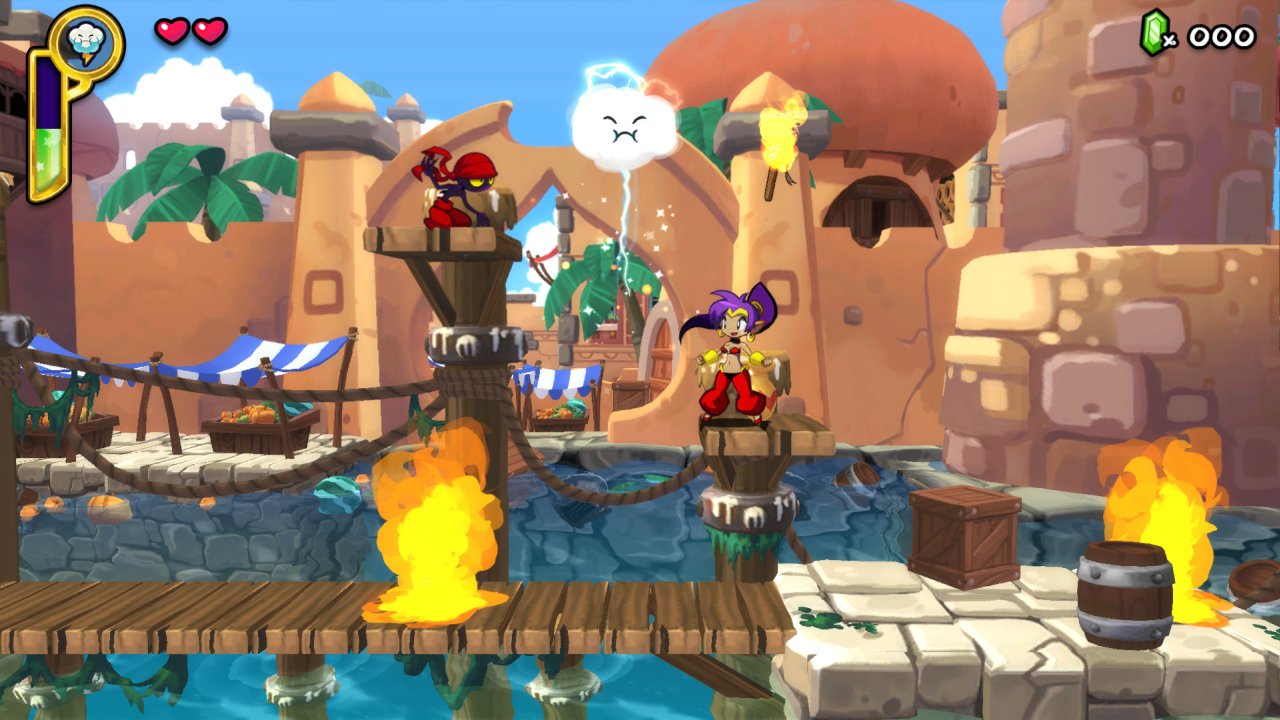 Shortly before the third game's release, WayForward decided to get more ambitious with the series, and turned to Kickstarter to fund the formerly handheld-exclusive pixel art series' first high-def, home console entry. In the interest of full disclosure, I did back the game at a basic tier, but was not involved beyond that during its development. Three years later, Shantae: Half-Genie Hero is finally out, and while it still suffers from one of the series' biggest recurring hurdles (albeit in a different way due to its new overall structure), fans of the previous games' more charming aspects, most notably the polished platforming and pleasant presentation, will be happy to see many of them preserved and even improved upon.

The titular half-genie guardian of the seaside Scuttle Town starts her latest journey once again fighting off longtime nemesis Captain Risky Boots. Though Risky vows to return after losing an early fight, Shantae's mechanic uncle has begun work on the Dynamo, a device powered by various rare components that could potentially provide Scuttle Town better protection. Shantae sets out to track down each part, getting tangled up in other conflicts involving familiar friends and enemies along the way.

The Shantae series has always had a somewhat simplistic and segmented structure to its story, but Half-Genie Hero's overall plot is among the weaker ones. There's still a lot of funny moments, concepts, and characters, but unlike previous entries like Pirate's Curse, which subtly built on elements like Risky's past and relationship with Shantae over time, plot progression feels very episodic and isolated, with each level having its own conflict to focus on and the initial teases of the prologue only regaining prominence during the endgame.

Thankfully, longtime supporting characters like Squid Baron and Rottytops return and provide witty, endearing conversations to set up levels, sidequests, and boss fights. From bosses attempting to make bootleg mermaids by shoving kidnapped maidens into fish, to a sorcerer casting a wicked spell with the sole purpose of securing merchandising rights, the series' traditional wit shows no risk of going anywhere. 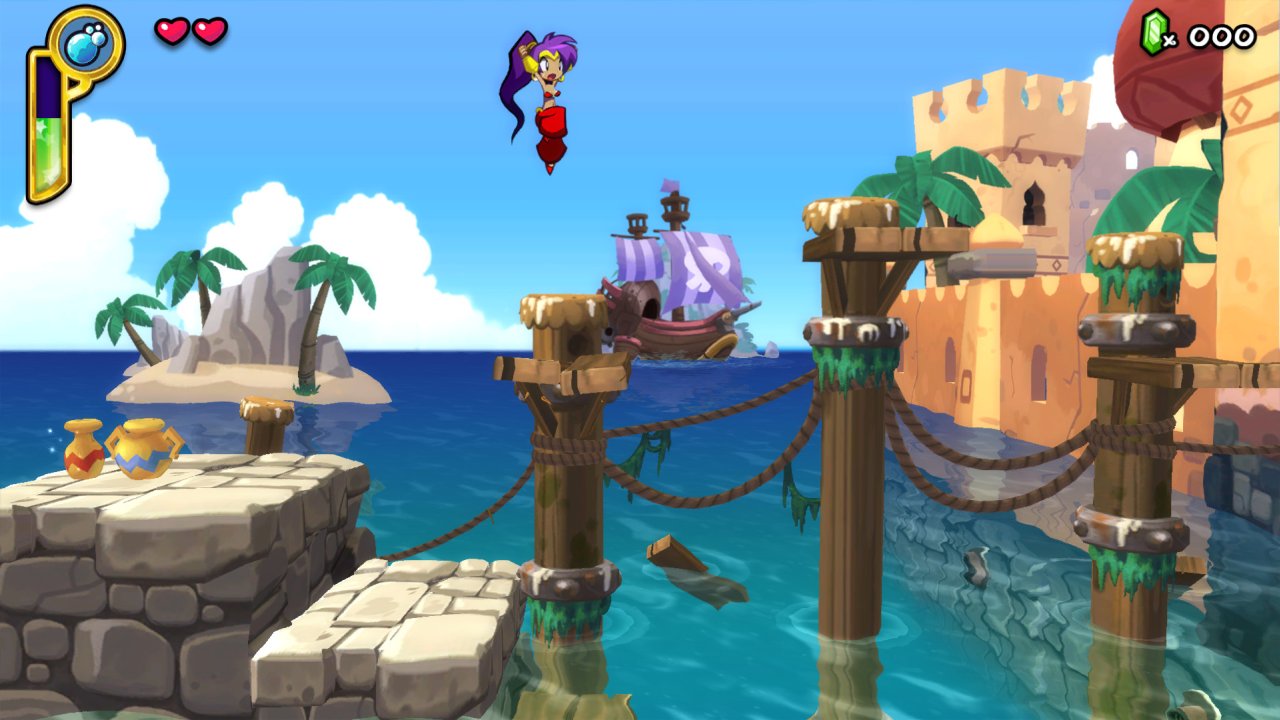 Where the game makes its most noticeable improvements in presentation is in the actual visuals. While all three previous entries relied on elaborate pixel art due to being originally made for low-spec Nintendo handhelds, Half-Genie Hero's development as primarily a home console game has incentivized a massive overhaul. The once-blocky characters are now portrayed through fluid 2D vector animation similar to games like Rayman Legends, while environments are now fully polygonal.

This new approach could have turned out iffy in the wrong hands, but WayForward has often seemed to me like a developer that puts tons of effort into the art of even their more forgettable licensed games. The fact that they went in the same direction with DuckTales Remastered a few years back also meant they had prior experience with it. And given that Shantae is arguably their flagship franchise, it didn't surprise me that Half-Genie Hero looks marvelous. Characters are appealingly designed and expressively animated, the backgrounds look meticulously crafted, and both art styles blend together nicely. It's a feast for the eyes all around, and one of the most charming-looking games I've played in some time, outside of some occasional strobe-like effects during screen scrolling on the PS4 version I played through.

The soundtrack is also easily the franchise's best. Previous entries certainly had standout instrumentals, but almost every single song this time around is a genuine toe-tapper, with energy, variety, and an upbeat, bouncy feel reminiscent of classic Japanese sidescrollers. Much like Pirate's Curse, voice acting is reserved only for a select few lines from Shantae and Risky, but in a series first, a catchy full vocal theme plays during the intro stage and credits, which is a nice touch.

Basic gameplay is practically identical to the last two entries, which isn't necessarily a bad thing continuing how solid those were. A purely sidescrolling affair, Shantae once again runs and jumps through several platforming-heavy levels, taking on various enemies with her trademark ponytail whip. The transformation mechanic from the first two entries also returns, allowing Shantae to utilize her genie powers and unlock spells that turn her into various creatures like a monkey, elephant, mermaid, and more, which come in handy when it comes to exploring every nook and cranny. Finally, whipping enemies and various vases scattered throughout the land will allow players to collect in-game currency that can be spent on consumable powerups and ability upgrades to lend Shantae an edge in battle. 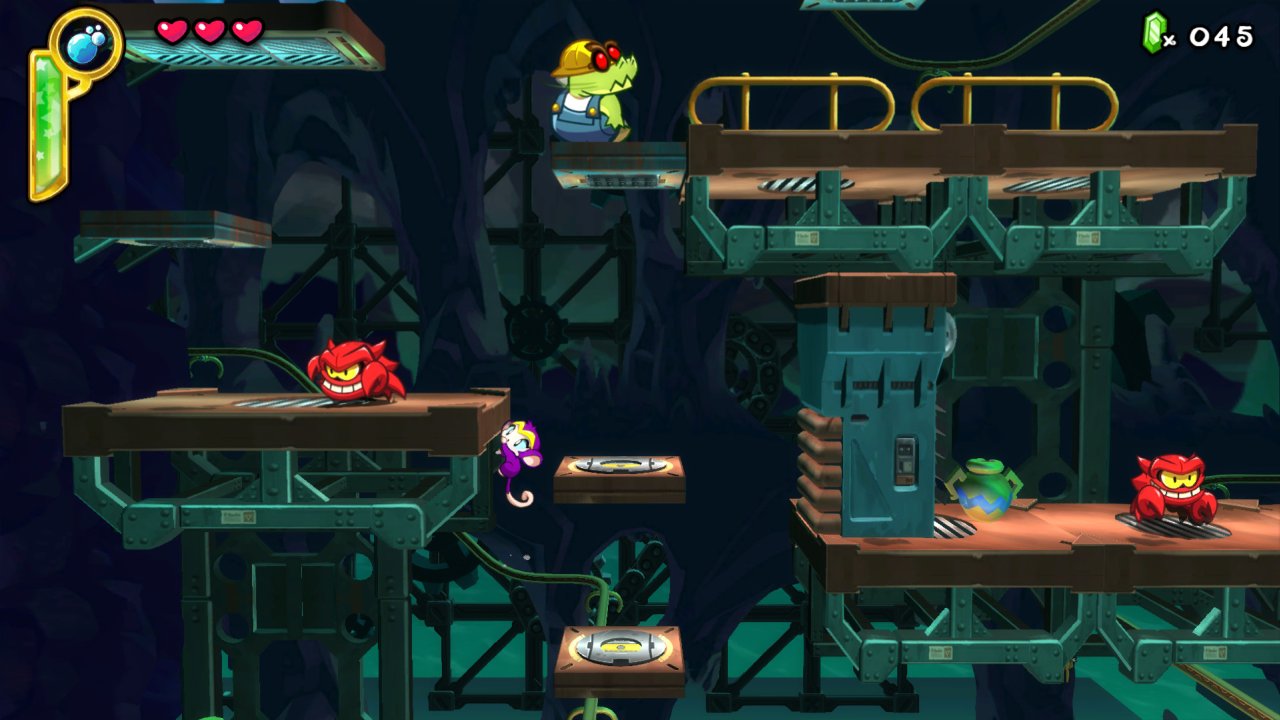 Controls feel responsive and accurate, and level design is varied and creative. While some of the enemy drones are rehashes from older Shantae games, boss battles are a treat, with huge, impressive character sprites and a good variety of attack methods. In those aspects, Half-Genie Hero retains a lot of the series' best gameplay aspects. Where it still falters is in actual progression.

Previous games took the popular ‘Metroidvania' approach of having Shantae explore one large interconnected world instead of individual levels, which allowed her to revisit previous areas with new abilities and items to unlock new secrets and paths. While I know many like the exploratory aspect of the series, it's always felt like a hurdle to me, due to its execution feeling a bit more aimless and reliant on trial and error than most games in a similar vein.

Pirate's Curse helped this a bit by splitting areas into separate levels gradually unlocked and accessible via a traditional world map, and Half-Genie Hero takes the same approach, but still ends up exacerbating at points. Even after you complete each of the six action levels for the first time, you'll need to revisit them with new items and transformations to unlock more items, find alternate paths, and worst of all, do a lot of menial fetch quests.

Considering how often I see this aspect ignored in other reviews for the Shantae games, I think I might be in the minority of disliking it, but Half-Genie Hero's increased emphasis on collecting various trinkets and finding hidden characters to trade them with for mandatory progression might have frustrated me more than the last two entries (I admittedly have never played the Game Boy Color game that kicked off the series). The games really shine when you're doing conventional progression through platforming and fighting, and I still can't help but think that a more linear approach would result in a more streamlined and enjoyable time. 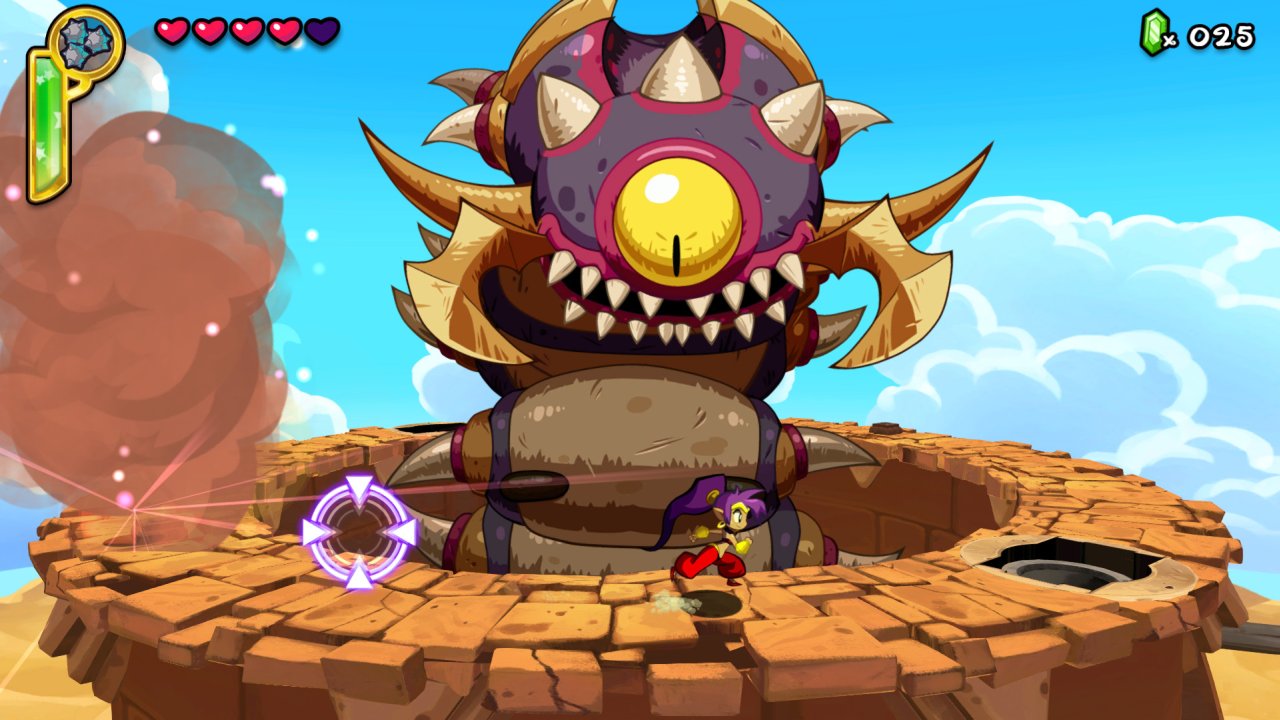 My main guess regarding WayForward's intent here is that, if you were to strip the redundant elements away, you'd have a very short game. I beat the last boss in just under four hours, and though the game offers a more complete ending if you bother to find all of the various collectables beforehand, it seems likely that players will reach 100% in about six hours or so. Considering that the game costs $30 for a physical copy (though a digital purchase is a more reasonable $20), I think many may walk away from it wishing for a lengthier campaign. I certainly think an extra level or two would have helped.

It says a lot that, despite such a notable issue, I still had a very enjoyable time with Half-Genie Hero. The great level design, energized visuals and soundtrack, and refreshingly light-hearted feel help hearken back to some of the best sidescrollers of the 16 and 32-bit eras. The promise of an upcoming DLC campaign focusing on Risky Boots is also intriguing, considering that the pirate items in the last game offered a neat twist on the series' usual abilities. If you are already a fan of the Shantae series or sidescrolling action games in general, there's a lot to like with this game, and I'm curious to see how WayForward will refine things should a potential sequel ever arise.

Our ratings for Shantae: Half-Genie Hero on PlayStation 4 out of 100 (Ratings FAQ)
Presentation
85
Half-Genie Hero provides a grand graphical overhaul, with appealing and well-animated characters that blend well with polygonal environments, witty dialog, and the series' best soundtrack yet.
Gameplay
80
Platforming, exploring, and boss fights live up to the series' solid standard, though the over-reliance on mandatory scavenger hunt-like searching remains a hindrance.
Single Player
70
The journey's enjoyable while it lasts, but the campaign can be finished in under four hours, which will likely leave players wanting a meatier quest.
Multiplayer
NR
None
Performance
80
The game does a good job of keeping a stable framerate free of slowdown, though backgrounds occasionally suffer from an off-putting strobe effect.
Overall
78
Shantae: Half-Genie Hero provides the same great sidescrolling action and charm of previous entries, though it also retains the series' awkward progression mechanics and suffers from a short length. 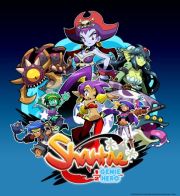