Survival games are hot property right now, but not all are built to the same quality. Popular titles tend to be multiplayer experiences, stuck in perpetual early access, where players start with a naked character, cut down trees with a toothpick, and create skyscrapers with a few planks of wood. Phoning Home is a little different. Aside from not being early access and having no building aspects, it is a linear single player adventure with an end goal. You control a robot—that lacks clothes, so technically naked—and collect resources to craft basic items that keeps him alive and powered in order to contact home. You will take this robot across vast lands in search for resources while escorting a companion that you will wish never existed. 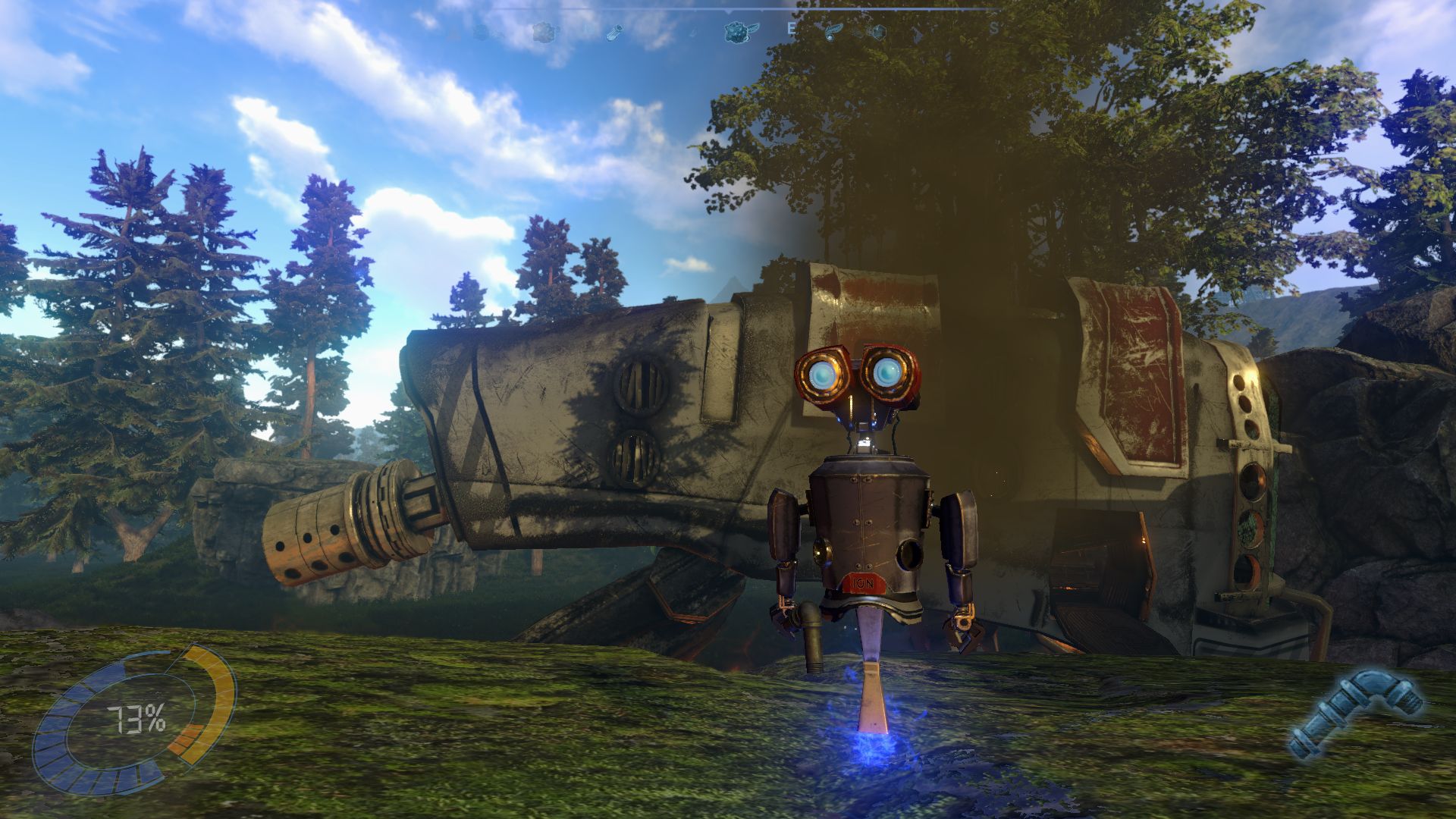 ION has a long, tedious journey ahead

Players control a mobile exploration robot, ION, whose spaceship crash lands on a remote alien planet. You are not alone; the crippled ship is sentient and acts as a guide as you venture onto the surface. Your goal is to inform your home world that you are stranded. But there is something bizarre about this planet, preventing communication and any attempt to evacuate. Strange and infrequent firefly swarms will damage ION unless he vacates the area or shoots them with his blaster. While you begin the journey in a lush forest, various portals will take ION to different biomes around the planet. You will venture across deserts and through blizzards, just to find out more about this strange location in order to get home.

ION's movement systems are basic and clunky. He hovers at an extremely slow pace, just above the ground. Thrusters will launch him a little way into the air to reach ledges, climb rocks, and soar across small chasms. Movement while in the air is minimal, so you will need some forward momentum to reach higher platforms. Thrusting against walls is typically foolhardy because the friction slows ascent. Failing to reach a ledge will lead to ION taking damage.

This is where the resource collection comes into play; to repair and refuel, you need to craft items using resources found across the planet. Minerals, seeds, mushrooms, and other junk need to be scanned before they appear on the radar for easy collection. Like the compass in Skyrim, the radar is a one-dimensional line that shows icons corresponding to each resource. Differentiating between the icons is harder than it should be, but it is tolerable. Trying to decipher resources when several are bunched together is another story. When you upgrade the scan range, even more resources get grouped together which just gets messy.

For most of this resource-hunting journey, you will not be travelling alone. ION comes across another robot called ANI, although she proves to be a liability. ANI rolls along the ground and has no thrust movement, so she is unable to overcome basic obstacles. If there is a small change in elevation, she'll get stuck. If you cruise up a steep incline, she remains at the bottom. ANI even stops in the middle of the flat desert for no reason. You may need to retreat to get her moving again, or, more likely, use the short-range tractor beam to pick her up and move her manually. Having ANI follow you is a full-time babysitting job. 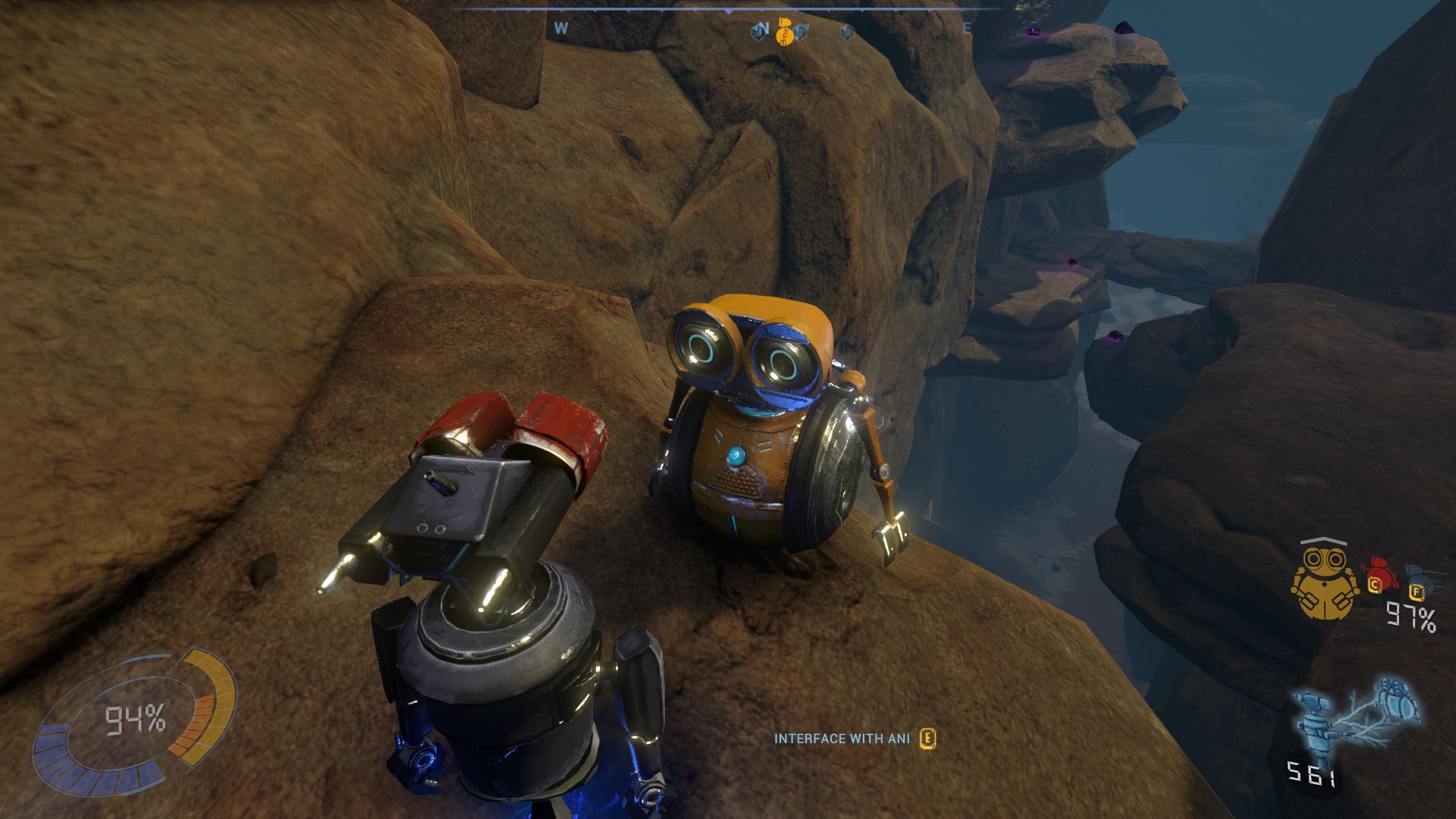 ANI is not built for exploring, so she is prone to corrosion under rain, sandstorms, and blizzards. You are meant to leave her in the infrequently-found shelters—typically alien buildings and caves—until the weather subsides. However, ANI never suffered any corrosion damage during my play through. Some bizarre technical glitch meant she did not need to be placed in shelter or protected with special coating. She merely complained whenever the weather became disagreeable, saying how she would die soon. If the corrosion system worked as intended, ANI would have been a colossal nuisance.

You might be wondering, why not just leave ANI in a shelter and explore the world alone? It is a brilliant idea, but unfortunately one that makes the game unbeatable. She is the only one that can detect a rare mineral that is required to complete the game. If ANI is not around, the mineral does not even appear in its hand-placed locations. So you drag her around, read her constant whining and hope to goodness that this adventure is over quickly before things get worse.

But things get worse when you come across one of the rough platforming sections that are spread throughout. Rocks, alien ships, and world geometry are arranged in a slapdash way to create ledges and obscure points of navigation. Not only is the layout ambiguous, due to the rudimentary world design, these sections require hefty micromanagement of ANI over a long period. Platforming is clunky enough when you have to do it alone, but it is positively uncomfortable when ANI needs to be carried over deadly chasms or dropped into portals from great heights. 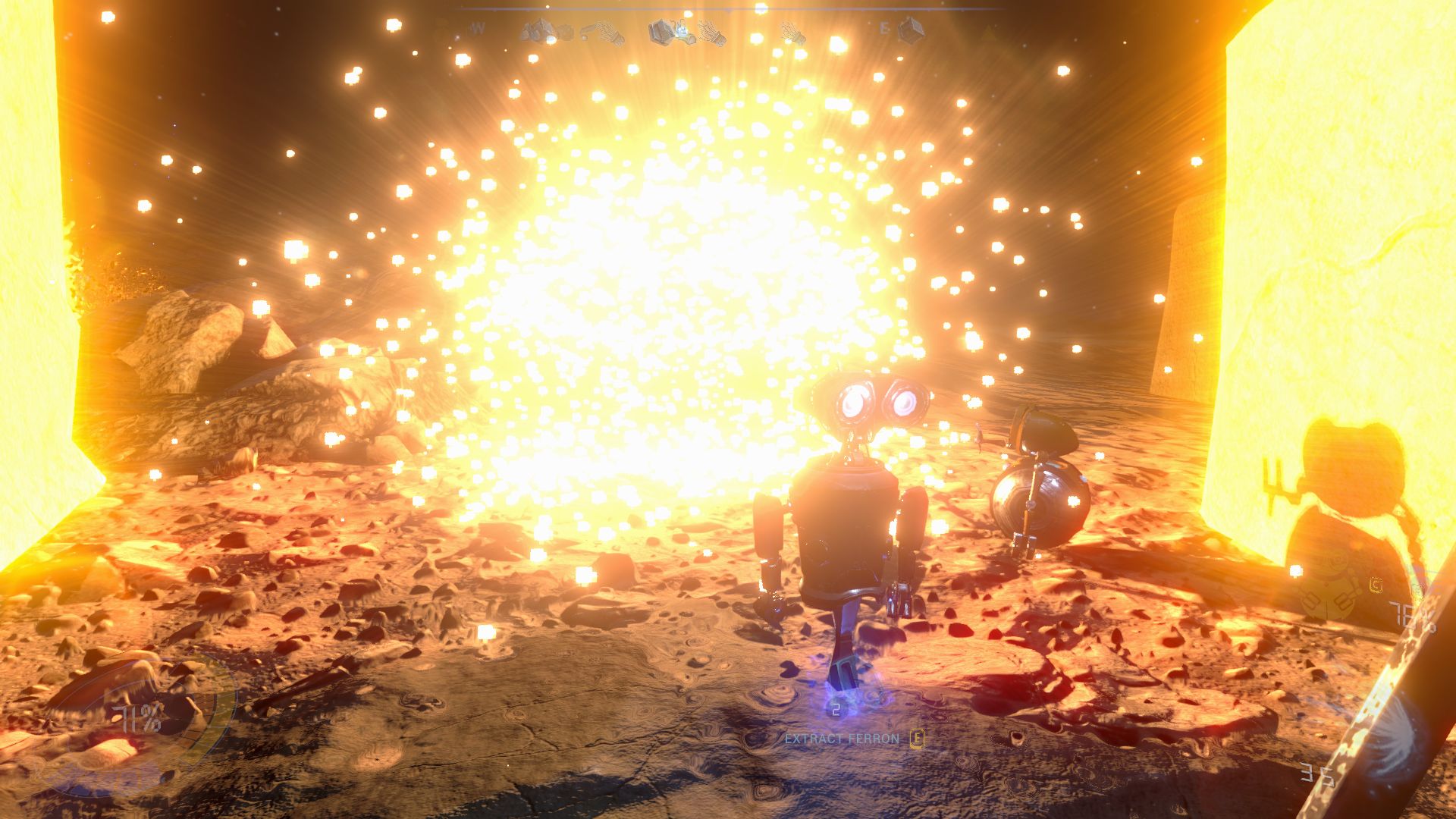 Sometimes these platforming sections use a clever teleportation device, which creates portals between metallic objects. Trying to shoot these portals at range is pretty finicky—more so in the dark thanks to the annoying day/night cycle—but the idea is probably the best part of the whole game. ANI usually follows ION through the created portals, but there is a slim chance she'll decide to go back the way she came while you languish on an iceberg alone. If the platforming sections weren't so long, tedious, and ambiguous they might have been acceptable.

Travelling across the large and empty biomes is the biggest obstacle to enjoyment. Aside from ION's torturous speed, the areas are not pleasant to navigate due to weather effects, mountain layouts, and distances between resources. Most of the adventure consists of ION "sprinting" forward and occasionally checking to make sure ANI is following. Sprinting consumes energy, a resource also needed for teleportation, shields, moving ANI, and the basic combat. It drains modestly, especially when clashing with the handful of firefly-like enemies. Although the swarming fireflies can be avoided, shooting them is often safer because they patrol key locations. ANI does have her own weapons, but her avoidance skills are poor and she will take hefty damage if you aren't providing support. Not far into the desert area, it was clear that my energy reserves were getting dire, so I reloaded an earlier save and spent one hour retracing my steps to collect energy resources for the excessively long trip ahead.

Even though it has many problems, Phoning Home is not without a few positive features. The Unity engine is a favorite of indie developers and it proves capable of producing fairly decent, albeit bland, natural landscapes. The grandiose vistas could be seen as a reward for explorers, although more often than not you are in plateaus that restrict views. There are a few interesting creatures that are sadly little more than window dressing, like the rock monsters that stand in one area and pound their feet. Other presentation components are adequate, like the reasonable music that can maintain calm just as ANI slides down an incline into a fiery pit. Voice acting is relatively professional and there is a fair bit of it—thankfully ANI is not voiced because her audible complaining would be intolerable. 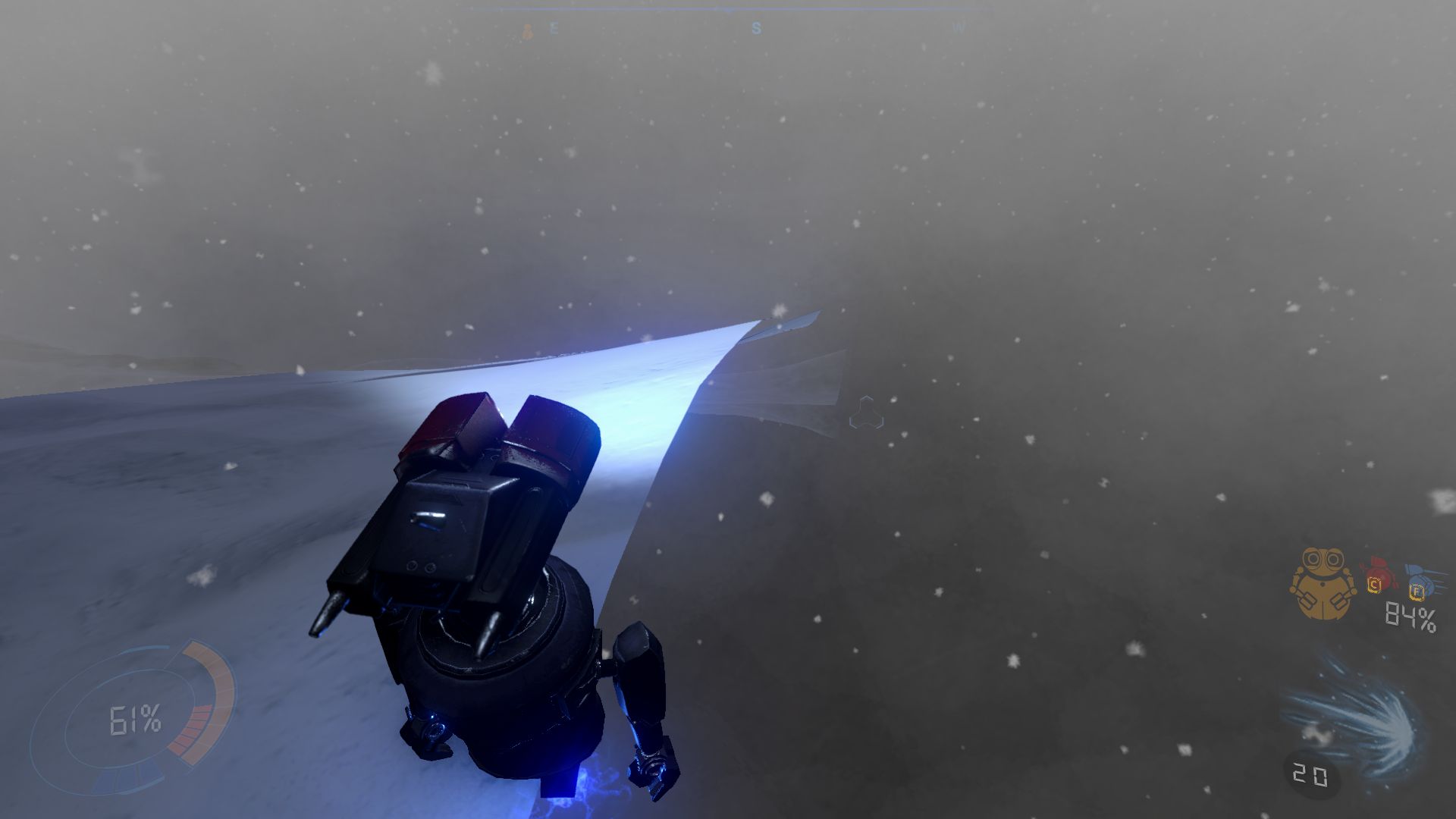 If you aren't living on the edge, you're probably trying to find ANI

Phoning Home is a tedious and exasperating survival adventure with very few positive features. You will spend hours traversing never-ending, bland environments at a snail's pace just to scour for resources with a poor radar system. During this time you will babysit a whiny companion that is unable to navigate over simple obstacles and gets stuck on flat terrain. Then you will try your best to endure ambiguous and clunky platforming sections that require painful micromanagement of that same useless sidekick. The world design is so devoid of good content that the 10 hour adventure should have been far shorter. Who would think that Phoning Home could be so arduous? Next time, I'll write a letter.

Our ratings for Phoning Home on PC out of 100 (Ratings FAQ)
Presentation
62
The Unity engine is capable, but the worlds are fairly plain. There are some cool but underused creatures. Voice work and music is alright.
Gameplay
30
Slowly dragging an incompetent companion through overly-large game spaces, while you collect scant resources, is extremely dull. The platforming is clunky, combat is basic, and pathfinding is a regular source of frustration.
Single Player
50
A slim narrative has you performing tasks that lead nowhere. Dialogue is average and rarely funny as intended. The game often lacks direction.
Multiplayer
NR
None
Performance
(Show PC Specs)
CPU: Intel i5 3570k
GPU: XFX RX 480 GTR Black 8GB
RAM: 16GB DDR3
OS: Windows 10 Pro 64-bit

60
Runs alright, although particle effects can tank the framerate. It's possible to fall through the world, pass through doors, and get stuck in crevasses. There are other bugs with dialogue and corrosion systems.
Overall
50
Phoning Home is a mediocre survival adventure through excessively large game spaces with a slow robot and his inept companion.