One of the game’s strong points is the presentation – during the start of the game, the whole city is presented in black and white and this creates a great atmosphere, almost noir-like. The only color comes from the red flashes of blood and the Nazi banners around the city. This visual setup is definitely one of the game’s strongest points and is well worth experiencing. As Sean completes main story missions though, thereby weakening the German presence in an area, the whole section of the city gains color. These areas of the city no longer look as impressive as they did while still black and white, however they still look good, especially at the area transitions between the Nazi occupied and liberated parts of the city. The liberated parts of the city are now presumably helping the resistance, which adds another fun item to the gameplay – running over or otherwise killing too many civilians within a short time period in these areas will cause the safe houses in the area to become “locked” for a short period of time if Sean has caused a German alarm. This is a fun way to keep the player in check and give them a reason to care for the people in the liberated areas. The areas Sean frees also have a lot less concentrated enemy presence.
As one might suspect, the only enemy in the game are the Nazi soldiers of various types. They all have a field of view, and if they see Sean doing something suspicious (such as climbing, drawing your weapon, fighting or otherwise attracting attention) the alarm meter begins to rise. If Sean stops his current action, the meter will also stop and begin to cool down. There are some areas in the game that are restricted, such as small areas around German military installations that Sean can take out to get paid. If you are seen inside these areas, the meter will continue to fill even if you are not performing any actions. Once the meter fills, the enemy that sees you begins to attempt and blow his whistle to create an alarm – similar to GTA4’s wanted level. However, the fun is that you are given about 2 or 3 seconds to take out that enemy (assuming no other enemies see you) so that he cannot blow the whistle, and no alarm is created. This is yet another fun and quick gameplay addition that benefits the game. Sean can also wear the uniform of any Nazi he killed, though this changes the gameplay as enemies will become alert if Sean is too close to them. There is also optional stealth in the Saboteur, which allows you to perform guaranteed kills if you sneak up on an enemy or use a silenced pistol, though be sure that nobody can see you do so. 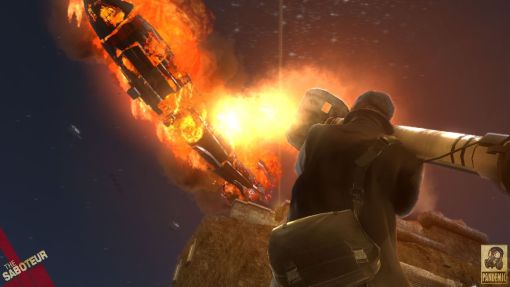 Things will blow up. A lot. All thanks to you.
One element that the Saboteur presents in addition to stealth and action is platforming. Unfortunately, climbing buildings in the game is not very fun or smooth. Developers tried to present Sean as a very realistic character and they succeeded – but it’s not very fun to play. Sean can climb almost anything, and all of his movements are realistic enough to showcase that he hasn’t done this very much before, and is simply climbing it as a regular person would. While realistic, this makes for very slow and uneven experience. Sean is rather slow and awkward when moving from one ledge to another, though it’s not often that he will miss; so at least there is no trial and error gameplay. What’s even worse though, is that Sean finds it very difficult to drop down to a ledge from the edge of an object such as a roof. Hitting the drop button does not do anything – the only way to begin climbing down from a standing position is to walk off the ledge and watch Sean scramble to grab on – an experience that keeps worrying you that the start of any descent could end in a fall. It’s not all his fault though – the city’s architecture, while beautifully and accurately designed – is simply not meant for smooth platforming. The roofs are very uneven and present difficult slopes and tiny ledges, so it feels as though the world was designed to be realistic, with actual gameplay taking a back seat for this part of the game.
Prev123Next 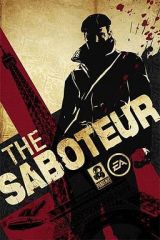