Warhammer deserves better than this bloody mess in space

The coveted Warhammer fantasy franchise has often made an appearance in video games, though more frequently in recent times as creators Games Workshop have relaxed their licensing rules. From the more traditional and fitting adaptations in strategy games such as Dawn of War and Total War, to the action games such as Warhammer: The End Times – Vermintide and Warhammer 40,000: Space Marine, and even mobile side-scrolling games. It seems that the brand is everywhere in gaming these days, and the latest entry comes in the form of a first person shooter Space Hulk: Deathwing from Streum On Studio. While apparently faithful to the source material, Deathwing suffers from a lack of polish and generally lackluster mechanics. 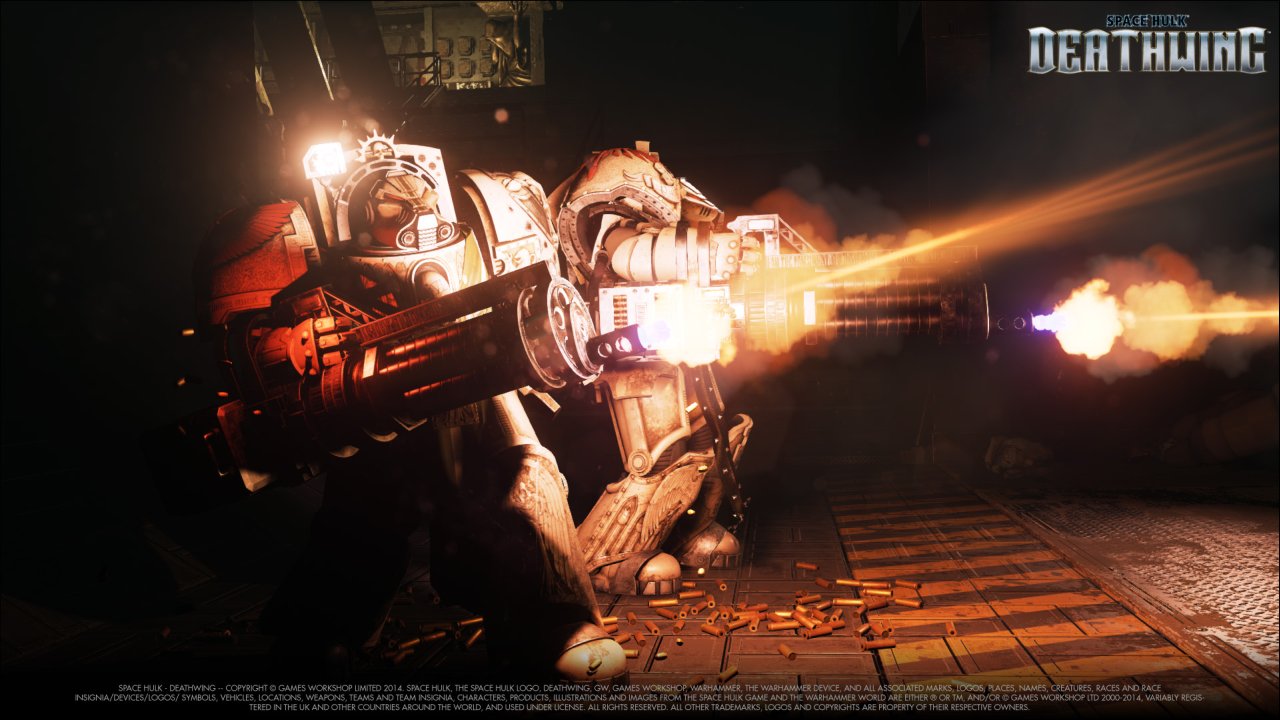 If you’re deeply familiar with the lore of Warhammer, you are probably going to enjoy the game a lot more than newcomers. Players assume the role of a Librarian squad leader from the Deathwing of the Dark Angels Chapter of Space Marines. These are super elite soldiers with a sole purpose is to eliminate whatever threatens their existence and way of life. You and your brothers are clad in special Terminator armor and utilize heavy weapons, to ensure maximum devastation. The game follows your squad’s deployment onto a space hulk – which is a term that refers to the wreckage of a starship(s) found drifting through the vacuum. Hulks often exit and re-enter the Warp seemingly at random, so when one appears, you are quickly dispatched by the Imperium of Man faction to investigate it, and dispatch of any foes onboard.

The story that follows is relatively basic, as you navigate through a series of environments and ships, exploring the depths of the space hulk and what happened on-board. Fans of the Warhammer 40,000 universe will enjoy this much more than those unfamiliar with the setting, as mentioned, since the game makes little attempt to inject any basics into the dialog or tooltips. You’re simply thrown into the game and presumed to know what the various names, factions, and lore references mean. It’s definitely not possible to make sense of all aspects of the story without doing some external reading to get some basic understanding of the universe and the terminology.

Players will be exploring the internal compartments of the space hulk via a series of corridors, which are often broken up by larger rooms. The corridors feature many dead ends, be it via debris or malfunctioning doors. Since you and your brothers are hulking warriors, they are unable to crouch or jump, so your only option is to take the long way around. A map always shows your location and the entire area without a need to explore, so you can see exactly where you need to go. Thus, despite having a variety of intersecting areas and seemingly large levels, you’ll mostly be travelling along a linear path. 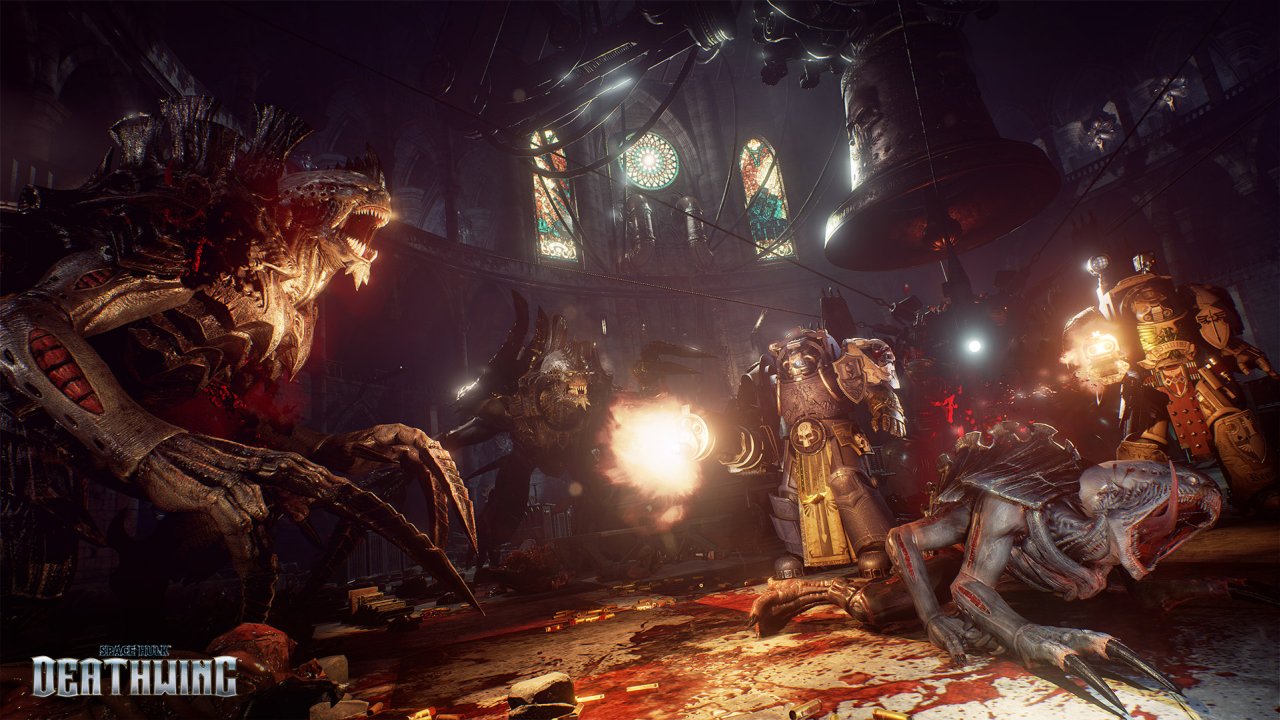 While things are quiet, the game does manage to be a bit immersive. The attention to detail in the environments is commendable, and the Gothic style architecture of the space ships you visit can feel daunting. Though it’s certainly not the most impressive game visually – even on highest settings, textures and effects are lackluster, and the menus are extremely basic – the game still manages to create an oppressing atmosphere. That’s a good thing, because at times it feels like you walk for a while (the ability to run is limited) with nothing happening, and nothing to interact with. Take a wrong turn, and you could end up in another dead end, and have to walk all the way around again to reach your destination. It can feel rather claustrophobic and also boring, to trek down these corridors for a while with nothing to do. Aside from a few collectibles, there's nothing else to do in the levels besides head towards your objectives. You can interact with the occasional door or break a wall, but that's about it. In a bit of clever design, you can shoot some pipes and light incoming enemy hoards on fire.

So once the action picks up, you’d hope that so would the fun factor, but that’s not the case. Hordes of Tyranid creatures soon begin flooding whatever area you’re in, and your squad must fight to the bitter end to fend off the threat. Players have access to one of five combat classes, each with their own stats and weapon sets, ranging from the typical melee-focused fighters to heavy weapons damage dealers. You can customize your loadout via unlockable gear for each class. You’ll usually be carrying a traditional rifle for ranged damage, a melee weapon, and also have access to a psychic attack on a timed cooldown, such as shooting a bolt of lightning across the battlefield. The three skill trees can be used to improve abilities and unlock new ones.

It all sounds fine in theory, but when all hell breaks loose, the game just becomes a chaotic mess. Other games – like Vermintide, Left 4 Dead or Killing Floor 2 – feature similar levels of action but still manage to very clearly let players perceive their actions and the resulting effects. Not so in Deathwing. With so many foes, and most of them being melee attackers, your screen very soon becomes covered in nothing but blood, visual effects, and bodies. All sense of fun and strategy goes out the window as you wildly swing, shoot, and spam your psychic attacks because it’s literally impossible to tell what is happening. Enemies rush into your face, you swing wildly for a few minutes until the area is reduced to a red mist, and move on. It becomes worse during moments when enemies attack in corridors rather than the larger rooms. Here, there’s not even enough space to step to the side and re-position yourself in hopes of gaining any sort of visibility into the encounter. The action just doesn’t appear very impactful either, and your attacks don’t feel very meaty or satisfying. 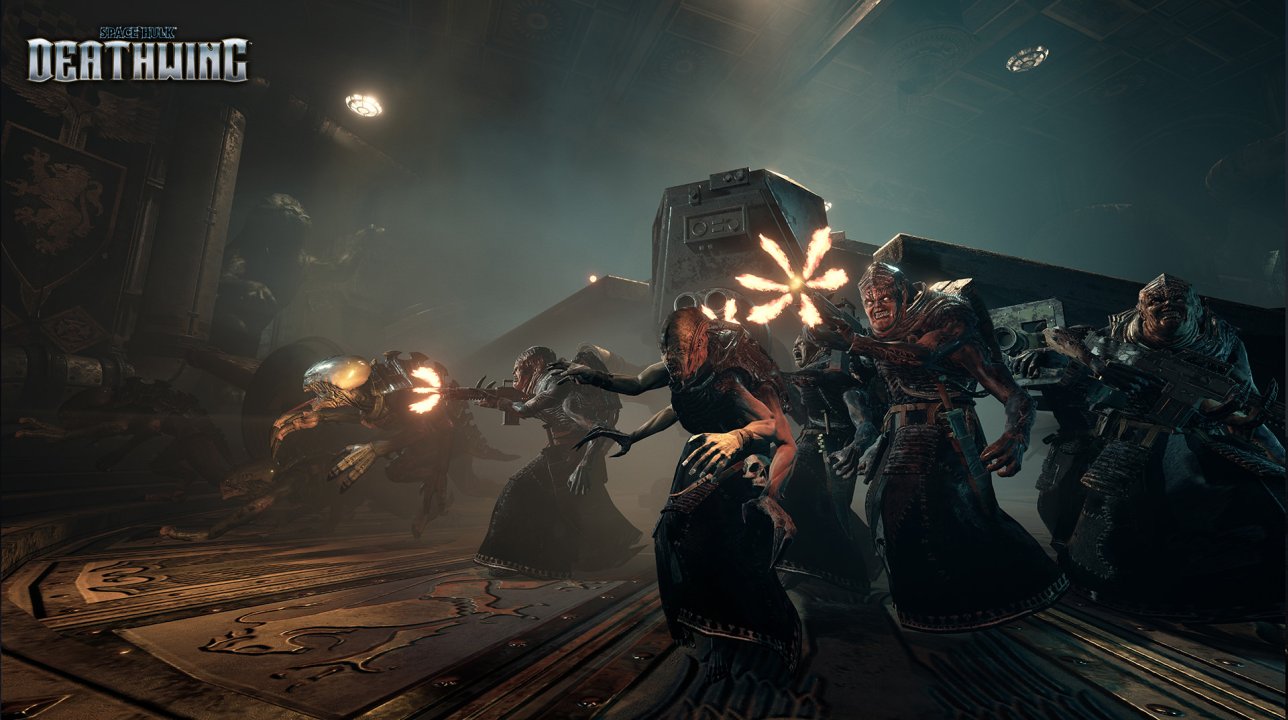 With so many enemies mindlessly rushing your squad, the AI isn’t exactly smart. This causes issues when they get stuck somewhere in the level after spawning, and you have to go seek them out before your objectives can be updated and the level can resume. The same goes for your two AI squadmates (whose loadouts can also be tweaked). While you can order them manually to perform actions – such as moving, attacking targets, following you or interacting with an item – they don’t always understand what you want. In combat, they will just stand around and, like you, shoot at everything they see. They won’t even heal each other (or you) without issuing a command manually – a pain to do because of the interface, doubly so in the middle of combat. You and your squad can also perform a few miscellaneous actions but they feel tacked-on. For example, the ability to block a door seems useless – there’s never a scenario where enemies spawn behind you only and there’s a chance to escape/block them off, nor do enemies randomly wander the levels. Hacking turrets is annoying and cumbersome to do via its own map interface.

After you’ve completed the nine mission main campaign, with some difficulty spikes and a forgettable ending, you can venture through the content again with friends. Up to three friends can join you in LAN or online cooperative play, to go through the game’s chapters with some variations and in any order. You also level up separately online, and players should note that the default multiplayer mode doesn’t actually save your character leveling progress – you need to go into Codex mode so that everyone can access all weapons from the get-go. It certainly helps to play with humans who are more competent at shooting and healing than AI companions, but because the enemy spawns are always the same the need for teamwork is actually rather minimal. As enemies funnel into the room from specific locations, it becomes almost boring as you sit in a corner and mow down wave after wave. Even still, technical issues will hamper your multiplayer experience. For example, the game lacks voice chat options so be sure to bring actual friends into the fray. Mission objective markers can get stuck or not show up for your teammates if you’re the host, resulting in confusion. Connectivity problems also reign supreme. Despite having modest visual quality and no overly demanding physics or gameplay mechanics, Deathwing manages to struggle with performance. The framerate can be frustratingly unstable, even on lower settings, but the bigger annoyances come from the random lockups and crashes to desktop. This affects both the campaign and multilayer.

As has been mentioned, Deathwing can at times feel atmospheric, but the presentation isn't exactly top-notch. It all looks very true to source material and the characters are quite detailed, but many of the textures and effects are of rather basic quality. The unrelenting grey color palette covered with buckets of blood, while immersive at first, does become repetitive. Speaking of blood, that's about all that gets left behind after enemy encounters, as the bodies of hundreds of creatures you mow down simply disappear. The UI design is very barebones and almost feels like it was designed a decade ago; there is no way to skip mission briefing intros and transitions, and there are a few typos throughout. A barely-there soundtrack kicks in during combat, but most of the ambient sounds are dull and easily forgettable; your squad remains largely silent throughout the adventure. Last, but for some players certainly not least, the game should really have a photo seizure warning. As you're mowing down enemies with your machine gun in close proximity, it emits a very bright flash-like effect which lights up your whole screen, and then further gets reflected off the blood and bodies of enemies, all right in your face. This all results in bright flashes that take up your entire view, and could certainly cause issues for some players. 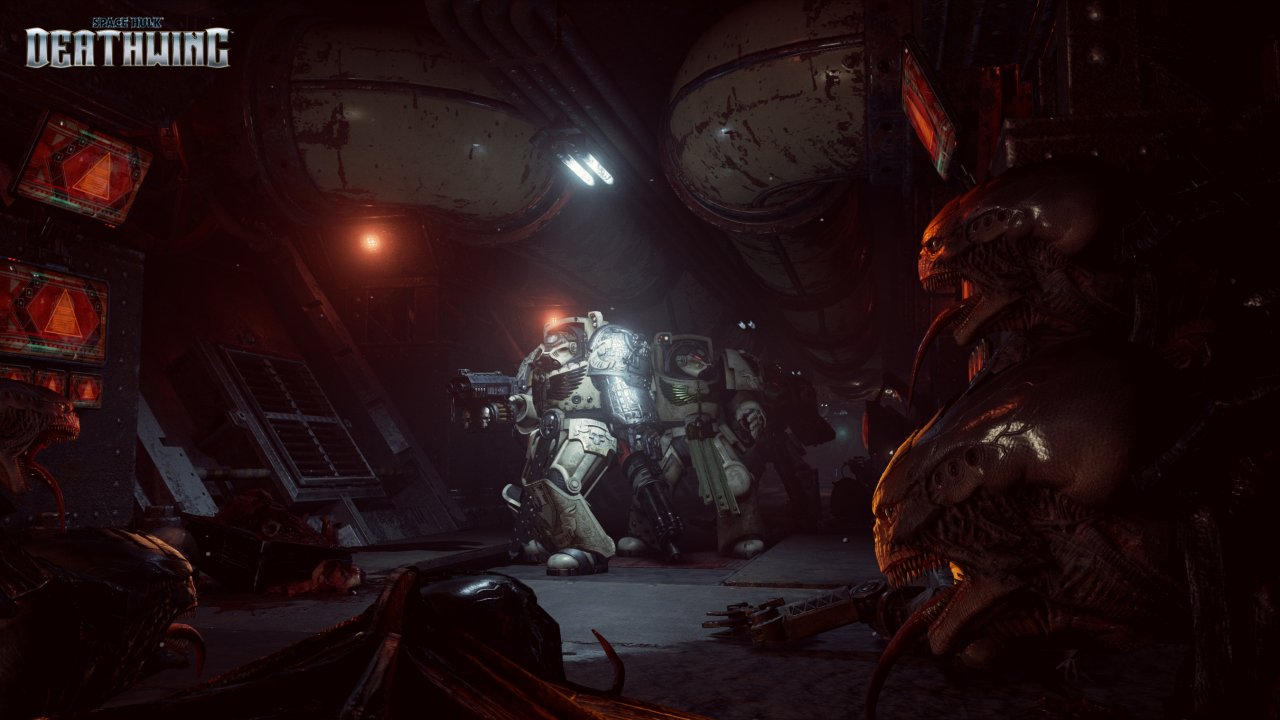 Space Hulk: Deathwing is a game that has some potential, especially to please the hardcore fans of the greater Warhammer universe, but its shortcomings in almost every area prevent it from earning a recommendation even for that group of players. The rather dull and repetitive gameplay, the poor combat design where you are unable to tell what is happening on screen, the spikes in difficulty, and the abundance of technical issues - it all combines to produce a largely lackluster game that needs several patches and perhaps a modest price drop before it could be seriously considered. Those new to Warhammer will find this a poor starting point to enter the narrative universe. Thus, Space Hulk: Deathwing is a faithful but quite underwhelming entry in the long line of recently released Warhammer games.

Our ratings for Space Hulk: Deathwing on PC out of 100 (Ratings FAQ)
Presentation
65
Somewhat atmospheric, but visual and audio quality leave much to be desired. UI is very basic, with occasional typos.
Gameplay
48
The basics of an intense action game are there, but execution is lacking. It's difficult to tell what is going on, and the combat doesn't feel very impactful.
Single Player
60
A faithful adaptation that requires some prior understanding of the Warhammer universe. Largely linear level design and shallow AI.
Multiplayer
47
Connectivity issues, lack of voice, and various online-specific bugs and issues.
Performance
(Show PC Specs)
CPU: Intel Core i5-4670K @ 3.80 GHz
GPU: ASUS Radeon R9 280X DirectCU II
RAM: 16GB DDR3
OS: Windows 7 Professional 64-bit

35
Constant crashes, poor framerate, bugs, and so on.
Overall
51
With underwhelming presentation, disappointing gameplay and lots of technical issues, Space Hulk: Deathwing fails to live up to its potential. The game attempts to stay true to the source material, but even so requires players to be familiar with the Warhammer universe. 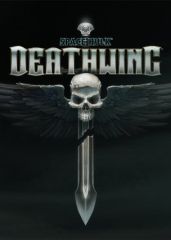