The premise for Killing Room embodies what "I’m a Celebrity" might look like if Suzanne Collins had penned the script, or Ant n’ Dec had been appropriated by Victor Frankenstein. Bright-eyed, determined and noticeably foul-mouthed, you’re the lucky newest contestant on Killing Room: a sadistic TV gameshow that sets players against genetically-engineered monsters in order to win it big. With but a meagre pistol to my name, I was left to fight my way across a gruelling multi-levelled complex, avoiding traps, mashing monsters and evading damage to ensure my fleshy body remained intact enough to taste the ephemeral glories of televised fame. All while ensuring my antics made for satisfactory prime-time TV. I’m not usually one for reality-television, but in a wisecracking FPS shooter with rogue-like elements, it’s an angle that finds itself oddly suited to Killing Room’s house of homicide, if occasionally proving bothersome. 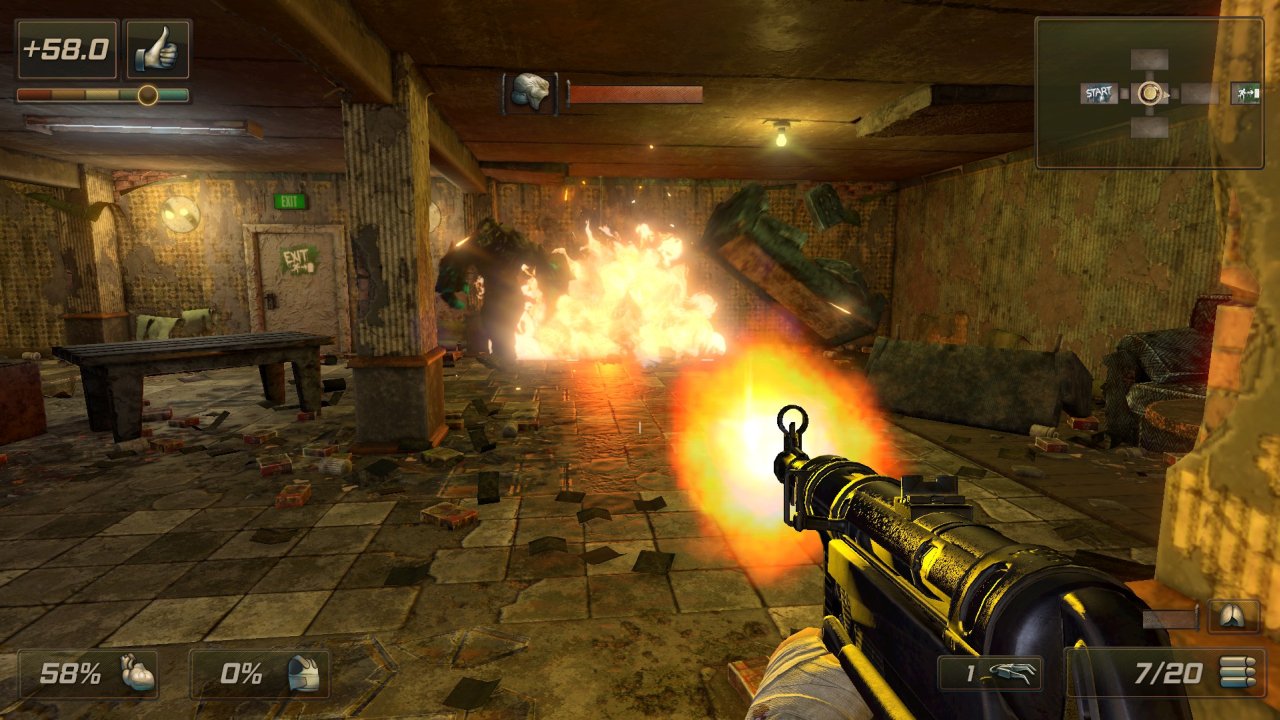 Against Killing Room’s setup, the phrase ‘no pressure’ comes to mind, but honestly pressure appears very much part of the game’s tagline. Your bloody escapade unfolds across eight themed levels, each consisted of two standard rooms and a boss area. Tapping the charming frustrations of The Binding of Isaac, combat is contained within a series of square rooms, with each proffering a selection of grotesque creations. Similar still is their attack style, for their weighty group attacks (and unnerving swiftness) motivate almost constant movement. As a corpse would make for a woefully static gameshow, you’re kindly granted a health bar; but it’s predictably paltry enough to ensure turning each doorknob doesn’t kill you. It’s common for health to be halved in a couple of hits, and since there’s no hailed ‘safe zone’ in which to heal your wounds (again, safety ain’t all that entertaining), staying mobile and avoiding hits is often tantamount to ensure you survive the round. Oh, and if you do snuff it (and expect to), you’ll find yourself re-materialised at the entrance of Floor One; a quality that (despite the lamenting cries it admittedly attracts) inputs a thrilling sense of risk that prevents the game's samey stage-progression from staling.

Your pistol isn’t your only port of call, for a selection of other firearms lay in wait across Killing Room’s floors that can be alternated between during fights. Sturdy bolt-actions, hyped-up machine guns and nippy twin-pistols are all available for the taking, each offering a distinctive style of play that renders weapons reasonably diverse, and effective for particular enemies. The machine gun, for example, is particularly useful for group encounters, while the bolt-action provided sturdier aim that afforded each of my hits a well-placed heft, and provided some welcome relief during some of the later stages. The pistol (itself with infinite ammo) makes for a handy last-resort, but ultimately ammo capacity is so paltry that it was really only useful as an assurance that I was never empty-handed.

Nestled within a genre that often prides itself on unforgiving gameplay and twitchy combat segments, the world of the Killing Room stands out with a distinct prettiness, albeit one undeniably grotesque. Almost the antithesis of Isaac’s simplistic Flash approach, these dingy madhouses adopt that noxious green palette familiar to Arkham Asylum, and there’s something vaguely Bioshock-ish about its dishevelled hallways that lends a pleasing shiver to the prospect of what lurks beyond each door. Each grim kill floor proffers its own monstrous menagerie, comprising floating baby-heads and hard-hitting shadow-demons to dutifully pulverize you. As with DOOM’s demonic onslaughts, standard enemies don’t often require much to obliterate, yet their tendency to attack in flocks often renders standard encounters amidst the most rewarding moments in the game. Though my frosty meet-and-greet with a colossal Jack Frost was a treat to behold, it was most often my submersions amid gliding needle-jawed snowmen and explosive xenomorph-types that most often had me grinning. 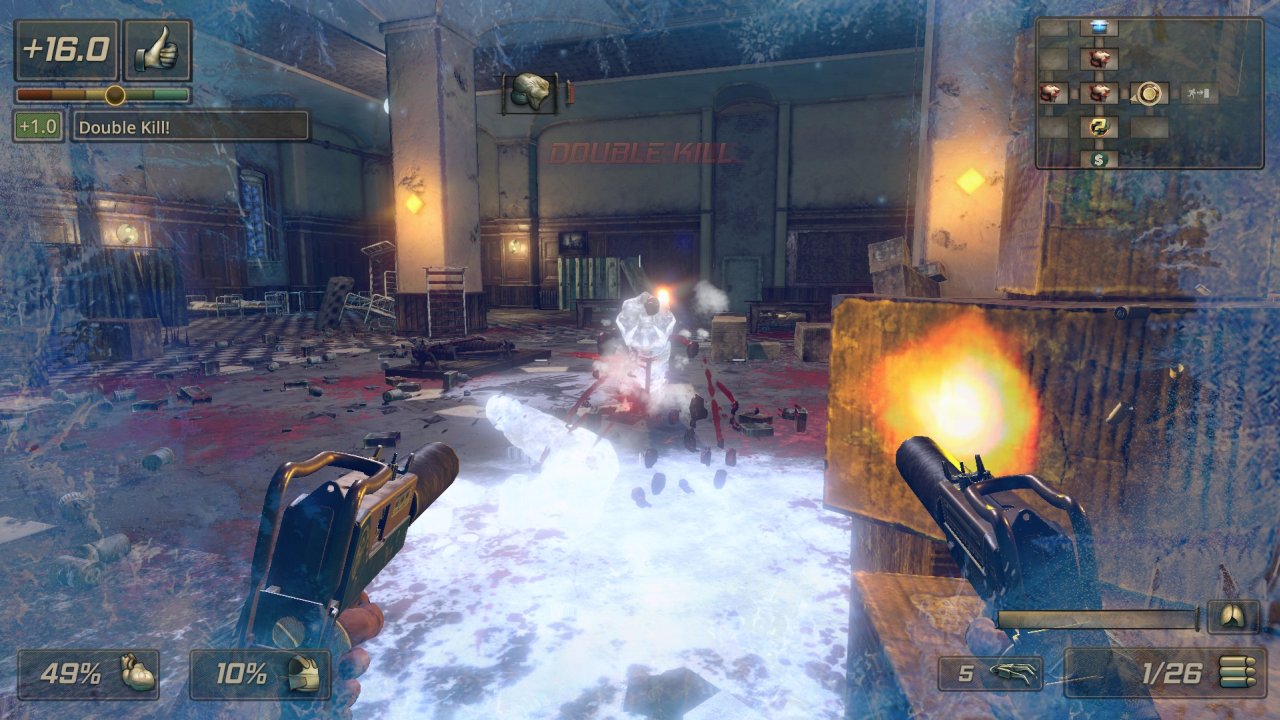 Though bosses are virtually suped-up versions of their floating counterparts, all possess their very own brand of hideousness. One floor observes a sandworm that vomits its spawn in attack, while another is home to a grimacing flesh-potato with an enthusiasm for all things explosive. Given the ultimate repetition directing each level, Killing Room’s freaky entourage often proves a thrilling diversion to keep encounters interesting, though (given your low starting health and their heavy hits) can initially prove unforgiving for roguelike beginners. All undeniably possess their own predictable attack patterns, however, that (once you’ve them sussed), tend to render encounters more a feat of memory than an adaptive rodeo.

There are also a various items littering the battlefield, to fuel your televised slaughter sessions. While some items grant health boosts from enemies killed, other might lend your armour and health a little support; something that tends to come in handy when you’re still learning the ropes. Others offer to make battles a little more interesting by compromising your efficacy in combat. A portion of the adventure was interrupted by undulating rainbows and psychedelic clown-faces superimposed on my screen; something that generally feels at home with the game’s mocking humour, if occasionally seguing into annoyance.

Though its roguelike setup feels akin to Isaac (and enemy AI to DOOM), Killing Room’s own gimmicks shine just brightly enough to ensure they’re not lost in the fray. Though living to see another door is heartily recommended, keeping your ratings up can often make battling foes a touch less painful. Audience approval most often climbs when violence is on the cards; sending monsters into blistering oblivion by shooting explosive gas canisters, for example, can send your ratings soaring, and (if maintained following each floor’s culminating boss) bag you special items to use later on. But like a devilish Christmas list, it’s often the extent of your popularity that dictates the efficacy of your ‘gift’. My brief acclaim as a ‘Hero’ buffed my ammo capacity, for instance; while other successful exploits offered such additional abilities as double-jump and increased speed. 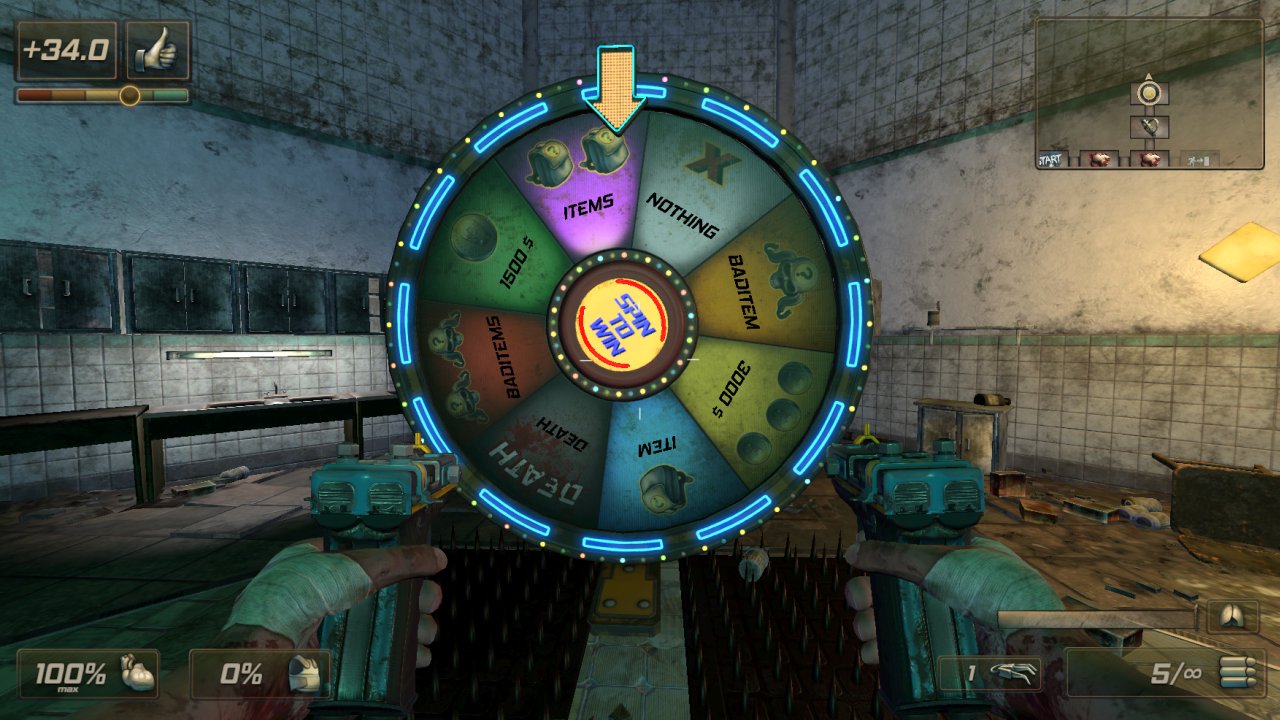 While potentially benevolent, however, your vicious viewers aren’t an empathic bunch, and anything from opening coffins (apparently, disturbing the dead is amoral) to buying health and defence boosts in-match will quickly lose you brownie points. While appearance of audience-approval in Killing Room is almost forgiving in that it’s not technically required to progress (something rogue novices may find a relief), upsetting your audience too much might leave you donning a wet t-shirt to double-up your vulnerability to cold, or encountering certain loot less regularly than you might otherwise.

This being said, the punishment pervading Killing Room’s deadly carnival rarely feels unsavoury. Throughout my eight floors of slaughter, I was routinely de-limbed, gnashed and chargrilled, all while being laughed at for my abysmal human weakness. There’s something ever-so-slightly school bully-ish about Killing Floor’s digital audience; a derisive jeering that lends a grim sense of fun that really hammers home the game’s uniquely parodic concept. Indeed, despite reaching a Facebook-relationship-worthy familiarity with its death screen, I couldn’t help but scoff along with my viewers as I muddled through to the next room. It’s not bullying if you laugh with your attackers, right?

But yet, the characteristic funniness doesn’t always gel well with the game’s roguelike pursuits. In a game in which enemy damage, scant ammo supply and oddly-placed scenery render death a near-certain eventuality, one might expect a relatively candid death-screen. Hotline Miami and The Binding of Isaac both treated losses straightforwardly, with death-screens providing a swift way of resuming play, without dwelling on the soreness of previous attempts. The prolonged guttural scream attracted from Killing Room’s protagonist strikes irritating in comparison, and after hearing the same emphatic ‘NOOOOO’ time after time, what appears an attempt at go-ham humour ultimately slows down the experience. 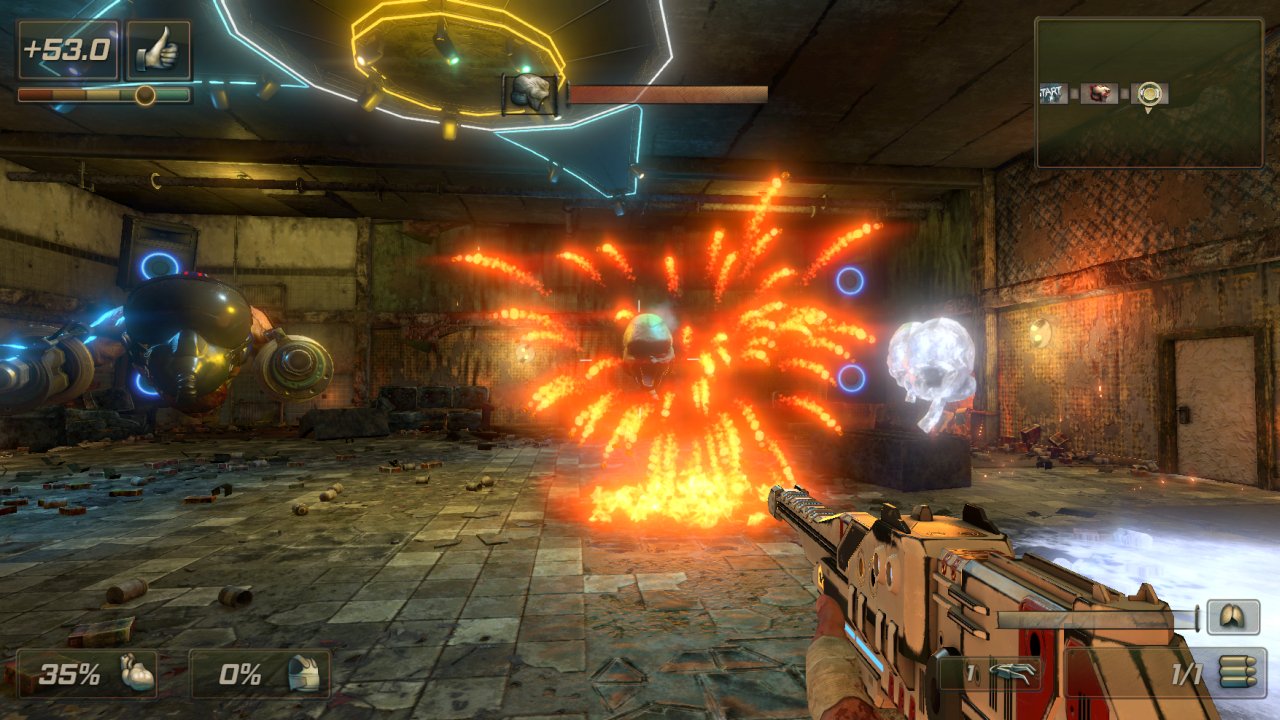 The slowness unfortunately seems to afflict the game’s performance; the patchy framerate caused unwarranted disorientation, causing regular drops that rendered it difficult to keep my bearings during some of the more saturated fights. While unacceptable in any game (apart from the scant few titles that successfully use them to ‘go meta’), technical slipups like these can make a swift, mobile approach to combat unpalatable at times. As such, though the visuals were undeniably there, their consistent interruption helped only in beefing my death tally – and in a way that struck unfortunately cheap against the promising sense of humour.

The Killing Room is an unforgiving place – for positive and negative reasons. Its satirical, reality-TV edge and creatively-designed brutes make for a uniquely fun dungeon-crawl, while the ever-looming threat of permadeath ensures (what might’ve otherwise been largely repetitive) stages never truly lose their pulse. A scant ammo supply and recurrent technical slowdowns can too often culminate in frustratingly frequent deaths, but hey, at least there’s an audience somewhere tuning in to enjoy my pain. Let’s just hope Netflix doesn’t get any ideas.

59
The framerate is liable to drop during larger encounters with multiple enemies, which can result in unnecessary frustration during some of the heavier battles, given their focus on swift and constant movement.
Overall
67
Killing Room's onscreen murderhouse makes for a challenging roguelike shooter, and its reality-TV slant injects the sadistic premise with a welcome touch of humour; even if it routinely finds itself punctured by irksome design details and patchy technical performance.