Retro to a fault

In my 25 years of gaming, the platforming genre has remained my favorite. Hours spent on Mario, Donkey Kong, Mega Man, and many other classics in the 16-bit days kept me interested when Super Mario 64 and Crash Bandicoot marked the genre’s leap to 3D. While the genre dramatically dipped in prevalence during the last generation of home consoles, the sidescroller subgenre has seen a gradual comeback with the rise of indie games, including critical darlings like Braid, Fez, Super Meat Boy, and Ori And The Blind Forest, along with occasional AAA titles like Rayman Legends. Even the 3D style has become primed for a revival, with this year’s well-received Ratchet & Clank reboot, The Kickstarter hit Yooka-Laylee in the works for next year, and recent gems like Super Mario 3D World. 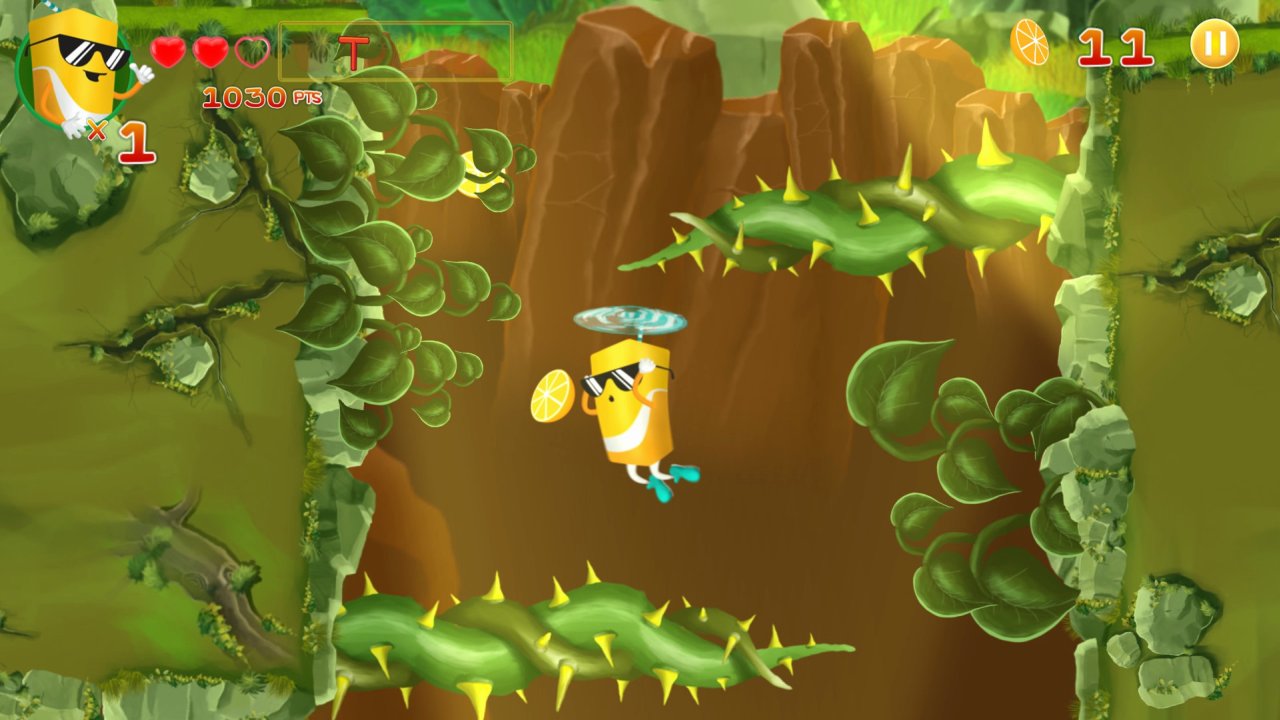 The PC in particular has become home to a plethora of sidescrollers by indie developers, and one of the latest titles that seeks to provide a return to the old style of platforming is Indio Games’ Orange Adventure. The game’s main selling point on Steam lists it as a tribute to the Super Nintendo and Genesis era, and it definitely boasts many trademarks of platformers from those days. Unfortunately, most of them aren’t positive ones, as this particular title ends up far too generic and flawed to stand out in today’s market.

You control the titular Orange, a walking juice box with a pair of shades that give me a major Cool Spot vibe, on a journey over dozens of 2D levels, avoiding enemies and stage hazards and fighting back with conventional hop-and-bop mechanics. Progression isn’t only a matter of reaching each level’s endpoint, as you need to collect six explosive parts (Three dynamite sticks and three parts for the plunger) to destroy a crate at the end containing a giant orange if you want to move on.

This is a decent foundation, but where the game starts to falter is how it actually plays and controls. Actions are only limited to jumping and running, with a button for an optional sprint, but Orange’s momentum and speed often feel imprecise and floaty. Hit detection is also a major issue, as Orange’s big, boxy shape feels overly susceptible to damage, and landing on smaller, moving platforms often feels imprecise, with several instances of falling through the side of one when I felt I should have properly landed on it.

Progression can also feel unnecessarily halted thanks to an overly strict health and checkpoint system. In old-school platformer fashion, Orange can take three hits before dying, but replenishing hearts feel sparse, as do mid-level checkpoints. Sloppy level design and a view that feels a little too zoomed in also mean that you’ll encounter a lot of deaths that don’t entirely feel like your own fault. 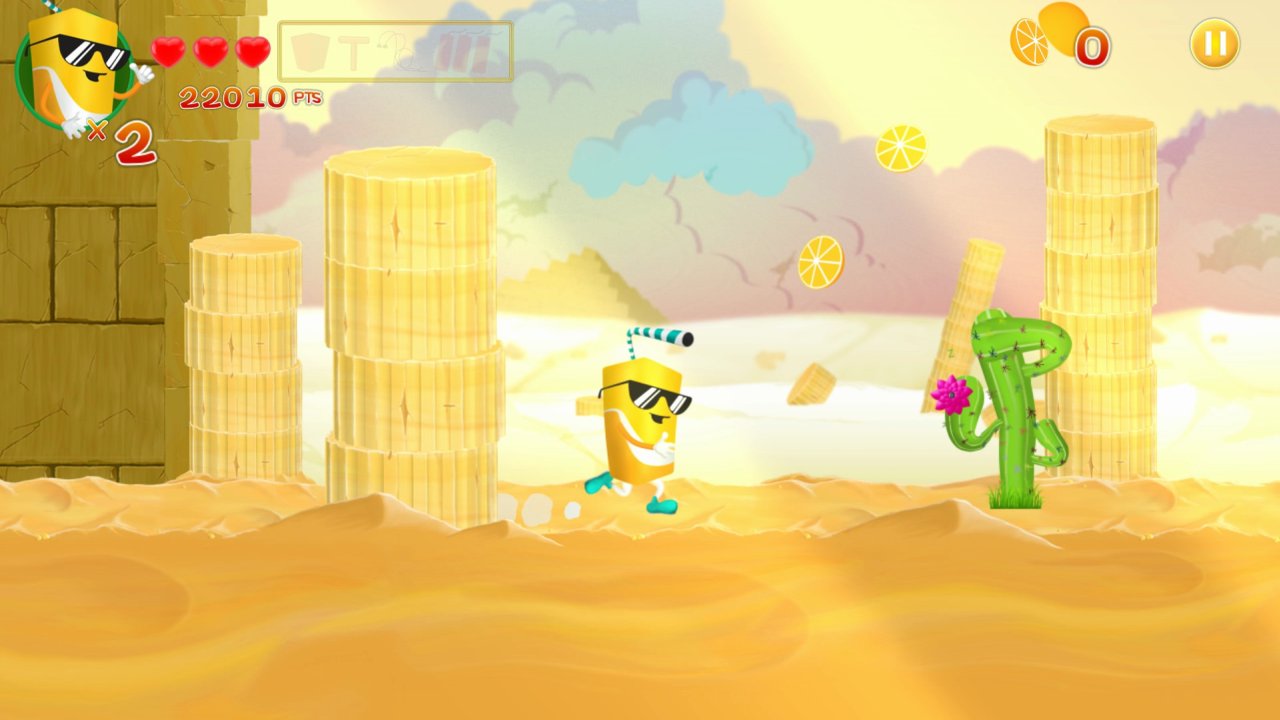 Occasionally, the game mixes things up a bit by throwing in an automated vehicle section, with skiing straight out of Sonic 3 and mine carts straight out of Donkey Kong where your only input is timing jumps. These aren’t too bad, but also feel bland and sloppy at points, especially considering how unimportant bouncing off hovering enemies feels compared to the games Indio clearly drew from.

The game’s graphical style isn’t all that bad, with warm color palettes and decent environmental detail, but it still feels quite uninspired. Enemy variety is limited and generally feels stock and routine, with recurring flying insects providing a lot of frustration with their rapid movement and annoyance with their constant buzzing. There’s next to no dialog or text to give the game any personality, save for a bizarre typo straight out of the infamous NES days of bad translation. When you run out of lives in a level, get used to seeing the game console you with, “Ups! Try again!”

The aural aspects are also generally forgettable. No sound effects stand out as interesting (Outside of the aforementioned obnoxious insect buzzing), and outside of occasionally catchy tunes, like a jaunty, Banjo-Kazooie-esque song for a skiing stage, I can’t recall a single note to the musical score. The game could have helped lessen the frustration of its level design with some amount of personality or charm, but for the most part, that’s nowhere to be found.

Thankfully, technical performance is generally sound, though I frequently encountered a bizarre glitch where pressing a button after losing all lives, which typically spits you back to the map screen, would put me back in the level for a split second beforehand. It’s certainly better than encountering game-breaking technical issues, but it doesn’t help the lack of polish the game already has. 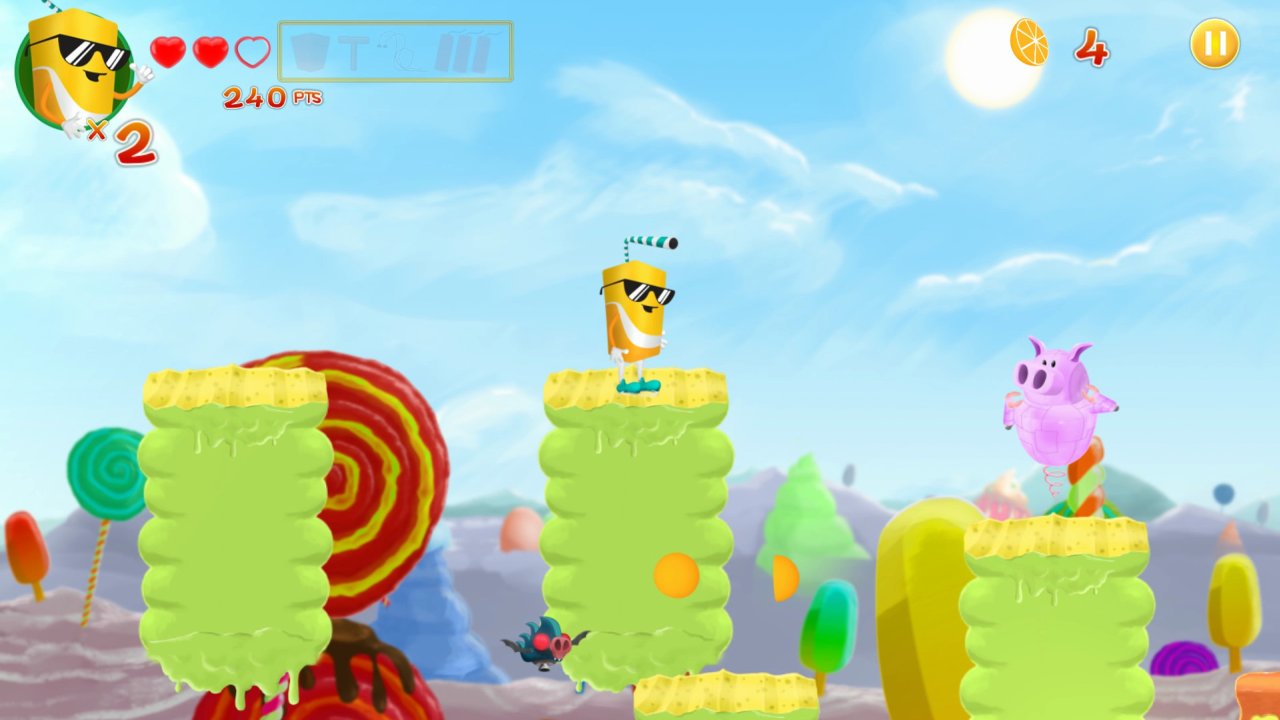 The campaign of around 40 levels can be finished in a handful of hours, with little incentive to return unless you’re a completionist interested in obtaining 3 possible stars for each level (One for completion, one for finishing with full health, and one for collecting all the little fruits that serve the same function as Mario’s coins). This aspect feels reminiscent of an iPhone game, and indeed, the look of the game’s menus make me suspect that it was designed with smartphones in mind. Thankfully, Xbox controllers are supported, though a very frustrating decision to quit a level when you press B instead of Start while in the pause menu caused a lot of annoyances for me.

I will always love platformers dearly, and still revisit classic sidescrollers to this day, but I found little to enjoy in Orange Adventure. Titles promoting themselves as retro throwbacks often sound enticing and can turn out quite good, but it’s easy to forget that the days of retro gaming were just as plagued with mediocre to terrible games as today. Other than more modern graphics, this feels like something that, if released back in the era it hearkens back to, it would have made very little impact and be completely forgotten even among the most nostalgic. Unless you feel the urge to try every indie sidescroller on the planet, there is very little to justify spending time on this.

Our ratings for Orange Adventure on PC out of 100 (Ratings FAQ)
Presentation
60
The characters and environments use an art style that contains some charm despite an overall uninspired feeling. Few musical tracks stand out, and the game’s main recurring text boasts a hilariously strange typo.
Gameplay
45
Routine level design, combined with imprecise controls and hit detection as well as frustrating enemy and obstacle placement, make for a platforming experience more akin to lesser old-school platformers than the classics.
Single Player
50
You can get a handful of hours out of the campaign for the game’s low asking price, but there’s not much to go back for afterwards unless you’re a platformer completionist.
Multiplayer
NR
None
Performance
(Show PC Specs)
CPU: Intel Core i7-6700HQ
GPU: Nvidia GTX 970M
RAM: 16GB
OS: Windows 10 Professional

80
The game runs smoothly in both windowed and fullscreen mode with full gamepad support, though you may experience brief glitches after losing all your lives.
Overall
55
While the idea of a throwback to classic 16-bit era platformers has merit, Orange Adventure mostly squanders it with clunky controls and frustrating, archaic game and level design. 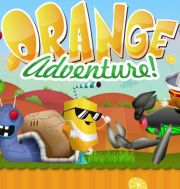