A flawed but charming hand-crafted adventure

For longtime Nintendo fans, many of the Mario franchise’s dips into role-playing territory are up there with conventional platformers and kart racers as one of the iconic series’ most beloved and long-running genres. Since Squaresoft developed Super Mario RPG 20 years ago, other developers have established both the handheld Mario & Luigi games and the primarily console-based Paper Mario games as ongoing series, offering simplified takes on conventional turn-based RPG combat with a lot of creative and funny stories, characters, and locations that go beyond the Mushroom Kingdom gamers already know. 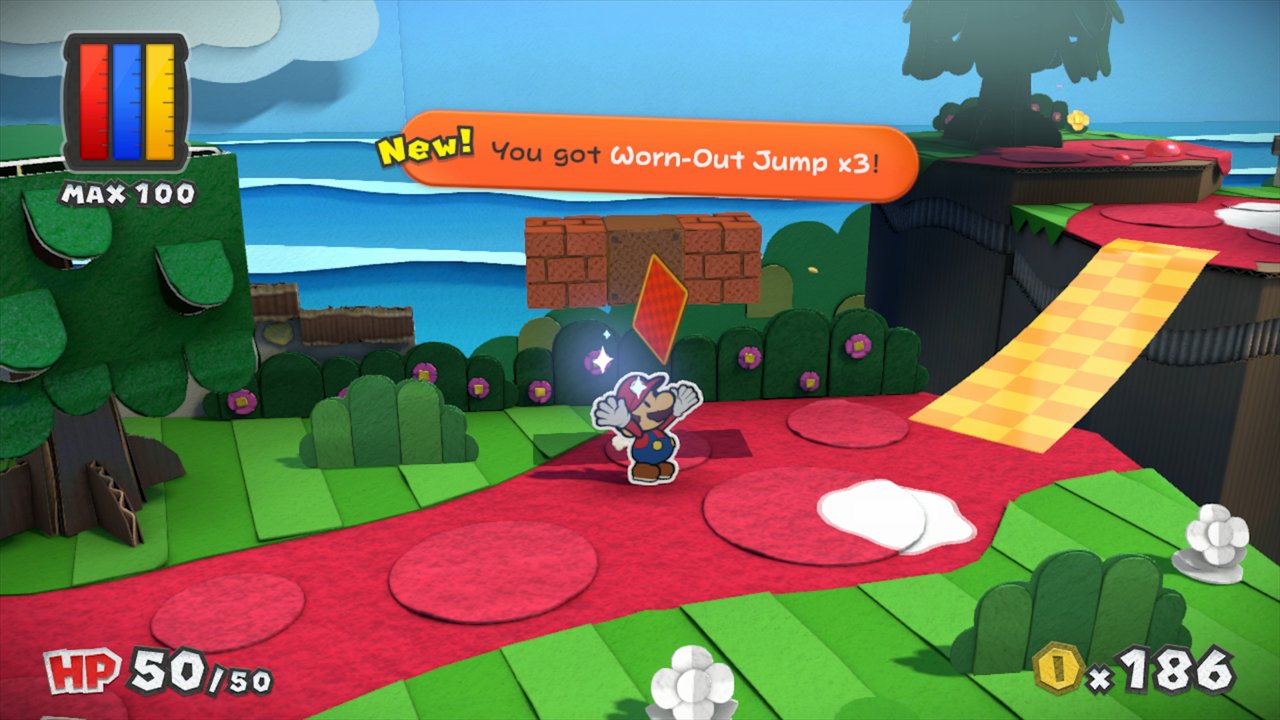 However, while the Mario & Luigi series has generally stuck to a similar template through all its entries, Paper Mario has been something of a different beast. The Nintendo 64 original and its Gamecube follow-up The Thousand-Year Door stuck to a near-identical formula, but the Wii entry Super Paper Mario took things in a wild new direction by converting the gameplay to a real-time sidescrolling platformer similar to traditional Mario games.

The series’ next entry, Paper Mario: Sticker Star, while more similar to the first two games, also went in some very different directions. Party members besides Mario himself were removed, moves in battle were now performed via consumable items, and the story and cast were simplified, as series creator Shigeru Miyamoto felt that the constant introduction of new characters and elaborate plots had become unnecessary. I do think that Sticker Star was a fine game on its own merits, but it did end up feeling too watered down for its own good, and I still stumble upon fans griping about the game years after its release. As a result, the announcement of Paper Mario: Color Splash, the franchise’s first HD entry, brought apprehension for some when it was confirmed to be building off Sticker Star’s fundamentals.

And yet, while Color Splash certainly makes several of that game’s mistakes, it still ends up a more entertaining experience overall. There’s a ton of creativity, one of the funniest scripts Nintendo’s ever delivered, and surprisingly, some of the best graphics on the Wii U. Newcomers to Mario’s RPG escapades will find an accessible and lively time, and veterans willing to roll with the changes will find a solid adventure as well.

Mario, Princess Peach, & Toad are summoned to the far-off Prism Island, a once-happy place thrown into chaos by Bowser’s latest plan. Once arriving at the island’s main port, it becomes clear that the Koopa King’s army is draining the land and its inhabitants of color, leaving desolately white environments and comatose Toads in their wake. Thankfully, they soon encounter Huey, a sentient paint can who tags along with Mario and gives his hammer the ability to collect paint and return color to the world. From there, Mario and Huey set out to recover the magical color-generating Paint Stars from Bowser’s clutches, journeying through a large variety of imaginative levels, helping Toads in need, and facing off against many enemies before taking on Bowser himself. 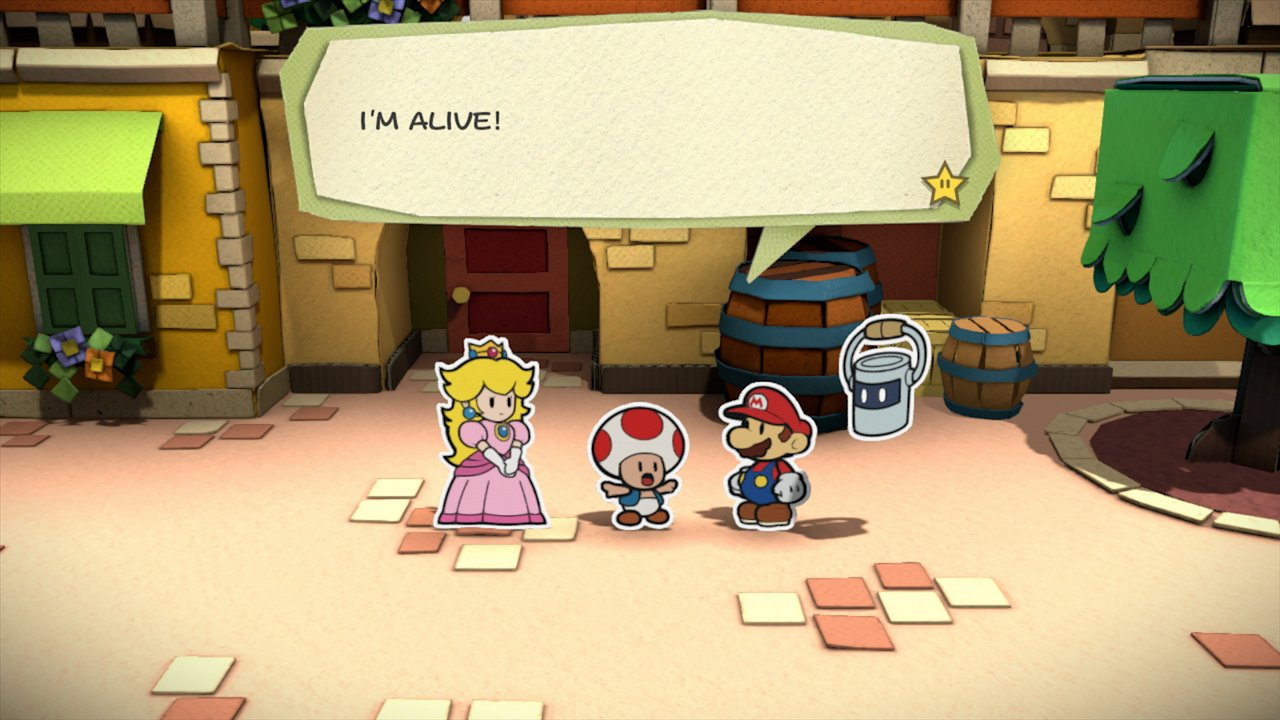 Like every Mario RPG before it, Color Splash is much more reliant on story and dialog than the plumber’s platforming titles, and there is thankfully a lot of imagination and charm to find in its writing. Though there’s no proper voice acting and Mario still never participates in conversations, the game is packed with genuinely witty and clever exchanges and scenarios from allies and enemies alike. Huey provides well-timed quips for many situations, the various Toads you meet have entertaining quirks and subplots, and you even get darkly hilarious moments, like a Shy Guy taking time to sit with Mario and reflect on his hollow existence and shattered dreams as a grunt in Bowser’s army.

The caveat to all this is that the reduced variety in character types still feels needlessly restrictive, and I often got sick of seeing mostly identical Toads and the same enemies I’ve jumped on since the Super Nintendo days. Miyamoto’s observation of too many creatures being continuously introduced to the Mario world isn’t without merit, but I feel that it would make more sense to retain and build on types introduced in previous Paper Mario games rather than build a sense of repetition. On the plus side, the game doesn’t commit to this completely, as Huey is a fun new addition, and the iconic Koopalings finally make their Paper Mario debut as bosses.

Rather than a conventional series of interconnected areas, the game builds on one of Sticker Star’s best changes, with an old-school overworld map and dozens of isolated and unique levels. Level unlocks and overall progression also feels reminiscent of the template set by Super Mario 64, as each level has 1 or more Paint Stars that will each unlock different paths. Not only does this approach provide an opportunity for levels to be more unique and not overstay their welcome, but it’s a clever implementation of iconic Mario game structures.

Navigation is almost identical to earlier games, with various 3D level exploration and non-randomized enemies roaming about that can be battled once touched (Mario can also give himself an early advantage by hammering or jumping on an enemy to initiate a battle, which will grant him a preemptive attack). The actual battle system builds on Sticker Star’s revamped mechanics, and it’s still one of the less successful aspects of the package. 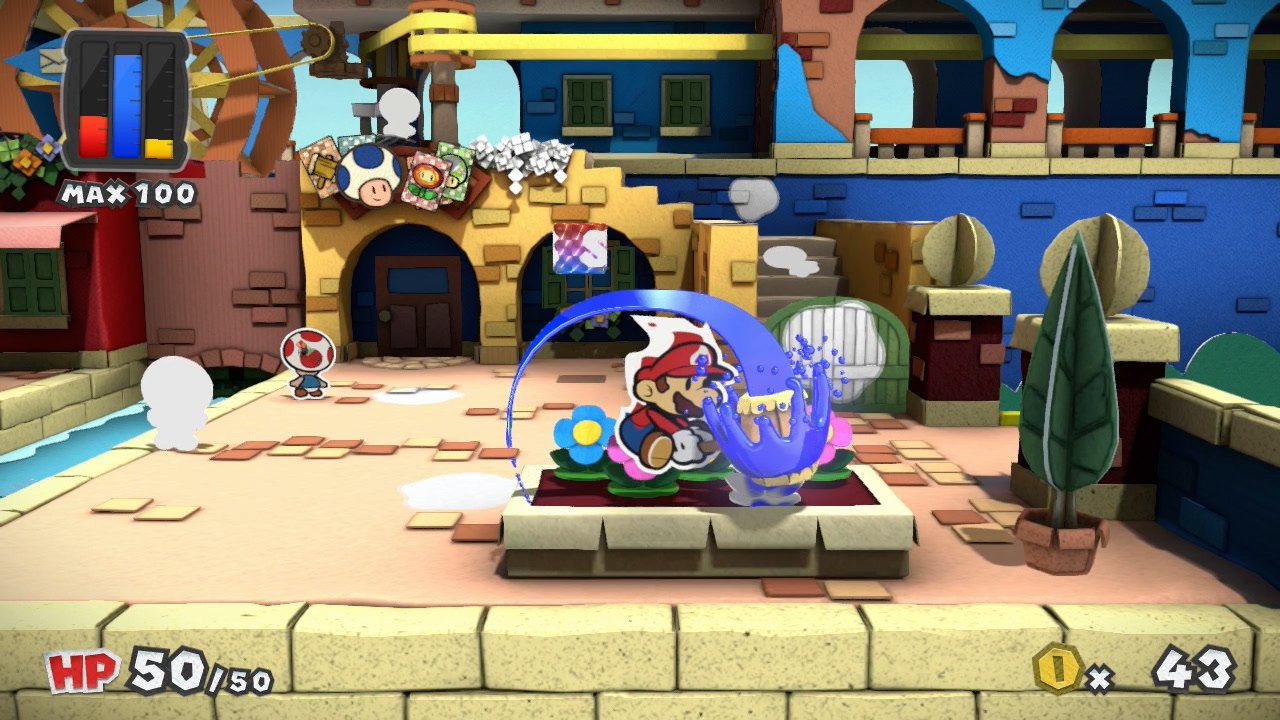 Rather than a conventional menu of attack options, Mario can find and purchase many different cards that each provide a one-time use of different moves and items. While this does away with the common RPG frustration of running out of MP at the worst possible time, as you can hoard more powerful moves for battles that require them, the controls for this are clunky. All your cards are always laid out in one horizontal row on the GamePad that you need to scroll through instead of having easy classification, and the game both encourages you to add paint to selected moves for extra power and then do another input to finally start using them. Combine this with the fact that you can’t manually target individual enemies (Mario automatically goes from front to back with each move until his next turn starts), and you have a system that manages to be both too simple and too complicated for its own good.

Thankfully, all these hindrances don’t prevent battles from being easy to understand, and the various attacks, which now include the option to summon familiar enemies like Goombas as attackers and one-time shields, are easy to grasp and often satisfying to pull off thanks to meters that require timed button presses for maximum damage.

It also helps that, while conventional experience points are MIA, victories still reward you with an important collectible, that being cutout hammers that eventually expand your maximum paint capacity. And make no mistake, paint isn’t just a plot device here. Besides the aforementioned powering up of moves, outside of battle, Mario can do a secondary move with his hammer that functions like a hard-hitting paintbrush, restoring vibrant colors to the many areas and characters drained of their liveliness. Restoring a little spot to normal and being rewarded with coins and cards is a cute little gimmick that manages to not feel tiresome throughout the lengthy adventure.

A new feature is Mario’s Cutout ability. Outside of battle, the Y button can be pressed at any time to highlight the current on-screen area and possibly reveal dotted outlines over specific structures. If you’re at the right place and have the right camera angle, the outline can then be traced with virtual scissors on the GamePad’s touch screen, allowing Mario to warp himself to that cutout area and access areas he couldn’t otherwise. This feels a bit gimmicky, but the tracing segments are too brief to really irritate, and it feels satisfying to discover a new area to alter, as they’re not always very obvious. 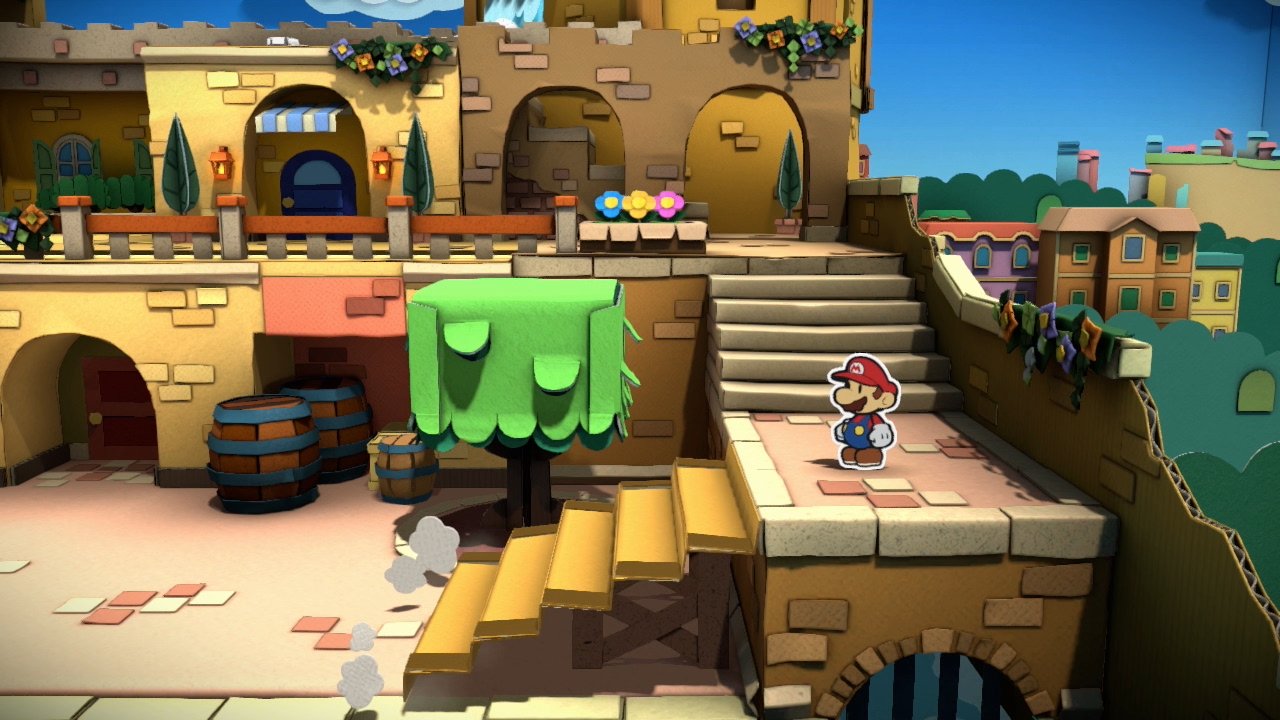 The last important feature is the very rare set of items referred to as Things. Initially appearing as fully polygonal props in set locations, Mario can convert these into one-use cards, which can either be used as the most powerful attacks available in battles or in levels themselves, such as summoning a giant fan to whisk a shipwrecked Toad back to shore. This adds an adventure game-like aspect to Color Splash, since it’s essentially a recreation of classic inventory puzzles. And much like that genre, it’s both satisfying to see the results of a properly-placed item and occasionally frustrating figuring out what to use and where to find it, though a hint-giving Toad in the main hub helps alleviate that a bit.

Finally, it would be a sin for me to not bring up Color Splash’s surprisingly fantastic visuals. With its simple 2D characters and papercraft-like environments, the Paper Mario series has always felt to me like one that embraces graphical creativity over pure eye candy, but Nintendo made some visible effort bringing it to high-definition consoles for the first time. The levels and characters have more visible textures, subtle shading helps to add a more lush atmosphere, and for special occasions like the Thing cards in battle, occasional photorealistic 3D graphics are among some of the Wii U’s best. The series’ best soundtrack yet helps add to the charm as well.

It’s not often that I come across a game with glaring flaws in its basic mechanics and still come away generally charmed, but Paper Mario: Color Splash is a rare exception. Its iffy battle system and reduced character roster should have irritated me a lot more, but everything else surrounding them was incredibly charming and fun to experience. While I think a future entry in the series combining the witty writing and gorgeous presentation with mechanics similar to the first two games would be a perfect compromise of the series’ best overall elements, I actually won’t be sad if whatever comes next continues to build on this. This isn’t one of Mario’s absolute best RPG adventures ever, but it may be one of his most endearing.

Our ratings for Paper Mario: Color Splash on Wii U out of 100 (Ratings FAQ)
Presentation
85
Paper Mario’s handcrafted world transitions to HD consoles far better than one would expect, and the music, creativity, and writing are among the series’ best, though a lack of diverse characters unnecessarily restricts things.
Gameplay
73
Exploration and certain set pieces are fun, but a battle system that feels both dumbed down and needlessly cumbersome makes constant fights a chore at points.
Single Player
85
Though the lengthy campaign doesn’t throw new mechanics at you constantly, the compact nature of the levels and the game’s continually creative moments keep it engaging.
Multiplayer
NR
None
Performance
80
Though locked at 30FPS, the game doesn’t suffer from noticeable frame drops or lag.
Overall
78
Paper Mario: Color Splash makes some mistakes that prevent it from being one of the iconic plumber’s best role-playing outings, but its level of creativity, wit, and overall charm is irresistible, resulting in a very entertaining time. 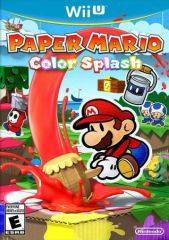