Battlezone is the PlayStation VR debut title for Rebellion Developments, the team best known in recent years for their Sniper Elite franchise. The game is inspired by the 1980s arcade title of the same name, which is coincidentally considered by some to be among the very first examples of virtual reality implementation in video games. The arcade game combined 3D visuals with a special viewing scope to create its immersive effect. Now, over 30 years later, Rebellion hopes to bring back this franchise in the appropriate medium of modern VR. The result is a blend of real time tank combat, unique roguelike campaign design, all at an unreasonable price point. 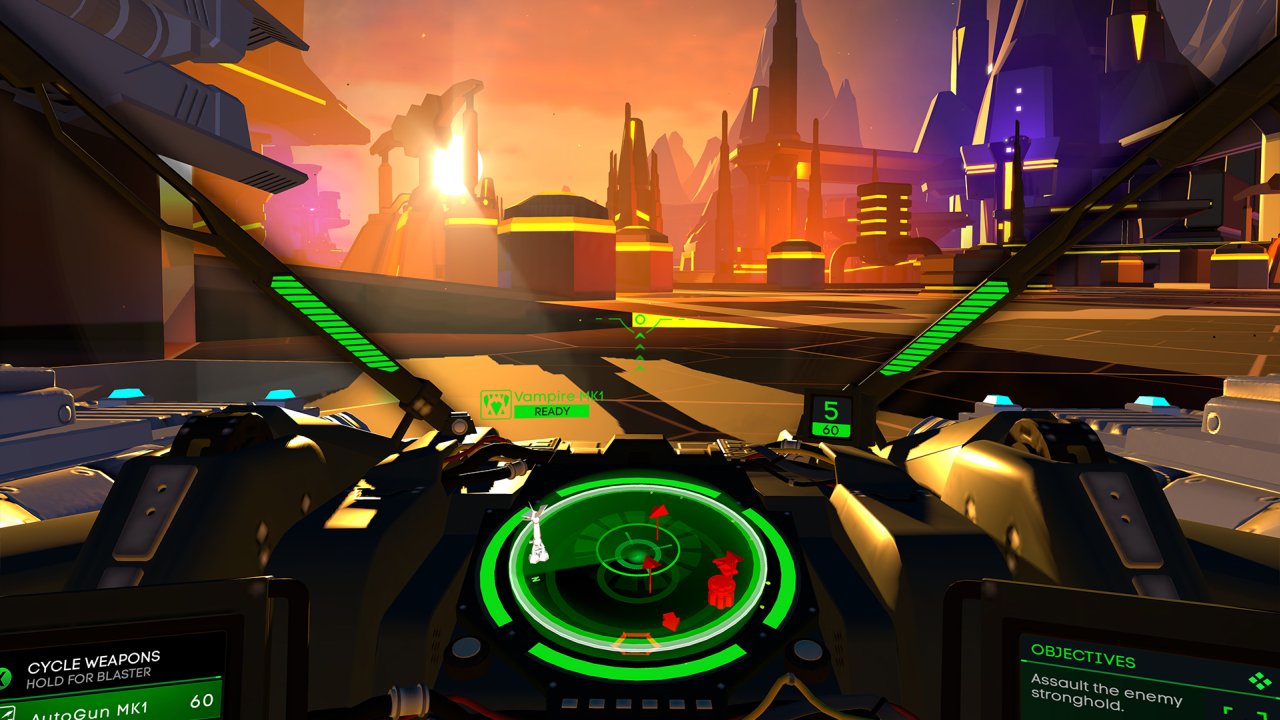 It makes sense to start with the discussion of the VR implementation. The entirety of Battlezone takes place from within the driver’s seat of a tank. It’s a pretty cool design choice, letting players navigate menus, pilot their tank and do all other menu items without ever leaving the cockpit. When you’re in menus, the windshield simply gets covered by a protective shield so you feel like you’re hulled down and safe from the outside world. It’s fairly immersive, and functional too – most of the important information elements are displayed on actual screens in your tank, rather than floating UI numbers. You can look around the seat and find options for additional menus like upgrades, objectives and so on. There are no issues with tracking your head movements.

Battlezone VR uses the fairly standard control scheme during the action. You’re piloting your tank with DS4 stick, and can look around using your headset. However, your view doesn’t make your tank turn like in other similar PS VR experiences; that must still be done with the stick as in non-VR games. This helps avoid any motion sickness issues. In fact, your view is really just that – you’re not even guiding your weapons reticule with it. Instead, that’s on the right stick, again more like a traditional action game. This means you’re really a pilot controlling a tank through the DS4, rather than your head movements. Sometimes this can be a bit confusing, especially if you’re used to shooting where you look as in other VR games – in Battlezone, you still have to find your reticule and aim manually.

Before joining a campaign, players get a choice of three standard tanks – light, heavy, and medium. They have self-explanatory stat differences (light tanks are faster with less health, heavy are the opposite). More tanks can be unlocked after you’ve beaten a campaign. Each of the tanks have two standard weapons and a special ability. The weapons are straightforward, mostly in the form of rockets (with and without lock-on), machine guns, and so on. All but your default weakest weapon have limited ammo. The special abilities operate on a cooldown timer between uses, and their effects range from temporarily disabling enemy tanks, or replenishing your ammo. There are many weapons and abilities to choose from as you go through a campaign. 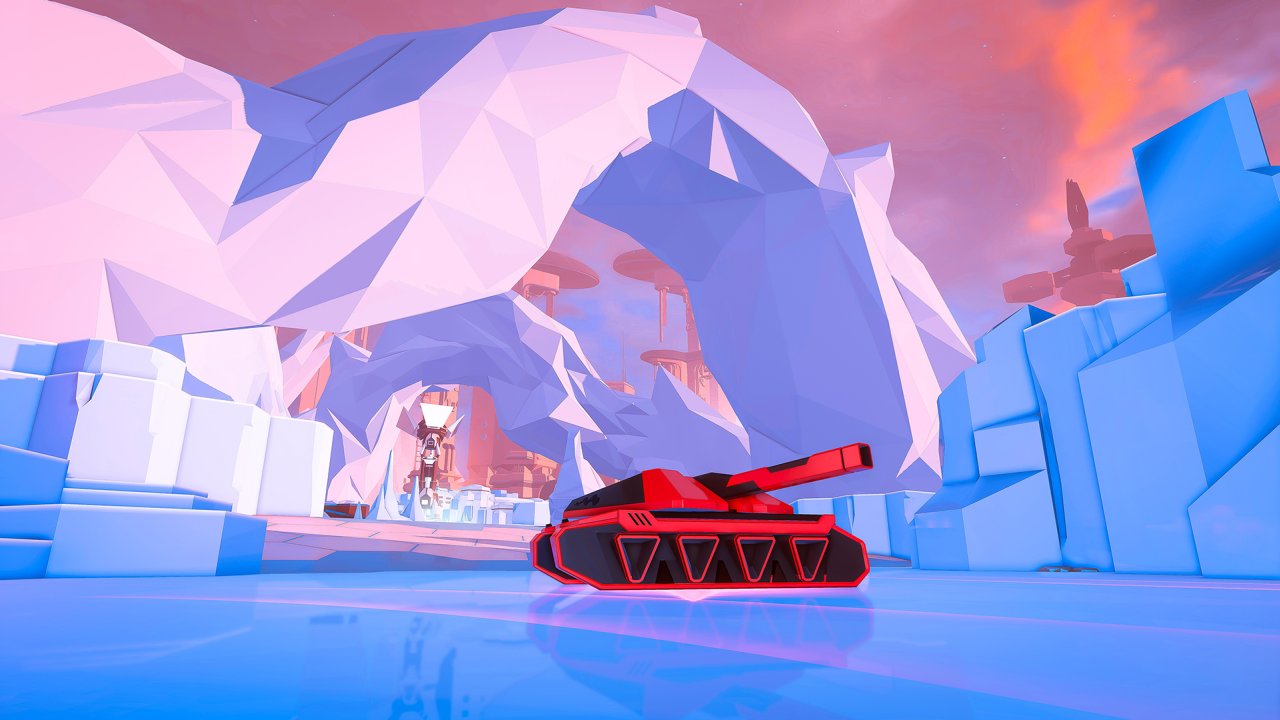 Actually controlling your tank is simple – as mentioned, you use the stick to drive around and a reticule that controls your aim and rotation. The game takes place in a wireframe, virtual-like world so the controls are far from realistic. The tanks glide and even slide a lot along the surfaces, and you can use a boost to escape a tough spot. On the other hand, most weapons suffer from imprecision and some physics issues, and take a while to switch between them, thus requiring skill and strategy to use effectively. Battlezone VR is definitely a game that needs some getting used to, and learning the behavior of different weapons is required so you can utilize them to the best of their potential. You’ll be battling a variety of foes across various similar-looking levels, from airships and UFOs to enemy tanks of all sizes. The AI is relatively simplistic, either shooting at you or another target, and driving back and forth randomly. To be fair, that’s what the players will be doing as well.

You may have noted, I have been using the word “a campaign” rather than “the campaign”. That’s because Battlezone VR doesn’t actually have a set story or path in a traditional sense, instead each campaign takes place on a randomly generated map. Each time you start a new campaign, you choose its difficulty and length (short-medium-long), and a flat map made of hexagons appears before you. Your goal (in a nod to the classic arcade game) is to make it to the other end of the map where a volcano awaits. To get there, you choose a path through the map, one hexagon move at a time, each representing a level. Players can drop nodes (which cost Data) to reveal the mission types on the hexes around the current location on the map.

The levels have a variety of objective-based missions, such as escorting/destroying a convoy, defending/attacking a base, or just surviving a few enemy waves. The mission types are often straightforward and are over relatively quickly depending on difficulty and number of players/their skill. While most of the missions are OK, there are special Shield Generator missions which are slogs through multiple enemy waves as you drive into the heart of an enemy base. These missions take a while and really break the pacing of the campaign – which spans at least around 20 missions even if you go straight for the end, and use the short option when generating the map. You can save your progress and carry on later, though. 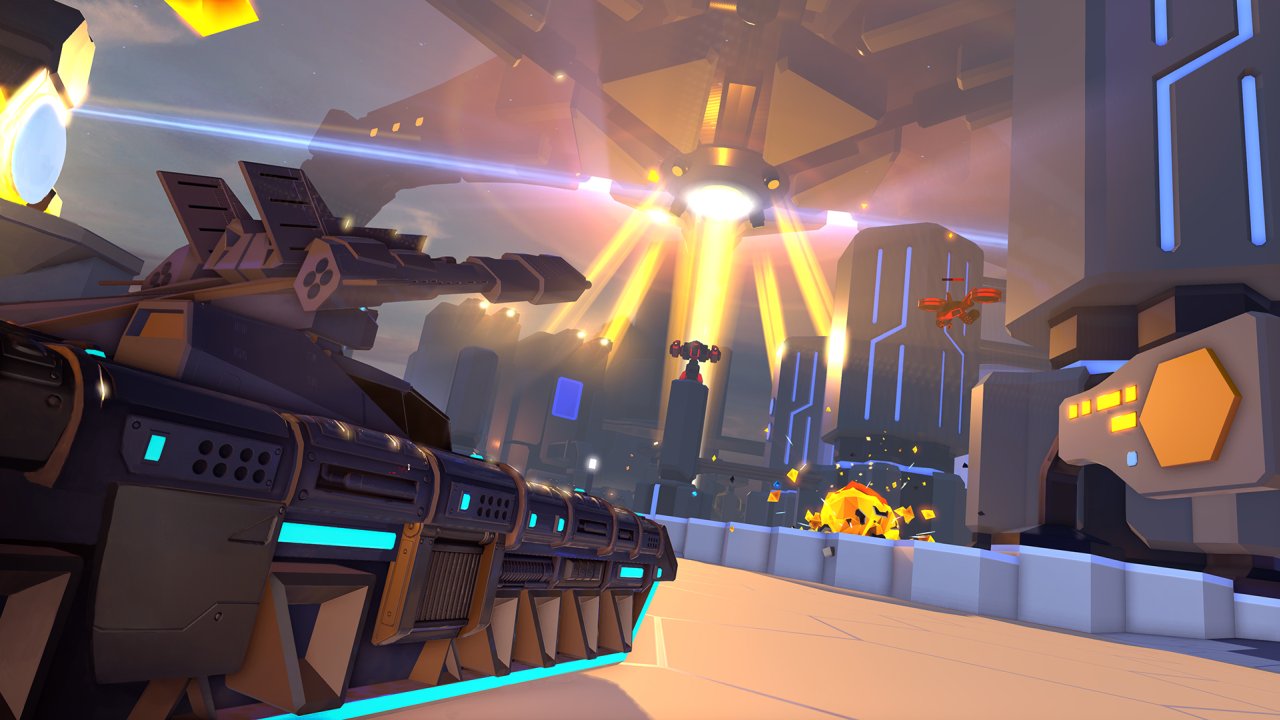 As you defeat foes and complete objectives you’re rewarded with Data, the game’s currency. With Data you can purchase upgrades and new weapons for your tank once you reach supply depot locations on the map, and also upgrade your tank. Your upgrade options include better shields on all sides, active reload (like Gears of War), and improved healing ability. To help you survive, players can heal each other and friendly structures/tanks when you are very close together. In tougher missions this results in interesting bunching up of the players, huddling to try and keep each other functioning. The game’s multiplayer does helpfully support drop in/out so you can join campaigns in progress with ease.

This healing method is quite important, because even playing through a short and easy campaign setting, the game quickly ramps up in difficulty. Playing with a full group of 4 is definitely a requirement if you want to have a chance at succeeding. As this is a roguelike, players only get a single life to use each, and once you’re dead, the campaign is over. Your Data, your tank upgrades, and weapons are all gone. Next time you begin anew, you literally start from scratch. This sort of punishing design, combined with relatively high difficulty, makes Battlezone VR an occasionally frustrating experience. Further, given how long the campaigns take, it can become a boring grind because the gameplay isn’t really that varied. You shoot things, try to huddle and survive, and move mission to mission, occasionally upgrading. Sure, if a player is taken out there is a brief window for the teammates to recover them by huddling together and healing, and players can spend Data to buy more lives, but it’s still a tough game. Similarly to SuperHyperCube, Battlezone VR feels too punishing and niche for a VR launch game that should be aimed at attracting an audience and establishing a foothold on the new platform for the publisher. But the devs seem to be aware of the issue, as a patch was recently released to adjust the difficulty on at least the easy setting.

The title also doesn’t look particularly impressive. The Tron-like wireframe visual design is fine, and technical visuals aren’t too bad for VR, but because so much of the action takes place decently far away as you shoot at distant targets, it can be too blurry. Trying to aim at a red object in the distance causes unnecessary eye strain as you’re fighting the physics of the ballistics to try and get a hit. The levels are supposedly randomly generated, but over a few hours of play there were many locations that looked pretty much the same structurally, and with only slight visual variations. Audio is similarly minimalistic, with the same techno beat playing through most of the game. 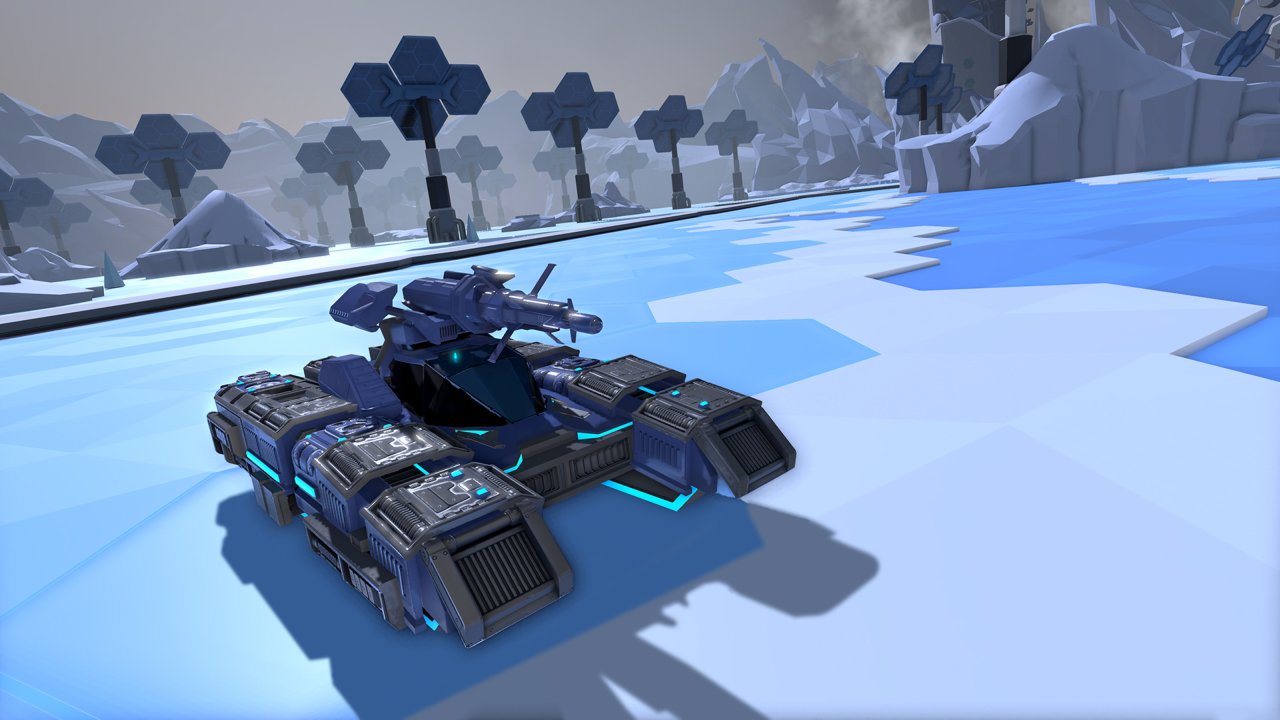 But let’s say that the idea of a roguelike does appeal to you as a player, in which case Battlezone VR may indeed find its audience on PS VR. But that audience is likely to be rather small, as reflected by less than 20 people playing in online campaigns. And even if you are a hardcore fan looking for a game like this, you’ll be disappointed to know that Battlezone VR is one of the most expensive PS VR launch games available. At a full price tag of $60 USD, it would be a very tough sell even compared to non-VR games; but considering the rest of the VR launch lineup, it’s double or triple the price of most titles. Will we ever see deep, complex games on PS VR that are well worth the same price as non-VR experiences? Probably. But Battlezone VR is not the game to justify that price point.

Our ratings for Battlezone on PlayStation 4 out of 100 (Ratings FAQ)
Presentation
60
Because you must often look in the distance, the PS VR's relatively low display resolution quickly becomes a hindrance. Minimal visual and audio design.
Gameplay
50
An often difficult and yet still occasionally boring/repetitive experience that will only mostly appeal to fans of roguelikes.
Single Player
55
Randomly generated campaigns means a unique experience each time, from scratch whether you like it or not. Some mission types drag on. Not much level design variety.
Multiplayer
65
Being able to jump in/out of games is good design, but there are few players online.
Performance
75
An immersive cockpit view of your tank that effectively displays menu functions. No issues with headset tracking.
Overall
60
Battlezone does an okay job of rebooting the original arcade game, but the end result of a randomly generated roguelike experience doesn't really satisfy. One of the most expensive PS VR launch titles, for no good reason. 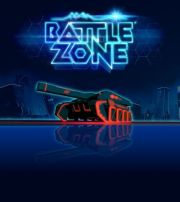 All videos for Battlezone (2)
Advertisement ▼