At the launch of a new gaming platform, you're probably going to see a lot of third party support as game developers and publishers are keen to showcase what their teams are capable of. But the console maker themselves also want to ensure that the launch lineup is strong, and so many internal studios work on projects that are aimed specifically at the new hardware. Such has also been the case with PlayStation VR, which has so far received good support from third and first party studios. But one game has been highlighted by Sony themselves, named PlayStation VR Worlds. This is the title that's meant to be an example of what the new virtual reality headset is capable of, and so it is even included with your purchase of the PS VR Launch Bundle (that also contains the PS Move and PS Camera). And while PlayStation VR Worlds offers a decent introduction to VR, it's not exactly top-tier. 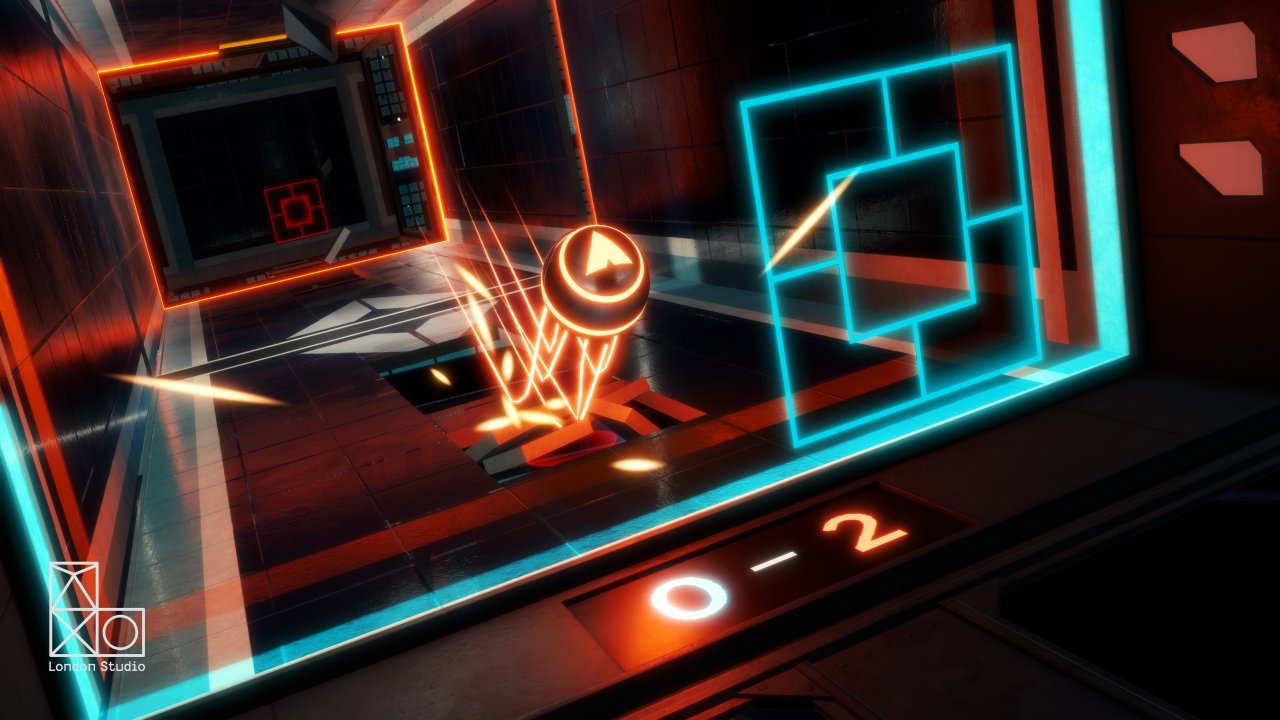 PlayStation VR Worlds actually contains five separate experiences, which you can access from a simple menu hub. The best of the bunch has to be Danger Ball, an entertaining and well-made virtual sports game that plays like Pong on steroids. Positioned in a virtual arena, you're facing down a small corridor and you have a reticule/paddle that's positioned in the center of your view. Moving your gaze in any direction along a 2D surface also moves the paddle. At the other end of the corridor is your opponent's paddle; a ball is introduced and the match begins. Your goal is to simply reflect the ball and try to score on your opponent. Each round lasts until a player scores 5 goals.

Unlike Headmaster for example, Danger Ball works well in VR because you're only moving your view along a 2D plane, and not actually moving your head a whole lot. You're also reflecting the ball with a paddle rather than your virtual head position, which provides a much easier perspective to use. The speed of the ball picks up fast, and you'll need some good reaction times to make deflections. Aside from simply reflecting the ball, you can also nod your head to do a powerful shot, or snap your view slightly to put a spin on the ball. You'll encounter a variety of opponents in the game's Tournament and Quickplay modes (there is also a Score Attack mode); these opponents feature a single unique ability. One can sometimes duplicate the ball upon reflection, forcing you to scramble and reflect both; another can hold onto the ball and release it at a random moment, or put a crazy spin on it. The variety of AI opponents helps the game's lack of multiplayer. While it's entertaining, on higher difficulties it becomes very tough to keep track of the fast moving ball, especially because the hallway you're playing in actually gets destroyed by the ball as it touches the walls and floor. The debris coming off, combined with other visual effects, makes an already fast ball even more difficult to see. Still, Danger Ball is a fun and varied virtual sport for quick sessions. 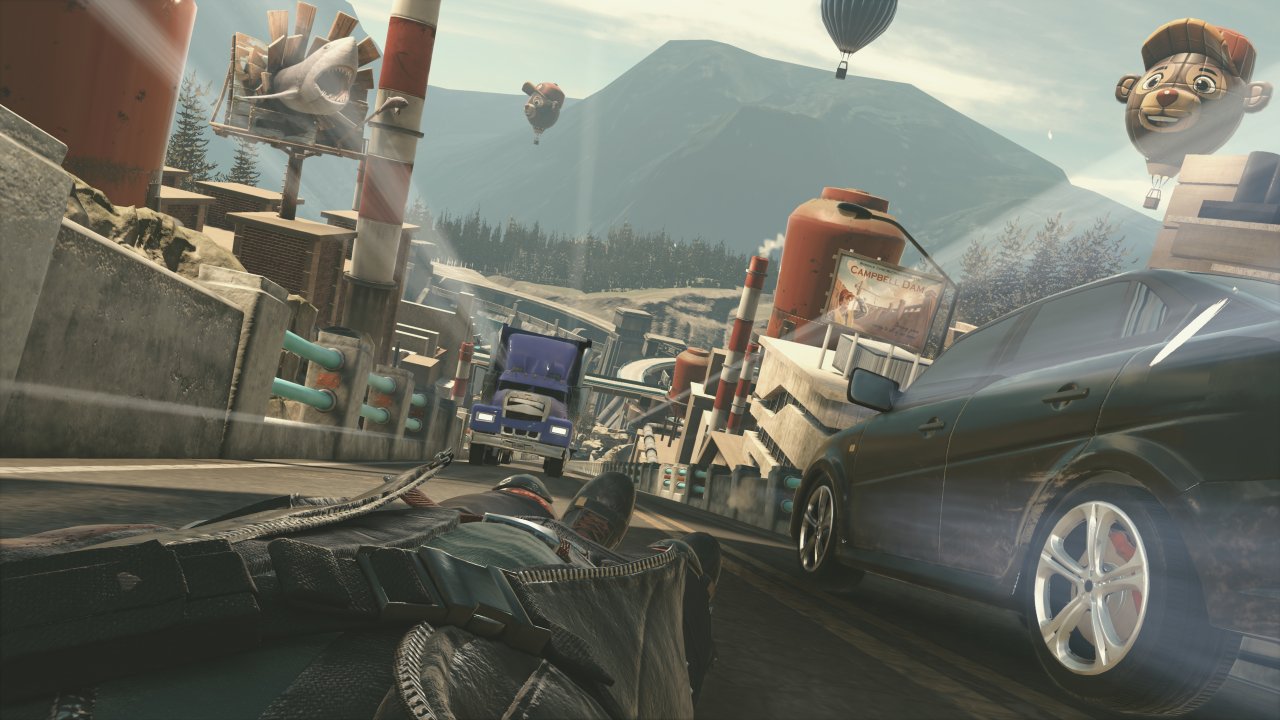 The next game in PlayStation VR Worlds is a cinematic adventure experience called London Heist. This rather brief story places you in the shoes of a man that steals an expensive diamond from a crime boss, and the events that follow. Through a series of scenes where you're stationary, players can explore the items located directly within their reach. Most of the environments have very few items to interact with however, and instead just play out as cutscenes. These moments can be boring, as there is nothing for the players to do while characters give overlong speeches. When the action picks up, such as a shootout in a mansion or on the highway, players use PS Move controllers to aim and shoot with one hand, and to reload you need to grab an ammo clip with your spare hand and bring it to the bottom of the gun similar to reality. Shooting itself is satisfying enough but not overly precise.

London Heist is also the only game in the pack that recommends the use of PS Move controllers - but be sure to have them on your hands before you start, because the main menu doesn't actually visualize these controllers, and it can be confusing trying to navigate and start the experience. Using PS Move in London Heist is okay, as they become your virtual hands, though there is some glitchiness and tracking issues, especially when you have the controllers near your head. The virtual reality design is rather basic, with most of the action taking place more or less in front of you; rarely is there a reason to look far to the sides, or behind you. Despite the game recommending PS Move, London Heist is playable just fine with a regular controller. After you're done with the short story, you can visit a series of shooting ranges to practice your aim and set some scores for the leaderboards. London Heist is a brief and straightforward narrative-driven VR experience that seems OK for newcomers, but there are better choices for this sort of experience in the PS VR launch lineup. 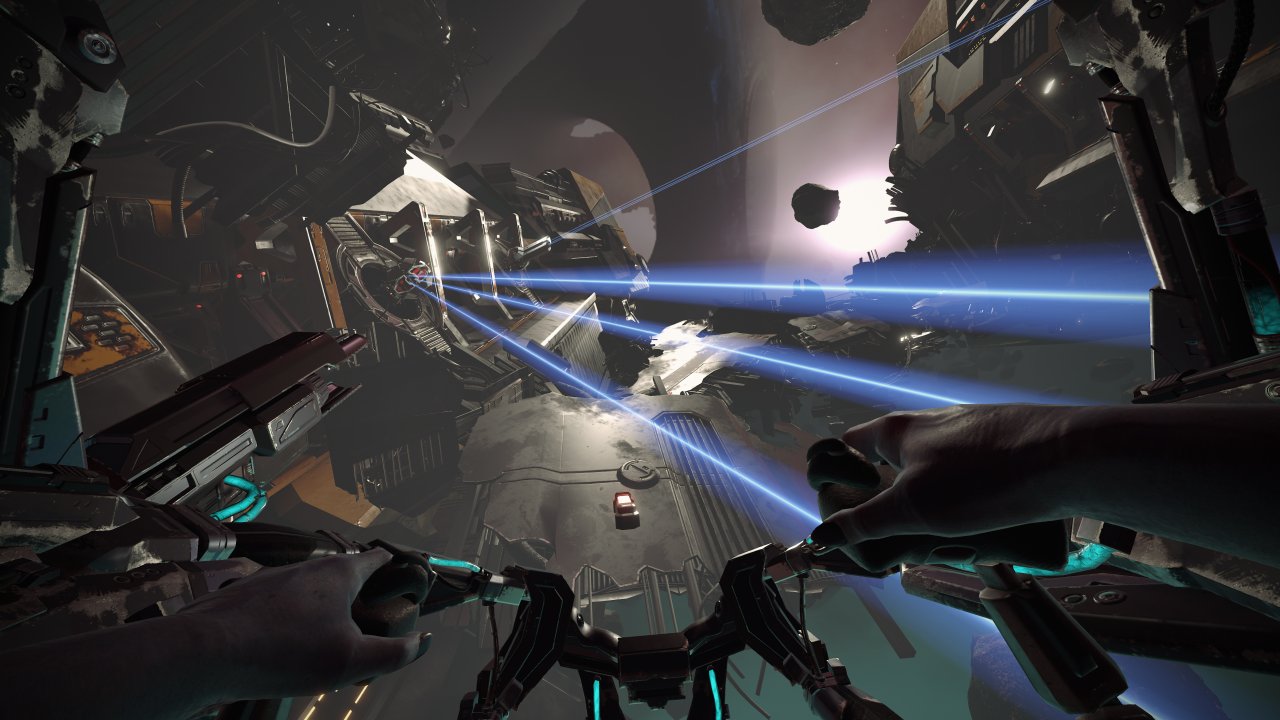 The third experience in PlayStation VR Worlds is the most feature-complete of the bunch and feels like a proper game that you might see on a non-VR release, titled Scavenger’s Odyssey. Players assume the role of an alien who is operating a scavenging vehicle in space. You and your virtual AI supervisor are sent to retrieve an artifact on a planet, but things go wrong quickly. You nearly crash land on the planet, and begin to make your way to the artifact through a series of floating debris and a large abandoned ship. The Scavenger’s Odyssey campaign is straightforward and about an hour long. You'll traverse through various space environments, mostly floating debris, underground caves and a crashed vessel. The control layout is fairly standard - you use the PS VR to control your aim by looking up/down, or left/right which also rotates your vessel; the left stick also lets you move in any direction and the right stick rotates your view horizontally. You'll encounter two enemy types - a large swarm of green bugs that damage you if they get close, and larger aliens that spit acid. You only have a single weapon type that can overheat if you fire for too long, as well as the ability to grab loose objects in the game world with a beam and fling them at the enemy. Lastly, you can jump between surfaces (no matter their orientation) by quickly choosing a landing spot.

While the Scavenger’s Odyssey is a decent enough experience, with basic gameplay and a cryptic story, its real purpose seems to be a test of how well you can handle VR. Given the control scheme (letting you move around, and move your view at the same time), and the many sideways and upside-down jumps and environments, this is a real test. If you can complete Scavenger’s Odyssey without feeling sick, you're probably safe for absolutely anything else that PS VR may throw at you. Despite having no issues in majority of the VR games, Scavenger’s Odyssey gave me a feeling of discomfort that grew very rapidly as the campaign progressed. You've been warned. 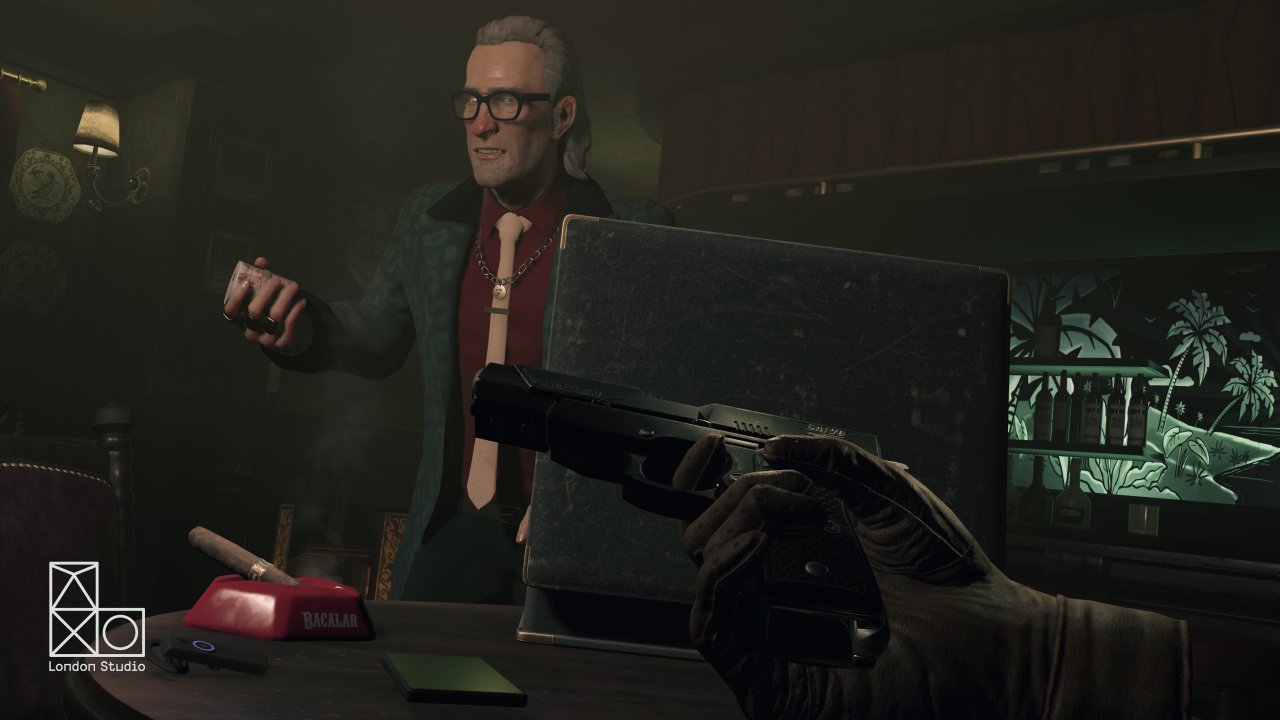 The last two games in PlayStation VR Worlds feature the least amount of player input. In VR Luge, you're on a luge, speeding down a series of roads that have tons of hazards and vehicles. You can see your virtual body in front of you, and you steer by tilting your head side to side. It's fast paced and can be exhilarating, though this game also demonstrated some VR tracking issues that resulted in crashes. Crashing isn't a big deal as the game will still allow you to continue, or bounce off the edges of the road. Playing by tilting your head to the sides also takes some getting used to, and never feels precise enough to maneuver yourself through the high speed tracks. You can choose to play through a series of tracks or pick them individually; there are also leaderboards. Given the fast paced nature of the game and twisting track design, motion sickness could be an issue here as well.

The final game is Ocean Descent, with three demos on offer and no controllers required. Two of them let you peacefully assume the role of a deep diver, as you're standing in a cage and are lowered deeper underwater. With VR you can look all around you, though it's clear that most of the work has been done in front of the cage, as looking behind only reveals the dark sea. The two peaceful experiences simply let you observe the underwater life for a few minutes, while the third demo called Shark Encounter tries to be a little more intense. Accompanied by little bits of voice acting to create a short story, you're lowered deep under in order to retrieve something that your team has picked up on the radar. Little did they know there is a large and aggressive shark down there, which proceeds to attack your cage and may cause a few moments of panic for gamers who get immersed in the demo. Ocean Descent is a nice introduction to the very basics of VR that anyone can enjoy.

If you're going to try out PlayStation VR Worlds, it's definitely a good idea to do this early in your virtual reality career. The games included in this package represent a taste of what VR is capable of, and while they are decent, there are better titles in the PS VR launch lineup that do the same thing. If each game was sold separately, I'd only really recommend Danger Ball. Maybe Scavenger’s Odyssey too, if only to test how much VR you can really handle. Ocean Descent is too passive and has no replay value, VR Luge is not that enjoyable, and London Heist is not as good as Batman: Arkham VR. PlayStation VR Worlds is a decent collection of games to try out if you have the Launch Bundle, but it’s is probably not worth the full price purchase.

Our ratings for PlayStation VR Worlds on PlayStation 4 out of 100 (Ratings FAQ)
Presentation
68
All of the games look fairly decent for PS VR, with good audio design.
Gameplay
50
Some very basic gameplay across most of the experiences. Danger Ball is the most fun, while Scavenger’s Odyssey is the most involving (if you can stomach it).
Single Player
50
Most of the experiences are either brief, have little depth, or both.
Multiplayer
NR
None
Performance
65
Occasional VR (Luge) and PS Move (London Heist) tracking issues.
Overall
58
The collection of games in PlayStation VR Worlds will satisfy, if itls your very first PS VR experience, but you'll soon realize that there are already better alternatives out there. 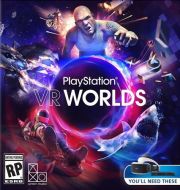