The introduction of a new gameplay device, in our case the PlayStation VR, sometimes brings with it a variety of smaller experiences that focus on a single idea or mechanic. That’s exactly the case with Headmaster, a game where players assume the role of a man on the soccer pitch, trying to head soccer balls into the net. It’s certainly the most involving PS VR launch game as far as the actual movement is concerned, but that also means there are additional problems that get in the way of this seemingly simple concept. 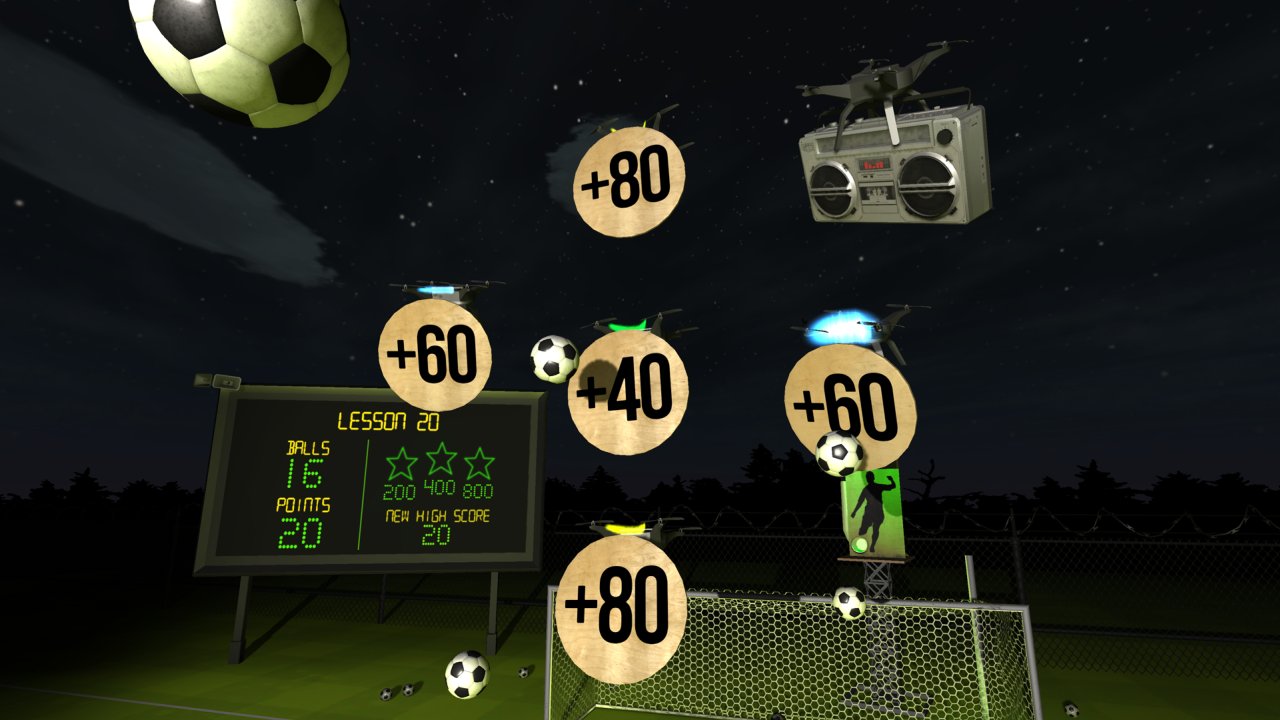 Before we get to the gameplay, it’s worthwhile to touch on the game’s setting. This isn’t a simple arcade title that just lets players practice their virtual headers in a generic soccer field. There’s actually an atmosphere and some story elements to consider. You are a member of the Football Improvement Centre, which looks very much like a prison, even though you’re told it is definitely not a prison. In this Improvement Center, you are just a number and have no actual name, trying to work through the program as part of your “re-education”. The game is absolutely filled with this type of dry deadpan humor, treating you as a member of the exclusive program and giving you “motivational prizes” when appropriate. It can be favorably compared to the likes of Portal.

The game’s career is decently lengthy and takes place over a series of exercises—challenges of sorts—where you’re tasked with earning a minimum amount of points. The more points you earn by knocking balls into the net, but more importantly hitting specific targets, the more stars you could earn. There are up to three gold stars per level, and earning enough unlocks an exam course which you must pass to move on to the next set of exercises. It’s straightforward, and the game keeps things interesting by occasionally interrupting your pre-recorded instructor with some live behind the scenes story bits. If you have company over, there is also local multiplayer option where you can take turns with the PS VR headset to compete for a high score. There is only one level currently, but more are promised in the future.

A lot of credit must also be given to level design in the campaign, as you’re not just trying to hit a few targets with a ball. The game gets progressively more whacky and constantly changes things up – you will need to hit targets to the side of the goal, or behind obstacles, or move a forklift out of the way first, and so on. There's beach balls, explosive balls, coming in from all sorts of directions, and so on. The variety and complexity of your targets consistently morphs and keeps the game feeling fresh with each level. 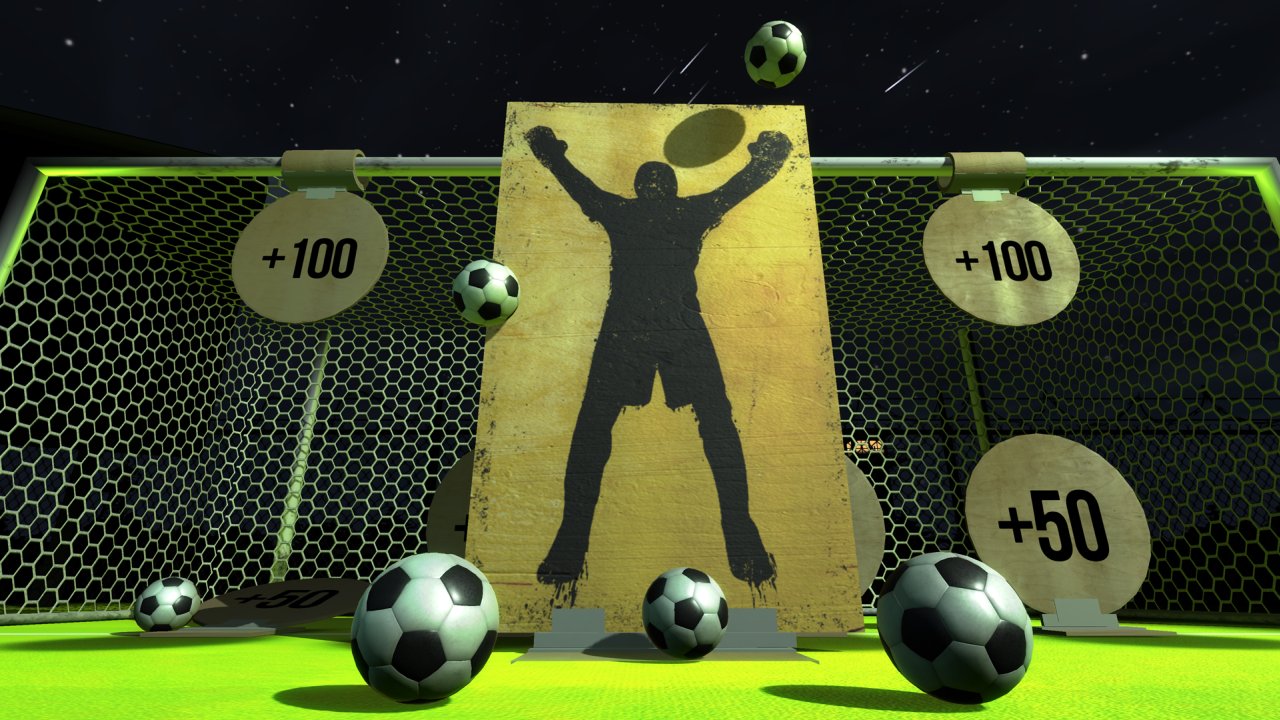 As mentioned, Headmaster is a game that uses the PS VR headset the most actively of all the launch titles. Heading balls into the net and into the targets is both easy and intuitive… when it works. Unfortunately because of how much motion and potential nuance is required (hitting high vs low targets, changing direction of the ball), the PS VR tracking often failed. Regardless of my efforts, the way that the balls bounced off of my virtual head were largely inconsistent. I tried various techniques – swinging by body a whole bunch as instructed by the game, or only barely nodding my head – but the resulting header never really went where I wanted it to. It’s frustrating because when it works, it feels fantastic and as someone who plays soccer in real life it’s an immense feeling. But I found more often than not that the game/headset didn’t really translate my movements onto the virtual field. The ball physics may have something to do with it, as I observed some very awkward behavior. Some of my shots actually bounced straight up and slowly fell, even though I made large body movements; other times when I barely nodded, I saw my shot catapult across the field as if it was kicked instead of headed.

All of this head movement also certainly has an adverse effect on the positional tracking. The camera was clearly struggling to keep up at times, often re-adjusting my view and snapping between points of reference, which was quite nauseating. Even if you started off fine, the excessive head movement would eventually lead to sync issues. It brought up bad memories of Xbox 360 Kinect and Wii sports games where your limb movements wouldn’t get tracked properly half the time. When you’re not on the field and instead taking a rest in your room (totally not a prison cell), the tracking seems fine and you can look around the small area, and interacting with menu items is straightforward and done by simply looking at the options you want to choose. The game looks decent as well, with bright colors and a fitting art style for the setting. Though the game takes place at night and you won’t see anything beyond your immediately lit portion of the soccer field, there are outlines of buildings and trees that make the environment feel complete. 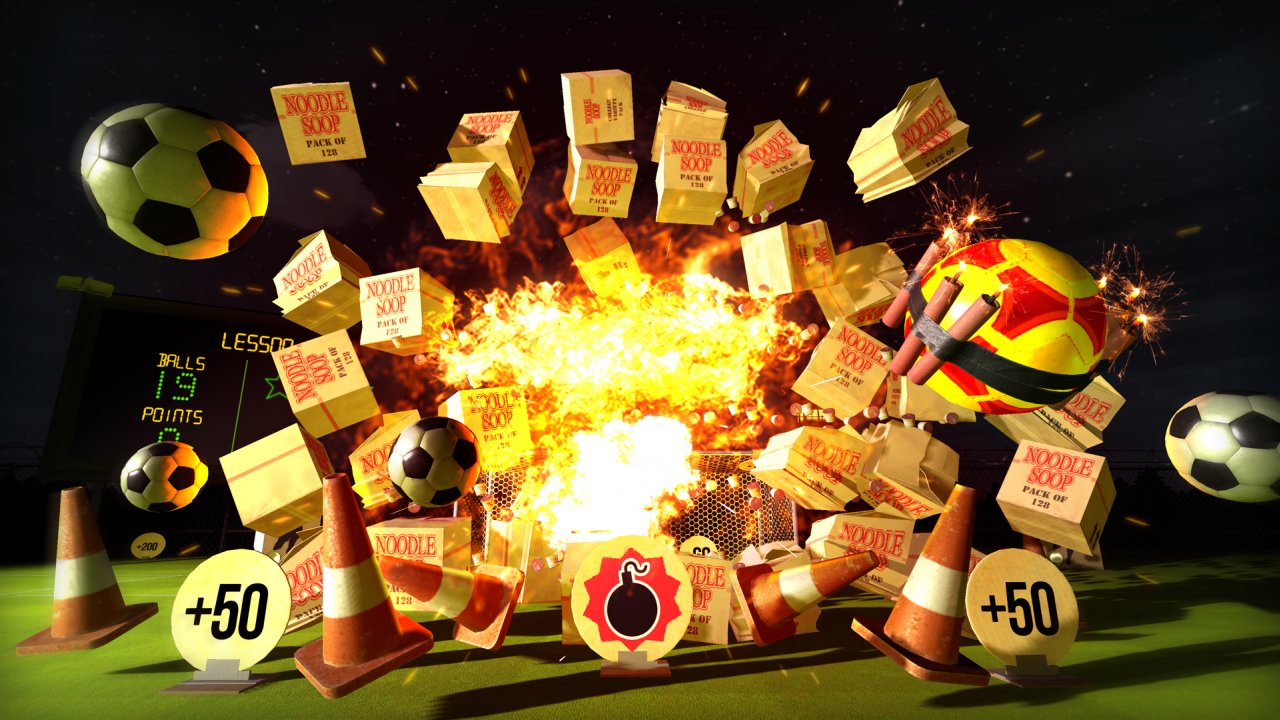 Headmaster takes a fairly simple concept and turns it into a rather worthwhile game. There’s a surprisingly interesting setting and funny story bits, creative level design, and plenty of potential. Unfortunately, the game is undone by its own core mechanics, as there are too many tracking problems and physics inconsistencies for it to be constantly entertaining. With so much head movement, the PS VR is often unable to keep up, and the moments when the tracking does work and you nail a sweet header into the top corner are few and far between. It’s an okay looking PS VR game that is even a little immersive during moments of downtime, but in its entirety there’s just a few too many caveats to recommend it.

Our ratings for Headmaster on PlayStation 4 out of 100 (Ratings FAQ)
Presentation
78
The unique setting is well executed with humorous narration and decent quality visuals.
Gameplay
50
Simple mechanics that are immersive when they work, and frustrating when they don’t. Constantly throwing your head around with a VR headset on is not exactly comfortable.
Single Player
75
You’d think with a single mechanic, there’s not that much that can be done. And yet the game keeps throwing fun and diverse scenarios to keep the players going.
Multiplayer
60
Just a single level that friends can take turns with.
Performance
50
The tracking of your movements is the game's main selling feature, and yet its biggest downfall
Overall
61
Headmaster is a surprisingly entertaining and the levels are well-designed, but it’s unfortunately let down by the core gameplay mechanic. 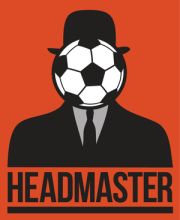 All videos for Headmaster (1)
Advertisement ▼