Imagine you are required to draw a straight line between two dots on a sheet of paper. It sounds easy, but a small tear separates them, making it impossible. What if there was another way? We could bend the paper and join the opposite edges. Now the line can travel a different route across the edges, connecting the points. Add three more sheets of paper to the equation, and place a bunch more dots that serve as links between each sheet. All you need to do is draw lines and connect the dots. At its core, this is how Obduction functions. Replace the sheets of paper with beautiful alien worlds. Swap the dots with ‘seeds’ that transport players between these worlds. And exchange the straight lines with, well, you.

Obduction is the product of Cyan Inc., best known for their Myst and Riven games. Myst was an incredibly successful adventure game; it released in 1993 and remained the best selling PC game until The Sims came out 9 years later. These adventure games appealed largely because of their presentation qualities. They took players to strange worlds so they could pull levers and push switches. At the time of Myst’s release, no PC was powerful enough to render decent looking environments in real-time, so Cyan pre-rendered discrete points in the world. We’ve long since had the computing power to do such an adventure game in real-time, and with the help of some crowd-funding Cyan has made Obduction a revelatory visual experience that contains some clever puzzles. 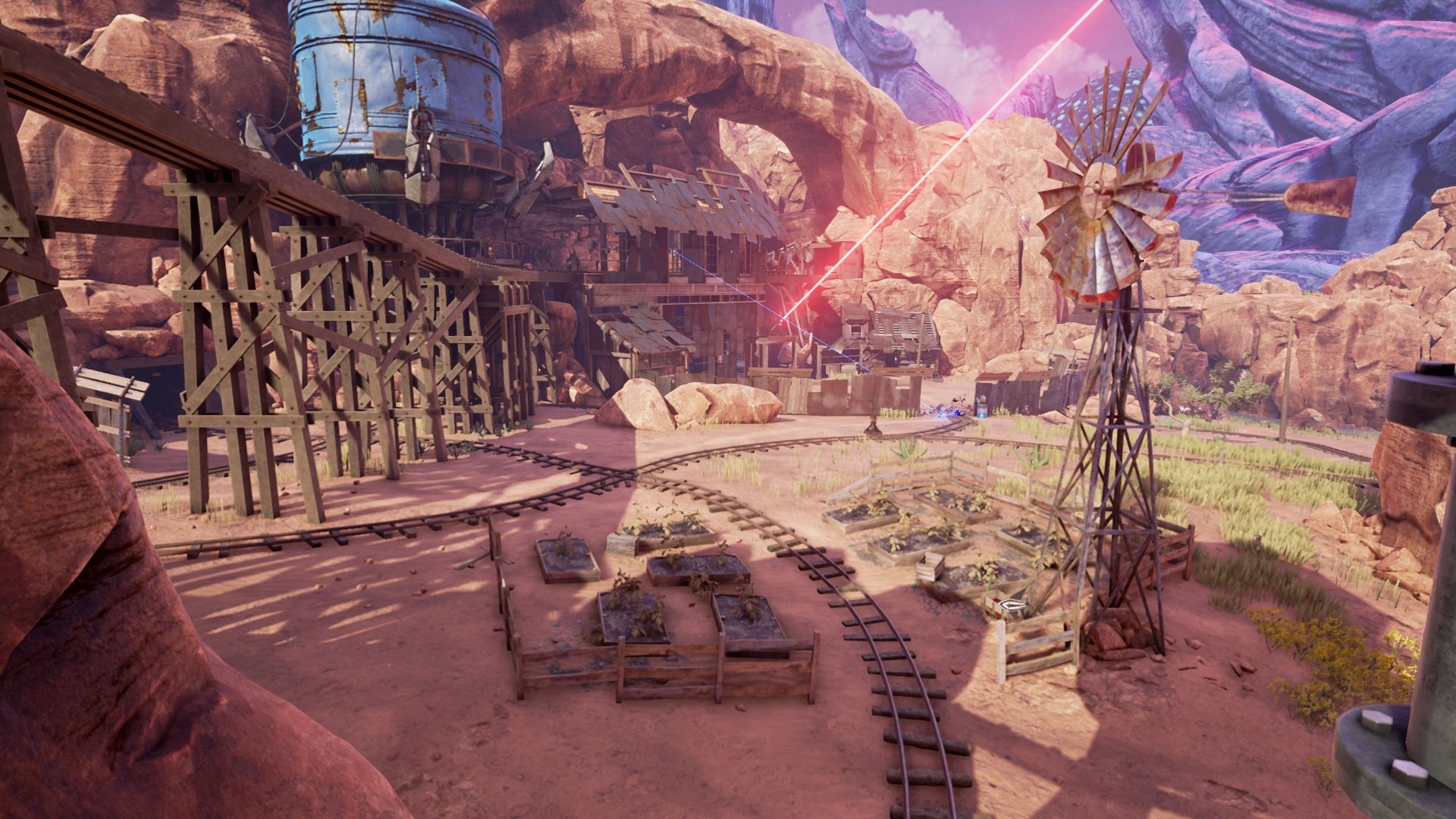 The first world in Obduction is the most Earth-like

Obduction starts in rather cryptic fashion. Players are drawn towards a flying magical ‘seed’ that eventually transports them to another place. You will find yourself in a mining town that resembles something from the Wild West. This is not the whole town, just a large spherical part that was transported to an alien world that can be seen outside the sphere. The town is empty now, but others were previously here; they were brought from different places and different times along with other slices of geometry. Most of the sphere was once a part of Earth and, as the first world you explore, it is a good starting point for the adventure.

There are a range of puzzles in Obduction that generally involve a satisfying mechanical function. In the Wild West section, players need to pull levers to switch mine-cart tracks so they can travel to parts of the world. Elsewhere there are keypads that can open doors, assuming the code has been acquired. The mechanical functions are generally easy to understand despite featuring diverse technology. Interacting with objects usually has practical and immediate results, so using them can be fun and expose solutions. Only a few of the devices are obscure enough to be easily missed from a casual glance.

After stumbling through part of the first world, and getting the lay of the land thanks to holographic displays that use nostalgic full-motion video, you will find yourself near a sealed door. Inside is an eccentric character that needs you to power a battery and destroy an energy barrier. Destroying the barrier will allow movement from one edge of the sphere to its opposite side, just like lines on a curved sheet of paper. This traversal method becomes a major part of the game. As for the powered battery, that is a little more abstract, but it involves the interconnected worlds. 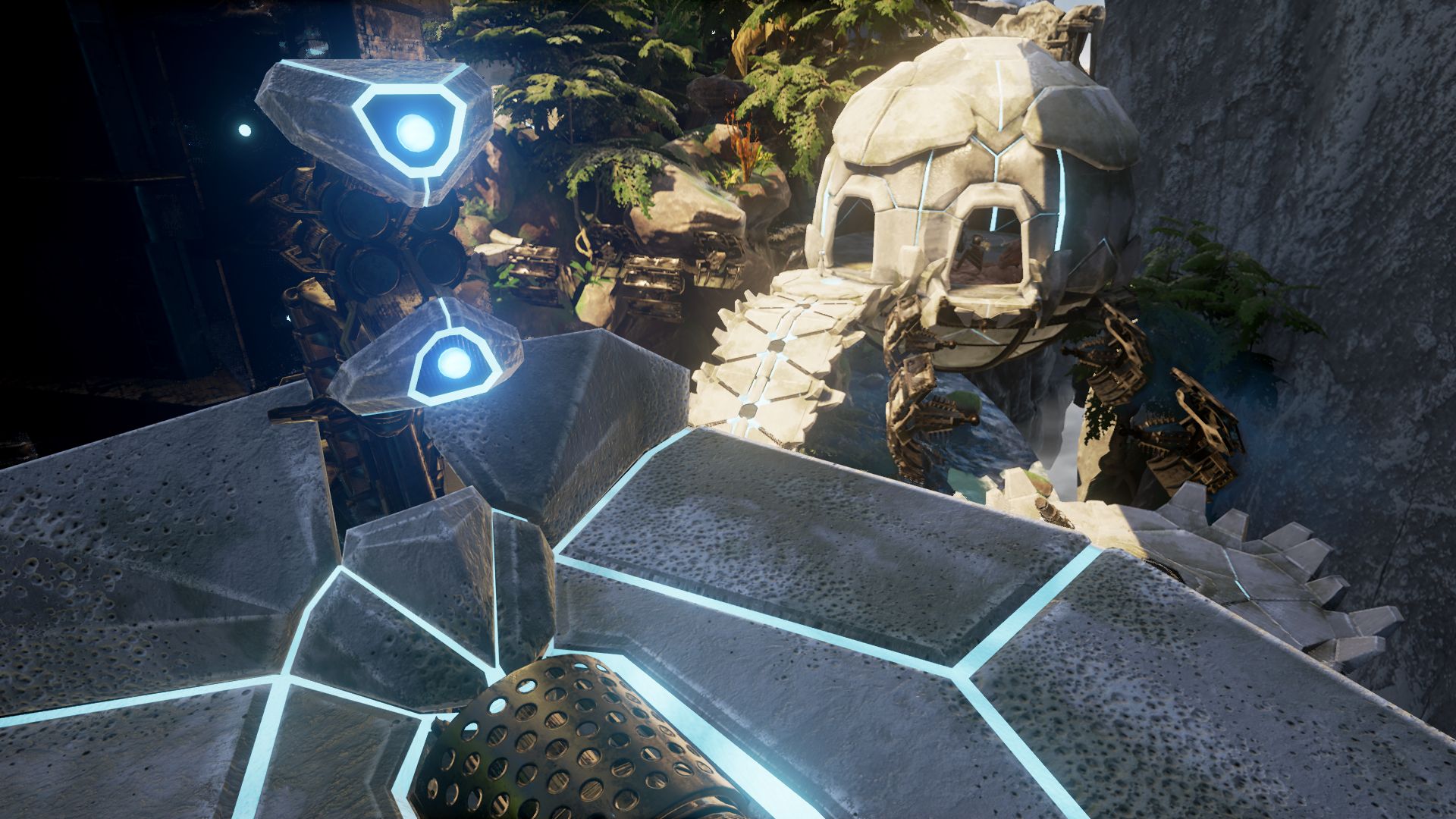 Buttons for elevators, and other things, are everywhere

Just like the seed that started the journey, additional seeds will transport you—and a small chunk of world—to another alien landscape. These football-sized seeds are usually attached to a mechanical switch that begins the transport process; players are treated to a glorious particle effect that soothes the 10-20 second load times. Seeds allow players to utilize other worlds to overcome impediments. It can be as simple as exchanging seeds to create a bridge to another location. Or it might involve rotating a seed (and part of the world) to access an unseen area. Alignment and placement of seeds is vital, although some are merely used for travel between worlds.

Using seeds is incredibly rewarding, as worlds are repaired by their corresponding pieces found in sister worlds. Even better is when you exchange seeds and return via another route, creating healthy anticipation that builds on the walk back. In a later world, more powerful seeds encapsulate smaller ones, requiring some dancing back and forth to get the interlocked combination right. Although there is much travel, there are an efficient number of seeds, so they remain manageable despite connecting multiple worlds.

The four worlds in Obduction look glorious even if players only spend ample time in three of them. These large world spaces have awe-inspiring views that will tempt players to stop and stare. Just exploring the worlds is exciting and trying to access all corners is a general task while you solve more immediate puzzles. These worlds are also foreign, either because of the technology or its alien designs. Suitable musical scores compliment the landscapes. It is refreshing to play an adventure game that seeks to reward players so vigorously with the world around them. 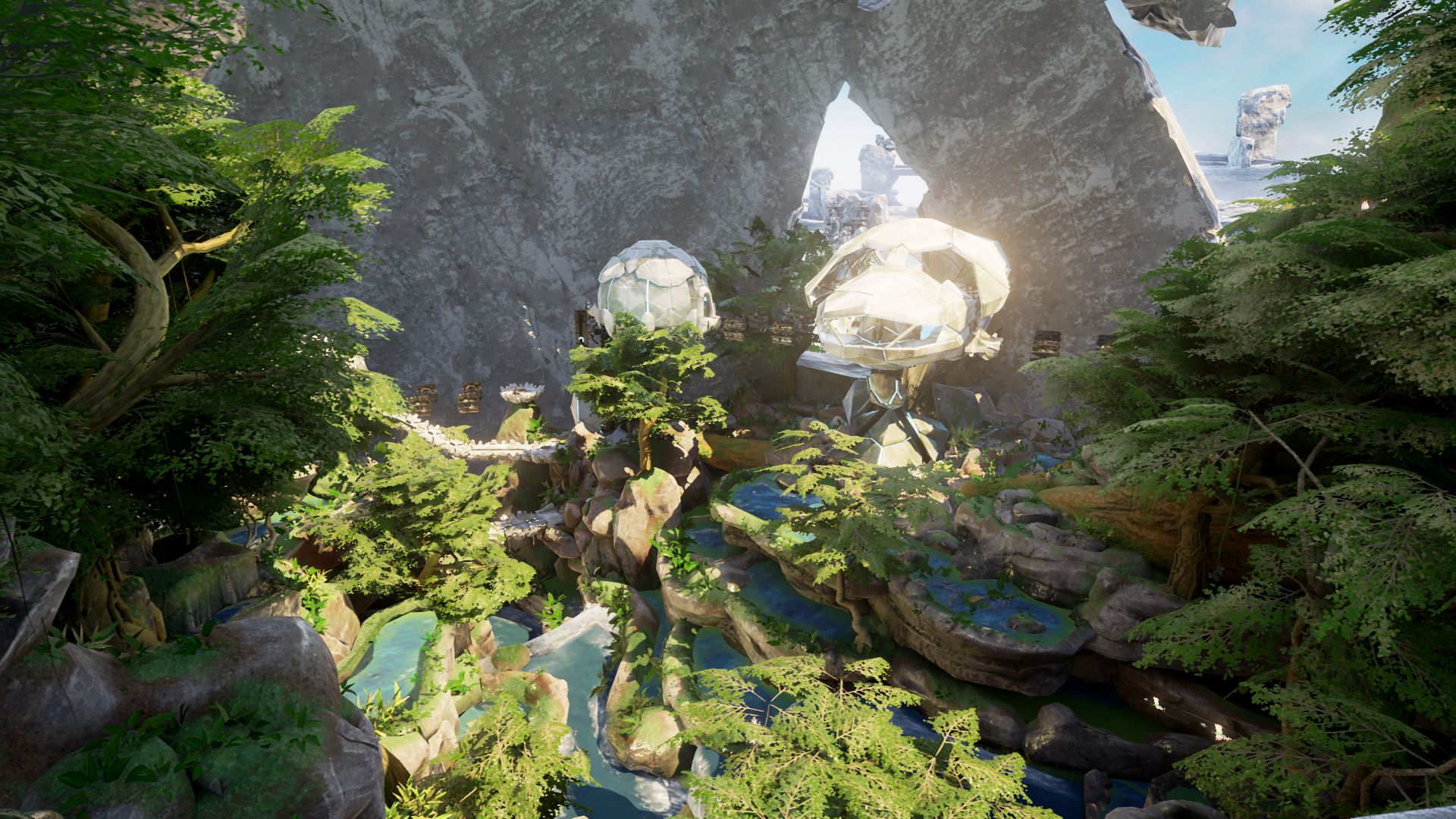 Time to enjoy the view

Obduction requires a lot of walking. Tracking pathways through seeds and sphere edges is mentally exhaustive, so the route chosen may take longer than optimal simply because it was easier to remember. Don’t be surprised if you get to where you are going and realise there was a faster way. Trying to brute force solutions will result in even more travel as the seeds get jumbled. The walking does provide natural time for thinking, but much of it is required. The good news is that running is possible; the bad news is that running is awfully slow. Running diagonally is faster than straight ahead, so you can at least shave seconds regular travel routes and collide into walls more often.

This excess walking probably could have been alleviated if the worlds were condensed. While the first world is nearly perfectly structured, the other two main worlds are a little sparse with their puzzles and interactive elements. The designs are also deceptive when it comes to navigation, as some paths are too indirect and the scale is initially overwhelming. Even the cryptic story gets little attention beyond the first world which does not help matters. The fourth planetary biome is more of a visual showcase, although minimal time is spent exploring its barren surface. While the worlds are generally well designed, their visual awe does not always match their content distribution.

Obduction’s worlds look great on Unreal Engine 4, but they are not without problems. Some of the environments are quite taxing on the framerate, with the lacklustre finale dropping below 20 FPS despite good performance in most other areas. There were some stutters too, more common when running. Load times were a bit erratic, and sometimes the game would literally freeze the player just to load an upcoming area. There was one game-breaking bug—a seed-swap went horribly wrong, causing them to overlap; reloading the game unfortunately put one seed in an impossible orientation. Cyan’s support team fixed the problem, eventually, and there were no additional major issues. Minor problems persisted though, including fiddly interaction with strange liquid panels and clumsy operation of a few mechanical objects. Should you get the chance to explore Obduction, regularly copying save files may prevent losing hours of progress. 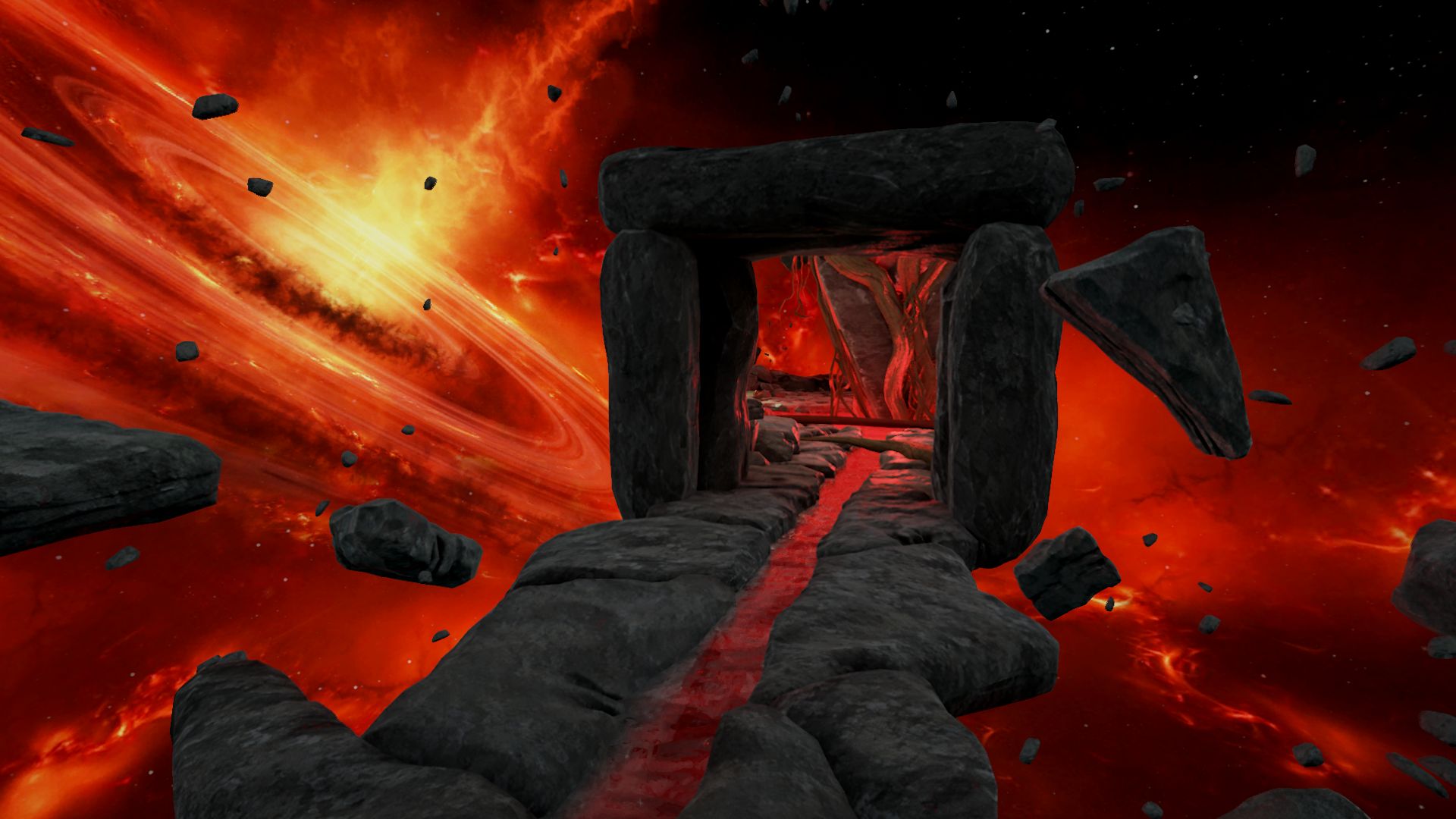 The worlds are linked in strange ways

Adventure fans should be satisfied with Obduction because it employs a clever world-jumping device across four captivating worlds. Tracking pathways through the game spaces is crucial and part of the challenge. Mechanical devices are used liberally, and are required to solve the smaller puzzles. Players will be treated to some wondrous vistas across the four worlds and are gradually rewarded as routes are exposed. Aside from a few obscure solutions, the logical flow of puzzles can be appreciated. The worlds could have used space a little better to minimize the weariness from walking, but it is hardly of great concern. Players will experience a splendid adventure with Obduction, through worlds that are as challenging as they are beautiful, so start drawing those lines and connecting the dots.

Our ratings for Obduction on PC out of 100 (Ratings FAQ)
Presentation
85
Unreal Engine 4 shines with awesome particle effects and great natural environments.
Gameplay
80
Gameplay is split between mechanical devices, sphere travel and transport via seeds. It can be hard to keep track of everything although most is quite logical and very rewarding.
Single Player
68
Events are largely cryptic, and story elements are minimal in the second half. The finale is underwhelming.
Multiplayer
NR
None
Performance
(Show PC Specs)
CPU: Intel i5 3570k
GPU: XFX RX 480 GTR Black 8GB
RAM: 16GB DDR3
OS: Windows 10 Pro 64-bit

68
Performance not always consistent but generally adequate. Load times are erratic and can interrupt travel. Some bugs, including one game-breaker, so manually back up saves.
Overall
76
Players seeking an adventure through fantastical worlds, with a slew of mechanical and spatial puzzles, will discover that Obduction is a gold mine. 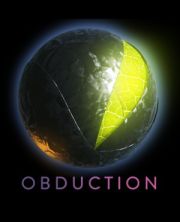