The invertebrate massacre continues, and it's still a lot of fun

While it’s common to observe people complaining about major publishers releasing too many games within a popular IP or series, you rarely hear anyone object to the fact that Team17 have been quietly releasing Worms games since the mid 90’s. Believe it or not, Worms W.M.D is the twenty-third entry in the series if you include mobile games. Almost equally astonishing is how much the new entries resemble the classics from the 90’s. The core gameplay that made older hits such Armageddon such a success is absolutely intact. It’s a great core gameplay loop to be sure, and W.M.D makes some meaningful additions in the way of vehicles, crafting and enterable buildings. The question remains, does this iteration do enough to differentiate it from past games to warrant the thirty dollar price tag? 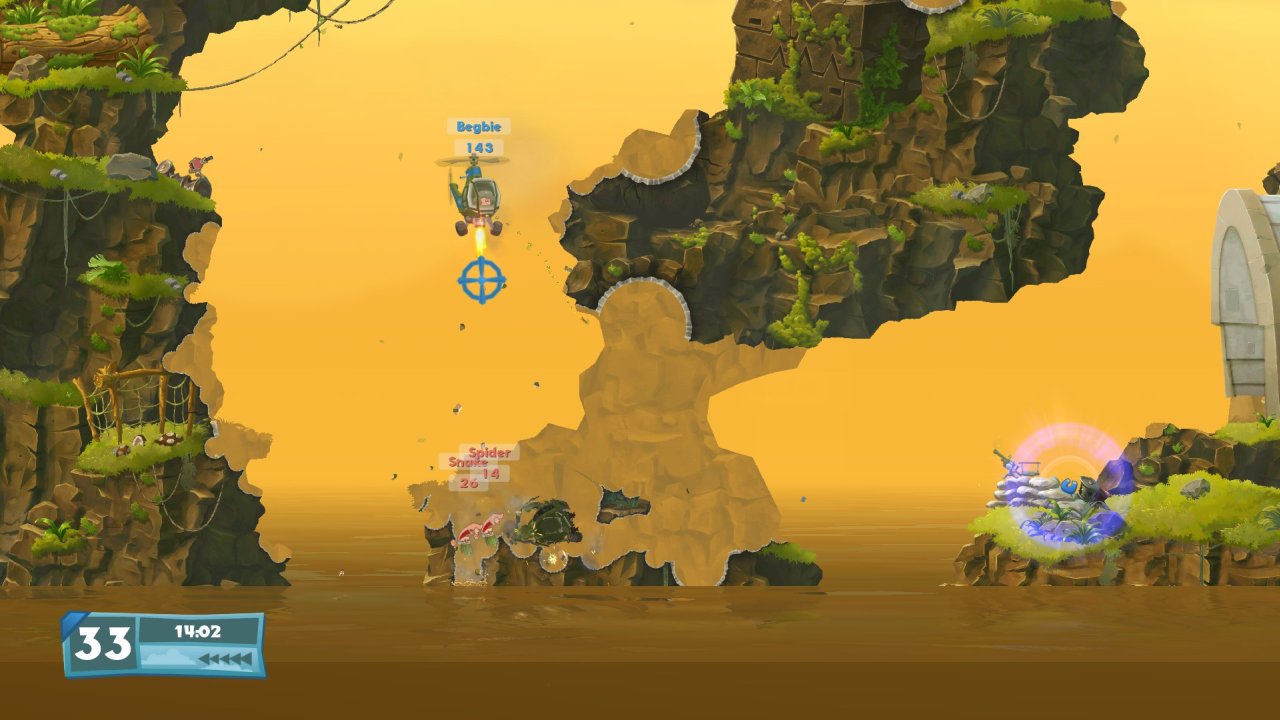 For those unfamiliar with the series, the core gameplay loop that has endured for over two decades is a turn based deathmatch between teams of goofily adorned and voiced worms fighting to destroy each other with a large arsenal of comical weapons on a randomly generated, deformable 2-D map. All of these elements are present and accounted for with Worms W.M.D. However, as with every Worms entry, there are some new additions, and this time they are actually quite meaningful.

The first thing you will probably notice are the vehicles and weapon emplacements scattered around the maps. It’s hard to figure how vehicles would fit into a Worms game given the obstacle-ridden and often vertically oriented terrain without some kind of compromise to map complexity. Fortunately, Team17 came up with quite a good solution for the tanks, helicopters, mechs and race cars you find scattered around. Tanks and race cars can drive over smaller obstacles that a worm might get stuck on, ignoring small bumps and lips. They can also jump, which looks ridiculous, but lets you clear the larger holes in terrain that tend to form from explosions or make it up short lips. If you get to a large cliff you’ll need to get out, but these two vehicles still come in quite handy, especially the Tank which can lob a series of shells at near or distant targets.

Mechs and helicopters are even more maneuverable; helicopters can simply fly around, reigning unwieldy machine gun fire on unsuspecting worms below. The mech has rocket-boosters that let you fly short distances after jumping, and comes with a slam attack that can send worms flying. Any worm inside a vehicle when a turn ends will take less damage from enemy attacks, but after a vehicle takes enough damage, it will explode and hurt whoever is inside. It is also possible to pull a worm out of a vehicle if you get close. Vehicles might just be the best addition here, giving you new traversal options and some a fresh take on cover.

Emplacements are a bit less exciting but still meaningful. Scattered around will be machine gun, mortar, sniper and flamethrower emplacements that are a bit more potent than basic worm weaponry. The weapons aren’t quite as straightforward as they might seem; the machine gun has a lot of recoil, the mortar requires careful use of angles for indirect fire and you need to keep an eye on the wind direction before using the flamethrower. 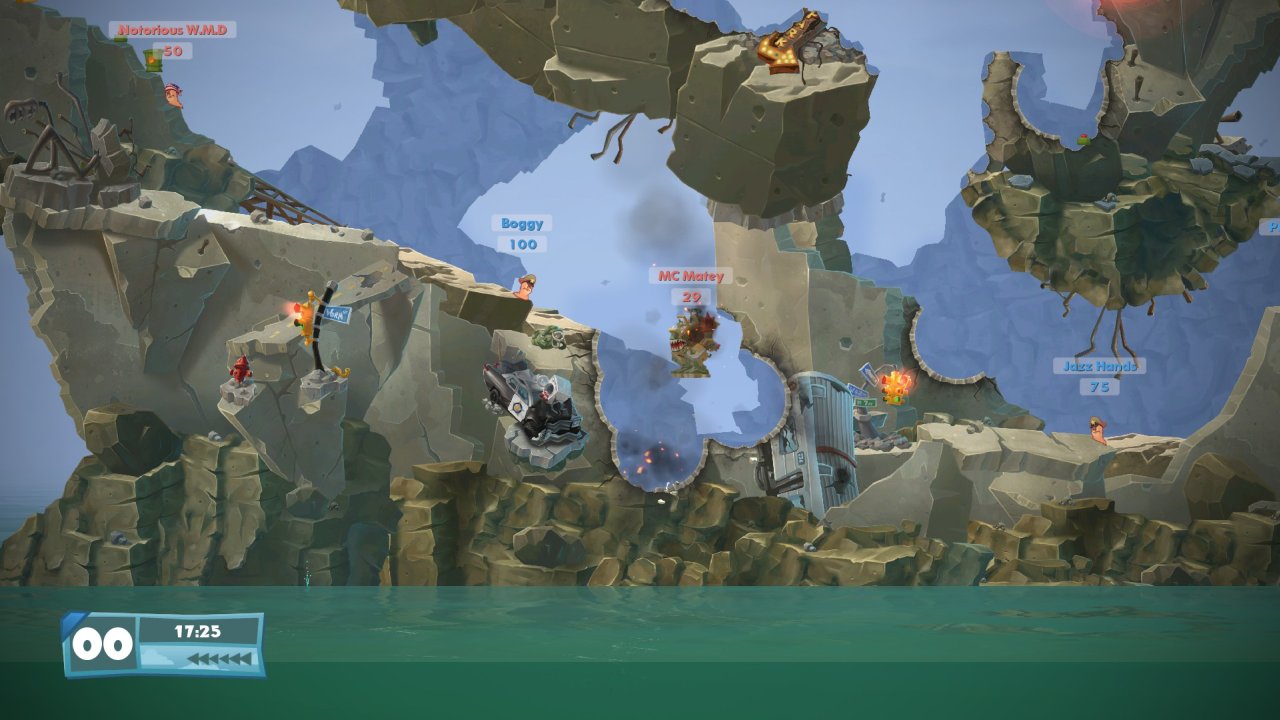 While maybe not as immediately game-changing, the implementation of enterable buildings might be the most clever design element in W.M.D. Structures around the map appear the same as normal terrain until you get close and find an opening. At that point, you can see the interior depicted by black terrain. If you go in, you can see and shoot out of the building but worms outside cannot see or shoot in. This adds a meaningful strategic layer and controlling buildings can be a good way to keep your worms safe for a couple of turns or lay traps for enemy worms who cannot see what is inside.

Crafting also makes its debut here, with most new weapons in W.M.D being accessed this way. You will find crafting materials in certain crates scattered around the map, and you can also dismantle weapons for crafting components. You can craft normal weapons, but also more powerful versions if you scrounge enough components. Is your enemy holed up in a concealed cave? You can craft a mega-bunker buster for that. Want a banana bomb that can be detonated remotely? You can craft one of those as well. Crafting can also be done while enemy teams are taking their turn so it gives you something to do while waiting and doesn’t eat into your turn time.

Beneath all of these new additions, the classic gameplay formula remains, including a few long-standing warts that still stand out. Normal movement can be finicky and irritating when paired with terrain that has been filled with explosion craters or if a randomly generated map has a lot of uneven ground. You might get caught on tiny pieces of terrain that remain floating in the air after an explosion; vehicles are prone to getting stuck on these as well, or you might accidentally shoot one of these fragments, hurting yourself instead of the enemy. None of these issues are deal breakers, but they have been around for so long it’s surprising Team17 haven’t done anything to address them.

W.M.D can’t be faulted for how much content it has to support these gameplay mechanics. For singleplayer, there are comprehensive training levels, thirty campaign missions, challenge missions you unlock by finding ‘wanted’ posters scattered around the campaign levels, and even a good number of bonus levels. The campaign levels start out almost insultingly easily, especially in light of the comprehensive training levels, but quickly become more interesting as more gameplay elements are introduced. Encounters begin to play out like puzzles, with worms, vehicles and other items laid out in such a way that there is usually an optimal means of completing a level if you can figure it out, hinted at by bonus objectives for each mission. 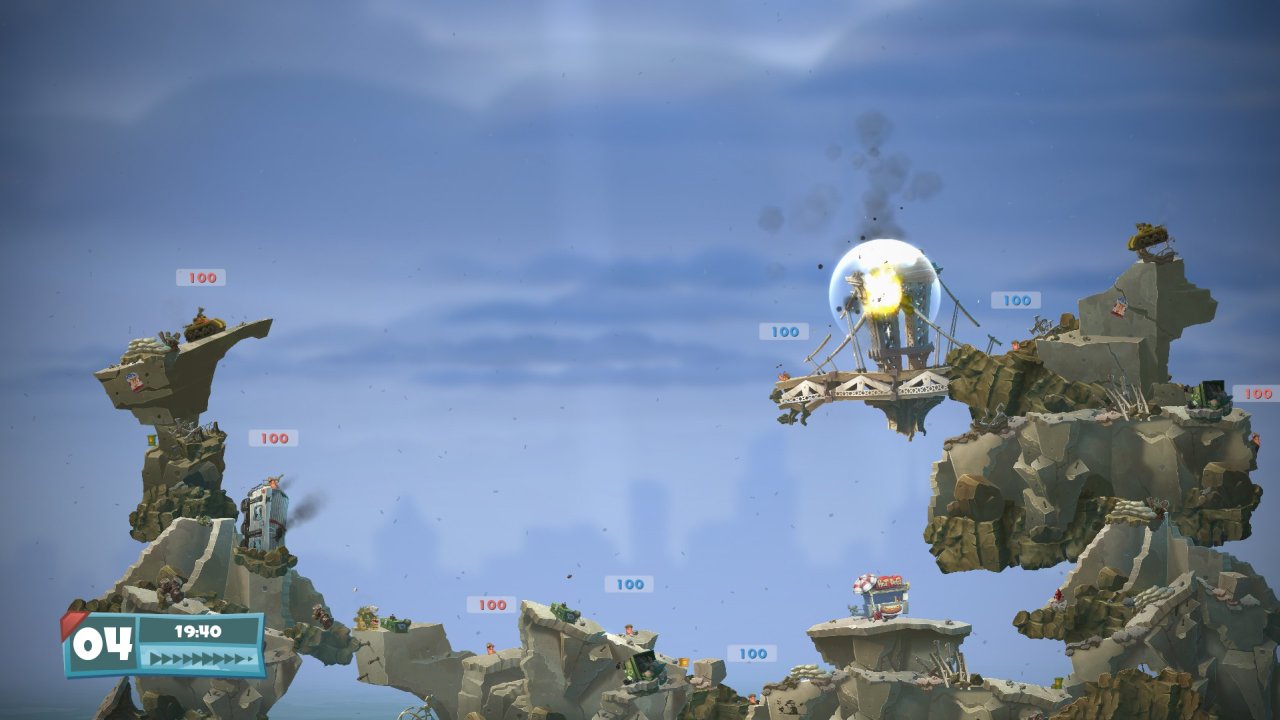 Many levels see you massively out-numbered by enemy worms, but explosive barrels, mines and other crates are placed such that a well-placed shot will set off a spectacular chain reaction that will do massive damage. Just as often, you will misplace that shot and your own worms might see an early grave. Challenge levels play even more like puzzles; you might start with no weapons at all and be forced to use environmental objects in clever ways to complete them.

The biggest issue facing the singleplayer modes is inconsistent AI. Sometimes they will behave in a reasonable manner, making imperfect shots that emulate a human player. However just as often they will either perform some preposterous maneuver like shooting a bazooka straight into the air such that the wind carries it directly to one of your worms, something a human player would never be able to predict. Even worse is the tendency of worms to skip their turn for no good reason; sometimes they will pull out the turn-skipping item but never activate it, sitting there while the turn timer drains. The clever level design helps mitigate this issue and levels still become quite challenging later on despite the AI’s occasional stupidity but it’s a shame a bit more work didn’t go into this aspect of the game.

Multiplayer options are equally robust. You can take your fully customized team of worms online for ranked and custom games, face off against AI or enjoy the classic local-multiplayer experience. Ranked games are 1v1 and involve short turn times and placing each worm manually on the randomly generated maps. There is a sort of skill system that ideally would match you against opponents of similar ability, but I’m not sure how effective this is given the relatively small player base. I was however able to find a ranked game every time I tried searching.

Custom multiplayer games is where this series has always shone, and W.M.D is no exception. You can choose from a good variety of custom rule sets that govern things such as available weapons, turn time and worm health, or create your own. Worms is at its best when you get a few friends together and create some ridiculous rule set that leads to unpredictable chain reactions as worms go flying and the terrain gets blown to pieces, whether it be online or locally. If you want a classic worms experience, most of the new elements can be disabled. For online games it’s also worth noting that the net-code has been notably improved from Worms Revolution which had some de-sync issues. 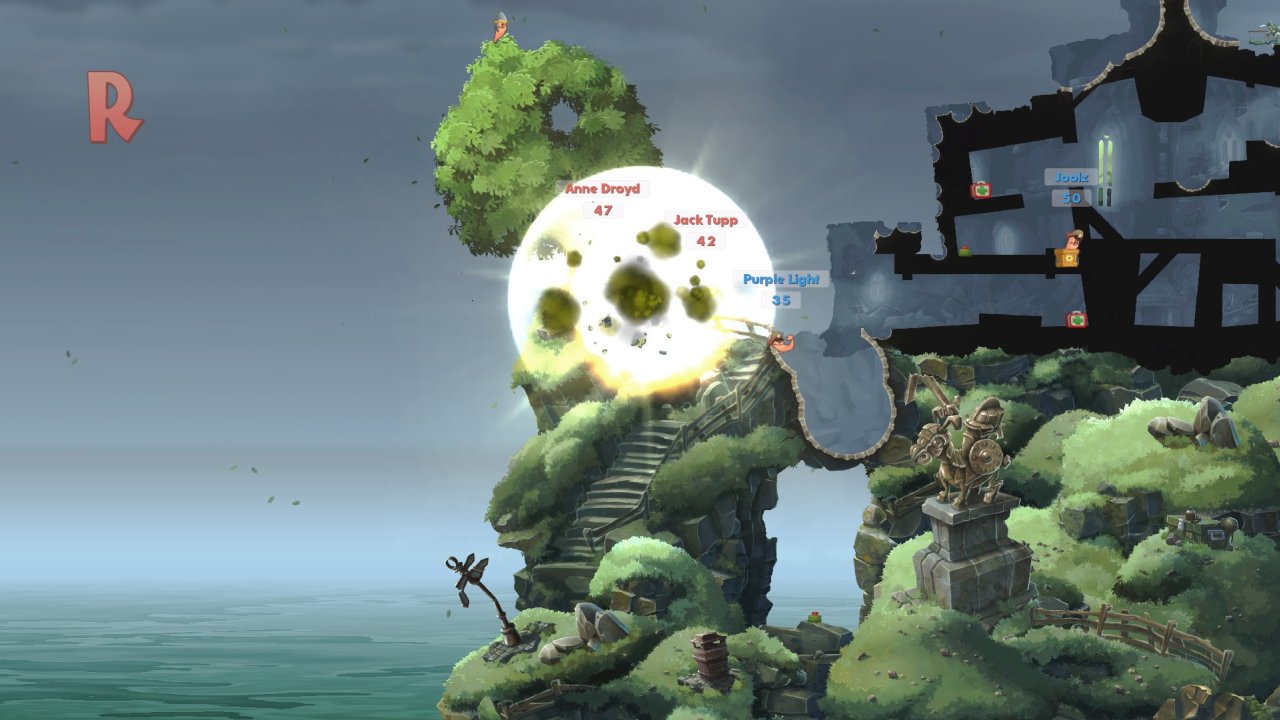 The characteristic cartoon art style that has been with the series since the beginning returns once again, a bit cleaner and sharper than before but with the overall aesthetic intact. There are a good amount of different environments ranging from a snowy Soviet-themed terrain to a jungle-themed one, though there isn’t much functional difference between the different locations. Fire and explosion effects have been improved, but there are some surprising and unfortunate slow-downs during particularly explosive chain reactions. These don’t affect gameplay but they are hard to excuse in a 2-D game with cartoon graphics running on a powerful PC. The iconic sound effects for worm voices and weapons have returned, and remain nostalgia-inducing; the gentle soundtrack works well enough but isn’t exactly memorable.

If you haven’t played a worms game in a while and like the idea of vehicles, enterable buildings and crafting mixing with the usual formula, W.M.D will prove a very solid purchase thanks to a healthy amount of content for both online and offline play. It’s a shame that the AI in singleplayer is so problematic and that some legacy issues are still lingering, but overall W.M.D will please any banana-bombers out there looking to send a few willing invertebrates with stereotyped accents and stupid hats to an early grave.

70
Net code has been improved but stuttering and frame-rate dips accompany the larger chain reactions of explosions.
Overall
80
Worms W.M.D is another rock-solid entry in this remarkably long-running franchise; meaningful gameplay additions in the form of vehicles, crafting and buildings keep things fresh without betraying what makes this a classic series. 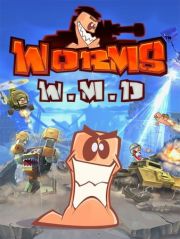