A lot of potential is eventually drowned out by tedium

There’s two-thirds of a good game in ReCore. Not an excellent game, not a game that is likely to spawn a Halo-esque franchise, but a good game. Then the last third promptly drains the game of its goodwill and leaves with a pretty bad taste in your mouth. Produced by Keiji Inafune's Comcept and developed by Armature Studio, ReCore feels like the kind of title that may slip into obscurity within a few weeks, forever destined to be purchased during holiday sales and garner a legacy of being better than people say it is (see: NeiR and Darksiders) because they’ll likely only play the first few hours, then walk away with their shoulders shrugged wondering why people disliked it so much. If could review half a game and forget the rest, ReCore would rank higher than most - but I can’t. I have to review the whole thing and ReCore, as a whole, isn’t very good. 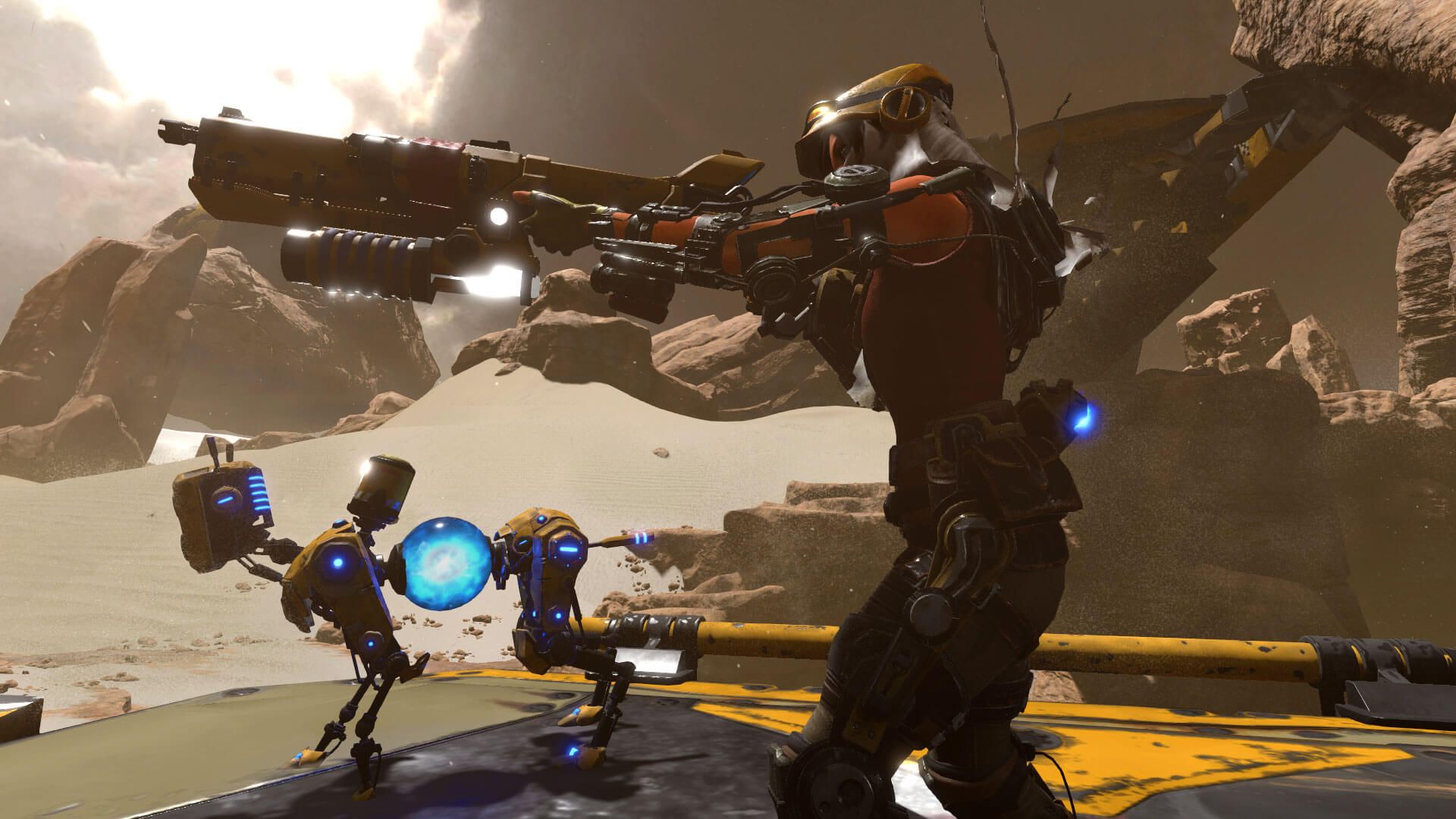 The plot is paper thin, mostly designed to keep Joule together with her robot pals and justify where you’re going and what you’re doing to get there - but it works well enough. Not well enough for me to want more of it, but not bad enough that I was annoyed by its presence. Mostly it worked because I wanted it to work; I wanted to see Joule find her robot companions and get some answers as to what was happening to the remote colony of Far Eden. I wanted to know what happened to all the people. I wanted to know where Joule’s father was. I wanted to know what's the deal with these mysterious cores and why they were important. I didn’t get a lot of those answers, but I at least wanted them.

Before I get negative about ReCore, I’ll take a moment to highlight one of the game’s best parts - the characters. ReCore boasts a cast that is largely likeable, despite the fact that almost none of them talk in a language we can understand. Joule is our protagonist, and although a bit vanilla, she endears herself with her kind spirit and naive-like determination. She’s trying to find her father, while her mother is already dead, but Joule is still all smiles despite possibly being the last human being alive on the remote failed colony of Far Eden. Cynics might find her insufferable, and I think I would too if there wasn’t a fun-loving quality the character exhibits outside of cutscenes. She laughs when being swung through the game’s platforming jungle-gym, or when dangling thousands of feet in the air from her flying robot, and because she’s having fun in what many would consider a nightmare scenario, we want to have fun too.

Then enter her trio of robotic sidekicks, each with their own one-note personality. Again, the robots might be a little too simple to be considered interesting characters, but we’re not inundated with their personalities so they never get annoying. Instead they provide interesting commentary on the gameplay and Joule herself. I don’t know if I’d go so far as to say I cared about these metal creatures (at least in a sense of if they lived or died), but that is more of a gameplay’s failing - and we’ll get to that later. 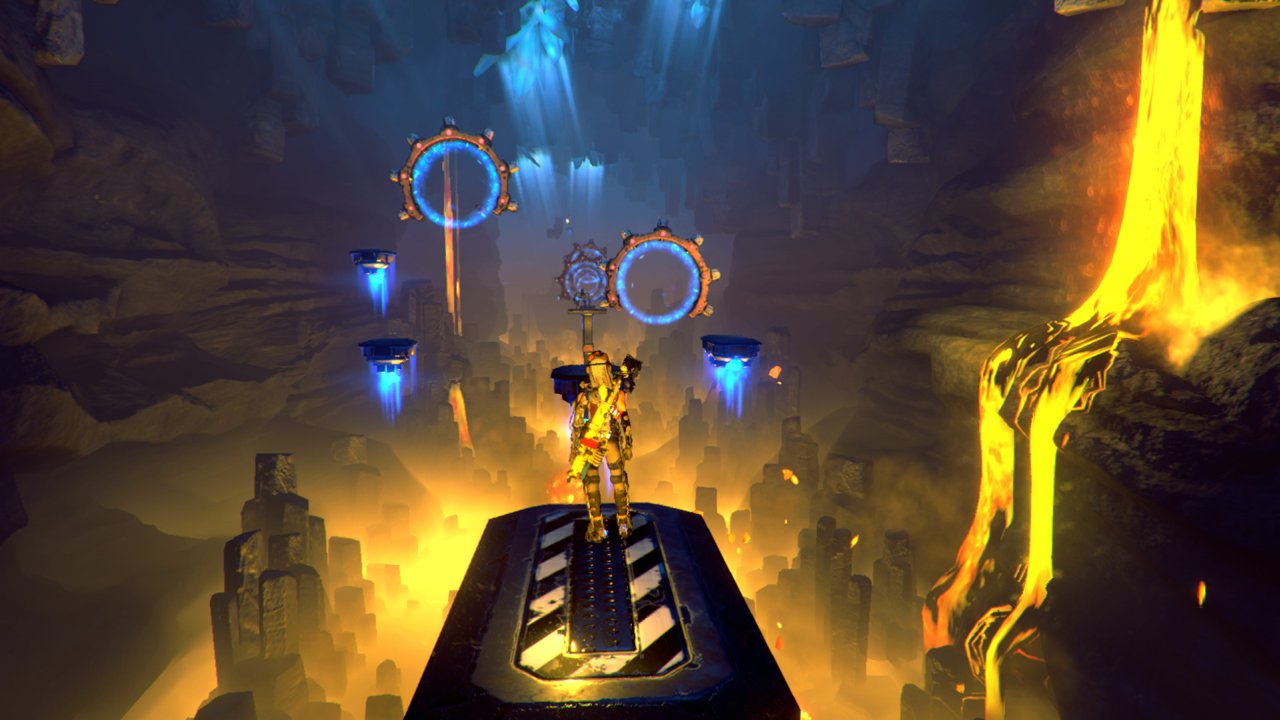 The gameplay is where ReCore starts to get into shaky ground. The biggest problem is that it feels like ReCore was designed as a linear, platforming/action game but suddenly decided that it wanted to bring in a slew of metroidvania elements. Without giving too much away, ReCore’s thin story guides you through a desert of destruction, asking questions, giving out bits of story and teaching you the mechanics. Then, at what seems like a natural climax for the game, it pushes you out into the previously explored areas to bash your head against painfully difficult dungeons in order to collect a ridiculous amount of junk, padding on another five to eight hours.

The side dungeons (that aren’t optional, as players will discover) feel like they should be extras, designed for those who like to 100% a game and rack up their gamerscore, but to those of us who were just enjoying the story and characters it basically strips away the most likeable things about the game and demands you to punish yourself for its amusement. It’s like playing through all of Uncharted 4, getting to the boss fight, beating the boss, and having the game say “Alright, now go collect all the treasure on the hardest difficulty if you want to see the ending.”

It’s not like ReCore’s gameplay is atrocious. It’s fun enough. Joule has a nice double-jump and a booster move that makes the platforming a bit fun. When her own skills fail her, each of her robot companions have something special they can do to help out with the platforming, like climbing walls or bashing obstacles. The dungeons are often creatively designed and decently fun, but none of it is smart enough to justify some of the later challenges as you mindlessly wander the desert planet trying to locate every single core. 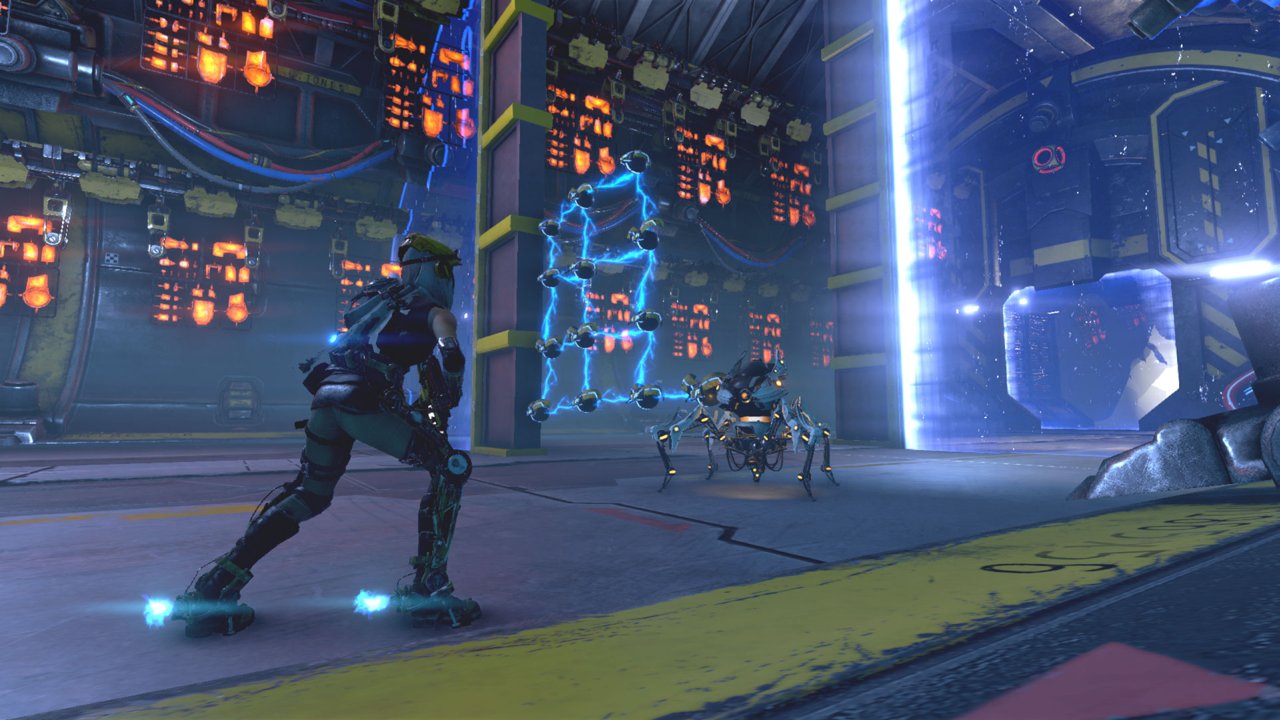 The same is true of the combat. Joule’s gun uses a sticky auto-aim feature that’s less than great, but your robot companion is usually drawing the fire of your enemies, giving you ample time to wrestle with the sub-par shooting. In the beginning fights can be exciting as you command your robots' attacks, blast away at enemies, and then pull the core from the weakened body of your foe. It’s colorful and chaotic, but quickly grows dull. About halfway through your robot companions are nigh invincible and so combat becomes boring as you sit at a distance, taking potshots at enemies, hoping they don’t suddenly charge at you because if they hit you, it’s almost an instant death. And as you retread areas for the umpteenth time, soon battles become annoying inconveniences, rather than exciting matters of life and death.

The metroidvania elements undo the game’s visuals as well. The character work is alright. The robots are lively animated and Joule’s sunburned shoulders are a nice detail, but it’s obvious more attention went into crafting the wide vistas of rock and metallic debris in the distance. Your first time visiting each of these locations warrants a nod of appreciation and they don’t outstay their welcome while playing through the story, but once you’re back in the same stretch of desert searching for goodies in the sand, you begin to wish there was a little more variety.

The most damning element to ReCore is its technical aspects. Before the game launched, the load-times were appalling. This was how my time was spent waiting for ReCore: I would pick up my phone, scrolls through Twitter, check messages, forget why I had opened my phone, put it down, realize the game was still loading, and pick my phone back up. It seems that a day-one patch has trimmed the time spent waiting, but not nearly enough for all the backtracking and fast-travel you’ll have to do. I also experienced frame-rate drops in cutscenes and texture pop-ins. Rumor has it that the Windows 10 version of the game runs better, if you’re interested in that. ReCore is in fact the very first game to launch under Microsoft's Xbox Play Anywhere program, meaning your saves/achievements will carry over between the two platforms, and buying a single digital copy grants you the game on both platforms as well. 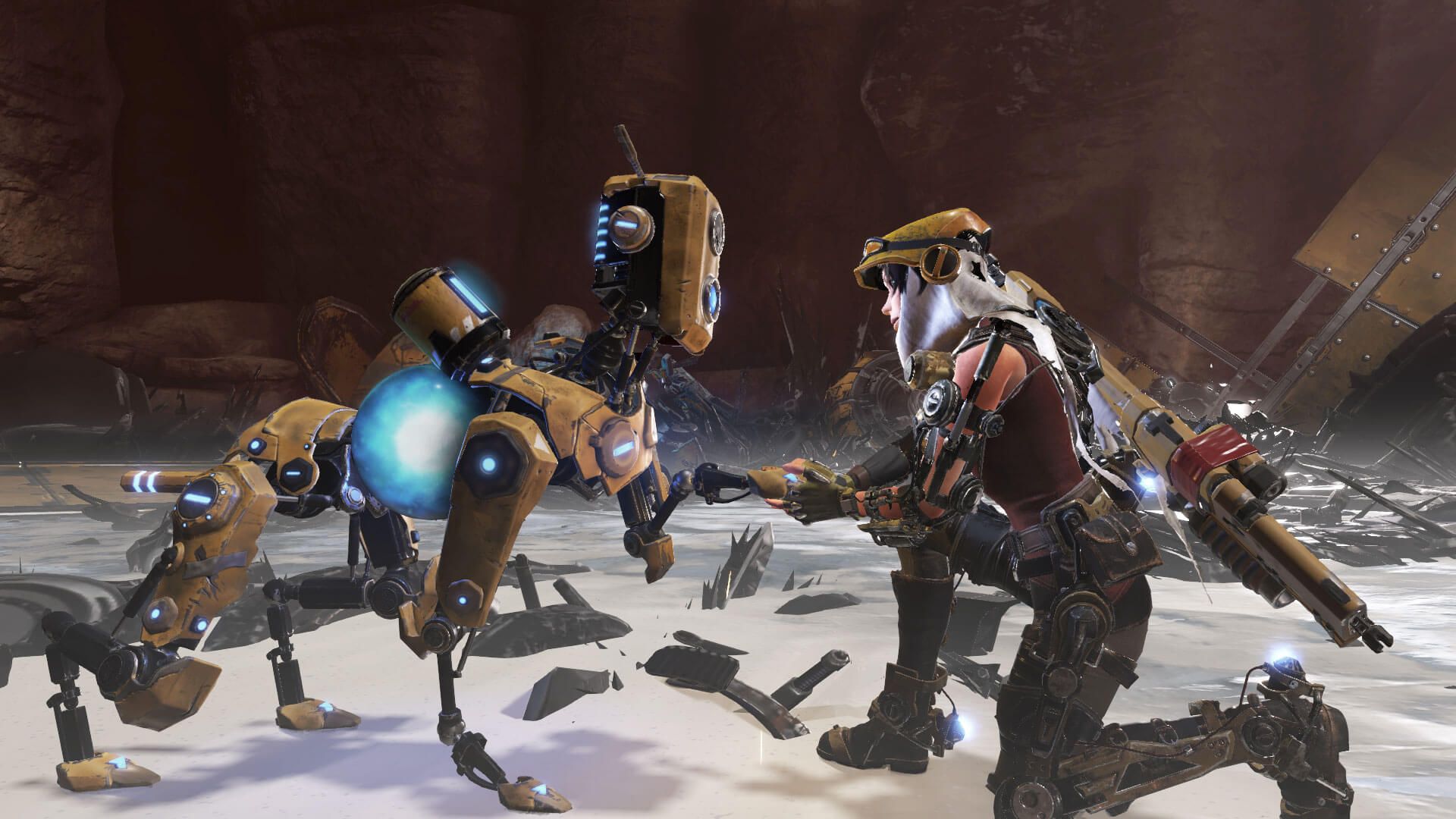 I have to say again, I really did like the first ten-ish hours of ReCore. For a good chunk of time, it’s playful and fun. The aesthetics and mechanics aren’t astounding, but it’s an unassuming bit of good action. Then, when you hit what you think is the final boss-fight, the game becomes the grind of all grinds, and it’s there that it completely lost me. I’d actually recommend ReCore. I think that optimal way to play ReCore is to enjoy the story, get to the boss fight, and pretend the game ends with a satisfying conclusion. How good are you at self-delusion?

Our ratings for ReCore on Xbox One out of 100 (Ratings FAQ)
Presentation
70
Environments are nice at first, but you can only stare at pretty rocks and high-detail tech-rubble for so long, especially the same rocks and high-tech rubble.
Gameplay
69
The platforming and combat are serviceable. It works much better when there’s a story to distract you from it.
Single Player
68
Playful characters go a long way toward making the plot bearable. But once ReCore starts leaning heavily on its metroidvania trappings, it loses all that goodwill.
Multiplayer
NR
None
Performance
55
A patch has eased the pain of the loading, but there’s still plenty of issues with the Xbox One version of the game.
Overall
68
I liked ReCore's first part enough that I wish this score could be higher, but taken as a whole the game can't be qualified as “good”. Again, I like ReCore, but I can’t recommend it without tacking on a few asterisks. 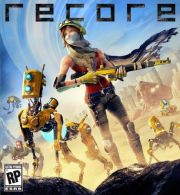 All videos for ReCore (5)
Advertisement ▼