While Call of Duty XP 2016 was taking place at The Forum this weekend, a more personal set of conversations were happening in the Forum Club area. This small lower level lounge was home to a series of panels for the fans that wanted to know more about a particular aspect of the Call of Duty universe. We had a chance to attend a panel entitled Creating the World of Call of Duty: Infinite Warfare - Navy meets NASA Design. It was moderated by Brian Horton (Studio Art Director at Infinity Ward), and attended by Aaron Beck (Principal Concept Artist – Infinity Ward), Thomas Szakolczay (Lead Concept Artist – Infinity Ward), John Dobbie (Environment Art Lead – Infinity Ward), Joby Harris (Visual Strategist), and Peter Meakin (Spacecraft Systems Engineer).

Brian kicked off the panel by asserting that Call of Duty has always strived to create an authentic shooter experience by using tech that already existed or was historically documented to exist. The challenge for Infinite Warfare was to bring that authenticity to the new interstellar setting; in this case, there is nothing to reference or base on real world designs. Still, Infinity Ward wanted to offer legitimacy in its vision of the future, and were heavily inspired by NASA’s outlook and theoretical designs.

Thomas described the two distinct aesthetics that exist in Infinite Warfare – NASA and Navy inspired. With NASA, the designs are usually more exposed and barebones, while Navy is usually after as much firepower and shielding as possible, so a balance had to be defined. In their final designs, the teams leaned towards a Navy silhouette, and then introduce some NASA inspired concepts.

Everything is pragmatic in space, Peter added. Engineering must be as practical as possible. Mass is the biggest thing to consider – the heavier something is, the harder it is to get it into space. And that’s one of the conflicting features of NASA and Navy design. Joby agreed; things need to be going fast to break through the gravitational pull. These days, the engineers at NASA are trying to figure out how to launch small things and then “unfold” them into bigger pieces once they are in space, when mass and gravity no longer matter. Trying to build something in space is where the industry is going nowadays.

Thomas continued that the different starships that are present in Infinite Warfare were inspired by the Navy. They took the existing designs of an aircraft carrier, for example, and retained its flat top design, went through a process of mapping out all the systems and functions this ship would need to operate in outer space, as well as carrying additional ships. The aesthetics were built around function. Surfaces and materials used also have to feel similar to what we’d expect to use today, but must also support futuristic functions. A lot of this is sci-fi, and the team admits to taking some liberties with the design.

Peter continued to discuss the challenges of operating a ship in space; it is very different from anything on Earth. The panel showed off a few concept designs on internal workings of the ships players will see in the game. Peter mentioned the dangers of space – the vacuum, the radiation, and so on. Not to mention, parts that we typically use on our planet don’t work quite as well in space. So things like engines and propulsion systems have to be carefully designed to function and also withstand harsh conditions. Players won’t see all the internal workings of space vessels in the game, but the developers assured us that it was well thought out and used as inspiration for the actual playable areas. Peter says that some of the concept art from the game isn’t too far off from what NASA may have designed internally.

Those playable spaces include the bridge. Brian commented that this is a central space, where players spend a bit of time in game. So they had to make sure the design was solid, and it was easy to navigate, taking cues from Navy designs. Other parts of the ship, such as bridges and launch pad, were also briefly shown. The panel also touched on the Jackal, the ship players will get to pilot. This aircraft needed to be designed to function in atmosphere, be able to break away into outer space, and traverse through vacuum. Thus, it was given VTOL functions, boosters, and thrusters. The visual design, however, was inspired by modern jets and space shuttles, thus keeping it feasible and relatable for players.

Character design was up next, and Aaron provided some insight. Aaron is new to Infinity Ward, having previously worked in film where realistic sci-fi is also often a focus. His ideas for characters were centered around the classic good guys and bad guys. He gave the Marines a clean look, with sort of rolled up sleeves, thick leatherneck, and precise component selection. The new space suits can create mechanical pressure to operate in low gravity and vacuum. SDF soldiers, meanwhile, he wanted to be easily and immediately identifiable as the enemy. Their suits are more personalized, put together via a variety of different parts they collected overtime. The design isn’t as clean or standard as for the Marines. You can see some exposed cabling, multiple forms of redundancy, and a bit of a Soviet feel.

Aaron also talked about incorporating the Synaptics into your squad. Despite being AI robots, he wanted to give them personality, and have the AI named Ethan feel like a key part of your team. Aaron used his brother as inspiration for Ethan – he is a heavier guy, with a strong personality and a fan of motorcross. Ethan’s design reflects some of those features, with a bigger body, and pistons in his helmet. He can crack a joke and then go to war, and hopefully the players can feel they can trust him. Peter added that robots are becoming a part of society more and more, and in a space setting, we’ve had rovers for a while. Peter jokingly asked if Aaron’s brother knew he was the inspiration, and he did; he is also a big Call of Duty player. 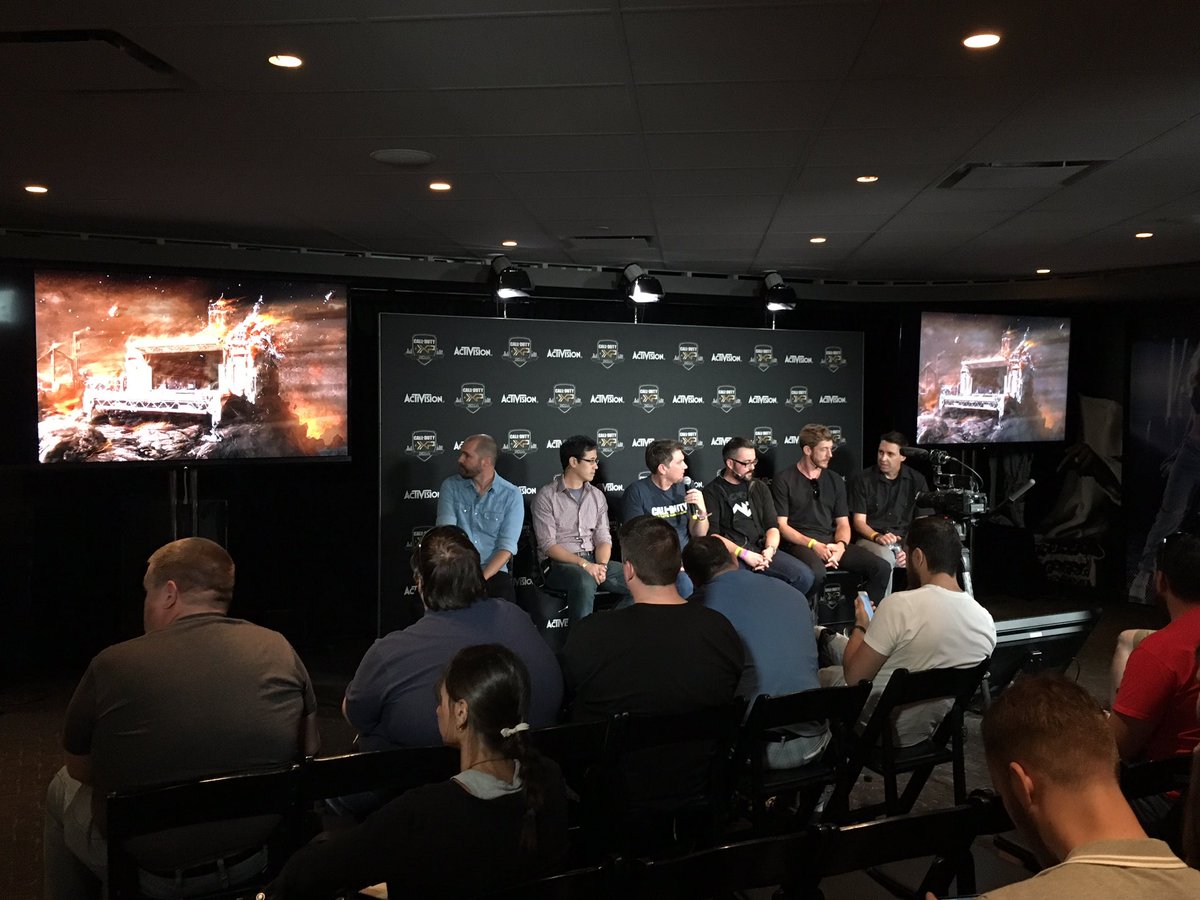 The other bots were designed with care as well. The enemy C6 Chassis C needed to feel threatening, and Aaron designed them with the idea of strong aluminum bodies, aggressive styling, and a focus on practicality and combat effectiveness. The bigger C12 Chassis (a mobile tank unit) has similar aesthetics, but obviously has more firepower and needed design tweaks to support its larger upper torso. Joby joked if C12 was based on any family members, but that wasn’t the case.

With the environments, John said the team wanted to create compelling locations, places that players may think they know, but looked at them in a new way. We all have an idea of what Mars looks like, but the challenge for Infinity Ward was to create aesthetics that work in single and multiplayer from a gameplay and structural perspectives. John showed off some concept art of the red planet, with a Biodome, terraforming facilities, and ability to 3D print concrete blocks for construction. The Moon is one of early locations – but it’s not just the surface with a base – it is a large space port that was inspired by Dubai, complete with a dock, hotels, and the comforts of Earth. They wanted to make it as inviting as possible, which is in stark contrast to other locations where conditions are very hostile.

For example, we were shown concept art for asteroid research and mining facilities. The architectural design here was modular, for quick and sturdy construction and less concerned about looking welcoming. Another location is Titan (or Saturn VI), the largest moon of Saturn that is covered in methane, and is the only known location outside of Earth with clear evidence of stable bodies of surface. John joked that the game version of Titan also has rain and moving liquids. Joby and Peter also talked about Europa (Jupiter II), the sixth-closest moon of Jupiter. A NASA trip to this moon is planned for 2022, and they always wonder about finding new elements there. The Europa map is in the game, imagined as a research facility amongst a frozen wasteland.

Joby talked a bit more about his work with NASA. Unlike Peter, he is not an engineer, but rather part of a design studio that was hired by NASA to create art that would get the public excited and interested in NASA projects. He has created some art for the Exo planets, based on theories of what could be found on them. These posters were originally not meant to be released, but they leaked (and crashed NASA’s website), generating a lot of interest, so Joby’s team was hired to create more. 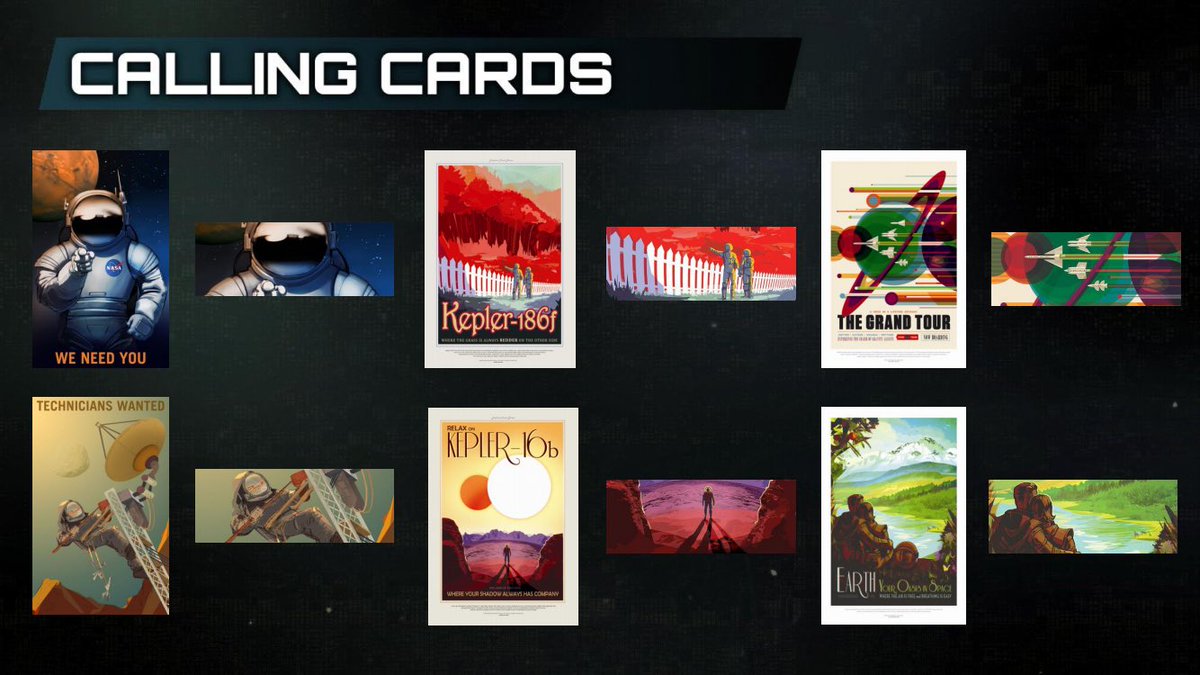 Peter has been at NASA’s Jet Propulsion Laboratory for 12 years. He has worked on Earth orbiters, Mars exploration robots, Juno project (briefly), and the mentioned Europa trip of 2022. He is excited to see how Infinity Ward has brought these distant celestial bodies to life.

There was time for a few fan questions. One person inquired why the robots in the game could only see in one direction – surely a 360 degree camera would be more useful. To that, Aaron said it made the most gameplay sense not to insta-kill players from all directions, while Peter said that rovers we’ve sent to Mars don’t even have 360 degree cameras. Elon Musk had apparently asked this question before, as well.

Another person also inquired about how such a collaboration between a video game developer and NASA can happen. Brian had commented that working with Activision and Call of Duty already opens a lot of doors, and the team has access to real military equipment and personnel many times in the past. Joby clarified that NASA has created a specialized program, where a group of consultants are available to answer questions. This program is often used by Hollywood, and in recent years by others as well such as game devs. This consulting service doesn’t brand the game or movie as NASA-approved, but it does provide some guidance for the creators.

With that, the panel concluded. It was certainly interesting to hear more about the actual science and inspiration behind Infinite Warfare’s setting, even if most of the details were conceptual rather than factual in nature. Everyone who attended the panel received a poster that’s one of Joby’s designs that were sanctioned by NASA.