While the Call of Duty XP 2016 was all about the grand e-sports tournament and getting fans their first ever hands-on with the latest game, a more personal set of conversations were happening in the Forum Club area. It is a small lower level lounge where a series of panels were hosted for the fans that wanted to know more about a particular aspect of the Call of Duty universe. We had a chance to attend a panel entitled The Making of Call of Duty: Modern Warfare Remastered, moderated by Jeremy Soule, Sr. Manager of Employee Communications at Activision Blizzard. The panel consisted of David Pellas (Studio Director – Art & Design – Raven Software), Mike Denny (Lead Designer – Infinity Ward), Oscar Lopez (Multiplayer Designer – Infinity Ward), Thomas Wilson (Co-Studio Head – Beenox), and David Mertz (Design Director – Certain Affinity) . 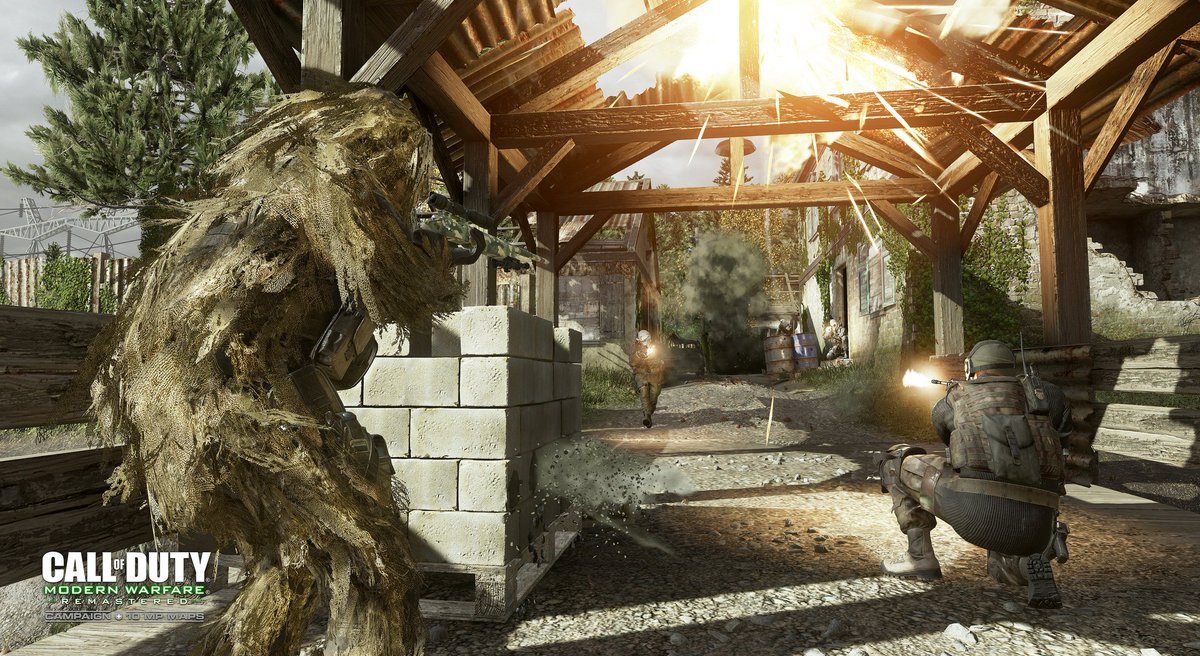 The panel began the talk by sharing what made the original Call of Duty 4: Modern Warfare such a classic game. For Mike, COD 4 really came through with its storytelling, as the game brought in a large scale modern setting to the franchise. It offered new player experiences and interwoven story elements that haven’t really been done before, such as the opening first-person sequence. Mike also sees Modern Warfare as the game that began to really evolve the franchise’s multiplayer with RPG elements of levelling, perks, in game rewards, killstreaks and so forth.

For Oscar it was more in the small details. For example something like the intro credits – it was much more cinematic than anything that the developers had attempted before, either in shooters or other genres. They focused on never taking control away from the player, so even as those credits rolled, you could still look around. It was a unique experience. David Mertz also agreed that the game holds up very well. He expressed his surprise at how well the narrative threads carried on between missions and even into multiplayer.

Going back to play through the original game in preparation for the remaster, the sheer quality for its time is what stood out the most for David Pellas. It also made him realize what a daunting task it will be to bring the game to a modern audience, improving its visuals and audio while maintaining the feel of the gameplay. The original still looks and feels rather good, so doing it justice is very important.

Thomas chimed in as well – all the developers involved are doing their best to create the finest remaster possible. And as the teams went back and dug into the original assets, they were amazed at how high-quality those components already were. The teams also focused on looking at the game through the eyes of someone who is nostalgic about the experience, but also considered the modern-player expectations and required standards. 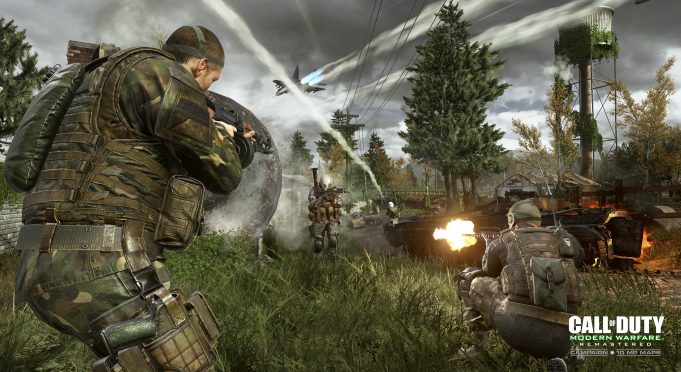 There were four main focus areas for the remastering project. Respect original game, modernize visuals and audio, improve experience with new tech, and redefine what a remaster means. David Pellas said that everyone at Raven were excited to work on the game, but also had fears associated with living up to high expectations as well as the bar set by the original release. They specifically set out not to mess with the gameplay, and that decision drove all remaining aspects of the project.

For Thomas, the main goal was to crank up the visuals to today’s standard; to add more details, to give each level a sense of its place and history. Basically, the teams focused on what was possible to achieve, without breaking anything in the gameplay. Similarly, for David Mertz the goal was to improve the audio. The teams kept but refined the original dialog, and worked on adding tons of effects – from ambience, to the sounds of falling shell casings. They wanted to have the audio provide as much impact on the player experience as the visuals did.

Oscar noted that the idea for remastering Modern Warfare started with an online petition that got noticed. Him and a few others who worked on the original game eventually got pulled into a room and shown a proof of concept demo. It was very important to have some guys who worked on the game be involved in this remastering effort. Original meetings with Activision were key to ensure everyone was on the same page, and the core values and goals were defined early.

But going back to audio for a moment, Oscar mentioned the War Pig mission specifically, as players escort a large tank. During the original game’s development, members of the team visited a military base and recorded the various sounds of a tank. However, due to time and tech limitations, many of the audio channels didn’t make it in the game. With the remastered version, players will finally be able to hear the complete details – from the glass being shattered as cars are crushed underneath, to the gears that move inside the tank’s internals. For Mike, who has a background on working primarily with single player, the focus was to ensure the AI fought the same way. If a mission was challenging, it has to remain this way in the remaster. 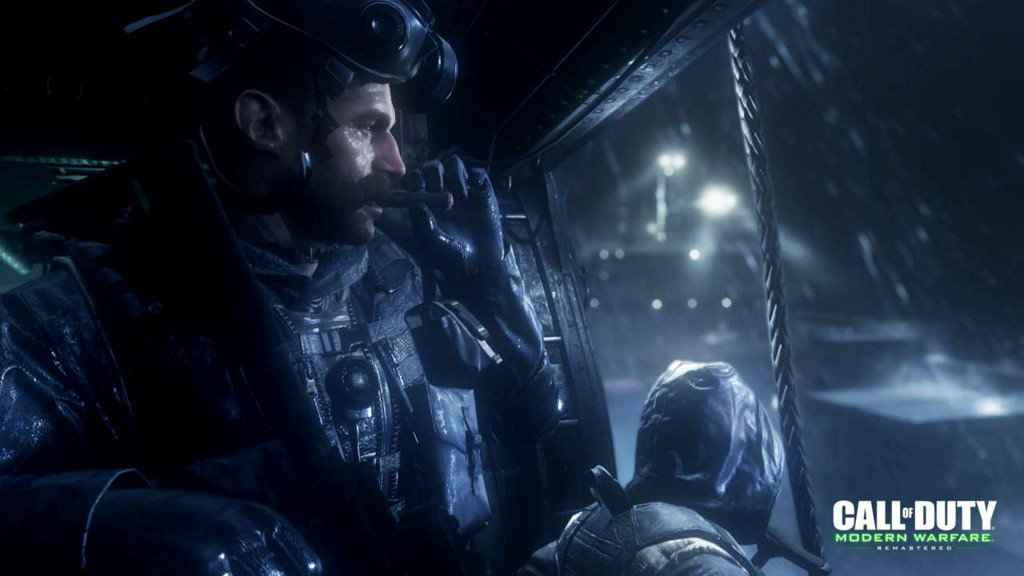 The panel then showcased a few character renders for the audience, the original and then the remastered version. First up was the iconic Captain Price. The focus was on making this character look good, and also add some personality that wasn’t there before, thanks to increased detail. His beard is now individually modeled hair by hair, and they worked to add depth and emotion to his eyes. The team wanted to set Price as the standard in quality for all other characters. The panel joked that they even added hair in the ears of Imran Zakhaev.

The same attention and care was paid to the weapons. All of the gun models have new reflections, added details like scarring, updated textures, and so on. A very cool fact is that all weapons in the game will now have accurate ammunition rounds used. We were shown a slow motion video that demonstrated that each gun ejected the correct bullet casings. The original MW used the same casings no matter what gun you were firing.

Vehicles also got remastered. From the cars that explode in multiplayer maps, to the helicopters in cutscenes, players can expect to see major changes, and once again the panel showcased a few comparisons. Oscar told an amusing story – he was doing texture assets during the development of Modern Warfare, and one of his projects was to model the car that would appear in the All Ghillied Up mission. He did the usual – provided a good render for the outside of the vehicle, but left the interior and undercarriage in a basic state. Little did he know that players will find themselves under the car during this mission (the gameplay designers did not share this bit of info), so he apologized for having such poor quality textures underneath the car.

The environments also got a major facelift. Thomas described the Paintover procedure; the team would take screenshots of key areas, and then “paint over them”, meaning draft how these visuals can be improved upon. The process was repeated a few times for each area, and the most affected scenery is usually the backdrops. We were shown a few comparison shots – some of the vistas in the game have been revamped to such an extent that it drew gasps and cheer from the panel audience. Tons of details have been added, and many of the screenshots looked like a completely different modern game. We were also shown a comparison video to better illustrate the changes made. It was a great example of much the visuals have changed, and extra content has been added (such as more action on the ground while you’re in a chopper), more explosions and random gun battles, etc. Further, it was a great demonstration of how much the audio has evolved as well, as even the sound of gunfire was miles ahead in the new Remastered section of the clips.

The panel briefly touched on multiplayer as well, which saw similarly improved visuals, tons of new lighting effects, and so on. For example on Bog, a whole new skyline really changes the feel of the map, and adds more depth to the game world. Shipment is also included, which elicited more cheers from the crowd. Oscar joked that this map was initially just an internal test level, but it turned out to be fun to play so it was included in the final release.

Thomas touched on the animation side of things. There are many new additions like dynamic depth of field, movement of cloth in the wind, clothing interacting with the body of characters and the environment. New animations were also used to add emotion to the game – for example during the iconic atomic explosion sequence, players are no longer just a hovering camera. They’ll notice their character’s hands trying to stop a soldier from being thrown out of a crashing heli, and then trying to hold on themselves. It adds immersion and cinematic feel that wasn’t done the first time around. Another new animation is a gun inspection in multiplayer, similarly to Counter-Strike: Global Offensive.

Friendly AI animations have been improved too. In the original, your squadmades would turn on a dime, so the developers added new physicality to them. AI now lean into turns, grab onto rails, and have refined movement systems. The challenge with adding new animations was to keep the original pacing and timing – so all new movements were tested constantly to make sure scenes still played out as before.

When it comes to technical visual upgrades, the team was able to use various new tech that wasn’t possible at the release of the original game. For example with tessellation and displacement, textures now have added depth and detail that was previously flat. Physically based rendering will be noticeable as light reflects differently based on the surface, such as the stock of the AK-47 versus the rest of its body. There will also be subsurface scattering and screen space reflections. With reactive motion foliage, grass will interact with the player properly – so in the All Ghillied Up mission or in multiplayer, the grass will bend around the player body, rather than just clip through them. 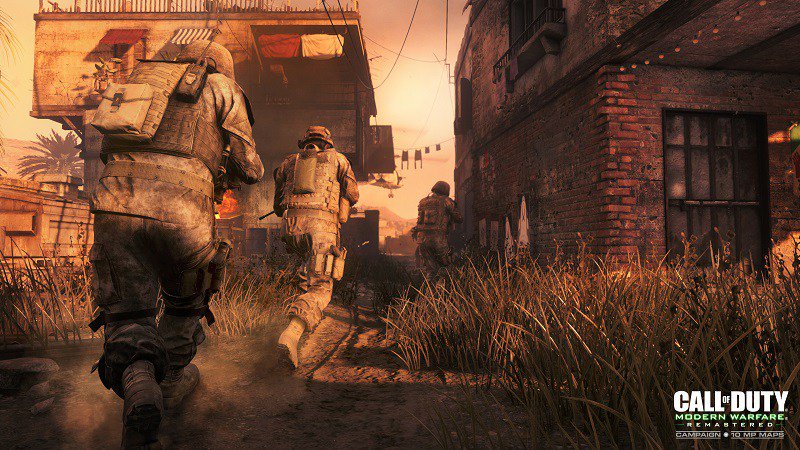 To conclude, the whole panel reflected on their time with crafting this remaster. It is an effort of love, fuelled by the passion of the fans, and it brings back all the great memories that the developers themselves had when playing. It was great to see how much technology has evolved since the game was released, and they are now able to deliver a much more finished product that will hopefully live up to the legacy. This was the most packed panel at Call of Duty XP 2016, so clearly the fans are in agreement. Call of Duty: Modern Warfare Remastered will ship alongside Call of Duty: Infinite Warfare in November.