It is hard to believe that the famed games company Blizzard has gone almost twenty years without releasing a completely new IP. While Hearthstone and Heroes of the Storm might be separate ventures from their previous work, they are directly tied to the likes of Warcraft and other Blizzards entities. Enter Overwatch, an entirely new IP in a genre that seems like a pretty big departure from what the studio is known for. A competitive first-person shooter that is best compared to Team Fortress 2, but with a borderline preposterous increase in the number of classes. While the game’s modes and maps are extremely derivative of Valve’s landmark 2007 game, the twenty-one classes themselves are astoundingly distinct and unique, quickly washing away any fears we are getting a rehash of the formula. 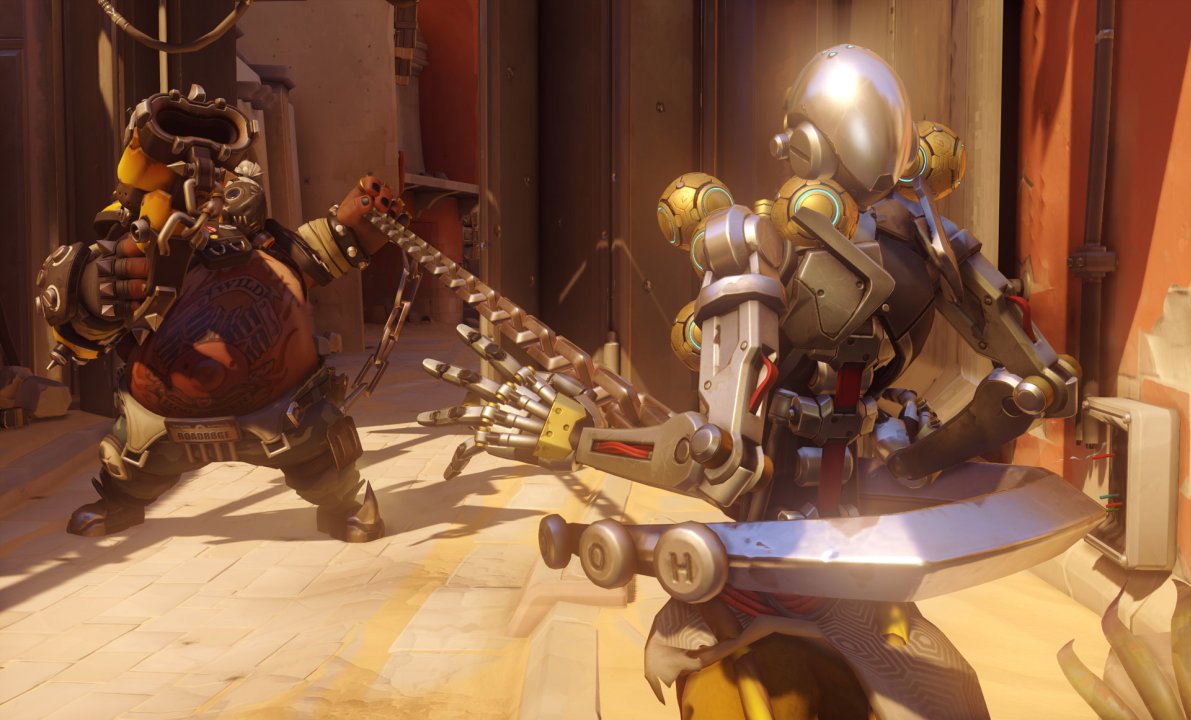 On the surface, Overwatch is very similar to Team Fortress 2. Two teams comprised of six players fight it out across a handful of game modes, such as payload, attack/defend capture points, or king of the kill. Some maps combine the objectives, but if you are looking for new and innovative game modes, you will not find them here. What makes Overwatch unique is how distinct and varied the classes are. Player character classes are divided up into four categories; support, offense, defense and tanks. What you find within and between these categories is dramatically different.

The support class, for instance, consists of a mixture of healers and characters who debuff enemies, or build teleporters. Even the healers are dramatically different; Mercy uses a healing beam somewhat akin to the medic in TF2, while Lucio speeds around on roller-blades, alternating between giving teammates a boost in speed or area-of-effect healing. Offensive characters tend to deal the most damage, but do so in dramatically different ways; Pharah, for example, can jet-pack into the air and reign rockets down on opponents, while Genji’s primary weapon is a sword that can be used to deal damage or deflect incoming damage back at his opponents. Soldier 76 stands out as being relatively straightforward, equipped with an assault rifle, grenades and basic healing ability.

The defenders and tank characters are just as varied; defense characters include a Swedish Dwarf who can build turrets, a grenade-launching psycho and a girl wearing a parka (even in desert-themed map) who annoyingly freezes enemies in place, puts up giant ice walls and can pop into a temporary state of invulnerability to heal and infuriate foes. Tanks include a medieval looking fellow called Reinhardt who has a giant holographic shield that can keep teammates safe, a huge hammer and the ability to charge through foes in a very similar manner to the charger in Left 4 Dead 2. Winston is a giant, highly intelligent ape who can leap around the map, disrupting the other team’s formations. These are just the highlights; going through all twenty-one characters in this review would be impractical.

The amount of variety present in the game’s character selection cannot be understated, and since matches are 6 vs 6, the number of possible team combinations is incredible, especially in casual play where duplicate classes are allowed. While there is no loadout customization in Overwatch, each character has multiple abilities that are all on timers separate from their primary attack. Reinhardt’s charge, for instance, can only be performed once every ten seconds. Mastering a character requires learning when to use each ability to its maximum effect, with the knowledge that if you mess it up, you won’t be able to use it again right away. 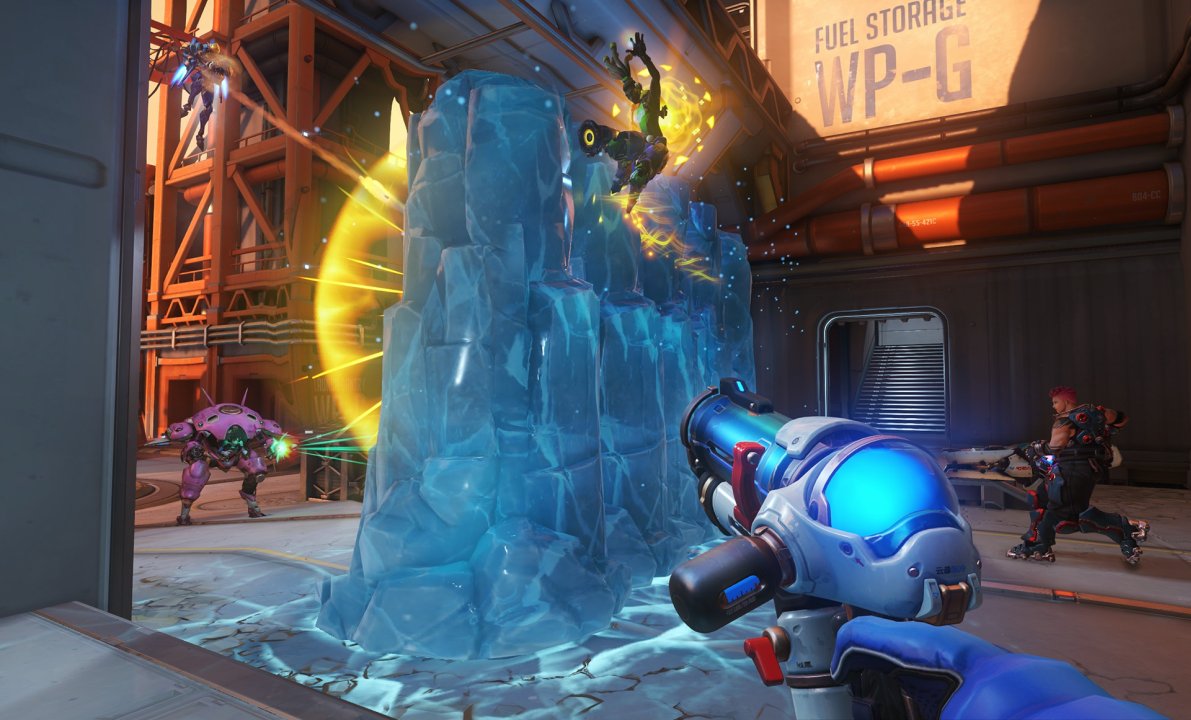 On top of these timer-based abilities, which have a regular cool-down period that doesn’t change, each character has a potentially game-changing ultimate ability. This ability charges up based on player performance. A player who performs their role effectively will have their ability charge up more quickly. This could mean doing more healing as a support character, soaking up damage as a tank or eliminating enemies (you don’t “kill” people in Overwatch) as an offensive player.

These ultimate abilities vary greatly in nature and can turn the tide of battle, especially if used together. Zarya, a Tank character, launches an orb that sucks surrounding foes in, while Junkrat, the grenade launching nutter mentioned previously, sends a remote-controlled wheel of death that can be detonated to kill everyone nearby. These abilities are useful in isolation, but devastating when used in combination. These super-abilities add an unpredictable layer to the gameplay and can make for some frantic moments towards the end of some matches as both teams use ultimates they have been saving in a final effort for victory.

While you can’t customize the loadout of your heroes, you can unlock custom skins, voice lines and actions. Every time you level up in Overwatch, you unlock a loot crate which contains a handful of random items. Items have rarity tiers with more common items representing relatively minor changes in the case of skins while rarer skins can dramatically alter the appearance of a character. It is possible to buy loot crates as well via in-game micro transactions, which feels a bit cheesy since this is already a full priced game, and buying loot crates does not guarantee you will get good items.

As mentioned previously, the game modes are tied to the maps, of which there are roughly a dozen. The maps span different global locations, and are typically well designed with a mix of bottlenecks and more open areas that let all of the different classes shine. A couple of levels with particularly nasty bottlenecks seem to favor the defenders a bit too heavily, but overall, the maps are a joy to play and are nicely varied in terms of visual style. 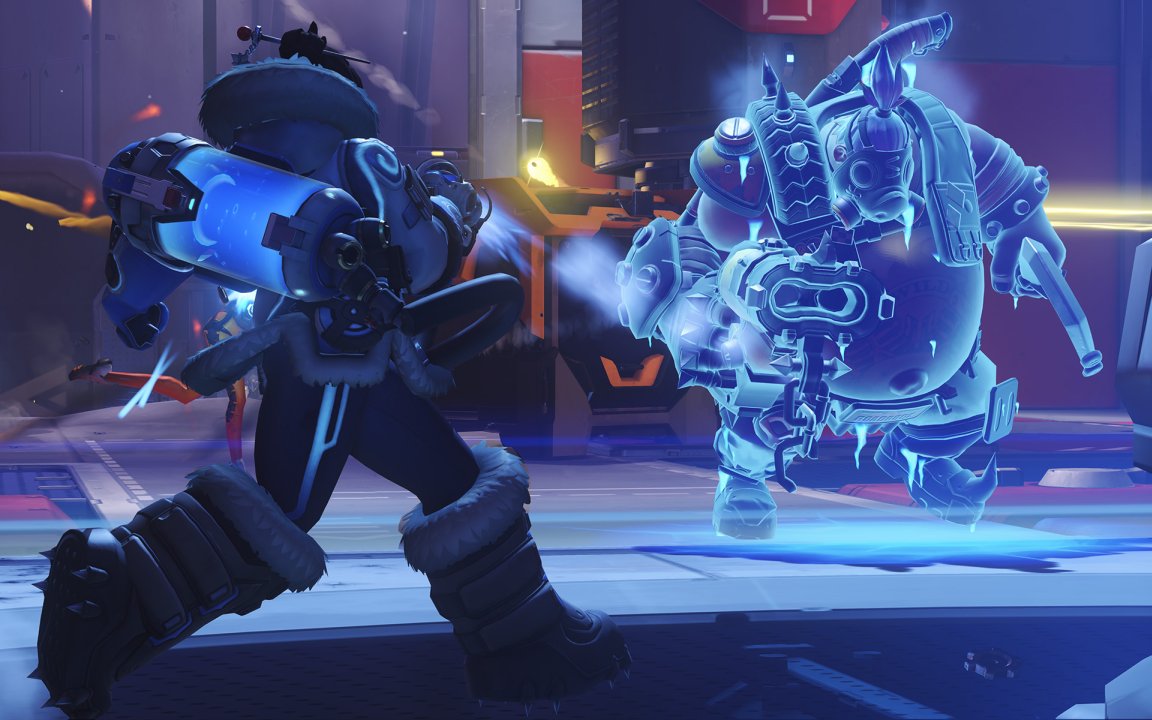 There are two primary way in which you will experience these central maps and modes; through casual and competitive play. Casual matches are loosely based on your player rank, and to me is the better way to experience the game. Overwatch is at its best when not taken too seriously, experimenting with different classes and class combinations within a team. Seeing what happens when you stack five Winstons can be hilarious and dealing with these unexpected team combinations makes for some great frantic moments when on the other side of them. Casual games also end quickly; each round consists of a single offensive or defensive leg and will typically conclude in 10-20 minutes which feels perfect.

Competitive play, while functional, feels like it goes against the light, fun nature of the game. I found myself sticking to a select few characters I felt comfortable playing with and knew would contribute to my team’s success rather than experimenting with new characters and strategies. Experimenting with different combinations of the twenty-two characters is where Overwatch is at its best, and competitive play undermines this aspect completely, resulting in a mode that is significantly more tedious and less joyous that what is found in casual play. Competitive matches also tend to drag on much longer as both teams will attack and defend, and in the case of a tie, a third overtime-round extends things even further.

Competitive play also highlights the more aggravating aspects of Overwatch, especially when playing with strangers. Many of the classes serve as soft counters to others, and having teammates who are unwilling to switch classes mid-match to deal with changing conditions can be quite frustrating. In competitive play this problem is compounded by the fact that there is a one-character limit per team, so you might get into a situation where the best counter to an enemy strategy is being played ineffectively by someone unwilling to switch. As you might imagine, this leads to some unhappy players and unpleasant exchanges in chat.

There is also the potential for cheesy tactics to emerge given the massive pool of classes and maps; for instance, the Lucio character can ‘bounce’ enemies, and on some maps with large fatal drops close to the objective, this ability can be abused. Any multiplayer game can become frustrating, but I found myself becoming agitated rather frequently with Overwatch’s competitive mode. Some questionable hit boxes can also lead to annoyance as characters like Hanzo can register hits on what look like near misses, leading to rare situations where kill-cams reveal deaths that occur when a hit is registered on your character when you appear to be fully behind cover. Of course, much this frustration can be mitigated by playing with friends, which is absolutely the best way to experience this game. 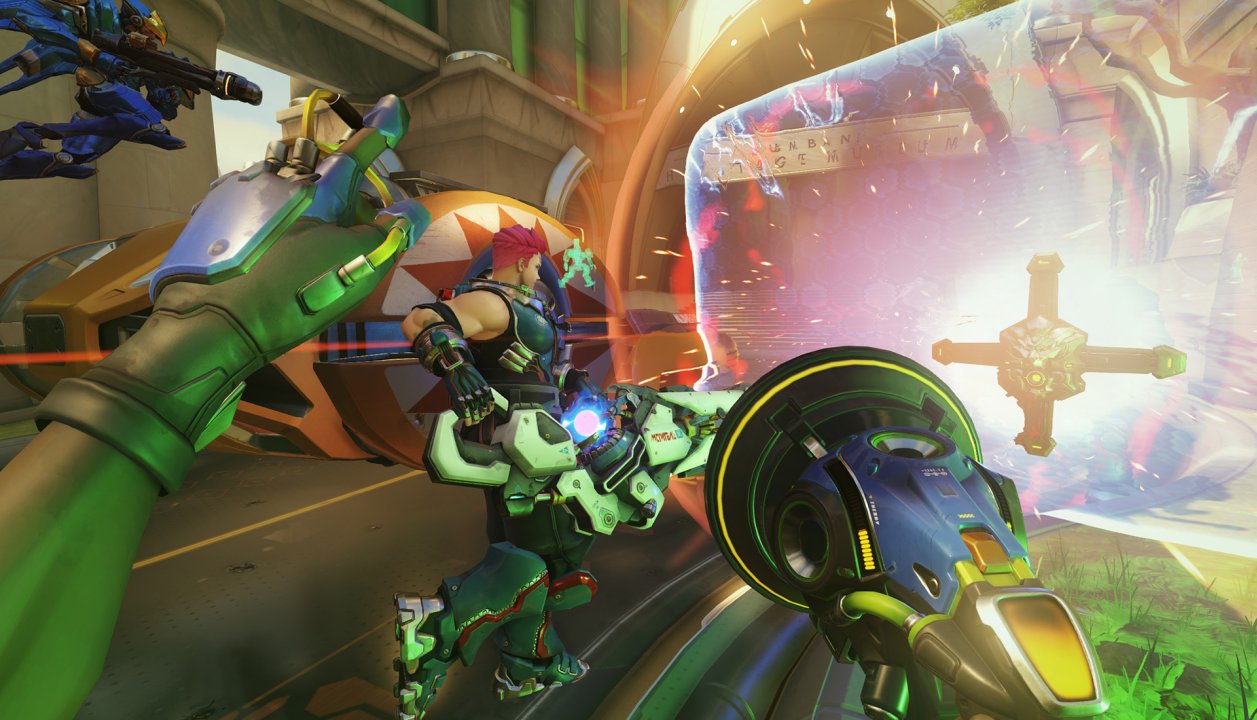 Outside of the two primary game modes is a rotating ‘brawl’ mode which typically highlights a few of the characters, or has some silly alteration to the core rules like double health. This mode is a worthy distraction and also encourages playing as characters you might normally avoid. You can also train against AI, another useful way to sharpen your skills or learn a new character, though Overwatch is very much a multiplayer-focused game.

While Overwatch’s art style is vaguely cartoonish, it isn’t quite cell shaded, but rather more vibrant and colorful with bold character designs and distinct visual flourishes given to the different environments, underlining the fun, light tone of the game. There is a good amount of detail present in the maps, and the game also runs extremely well. Audio is also strong, with distinctive sound ques playing right before a character pops their ultimate ability. Weapon sounds could stand to be a bit punchier, but an additional sound that plays when you eliminate an opponent help makes up for this. The music swells at important moments and adds to the excitement of close matches effectively.

Given that Blizzard have never really made a first person game before, their first attempt with Overwatch is indeed an impressive one. With the promise of free content updates and a massive community already entrenched, this game is here to stay. While there are still some kinks to be worked out in the competitive scene, the breadth of play styles present and the amount of fun that comes from combining different character abilities means this is a game I will likely be returning to over the next several years. If you’ve been looking to fill the hole that TF2 left (assuming you aren’t still playing it), look no further; Overwatch should do brilliantly.

All videos for Overwatch (4)
Advertisement ▼