I Am Setsuna Review

A serene game that's easy to enjoy for JRPG fans

The JRPG genre has not aged all that well in recent generations. While Japanese studios have tried to keep pace with the photorealism of modern games, the uncanny valley of the JRPG has been put on full display. The games that have had the most success have attempted to capture an anime aesthetic (Valkyria Chronicles, Ni No Kuni) or have been re-releases of classics (Suikoden II, Chrono Trigger). That brings me to I am Setsuna. While the game inherits plenty of frustrations from the old-school JRPG genre, it also delivers a simpler package that comes together in impressive fashion. I am Setsuna does this by honing in on the characters, connecting players to weirdly named sprites and making you care about what happens to them on their fateful heroes' journey. 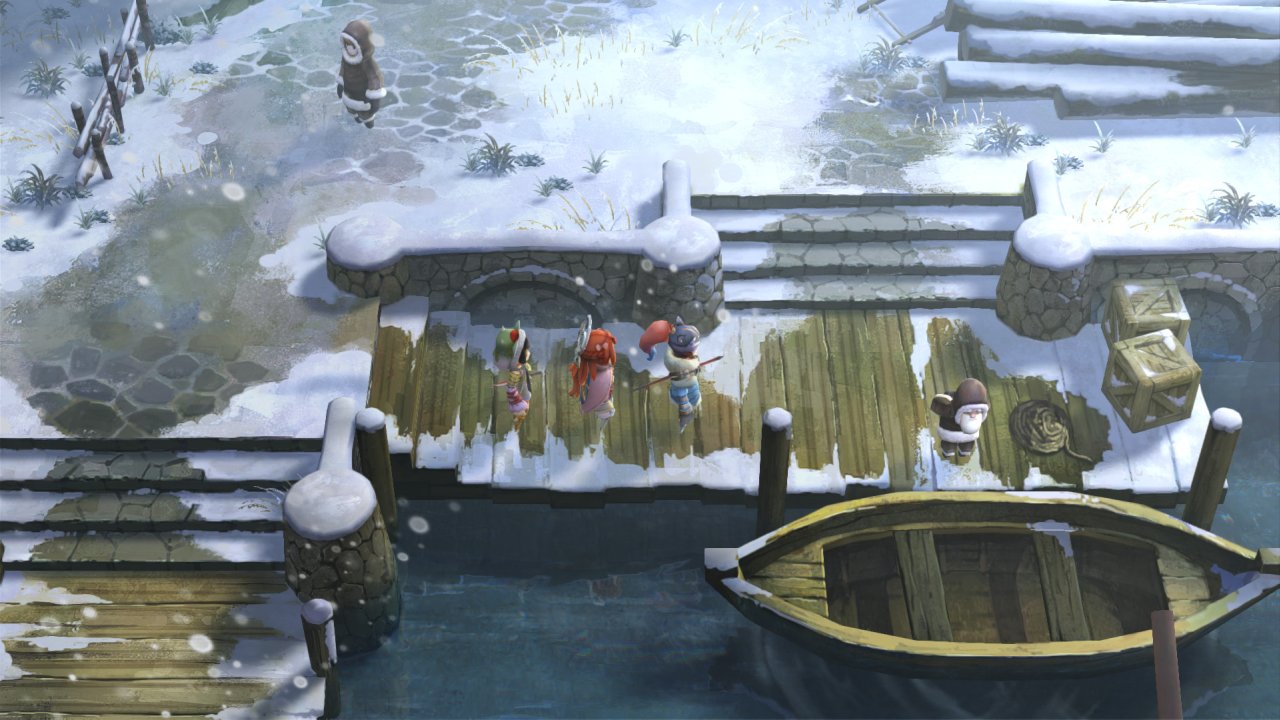 I am Setsuna is just a-burstin’ with the tropes that make the JRPG genre tired for so many and so loveable for others. It has the silent anti-hero protagonist, the oh-so-pure heroine, the action girl, the shamed soldier, the over-zealous youngster, the troubled leader. They’re all walking/talking tropes and the writing doesn’t help them break the mold. The player character, Endir, spends his time grunting his answers, revealing himself to be an alright guy at the end (the speed of the arch depends upon player-dialogue choices, but it gets there regardless). Setsuna spends the whole game being so holier-than-thou, sometimes you want to throw her off a cliff (and you have ample opportunity). The fallen Captain Queen, Julienne, always takes the morally challenging path as she is beset by dark force overtaking her. The characters are so one-note, that anything out of ordinary clearly shows they’re being controlled by an outside entity (and that happens quite a bit) .

Yet, one could argue that these digital clichés do service to the plot. We don’t spend a lot of time wondering, “what’s that guy’s deal?” because we knew their deal from the second they entered the frame. We’re never unsure of a character’s motivation or their intention because it’s plastered all over of them. We always know Setsuna is trying to do what is right, we always know Nidr (shamed soldier) is trying to make up for his sins of the past, we always know Kir (over-zealous youngster) is going to take crazy risks to show his headstrong attitude. The predictability of the characters allow us to brush past them and see to the tendrils of a story that they are wrapped in.

While the characters might not have a lot of depth, the same can’t be said for the plot. It’s not that I am Setsuna wows you constantly with action and game-changing twists. In fact, it’s fairly straightforward. Yet, at the same time it provides plenty of moments worth contemplation. 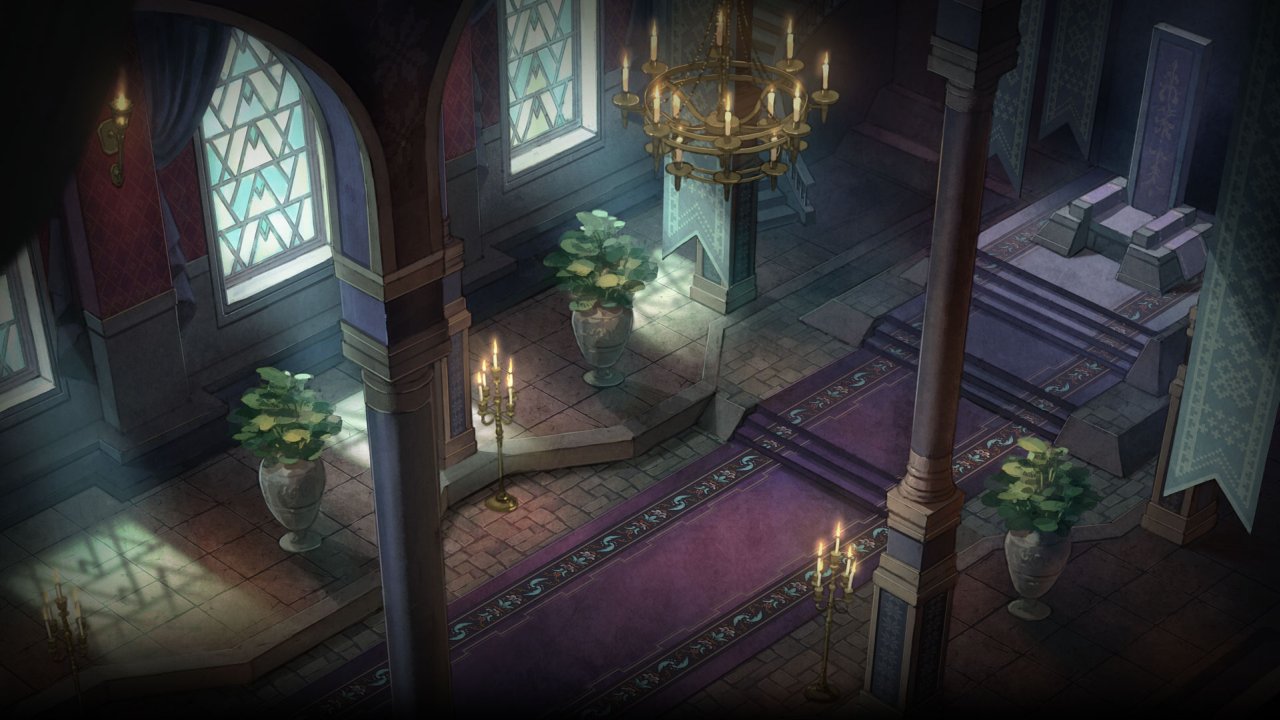 Players assume the role of Endir, a mercenary who wears a mask because it’s cool (this is a JRPG after all). Endir is given an assignment to kill a girl on an island to the north. He travels to said island and meets Setsuna, the girl he is supposed to kill. Things change when Endir is told that Setsuna is the Sacrifice, a girl who travels to a place called The Last Lands and is given to the monsters of the world in order to maintain the truce between people and monsters. Endir decides to escort Setsuna to the end of this task, mostly because Setsuna asks very nicely (it’s almost like asking nicely is her superpower) .

Immediately you have interesting dynamics at play. Endir’s journey of guiding Setsuna to her inevitable death begs the question of what death means. When Nidr joins the party he brings the question of whether or not redemption is possible. When Julienne sacrifices knights, we ponder if her people have actually lost any honor in their fallen state. Each character’s story is told in straightforward fashion, but comes with queries that are worthy of your time.

On top of the conundrums facing the individual characters, it seems every NPC you meet along the way has some opinions about the role of the Sacrifice. These questions make for a thoughtful experience. On top of all of that, the game paints a mysterious and strange finish ahead as players travel to The Last Lands. The largest question that pushes players forward is if Setsuna will actually give her life at the end of the quest. Although her fate seems so determined, it’s worth pushing forward to see if it is as simple as it appears. 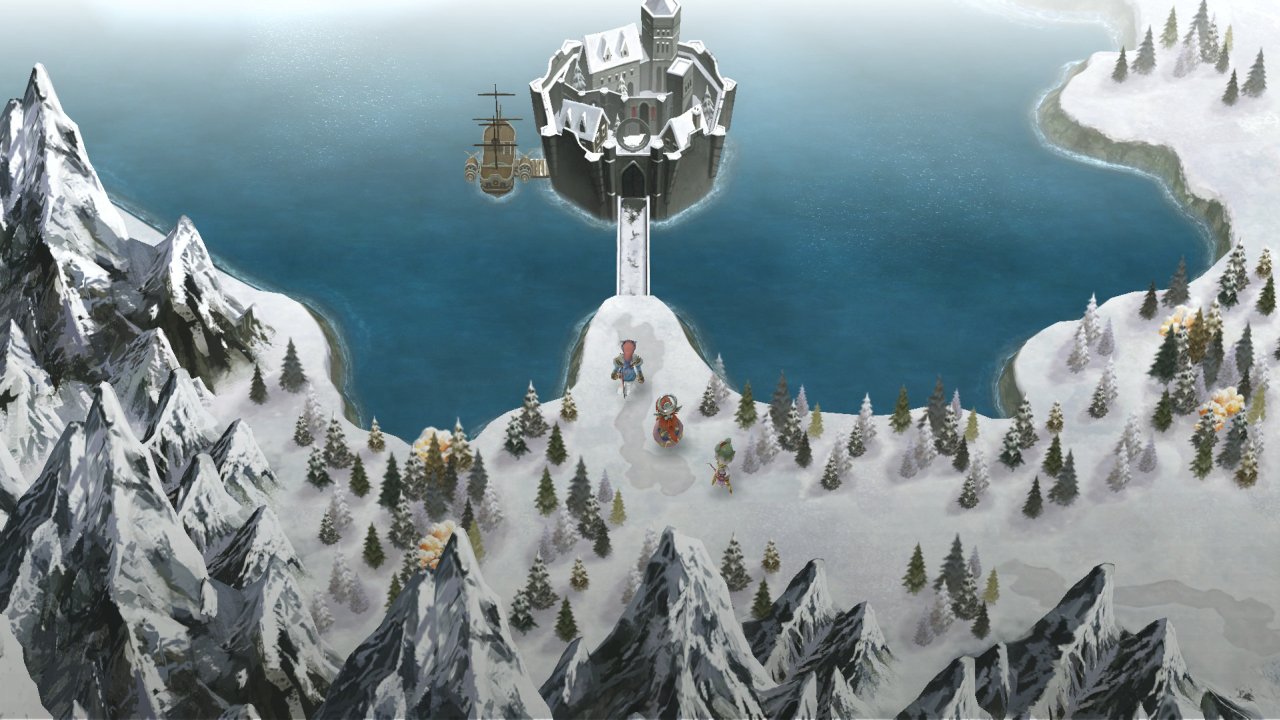 As far as gameplay goes, I am Setsuna is a rather standard JRPG, obviously influenced by games of the past (see: Chrono Trigger). Each character is given a meter that determines the turn order and once the meter is full the player can give commands to the party. This can make for a bit of a rush as players try to hurry their command so as to not waste time. Each character has their own HP and MP meters, and there’s the usual item and skill management that you’d find in any JRPG.

Players journey from location to location using an overworld map - each location is either a dungeon where you’ll run into enemies or a town where you can stock up on supplies. For large swaths of the game, I am Setsuna is well-balanced. There are some serious difficulty spikes with certain fights, but many encounters can be avoided by escaping or are completely optional. It is still a little off-putting when you’re cruising through a dungeon and run into a nastily overpowered enemy. 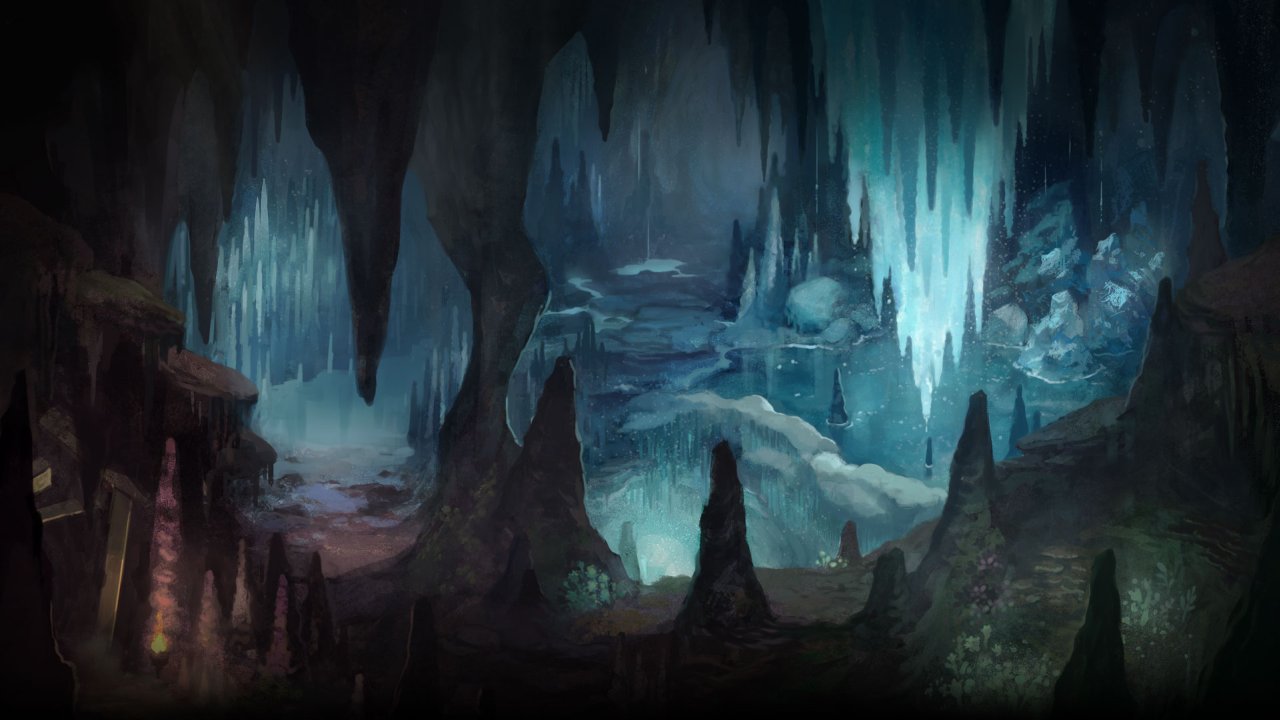 The items and inventory in I am Setsuna are fairly simple. Players buy weapons for characters and can upgrade them with reinforcement materials. You can also buy items which enhance different stats, but characters can only wear one item at a time. All of this is well organized and simple to use - though the healing items were a little confusing and a couple times I ended up without items I thought that I had due to a mix up with information presented by the shopkeepers.

This is a bit of theme that runs throughout I am Setsuna. Some unintuitive design choices can make for some frustrating moments. There’s no autosave and while you can save at anytime in the overworld, you have to find save points in dungeons. Perhaps the most annoying part is that you can’t save in towns. This means you’ll spend a lot of time setting up your inventory and managing your characters, then forget to save in the overworld, finish the front half of a dungeon and suddenly realize you’re playing with fire. The simple solution here is to never forget to save in the overworld, but I don’t think I am Setsuna would have betrayed its old-school JRPG roots with a modern autosave system that prevents headaches like this.

Perhaps a bigger problem for I am Setsuna is that its aesthetic, though beautiful at first, runs out of goodwill. The snowy landscapes and icy cave floors are interesting for a while, but as you hit the 10-15 hour mark, the recycled assets become a bit obvious. The houses, towns, and dungeons all run together in my mind as I struggle to recall them. Even worse is when the game asks you to start backtracking to places you’ve already seen before. At that point the game no longer feels like deja vu, it literally is deja vu. I would have loved to write more about the charming animations that harken back to old PS1 days, but they are overshadowed by how similar everything looks. Even the weird other-worldly dungeons all look like each other. Had the game been about five hours shorter, it might have worked, but the extended playtime begs for variety. 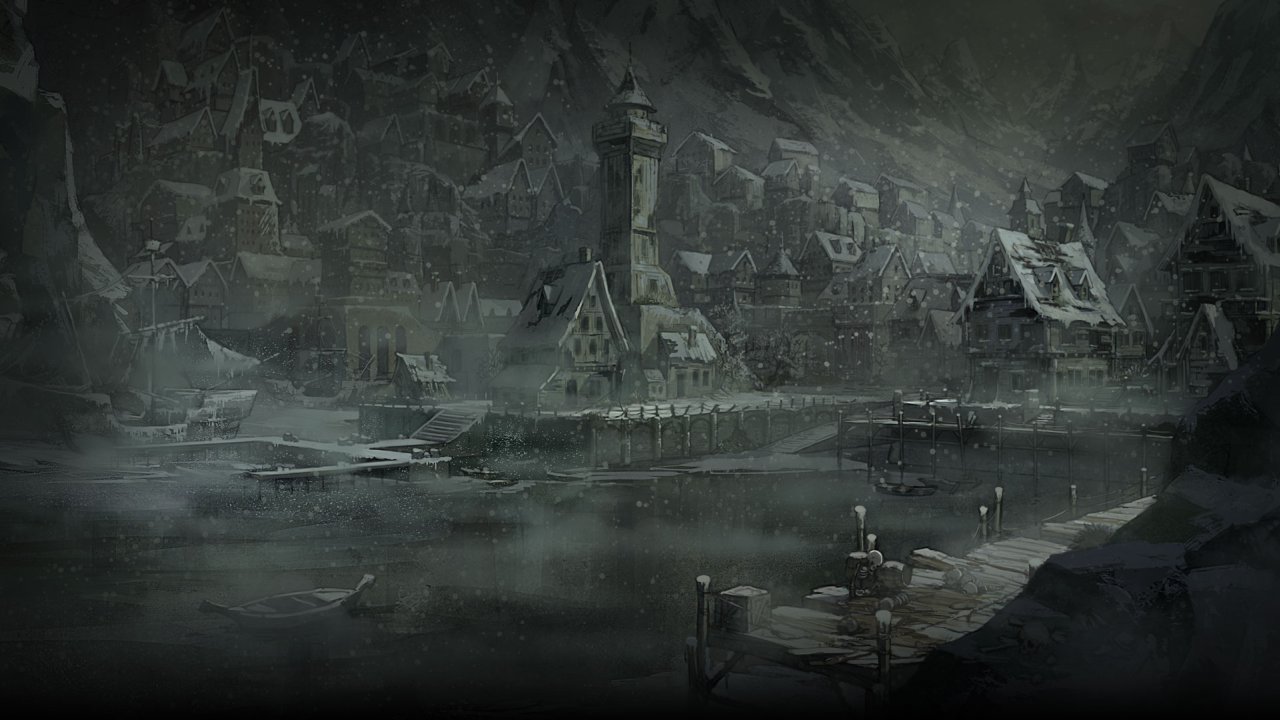 Technically, I am Setsuna is a sound game. It loads and saves quickly, the only crashes I had were when I left the game idle for extended periods of time. The game obviously isn’t going to tax your machine, but it is also should be commended for being such a smooth experience.

One place where I am Setsuna really surprises is its piano-centric score. I thought that trading in the sweeping themes commonly found in JRPGs for the much-subdued piano would make I am Setsuna feel cheap - and sure I’m not going to cue up the battle themes any time soon - but it’s impossible to ignore the beautiful themes that accent the quiet moments spent reflecting on the previously mentioned story elements. I am Setsuna is a peaceful JRPG that wants you to consider it as you play, and the wonderful music makes that possible.

I really liked I am Setsuna. I found myself frustrated with its old (possibly even outdated) mechanics at times, but that doesn’t distract from the quietly serene game that Tokyo RPG Factory has built here. The core of the gameplay is solid, the questions raised by the characters in relation to the plot are worth considering, and even if you don’t have deep roots in the genre you’re likely to get something out of this great little game.

Our ratings for I Am Setsuna on PC out of 100 (Ratings FAQ)
Presentation
73
Some repetitive aesthetics are made tolerable by a lovely piano score.
Gameplay
81
I am Setsuna is largely well balanced, though there are oddly overpowered enemies interjected at weird times.
Single Player
82
The game raises interesting questions that keep you engaged throughout, even if its characters are clichés.
Multiplayer
NR
None
Performance
(Show PC Specs)
CPU: Intel Core i5-3570K
GPU: Nvidia GeForce GTX 660
RAM: 8GB
OS: Windows 10 Home 64 bit

80
There's nothing flashy about I am Setsuna, but it runs smoothly and without many issues.
Overall
80
I am Setsuna may not blow you away - it’s simple and understated, but there’s a lot of charm in that. This quiet JRPG is a solicitous throwback that makes its case through thoughtful moments instead of flashy cutscenes. 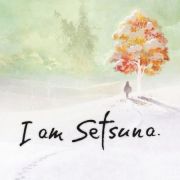