With the gaming scene brimming with increasingly complex games, Brainy Studio’s quirky little indie title, TurnOn, reminds us that sometimes less is more. And they seem to go above and beyond to try and prove this point, perhaps at times to a fault. Turning the platforming genre on its head, while capturing some of the essence of the genre’s notoriety for simplicity, TurnOn manages to stand out with its distinct style, while offering an overall fun experience with a simple learning curve. At the same time, the game perhaps relies a little too much on its simplistic, albeit unique, gameplay mechanics, rather than building on its spark of innovation with real depth or variety of gameplay; almost to the point of making the novel concept begin to feel somewhat repetitive after prolonged playthroughs. The potential is there, and while there are definitely moments where the game shines bright, there seemed to be just as many instances where my experience fell a little flat. 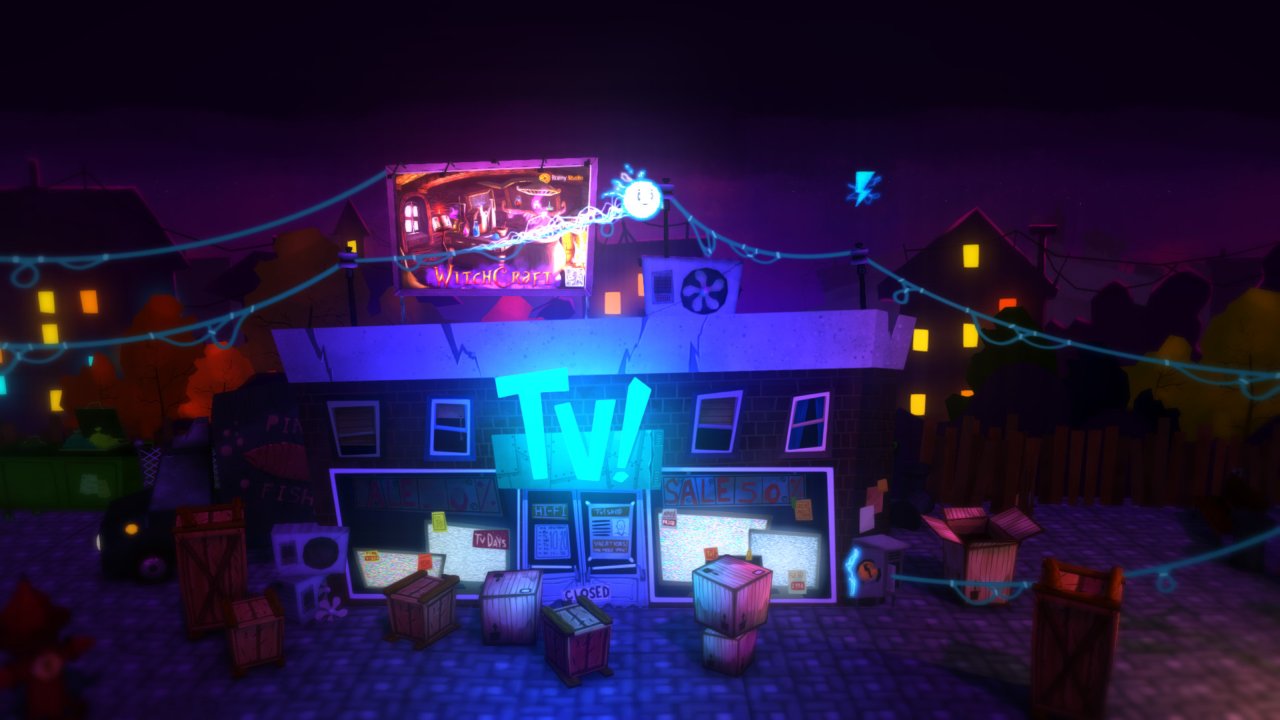 Unlike most of its brethren, TurnOn holds the distinction of being a platformer without platforms, and provides an interesting overall premise to boot. You control an ambiguous alien-like being which takes the form of an electric spark named Turnon. With the help of a stereotypical geeky mad scientist, you set out with your cute little electric bundle of joy on a series of missions to help restore electricity to a darkened city brimming with inhabitants who are distraught and helpless from the loss of their precious electricity.

As you are essentially an orb of concentrated electricity, power lines are, quite naturally, your primary means of transportation, in addition to occasional electric currents; both of which act as the replacement for your typical platforms. This means that your movement is essentially limited to shifting one of four directions as you glide across jumbles of wiring which are spread liberally across the city. This concept provides the backbone of the gameplay, and instantly allows for a gaming experience that is simple to jump right into. The title as a whole proves to be quite straightforward, figuratively and literally speaking. The game was clearly meant to be welcoming to the more casual gamer, as there are few real dangers and little at stake. There are also plenty of checkpoints (which cleverly come in the form of fuseboxes which you activate upon touching) throughout each mission, ensuring you are never too inconvenienced.

Your main goals in most of the stages are to trigger various events by merely touching them with your electrically-juiced body. Brainy Studio cleverly and seamlessly fuses the gameplay with the narrative here, as you frequently follow minor character stories by aiding them with your electricity, prompting them to engage in amusing little actions as they achieve their goals. You will often be forced, or at least encouraged, to power various buildings, vehicles, and equipment to help people go about their day. Some of these more elaborate events include lighting pathways to help a little girl find her way home, clearing roads so that separated lovers can meet each other at a local cafe, and even rescue several frightened people stranded on a broken down Ferris wheel by restoring power. Some of these events are minor side-ventures, while others are integral to progressing and finishing the level itself. In this sense, TurnOn provides a feeling of being involved with a narrative and provides at least a subtle sense of interaction, which is difficult to achieve with such a simple game. 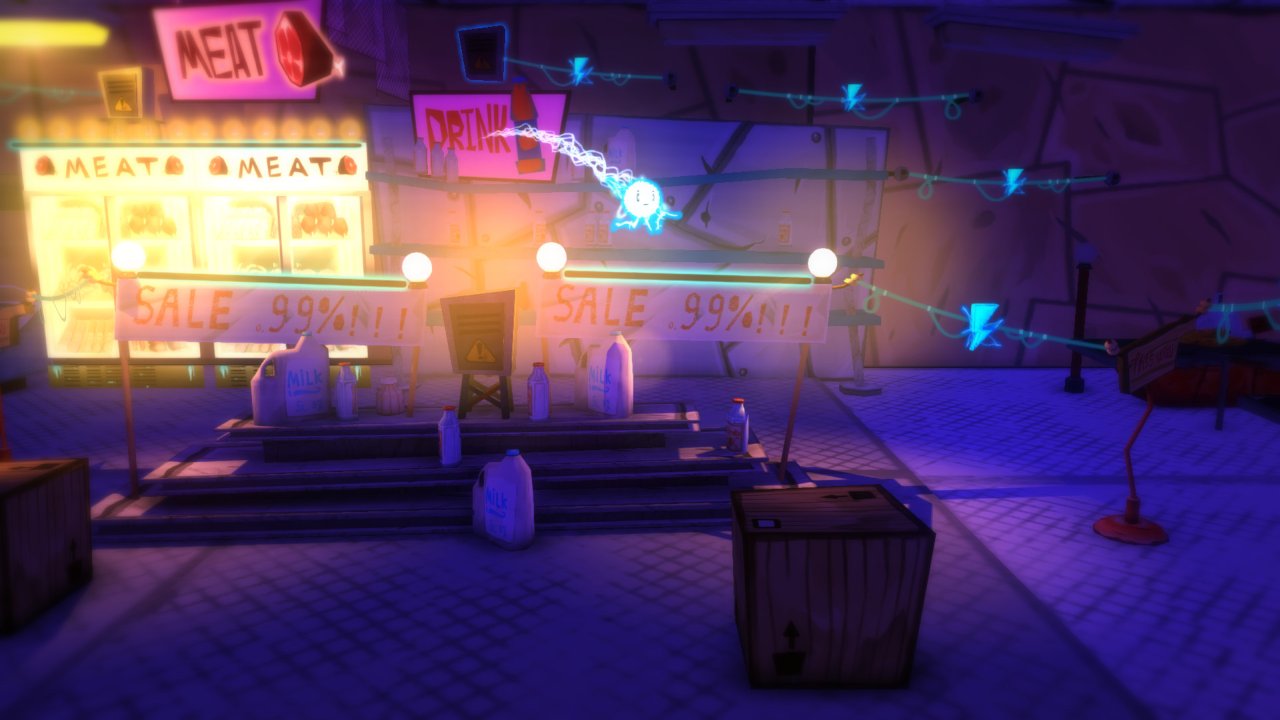 Despite the ability to play around with these minor objectives scattered about, complete with many diverging paths, many of the stages can still be completed relatively quickly. You can certainly drive up the amount of time it takes to burn through this otherwise brief experience if you happen to be a perfectionist, as the game also provides a hefty dose of collectables which can be found all over the city, coming in the form of blue lightning bolts. Additionally, you can gain quick points by turning on lights, and generate power to various items that require electricity such as fans. From a practical standpoint, these achieve nothing aside from building your rank which is presented to you following each completed mission, ranging from one to three “lights.” While essentially meaningless, they act as a sort of minor incentive for the player to return to previously visited stages and inject a bit of replay value to a game which doesn’t exactly entice multiple playthroughs with its simplistic approach.

Though these various items and points of interest help add some meat to the gameplay, they can also present some frustration at times, as most of the stages consist of multiple layers of wires, each with their own set of goodies. This leads to inevitable backtracking if you prefer to leave no stone unturned, or even if you simply have trouble finding the next story event, which is not always particularly apparent. On top of this, the game also utilizes a sort of 2.5D system of placing paths in the foreground and background, which most stages take advantage of to one degree or another. While offering a neat new dimension (pun intended) to TurnOn’s flat terrain, they can be a bit jarring at times. This disjointedness is further emphasized by the strange inconsistency of the character’s perspective size not changing to coincide with his transporting onto the foreground or background. It is perhaps a minor nitpick, but it does really break some of the immersion the game provides. There is also the occasional issue of power lines being placed offscreen (either in the foreground or off to the side) which you are sometimes unable to even see unless you take a misguided leap of faith towards a potential early demise. For a game that utilizes these wires as the primary means of movement, making them a bit more visible could have proven to be a subtle yet meaningful improvement.

TurnOn also mixes things up a bit with some less frequent on-rails stages that feel a bit like those intense mine cart levels in the Donkey Kong Country series. Unlike the main missions which emphasize exploration and subtle puzzle elements, these stages crank up the pace and focus on action and fast reaction times. The game’s music takes center stage here, as the rhythms more-or-less dictate the timing of when you should jump or drop to avoid obstacles. During these stages, you are forced to glide constantly onwards as you maneuver to avoid pitfalls and enemies which come in the form of red lightning bolts. Despite the further simplified controls in these segments, ironically I often found them more difficult than the main stages, as one wrong move can send you plummeting to a swift death. The controls can be somewhat unresponsive which become especially apparent during these instances. I’ve run into more than a few instances of sliding off the edge of a power line despite seemingly hitting the jump key in time. 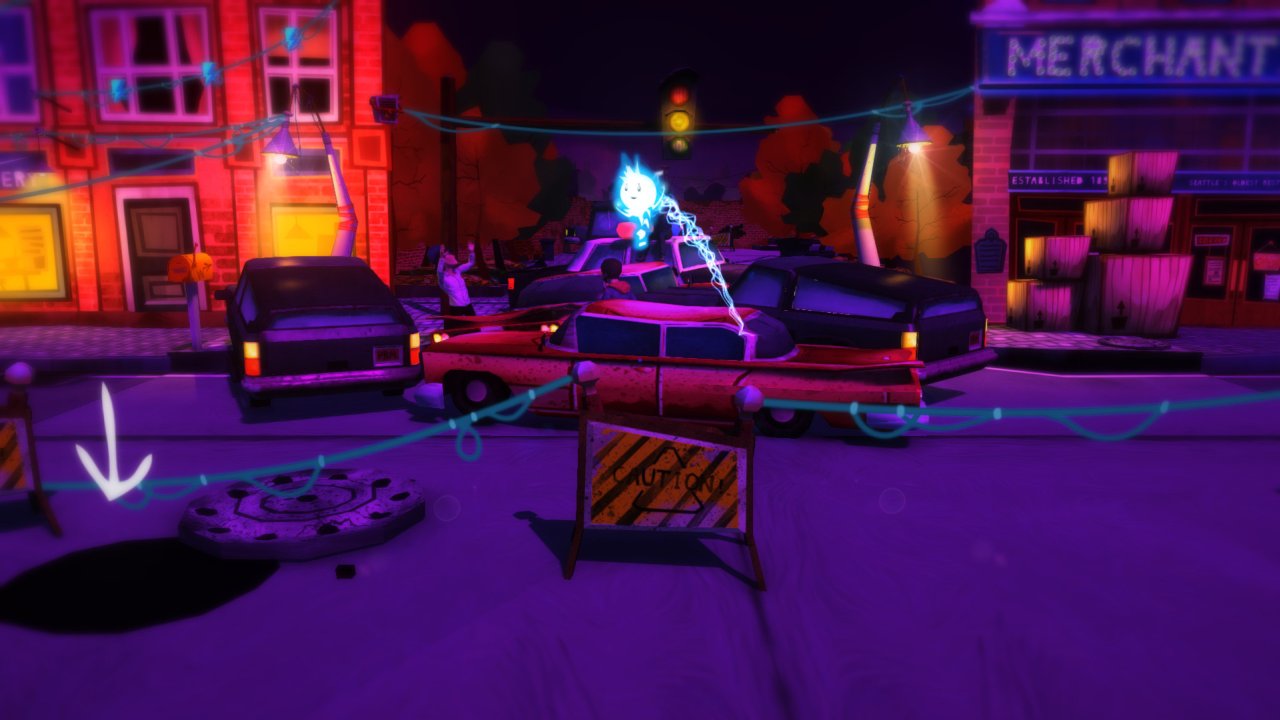 As a whole though, these action-based musical missions offered a welcome change of pace and were fun to play for the most part. After playing these unique stages though, I couldn’t help but yearn to play a third or even fourth variant on the unique platforming style TurnOn establishes. There is a relative lack of variation and depth which becomes more apparent the more you press on, and feels like a bit of a missed opportunity for the otherwise interesting concept the game presents. And aside from a few levels that throw you some curve balls (like trying to take out a drone, or scramble up a skyscraper before a current of electricity wipes you out), the game more or less sticks to this rigid formula of puzzle-focused collectathons, with some action-oriented jumping stages thrown in. Boss stages could have been interesting, or at the very least, some more elaborate missions that included more enemies or obstacles to avoid while you zip your way to the goal.

This isn’t to say that the game does much wrong with the content it does provide. It actually does a pretty good job of achieving what it sets out to accomplish - serving as a unique platformer with a mellow style that is sure to provide you some enjoyment in small doses. But by the same token, the game seems to play it safe whilst not fully utilizing its own strengths, and this flaw is further illuminated by some repetition and lack of content. I also didn’t typically feel challenged throughout my electrically charged journey, and, with the frequency of checkpoints and lack of enemies, was able to breeze to the end with relative ease. I suppose it is meant to be an easygoing experience, which is exemplified in part by its cutesy, simplistic graphic style and its soothing piano melodies. Those looking for a more fleshed-out and challenging platforming experience will not find it here. At the end of the day, TurnOn feels like an interesting concept which, despite some shining moments of fun, left me wanting a bit more overall.

Our ratings for TurnOn on PC out of 100 (Ratings FAQ)
Presentation
75
Emphasizes a cartoony and easy-going charm, and pulls it off rather well. The serenading piano and string-based melodies compliment the relaxing style of the gameplay.
Gameplay
61
Fun and interesting at first, though it becomes a bit repetitive and slow paced. Though the action-oriented musical levels help to balance things out, they also are punctuated by controls that could be a little more responsive.
Single Player
74
The game is on the short side, though if your goal is to earn collectables and points to bring up your rank, the experience becomes somewhat lengthier and more fleshed out. The narrative boils down to brief but enjoyable comic book-style cutscenes and creative interactions with characters.
Multiplayer
NR
None
Performance
80
The PC version was stable and ran smoothly for the most part.
Overall
68
TurnOn is definitely a neat idea on paper, and though it does some things well, it leaves a bit to be desired at times. Tough to recommend at full price, but fans of platformers, and those who just want a relaxing gaming experience, are likely to get some enjoyment out of it. 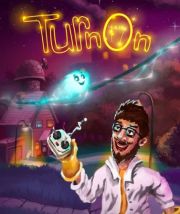