Assassin?s Creed II corrects nearly all the problems of its predecessor, transports players to a beautifully realized Renaissance Italy, and results in one of the best games of 2009.

Ubisoft’s Assassin’s Creed landed back in 2007 with staggeringly mixed reviews. For some, the game’s scope, story, and ultimate vision were more than enough to forgive it the shallow and formulaic game play, while the same wasn’t true for others who found the game simply too monotonous for them to enjoy. So as Assassin’s Creed II descends on the 2009 holiday season, we’ve got to ask: Is it the same old game with new environments or something far beyond the game play and story of the original?.

The first Assassin’s Creed remains as one of the most gorgeous and well presented titles of the current console generation and the same is true here. From the busy waterways of Venice to the scaffolding of the Sistine Chapel, everything in Assassin’s Creed II looks both beautiful and historically accurate. The city is visually stunning and rich with activity. Crowds mill about in front of shops, gondoliers travel from place to place, minstrels mill about singing, and workers wash newly constructed walls and streets. The team over at Ubisoft Montreal truly upped the visuals from Assassin’s Creed to make renaissance Italy truly a sight to behold. The UI and menu system retains the sleek sci-fi feel of the original, looking just as great here as it did there. For the true gaming purists out there, there’s even the option of disabling the entirety of the HUD and playing the game in Italian without subtitles. Now that’s immersion. All of this being said, the game’s only graphically lacking moments are mostly found in the cut scenes, particularly those early on in the game, where the details and intricacies of the city are lost to the dull textures and facial features of characters. Still though, this is a small complaint in an otherwise beautiful game. 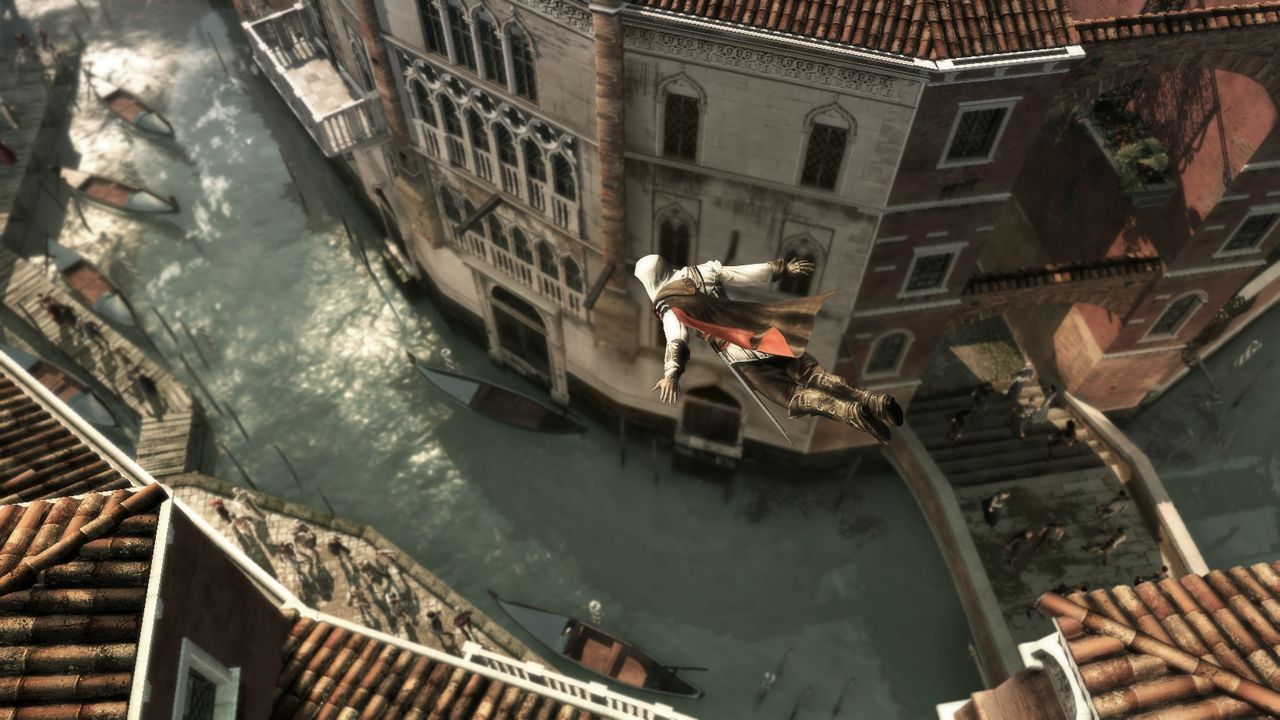 One of the biggest flaws of the first Assassin’s Creed was the shallowness of the missions and a huge lack of variety, especially as the game progressed. Luckily, Assassin’s Creed II has had this problem corrected and compensated for in spades. Where the first game had players doing three smaller missions before a large assassination and then repeating this same formula for each assassination in the game, Ezio is subject to a much more organic and well-paced single player experience that feels much more like a movie than a repeating formula. Weapons, special attacks, and new cities are opened as the story progresses rather than simply finding everything open to you in the beginning and wishing for more and better equipment as was the case with the first title. Every assassination can be taken on from several different angles whether you prefer to simply tear your way through the guards, run down your target, slip a blade into him amidst a crowd, or even sneak your way to a well-positioned rooftop and executing an air assassination. Retaining the unique counter and disarm combat system of the first, a ton of depth has been added to both the assassinations and the open combat that Ezio takes part in. With a slew of weapons available for purchase many with unique attacks and combat animations and advanced combat techniques available to be unlocked, the fighting remains fun, exciting, and interesting throughout the single player campaign.

One of the most underrated aspects of this title in the lead up to its release was Ezio’s inheritance of a family villa and surrounding town that can be invested in, upgraded, and renovated in such a way that not only visually transforms the city and its citizens but grants the player new and exciting game play benefits. Acting as your base of operations, the villa gives the player a portion of the game world to call their own and to fill with the components gathered throughout the main quest. Compared to the simple and ultimately useless 100 flags of the first game, the villa plus the inclusion of a large number of collectible granting not only achievements but also additional game play and story benefits gives Assassin’s Creed II some serious legs over its predecessor. 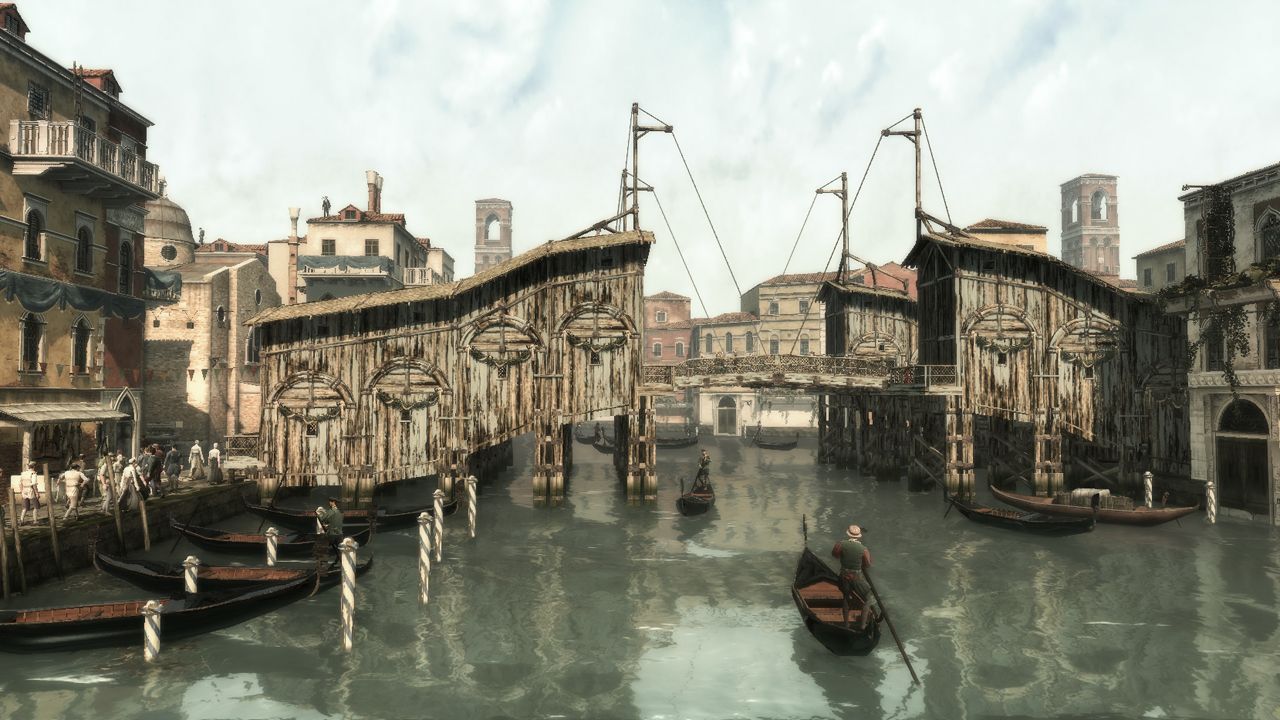 Looking purely at story and the single player experience, Assassin’s Creed II retains the sci-fi overstory of the first while building an intricate and well thought out story in renaissance Italy. I am going to refrain from giving any substantial summary of the game’s events as evening the opening of the game is a spoiler for the first title and some events taking place just minutes into the game as something that many players wouldn’t want spoiled. That being said, the struggles between assassins and the knights templar that began in the first game is continued here. The story brings historical characters like Leonardo Da Vinci into the picture while delving the player in renaissance politics and power struggles that tend to be considerably less cut and dry than the assassination’s faced by Altair who were clearly evil from the get go. Although mention of politics may not excite many players out there, don’t be confused. This is a game purely about action and, for Ezio, revenge.

Desmond and the 2012 timeline make appearances at three logical and welcomed points throughout the game, removing the constant back-and-forth created in the first title where the player would have to shuffle around mostly empty rooms as Desmond between each assassination. Desmond is beginning to feel much more like a fully fleshed out character and only appears at times when it fits the story and there is something exciting or substantial taking place. This story structure keeps the player immersed and ultimately makes both Ezio and Desmond matter considerably more they would have in the first gam.

From a performance standpoint, the game shines. Regardless of what’s on screen whether that is a huge unit of guards or the intricate alleyways Ezio often speeds through amidst an escape, the game keeps the frame rate high and smooth. I can’t recall running into bugs of any sort, although I heard tale of a very specific but nearly game breaking bug found at launch that has since been patched. One that did stand out was the pop-in which is the game’s only flaw performance wise but can be quite noticeable at points. That being said, it isn’t nearly as bad as graphically similar titles like Mass Effect where you would find yourself stopping for a few moments as the room loaded in. For the sake of this review, I played the game on the 360 but I have heard that the PS3 version of the game tends to not be as graphically impressive and suffers from some frame rate and pop-in issues that the 360 does not which is unfortunate. 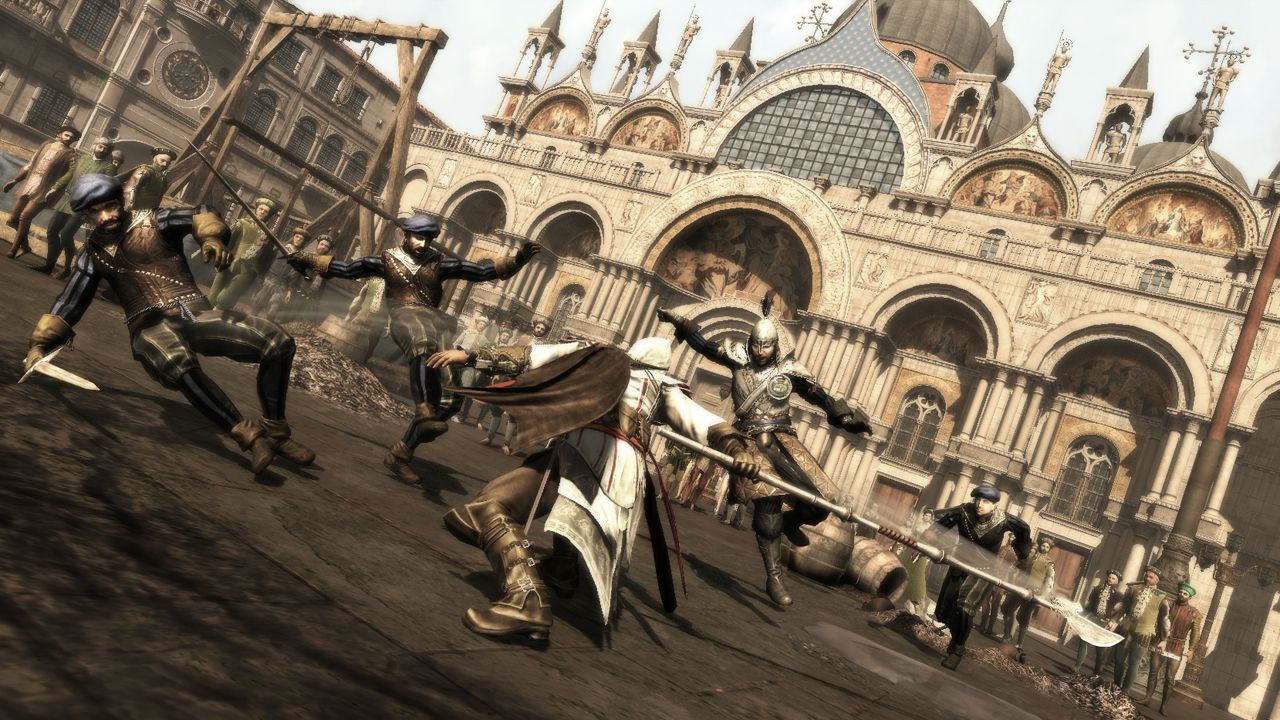 Overall, Assassin’s Creed II retains all of the great aspect from the first title (the story, graphics, environments, and core gameplay) and adds everything that was missing (varied missions, combat complexity, and considerably more content). This game is clearly the vision that Ubisoft Montreal was shooting for with the first game in the series and as such will reinvigorate those who loved the first game while also giving its naysayers a reason to give this game a go. With a huge amount of content that keeps itself interesting, exciting, and, at times, awe-inspiring, Assassin’s Creed II is a must-play title for the 2009 holiday season. After knocking out the main story, fully outfitting your villa, collecting every weapon, plucking up every feather, and uncovering the truth shrouded by the glyphs, you’ll find yourself fully satisfied with the experience and begging for more. Assassin’s Creed III can’t get here soon enough.

Our ratings for Assassin's Creed 2 on Xbox 360 out of 100 (Ratings FAQ)
Presentation
95
A strong visual style, amazing graphics, and an absolutely breathtakingly accurate recreation of renaissance Italy all lead to one of the most memorable and best looking games of the year.
Gameplay
90
Fixing the vast majority of the flaws from the first tile, the game is an absolute blast to play with only the combat retaining a certain level of awkwardness from the original.
Single Player
95
With one of the richest stories of this generation, Assassin's Creed II builds on everything from the first title, adding both character and variety in spades.
Multiplayer
NR
None
Performance
90
With few bugs, great frame rate, and only the occasional glitch in controls, Assassin's Creed II performs exactly as you'd expect AAA title to.
Overall
93
A first-rate story, great visuals, voice work, varied game play, and some of the most memorable characters of recent years, Assassin's Creed II is a simply must-play title that'll round off your 2009 with a bang (or a hidden blade to the throat).

Our Review of Assassin's Creed 2
93%
Superb
The Verdict:
"Assassin?s Creed II corrects nearly all the problems of its predecessor, transports players to a beautifully realized Renaissance Italy, and results in one of the best games of 2009."
Game Ranking
Assassin's Creed 2 is ranked #3 out of 1646 total reviewed games. It is currently our top ranked game released in 2009! (69 in total)
2. Crysis
PC
3. Assassin's Creed 2

All videos for Assassin's Creed 2 (3)
Advertisement ▼