I can't say I've recently waded waters quite as polarized as the work of Platinum Games. Whilst the sensational Bayonetta series has secured a name for itself as one of the hack n' slash bigwigs, brushes with the quite unspectacular Legend of Korra have left my Platinum ventures a touch tentative. And when it comes to childhood source material, the stakes can only rise, and after the pleasant (and surprisingly competent) throwback that was Transformers Devastation, I had high hopes for Teenage Mutant Ninja Turtles: Mutants in Manhattan to continue the trend with one of the kingpins of Saturday-morning television. 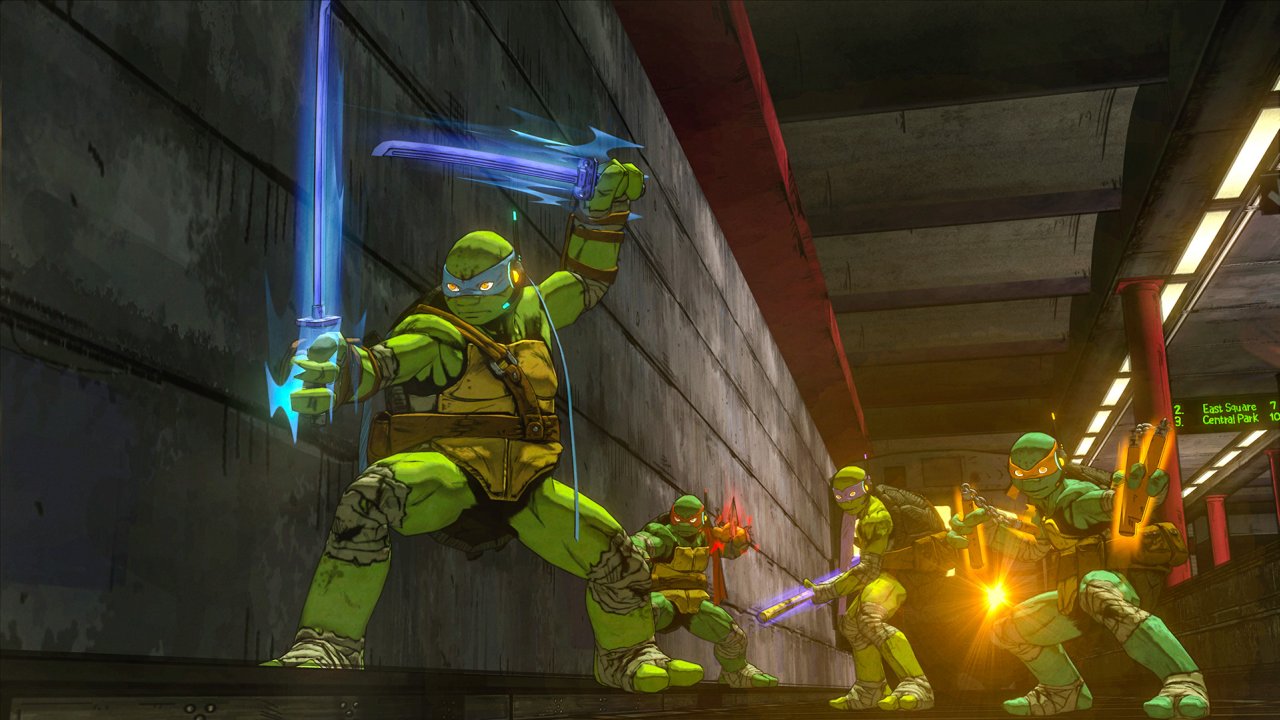 I found my glass-half-full-attitude promptly vaporized within the opening half-hour. Transformers this was not. Instead, I found myself sifting through lifeless environments, in a brawler stuffed with ninja clones, and a troubled co-op combat scheme that played havoc with each encounter.

As was the case with the winning Transformers Devastation, Mutants in Manhattan presents an archetypal hero set-up. Following Shredder and Krang's ever-enthused pursuit of world domination, they've wangled some grunts in order to seize the city of Manhattan, with classic TMNT baddies like Bebop, Wingnut and Rocksteady fronting the show. Naturally, it falls to our mask-donning, sewer-dwelling, pizza-chomping vigilantes to pacify Shredder and his insatiable Foot Clan. It's a premise sprung right out of the show, and thankfully it feels that way, with a comic book aesthetic that strengthens ties to the Turtles graphic novels.

It's when you get into the details that the cracks inevitably begin to show. Dialogue feels lackluster and - in many places - just awkward, compiling unimaginative remarks with shoehorned gags that leave little room for its crime-fighting plot to unfold. The promising villainy of the main antagonists is dwarfed by repetitive humour, with most of the major cutscenes giving way to a bit about Michelangelo’s love affair with pizza. Whilst TMNT's premise certainly holds a vague sentimentality for old-school Turtles fans, the sustenance feels very much targeted at younger audiences. Even then, its deluge of pizza-jokes and incessant dweebing and dudeing feels less hilarious than it does pandering, surfacing in repetitive combat dialogue that had me more often irked than it did lapsed in uncontrollable mirth. 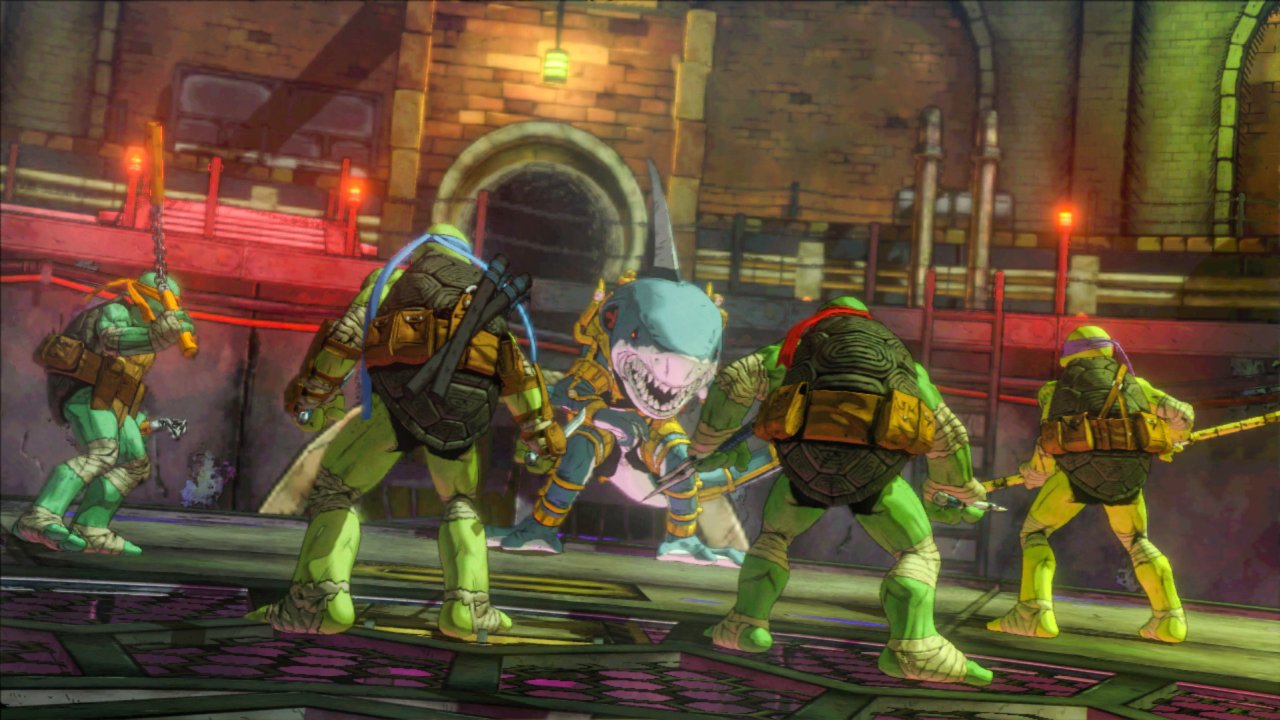 Unfortunately neither the similarity nor charm extend much beyond the character visuals, as Mutants in Manhattan lacks the substance, variety and cohesion that made Transformers' autobot rampage such an unexpected hit. Environments are samey, with levels unfolding across generic sewers and repetitive New York cityscapes that offer little to encourage players to look around.

Not - indeed - that there's much to look around for. More often was I skulking about aimlessly, as on-screen prompts told me to 'Find the enemy!' or 'Locate the boss!', whilst a distanced April O'Neil called me up now and again to tell me pretty much the same thing. Some worlds are more cohesive than others. The sewers are reasonably navigable, working well with the Turtle-cam mechanic to highlight outstanding enemies and objectives, whilst the game's opening city had me trawling fruitlessly in attempt to find my next point of entry. Yet each objective plays out identically, shunting you into hordes of bog-standard enemies till you're graciously given access to a boss.

Occasionally you might find yourself hauling gold, hacking computers or defusing bombs, but they require so little effort by the player that they almost pass by unnoticed. Hacking could have diversified the gameplay, opening up opportunities for puzzles or the quirky little minigames Sly Cooper seemed so fond of. Instead, I was reduced to literally holding the circle button, whilst Donatello tippety-tapped away till the objective completed itself, at which point I was patted on the head with an 'A' rank.

The ranking system is desperately unpredictable. Whilst button-mashing your way through a stage with copious deaths might summon an A rank, I found my more successful attempts barely scraping a C. It almost felt as if I was being told not to try too hard, making pre-boss stages feel even more empty than they previously had been.

One stage required me to take out five enemies without being spotted, which might've been a refreshing challenge had my Foot-Clan targets not been positioned with their backs to me in every encounter. I could literally plough straight into them to defeat in a single hit, without a care in the world for alarming nearby enemies since each enemy was contained in their own solitary alcove. These challenges feel as if they're trying to switch up the pace, whilst endeavoring to make it easy for the kids; something that only really succeeds in more painstaking tedium.

The boss encounters are by far the best part of the game, comprising lengthy, challenging battles with classic TMNT cronies. Bedecked with seven health-bars that become tougher to deplete as fights progress, bosses employ their own combat strategies that allow for a playstyle more dynamic than can ever be hoped of the main stages, offering thrice the challenge and heaps more style. And as enamored as I became at the sight of Shredder's steel-plated mug, I was more gloomily convinced that it was the game's bosses that were holding the fiasco together.

Mutants in Manhattan rests on the two-pronged combat scheme quickly becoming a hallmark of Platinum's hack n' slash fare. But whilst Devastation's streamlined Bayonetta scheme extended timed combat and satisfying heavy-attacks, the turtles are decidedly less majestic in their own adolescent skirmishes. You can glide your way through the game's nine stages blindly pounding the attack button, accompanied by your masked vigilante pals who fight in such close proximity that battles quickly become overwhelming, with so much going on at once that it's difficult to invoke much strategy into your crime-fighty travails. And that's when they manage to reach the darn targets. They're usually bunched up in a corner somewhere like a gaggle of sociophobic school children.

Each turtle comes equipped with their own special Ninjutsu abilities that can be activated during combat to give your chosen hero a temporary boost. Leonardo - for example - can slow time, whilst Raphael's whirling spin-attack sends him rocketing into enemies like a hot-tempered spinning top. You can even cast 'healing circles' that regenerate the health of those within it. Ninjutsu is most effective during the multi-layered boss fights, and provide some much-needed clarity amidst the chaotic turtle-scrum combat so often descends into.

Whilst Ninjutsu is fully upgradeable in the 'Turtle Loadout' menu, the messy combat and facile enemies render enhancements somewhat futile. There's the similar option to tinker with Charms you pick up after completing levels to grant various boosts, but they contribute so little to the overall gameplay that they feel tacked on for bulk. 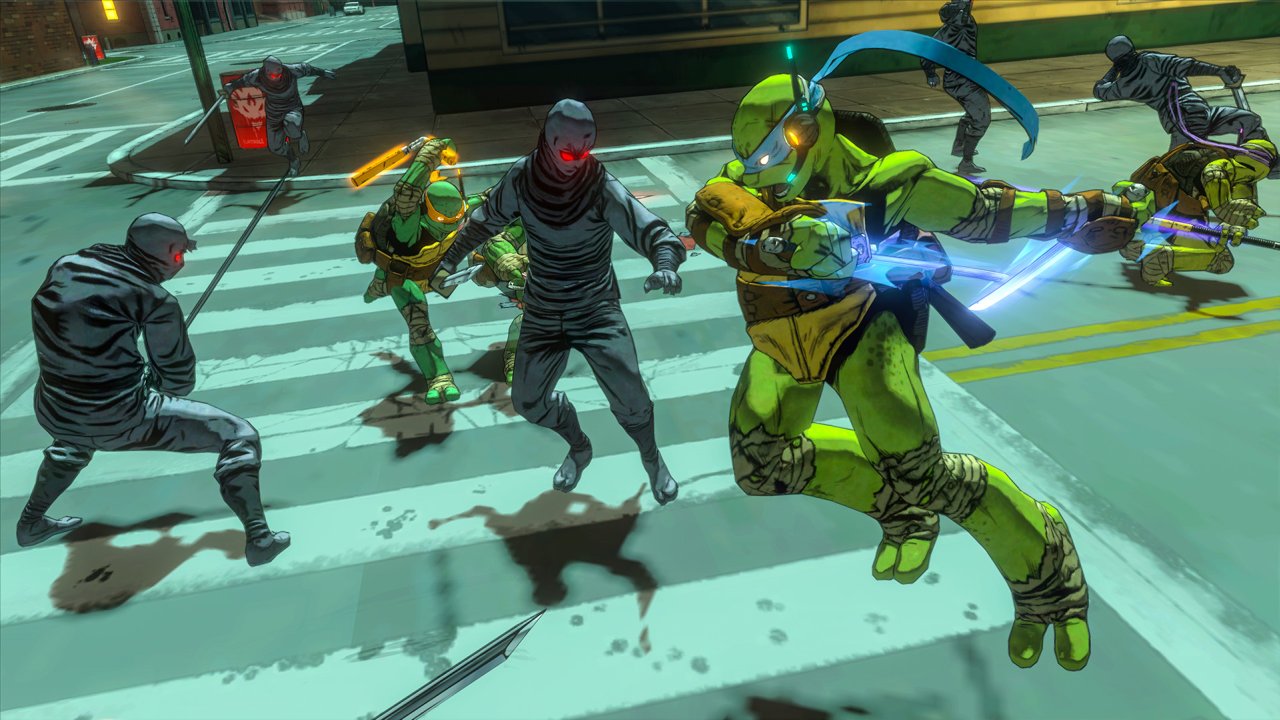 You can combine your Ninjutsu with another turtle too, such as Mikey's bopping dance ability and Leo's time-slowing mechanic to deliver a beefy combo attack. But as amusing as it is to see enemies boogie-on-down in the middle of a fight, the game's co-op approach to combat feels convoluted, which often lead to the effects of my moves passing unnoticed. Instead, I was trapped in some incessant loop of button mashery, in order to rack up a sufficient tally of Foot-kills so I could go clobber the boss. The affair is over in around five hours, but for all the length of an after-dinner-mint, it's remarkable how much longer the game feels.

Given the game's co-op style of play, TMNT's lack of local multiplayer feels something of a disservice. Platinum have mentioned that they forelayed the addition of local co-op in order to enable the game to run at 60 frames per second. What transpired was Mutants in Manhattan locked at thirty frames across all platforms, with no local co-op to soften the blow. I'm not a stickler for fidelity, but considering just how fast-paced and chaotic encounters become in TMNT, running at a slower frame-rate doesn't make the game any clearer, cleaner, or anywhere near as enjoyable as it could have been. Playing online at least dims the confused chaos of the single-player's AI, but levels are neither more varied, nor any more fulfilling alongside three comrades.

TMNT: Mutants in Manhattan feels something of a missed opportunity. Having struck gold with a punchy hark back to 80's toonery, Platinum's attempt to continue the trend has come up more of a lead balloon. Quite unlike the swift, dynamic styles of Transformers Devastation, it plunks you into generic, underdeveloped environments to face swathes of unchanging enemies, with a pretty boss battle thrown in at the end to see levels through. It's a perplexing anomaly amidst the likes of Bayonetta and Metal Gear Rising because it seems so remarkably rushed; too much like a prototype to compare to other Platinum romps. It's only vaguely flecked with potential and it feels poorly utilized, with far too much filler bridging the gaps between glints of genuine promise.

Our ratings for TMNT: Mutants in Manhattan on PlayStation 3 out of 100 (Ratings FAQ)
Presentation
79
With a comic-book art style carried over from Transformers, Platinum envision some of TMNT's best-known bad guys with nostalgic flair. Unfortunately, worlds are underutilized and devoid of anything interesting.
Gameplay
40
The AI-controlled co-op set up is messy and enemy encounters convoluted, making button-mashing the modus operandi for virtually the entire game. When you're not hammering two attack buttons, you're holding one statically till the game tells you to stop.
Single Player
39
A five-hour slog of repetitive encounters and labored pizza jokes, with only the promise of a vaguely competent boss battle at the end to hold it all together.
Multiplayer
40
Online co-op partially solves the campaign's wonky AI issue, but playing alongside three sentient turtle comrades doesn't do much to alleviate the tedium of TMNT's repetitive objectives.
Performance
49
The game is locked at 30fps, which doesn't do the game's muddled skirmishes any favors. A few minor hitches are thrown into the fray when combat gets soupy, with loading screens erring on just long enough to begin to grate.
Overall
48
TMNT: Mutants in Manhattan is a repetitive hack n' slash that forces the player time and again into encounters with samey enemies against a paltry selection of passionless backdrops. It's really only saved by the bosses, but the amount of filler you'll need to sift through to fight them just keeps a'coming. 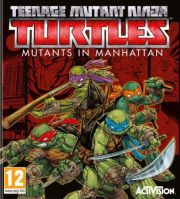 All videos for TMNT: Mutants in Manhattan (2)
Advertisement ▼