Shadow of the Beast Review

Shadow of the Beast was one of the Amiga classics. The sort of game children whispered about at the gates before school, recounting tall, clamouring tales of their hard-as-nails older sibling who - pinky swear - got past whatshisname on this part or that bit. A game so unashamedly punishing that you'd probably find seasoned Beast veterans retiring to their quarters of a night with a mug of hot cocoa and some deprived-style Dark Souls. It also happened to be amongst the best looking titles on the system. Its neat parallax scrolling and distinctive designs popped, commanding a certain level of respect, if not always a picnic to play. 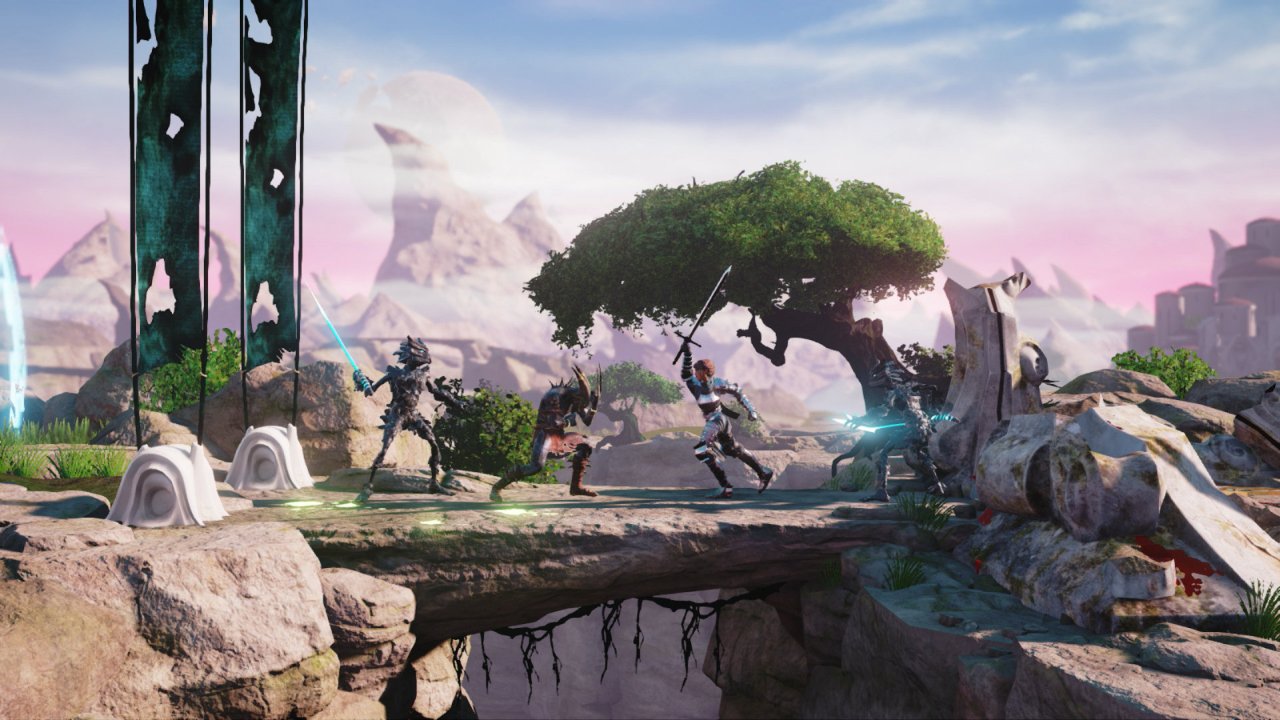 But alas, the insatiable advancement of modern technology has made the crutch of impressive visuals and wicked character design wobblier by the day, and though Heavy Spectrum's Beast remake exudes a profound reverence for its 1989 predecessor, it appears so busy homaging that it stumbles as a competent brawler.

Perhaps as to be expected, Shadow of the Beast demonstrates the diluted narrative assumed by the 1989 original. You play as Aarbron, a kidnapped child who has since been corrupted by abhorrent Beast Master Maletoth, leaving him a demonic monster with fork-like claws and alarming dental hygeine. Controlled by a beastly mage, Maletoth sends Aarbron in search of another naive little infant (presumably to enlist in his steadily growing clan of corruptible foot-babies), slaughtering all he encounters. The chains are promptly broken after Aarbron inadvertently murders his father, leading him off throughout the land of Karamoon, on an arduous quest of vengeance against his malevolent kidnapper.

Early on, you have about as much power as you'd expect. You begin tethered to Maeltoth's minion Zelek, who appears to act as a training wheel of sorts throughout the game's tutorial. If anything, he's more of a plot-trigger than a combat mechanic, as Zelek himself lends little to Aarbron's capabilities. On the contrary, during many moments in the tutorial, he actually hindered my acquaintance with the game. He frequently got in the way of my enemy strikes, resulting in a frustratingly slow recovery animation that left me momentarily vulnerable after accidentally hitting him. Aarbron's lack of free will was an interesting plot-point, but a tutorial is - for all intents and purposes - a place to learn the ropes; something Shadow of the Beast doesn't quite allow the freedom to fully do.

The problem fades once you're freed, but only so others can join the party. Despite a straightforward and memorable layout, controls feel unresponsive and delayed; something that reminds of its 1989 predecessor - and not in the cute, nostalgic way. 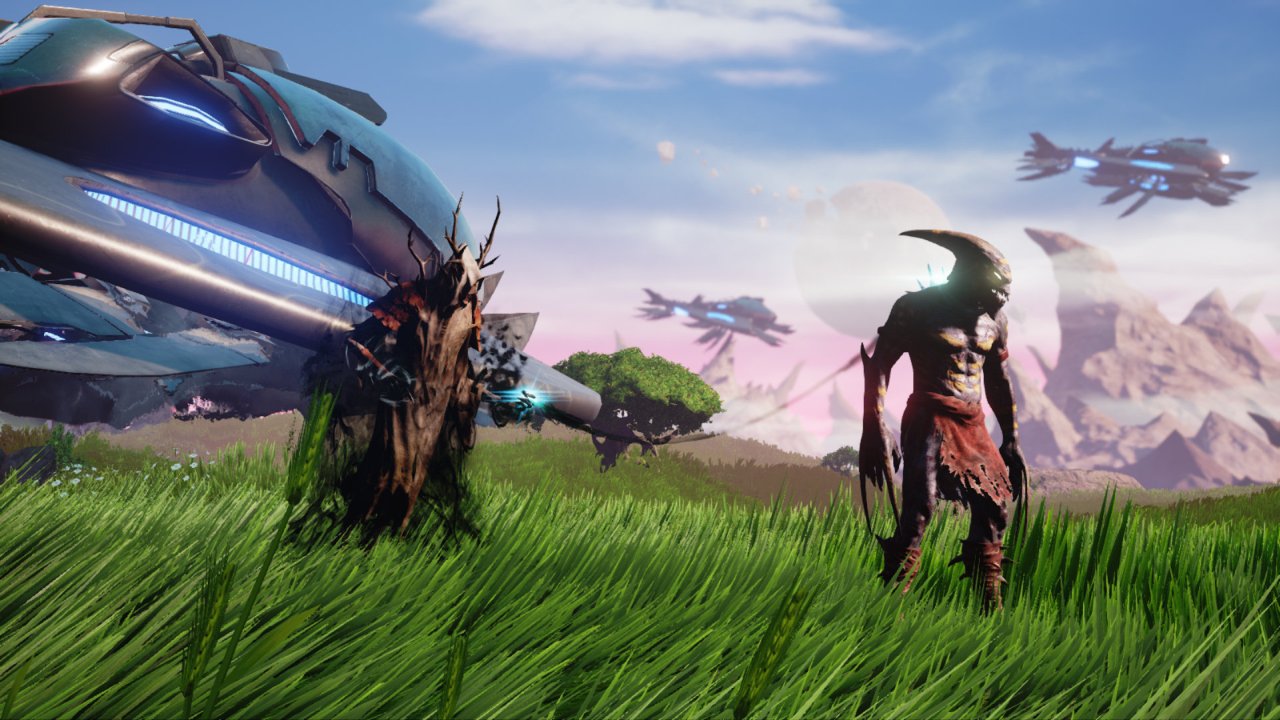 In addition to a typical attack function, Aarbron can use his formidable fork-hands to stun his otherworldly opponents, as well as block or roll to (ostensibly) evade their attacks. He's also a novice magician, equipped with a 'Blood Meter' to fuel the couple of special abilities he has at his disposal. Prodding the touchpad will send innumerable spines erupting from the ground - which would've come in handy, had the power not taken an exhaustible amount of time to actually affect enemies. Unashamedly my favourite (and most functional) however is Blood Yield, allowing you to drain enemies of their lifesblood to recover a smidgeon of health, complete with a brutal animation as you maul them into gory smithereens. Kratos would be jealous.

Often the piece de resistance of many a brawler, Shadow of the Beast meshes skill-based combat with a rallying combo multiplier, with ranks awarded after each level. Whilst you can blast your way through by ferociously hammering the attack button like a caffeinated Bob the Builder, you'll miss out on the catalogue of bonuses Shadow of the Beast has on offer. That being said, combo-hunters may find themselves considerably frustrated by the game's controls, as they're often too ponderous to yield an impressive rank. It's near impossible to fend off a group attack from both sides without taking damage, because Aarbron makes such a job out of killing just one opponent. Even if you manage to cobble together a few hits, the miraculous combo is soon thwarted by the delayed control scheme or some sluggish recovery animation.

There are some light platforming elements to contend with too, as per the Amiga original. There are similarities extending to the early Oddworld games now and then, but any familiarity is purely aesthetic, as platforming here is about as slippery as a lukewarm ice pole, and nowhere near as pleasant. Using your pseudo-Wolverine claws, you can slide your way into ravines and climb rocky walls - or so the intrusive white text at the bottom of the screen often claims. But jumping too often feels slow, with climbing commanding a similar clunkiness. It could have been a fun, nifty inclusion to supplement the combat, but the delayed controls are inconvenient at best and infuriating at worst. I get the notion it's trying to be retro, but it doesn't translate well into the current-gen reboot, making areas laborious to explore. 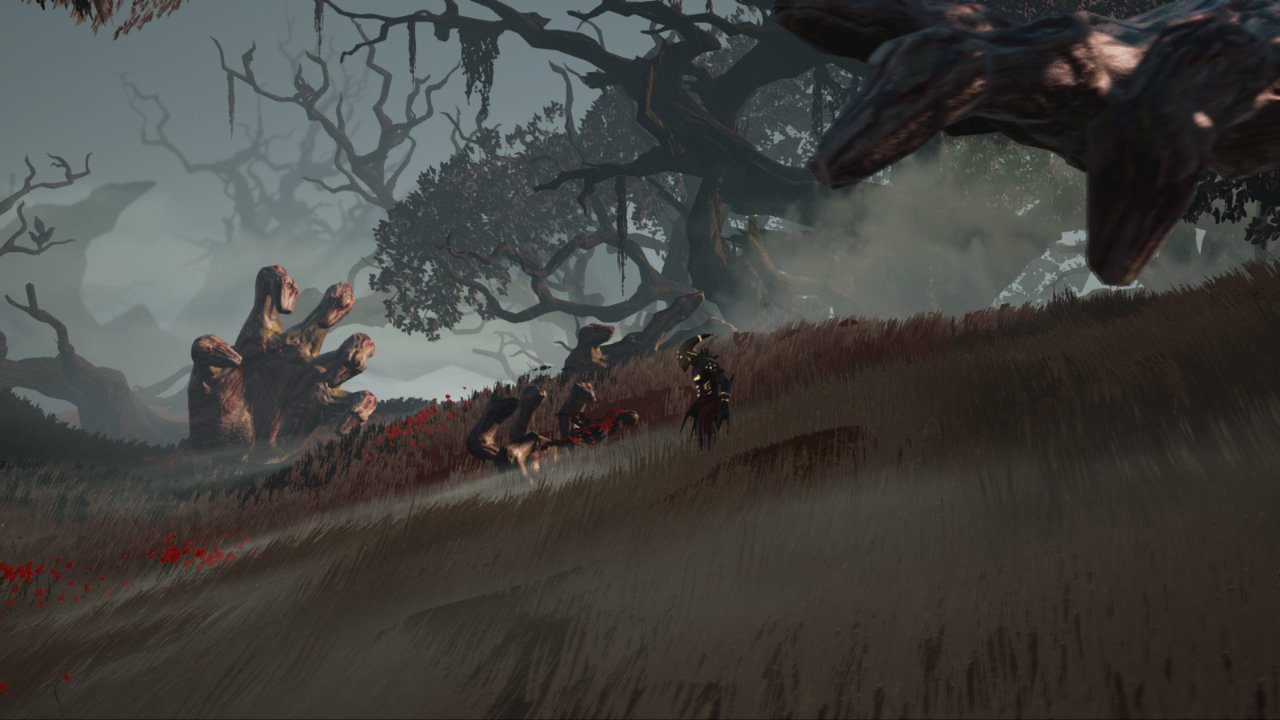 Areas themselves open promisingly, veering mysteriously off into alcoves that look like they lead somewhere, only to arrive at dead-ends or fatal pitfalls, with little reward to compensate. Occasionally levels give you new toys to play with, but there's not much opportunity to use them again once the stage is over. The gun is clunkily reminiscent of Super Metroid's arm cannon, and makes flooring some of the more mobile enemies difficult. At least Samus could jump and shoot simultaneously; Aarbron would be hard pushed to leapfrog a duck whilst wielding such a contraption. Since many of the game's secrets add to the game's storyline, Shadow of the Beast's odd level structure does little to entice players to seek out its hidden content.

Some of the early puzzles are enjoyable, involving timed teleporting through ethereal portals and casting shadows to match archaic murals. Others, however, are less concise, seguing more and more into obscurity the further the game progresses. One accursed level had me scouring a pitch-dark complex for a 'source of light', whilst attempting to dodge electrical conduits that - if touched - would send me all the way back to the beginning. After an age of fruitless searching, it transpired the damn item actually rested oh-so-conveniently in a place that would've been out of bounds in any other part of the game, because of course it was. It establishes its own rickety sets of rules, only to abandon them completely in pursuit of a greater challenge-level.

If there's one thing that saves it, it's the presentation. Shadow of the Beast's world is haunting to look at. In many ways it's a shame it wasn't developed with a 3D layout, for enviroments here feel so ripe with character that they almost beckon to be explored further. Shadow of the Beast instead retains the 2D layout of the '89 original, embellishing its craggy, be-pixeled spires and dynamic horizon backdrops with trendy, '2.5D' flair. The remake's art style strikes a vague resonance to Oddworld reboot New n' Tasty, with bloody combo sequences captured with the ludicrous romanticism of God of War. Character detail is elegantly grim. Karamoon is home to mechanical wasp-folk, galumphing troglodytes and hovering Dryads whose guts visibly churn through their conveniently transparent skin. Though you won't encounter many friendly-folk or NPC's during your bloodthirsty travels, each realm harbours its own sense of character. There are dense onyx kingdoms littered with ancient technologies, and hand-shaped trees that quiver just noticeably enough to yield a second glance. Whilst its Amiga predecessor flaunted the parallax aesthetic, the current-gen upscale really allows the arcane beauty of the game to breathe. 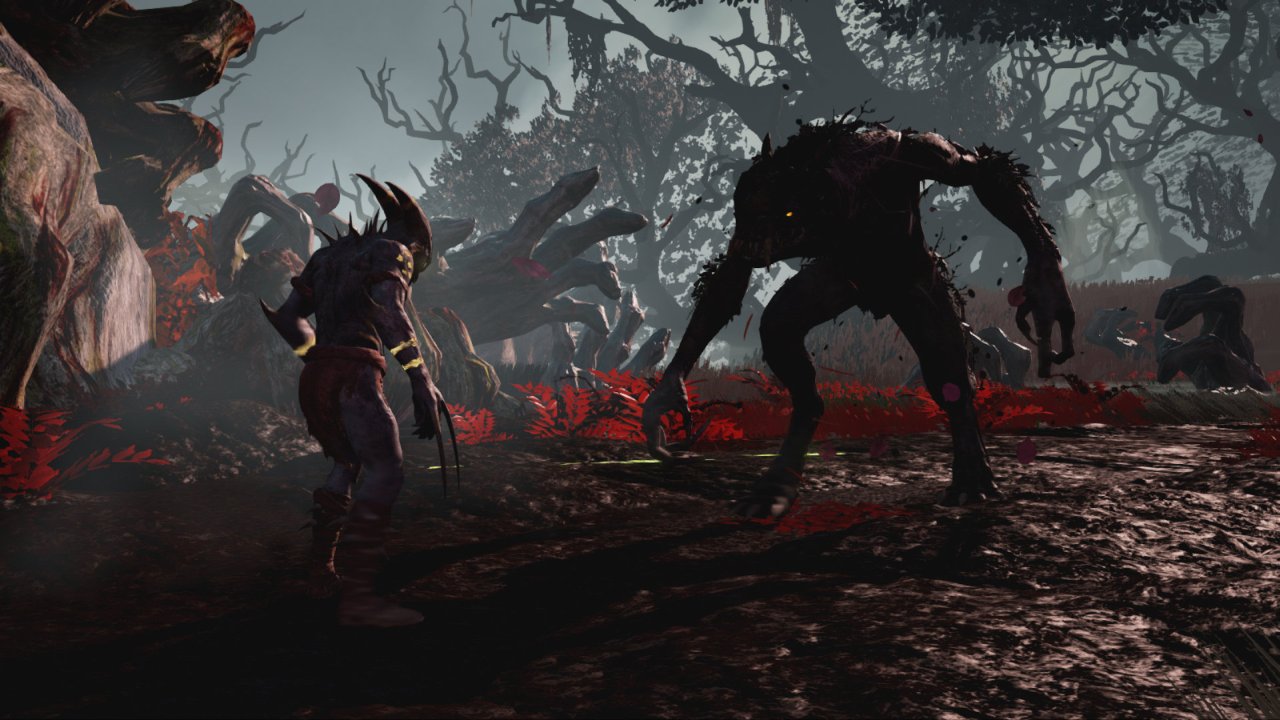 Transition segments are captured cinematically with a discernible nod to God of War, but the sweeping pans and dramatic camera pull-backs linger with all the insurmountable awkwardness of a smartphone-deprived teenager. The worst of these moments occurs early on; as I crossed a large bridge overlooking a fantastical medieval kingdom, Aarbron was reduced to a leisurely saunter, leaving the camera awkwardly static as it waited for me to reach the next area. A lovely view is all well and good for all of a few seconds, but in a brawler, the initial grandeur soon gives way to impatient harumphing for the next hostile encounter.

You can bluster your way through the game in around four hours - much less if you're fortunate enough not to get stuck. If you're playing on Beginner Mode, length is cut further, but if you're determined to get the good ending, you'll want to play on a higher difficulty. Despite its brief play-length though, Shadow of the Beast comprises a surprising amount of unlockables, for those willing to seek them out. Beating up baddies and performing admirably in battle accumulates Mana, which can be spent in the 'Wisdom of Shadows' to unlock various trinkets and boosts to give Aarbron a little extra horse-power. While Health upgrades are traditional brawler fair, Shadow of the Beast also offers Talismans to grant extra buffs like Iron Skin (protecting Aarbron from damage as long as he's not fresh out of blood) and the option to boost your Blood Yield capacity. The only item really worth unlocking is an emulation of the Amiga original, which is every bit as crushing as it was, making for a neat nostalgia trip. There are also various 'Forbidden Tomes' to collect; an intriguing add-on that subtitles the multiple tongues spat at you by Karamoon's alien natives, to divulge more of the game's shrouded plot. If you're a fan of lore or too curious for your own good, it might carry a second round, but that's a very big if, and an even bigger might.

Shadow of the Beast doesn't hide its retro roots, and in some ways it's admirable. The world of Karamoon revels with a graphical finesse the Amiga could only dream of, whilst still remaining as unique as it always has. It's a game with a lot of love in its heart, demonstrating tremendous loyalty to retro formulas, with some inclusions beckoning a juvenile grin. But beneath its mystic universe, Shadow of the Beast is fantastically bow-kneed. Its delayed platforming segments and prolonged pacing are unnecessarily frustrating, and its unresponsive controls feel more dated than nostalgic. Coupled with a hacky level design that can be cryptic and unrewarding, it ultimately falls short as a modern-day hark to a classic Amiga game.

Our ratings for Shadow of the Beast on PlayStation 4 out of 100 (Ratings FAQ)
Presentation
70
The world of Karamoon is truly enchanting, proffering imaginative character design amidst a haunting backdrop that practically bleeds the original's sci-fi style.
Gameplay
35
Gameplay still feels stuck in the 16-bit era. Controls are slippy and delayed, whilst levels are patchy and misleading, making the platforming as redundant as its clunky combat sequences.
Single Player
59
Story is reasonably evasive, with no more introduction than can be surmised from a few brief cutscenes. It develops if you do a bit of treasure-hunting, but the clunky gameplay ultimately undermines the game's catalogue of add-ons, despite its short length.
Multiplayer
NR
None
Performance
65
Frame rate is consistent, with no bugs to speak of, though load times can occasionally summon an eye-roll or two.
Overall
54
Shadow of the Beast is pretty to look at, but poor level design and lack of reward leaves the player frustrated and disappointed. It's evidently bursting to share nostalgia with the world, but that fondness ultimately thwarts the game's potential as a current-gen brawler.

Shadow of the Beast 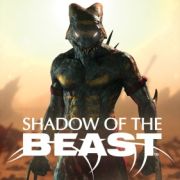 All videos for Shadow of the Beast (5)
Advertisement ▼