Retire early from this clunky kart-racer

Back in my younger days, the kart-racer was console gold. Whilst the notion of ploughing cars into things and vice versa was jabbed at in the 1970's thanks to Taito's defunct Crashing Race, it was in the 32-bit era of the 90's that vibrant tracks, goofy mascots and vehicular combat really hit it off. By the time the noughties rolled around, you could take to an item-strewn track as a Looney Tune, Digimon, Pac-Man and for reasons almost entirely commercial, an accursed M&M. But with the indie sphere up to its eyes in pixelly RPG's and the 'open world' quickly becoming the in-thing amongst triple-A titles, the karting menagerie that once was has since transcended into a few brief whip-rounds of Mario Kart. 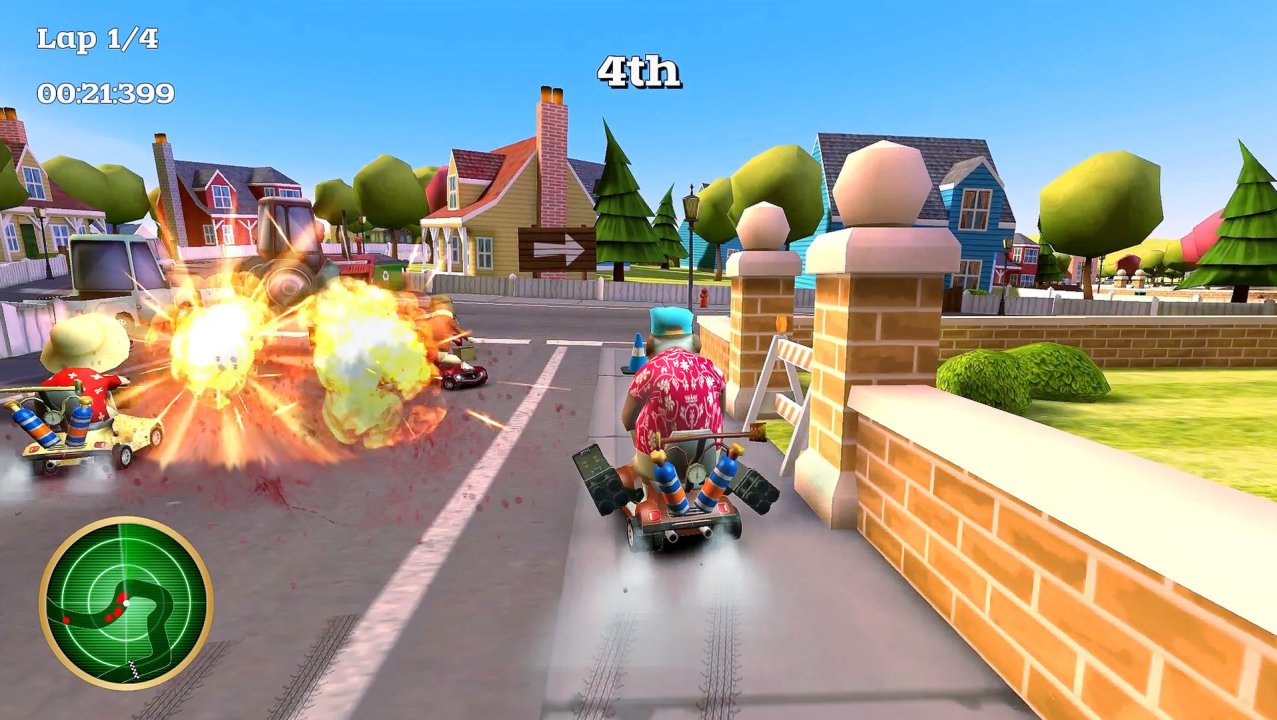 Perhaps it's this that makes Milky Tea Studios’ Coffin Dodgers stick out like a sore thumb. Drawing overt inspiration from the Crash Team Racings and Mario Karts of the PlayStation-N64 era, the game sees old codgers in a rally against Death, but despite its quirky premise, it makes for a dated experience that feels discernibly stuck in the past.

The game begins promisingly, opening with a brief cutscene extending the pleasant retirement village of Sunny Pines; a mild suburb that might've been dripping with neighbourly charm, had Death itself not been on the prowl to claim the souls of those who're getting on a bit. The action happens upon Rudolf - the obligatory war veteran to head Coffin Dodgers' stereotypical cast. After deciding he's not headed for the pearly gates just yet, he and his six geriatric chums rev up their mobility chairs in a bid for their souls against the Grim Reaper in an all-out scooter showdown. It's a premise as bleak as it is inventive - one that no doubt carries potential.

But as amusing as I found Coffin Dodgers' quirky premise and grandpa-gone-rogue humour, its wonky options menu didn't exactly start my vehicular antics off in good stead. Visual options appear relatively accommodative, provided you aren't intending to use them; something I soon found out when attempting to change resolution. Switching screen sizes, tweaking resolution options or indeed changing any of the game's settings resulted in extensive load times and prompt system freezes that required me not only to restart the game, but reboot my PC. Naturally, my visual choices were not remembered upon revisiting the game's menu screen.

The Sunny Pines crew is comprised of seven ancient racers, all of whom are playable to bolster your rallies with Death. A surprisingly brief Story Mode spans the village, the farm and the graveyard, through which you race against the Reaper, toppling fellow oldies to ensure your own seasoned soul remains beyond Death's grasp. As demonstrated by the heralded Crash Team Racing and Mario Kart games, a whip-round a track just wouldn't feel the same without some beligerent means of sabotaging your enemies; something Coffin Dodgers endeavours to accommodate, but doesn't quite nail. In addition to the standard rocket to plough into the sucker in first place, driving into the numerous, question-marked suitcases lying about the track you'll come across placeable oil slicks, shields of invincibility and force fields to uproot nearby competition. You're also armed with a trusty walking stick to whack your elderly competitors should races ever cut close. 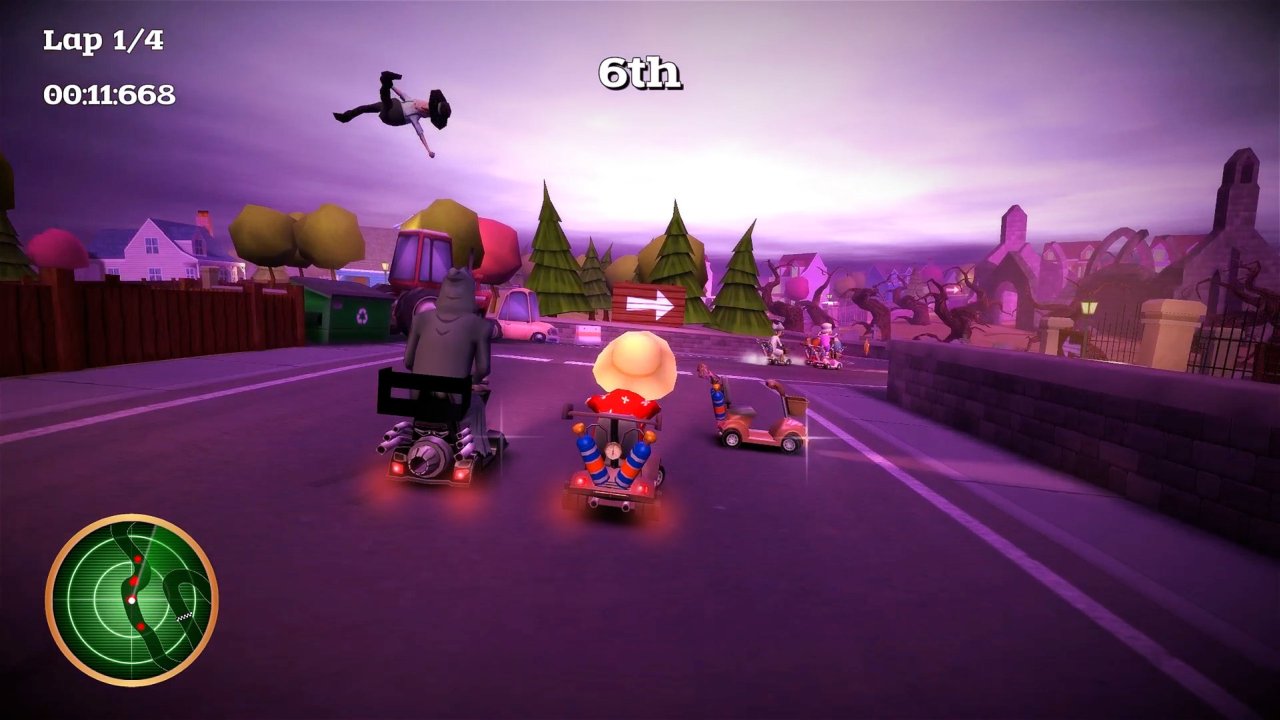 Each area proffers three races lasting four laps, in which you're pitted against six AI seniors, as well as the Reaper himself. Good ol' Grim will usually assume first place, and is generally the most challenging opponent on the track. Even so, however, I was taken aback at just how easy he was to topple. A few raps over the head or a rocket to the trunk, and Death himself was out for the count. Whilst admittedly satisfying the first few times, Coffin Dodgers' plain-sailing victories begin to rapidly cheapen as races progress.

Cheaper still is the game's AI combat. Whilst pickups are abundant for your own combat endeavours, your aged counterparts will take every opportunity to send explosions your way - many of which are nigh on impossible to dodge. Getting hit also propels your fogey magnificently across the track with terrific, flailing finesse, but the amusing charm of these instances is swiftly marred by just how long it takes to get back on the road. Animations feel prolonged as if to allow the hilarity to settle before inviting you to continue, by which time your chance at first place is officially borked. The debacle is then perpetuated by the stiff control scheme; something that makes navigating the various tight corners of the game less of an enthralling challenge, and more of a pain in the neck.

Like many of its retro predecessors, Coffin Dodgers isn't a pretty game. Its underdetailed environments and rounded character designs seem rushed, and lack enough in detail to feel sprung from an early PS1 karter. Quite contrary to the nostalgic vibe Coffin Dodgers ostensibly aims for, its drab palette and marshmallowy visuals merely feel restrictive; something that renders its generic neighbourhood areas all the more lifeless. The pensioners themselves are entirely what you'd expect them to be, hugging the stereotypical spectrum from Rudolf the reminiscent war veteran, to Hank the former Biker, to Martha the inevitable 'fiesty granny'. Whilst recognizable - even entertaining at first glance - characters lack originality and don't hold attention for long. There are no special abilities or items specific to each character, so character selection is largely aesthetic and ultimately lacks meaning. Indeed, I only opted for Rudolf because I liked his hat.

The mobility scooter also remains the same regardless of character or mode. Whilst, granted, you can upgrade your hog throughout story mode in the OAPs' Garage, changes are neither necessary nor especially advantageous. There are some useful features available to tinker with - such as acceleration and speed - and nifty basket upgrades that allows you to hold two pickups at once and switch between them during races. But the scooter itself can't be switched out or replaced, and races can feel pretty aimless once you realize your vehicular antics won't be reimbursed with another, better ride. 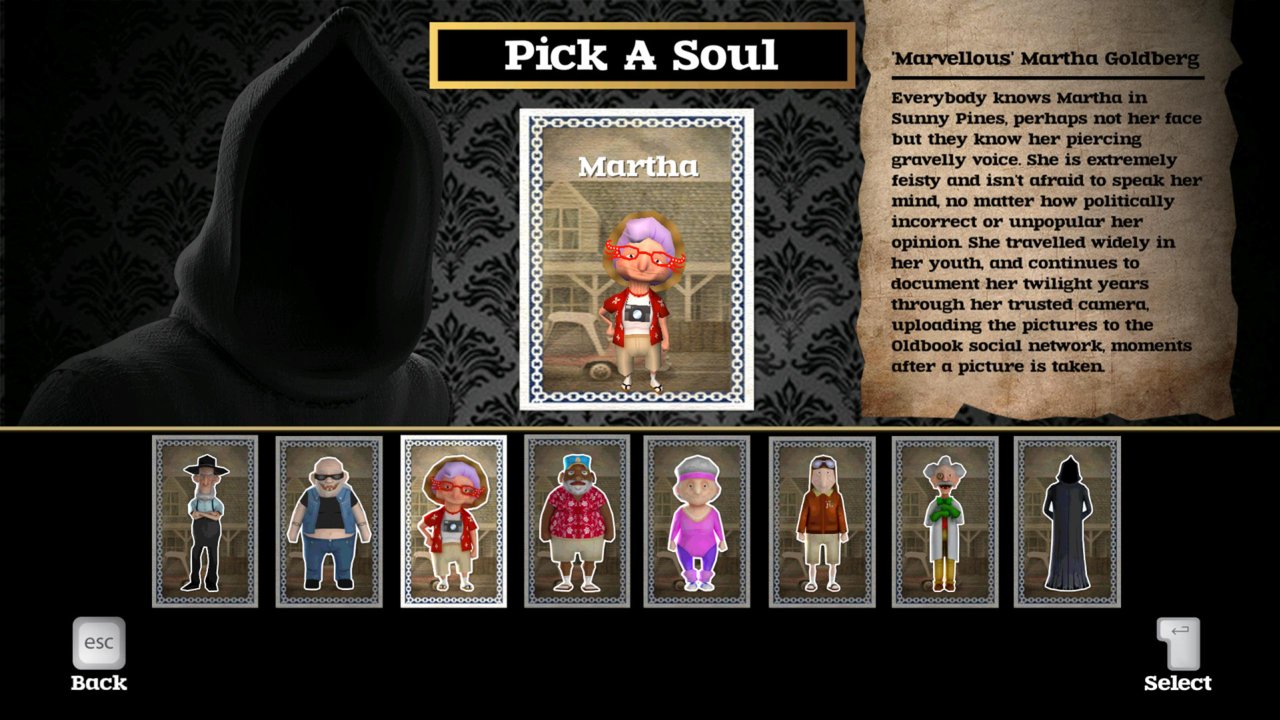 There are several modes to Coffin Dodgers' scooting endeavours, but most either feel unjustified or lend little to the overall experience. A half-asked Open World Mode has you pootling around the residential area, according to an arrow directing you to simplistic time-trials and split-screen multiplayer. The presence of the 'open world mode' is sorely lacking in kart racers today, and its reappearance could have been a real treat, if it wasn't for sheer lack of substance. The so-named 'Crazy Granddad' mode is veritably maddening, involving throwing yourself into dislodged dentures and war medals against the clock, for no real reason other than for a nice trophy. Crazy indeed.

There's also Network Multiplayer; a mode that ironically reached its peak during its fledgling days in the Early Access nest. Network mode is positively barren and equally futile (about 10 months after the game originally launched), sporting rarely more than ten concurrent players versus its former three hundred. Naturally, Coffin Dodgers' social aspects are best examined through its split-screen mode - if examined at all.

New Game Plus is also an option, but if you're looking for tougher trials or punishing races you'll be hard-pushed to find them in Coffin Dodgers. In fact, once your scooter is fully upgraded, your geriatric joyride will quite likely feel easier, so unless you have your heart set on whirling around the track as the Grim Reaper (who subsequently becomes playable after beating Story Mode), there's not much incentive to return to Pines' winding tracks.

Amidst the banalities of the gameplay, the overbearing main theme does little to pep things up. What ostensibly aims for the bouncy, convivial air of a 90's children's film rapidly peters out after looping incessantly alongside each of the game's races. Given a little more diversity, the soundtrack could have been promising - even lent to the game's humour if like Crash Team Racing it had adapted its main theme according to different maps. But alas, hearing the exact same tune again and again can turn any racer - any game - sour, and Coffin Dodgers is most certainly no exception. 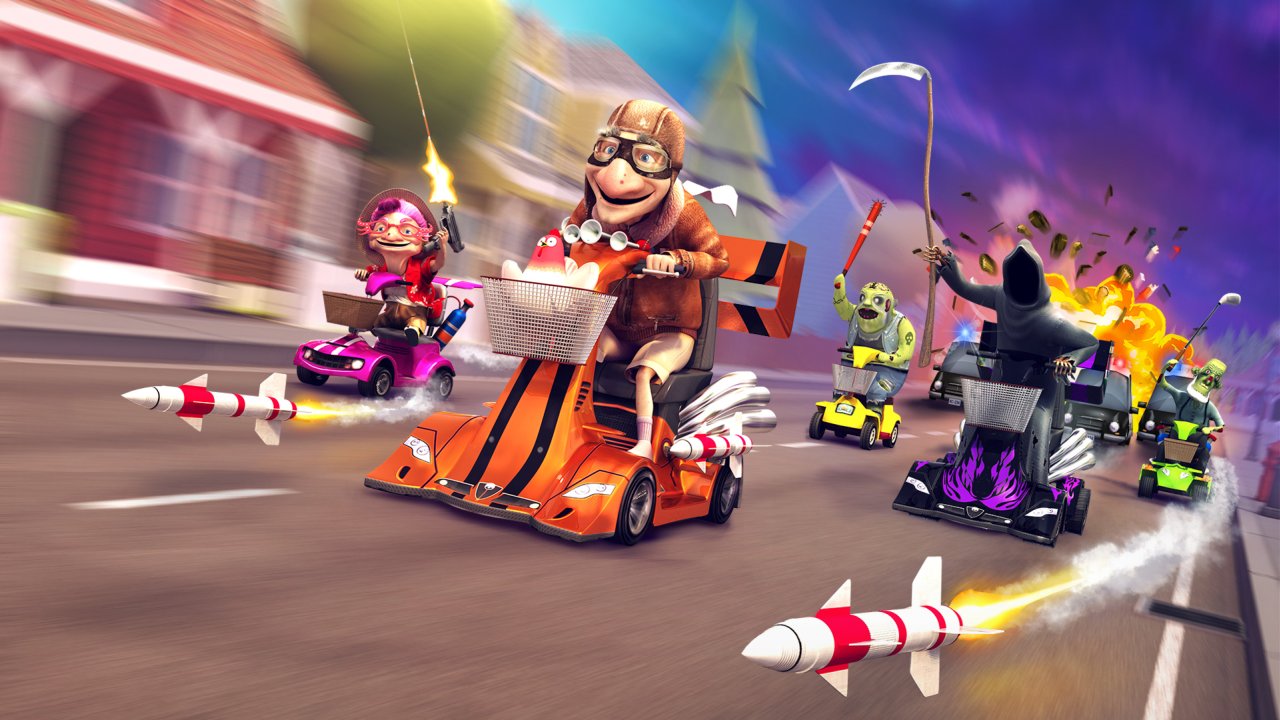 Despite an overtly retro influence and amusing narrative set-up, Coffin Dodgers is less golden oldie than it is withered fogey. It's a shame, because it could have been a fast-paced kart racer, offering slivers of potential for its unique premise and upgrade system to shine. But alongside a slow control scheme, unresponsive menus and barren modes, it appears so heavily influenced by its karting grandfathers that it forgets its contemporary status; ultimately leaving Coffin Dodgers feeling more aged than its 32-bit ancestors.

Our ratings for Coffin Dodgers on PC out of 100 (Ratings FAQ)
Presentation
43
Maps offer glimpses of character, but don't differ all that much. The marshmallowy characters and environments lack detail, presenting a similar likeness to a PS1 racer. It's nostalgic, but only in the way that has you wanting to play something else.
Gameplay
36
Whilst the upgrade system is somewhat useful, environments feel samey and bland, with races too easy to feel satisfying. That is, when you're not being flung across the map as a result of the tight corners and slippy controls.
Single Player
38
Coffin Dodgers' premise casts up a promising basis for the game's cartoon humour, but its uniquity is fumbled in its samey tracks and stagnant challenge level. There's little incentive to return as scooter upgrades make winning even easier, with open-world and time-trial modes feeling aimless and banal.
Multiplayer
30
Online multiplayer is something of a ghost-town, garnering around ten players at best. Split-screen is generally more successful; although races are effectively identical to those in the single player, it's often more exciting playing with friends, as opposed to the cheap-shot AI.
Performance
(Show PC Specs)
CPU: Intel Core i7-4710HQ
GPU: Nvidia GeForce GTX 860M
RAM: 8GB
OS: Windows 10

30
Races hum along to a generally poor framerate, with sudden turns slowing the action further. The menus proffer lengthy freezes, frustrating crashes and drawn-out loading periods.
Overall
36
In an effort to homage the kart-racing classics of the 32-bit era, Coffin Dodgers merely layers unattractive visuals atop an antiquated control scheme and generic world design. If you're yearning to relive your childhood through the goofs of a solid kart-racer, you're better off consulting Mario Kart. 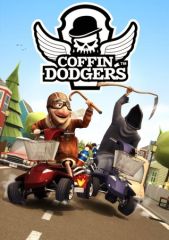