Beautiful on the outside, but an ugly mess on the inside

Looks can be deceiving. Whether you’re talking about a video game or another form of media, it can be extremely easy to jump to a predetermined conclusion. But judging things based on face value is not a wise way to go through life, and every once and a while we need a good reminder of that. The latest reminder comes in the form of Slain! from Wolf Brew Games, and it’s a rather harsh one at that. 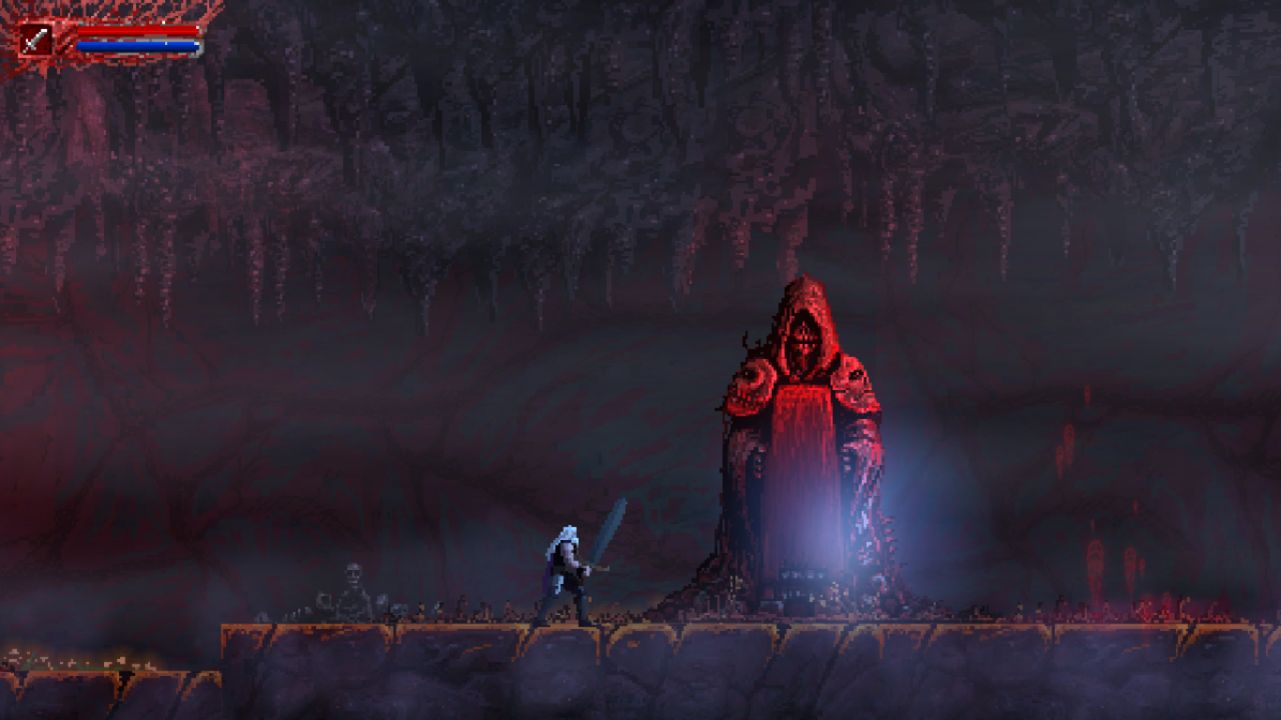 On the surface, Slain! looks absolutely gorgeous and sounds pretty damn good too. With a heavy metal inspiration and pixel art direction, the game’s entire world has a medieval, gothic look to it that perfectly embodies the genre’s persona. The protagonist, Bathoryn, is begrudgingly awoken from his tomb by spirits to go and fight the evil that has retaken the land. This long-haired, Viking-esque warrior is the perfect fit for this barren world.

The backdrop is dark and dreary and is filled with old ruins, twisted forests, and dark caverns. These linear 2D side-scrolling levels are littered with creepy monsters, ranging from skellys (skeletons), witches, and other demonic beings. And if you’re a fan of blood and gore, there’s more here than the latest teen slasher movie that’s showing at your local theatre. Furthermore, it’s the soundtrack that really brings it all together with guitar riffs that pace the game along. The downside to these catchy tunes is that only one song is set for each level, meaning that you’ll be hearing the same ones on repeat for quite a lot of the game.

It’s from here on out that things go downhill rapidly for Slain! Speaking on a completely fundamental level, the game lacks a lot of menu functionality, including any sort of controls screen. For those who use a supported controller, like I predominantly did, this isn’t the biggest problem since learning through a little experimentation is easy. For those using a keyboard, however, it’s a bigger problem due to an awkward control layout and an inability to remap the keys. While I can appreciate a game trying to make the player figure things out on their own, there’s a line between not leading them by the hand and simply not giving them the basic tools to succeed. It’s a real problem when players are forced to resort to the game’s Steam page just to find out how to play the game. Meanwhile, the Escape key seems to have never been programmed, so players using a keyboard seemingly can’t even access the menu. 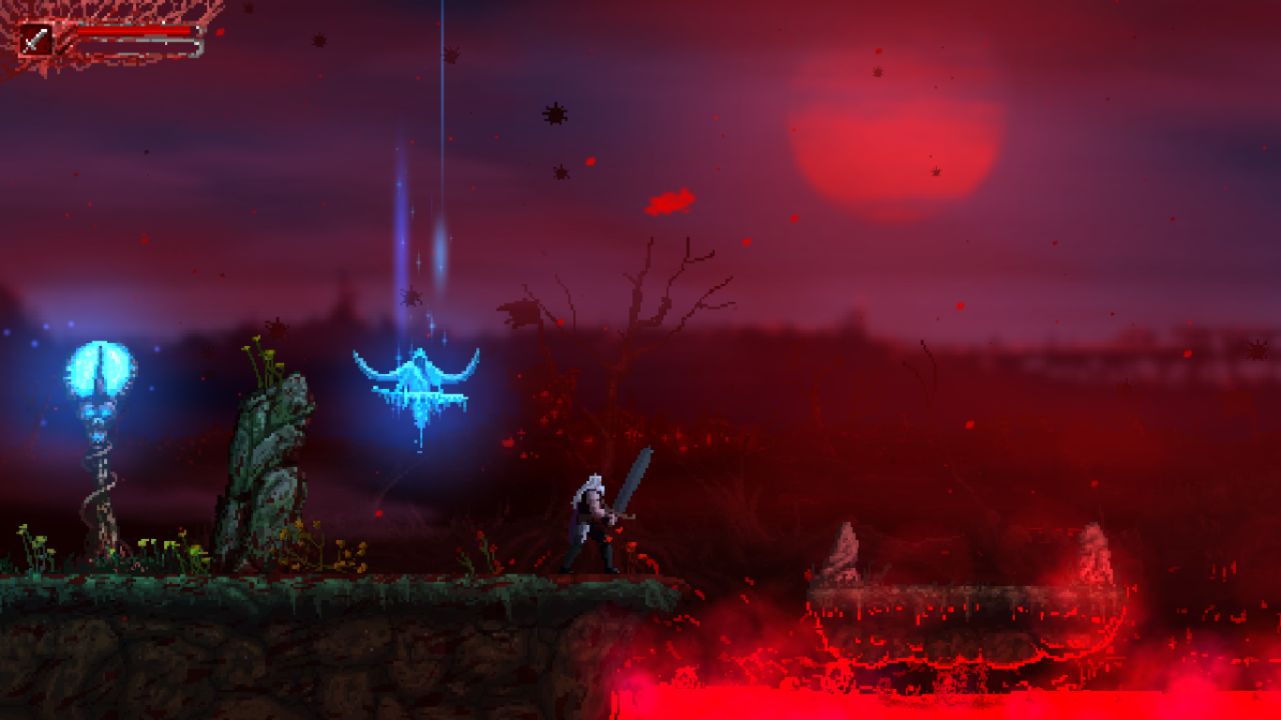 While these problems can be summed up to sloppy execution of Slain!’s overall presentation, the game’s gameplay and combat, on the other hand, is an absolute mess of its own. Every level is filled with monsters that approach the player in a slow and monotonous pace. When the two meet in combat, it’s a sheer battle of attrition with both sides hacking away at the other until either the player or enemy is dead. And after that, it’s rinse and repeat for essentially the entire game. Whether you’re talking the most basic enemy, a more difficult one, or one of the game’s actual bosses, there is very little strategy that ever comes into play. This back and forth slashing is ultimately the tried-and-true method of combat, and after dealing with the fifth wave of enemies, it becomes very unsatisfying and boring.

There are three mechanics that try to add variety, but all are significantly flawed. Bathoryn can dash backwards in an attempt to avoid incoming attacks, but the hit detection is so off-center that it often feels pointless to attempt. Plus, there’s a delay in the movement that makes it hard to time effectively. There’s also mana which adds a ranged attack to your arsenal, but other than that advantage, it offers no real difference to the basic melee attack in that it’s a battle of attrition to see who falls first. The mana’s special strike is useful for clearing a screen full of enemies, but again, you’ll have to visit the game’s Steam forums just to figure out how to actually do it. This smattering of issues is just a sample of the mechanics that don’t seem to work appropriately in Slain! It all points to what can only be described as a gameplay system that’s flawed at its core.

Slain! is clearly meant to be a challenging game and sets that vibe as early as your first death with the titular message of “You’ve been slain!” Although, even with that mindset, the game’s difficulty lacks any basic consistency and instead is much more of an ebb and flow. Furthermore, I wouldn’t necessarily credit the game itself as being what’s truly challenging. That honor (or in this case dishonor) instead mostly goes to the game’s frustrating gameplay and other poor design decisions. The game’s crouching position is meant to provide a means of defense against incoming enemy projectiles, but instead offers the ultimate way of breaking the game. The range of Bathoryn’s attacks in this position reaches so far that enemies can’t even inflict any damage. Not only does this work against the ordinary waves of minions, but also against bosses, where it’s possible to make it through the entire fight while losing very little to no health. By the time I reached the end of the game, I was utilizing this strategy against every enemy I encountered. Not because it was too difficult to do otherwise, but because it provided a means to pass through the grind of each battle in a much more bearable way. 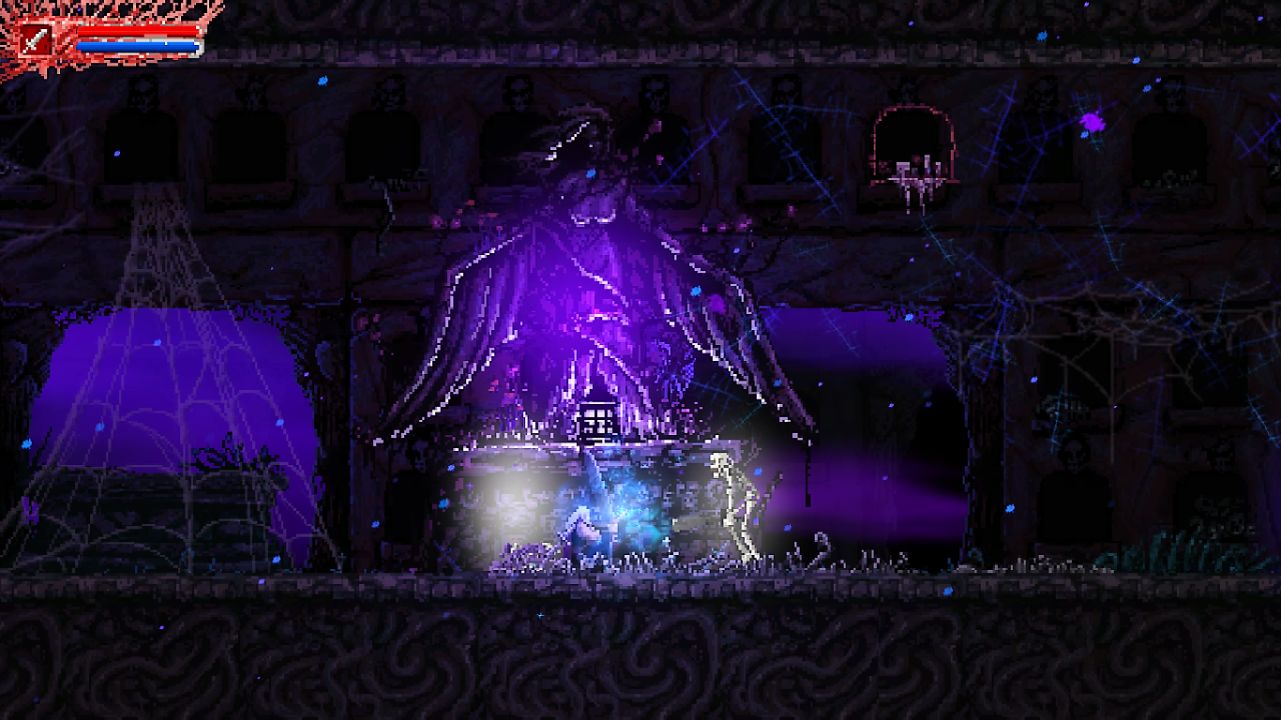 In many ways, Slain! feels like a game that just isn’t finished. Aside from the strange presentation issues and flaws in the gameplay, other backend items, like achievements, are not functioning and the Steam trading cards are not available despite being advertised otherwise. Slain!’s final boss fight is also one of the most bizarre endings to a game, and I say that because the fight doesn’t actually take place. Without giving too much away, there is a pretty in-depth buildup to a showdown with the main antagonist, but after a short sequence of dialogue, the game just ends and rolls to the credits. Except the credits didn’t actually roll and I was instead left with a black screen that remained until I closed the game out. Thinking that I must have missed a step before tackling the final boss, I went back through some of the previous areas again, but wound up with the same results. Honestly, it felt as if that chunk of the game had just been removed or left out completely.

While Slain! absolutely looks the part of what it’s described to be, its execution is just a mess. The successful Kickstarter project was, by my count, delayed or given a new release date five different times and it feels as if the game was pushed out the door in order to avoid another delay. While the developers have already announced plans to patch many of the game’s problems, I feel that many of Slain!’s faults lie in the core of its gameplay. And that is not something a simple patch can fix. Ultimately, Slain! is one of the bigger disappointments so far in 2016.

Our ratings for Slain: Back from Hell on PC out of 100 (Ratings FAQ)
Presentation
70
Slain! both looks and sounds like the heavy metal world it was meant to be. Strange omissions in the menu, such as a control screen with vital information on how to play the game, are part of the sloppy execution of fundamental parts of the game.
Gameplay
30
The combat revolves around the same monotonous battle of attrition, whether with melee or ranged attacks. Using the crouched position allows the player to exploit the game, breezing through some of the toughest enemies without the loss of much health.
Single Player
35
Most of the game’s dialogue is very awkward for the setting, almost trying for comical relief, but failing to hit. The game ends on a "To be continued" type cliffhanger and robs the player of any sort of climatic final boss battle fight and conclusion to the story. Slain! can be finished in about five hours, and there is little reason to return a second time.
Multiplayer
NR
None
Performance
40
Various bugs affecting the A.I. of enemies, such as attacking the empty space in front of them as the player approaches on a completely different level. Other issues, like the credits not rolling at the end of the game, are examples of hiccups that frequent the game.
Overall
30
Despite a promising heavy metal vibe, Slain! is a mess of errors that I fear will not be adequately addressed no matter how many patches are thrown at it.

Slain: Back from Hell 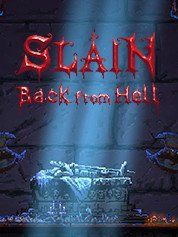