The dynamic duo returns to save the galaxy. Again.

The original Ratchet & Clank is often credited as one of the best action 3D platformers of its era. It went on to create a long lasting franchise since its debut in 2002, and albeit not all entries have been well received and not every game was developed by the original makers, the legacy of this series is firmly engraved in the minds of many PlayStation owners. The creators, Insomniac Games, have decided that it was time for a comeback, and with the release of Ratchet & Clank on PlayStation 4 this week, they have created a solid remake that has the potential to breathe new life into the series. 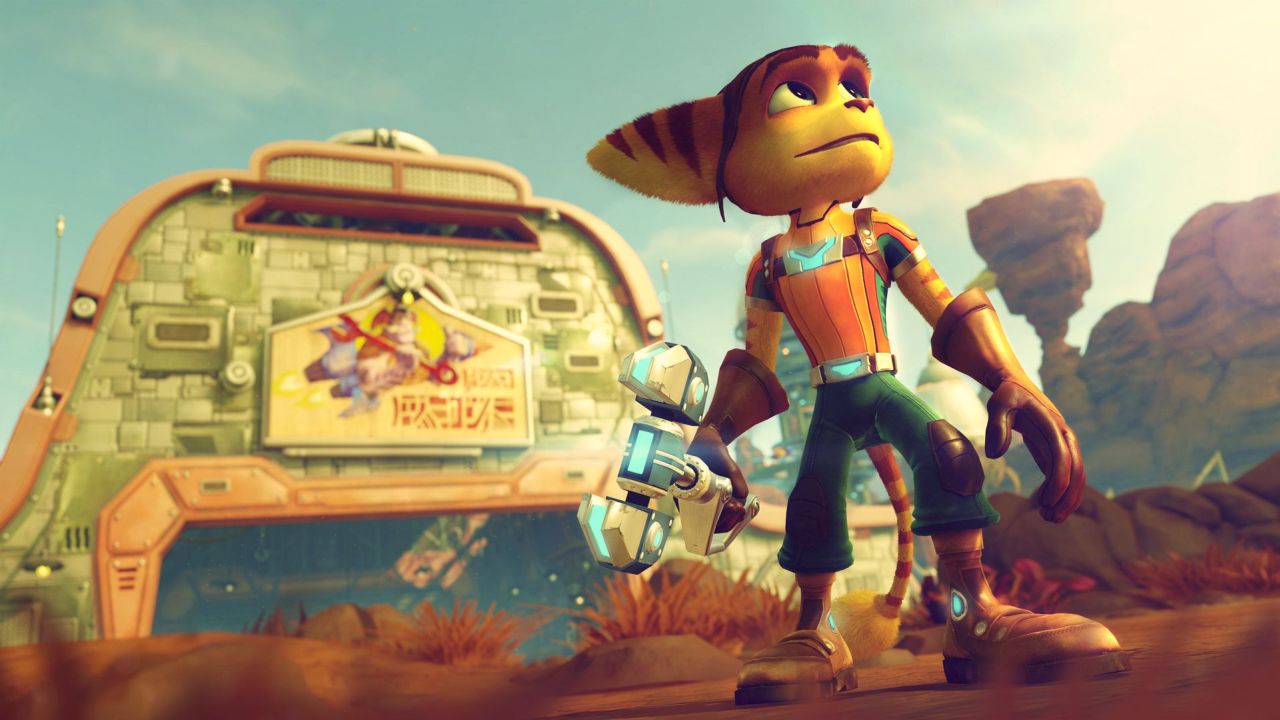 Ratchet & Clank on PS4 features a story that follows fairly closely to that of the original, but is also tied together with the feature film of the same name scheduled for release later this month. It's also important not to confuse this new release with the port of Ratchet & Clank HD that was released on PlayStation 3 as part of the Trilogy Collection around four years ago. The PS4 release was built form the ground up, and this means long-time fans will be familiar with some of the events and characters, but there is still new material to look forward to.

The story follows Ratchet, a Lombax mechanic on his quest to become a Galactic Ranger. Though he passes the trial, his membership is denied by Captain Qwark who does not want to be upstaged by the new recruit. Ratchet returns home, and soon comes across a small robot that he names Clank. Together, the duo are quickly involved in an intergalactic conflict – the Blarg are looking to build themselves a new planet because their current home world is too polluted. Their plan is to destroy other planets and then use the pieces to put together a new world for themselves. Clank just happens to hold key information for this sinister plot, and so Ratchet sets out to prevent the coming destruction.

As mentioned, there are new elements to the story that help the game tie into the film, but events also mirror those of the 2002 game. While it’s still a solid narrative, it’s a bit disappointing that the developers did not take this opportunity to flesh things out a bit. The introduction to our main heroes is very brief, and most of the side characters barely make an appearance. It would have been nice to spend a little more time getting to know these alien worlds and creatures, for the uninitiated players. Some animated cutscenes are used (possibly taken directly from the movie), making occasional story bits feel disjointed as the game comes dangerously close to becoming a “movie adaptation” rather than a standalone experience. Thankfully for most of the time, in-engine cutscenes are used to move the plot along and they are more fitting. 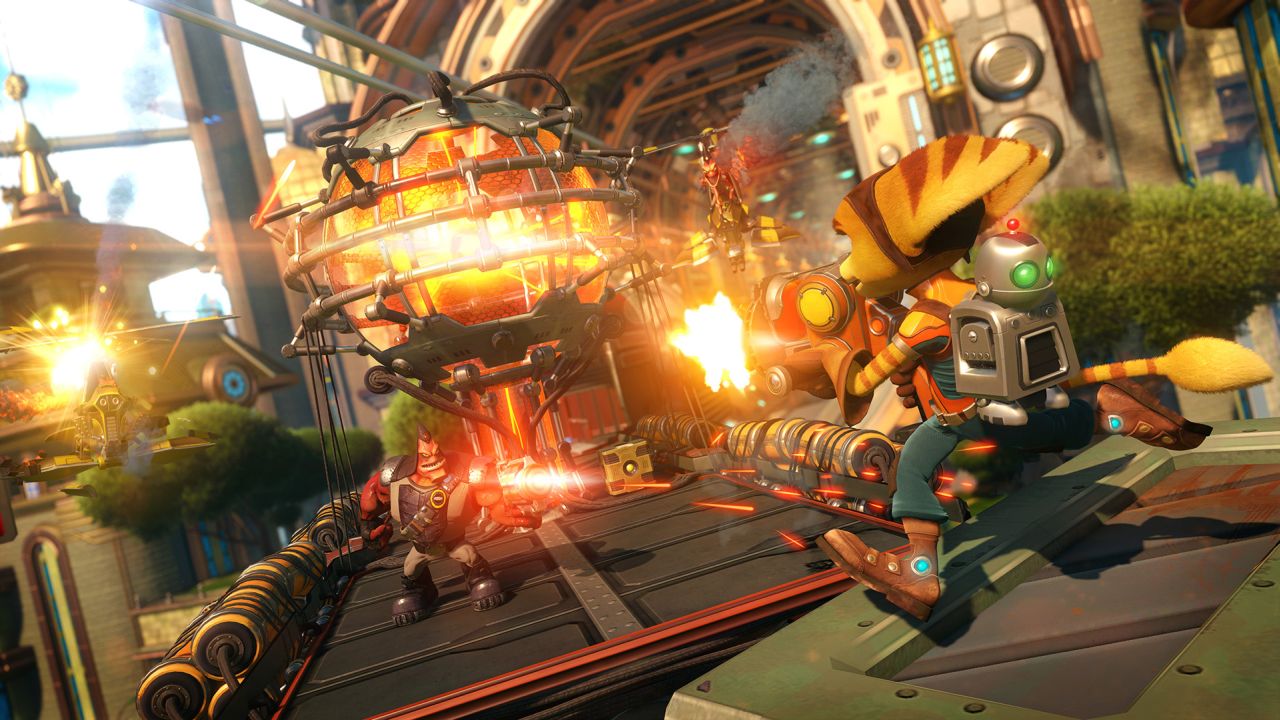 Similarly to how some of the story elements have changed but the greater adventure remains familiar, the gameplay and level design have also been updated. R&C is still a third person platforming game that features plenty of jumping, shooting, and bolt collecting across a series of planets. Many of the elements can be compared directly to the original – the enemy designs and animations, use of infobots, flying sections or hacking minigames. Some levels play out nearly identically, though of course the environments and enemies have been touched up. For example, making your way forward along a moving skytrain, or escaping a flooding tunnel, will bring back memories of the original experience. And while some may consider this lazy, it couldn’t be further from the truth – instead, this is a testament to how good and seemingly timeless the original level design was.

The heroic duo will travel across multiple planets, featuring new and returning locations. Players often have a choice of one or two different planets to explore next, giving the campaign a tiny bit of non-linearity. The planets feature different natural environments and enemies, and occasional hidden areas and optional objectives. Players can return to the previously visited planets at any time – and may need to, once you’ve got the appropriate gadget to access certain areas. Your gadgets include series staples such as grind boots to ride rails, a swingshot to cross gaps, a hoverboard to participate in races, and a hydro displacer to solve puzzles. The most entertaining gadget is the jetpack called Thruster-Pack, letting you soar high above the ground and traverse long distances; it feels very freeing. As with all gadgets, the jetpack can only be used in certain locations – notably, it is a key tool during a couple of boss encounters, which makes for entertaining multi-dimensional shootouts.

Ratchet controls very well, letting you aim with ease and move with precision. Blasting enemies with everything you’ve got never gets tiring or repetitive. Your weapons arsenal is diverse as has become the staple of the franchise, featuring a variety of different custom weapons from the original game as well as those that followed later. From the powerful Warmonger rocket launcher, to the amusing Groovitron that forces enemies to dance, there is plenty of choice. Given the limited ammo capacity, you’ll swap between weapons often, prompting variety during action. A lot of guns are useful – like the helpful and humorous Mr. Zurkon deployable sidekick, or the explosive Fusion Grenade. Others are less potent, especially during the game’s late chaotic sections; the Pyrocitor flamethrower isn’t versatile enough, and the brand new Pixelizer that transforms enemies into 8-bit models doesn’t have much impact. 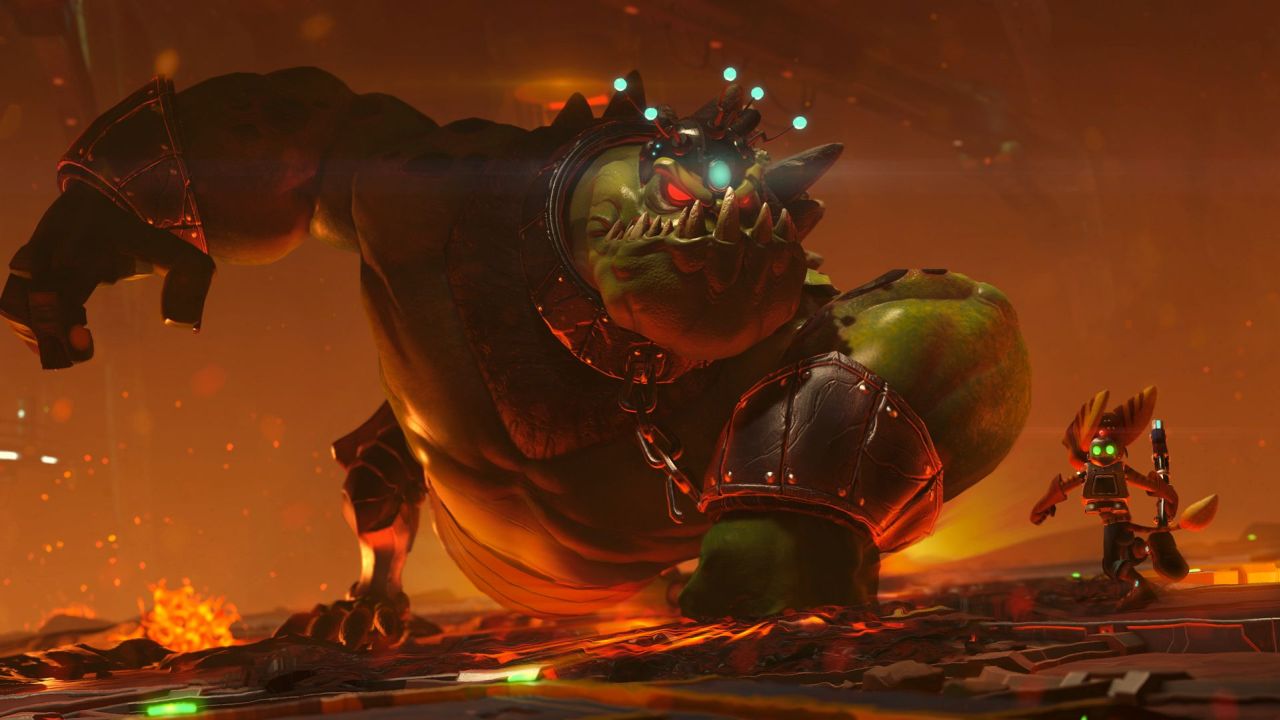 Each weapon will level up as you use it to defeat enemies, adding more damage, but players can also choose from various upgrades using Raritanium crystals. These upgrades add a variety of benefits, like increased ammo capacity, area of effect, or rate of fire. Each improvement costs one Raritanium, and they are laid out on a hex grid – purchasing all upgrades around a certain area can unlock further bonuses for the weapon. To unlock the weapons in the first place (and buy ammo), you’ll need the classic R&C bolts as currency, dropped by enemies and found inside smashable objects. Players should be able to purchase most of the weapons and upgrade a decent number of them by the game’s final battles, to face the tougher foes.

Outside of the action-packed moments, you’ll be solving the occasional puzzle or exploring. While players can still hunt for hidden golden bolts to unlock bonuses and cheats, they should also be on the lookout for holocards. Cards drop randomly from enemies and can also be found across the planets; there are a number of sets with 3 cards in each set, and completing the set usually grants a passive bonus – higher chances of Raritanium drops, more bolts, and so on. Completing a weapon set of cards unlocks a special version of that weapon to use in Challenge mode. Challenge mode, unlocked after completing the game, is what the developers call new game plus - letting you play through the story again while keeping all weapons and upgrades.

Ratchet & Clank looks rather wonderful on the PS4. From the explosive mayhem on land to the underwater exploration, the sharp textures and vivid color palette make the game quite pleasant to look at. The polished visuals and smooth animations perfectly complement the artistic direction, all running at a steady framerate and 1080p resolution. Only during the most effect-heavy battles did the game slowdown a tiny bit, but it was rare enough to ignore. As mentioned earlier, the in-game cutscenes are well executed though they tend to clash a bit with the animated ones; both look rather great however. The music and voice acting is similarly on-par, offering many pleasant tunes and lots of puns and humor that the series is known for. 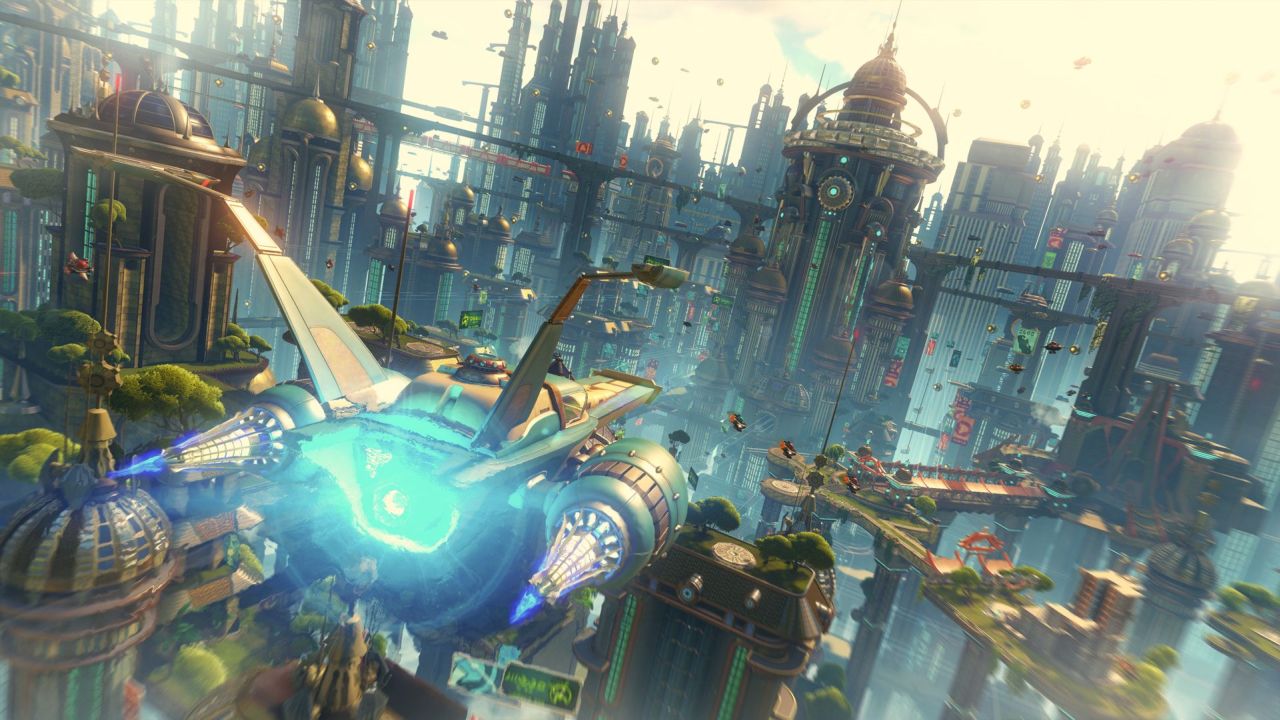 While it's rarely a good idea when games (or any movie, book, etc) re-use the same name, the PS4 version of Ratchet & Clank may have a convincing case. It is not a reboot or a re-skin, but rather a recreation of the original. While it can be closely compared and contrasted, it would be disingenuous to criticize Insomniac Games for choosing to re-do their 14 year old game with some of the same design elements. The new R&C is by all means a modern title, with fleshed out gameplay mechanics and solid level design. It plays and looks very well, and aside from a few story qualms, it is an overall enjoyable experience. The $40 asking price seems perfectly fair for the game’s 8 to 10 hour campaign, despite the fact that you may have seen a lot of this a long time ago. What was once old is new again, as PS4 Ratchet & Clank offers a complete remake of the original experience that started it all for this franchise.

Our ratings for Ratchet & Clank on PlayStation 4 out of 100 (Ratings FAQ)
Presentation
86
A vibrant visual experience complemented by good sound design.
Gameplay
80
Both the action and the platforming are mechanically sound and accessible.
Single Player
74
Although you may have seen these levels, weapons, enemies and locations before, there is enough polish and new content here to make the journey feel fresh again.
Multiplayer
NR
None
Performance
88
Rare framerate dips, runs fine otherwise.
Overall
80
Whether or not you played or remember the original, Ratchet & Clank on PS4 is worth picking up for anyone interested in great looking action, occasional puzzles and platforming. 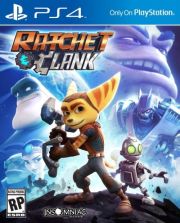 All videos for Ratchet & Clank (3)
Advertisement ▼