An untethered and harmonious space adventure

The first extravehicular activity (EVA) occurred back in March 1965 when Alexei Leonov left his spacecraft and floated on the end of a five metre tether. Leonov drifted in space for around 12 minutes before pulling himself back to the space module. There was a problem—the internal pressure of the Cosmonaut’s spacesuit made it too rigid to move through the small hatch. He needed to manually bleed oxygen and enter head-first with just 40 minutes of breathable air remaining. None of this was televised, replaced instead with Mozart’s Requiem. Fortunately, Leonov squeezed back inside and landed safely on Earth. ADR1FT is a game almost entirely about EVA, although without a tether like the one that prevented Leonov from floating away. Somewhat like the pioneering spacewalk, ADR1FT has players utilizing limited oxygen reserves to navigate around a damaged space station. Although the game supports Virtual Reality headsets—it launched alongside the Oculus Rift—this review does not pertain to the VR experience. 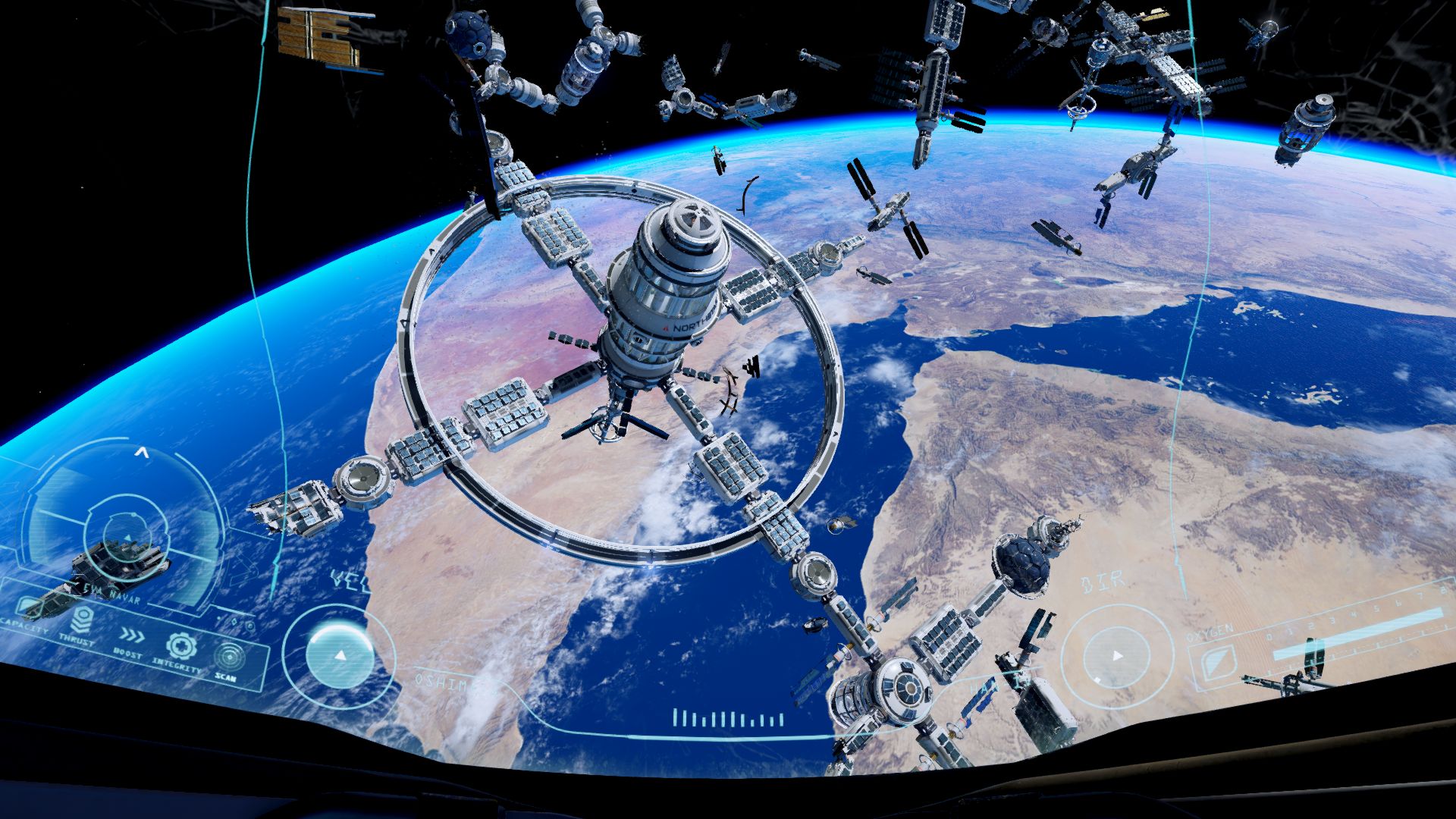 The Northstar has seen better days

Set in 2037, ADR1FT begins with players regaining consciousness near the massive Northstar IV space station. The Northstar consists of four major sections connected to a central ring-like hub. Well, they were connected, until a catastrophic event damaged the modules and exposed their contents to the vacuum of space. The damaged pieces are floating nearby, locked in orbit around the Earth like the rest of the station. Getting inside the mostly-intact central hub is the first goal, and then players must begin emergency evacuation procedures. With a leaking suit and oxygen needed for thrust, collecting oxygen canisters and refilling at stations is the only way to make it home.

Players assume the role of Alex Oshima, commander of the Northstar and leader of its small crew. As you navigate the various sections of the space station, the circumstances preceding the devastating event are revealed via audio logs and inter-station emails. The story focuses more on the personalities of the crew rather than the disaster. One crew member, estranged from his daughter who sends him Beethoven sonatas, hopes to return to Earth and strengthen family ties. Another experienced astronaut feels like an alien on Earth and finds peace in the isolation of space. These individual stories make for a low-key narrative, and offer serene background noise. ADR1FT carefully subverts expectations when it comes to the story, both in delivery and final resolution. 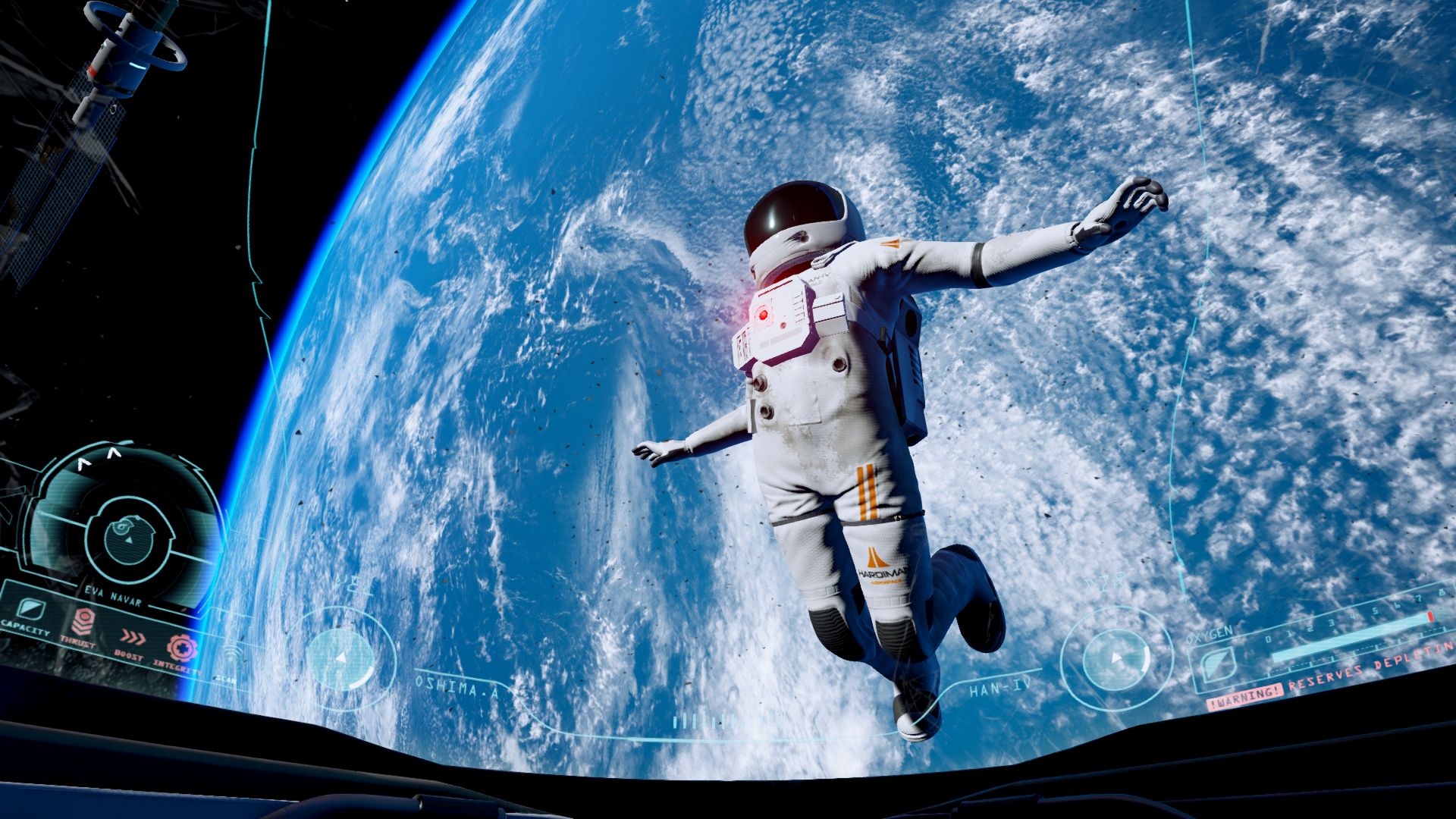 Some of the crew did not make it

Systems are offline across the Northstar; you will need to restore life support, communications, power management and propulsion to return to Earth in an evacuation shuttle. Restoring these systems involves collecting Cerebrum cores in each part of the station and taking them back to the central hub.

Like a walking simulator, the adventure is more about moving through a world. Instead of walking, you will be floating with six degrees of freedom—movement in three dimensions and full rotation around all axes. Six degrees of freedom has been used in games for decades. Descent was one of the first to utilize such a movement system back in the mid 90s. Much later, the thematically similar Shattered Horizon gave astronauts weapons and told them to shoot each other while floating upside-down. Space is a particularly tricky location when it comes to orientation because distances are hard to interpret against the never-ending blackness.

Fortunately ADR1FT minimizes disorientation problems using clever design. Initially this is done by easing players into the freeform navigation by making the first parts fairly linear. Modules are fractured from one another, but space junk and oxygen canisters form breadcrumbs. Later, the placement and orientation of the station provides a general overview of upcoming areas. Each section increases the navigation challenge by placing modules further away, upside-down or sealing doors to force an alternate route. Sometimes tasks can be completed in a non-linear fashion which is both liberating and confusing. A map on the HUD shows objective markers, but it only displays two dimensions and therefore requires odd rotations to be useful. The gradual increase in navigation challenge provides balance and there is minimal distraction to hinder traversal. 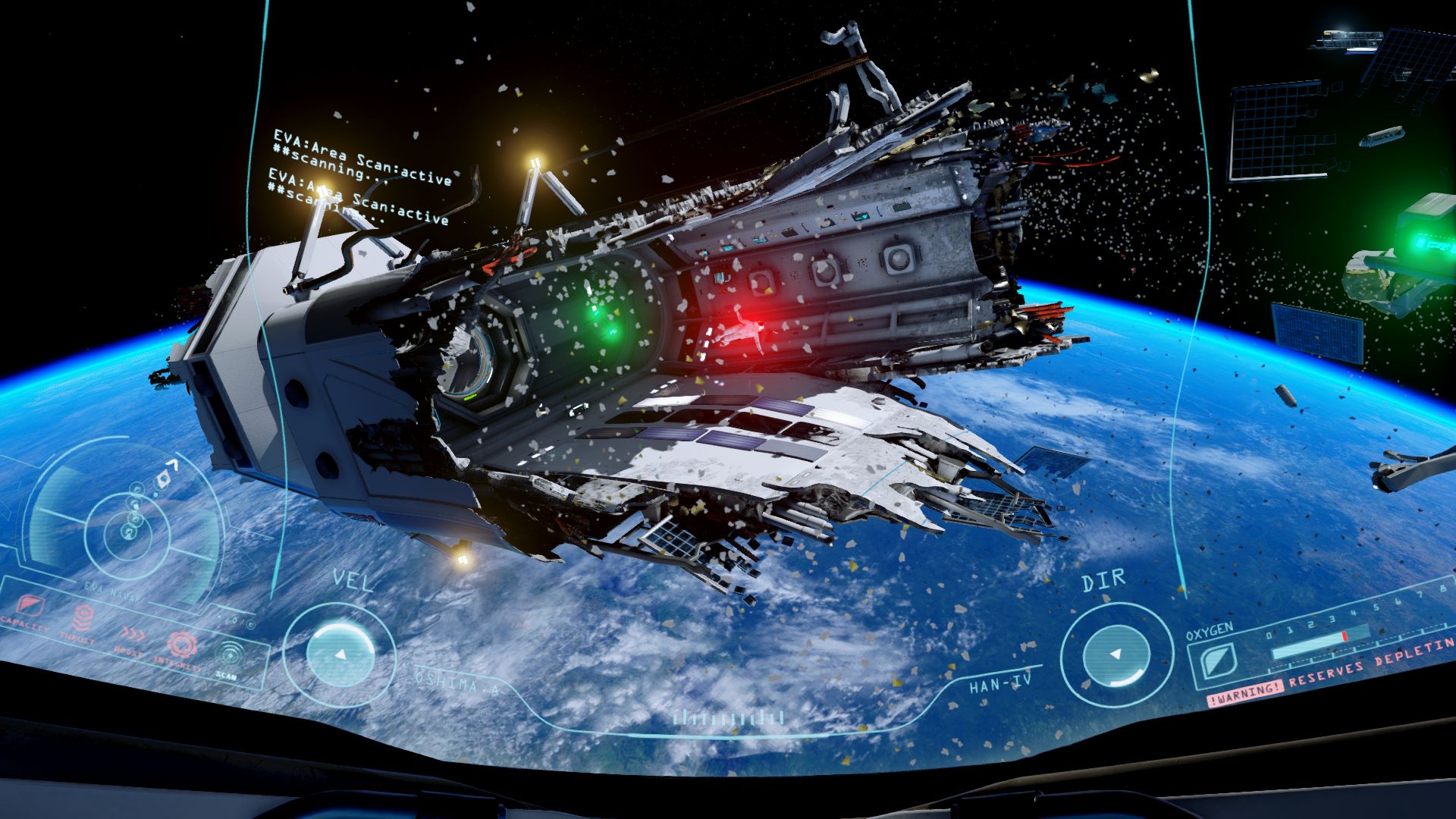 Controls are intuitive, as the mouse and keyboard allow quick access to all movement and rotation. Rotating forward/backward and turning left/right are the only movement types that require no thrust. Movement using the oxygen-powered thrusters is slow. A boost mechanic provides a brief increase in velocity, but speed is reduced once deactivated. Boost is never needed and is barely faster than regular thrust. Even with a fully-upgraded suit—applied automatically when completing objectives—the general floating pace might be too slow. But the speed is calming, giving ample time to admire the view and cogitate.

The slow thrust speed prevents undue collisions with bulkheads and other space junk. It allows easier collection of floating personal logs and oxygen canisters. Nevertheless, there will be some awkward moments encircling an object trying to grab hold of it with contentious momentum. Slamming into space debris is barely punished, resulting only in a distorted HUD and partially-cracked helmet. Both can be temporarily fixed at repair stations. Despite numerous attempts, the suit could not be broken through forceful collisions. The main thing to worry about is oxygen consumption, and sticking close to modules reduces leaks to keep players from wandering too far, or accessing other areas of the station before it is time.

There are not many hazards to face when navigating the Northstar wreckage. Electrical wires and conduits are the biggest threat, and they will shunt you and subtract a huge chunk of oxygen. Larger modules can knock Alex off course with rotating solar panels or spinning components. Occasionally these hazards can be circumvented entirely, by merely consuming extra oxygen and going the long way around. Some cannot be avoided, situated on the only path to the objective. If you perish due to lack of oxygen, a generous save system will place you nearby. 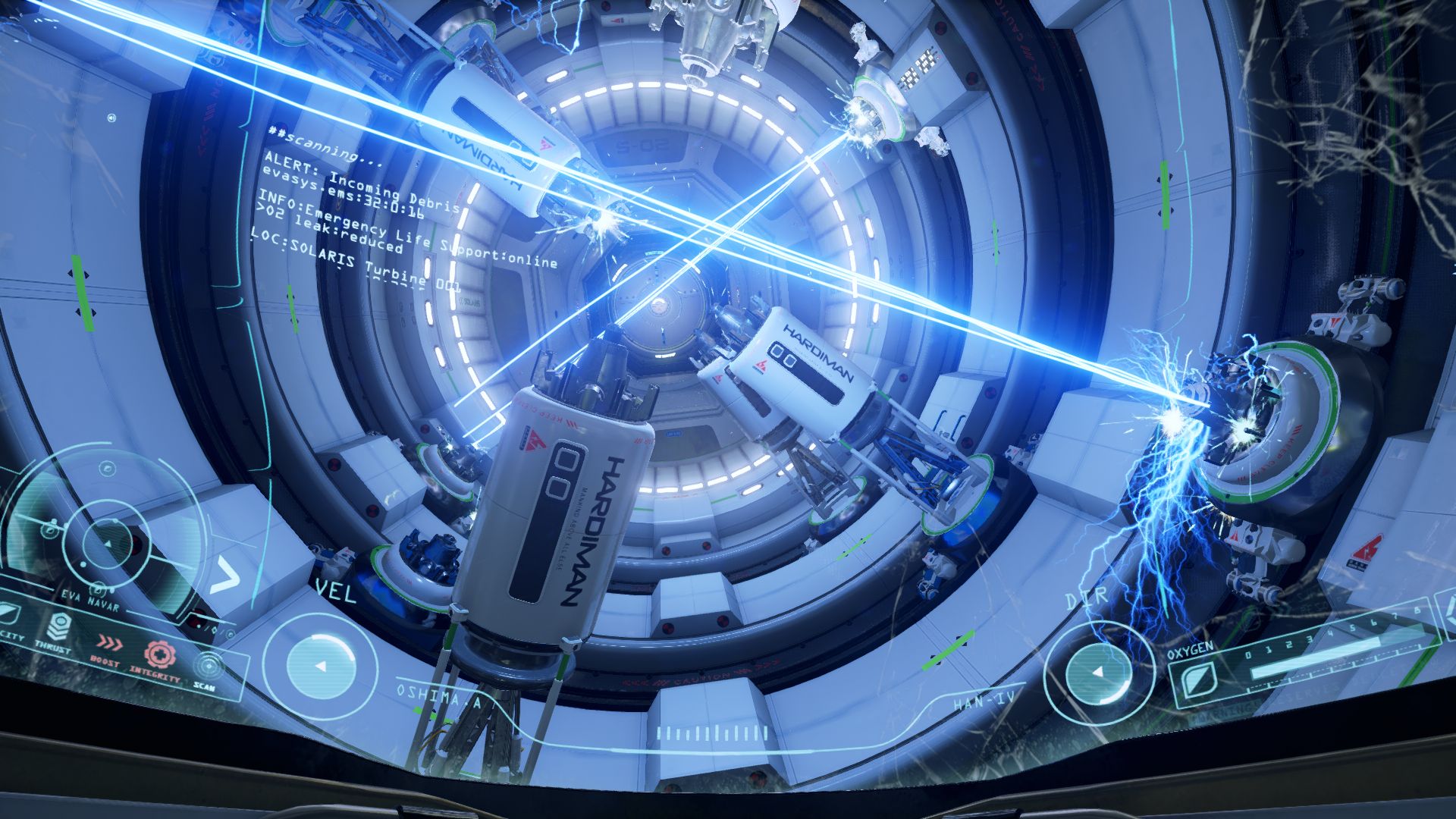 While the save system is reasonable, not all objects have their states preserved correctly. Oxygen canisters regenerate in the same locations, which makes sense given their importance. But crew logs also returned, which is not quite as logical. When audio devices are used, they vanish off the HUD and are thrown away. But they return to nearly the same place when revisiting an area later. Returning through corridors and seeing an unused audio log in a previously-visited location causes bewilderment. Some of the crew logs were also bugged, maintaining their HUD icons after being used. The data modules collectibles and story-related mementos were permanently removed from the game world so it is a shame that audio logs did not function the same way.

The Northstar station makes good use of Unreal Engine 4 with only a few minor graphical issues. Textures are quite high resolution and the screen-space reflections look nice in the futuristic setting. Sunlight produces accurate shadows that look great across the station. UE4 is almost made for science fiction and the design of the Northstar is consistent and detailed. It is a shame that suspended water droplets did not interact with the spacesuit helmet. There were a few bizarre shadow glitches around some of the translucent hatches and certain modules flickered at long distances. Neither issue was common enough to detract from what is a great looking game. 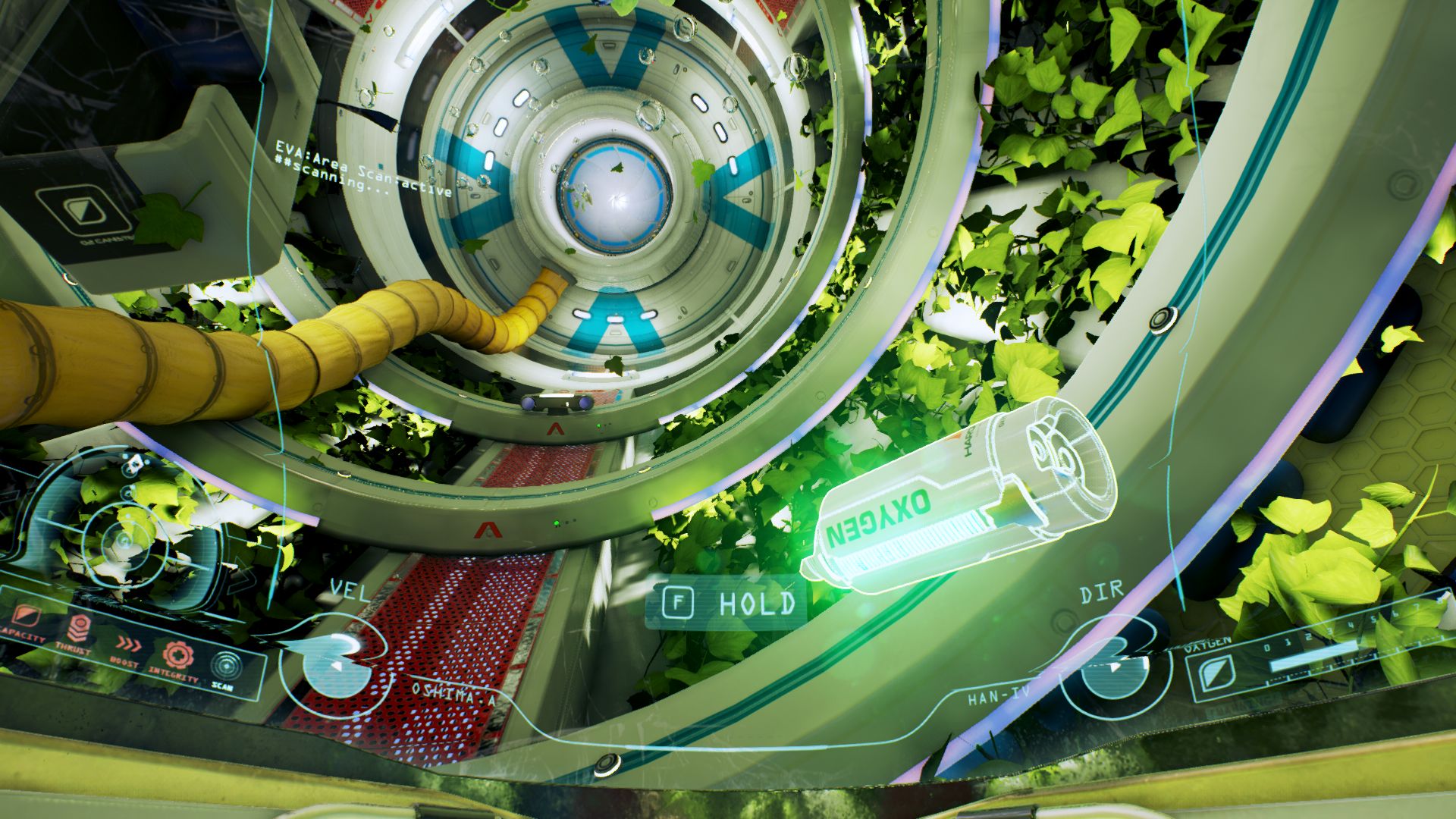 ADR1FT is a deliberate and pleasant floating simulator that maintains rigid focus on free movement. The navigation with six degrees of freedom can be confusing but the game cleverly minimizes problems. Even the simple narrative meshes well with the theme and game speed. Like the first spacewalk in history, it is not without problems; in this case, the simple and repetitive tasks, bizarre audio log mishaps, and occasional disorientation. It might be too slow for some, but the spacewalk experience is soothing even under the constant threat of suffocation. Listening to a Beethoven sonata as you drift away from the safety of a space module is relaxing and facilitates introspection. ADR1FT’s careful design and basic mechanics will earn lasting respect after you come back down to earth.

85
Framerate is consistent and smooth. Controls are easy to learn. It has some Audio log bugs. VR not tested.
Overall
77
ADR1FT uses simple mechanics to create a subdued and freeform space journey that is worth experiencing. 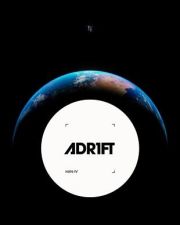 All videos for Adr1ft (1)
Advertisement ▼