A deceptively deep rougelike as engaging as your patience will allow

It is always refreshing to experience a game that plays by its own rules and strays far from the norm when it comes to both style and substance - at least in the context of the modern gaming scene. ADOM: Ancient Domains of Mystery is one such game. It is simultaneously an enthralling and maddening experience that is brimming with more statistics and probability equations than baseball, and contains rich content and a colorful narrative that is in many ways as epic as a Final Fantasy or Elder Scrolls title. Yet, ADOM is a frustrating paradox of virtually endless gameplay and exploration that gets largely handcuffed by a limiting firewall of permadeath - an infamous feature shared by most from the largely niche genre known as the “rougelike.” This means a single death will result in a complete wipe of your game, forcing you to return to the drawing board and undergo the demoralizing process of starting all over again. 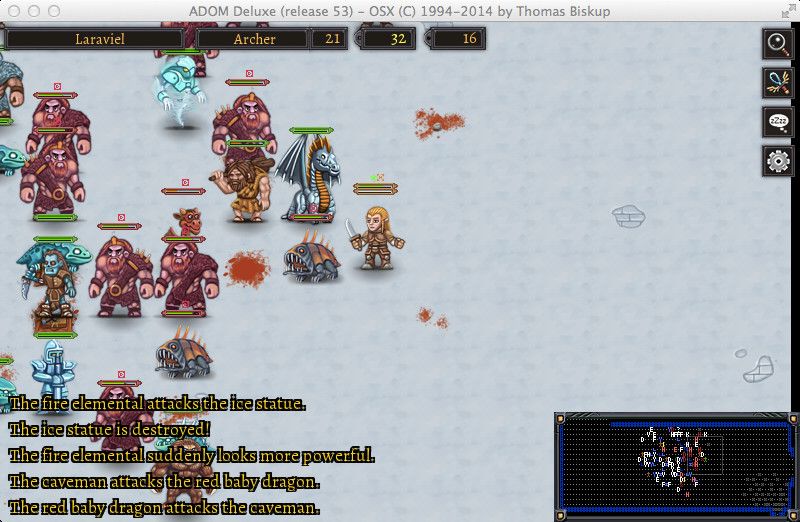 Despite the endless frustrations of dedicating a great deal of time and effort building up a seemingly unstoppable elementalist, or a speedy and evasive assassin, only to see them abruptly meet their bitter end, I generally felt oddly compelled to jump back on the horse and give it another go. And while this may speak more to my own stubbornness and determination, it perhaps equally speaks to the quality, as well as the sheer breadth of content ADOM provides for those who remain dedicated to its cryptic and unforgiving gameplay. The game proves to be an RPG that simultaneously tests your skills, your patience, and your wits, dishing out the most disheartening of penalties to those who fail, but on the flip side, offering a nearly unmatched sense of accomplishment to those who choose to answer the call.

Upon diving into ADOM on Steam, you will very quickly notice that this is no typical RPG, despite the deceptively cartoony and simple-looking graphic tile-set this remake utilizes. Once upon a time though, during the game’s original iteration for the Linux and Amiga back in the 90’s, a now-ancient graphic style known as ASCII was used, providing the absolute minimum of visuals. Imagine playing what essentially boils down to a computer program, from which all elements within the game are merely represented by a variety of colored letters, numbers and symbols. While this concept may seem absurd and archaic to us coming from the modern day context of insane hardware horsepower and flashy graphics that are approaching photo-realism, at the time this was a viable option for experiencing certain types of games. In fact, there are still some diehards that swear by such methods, as its minimalist approach allows for the endless potential of one’s own imagination to fill in the gaps, much like reading through an epic fantasy novel. As a result, an open-ended RPG/rougelike such as ADOM offers as much of an endlessly rich and rewarding experience as the gamer’s own imagination, as well as determination, allows for.

The charming and simplistic pseudo 16-bit style that has been slapped on to replace the endless jargon of symbols certainly gets the job done, and instantly makes a niche title more palatable to the common gamer. The colorful and detailed sprites go quite nicely with the game’s medieval fantasy flavor. Unidentifiable symbols now emerge as more visually interesting enemy and NPC sprites, and scatterings of blue and green characters are now fleshed out as grass and water tile sets. At the same time, these cutesy graphics almost act as a sort of contradiction within the game, as they tend to undermine the complexity and depth that stirs under ADOM’s cryptic and difficult-to-crack exterior, and clash a bit with its gritty gameplay and dark atmosphere. 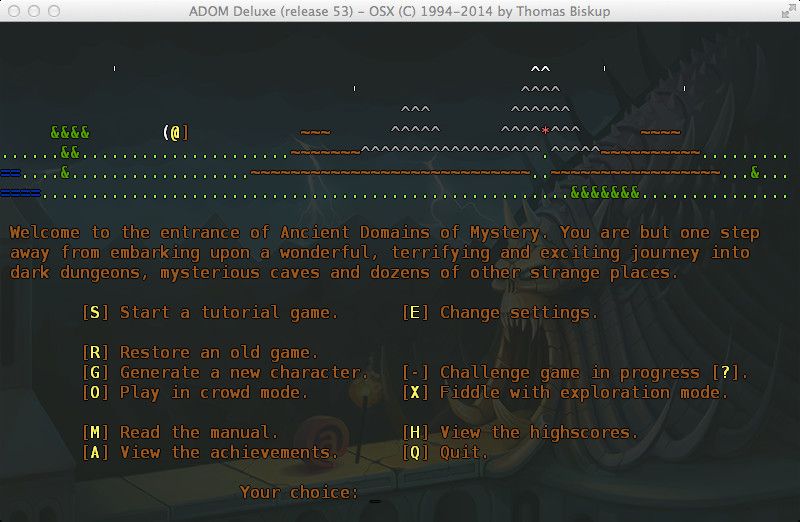 To go along with this more modern and casual-friendly visual style, most of the game’s endless list of possible commands can now be engaged by relatively simple menu scrolls and mouse clicks. You can still chose to play the game the knitty-gritty way by entering the endless series of commands; which allow everything from movement, to item usage, to searching for doors, to kicking objects or enemies. You can even be instantly transported back to the good ‘ol days of black backgrounds rife with the mostly indecipherable ASCII characters just by pressing the F10 button which, even if you have no intention on going through the drudgery of this old fashioned style, still comes in handy on occasion as a quick overworld map. While the laundry list of commands are still in place however, the new Steam version now allows the game to be played more like a traditional RPG, with a hint of point-and-click adventure and RTS in there as well. You can merely mouse over to a point of interest, and the game will generously present you with a list of possible commands.

Even with these more “hand holding” elements liberally placed in this modern rendition - which also include a somewhat convoluted and overwhelming tutorial as well as help menus - you will still find yourself spending a great deal of time just getting acquainted with the countless menus full of item/player statistics and keyboard shortcuts. Shortly after you’ve begun the journey, and spent a bit of time fumbling around with these elements, you will likely then find yourself playing around with random items and experimenting with cryptic mechanics. Next, you'll probably proceed to explore the shrouded world around you, or plummet into one of the massive randomly-generated dungeons, before promptly running into a monster that is well out of your league, or run into a deadly trap, before meeting your swift doom. Then you will wonder just what you did so wrong in the game to warrant such a quick end. Finally, after cursing angrily at the screen, you will feel strangely compelled to return for another run and more abuse. At least now though, you will possess a tad more knowledge which will help you to prepare better during the next run. The first few attempts at playing ADOM are not unlike dipping your feet into a scalding hot tub - it feels harsh and overwhelming at first, but little by little, as you begin to slowly submerge, you become more and more comfortable to the enjoyable experience it provides.

Unlike a hot tub, however, ADOM is far from a relaxing undertaking. It will require you to have your wits about you, and will often force you to think ahead several steps and weigh your options, like a game of chess. Do you proceed to the next level of the dungeon, or retreat towards the nearest town and stock up on food rations first? Should you put that earned stat increase towards increased agility, or spend it on literacy in the hopes that you can decipher that random spell scroll you scooped up earlier? Do you engage that intimidating looking enemy as you anticipate he will drop some valuable loot, or bypass him to conserve your power points for the upcoming boss? The game is absolutely rife with choices like these, each one branching out to further possible outcomes, and the constant threat of permadeath looming overhead adds further weight to these choices. Strategy and cunning is the key to survival in ADOM. The game is absolutely relentless, and can strike you down with one mere fatal error, causing you to constantly walk on eggshells during a seemingly hopeless journey for glory through the corrupt and violent world of Ancardia. 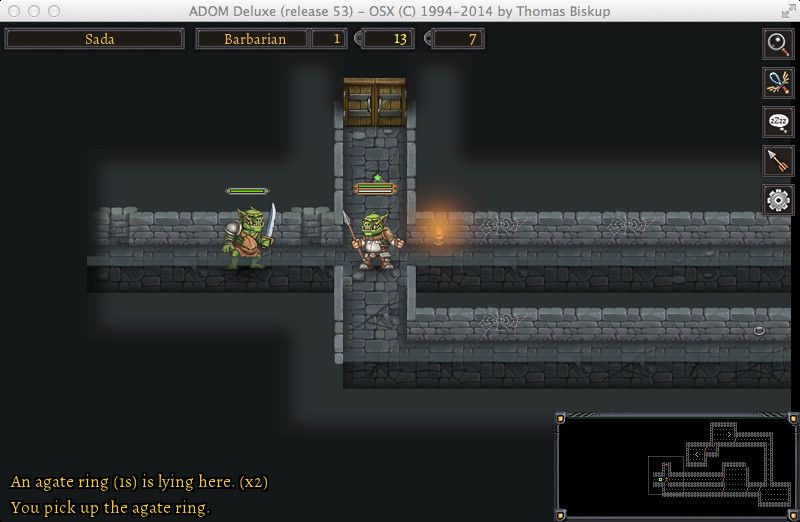 Everything from rigged doors, to starvation, to poison, and even sacrifices by crazed Chaotic NPC cultists, can bring your unlikely hero to an abrupt end. You can drown from poor swimming skills, run into an ambush of overpowered monsters (I’ve learned the hard way to stay away from the swamp), accidentally zap yourself to death by a wand or spell, or become randomly stuck with “cursed” or “doomed” items that will increase your likelihood of demise. Sure, you can perhaps be rid of the latter burden by utilizing the unique ability to pray or sacrifice to one of the various gods (which you can also utilize as a last-ditch healing move during the heat of a battle), but there is no guarantee they will assist your lowly mortal hero, and you may only succeed in angering them.

While these dangers certainly add to the adrenaline-pumping amusement and drama of this epic adventure, I couldn’t help but feel that the game is essentially rigged to work against you in some aspects. Even for the relentless roguelike standards, there are just too many ways to screw up, and many of them are seemingly outside of your control to anticipate, much less deal with appropriately. Even a seasoned ADOM veteran of many years will likely tell you that he or she still struggles to even come close to completing one of the many endings this game provides, because there are just too many ways to die, whether by personal neglect, or from a particularly unlucky sequence of events that they could not overcome.

To go along with the seemingly infinite amount of ways to be killed, and the countless paths that could lead you there, there are an absolute plethora of statistics, races, abilities, and even a series of zodiac signs to customize your hero with. All of these, in one way or another, provide your character with various strengths and weaknesses, and add to your list of contemplations and decisions to weigh right from the get go. Each class, race, and star sign comes with its share of benefits and blemishes, though some are more newbie friendly than others. There exist certain class and race combinations make for stronger characters, like a High Elf Healer or an Orc Barbarian, while others will prove to be less-than-compatible combinations which force you to truly earn your stripes to make any real progress. Some classes are more obscure, and specialize in non-combat aspects that may benefit at later stages in the game, such as weaponsmiths, farmers, and merchants. Even many of the melee classes seem to come with their share of dangers though, as I often ended up running into an overpowered enemy mob that completely kicked my teeth in before I even really knew what hit me. I found it far simpler to use the magic oriented classes, particularly the Elementalist, as it is one of the few that comes with spells pre-learned. You are also given carte blanche to stand back and zap, burn, or freeze your enemies into instant oblivion. This allowed for minimal risk, provided you keep a close eye on your power points.