A self-aware odyssey through the sinews of arcade hell

It used to be retro-style platformers. Now it's games that talk. With gaming obtaining more and more means to be considered an art form in its own right, the strand of hopeful releases that aim to skew our expectations by reminding us that oh yes, we're playing a videogame, is lengthening by the month. Artistic independence is tremendously wholesome for game culture, but it's awfully tough not to force. More often narrative suffers beneath the incalculable weight of self-consciousness, and it's rare that I manage to get my hands on a game that gets it right, without selling my soul. 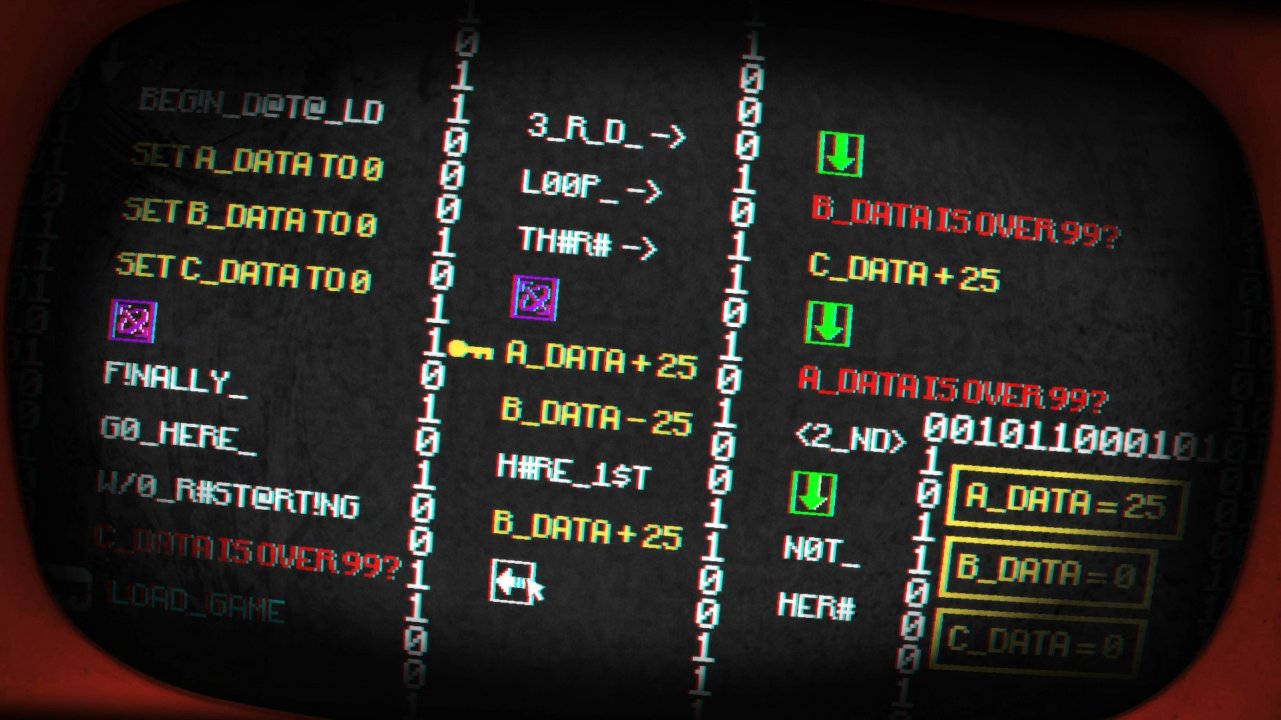 With Pony Island, I failed dismally. Not to say that Daniel Mullins Games gets games that talk wrong, but I did end up selling my soul. I slotted my digital consciousness into Pony Island's mechanical cosm like the cheap carnival token it was, and I'm actually rather excited about it. It's one of the most hypnotic games I've played of late.

Trapped in a cursed arcade without memory of having got there, you're birthed into a deceiving retro runner created by Satan himself. The King of Hell, it transpires, has a penchant for ponies - and he's using them to nab your soul. Encoded beneath a deliberately frilly facade, it's up to you to play your way through the game, locating bugs and hitches to hack your way to escape. It's a premise that might have non-players of the game crying spoiler-alert unto high heaven, but it's one of the few moments in Pony Island that doesn't come as a surprise. The game revels in its self-awareness from the beginning, and despite the laughably honeyed pretense, it ensures the satanic cracks beneath never fall complacent. The main menu itself is in on the joke; requiring you to fix its screwy options before gaining access to the main game - a wry precursor to the industry-jabbing, player-referencing bedlam that lies ahead.

Pony Island exists fundamentally on two interacting levels. On the one hand, you control a sketchy 8 bit pony in a schlocky rendition of a classic runner-platformer, frolicking over gates to reach the eventual finish line. Arcade sections start off excruciatingly dull - and it's entirely intended. My very first triumph mostly involved sitting virtually motionless, clicking the left mouse button to jump every now and then before attaining my goal. Of course, my efforts were nevertheless rewarded with an on-screen barrage of 'WOW!' and 'HUGE SUCCESS!'. I was the optimal player. 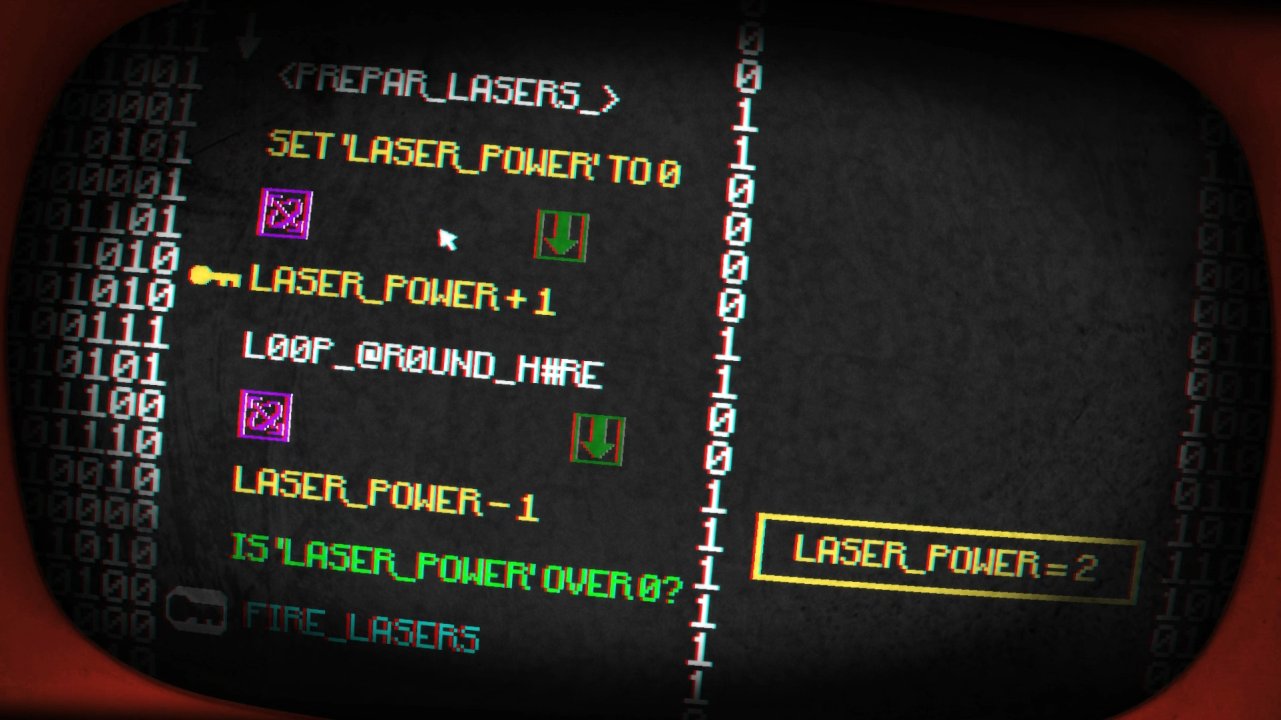 It is this contemptibly botched minigame that houses the puzzle dimensions. You're really the unfortunate schmuck trapped within the bowels of this accursed machine, and it's your job to hack your way out. As you canter through the pitiful platformer, you'll locate glitches and other weak points in the game to access user accounts, overload data and occasionally, communicate with other distant beings. Puzzles mostly revolve around dragging and dropping specialized icons into corresponding boxes, in order to guide a key to its required destination. It all sounds rather like your humdrum hacking game, but its swift, punchy introduction of new elements and story-driven add-ons does much to distance Pony Island from the archetypal puzzler. No solutions are truly mindbending, but their tapering level of intricacy generally keeps puzzling from erring into banality. Occasionally challenges outstay their welcome, with some of the later sections appearing overcomplicated and wavering on just long enough to feel drawn out. It's a shame, because the puzzles are such an important part of the game's overarching progression. They ultimately exist to serve the pivots of Pony Island's jittery narrative; when those are interrupted, the effect can be more exasperating than suspenseful.

There are even brief text-based sequences, that require you to manually type answers via clunky pseudo-Gmail messengers. Lending only a glint of agency to player reactions, these instances thrive largely on atmosphere. The concept of distanced communication is inherently mistrustful - and as I typed away my answers across the stretches of cyberspace, I couldn't shake the hunch that I was being lead astray. The atmosphere's faintly marred by the interface's simplicity, responding little outside the simple yes and no, but it makes for a refreshing break from more chaotic segments all the same.

Other sections are consistently surprising. Character is layered on thick, addressing the player directly whilst simultaneously reveling in its own technical weaknesses. My ventures into realms un-coded were met with swift tellings-off by the malevolent developer because the game 'wasn't finished yet', whilst other moments littered the screen with Lucifer's worries that his beloved creation might just turn out to be worthless trash. Beelzebub has feelings too, and it's played entirely for laughs. Whilst Pony Island could well be deemed pretentious and self-important in some ways, its commentary on the development process and the need to appease the player is cunningly funny here; something that makes its at times overbearing meta-awareness more palatable. It doesn't work because it's profound - it works because it's a gag. Despite the relative ease of the puzzles, the oppressive characterization can render even the smallest of Pony Island's successes satisfying. When you manage to hack lasers into your perpetually weeping pony sprite to decimate the oncoming goons of Lucifer, it's enough to make one laugh out loud in triumph, as you edge your way forth on the binary-bound path to escape. 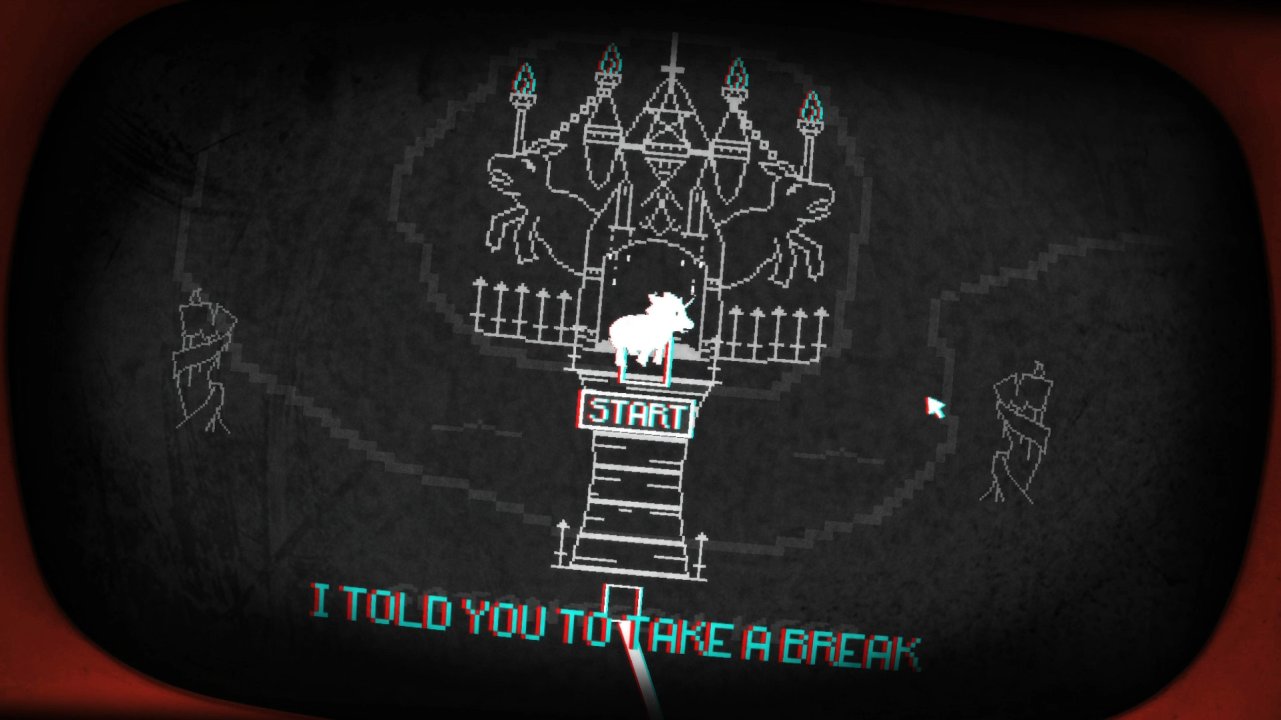 And savour the moment, because it'll last all of about ten seconds. Pony Island will mess with you, and it'll have fun while it's at it. You'll do exactly what is asked of you, before being punished anyway. All of this is laced with reflexive humour and diverse characterization, so despite its oppressive, greyscale world it instills a remarkable sense of determination. You're tantalized innocently further into the game, and frankly, you do begin to feel a little in over your head. The further I rummaged into Pony Island's twisted innards, the hazier became the notion of resurfacing, and the game's climax does a lot to preserve that.

Mentioning anything plot-wise is a sure path unto spoilerdom, and a lot of Pony Island's punch exists in areas I simply can't discuss without wild and deplorable guilt. Without giving the game away, even after the credits rolled and I returned back to my own, ponyless desktop, the distinct unease of the past few hours fermented on at the back of my mind. Still wavered the creeping notion that the illusion was still at play, that my work was not done and that all was not really well at all. Despite an ultimately linear progression, Pony Island kept me feeling responsible till the end, and in spite of numerous off-the-wall gallops across its many existences, it is that responsibility that drives the entire experience. The mere handful of games that have demonstrated this kind of player-reliant atmosphere is striking amongst the ones that have tried, and however brief the romp through its multidimensional hellscape feels, Pony Island could well be in the process of joining them.

You'll notice I refrained from using the word 'ending'. The truth is there's more to Pony Island than meets the eye - despite it planting expectations for those kinds of surprises early on. Scattered amongst the levels are collectible arcade tickets that unlock additional secrets, as well as a smattering of references that reveal the obscure plot. There's a decent amount of replay value cited within Pony Island's two hour escape, and without divulging specifics, this is a game you're going to want to return to if you want the full impact. 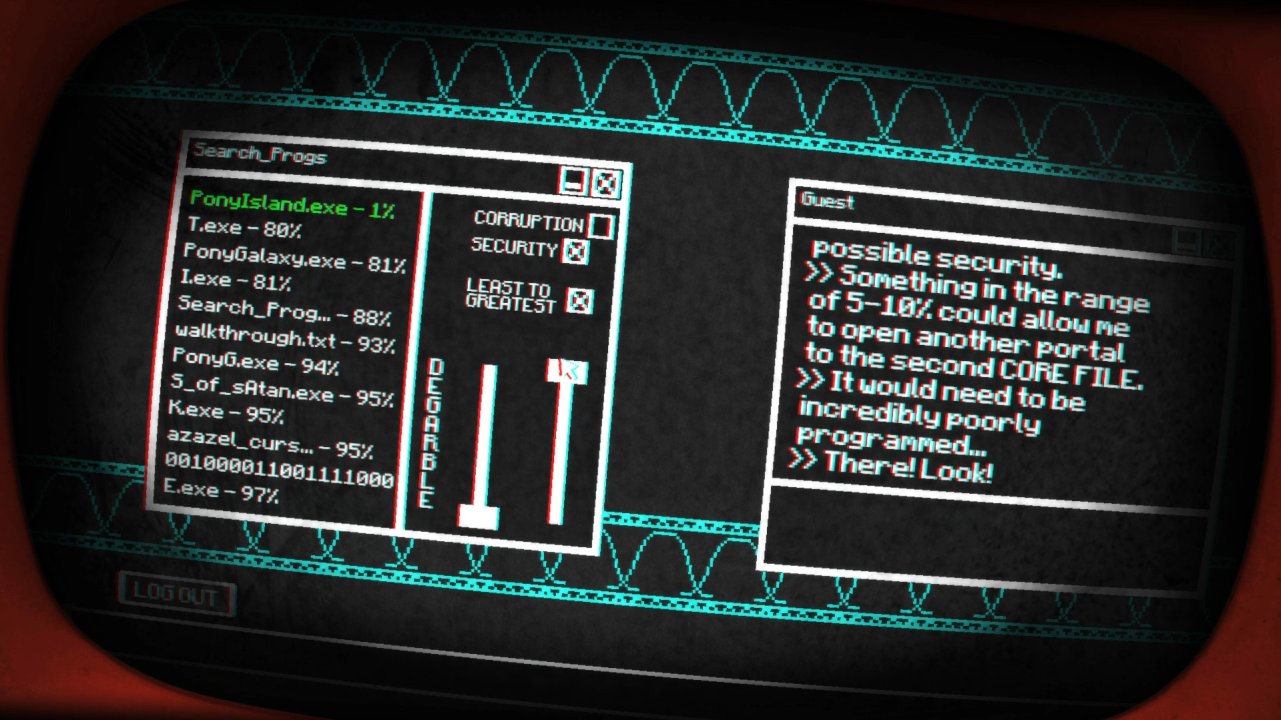 This review can seem a little inflated if you're not one for philososphy. Rest assured, it's not a game I'd recommend lightly to immersion seekers, or even those looking for mechanical complexity. Left and right click are the meat of the control scheme, with the keyboard taking centre a mere handful of times. Gameplay in Pony Island is kept secondary to narrative, and its primitive mechanics and simplistic levels may irk those with a low tolerance for its existential ponderings.

Pony Island is narcotically unpredictable, but it's remarkably studded with confidence. It knows it's unreliable, patchy and potentially pretentious, and it makes sure to laugh about it. It's not a game I'd recommend hand-over-hoof to those looking for voluminous systems or meaty mechanics, but its many narrative facets drive Pony Island's maddened underworld, concealing a dark, ominous experience that only truly hits you once the credits finish rolling.

82
With skimpy mechanics, and deliberately restricted animations, Pony Island's technical playthrough is bugless, untaxing and smooth, if rather unremarkable.
Overall
81
Pony Island is clever, creative and veritably ludicrous. It's not heavy on mechanics, and puzzles can slow down the experience, but its satanic tendencies and cultural observations endures far beyond its prompt closure. Neither for, nor about ponies. 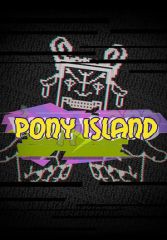