A fully-featured sequel that stays true to its predecessor and ups the ante overall.

Just over one year ago, Left 4 Dead landed on the PC and Xbox 360, quickly exploding into one of the most highly regarded and recommended games of last year’s holiday season. Undoubtedly, it was one of the best multiplayer games of 2008 but was criticized for its low amount of content overall, despite the game’s extremely high replayability. Releasing exactly one year after the first, Left 4 Dead 2 has already seen a lot of criticism for having the potential of being underdeveloped and unnecessarily sped through production. So did Valve jump the gun on a sequel or does Left 4 Dead 2 make the zombie apocalypse more exciting than the first time around? 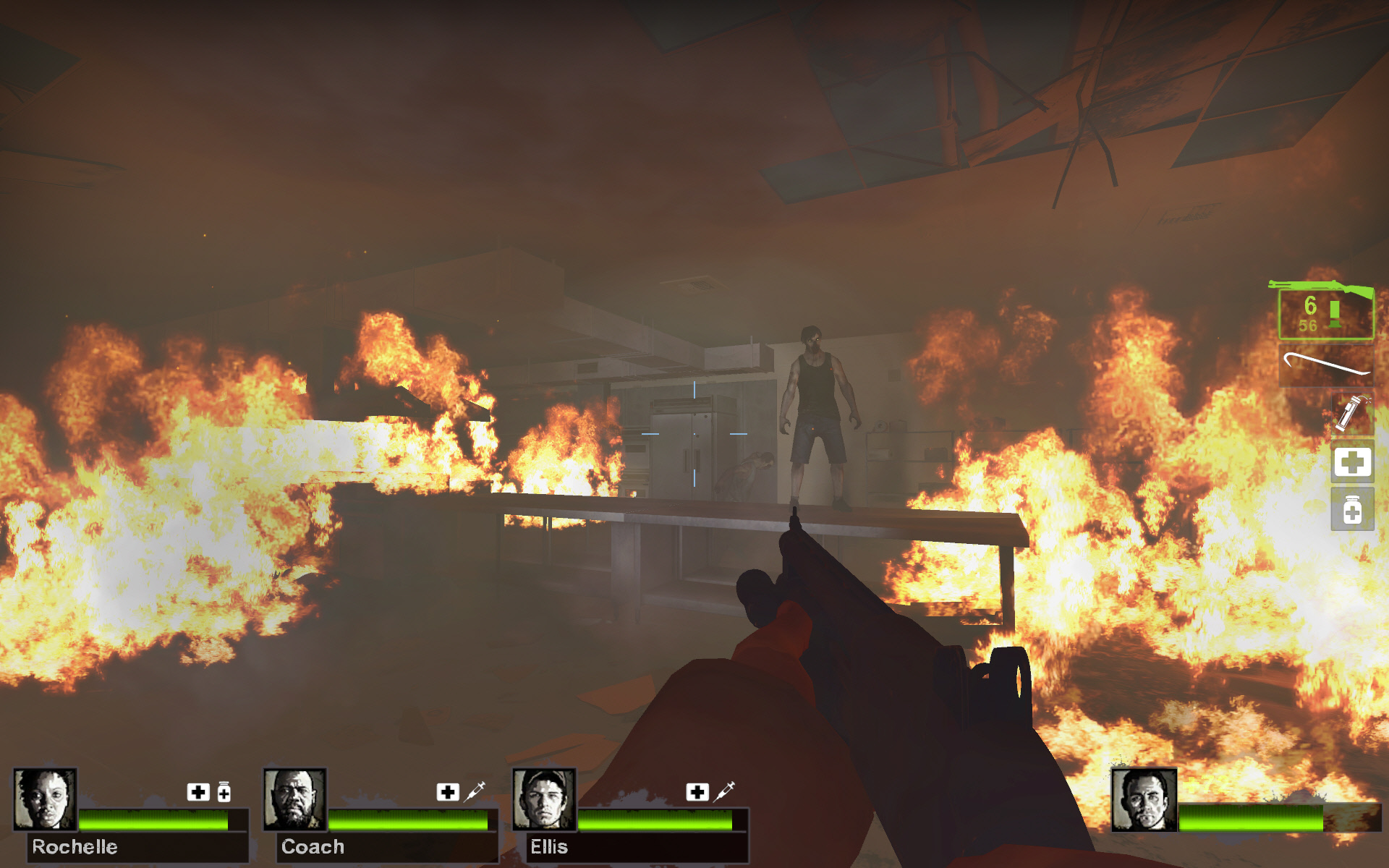 There is smoke, fire, and rain aplenty throughout

Beginning with the game’s presentation, Left 4 Dead 2 will give you new faith in the longevity of Valve’s Source engine. Character and weapons models look great and considerably better than the first game. Zombies can be graphically dismembered with both the melee weapons and the firearms. What was simply a red mist after a pipe bomb’s explosion in the original are now chunks of decomposed flesh flying over head, even torsos trailing intestines like streamers behind them as they hurdle across the sky. From the torrential downpour of Heavy Rain to the smoke filled lobby of Dead Center, environmental effects look nice as well.

Despite looking better here than it has in the past, it simply cannot be avoided that the Source engine still looks aged overall. This is especially apparent when comparing it to newer titles like Uncharted 2 and Assassin’s Creed II. On the plus side, Left 4 Dead 2 can be played on fairly low-end gaming computers but there’s not as much there on the high end as there may be in other current-gen titles.

Following in the footsteps of the first game, the audio work here is extremely well done. The music has been given a southern twang and jazzy makeover that both sounds great and builds up the game’s atmosphere. Gun and explosion effects sound great with only a few of them being carried over from the original. Every Special Infected has an easily distinguished profile of sounds that make both campaign and versus almost as much about listening as it is about watching. The voice work is top notch, much like the first game, but seems to be a bit more limited in total number of spoken lines than the first. Perhaps the lines are there and can be initiated through the radial menu, but through all of my playthroughs, I felt like I was hearing the same lines of dialogue almost every time which was a bit of a disappointment considering all the ramblings of Zoey and Francis found in the first game.

Moving on to the content and overall gameplay, Left 4 Dead 2 brings well over double the content of that found in the original. With 5 campaigns, 5 game modes across both single player and multiplayer, 3 new Special Infected, 4 new Uncommon Infected, a wide array of new firearms and ammunition, and 4 new characters, there is plenty of content to go around, making this game feel like much more than free DLC or even a $30 expansion pack. 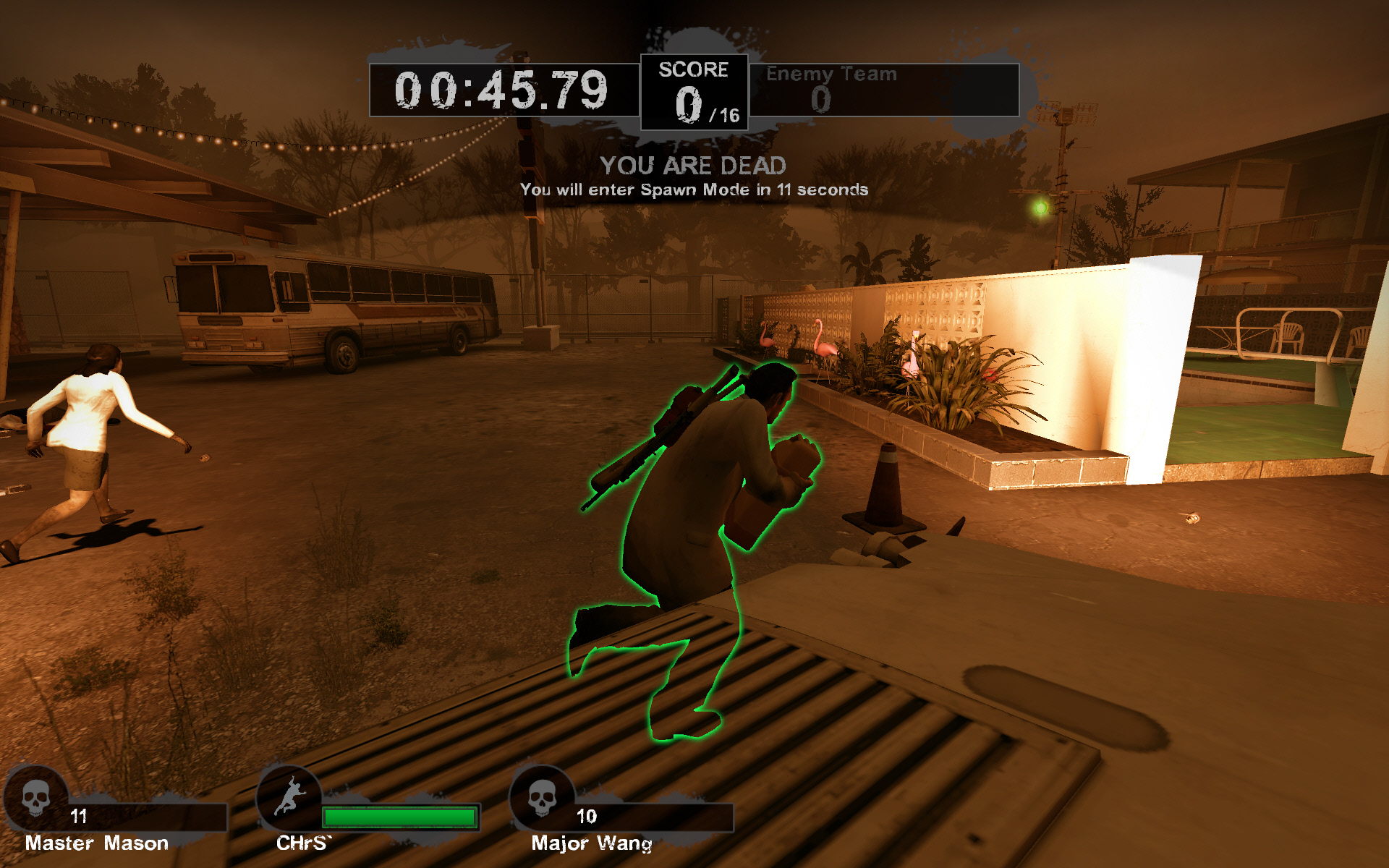 Scavenge mode can be a nice change of pace

The gameplay is much the same as the first with 4 players, either a single player with three bots or an entirely human party online, fighting their way through 5 fairly linear levels meeting Special Infected, Crescendo moments, and the heart-pounding Finale all along the way. Where the first game’s Crescendo events had you setting up base in a certain area before flipping a switch or shooting a gas tank, Left 4 Dead 2 brings a more run and gun approach to the highest moments of action. Whether that means running along the track of an old wooden rollercoaster or attempting to turn off a carousel before you are overwhelmed by the horde, the Crescendo moments have been raised to a whole other level of both tension and action. The Finales are more of a mixed bag in terms of game mechanics with a fairly even balance between collecting items over a closed area, running the zombie gauntlet to safety, or simply holing up and waiting for a helicopter the old fashioned way. The lack of repetition here leads to interesting strategies and moments of teamwork both in cooperative play and in Versus mode. You’ll soon find yourself picking your favorite to play as Survivor and you’re favorite to play as Infected (for me, it’s Dark Carnival and Dead Center respectively).

With 5 diverse and interesting campaigns ranging in duration from as little as an hour to as much as 3 hours each depending on the game’s difficulty and the level of skill throughout your party, Left 4 Dead 2 racks up at least 10 hours of gameplay in a single playthrough of the cooperative game mode alone, which is above average for many single player titles on the market today. Add on the hours and hours most players will find themselves pouring into the multiplayer modes and the total game time here can be quite sizeable. The name of the game here is teamwork and because of this, single player can be both a lonely and frustrating experience as there is no way to tell the bots to pick up a health pack, to heal you, to run back to a more open area when fighting a tank, etc. The bots’ AI is comparable with the first in the series and that is to say it’s very weak. You’ll find them trailing well behind you, taking foolish approaches to dealing with Special Infected, and being incapable of understanding strategies that maybe somewhat off the beaten path. These issues coupled with the lack of variety in the voice overs leads to a very shallow experience. In terms of the single player game, Left 4 Dead 2 contains all of the faults of the original with little improvements aside from the game’s new content. 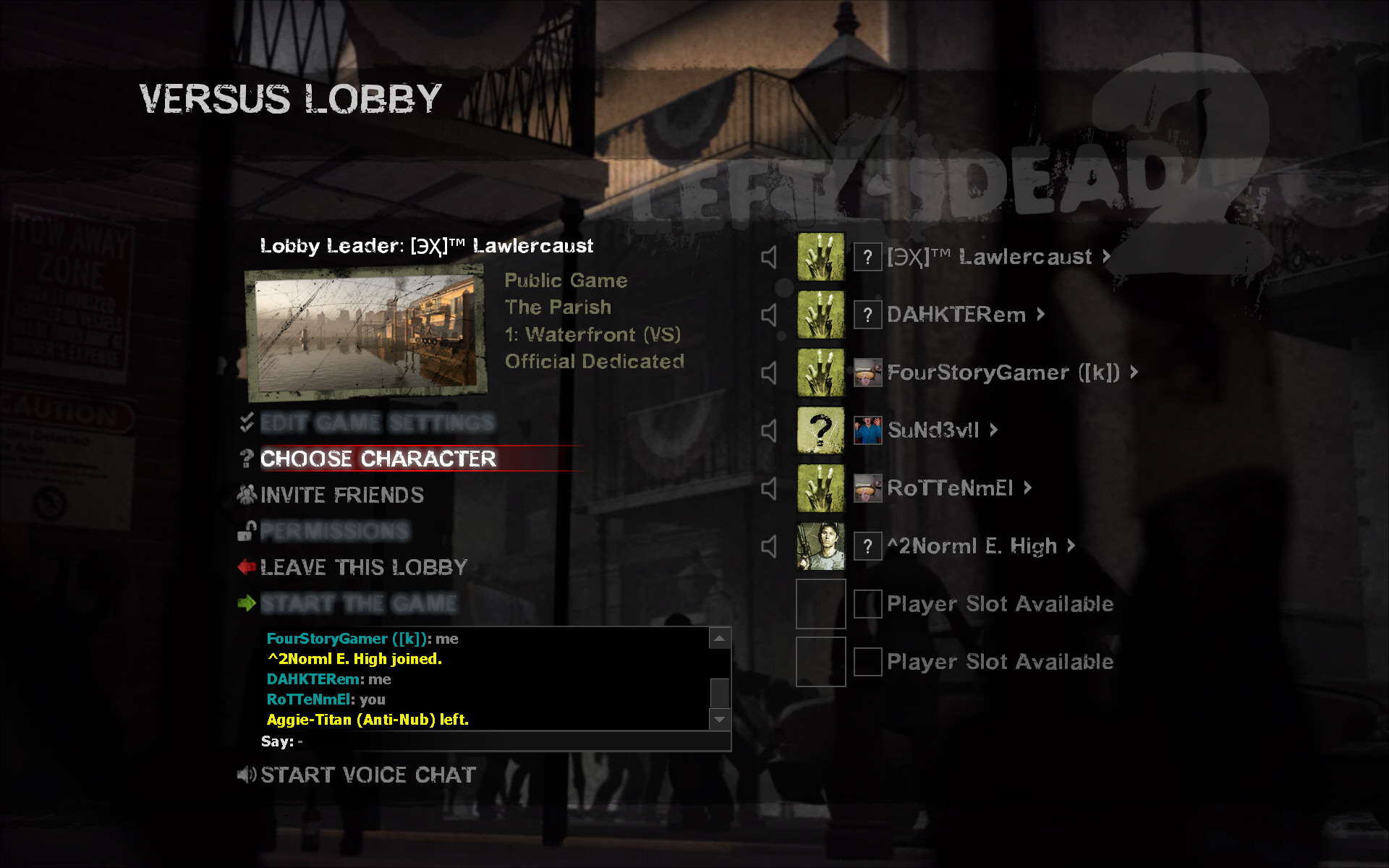 Expect to see this screen a lot

In terms of performance, Left 4 Dead 2 is great. Valve’s Source Engine has had most of its kinks worked out for years so the game will run smoothly on systems of all types, rarely crashing or having any visual bugs. Throughout my time with the game, I did run into a few bugs but they mostly seemed to only pop up in the game lobby and during the matchmaking process rather than the gameplay itself. At times, a lobby’s voice chat may not work for one or more members of the lobby. Matchmaking is still extremely slow with impatient players up and leaving before many games can get off the launch pad. You’ll find yourself sitting in a lobby for nearly ten minutes or more quite often, unless you are one of those players jumping from game to game where you’re likely to have to find a lobby over and over before finally filling a match. Occasionally, the game will throw a group of players in the U.S. on a French or similarly distant server requiring a return-to-lobby vote before restarting the game which is a small annoyance but an annoyance nonetheless. Despite these minor flaws, once you get a game up and running the experience lasts so long and plays so well that the average player will be more than willing to put up with the troublesome lobby system and the occasional bug.

Like many sequels, Left 4 Dead 2 will be held to the standard of its predecessor by all those who played it in the past. At first glance, L4D2 seems to be nothing more but new maps on the same old game, but after digging further into the game and getting a campaign or versus match under your belt, you will clearly see the differences and improvement’s Valve has made since the release of the Left 4 Dead. The campaigns are tenser, longer, more varied, and more exciting than before. The Versus mode reaches new levels of fun, chaos, and strategy with the inclusion of the new Special Infected, Survivor weapons, and excellent level design player’s have come to expect from Valve. The game world is much more fully constructed and thoughtfully realized than before, making for a more entertaining and believable zombie apocalypse experience. Left 4 Dead 2 is a fully-featured sequel to last year’s Left 4 Dead that will reinvigorate your zombie fighting skills and get you back into the survival mindset. The game looks and plays better than before but unfortunately retains the shallow throw-away single player component of the first title in the series. Multiplayer, both cooperative and competitive, is a considerably more exciting and richer experience that promises to be hugely replayable. So to all you boycotters out there still questioning whether or not to make the leap to Left 4 Dead 2, I have one thing to say: Take a leap of faith on this one. You’ll be happy where you land.

Our ratings for Left 4 Dead 2 on PC out of 100 (Ratings FAQ)
Presentation
85
The graphics are a considerable increase over the first title and the updated menus and UI look great, but the Source engine is still looking a bit aged, especially against some of PC's highest end titles.
Gameplay
90
5 campaigns, a number of interesting firearms, melee weapons, four game modes, a slew of multiplayer options, new special infected, and some of the most memorable zombie apocalypse experiences around make this game huge on gameplay.
Single Player
65
A capable and exciting experience through all five campaigns that tends to ultimately be frustrating due to less-than-intelligent bots and the lack of team play that's found in multiplayer
Multiplayer
80
One of the best cooperative experiences of all time but is plagued with slow matchmaking and a huge potential for frustration based on your teammates and server.
Performance
90
The Source engine looks great on the high end while being capable of running on fairly low-end machines. Valve's been refining the engine more and more and it shows in stability. That said, there are still a few bugs that need to be patched.
Overall
82
Left 4 Dead 2 feels like a fully-featured sequel that stays true to its predecessor. If you weren't a fan of the first game in the series, this will feel much the same to you, but if you poured hours and hours into the original, Left 4 Dead 2 is must-buy. 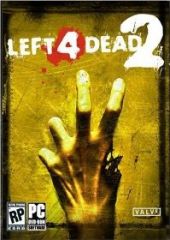