When the original PVZ: Garden Warfare sprouted onto the scene back in 2014, it was a rather pleasant surprise. What seemed in theory to be a possible cash-in on a brand name was instead one of the more unique and purely enjoyable shooters of the year. It had charm, accessible and polished gameplay, and overall it was quite a fun game. So it may not be exactly shocking that a sequel has now arrived, bringing with it a slew of additions and changes, in hopes of recapturing the attention of the casual shooter audience. Plants vs Zombies Garden Warfare 2 offers many of the same experiences that made its predecessor a success, but the novelty has faded a bit. 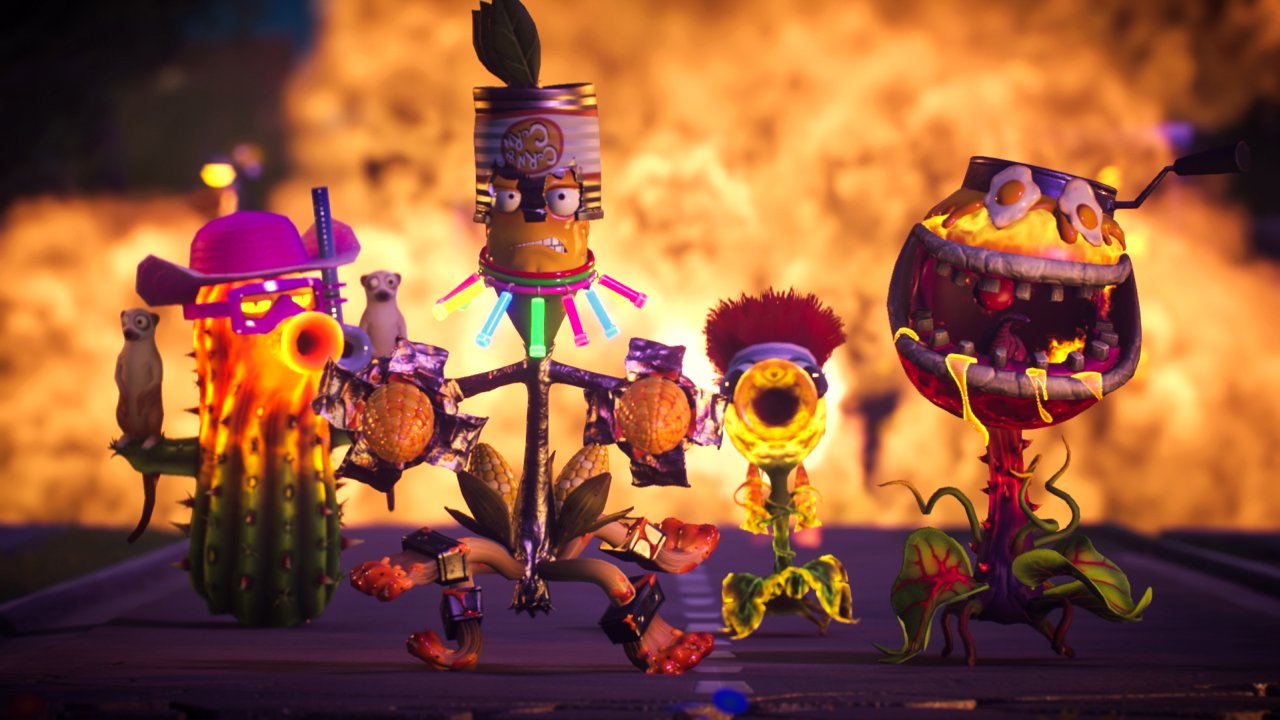 In Garden Warfare 2, players can assume the role of either a plant or a zombie as they shoot and blast their way to victory from a third person perspective. All of the character classes from the original game make a return - from the Peashooter to the Chomper and Cactus plus others for the plants; Engineers, Scientists, All-Stars and more for the zombies. Each class still has a notable list of different variants, which not only significantly alters the look of the character but also grants it different abilities. So whether you want to be a Mystic Flower, Bandit Cactus, a zombie Hockey Star or General Supremo, the amount of gameplay variety is quite staggering. Those who played the original game have the option to import their characters into the sequel, so that your variants and customization items are already unlocked and ready for use.

Brand new to the sequel are three character classes for each faction. Zombies get more whacky classes that somewhat resemble real world caricatures - Captain Deadbeard is an old zombie that can turn into a parrot to travel across the battlefield, or use his spyglass to perform powerful long range shots. Super Brainz is a zombie that acts as a super hero, complete with attacks like Super Ultra Ball which fires a slow moving but high damage projectile, or the Turbo Twister for close range AoE damage. Finally, the Imp is a small and agile character that is at his best when he's able to call down his Z-Mech and finally dish out some serious damage.

Plants, meanwhile, get Citron - an orange with a cool attitude that has a shield and can become a ball for faster traversal. Kernel Corn is another new addition, featuring quick-firing guns and ability to call down small airstrikes. Finally, Rose is a utility type class that aims to support her team and has a weapon that homes in on targets. All three of the new plant classes do well to fill in roles that were previously missing, by giving the faction more attacking options and adding to the general explosive mayhem. Almost all abilities and hundreds of cosmetic customization items from the original Garden Warfare return, with a new additions. 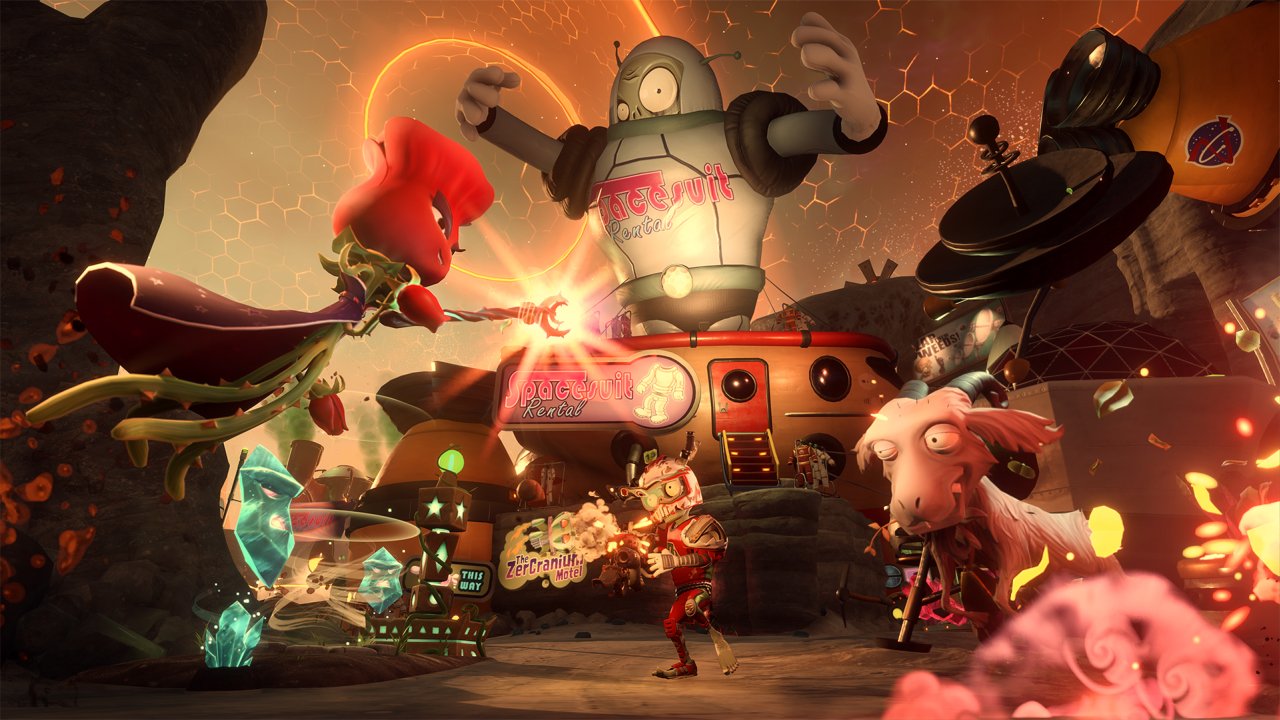 The total roster size in Garden Warfare 2 is rather significant. While the variety is great, balancing all of these abilities and classes is surely no easy task, and in the early going it is the Plants that seemingly have the advantage, much as they did at the launch of the original game. The new characters specifically are meant to balance each other out, and they do for the most part, except for Rose whose versatile skills and auto-homing weapon make her far too effective compared to the rest. Given how intense some of the action gets, a balanced team composition is more important than having a specific class variation unlocked. Much as before, players will gain experience in order to unlock new abilities, however this time each class variant has their own XP level (instead of one per whole class), meaning it will take a very long time to get all of your favorites leveled up.

The coin and card packs systems return relatively unchanged from its predecessor and is similar to Titanfall. Players earn coins from all activities in the game, which can then be spent on opening card packs that contain a variety of items. These cards can be pieces of new class variants (collecting them all unlocks the character), self-revive consumables, or deployable AI helpers. Players should be able to maintain a fairly steady supply of coins without needing to spend real cash, and the card packs are laid out such that you know what you're getting - there is a pack that guarantees to unlock a new character, a pack to specifically refill your single-use items, a pack for each faction, and so on. It's still a solid system that does not need much altering.

The action will be taking place in a variety of modes. Players who prefer to play solo will be happy to know that there is a little bit more to do in the sequel. GW2 has a relatively brief story mode for both factions, where players go through a series of missions that get you familiar with some of the multiplayer maps, as well as exploring the new game world hub. This hub is a relatively large area with the plants and zombies home bases facing each other across a hill. The area is referred to as Backyard Battleground, and has a single hill that both factions try to control. Players can choose to ignore this ongoing battle, or actively participate by claiming the hill and trying to survive the incoming waves of retaliation attacks. It's an endless survival mode of sorts, which is good fun both solo and cooperatively. 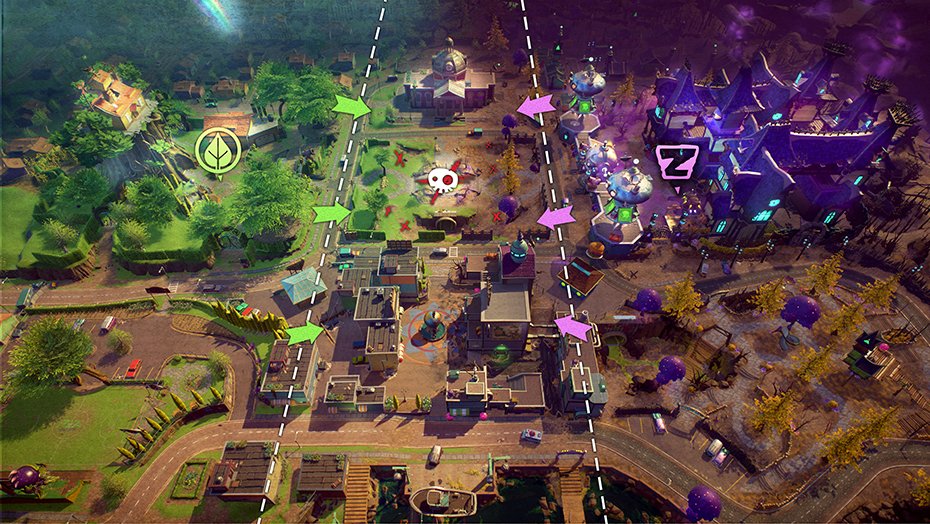 Elsewhere, players can also explore the nearby areas which feature parks, a marina, and an underground passage. There's not much to do in them sadly, except open chests using stars. These stars are the secondary currency in the game, and are earned by completing semi-daily quests. Players can pick whichever quests they wish to do, like getting a certain number of wins in a mode or defeating certain types of enemies. Completing the quests earns you stars for the chests, which contain either coins or items; value of your rewards is dependent on how many stars a chest requires to be opened. Completing quests also boosts your XP multiplier, thus potentially helping you level up faster. While the offline content is decently expanded in the sequel, it's still rather shallow and only serves as a tutorial of sorts. Also, because there's a bit more to do solo, players will be more annoyed that the sequel (like the original) is always-online, so you can't pause the action even during story levels.

Garden Warfare 2 is still a multiplayer focused game, and thus there are plenty of options for playing with others. Local co-op has been improved; your guest can now use their own XBL profile and you can team up in any of the offline modes. Those looking for cooperative action can fire up Backyard Battleground, or get a few rounds in Garden Ops or Graveyard Ops (the reversal of Garden Ops with you playing as the zombies defending from waves of plant attacks). Much as before, you can spawn additional plant defenders from pots (or install small robots as zombies) in all of these "tower defense" style modes. There are some new spawnable turrets worth checking out for both factions, and the zombie variants in Graveyard Ops are functionally the same as those in Garden Ops. As your team reaches later rounds, you can look forward to new challenging bosses that are randomized. These tower defense type modes remain fairly fun and enjoyable thanks to enemy and map variety.

Last but not least, there is an unlockable cooperative mode called Infinity Time. Here, players actually control a futuristic robot and try to survive against very challenging waves of enemies and bosses mostly made up of gnomes. This is straightforward survival in an alien world, with no turrets to help, though your robot's attacks are quite powerful. It's tough, so tackling this with friends is highly recommended – unfortunately there is no matchmaking. After unlocking and trying out the mode for the first time, players need to use stars to access the mode again. This means you'll have to grind some quests in order to return to the mode. Rewards for surviving as long as possible in Infinity Time include exclusive character variations, coins, and other items. 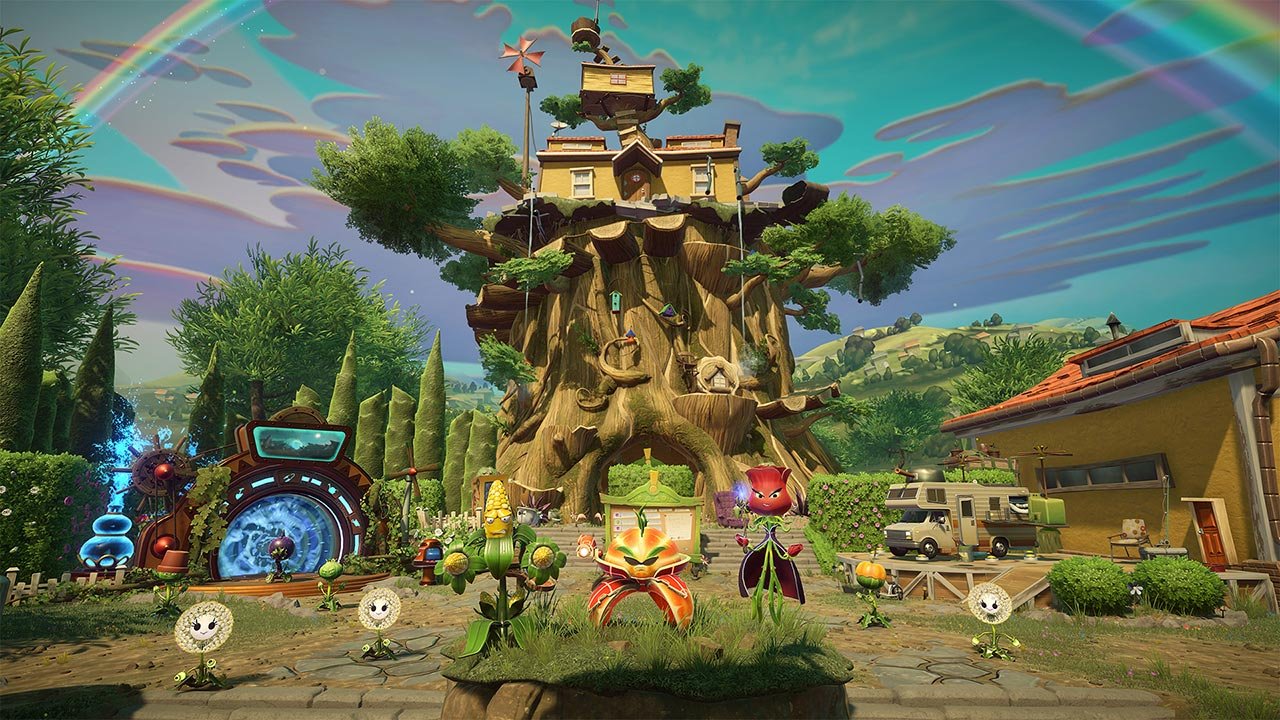 Those heading online to be competitive will find plenty of modes to choose from, most based on other multiplayer shooters and unchanged from the first game. From Team Vanquish, to Vanquish Confirmed, Gnome Bomb and others, the gameplay variety is solid, if not unique. Herbal Assault is new, but it's simply the reverse of Gardens & Graveyards, with plants attacking and zombies defending. You'll be battling it out on a variety of decently large and colorful maps; from the snowy Frosty Creek to the deserted Boney Island. The maps offer plenty of space and opportunities to flank, as well as teleporters to the front lines if the game mode needs it to keep the pace up.

GW2 retains its predecessor's cute and colorful look, allowing players to fully immerse themselves in this whacky world. From the character design to the wonderful animations and effects, everything in the game is both amusing and carefully crafted, sure to bring joy to both younger and older players. Music and audio design fits the setting just as well, offering a mix of licensed tracks and originals. There is no dialog to speak of, but the writing and subtitles remain consistently funny. Except for some rare occasions where the game stutters during online play, the whole experience performs very smoothly even during the most explosive showdowns featuring tons of combatants on screen.

Plants vs Zombies Garden Warfare 2 is a solid sequel. The main mode additions are focused on offering the same experience from the zombies perspective as the plants already had. New character classes effortlessly fit into the expansive roster, though it's only getting more challenging to balance them all. The game looks and sounds wonderful, and is quite accessible. While still charming, the novelty has dissipated a bit with this sequel and the asking price feels a bit high for what players get, when compared to the original. Still, Plants vs Zombies Garden Warfare 2 offers a very solid and light hearted shooting experience that is recommended to most fans of shooters, and perhaps especially those of younger age.

Our ratings for Plants vs Zombies Garden Warfare 2 on Xbox One out of 100 (Ratings FAQ)
Presentation
87
The sequel retains an excellent visual style that's true to the franchise. It is bright, colorful and wonderfully realized.
Gameplay
80
The new character classes are balanced for the most part, and integrate well into the already expansive roster. The action itself remains quite chaotic but still accessible.
Single Player
50
There is more to do alone, from the two storylines to daily quests, but most of the content is just filler. The necessity to be always connected to the servers is more noticeable this time around.
Multiplayer
75
Most of the modes are largely unchanged from the last game, and the new additions simply swap the factions. Online play is still well designed, but lacks anything truly new or unique.
Performance
80
Outside of rare connectivity issues and the annoying always-online requirement, the game runs smoothly.
Overall
78
Plants vs Zombies Garden Warfare 2 offers more of the same multiplayer action and enjoyable presentation with a few new features coming to fruition. It's charming and accessible, though the game doesn't break any new ground. 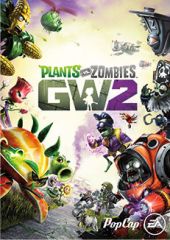 All videos for Plants vs Zombies Garden Warfare 2 (6)
Advertisement ▼