Taking inspiration from the past and modeling a game after classics of old is not a bad idea per se, but it’s one that needs moderation. While pushing hard to mirror these games might offer a good helping of nostalgia, the price of doing so may mean sacrificing new ideas in the process. Zheros channels itself after classic arcade beat ’em ups, but it never strives to do anything different to set itself apart from the pack. As a result, the game never rises above much else than a linear and bland reminder of the past. 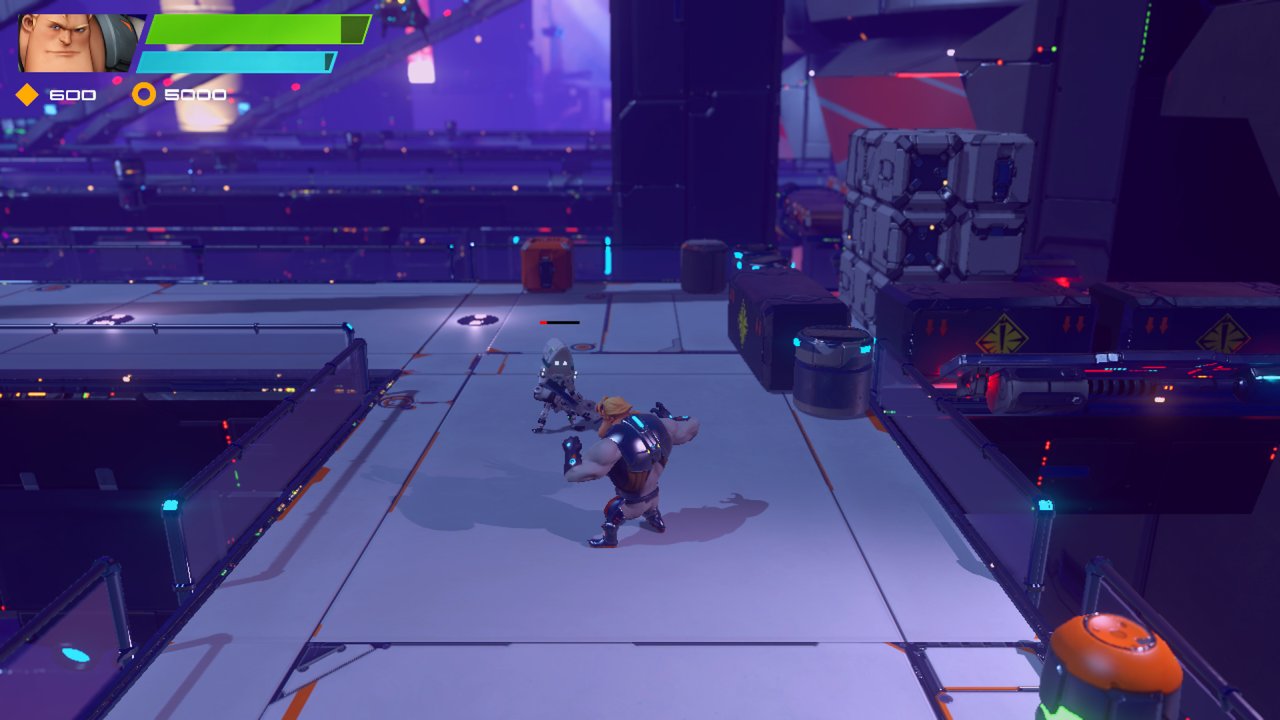 There is virtually no story in Zheros, or at least not one that is efficiently explained. Players choose either a male or female protagonist, Mike or Dorian, and face-off against waves of enemies dispatched by Dr. Vendetta. Other than bearing a strange resemblance to Pete of the Mickey Mouse universe, there is seemingly no inspiration as to why Vendetta is a villain that players should want to defeat. No reasoning is given behind why he is invading some nameless planet or why he is sending waves of the same enemies to kill you. Hell, for a guy whose name is actually Vendetta, there’s not even a reason to suspect that he has a personal vendetta against another character. There is no dialogue in the game aside from occasional grunts, and there’s not even any written dialogue to form any semblance of a story.

One word that continually describes Zheros is repetitive. The game’s 17 different levels take place in two worlds; one resembling a space station, and the other featuring the planet’s wilderness. This distinction is about as far as originality goes in terms of each subsequent level. Several look identical, with the same sort of backdrops and linear paths. Every level follows the same goal; start at one end of the path and fight your way through the same types of enemies until you reach the end. Many of them tend to drag on for far longer than is necessary. Oftentimes the end feels more like a relief that you can take a rest from button-mashing the umpteenth group of enemies to death rather than an accomplishment of finishing a difficult test.

With many levels going on for as long as they do, it’s strange that the checkpoint system is so bare. Each level contains one around the midpoint, but that’s problematic because the gameplay at times is lacking. There aren’t many platforming sections in Zheros, but the ones present are absolutely dreadful. Small, simple jumps that should be a complete afterthought often lead to your demise. After fighting through waves and waves of enemies, it becomes increasingly frustrating to have to start all over again because of cheap deaths. It wasn’t until after dying repeatedly that I found sprinting before jumps was the only way to ever guarantee success. It’s not that the jumps can’t be completed without sprinting, but more so that the game doesn’t recognize a successful landing even if you should have made it safely. 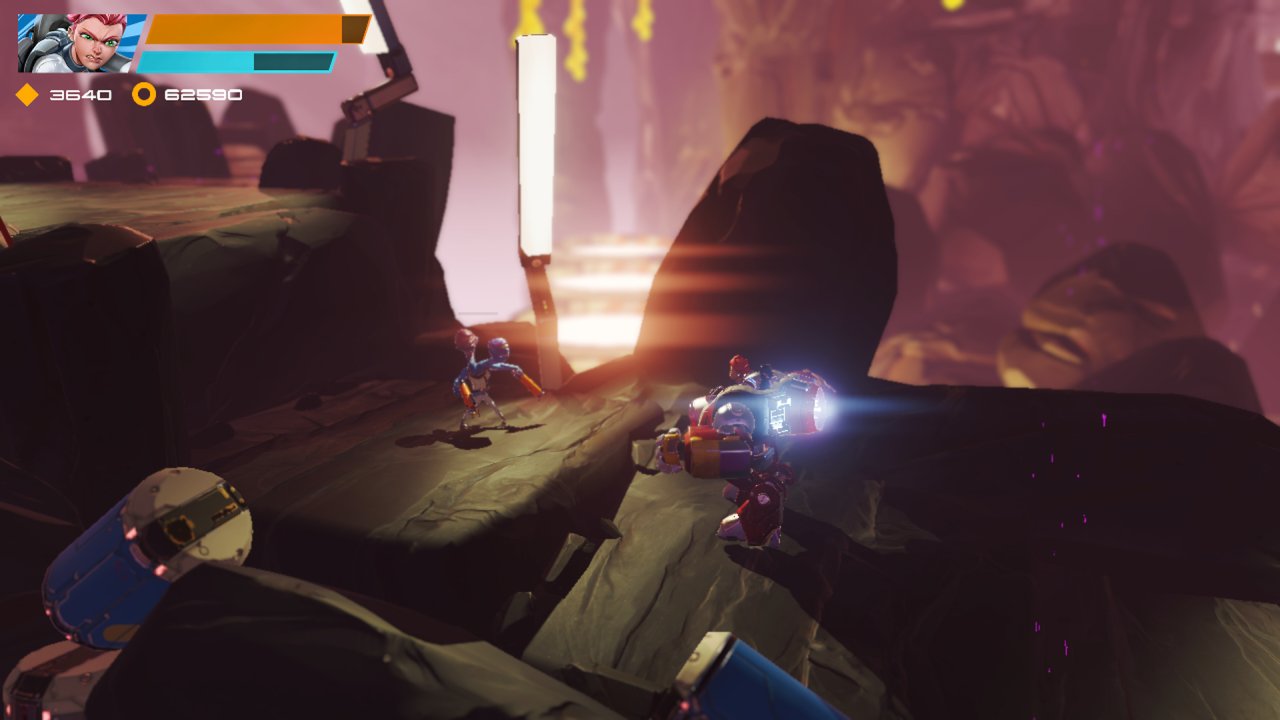 Certain enemies also have the upper hand due to uneven hit detection. It’s mostly noticeable with the more challenging foes, who are gradually introduced throughout the game. Getting caught in-between these bigger enemies and a corner or invisible wall often means losing significant amounts of health due to not being afforded the opportunity to get up and evade the attacks. Getting knocked to the ground is often followed by a series of attacks that make any sort of button-mashing virtually useless. At moments like this, any sort of challenge is instead replaced with a feeling of frustration, and it’s a feeling that rears its head all too often.

While the enemies are brutal at times, there are also moments where their AI is just bizarre. Even on the hardest difficulty I was able to stand completely still while a ScreenMan, one of the basic enemies you’ll encounter, circled for a good minute without making any attempt to attack. The boss fight midway through the game, while intimidating at first, also had issues providing a consistent challenge. After taking an aggressive approach to the fight, and finding my health greatly reduced, I was able to easily evade the boss and attack from afar with a constantly recharging ranged weapon. Since the attacks are so premediated by the animation, I always had more than enough time to roll out of the way and continue evading until it charged up. For a title where the biggest strength should be gameplay, it was surprisingly easy to manipulate what was meant to be one of the toughest sections. Zheros has a lot of unique enemies, which is one of the brighter attributes of the game, but most of them can simply be defeated by the same combination of button-mashing.

After spending about six hours grinding through Zheros, it was disappointing that even the conclusion didn’t provide any sort of significant sendoff. Even with a lack of any coherent story, the developers still managed to create and ending that didn’t feel worth the time put in. Without spoiling too much, it felt much more like an opening to create a sequel to Zheros in the future rather than rewarding the player for the challenge they had just tackled. It ultimately left me feeling bitter and wondering what was even the point of what I had just done. 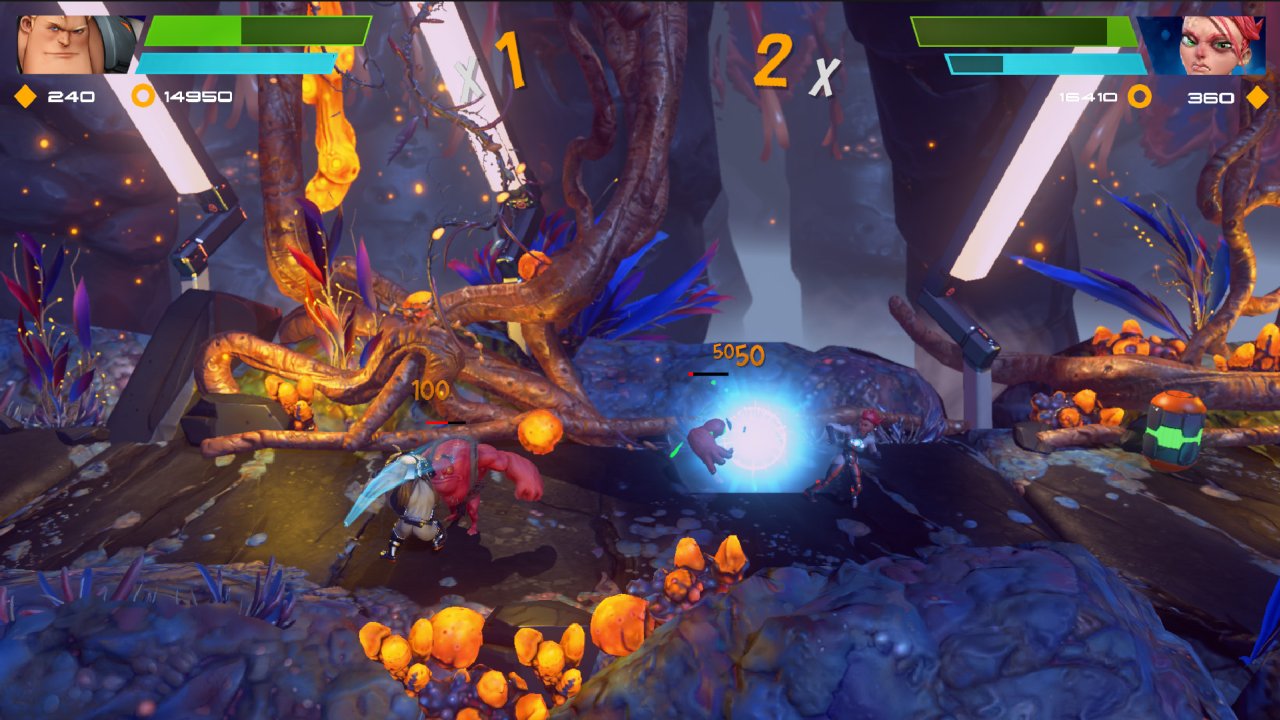 On a positive note, the journey through Zheros is not one that you have to make alone. The game features two-player couch co-op, and frankly, that’s just not something that is offered in many games these days. Both players share the same screen in close proximity instead of the split-screen approach. Most aspects of the game seem relatively unchanged when bringing a friend along, although some of the enemies do appear to be easier to defeat. While the inclusion of local multiplayer is nice, there is no online multiplayer which probably would have been more practical to include.

Zheros had the potential to be a revival of arcade beat ‘em up games of the past, but instead fell completely flat. With no story, no personality, and an extreme lack of originality, the grinding nature of each level ultimately feels bland and boring. Just about every aspect of the game, including the gameplay, level design, and even the soundtrack is very repetitive and offers little in terms of variety. With so many games fleshing out new ideas these days, it’s hard to justify spending the time with Zheros.

Our ratings for Zheros on Xbox One out of 100 (Ratings FAQ)
Presentation
40
Many of the levels are barely distinguishable and the soundtracks are just as repetitive. There’s no voice acting or any kind of dialogue aside from grunts.
Gameplay
50
Zheros’ combat is its strongest aspect, but lacks any real variety. The upgrade system is very shallow and doesn’t seem to change the game to any significant degree.
Single Player
30
There is no story, the characters are unremarkable, and many of the game’s levels drag on for far longer than they should. Zheros is one of the dwindling number of games that offers couch co-op, but even that does not add any replayability.
Multiplayer
60
It can be hard to find local co-op games to play these days, so its inclusion in Zheros is a nice touch. There is no online multiplayer, which would have been preferable to have.
Performance
60
Zheros runs smoothly enough while playing, but the video and audio abruptly and awkwardly cuts out before the beginning of each level. Occasional crashes to the Xbox dashboard were also frustrating.
Overall
50
Zheros had clear ambitions of playing homage to classic arcade games, but focused too heavily on doing so. The gameplay is far too lacking to make up for the game’s other glaring issues. 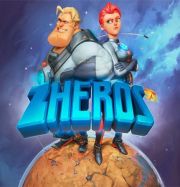