A breadth of fresh scares

Jump scares are a natural part of horror games, but how they are implemented varies considerably. Some games rely on a handful of carefully-placed scares, interspersed between action or puzzle-solving, to keep players from getting too comfortable. Others produce more consistent fear, using repeatable shocks based on an action or enemy type. Layers of Fear is a horror game with a copious amount of jump scares placed regularly throughout. The major difference, compared to similar games, is that it produces a broad range of shocks. The developers at Bloober Team have crafted many good scares, and their variety is an asset for the experience. 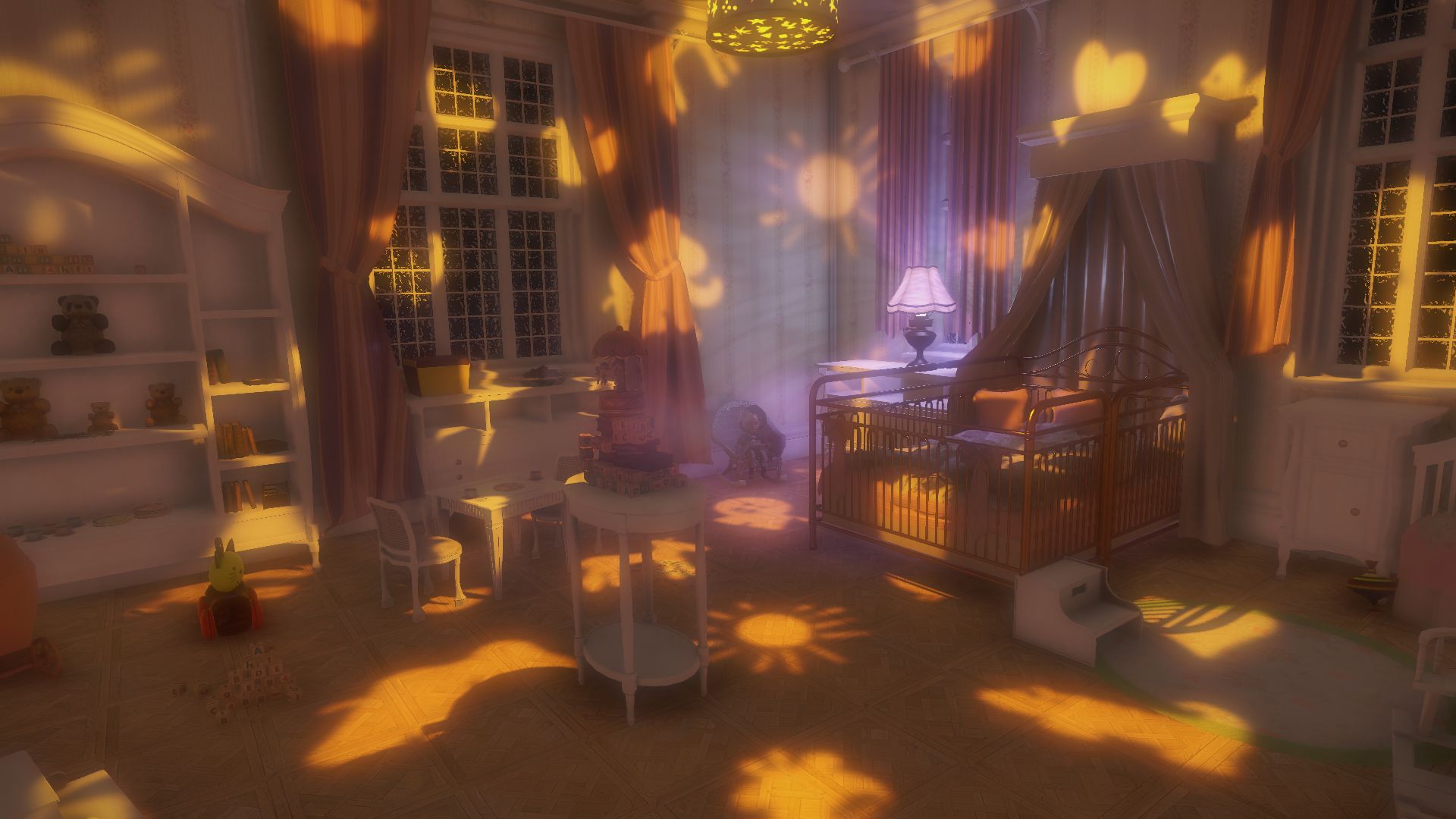 Nothing could possibly go wrong in this child's room

Layers of Fear takes place in a Victorian-era mansion, and you play as a painter who must finish his latest creation. The mansion appears fairly normal, apart from some rats scurrying around the basement and a few locked doors. Interactivity within the house is minimal, but notes can be read, and photos browsed, should you come across them. Many of these sundries are found inside drawers, which you manually slide open by ‘grabbing’ them with the mouse. Even doors need to be pulled or pushed to find out what, or who, lies behind. After a bit of exploring, you gain access to the painting studio that is central to the adventure. From inside, the nightmare begins. The mansion, as you know it, will become a very different place—a twisted adventure with a scare around every corner.

With a blank canvas in front of you, your task is to complete the painting. What exactly you are painting and why you are painting it are questions that will be answered in due time. No artistic talent is required, instead you scour the altered mansion for specific items that progress the painting to the next stage. This painting tracks progress, along with other collectibles stored inside the studio. Finding the main items is not a scavenger hunt because the adventure is linear and will take you directly to each and then back to the painting. Once you leave the studio, all bets are off. The horror unfolds in hallways and rooms that bear some resemblance to the original mansion, but the layout is all wrong. It is not a maze because there is almost only one way forward. Side rooms can be explored to locate more story notes, but most of the adventure is a straight line that resembles a walking simulator. As you open doors and find keys, you access completely new and illogical areas. 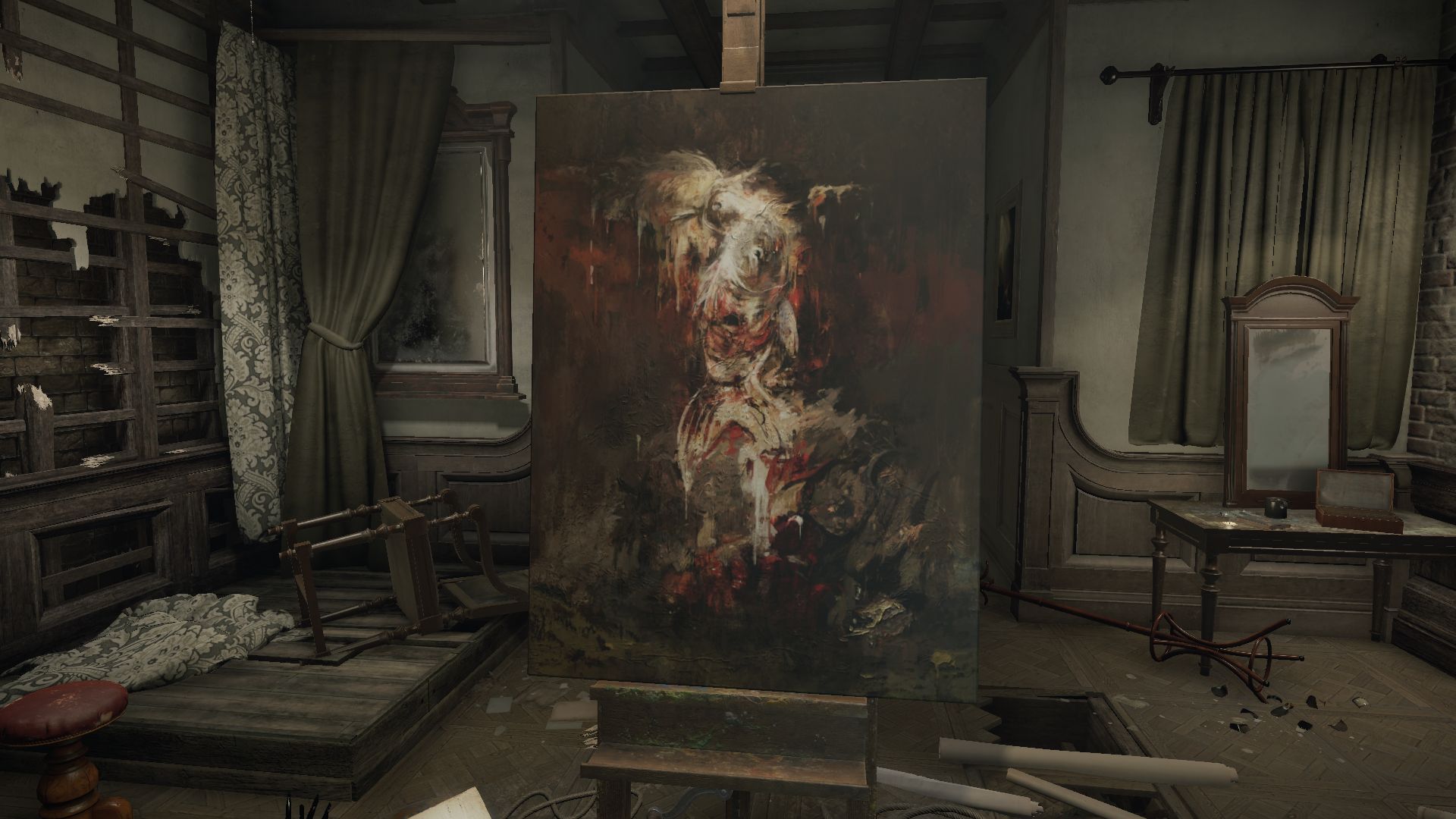 The incomplete painting looks pretty freaky, it gets worse

The changing mansion is a vital component when it comes to scaring the player. Abrupt changes to the layout occur when you are not looking. There might be a square room with four doors, each of them blocked with bricks, and one-by-one they vanish when out of view. Another change occurs upon reaching a locked door, whereby turning around reveals a wall right where a corridor was just seconds ago. It is not just the rooms that change, furniture moves or disappears entirely. Some of these events are part of the progression, taking you to a new section, while others are used more specifically to give you the creeps. As the adventure progresses, these changes become more bizarre and comprehensive.

Better scares are reserved for more traditional horror clichés. Doors slam, shadows appear, and windows blow open from the wind. There are human apparitions and a hefty supply of creepy dolls. The most interesting aspect comes from the walls or paintings that change or blend. The variety and quality of the scares is worth praising. Most are successful in their intent to cause sharp distress. With linear hallways and small rooms, it is easy to control the situation, but credit must be given to the timing, duration and placement of scares. While being on edge constantly is stressful, it was always compelling to find out how the game will terrorize next. The game is practically a tech demo for scare tactics. There are brief interludes between shocks—through short corridors usually—to prevent them from becoming overbearing. Although given its brevity, there are still probably too many without enough space between. The replay value is not great, even if some scares are subtle enough to be missed. There are minor changes to the adventure, but the vast majority of scares are identical in subsequent play-throughs. 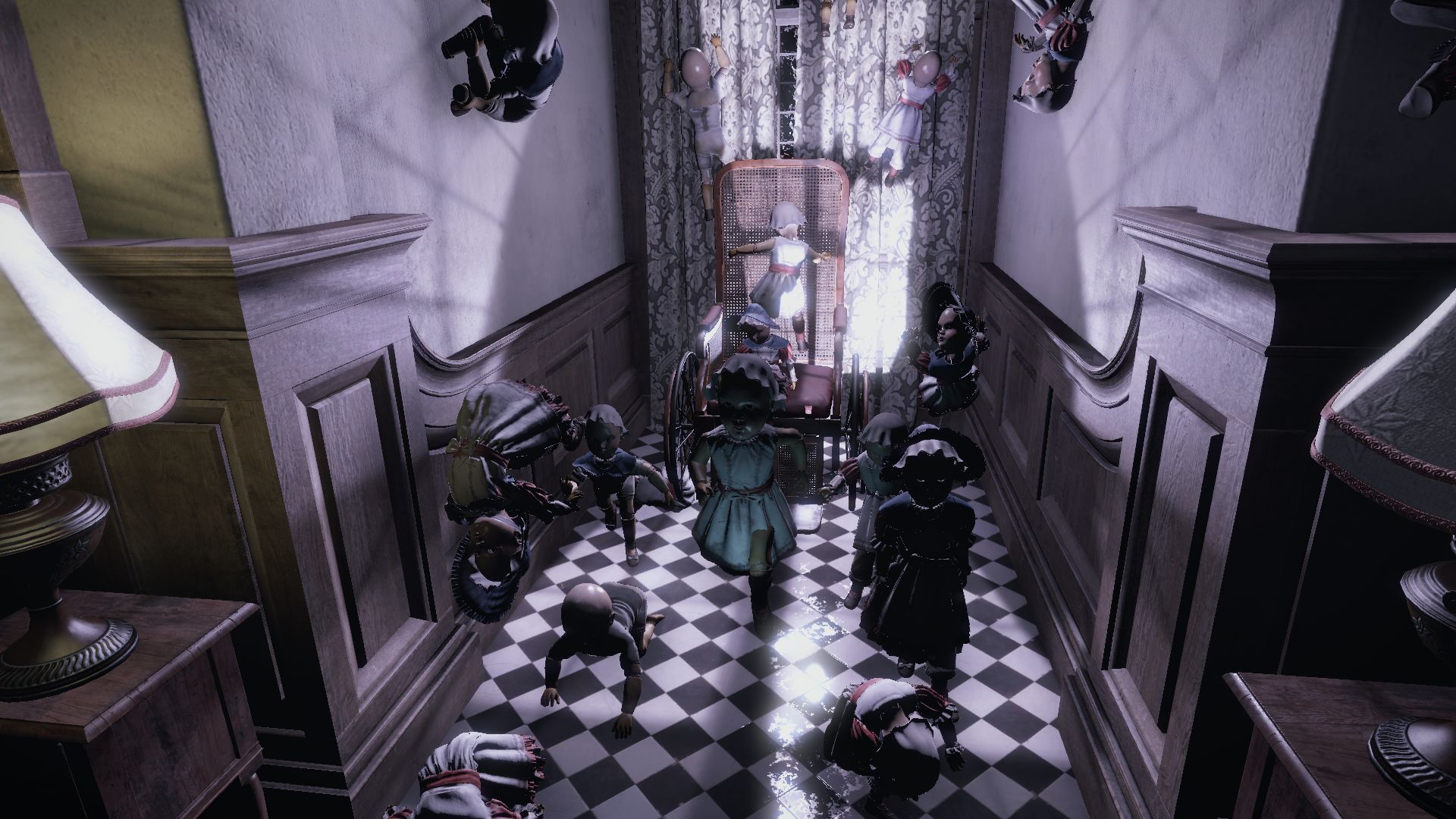 Spooky dolls, are there any other kind?

Assisting the horror is a consistent and dark atmosphere. The game runs on the Unity engine and features a substantial amount detail for such a brief horror game. The halls and rooms are packed with furniture and items—it is a shame that most drawers contain nothing of importance. As the mansion changes abruptly, it never becomes foreign or isolated from the initial design. Reusing locations prevents it from being just a bunch of rooms strung together, despite the fact that it is a bunch of rooms strung together. Obviously shadows are important, used specifically for scares, and the lighting engine works quite well despite not always running smoothly. Unfortunately the game is occasionally too dark, an easy mistake that befalls many horror games. Even setting the brightness well above recommended, high enough to wash out some well-lit scenes, it was not bright enough to actually see drawers hidden in some dark corners. While being overly dark is probably best for horror, there were some rooms that needed much more light.

Layers of Fear is a good example of how scares should be implemented in a predictable setting. With a broad range of traditional scares, it strives to terrorize the player with as many different tricks as possible. For some, it will be overwhelming, and perhaps the game could have provided more downtime—or at least something more substantial than searching through empty drawers for notes. Replaying the adventure results in a severe decrease in terror because the story plays out nearly identically. However, that does not change the fact that Layers of Fear will send shivers down your spine during its first attempt, thanks to many careful jump scares. With a steady increase in terror, Layers of Fear is a horror game that succeeds through its variety.

Our ratings for Layers of Fear on PC out of 100 (Ratings FAQ)
Presentation
81
Builds a good atmosphere with quite detailed environments compared to similar horror games. Art and texture work is particularly good
Gameplay
50
Most gameplay is just opening doors or finding keys. Aside from a few simple puzzles, it is essentially a walking simulator
Single Player
66
A broad range of successful scares, steadily increasing in intensity. Story is competent but too much is hidden away and only 2-3 hours long.
Multiplayer
NR
None
Performance
(Show PC Specs)
CPU: Intel i5 3570k
GPU: Gigabyte 7950 OC 3GB
RAM: 16GB DDR3
OS: Windows 7 Ultimate 64-bit

74
Occasionally slows in some scenes because of heavy dynamic lighting. Rare stutters when the mansion changes layout.
Overall
69
Layers of Fear is a competent demonstration of jump scares compressed tightly into an ever-changing and dark mansion. 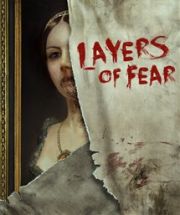