An explosive sequel with some truly drecksplosive features

Let it never be said that games have to be particularly smart to be fun. By all means, make appropriately awed noises when a game’s systems interlock beautifully, or when a game’s writing pushes the boundaries of the medium, or when a game is stuffed with mechanical subtleties that elevate it above its outward appearance, but there’s always a time - usually after a lousy day full of incompetence and late buses - when it just feels good to switch off and play something really stupid. Mindless gratification done right can be as memorable and engaging as anything else, whether it’s driving headlong into an intersection in Burnout 3 or slaughtering a thousand screaming headless men in Serious Sam, and no game did this better than Just Cause 2. It was, if I can get a bit vague for a moment, the right kind of stupid; a simple formula made brilliant by the amount of thought that went into ensuring that the destruction was satisfying, the conditions for destruction were perfect, and the means of causing destruction were as over-the-top as they were versatile. As a pretty clear iteration on that formula, Just Cause 3 makes a lot of improvements on its predecessor, but makes a few crucial changes that severely damage its potential for sustained chaos. 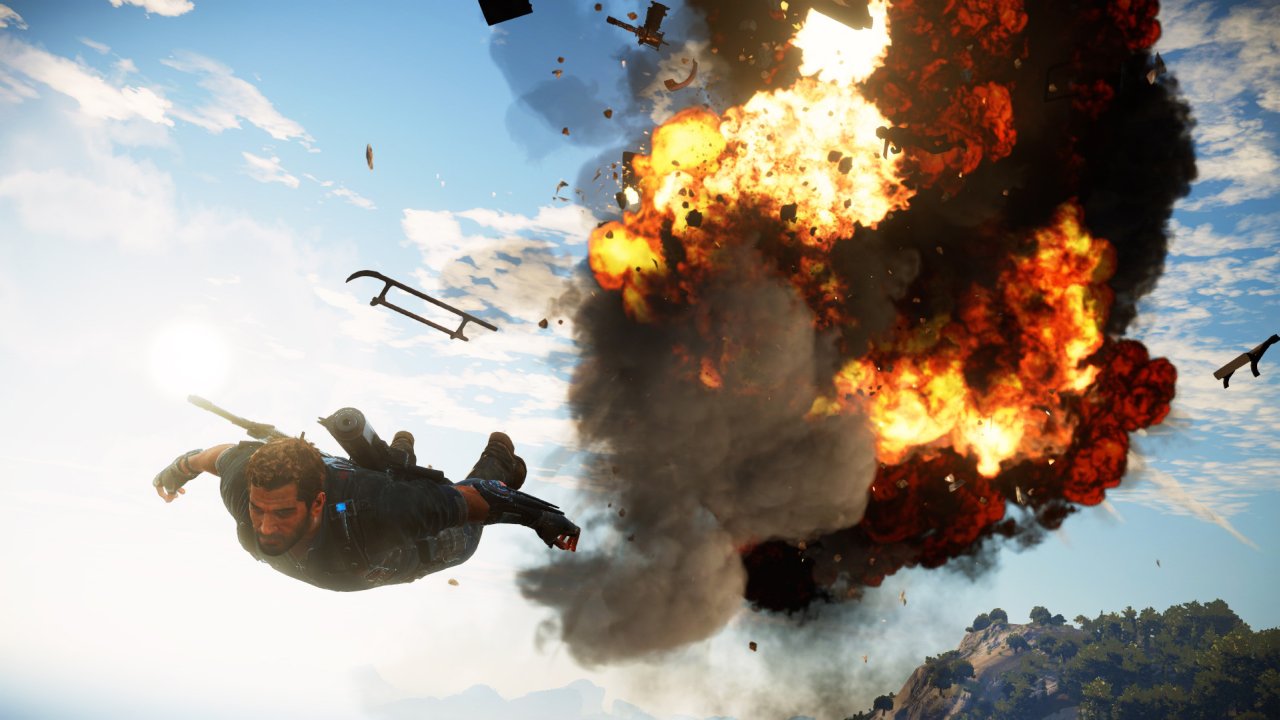 So here we are in the Mediterranean paradise of Medici, a considerable step-up from the not-Mediterranean paradise of Just Cause 2's Panau, if only because it looks like a genuinely attractive holiday destination that isn’t mostly impenetrable rainforest. As per usual, it’s been taken over by an oppressive dictator who wipes his bum with the Universal Declaration of Human Rights and treats his citizens with the level of respect I normally reserve for the people who phone me up purporting to be from “Windows support”, so Rico Rodriguez is here to do what he does best: destroy massive amounts of crucial infrastructure and kill thousands of people to solve a minor political dispute. You know the idiom “cut off the head and the snake stops moving”? When did that become “plant explosive charges all over the snake and hope that the head comes out from whatever rock it’s hiding under”?

Never mind. If I start questioning things like that, I might never stop. The intro sees Rico and his preposterously American colleague flying into Medici for reasons that aren't made exactly clear, but after being forced to stride back and forth across a Cessna's wingspan firing rockets at anti-air turrets, he develops an understandable dislike of the local big baddie - a sausage-fingered fellow called General Di Ravello - and takes up arms with the resistance. From there onwards, the overarching goals of the game are more or less taken as read: help the resistance forces take back the land, destroy anything that the military considers valuable enough to give a fresh coat of paint, and of course, push the good General into an active volcano.

So there I was, recently spat out by the tangle of tutorials and awkward character development into the world, and was able to finally appreciate the ways in which this sequel had streamlined a formula that I, in 2010, had believed to be nigh-perfect. The thing that made causing chaos in Just Cause 2 so satisfying - apart from overloading on cathartic overblown destruction - was that it tempered the mindless destruction with a certain amount of creative potential, letting you stick explosive charges in unusual places and tie all kinds of things together with the grappling hook. A pity, then, that Rico could only carry as many explosive charges as he could fit in his back pocket, and that the grappling hook had the tensile strength of dental floss, limiting what you could realistically do somewhat. Just Cause 3’s tools give you considerably more opportunities to set up destructive performance pieces, giving you access to a bottomless supply of explosive charges, tiny rocket thrusters that can be affixed to any surface, and numerous pieces of civil infrastructure carefully engineered to collapse in complex ways if you target them just right. Sounds overpowered, and perhaps it is a little bit at times, but there’s enough adversity left in the island’s occupying forces to stop the game feeling like an endless line-up of sun-kissed sandcastles to aimlessly kick over. If anything, thanks to the prevalence of tanks able to lead their shots like Tribes-addicted physics majors, it's even tougher than its older brother. 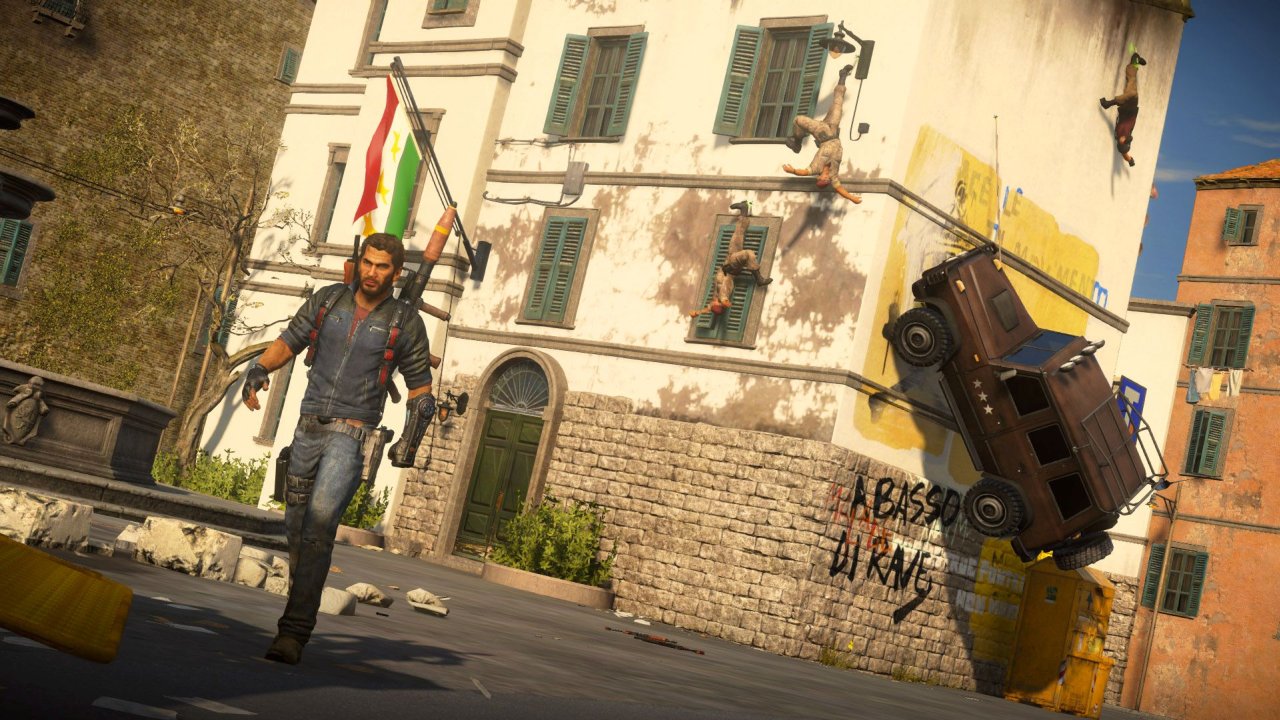 And then there's the upgraded grappling hook, which is quite possibly the most fun I've had with a physics toy since Garry's Mod gave me the power to put ragdolls in compromising positions and then crush them all with shipping containers. Not only is Just Cause 3's grappling hook capable of retracting at will - letting you drag props around without tying them to a forklift or something - but with the right upgrades it becomes frightfully strong and capable of supporting multiple tethers at once, both of which were only possible in Just Cause 2 if you liked installing dodgy mods that crashed every five minutes. Finding new and inventive ways to utilize the grappling hook comprised the bulk of my favourite moments with this game; not just in terms of its destructive potential, but just in terms of seeing how the world reacts when you start toying around with it.

Tying a helicopter to the ground and watching it spiral out of control almost immediately is enough to earn a smile, but it's nothing compared to suspending a helicopter between two spires and watching it hopelessly struggle like a fly in a Kevlar web. Watching radio towers collapse into neat little piles of pieces is alright, if you're still impressed by rigid body Havok physics for some reason, but it's far more entertaining to pull one over in such a way that it rains debris all over the firefight you're currently engaged in. Your new tools feel full of potential, and much like its predecessor, the game does you a service by having little to no guidance (outside of the obligatory tutorials) on how to apply them to the world around you. It's up to you to discover their uses and decide on how they're best utilised, creating an experience that manages to be both destructive and weirdly creative.

Unfortunately, most of them aren't going to be working at full capacity until you've tussled with the progression system, which takes the elegance of Just Cause 2's chaos system and feeds it through a rusty mincer. Just Cause 3, in comparison to its more anarchic predecessor, is evidently trying to shed some of its uncomfortable “wait, isn't this just government-sponsored terrorism?” exterior by having you consciously “liberate” areas - including towns and bases - rather than just speeding through them shooting at anything painted red. Liberated areas are automatically taken over by resistance forces, and while it is a little cheering to feel as if you're having a tangible effect by slowly creating more and more areas free of Di Ravello's control - complete with citizens who are confusingly eager to egg on the mysterious agent who just blew up half their town - as a system of progression it turns the business of causing chaos from a carefree romp into a completionist slog. 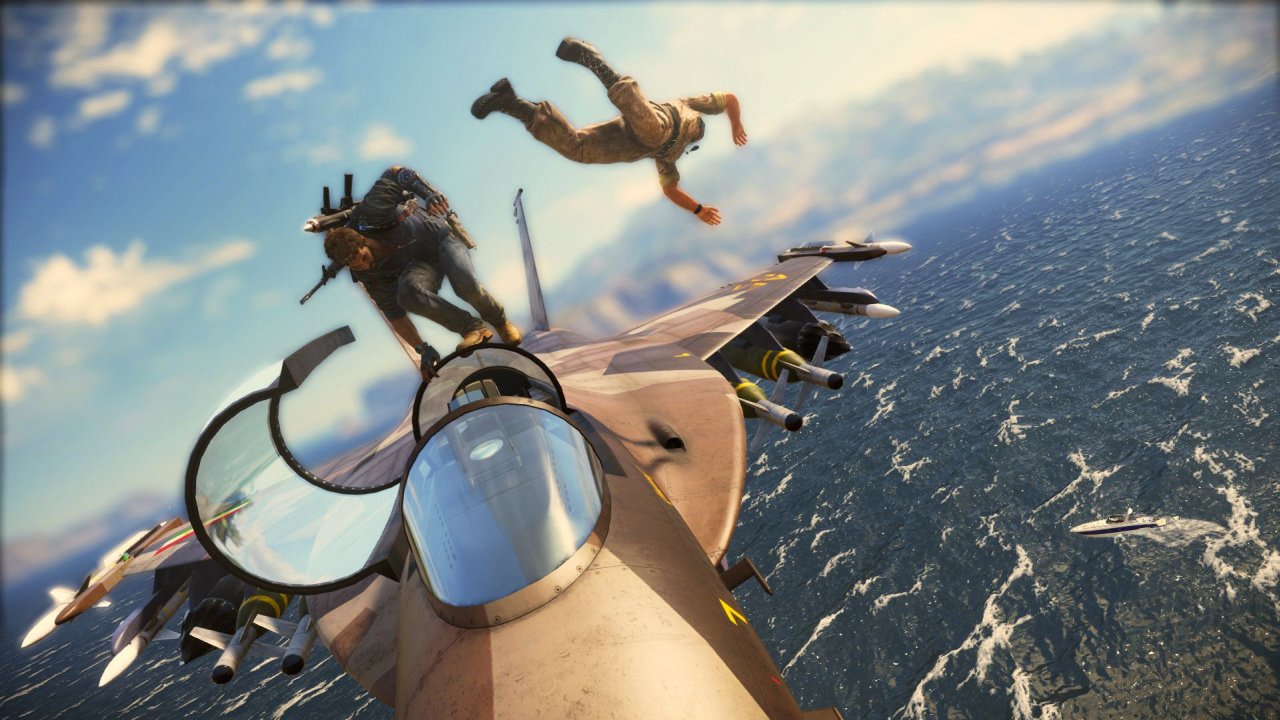 Let me explain. Equipment upgrades are unlocked by doing activities - racing, going on rampages, driving things really fast into other things - and activities, along with story missions, are unlocked by liberating areas, so if you want to play with all Just Cause 3's best toys then you're going to want to free as many places as possible. The problem is that in order to liberate an area - and hence, make any kind of practical progress - you'll need to hunt down and destroy every last piece of government property in the area: every fuel tank, every propaganda tower, every statue, every billboard, everything. You even get a bloody checklist on your HUD showing everything still requiring your attention, like you've just been instructed to find twelve sewer rat skins and kill five gnolls. Some of the tasks you get lumped with don't even come with the promise of satisfying destruction, but just ask you to carry out busywork like turning off monitors or raising a flag in the town square.

Just Cause 2's chaos system might've been difficult to explain in the context of the plot at times - how exactly did making more things explode grant me the right to use a helicopter, anyway? - but what was admirable was that it was so inherently freeform: anything that generated chaos, from completing side-missions to shooting a single oil drum, would put you a little closer to the next unlock, so you were free to carve a merry swathe of destruction through the world without having to stop and carefully make sure that you hadn't left something intact somewhere along the way. Even just casually hosing down a military base with helicopter minigun fire on the way to somewhere more important would give a small measure of progress. Just Cause 3's system turns destruction into a chore, like pruning a hydrangea that occasionally sends swarms of aggravated but ultimately ineffectual bees after you. It hardly seems fair to call it 'chaos' anymore - though the game still keeps a tally of your total chaos for some baffling arcane reason - when you're practically rewarded for being as methodical as a data entry clerk. 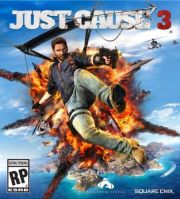 736. This War of Mine
PC
Related Games

All videos for Just Cause 3 (9)
Advertisement ▼