Once upon a time, video games offered relentless and challenging gameplay that truly tested a gamer’s skills as well as their mettle. They proved that while seemingly simple when it came to aesthetics, the complexity and depth lied in the gameplay itself, and provided the individual with a unique experience - which often proved to be hard fought along the way. Bard’s Gold, by indie developers Pixel Lantern, sends us on a nostalgic adventure back into this golden age of gaming, harkening back to a time where gameplay reigned supreme and graphics and narrative were secondary. As you might expect from a retro throwback of this caliber, there is nothing earth-shattering to be found in this title, but it is still a relatively fun experience in its own right, and at least partially reminds us why many hold these types of old school games in high esteem. 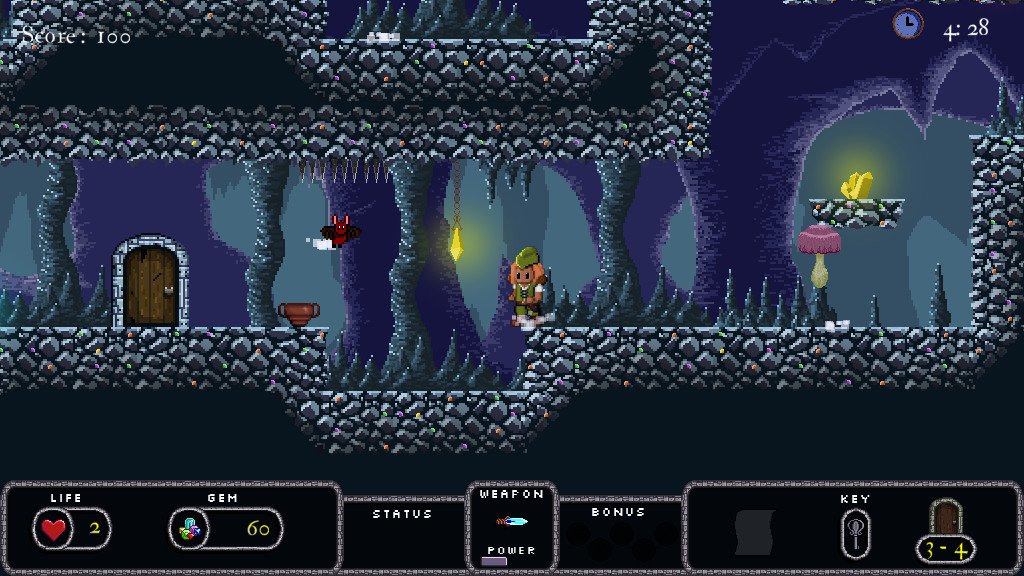 The game takes a proven formula of 2D platforming and dungeon crawling intensity that many old school games have long explored, and provides a bit of its own flair that helps give it its own personality. Make no mistake though, the game will likely have a very familiar feel to it upon jumping into this dangerous fantasy world, even if you rarely play video games. Bard’s Gold is brimming with traditional dungeon crawling elements (most of them dangerous) that stand in your way and will frequently lead to your premature demise. These obstacles include spikes, floating platforms, and pressure-sensitive traps that launch projectiles. This diverse and deadly slew of enemies each come with their own somewhat distinct behaviors that the player must generally recognize if they hope to have a fighting chance. They range from the classic slimes, to intimidating giant worms and skeletons that appear to be sporting boxing gloves, to trippy floating eyes and deadly flying tombs.

No matter how experienced a gamer you might claim to be, there is simply no getting around it - this is one tough game, particularly when you begin, as you are sent into the wilderness with nothing but a dagger and your wits to keep you alive. You will die, frequently. And what’s worse, once you lose all your lives, that’s it. Back to the beginning you go, with little to show for your efforts, aside from the gems you have gathered throughout your playthrough.

These gems can be put towards one of a select few, but nonetheless useful permanent “upgrades,” such as extra hearts, greater range with your dagger throw, or increased attack power. While this will seem like a small payoff for such a hard fought undertaking - especially considering how much of your precious gems these cost - over time they do indeed help you in future playthroughs. Soon enough you will find that you have enhanced your hero’s abilities just enough to power through the stage you have been stuck on for hours. However, even if you’ve gotten to the point where you can completely overpower enemies, there still exists the prevalent threat of being nailed by falling spikes or hit by projectiles, which will quickly put you back in your place and take you out before you knew what hit you. I actually found that these frequent traps ended my run more often than the enemies, to the point where I felt they were a tad unfair and perhaps overdone.

At the end of each of the four major stages, you are thankfully given permanent checkpoints, granting you some real progress aside from simply beefing up your character’s purchased abilities. However, you will likely find this game tedious and downright frustrating at times, as each of the four stages come with several sub-levels, which do not permit you to save until you have reached the end boss of that major stage. Because of this, you will probably find yourself replaying the stage a mind-numbing amount of times before you finally make it over that hurdle and unlock the next one. This can bring a relatively slow moving gaming experience to a near crawl at times. 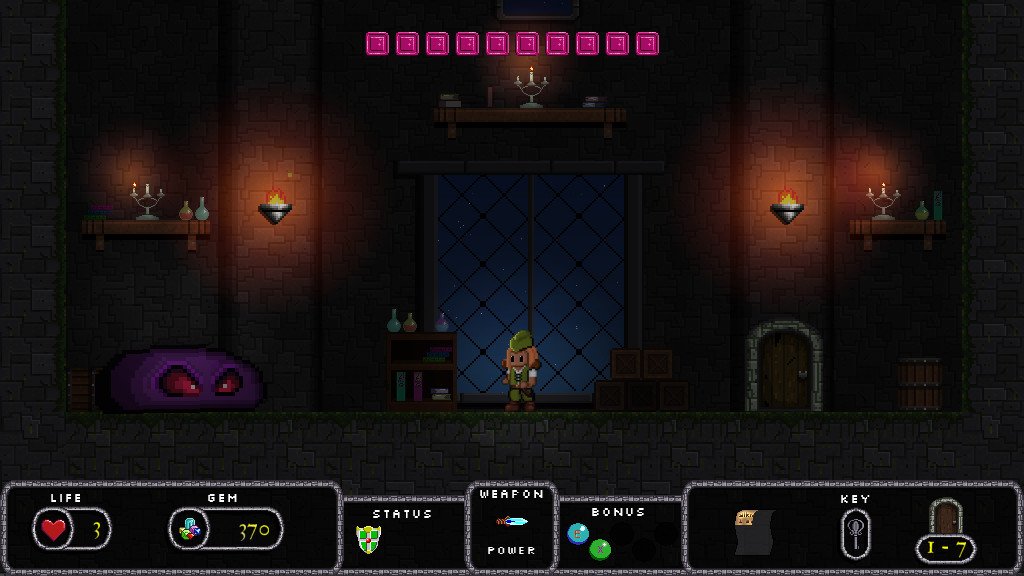 Further contributing to this grind is the very small amount of lives you are granted, depending on which of the three game modes you select. “Normal mode” provides you with a somewhat workable three lives off the bat, while “retro mode” ups the ante by granting you only two. Then there is the hellish “hardcore” mode, in which you have merely one shot (albeit with a small health bar, at least) and absolutely no checkpoints - truly putting your hardcore gaming skills to the test. The latter two difficulties, however, provide you with a greater bounty of gems, giving you at least some incentive to venture out of your comfort zone and give these modes a whirl, and they also provide you with a bit of variety. Either way though, until you’ve unlocked enough power ups and abilities to make your hero a bona-fide killing machine, you will probably find yourself fighting your way through the same stage multiple times.

The developer was seemingly very aware of this potential for repetition though, and has wisely created a somewhat random level generator for each stage, so that your playthrough is always at least partly different. I say “partly”, because this generator doesn’t spit out truly randomly generated stages, but rather, it will draw from a larger pool of pre-made levels and throw a smaller portion of them at you in varying sequences each time you play. Yet, after logging enough time, you will still eventually recognize the same sub-levels showing up. Not that this is necessarily a bad thing though, as this allows you to learn their workings through trial and error, giving the game subtle puzzle characteristics in addition to the traditional platforming and dungeon crawling experience.

Indeed, in a sense you are in fact encouraged to take your time throughout the majority of this game, and soak things in as you carefully make your way through the dangerous caverns, dungeons, and other eerie, desolate environments. On top of this, you are required to seek out a key in each sub-level in order to open the door to the next stage, further adding to the sense of urgency and forcing you to use the old noggin a bit, rather than just mindlessly fighting through enemies. If that weren’t enough, there exists an intimidating time limit that helps keep you on your toes - and should you let the timer run down to its limit, you will find yourself scurrying to the exit as a barrage of apocalyptic fireballs rain down from the skies. I can’t say I saw that one coming.

There is a Metroid-esque sense of urgency, isolation, and vulnerability that gets the adrenaline going, which is impressive for what otherwise might be considered a slow-paced game. This is particularly apparent when you are riding your final life and/or treading through dangerous areas with few or no powerups to assist you. 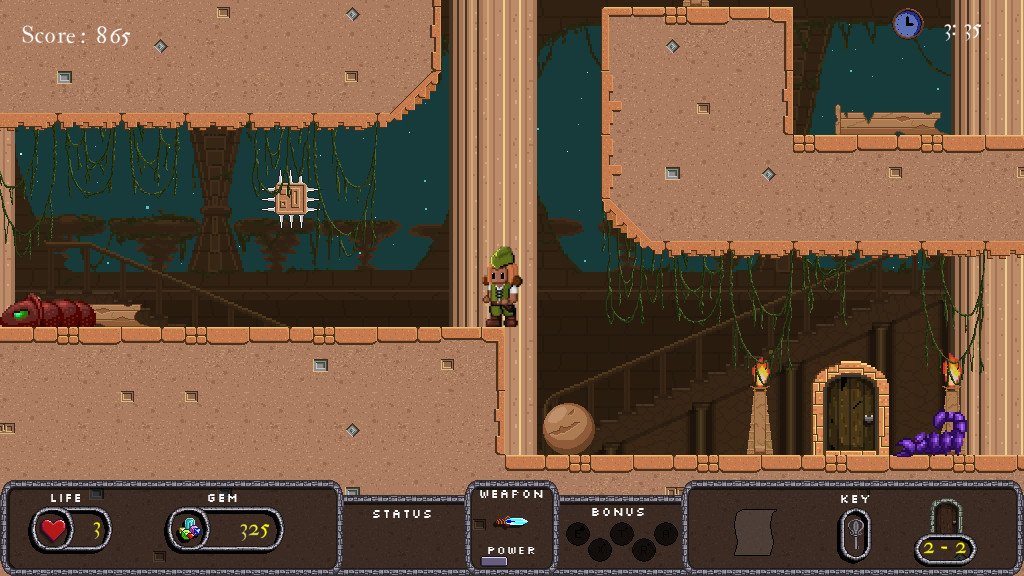 These aforementioned powerups and items include stronger weaponry, increased time limits, extra lives, shields, and magic glasses which help you to pinpoint hidden treasures, and even allow you to unveil secret areas rife with tougher enemies and even more riches. These can all be conveniently purchased in shops that frequent each stage, and while they do help quite a bit, they also ironically make things more intense, and at times, infuriating. This is because, unlike the permanent abilities you may purchase following the end of your run, these in-game items and abilities vanish upon a single death, making survival all the more necessary.

Aesthetically, there isn’t much to say about the game. The graphics are pretty basic, but they were undoubtedly meant to be that way, and they do a good job of simulating the charming 8/16 bit style. The music consists of simple fantasy-esque, inquisitive sounding melodies that compliment the atmosphere and style of the game quite nicely. With that said though, the music, much like the gameplay itself, can grow a bit repetitive over prolonged playthroughs.

The controls are responsive and tight, if not a little herky-jerky at times. Using the keyboard and mouse setup for a game that requires fast reaction and precision makes an already challenging experience downright ridiculous at times, though thankfully Bard’s Gold comes with controller support, making things instantly simpler. It is definitely recommended to go the controller route if you really want to make a serious run in this game.

At the end of the day, I did enjoy my dungeon-crawling survival experience throughout much of the duration of Bard’s Gold. There were plenty of maddening, as well as some tedious, moments to be had, though most of these came as a result of my own errors and shortcomings, rather than from poor game mechanics or design. The difficult nature of this game plays more as a strength than a weakness, as it simulates that retro feel and gives you a greater sense of accomplishment when making real progress. There were certainly occasions I felt the traps and falling spikes were too frequently and abruptly thrown at me to the point of being a bit unfair, but even these can usually be avoided through enough trial and error, as well as fast reaction time. 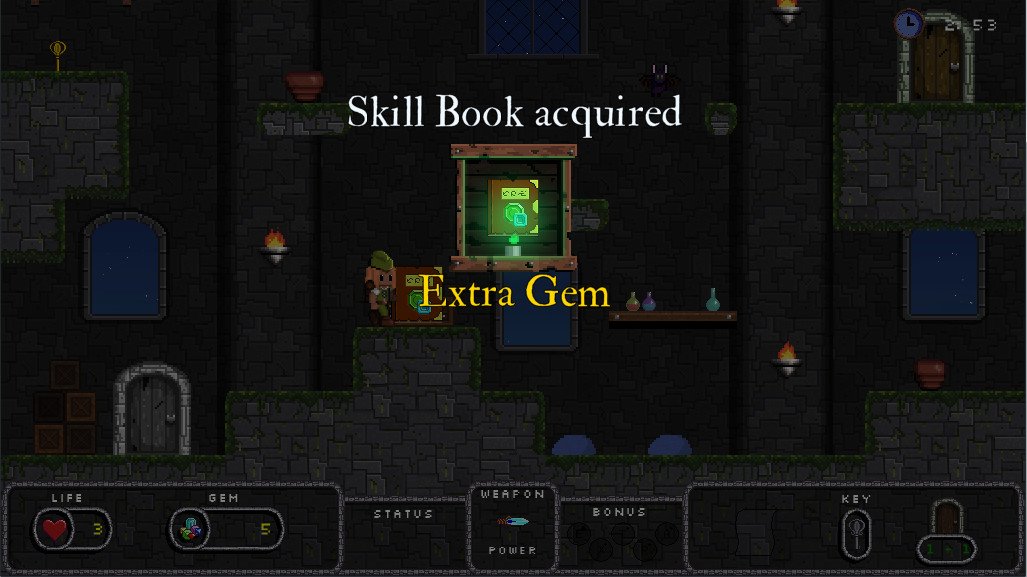 Bard’s Gold rewards grinding for upgrades and progression as much as it does for pure, oldschool gaming skill, and thus treads the line pretty nicely between accessibility and hardcore difficulty. Though it certainly leans towards the challenging end of the spectrum, the game is, at the very least, relatively simple to wrap your head around, and makes it pretty easy to jump right in and play. What you see is pretty much what you get with this one, but luckily you get an overall solid retro platforming experience with Bard’s Gold. At a budget price, it’s safe to say this one is worth checking out, as long as you’ve got a fair amount of patience, and are willing to engage in some occasionally tedious grinding during your journey.

Our ratings for Bard's Gold on PC out of 100 (Ratings FAQ)
Presentation
70
The game presents four distinct worlds which, while not mind blowing, provide their own feel and add to the game’s atmosphere of eerie isolation. The graphics and music both accurately emulate that nostalgic retro charm, though neither particularly stand out stylistically.
Gameplay
76
There is a nice balance of simple mechanics/concepts and difficulty in the gameplay. You usually get rewarded or penalized both from the time you put into it, as well as your raw gameplay skills. Which, for my money, are some of the key ingredients for a quality game.
Single Player
66
Those looking for some deep narrative, or even a fleshed out single player campaign may want to look elsewhere. Frequent dying leads to some repetition. Yet the game offers an overall memorable experience, and hours of fun along the way, enhanced by an online ranking system.
Multiplayer
NR
None
Performance
90
The game runs smoothly and was glitch free in my experience.
Overall
70
Bard’s Gold comes off largely as a homage to tricky hardcore dungeon crawlers. But it is solid enough in its own right, proving to be fun, addictive, and rewarding, despite its somewhat simplistic concept and the often grueling gameplay that can lead to some frustrating moments.