Despite its short length and often uninspired side quests, Mass Effect is a highly enjoyable, highly cinematic action RPG that should be played by shooter and RPG fans alike

With Mass Effect, it is immediately apparent from the start of the game that BioWare, while very skilled developers, aren’t very original. Before Mass Effect, BioWare had worked on the Star Wars: Knights of the Old Republic (Kotor) games, and had done an excellent job of bringing George Lucas’s incredibly famous Star Wars universe into the video game world. It seems that with Mass Effect, BioWare still has a head full of science fiction, and decided to make their own Star Wars universe. While the world(s) that ME takes place on are very rich with back story and history, almost everything about the Mass Effect universe reflects or mimics the Star Wars universe. Luckily, the folks at BioWare did such a fantastic job with it that you honestly won’t care that your ‘biotic’ powers in ME are uncannily similar to the ‘force’ powers in Star Wars. It’s just a shame that they didn’t put more time into polishing and side quests, because were it not for a lack of polish and bland side quests Mass Effect would be near perfection.

As it stands, the main story component in the single player campaign can be completed in around 12 hours, which pretty short for an RPG. The flip side of this is that the entire campaign is very well paced and never boring or repetitive. You will move from one incredibly dramatic and epic set piece to the next with hardly a minute to catch your breath. The environments are highly varied and often stunningly beautiful, and the cinematic style of presentation is probably the best I have ever seen in a video game. The musical score is near perfection for the setting; a soft, throbbing techno that plays in the background quietly during dialogue sequences which rises to higher volumes and intensity during important moments in missions. The overall extraordinary quality of the story missions makes you want to continue playing through, and hardly gives you any good opportunities to go off and complete side quests.

Once you do finally tear yourself away from the story arc and go in search of side quests to beef up your character level and play through time, you will be underwhelmed by the options. You usually either have to go talk to someone and convince them to do/not do something, or drive around on some god-forsaken and completely desolate planet looking for a lost squad of scientists or investigating a strange signal. These sections are made even weaker by what is possibly the worst vehicle handling I have seen in a high profile game. You drive a kind of all-terrain space buggy called the MAKO, which stubbornly refuses to drive in a straight line. You will be driven to near hysteria as you weave back and forth, trying in vain to aim at an enemy soldier who is happily plinking away with his assault rifle. These sections are by far the weakest parts of the game, and feel like they were added on as an afterthought so they could add a higher number of play through hours on the back of the box.

Other than these disastrous driving sections, the core game play is excellent. The combat is a hybrid of Gears of War style third person shooting, complete with a cover system, and pause-and-play tactics. At the beginning of the game you will choose between a handful of classes, each of which plays a bit differently during combat. Some classes are based around shooting enemies, others are based around using biotic (as I said earlier, basically force) powers to lift, throw, and push and freeze your enemies so that your teammates can shoot them without risk. There is also a tech class where your character can sabotage enemy equipment, and a few hybrid classes. The gunplay is surprisingly good, and the game is very competent as a shooter, although some enemies like to run up to your face and start hitting you even when they have guns. A nice feature is that when an enemy gets close enough, your character will automatically switch from shooting mode to melee, which is convenient in some of the more frantic battles. You also control 3 party members, and while you cannot take direct control of them you can order them to move to specific places and use specific powers at any given time. If any of your party members go down during a battle, they will be automatically revived once you kill all of the enemies in that area.

The inventory and equipment system in the game is serviceable, although your inventory will fill up pretty fast and you will have to spend a fair bit of time sorting through your gear deciding what to drop. The weapon design is interesting; there are 4 classes of weapons, pistols, shotguns, assault rifles and sniper rifles. Only the soldier class can use all of these weapons effectively, while the others can use one or two types. Instead of ammo, each weapon has a specific number of shots which can be fired before it overheats, which is nice because you don’t have to spend a lot of time looking for ammo. Each weapon can also be upgraded with anti armour/flesh/etc. rounds and other modifications which will increase your weapons accuracy recoil, damage, etc. You will also wear one suit of armour which you can modify much like the weapons.

Being a BioWare game, Mass Effect has a lot of interactive dialogue sequences. Where things differ from traditional BioWare dialogue is that instead of choosing your full character response, you select an option from a choice wheel that represents the attitude and general meaning of the response which you will give, and your character, Commander Shepard, will actually speak the full line. The voice acting and facial animations are exemplary; even minor characters are incredibly well voice acted. The writing is also generally very good, adding to the already cinematic experience. When levelling up your character, you can choose to put points into persuasion and intimidation, unlocking more dialogue options, many of which are the most interesting in the game. While the advertising campaign for the game bragged that a lot of important choices needed to be made, many of them will have the same end result. Imagine that you are trying to get through a guarded door by talking to the guard. If you are asking nicely to be let through or threatening to kill him, the end result is the same; you are let through the door. There are a handful of important choices to be made which will have major impacts on the way the game plays out, and as a result of this you will probably want to play through the game at least twice to see how choosing different options affects the story.

While Mass Effect looks and sounds very good across the board, it does suffer from an unfortunate number of crashing and freezing issues on nVidia cards especially. When I first installed the game, it wouldn’t even start without freezing, and it wasn’t until several months later, when nvidia released some new drivers that supported the game properly, that I was able to play it. When it does run properly, it looks and runs great, with environments ranging from desolate frozen planets to ruined alien cities to picturesque tropical islands. They all look great, and the game never gets even slightly repetitive during the main story missions because there is so much variation within the game environments.

Overall, Mass Effect is a excellent, albeit disappointingly short, action RPG experience. Its cinematic style of presentation is very effective in making up for the fact that the setting and story is not very original, and the solid core game play mechanics add to the experience in a big way. BioWare definitely could have done a lot more with the side quests, and should have worked a lot harder on polishing the game so that it was more stable and had more manageable vehicle handling, but these are only minor complaints which do little to effect the overall excellent experience of the main story arc, which branches out nicely and definitely deserves to be played through multiple times. Mass Effect is a game RPG and Shooter fans alike will enjoy, as long as the latter group doesn’t mind some slower, dialogue heavy sections.

Our ratings for Mass Effect on PC out of 100 (Ratings FAQ)
Presentation
89
Very good visuals and sound effects with some of the best character and facial animations I have ever seen. Musical score works very well with the setting. Great cinematic style.
Gameplay
89
Apart from the driving sections and some side quests, the gameplay is consistently excellent, combat is intense and fun, dialogue sequences are engaging and enjoyable.
Single Player
90
Although side missions are forgettable and the story arc is a bit on the short side, the well-told story and frequent memorable set piece moments make the experience a memorable one.
Multiplayer
NR
N/A
Performance
(Show PC Specs)
CPU: Intel Core 2 Duo e7200 @ 3.1ghz
GPU: Powercolor Radeon HD 5850 PCS+
RAM: 4GB DDR2
OS: Windows 7 Ultimate 64 bit

80
Although it has some stability and crashing issues (which have been fixed with newer drivers), it runs very well for how good it looks.
Overall
88
Underwhelming side quests and comparatively short length do little to detract from the overall fantastic and cinematic experience. Mass Effect is definitely worthy of multiple playthroughs to help add to the length. 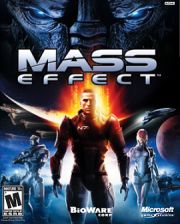 Our Review of Mass Effect
88%
Great
The Verdict:
"Despite its short length and often uninspired side quests, Mass Effect is a highly enjoyable, highly cinematic action RPG that should be played by shooter and RPG fans alike "
Game Ranking
Mass Effect is ranked #47 out of 1660 total reviewed games. It is ranked #4 out of 28 games reviewed in 2008.
46. Braid
Xbox 360
47. Mass Effect

All videos for Mass Effect (1)
Advertisement ▼