I didn’t know I liked the Weird West genre. Mostly relegated to literature, there aren’t many storytelling mediums that explore a dusty western world filled with demons, blood magic, and other supernatural elements. After spending a handful of hours with CreativeForge Games’ strategy title Hard West, the Weird West is a subgenre of fiction I’ll need to look further into. Hard West drips with style and tries to keep players engaged with deadly shootouts, but the core of the game leaves something to be desired. It’s a nice package of art, diverse gameplay, and narrative, but after a solid first impression, it failed to keep me engaged. 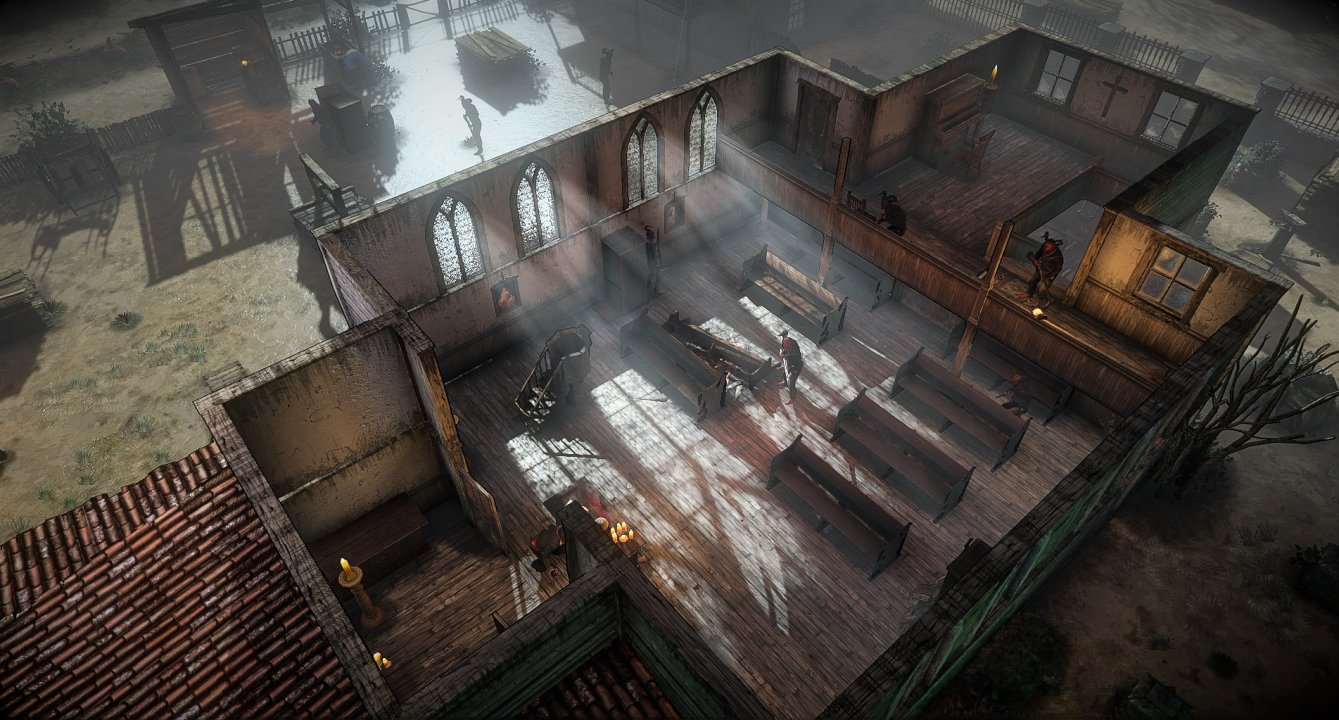 Hard West’s story unfolds over eight scenarios, leaping between characters and time periods. When the unnamed protagonist and his father set out to find gold in the west, they are quickly waylaid when the father purchases a cursed charm from a mysterious gentlemen. The charm turns the fortunes of our heroes sour and soon a happy family is left cursed and separated. Thus begins the journey of Hard West as these scattered characters attempt to change their fortunes and get revenge on those who wronged them.

The story is mostly told through the gravely voice of a single narrator doing his best Sam Elliott impression - which isn’t bad. When there isn’t a narrator there is often text which describes your interactions with secondary characters. These large chunks of text describe the action as you move through the overworld map. Unfortunately these text-heavy moments are all pretty dry and lack the atmosphere that fills the majority of Hard West.

The disjointed narrative, leaping from character to character, isn’t necessarily bad but it never attains a deeper level of connection. Even while it begs for involvement, narrating the action like a dungeon master, referring to the main protagonist in the 2nd person “you”, I couldn’t help but feel a detachment from the characters. I never rolled my eyes or felt the story was unbearably awful, but I also never felt a rooting interested in the characters other than to progress through the game.

The benefit to this multi-perspective storytelling is that it affords different play-styles throughout the game. Some of this is baked into the mechanics. When you first begin the story playing as the main characters and his father, you travel through an overworld map attempting to run a successful gold-mining operation. Then, when you switch to a rogue scientist trying to cure a mysterious plague, the overworld mechanics shift from gold collection to craft-heavy mechanics which focus on collecting blueprints and creating new items. It’s impressive how each scenario boasts its own overworld mechanics, completely unique to the part of the story it tells. But the fact that these mechanics are so briefly explored means you won’t find much depth to them. 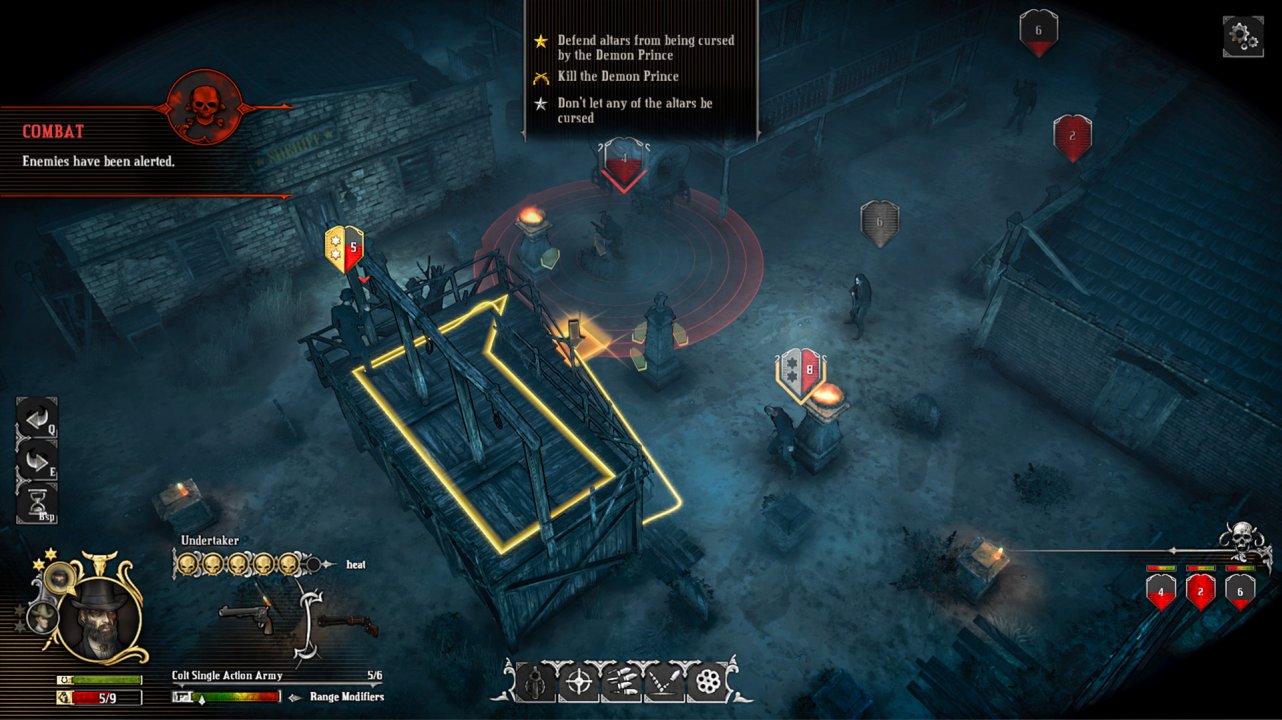 The different perspectives also allow players to treat the world in different ways. Playing as the main character in the early stages of the game, I tried to walk the straight and narrow and help my neighbors. But as the game grows darker and introduces characters with nastier personalities, it affords the players to revel in some of the darker choices without creating a dissonance from the story. Burning villages and murdering as servant of demons is just as fun as trying to protect the innocent, and Hard West allows you to do both.

About three times during each scenario players will be forced into the game’s turn-based shootouts. Channeling the combat mechanics of games like X-COM, Hard West puts a focus on staying in cover and flanking enemy positions. It tries to spice up this type of combat by introducing elements like Luck and adding in special abilities, but it never really succeeds in bringing it all together.

Luck is the key mechanic in Hard West. Whenever a character is shot at, their Luck meter will be depleted based on how much cover they have. A character whose Luck is at 100 and out in the open will still be able to dodge a shot, but a character behind cover whose Luck is at zero will most certainly be hit. However, when in cover damage is significantly reduced. This forces players to always try to stay hidden while equally trying to outflank enemies. The strategies become almost puzzle-like as you attempt to maneuver your characters through the map, always keeping them protected, while finding the right angle to take out the enemies.

There are some notable problems with Hard West’s tricky combat and the biggest one is that the rules don’t always seem set in stone. Sometimes I thought I had an enemy flanked, only to find out the game counted him as still in cover. Other times I felt like I was in a position to nail a sure fire hit, only to find out my to-hit chances were less than 50%. Even fifteen hours into the game, I couldn’t always guarantee my tactical maneuvers were going to pay off. 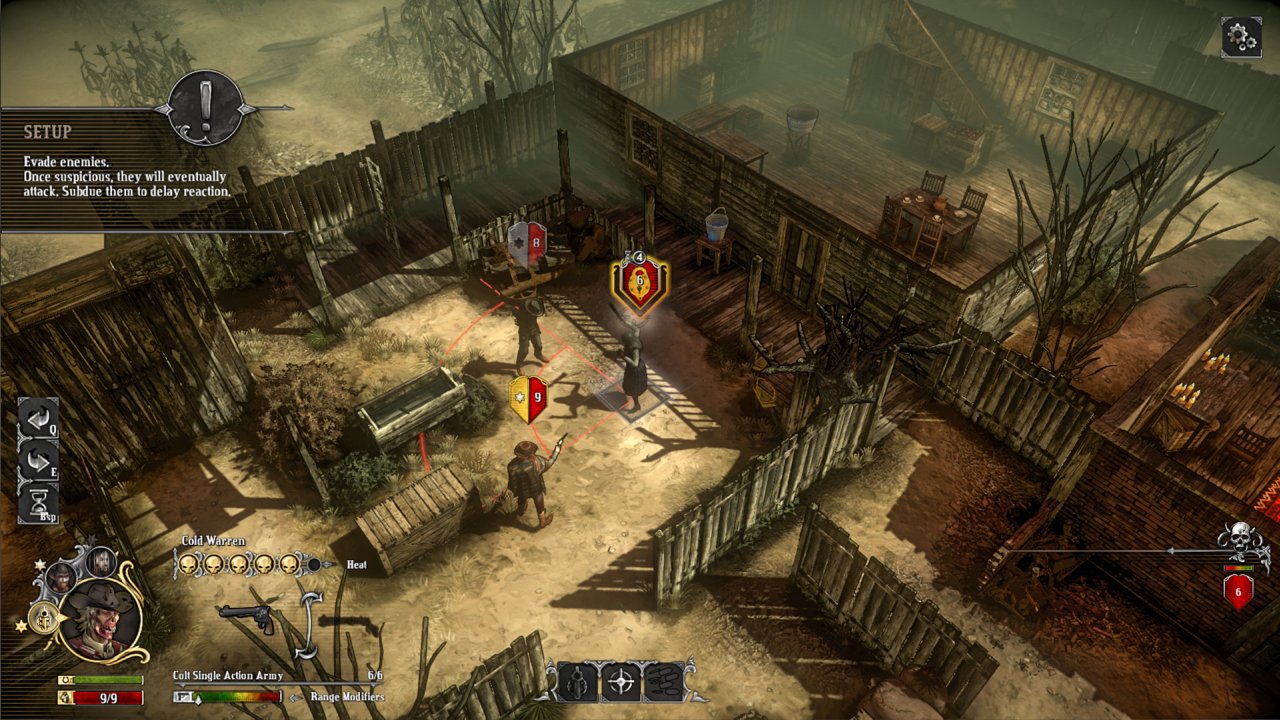 This frustration is heightened by Hard West’s punishing difficulty. A bad move can result in an instant death, and sometimes a single death can fail a fight. There’s no saving when you’re in the middle of these scenarios so a failure means you start the fight from the beginning. The difficulty would be great if the balance had been finely tuned, but because the mechanics of the game are difficult to suss out and you aren’t always sure if the numbers are going to be in your favor, it results in you playing overly cautious. It can take ages to complete objectives as you nervously creep your way through maps to make sure you don’t get taken by surprise. Instead of building tension, it just makes navigating maps a slog as you hyper-cautiously seek out your objectives.

The heightened difficulty also leaves little room for experimentation. Trying to use the abilities of certain characters is futile when every turn means life or death. Even when I did get the rare chance to experiment with abilities, some of them are difficult to use. The ricochet ability allows you to shoot a metal object and bounce the bullet at an enemy who is hiding behind cover. It sounds awesome, but the range is very small, so you need to be standing very close to an enemy in order to use it. When one wrong move can cost you dearly, there’s not much encouragement to take the risks that would allow these abilities to pay off.

In between fights you have the ability to equip characters with guns, clothing, and secondary items. The gun selection is interesting; players can opt for a quad-barrel shotgun which allows for four shots instead of the double-barreled two, so there’s some creativity, but it never evolves as the game goes along. Within a couple of hours you’ll know all the weapons and have sussed out those you’ll use and those you don’t care about, making gun selection almost meaningless before the halfway mark. When it comes to the inventory there’s little reason to carry anything but medical supplies to increase your health or heal yourself. Clothing can yield important bonuses, so seeking out a pair of spectacles or a Native American shirt can be important.

The best part about equipping items is the playing card bonuses. Completing tasks in the overworld and winning gun fights earns you cards which can be equipped on characters. Getting the right cards to form a good poker hand (flush, straight, full house) can give your characters important bonuses like a boost of health or better aim. It’s hard to know how to get these cards, so acquiring them is a little random, but it feels good getting a character that elusive royal flush for a crucial health boost. 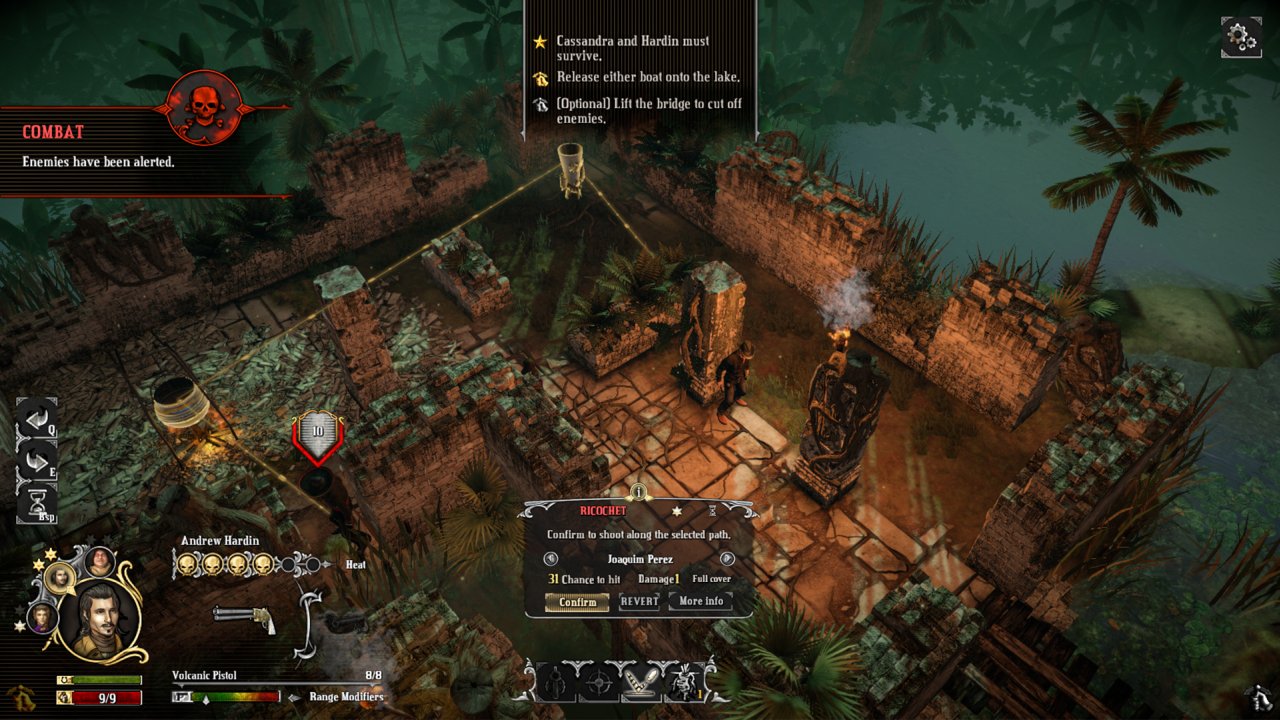 There was a clear vision for Hard West’s atmosphere. It not only comes through in the gruff narration and quirky weird west narrative, but it continues into the art and music of the game. The isometric camera angle doesn’t leave a ton of room for artistic design, but good use is made of the screen space and Hard West is filled with saloons, empty barns, graveyards, and rail stations. Perhaps the biggest testament to the art design is that while there are dozens of gunfights, you never feel like any two maps look the same. Clearly certain assets are reused, but the design is intelligent enough and the assets thoroughly mixed to keep things new. I wish the same could said for the soundtrack. The guitar and heavy drum beat tunes are fun and channels the energy of Hard West, but there’s only about four tracks and you’ll know them well by the time the game is over.

From a tech standpoint, there’s little to comment on. I hit a bug or two, but for the most part it runs fine and that’s important as having the game hit a snare during the long firefights would have been infuriating. Luckily, nothing of the sort ever occurred. The only problems I ever had were during the overworld and, like I said, there were only a couple.

Hard West has its moments. There’s clearly a strong concept of a game here that explores a genre unique to not only video games, but other forms of entertainment as well. It’s clear CreativeForge Games were focused on keeping the game unique and diverse throughout the experience with new mechanics constantly thrown into the mix and different character perspectives for players to explore. There’s a lot of smart ideas in Hard West, but the combat isn’t as fun as one would hope. The long shootouts preach high difficulty and clever tactics, but they end up being long slogs as you shuffle your way through the map, playing it safe and avoiding any tension. When the core of a game is as mixed as Hard West’s is, no amount of unique bells and whistles can save it.

Our ratings for Hard West on PC out of 100 (Ratings FAQ)
Presentation
84
The atmosphere of Hard West is excellent. From the narration and soundtrack to the western settings, the game feels consistent and creative.
Gameplay
63
There are good ideas in Hard West, but the final product doesn’t yield the results you would hope for.
Single Player
68
The story isn’t bad, but it’s hard to connect with the characters or overworld gameplay mechanics when they are changing every two hours.
Multiplayer
NR
None
Performance
(Show PC Specs)
CPU: Intel Core i5-3570K
GPU: Nvidia GeForce GTX 660
RAM: 8GB
OS: Windows 10 Home 64 bit

82
I hit a bug or two, but nothing that wasn’t quickly solved and nothing that occurred during the long shootout sequences.
Overall
69
It’s hard to deny the charm and wonderful atmosphere which so warmly embraces this unique subgenre title. There are some good moments in Hard West, but the overworld struggles with lifeless text-based action and the gunfights lean more toward frustrating than tension-filled. 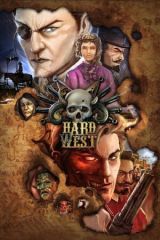