Mass murder seems to be a growing theme in videogames these days; as gamers continue to protest over the sexualization of women in videogames, most people seem pretty cool with the recent strings of “kill ‘em all”-themed games, from acclaimed hits like Hotline Miami to not-so-acclaimed shlock fests like Hatred. 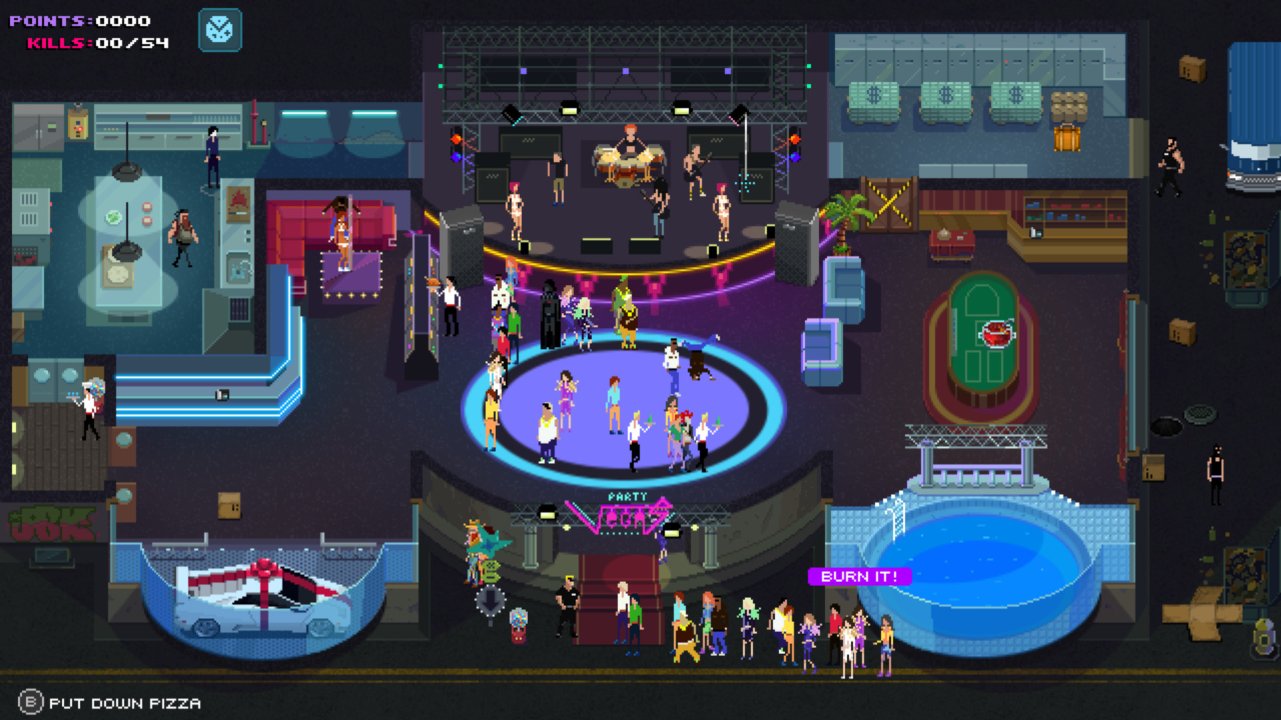 Party Hard is another game that mixes retro-style graphics and graphic brutality, where the goal is to mercilessly slaughter every single person in each stage. The story is that a masked killer has been driven insane by the frequent late night parties that disturb his sleep, and seeks to venture out into the world and leave every public shindig a bloodstained mess of death and destruction. The story follows the accounts of a police officer determined to catch the killer, with the grim and moody cutscenes directly contradicting the parodic mood of the rest of the game; the random insanity that occurs in each stage is like a Where’s Waldo meets Michael Myers fanfiction, with random aliens, vampires, movie stars and even Super Mario showing up at odd times to either party down or throw a wrench into the killer’s plans. Even police officers responding to the ongoing murders have no problem running over dozens of panicked partygoers in order to catch the killer in the act.

Armed with just a knife and a single life, Party Hard is a purely strategic game, where players must eliminate the targeted number of people in each stage without getting caught by police or killed by the various and often random hazards that happen along the way. Each stage is a massive layout of hidden entrances, doorways, windows and other points of entry, while also littered throughout are traps that can be activated with a single button. Turning on the oven in a kitchen, for example, will light that whole part of the house on fire, while messing with the electrical wiring near some speakers will kill the DJ and others nearby. For the standard knife kills, discretion is crucial, and players can dump off dead bodies at one of the many marked areas such as a dumpster or manhole (these spots never fill up either, allowing repeated usage). Should a body be discovered by one of the patrons, however, they will make a mad dash to the phone and call the police. Should you be seen dragging said body, or merely be within eyesight, then the cop will have a bead on your location, resulting in an instant Game Over should he manage to catch you. Fortunately, there are additional traps that can slow down or even incapacitate the pursuing police officer, who will eventually give up after some time has passed. 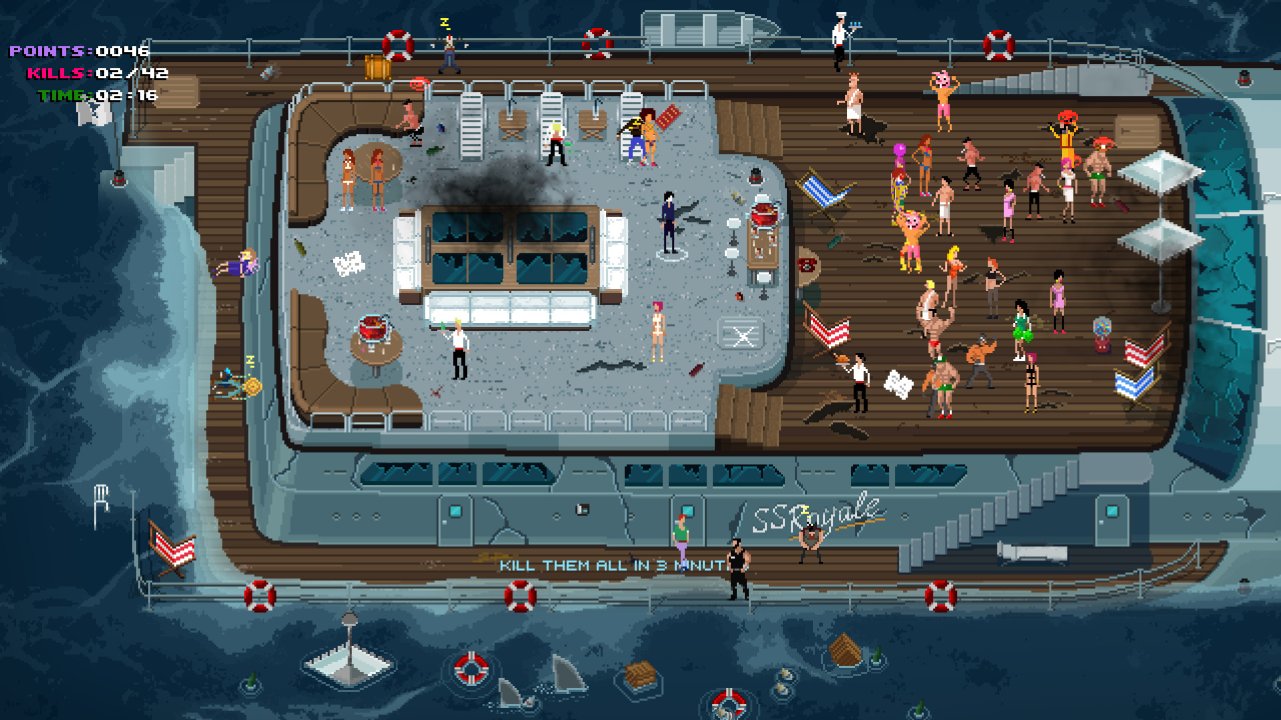 In concept, the process of killing discretely and uniquely can lead to some fun planning during each party, but in practice there are several factors that may keep players from partying all night. For one thing, each stage is zoomed out to fit in everything at once, which can make things hard to see depending on whether you’re playing on a monitor or big screen TV. The detection system is also arbitrary at times and often fails to follow a specific logic: sometimes the killer can be spotted a mile away or through walls, other times they could be killing people mere inches away without anyone’s notice. More often than not this will lead to many frustrating deaths, resulting in having to restart the stage from the beginning. A lack of checkpoints and a very slow moving speed will undoubtedly irritate, though there is also the satisfaction in literally getting away with murder.

Aesthetically, the game owes much to Hotline Miami, from its retro pixel-heavy visuals to its vibrant color scheme as well as a toe-tapping soundtrack filled with bass-heavy beats. It’s a nice look that is once again marred by a wide view camera angle, but the variety of random encounters can lead to some amusing imagery; a nightclub can suddenly be invaded by a flying saucer filled with aliens; a drug deal leading to a shootout with SWAT can happen in a house party; a familiar-looking plumber can lock out various escape routes. The rules are constantly changing in Party Hard, and it’s up to eagle-eyed players to use the situation in their favor instead of being hindered by it. 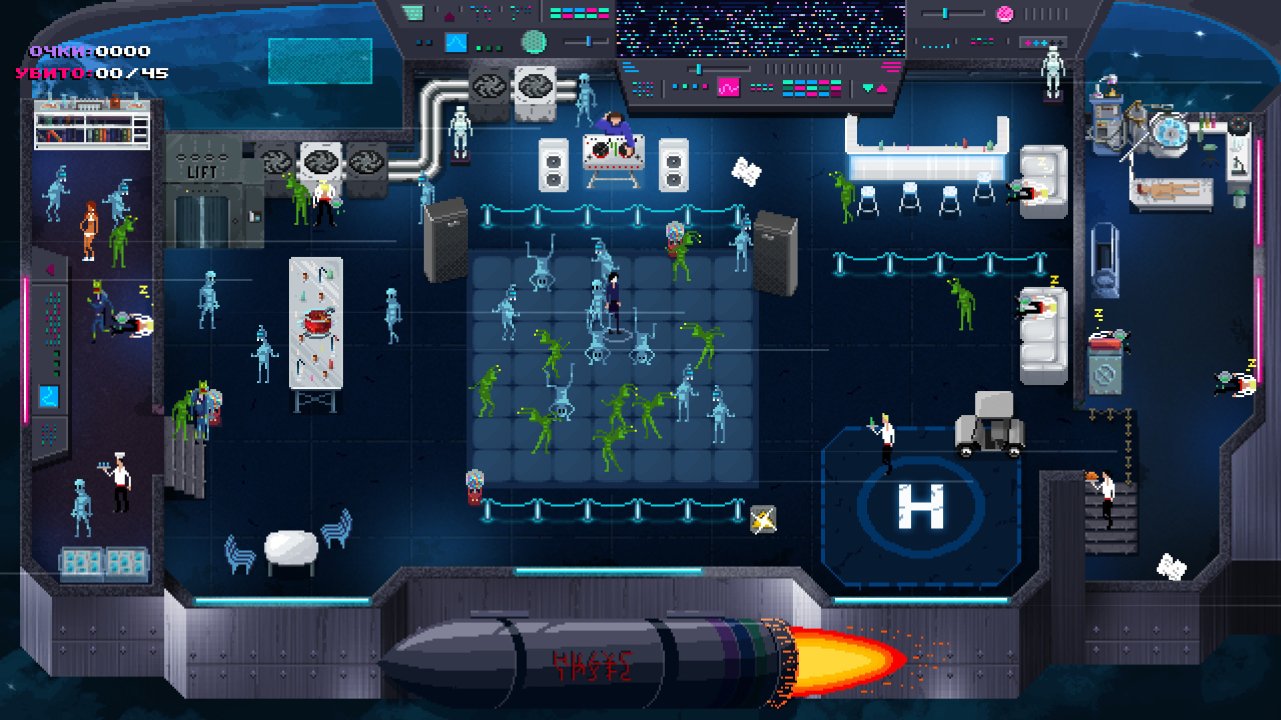 Overall, Party Hard is a unique idea that is short of a few necessary bits of polish and a gentler learning curve. The methodical pace may cause action-heavy players to give up early, but with a bit of patience and a better understanding of the various mechanics, the most patient players will get the most fun out of it, while the unlockable extras and free updates to keep the partying (and murdering) lasting until question mark.

Our ratings for Party Hard on PC out of 100 (Ratings FAQ)
Presentation
70
A familiar retro style and neon lighting that is clearly inspired by Hotline Miami. The view distance may prove problematic depending on your monitor setup.
Gameplay
60
Each stage is a fun playground to dump bodies in, but the slow walking speed and inconsistent logic hampers an otherwise enjoyable experience.
Single Player
65
Lots of stage variety and unlockables, but requires a lot of patience and planning in order to see it through to the end.
Multiplayer
NR
None
Performance
80
Loading times are decent, and the catchy soundtrack comes through nicely. Some wonky D-pad controls make this an analog-only affair for people playing with controllers.
Overall
60
A lack of polish and a steep difficulty curve means that only the most patient of players will get the majority of enjoyment out of Party Hard. 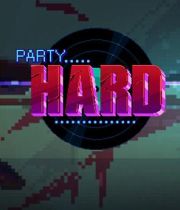 Our Review of Party Hard
60%
Adequate
The Verdict:
"A steep learning curve and unpolished mechanics risk crashing this party"
Game Ranking
Party Hard is ranked #1382 out of 1635 total reviewed games. It is ranked #97 out of 110 games reviewed in 2015.
1381. Always Sometimes Monsters
PC
1382. Party Hard