FlatOut: Ultimate Carnage is an arcade racing game featuring high speed crashes and loads of destruction. It’s a highly polished version of FlatOut 2 with a few new modes, graphical enhancements and gameplay tweaks. Like FO2 the race tracks are littered with objects like barrels, cars, barns, rocks, lampposts and devastation is created by simply racing around a track crashing into things either on purpose or accidentally. As you slam into undisturbed items you get a nitro boost, you also get boosts for crashing into AI opponents encouraging you to smash each other in order to gain speed and the lead. It has two broad game modes, FlatOut and Carnage, along with single race events and multiplayer. FlatOut mode is like the previous games, a series of events in which you need a podium finish in races to progress, also featuring unlockable stunts and time trials once events have been completed. Carnage mode is a tiered series of races and stunts in which you attempt to get points to unlock the next events, which includes a beat the bomb race mode. The stunts associated with both carnage and race mode range from ski jumps, goal scoring, darts, cards and ten pin bowling. To perform a stunt you simply drive a car to a launch zone then force your driver to crash out and fly through the windscreen into the air at a certain angle and speed. You can then manoeuvre your driver in the air or launch him further with a nudge. 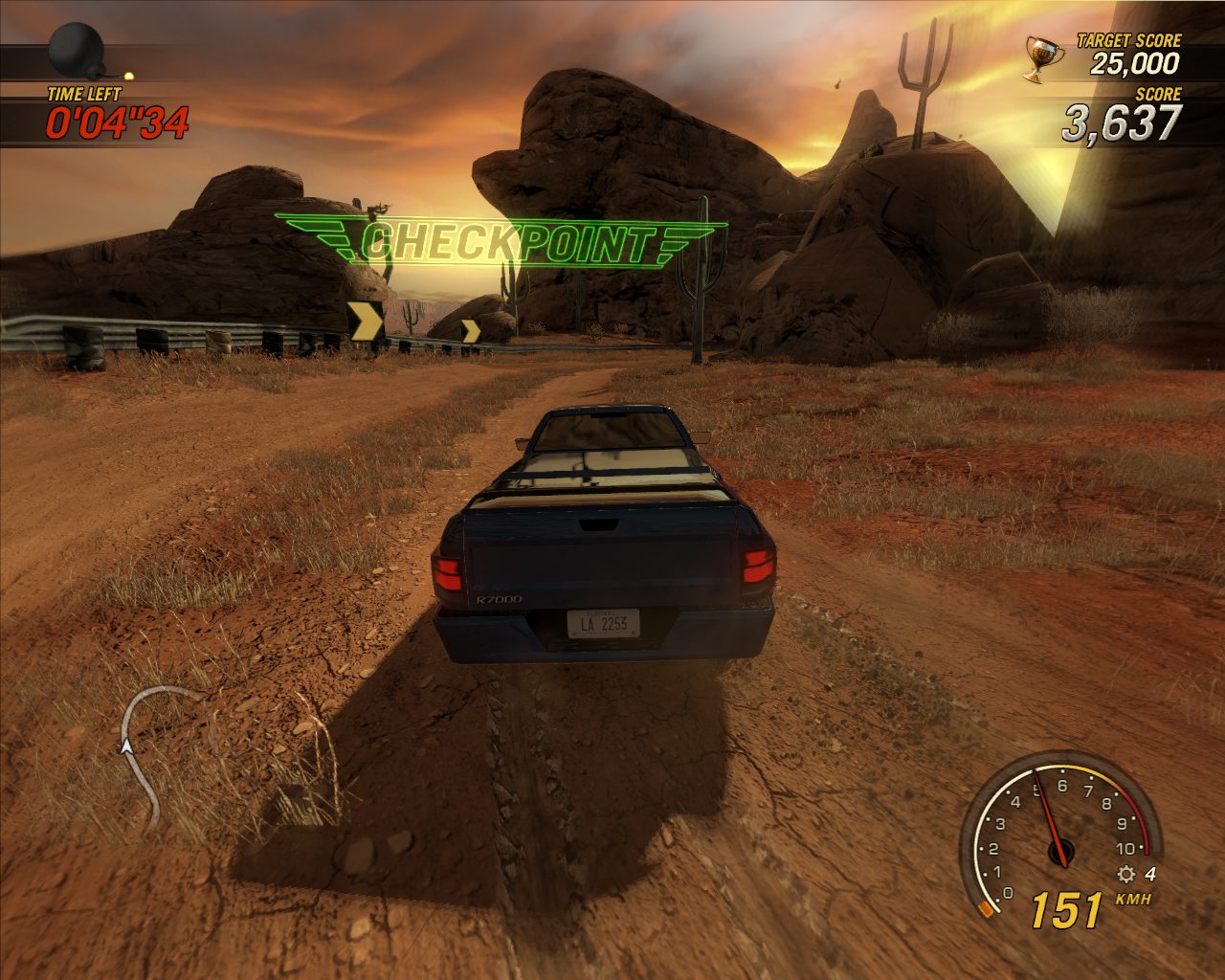 As a pure arcade destructive racer FlatOut UC thrives on its own. There are easily hundreds of physics objects to destroy or otherwise send flying about, and cars get suitably damaged during the course of a race, especially longer races. Damaging cars and the environment adds to your nitro boost helping you speed up if you’ve just had a relatively large crash. The included tracks are very similar to FlatOut 2 and it’s a pity there aren’t more new tracks here, but the existing ones are well constructed with jumps and alternate routes. Thankfully the physics objects in UC won’t knock you around as much as FlatOut 2, so small objects won’t send you flying and only partially impede your steering around corners.

Graphically UC is also a pretty nice looking game it’s very clean, cars start off shiny and crisp with a nice chrome finish and end up looking like a mangled mess barely dragging themselves across the finish line. There are suitable and not overdone blur effects when nitro is engaged, the sparks, dust and dirt effects are also excellent to see in motion. The quality extends to the tracks, which are nicely lighted and feature guard rails on corners to keep the car in forward motion. It’s worth noting that although the tracks do repeat they often change the time of day so things look a little different even if you are still going the same way on the same road. Along with the race modes you’ll get derbies, which are basically just small confined areas where your objective is to crash into others while protecting yourself. This mode is later extended in Carnage with powerups that increase car weight, increase hit damage or restore your car’s health. The mode you’ll probably be spending the most time with is the FlatOut race mode.

FlatOut mode is all about racing, avoiding being crashed into and getting to the front position. In FlatOut mode you get bonuses for causing crashes via extra nitro but if you can’t successfully pull off a collision and recover quickly the chances of getting a podium finished are reduced. Essentially you’ll be driving defensively, covering your line, knocking others out when you have a good chance to continue without issue. The AI is fairly good and can be quite aggressive at times so it’s vital to be aware of their position on the track around you. In most races a heavier vehicle is a good choice, it has a higher damage tolerance preventing being wrecked easily, and it has a higher weight to wreck other cars and to crash through barriers without being bumped or knocked from race line. Of course these heavy cars are slower and in shorter racers or time trials you will require a faster upgraded vehicle that you will need to purchase at the car shop using credits earned for winning events. You can buy upgrades for all the vehicles which range from engine to body alterations, although they don’t change appearance only the stats. Owning a fast car and a heavy car in all three classes, Derby, Race and Street will hold you in good stead to complete on top. 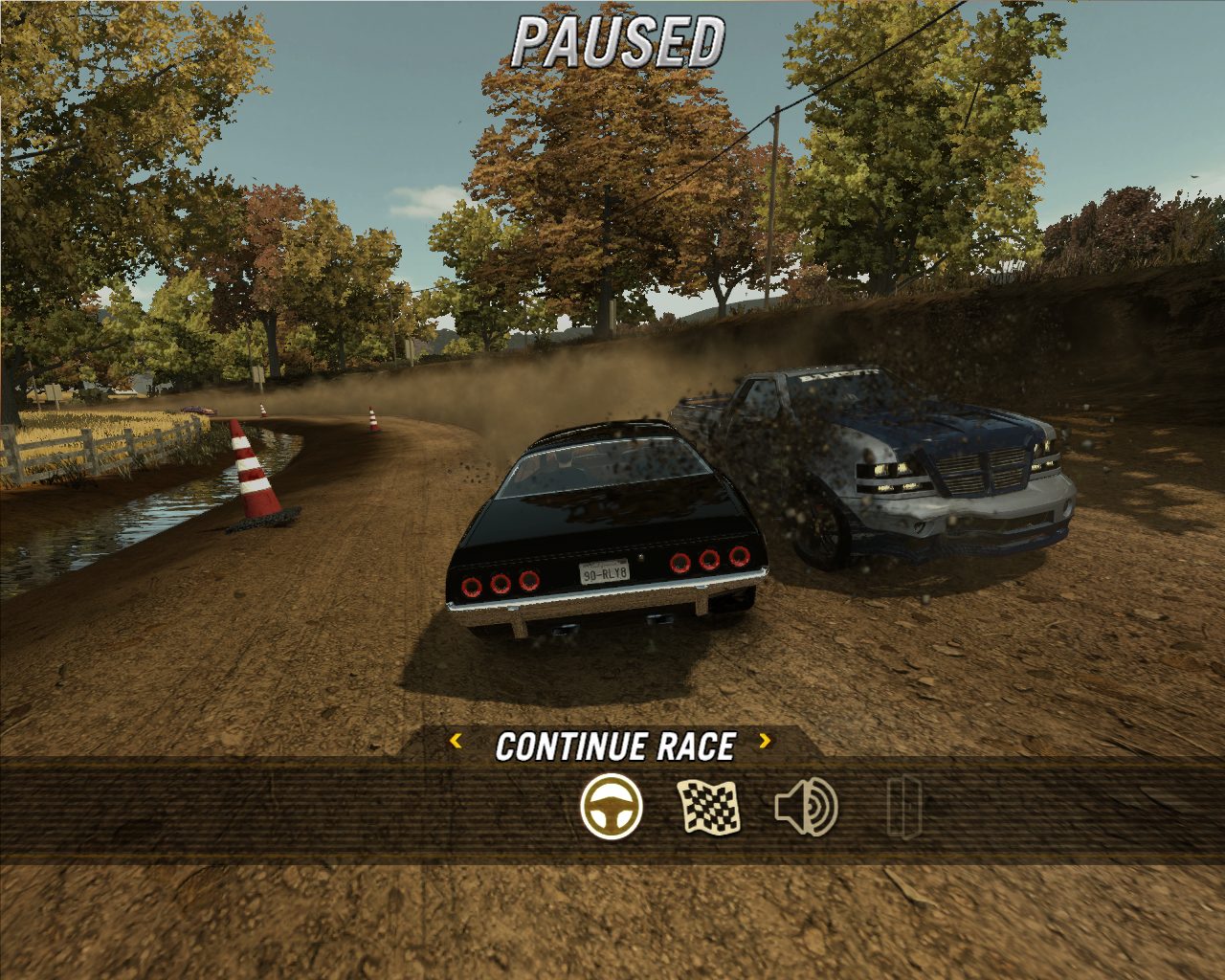 The auto catch-up system that slows or speeds up the AI drivers depending on your position is reasonably good. Sometimes this catch-up gets a little unfair and it feels like it’s biased towards previous race results but generally it tries to keep you amongst the action. It was fairly common for me to be just behind the top three at the start of the last lap and then finish on top. You should definitely upgrade your cars as it’s incredibly cheap and really helps improve the speed and handling of vehicles. Unfortunately the game outstays its welcome with this FlatOut mode much like FlatOut 2 did, later during the campaign you’ll be repeating tracks with more laps and it generally gets tiresome especially when the action isn’t particularly high for the five lap races. Carnage mode helps remove this arduous gameplay and makes FlatOut fun again.

Carnage mode draws the same events and tracks from the FlatOut mode however in races it changes the dynamic almost entirely. Although you continue to race around a track with a pre-allocated car, this time you have checkpoints that add time to a clock, once the clock reaches zero the race ends. At a standard speed it will probably give you three or four laps and your objective in that time is to cause as much havoc as possible. Although you get some points for staying in front and destroying items laying around the track you get points much faster by crashing into other cars.

More importantly you’ll need to completely wreck (eliminate) the other vehicles to get lots of points. To help you out with this task nitro is continually added to your vehicle as you race giving you plenty of burst speed for making the crucial collisions. Carnage mode almost forces you to drive offensively, ramming opponents directly into barriers doing massive damage or flying through objects on the track while keeping forward motion. If you happen to get in front it’s probably wise to drop back in order to have a target to crash into. As with FlatOut mode there is a high level of satisfaction to pull off a successful crash into a vehicle with nitro on, only this time it happens more often and the impacts are bigger. Carnage mode truly shows how much fun FlatOut can be, it’s many times more destructive and enjoyable without the frustration of trying to be in 1st place all the time. Carnage mode essentially bridges the gap between racing and destruction derbies nicely. 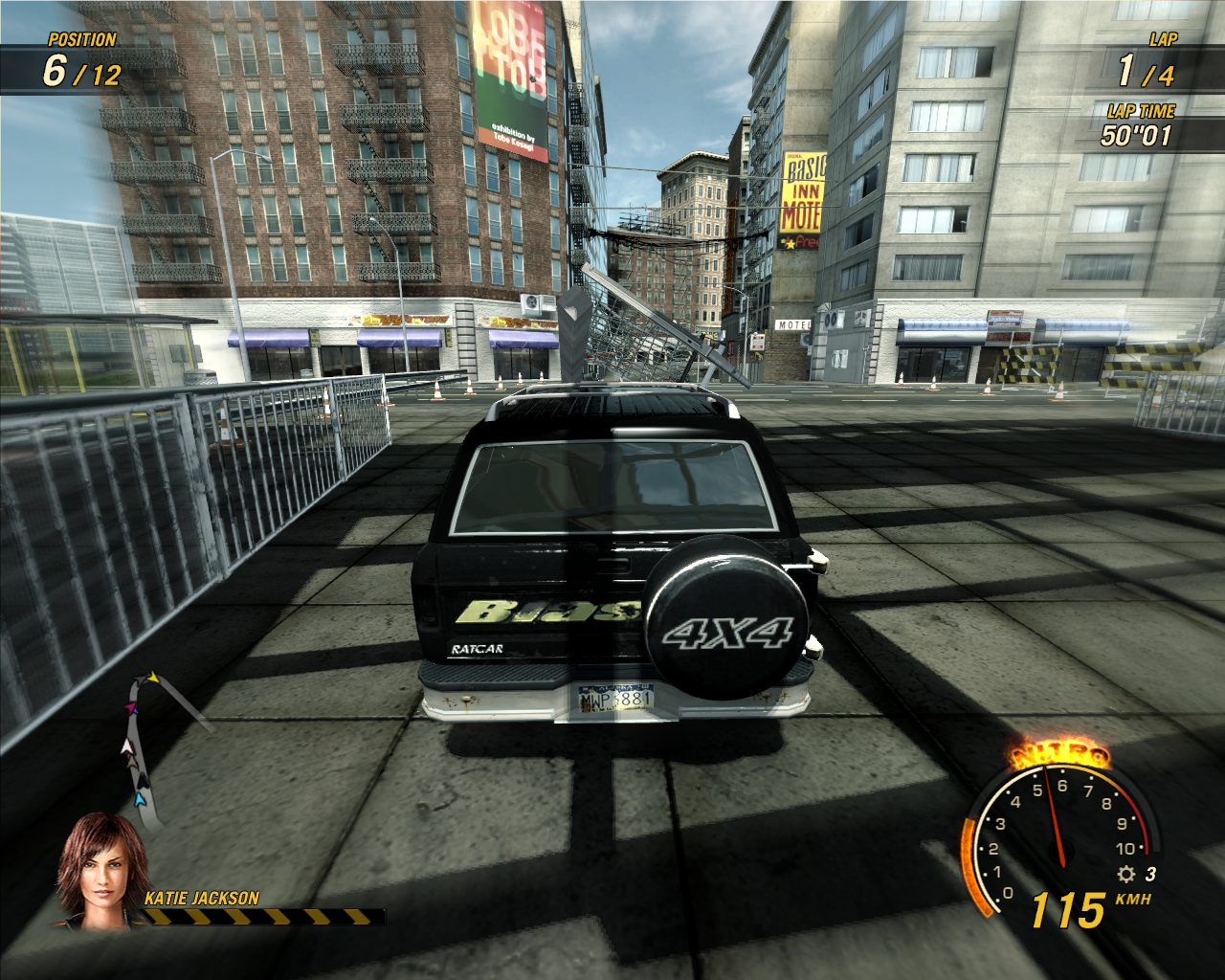 Aside from the rather laborious FlatOut race mode one issue with the game is as simple as the camera position while other issues are generally minor. For most vehicles the rear camera position is perfectly usable, for a few larger vehicles it’s far too low. When going up slight inclines or over hills it becomes quite difficult to see just in front of you. It’s unclear if this is a deliberate disadvantage considering how powerful the large vehicles are in races but it’s unlikely considering that the small fast vehicles are nimble and can maintain the lead fairly well. Surprisingly the truck unlockable has its rear camera significantly higher allowing plenty of room to see in front of the vehicle. A custom camera angle option would have been the perfect solution. Unlike the rear camera angles the other angles aren’t very practical given the high crash nature of the game, with the vehicle / camera regularly flipping or spinning.

It’s also quite strange that the game encourages you to hug the guard rails rather than driving without contact because you maintain high speed and the rails only do minor damage to your car. Unlocking the flatmobile requires constant hugging on these corners at full speed only trying to avoid flipping yourself over. The guard rails do provide a way to keep the player on track but at the cost of laziness when driving. Perhaps a final minor annoyance is the fact that you can’t use the mouse in the menu, it’s not an huge issue when the menus is very basic and you don’t spend much time there. The game does support the 360 controller very well though and it’s well worth considering using one if you plan on playing it for the rumble effects. FlatOut Ulimate Carnage isn’t breaking new ground, but what it does feels pretty solid and should keep arcade racing fans suitably satisfied.

Multiplayer is fairly laid back, and quite easy to get into and enjoy. You’ll be often free to choose from a range of unlocked vehicles, and that choice again depends heavily on the game mode and race track. With about five players online the larger tracks can become a little lonely especially if you’ve taken control of a heavier slower vehicle then you’ll be spending most of your race time far behind the players hoping they crash themselves out. On the flip side in a fast vehicle you might be well ahead trying to stay on the track. Crashing some of the real opponents out can be again fun and satisfying with a little more incentive than against bots. 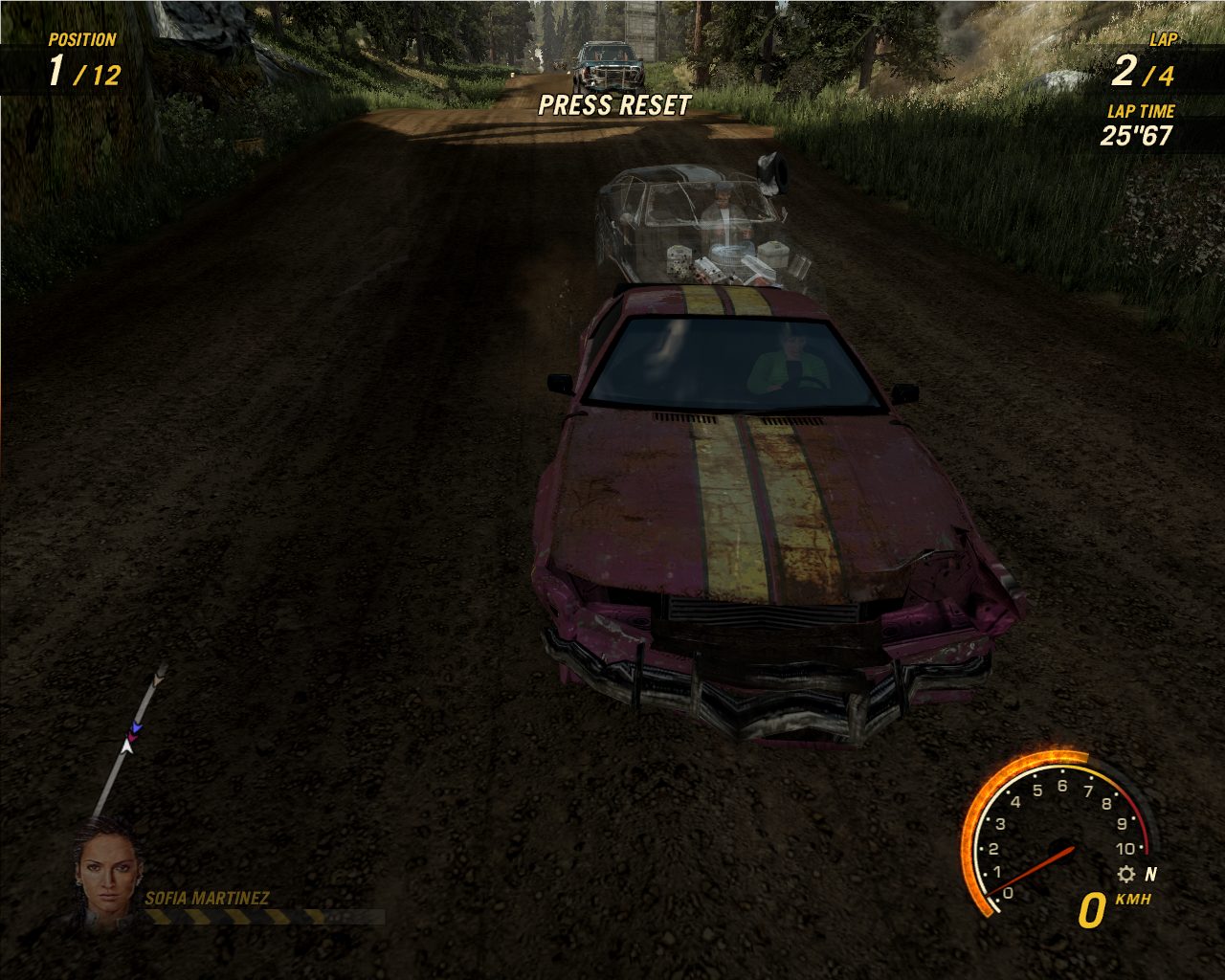 Derby type tracks and modes, including reversing the race direction after each lap, offer much more collisions in a race. The netcode is good enough and small player counts ensure the host can usually manage all players without serious problems. There is some warping of other cars but your car will behave very normally as in single player. You hop into a lobby and there is some text chat for PC users. The setup is pretty basic although there aren’t huge numbers online you should be able to get a match during peak times. It’s well worth a look in order to continue the carnage against human aggressors. FlatOut links in with Games for Windows Live, offering the basic matchmaking services and of course the achievements like the Xbox 360 version.

Our ratings for FlatOut: Ultimate Carnage on PC out of 100 (Ratings FAQ)
Presentation
80
Good track design although most reused from FlatOut 2, nice looking cars and some good physics.
Gameplay
81
The core mechanics are simplistic but offer some good fun even through repetition.
Single Player
75
Lengthy FlatOut mode wears very thin near the end although it offers over 20 hours of racing without doing all the challenges.
Multiplayer
74
Bring the carnage online for simplistic and average multiplayer experience, can be fun to crash out real opponents for a change. Not huge amounts of players online.
Performance
(Show PC Specs)
CPU: AMD Athlon AM2 5600+ @ 2.9GHz
GPU: Powercolor Radeon x2900xt 512MB
RAM: 4GB DDR2
OS: Windows Vista 32-bit

82
Runs quite well for how it looks and the collision work going on. 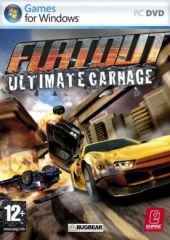 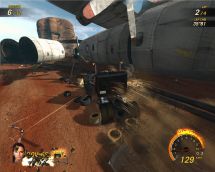