More than meets the... no, sorry, that's too obvious

When it comes to franchise tie-ins, it's hard to think of a medium that gets shafted as frequently as video games. Everybody seems to have that one childhood tale about the dreadful tie-in title they received for Christmas by a well-meaning but relatively clueless relative; the balance of karma apparently required that for every lucky kid unwrapping a copy of Link to the Past, there was another somewhere in the world staring despondently at a Super Godzilla cartridge while a paper-crown-wearing sibling blew a party horn in their ear. It's no secret why this sort of thing happens - underpaid amateur developers, ridiculous deadlines, arbitrary requirement checklists, franchises that need video game tie-ins about as much as they need licensed toilet seat covers - but perhaps, just maybe, it could be avoided if we handed the licenses to developers like Platinum Games more often. Finally, a game about beating up giant robots made by a studio that already knows a thing or two about beating up giant robots. 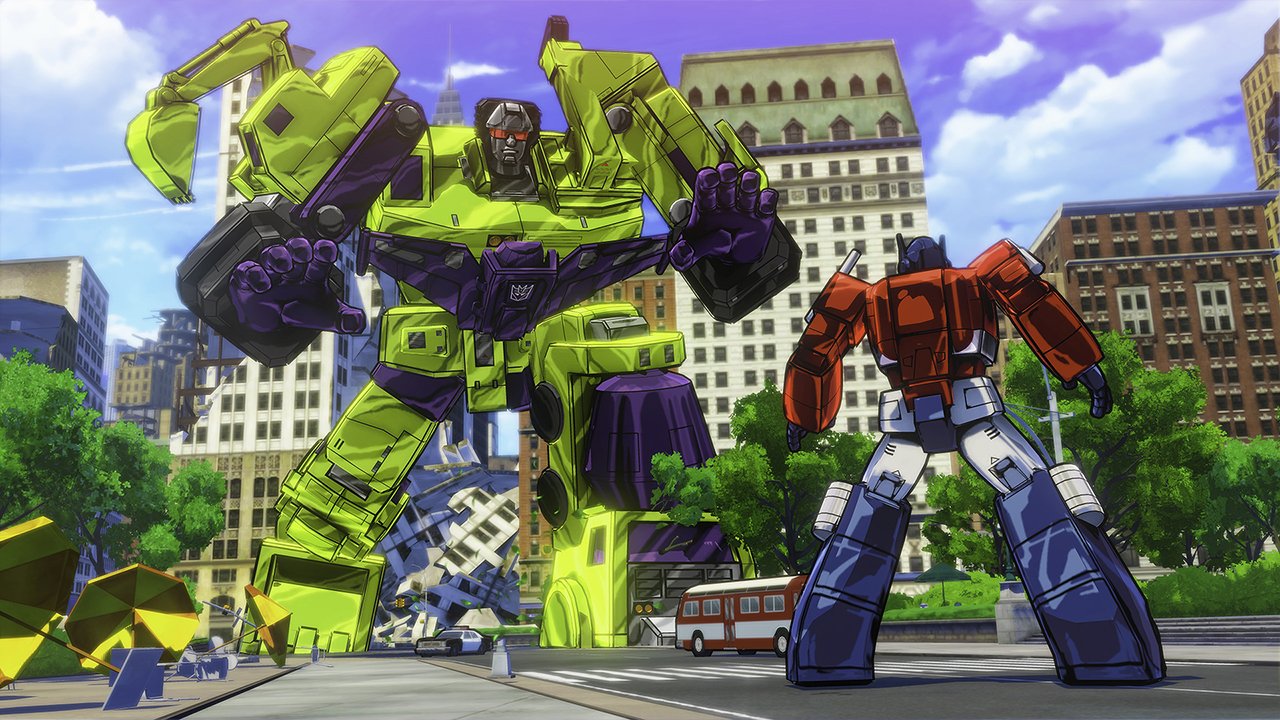 I've never seen the giant robots in question introduced in such a no-nonsense manner, either. Somebody out there apparently realized that there was money to be made off the collective nostalgia for when Transformers was just about gimmicky toys and an eighties Saturday-morning cartoon, and while you could argue that this is a cheap way to get a certain pool of thirty-somethings to part with their money, it does mean that the whole game is bright, colourful, and remarkably low on exposition too, as if it really was written as an episode of the show. No time is wasted on coming up with overwrought answers to unspoken questions like “how did these robots get here?”, “why do they turn into cars?” and “where did all the people go?”; there’s an enormous buried spaceship causing havoc for Generic American City™ (playset sold at participating retailers) and that’s all the reason the Autobots need to give the Decepticons a good kicking, I suppose. There are some nice touches that fans probably feel the need to obsess over - returning voice actors, a veteran writer, characters turning up out of nowhere in a way that just screams “hey kids, look who it is!” - but for you and I, the plot is really just a slightly-contrived framework for Platinum to do what they do best.

They're not in danger of losing their touch, that's for certain. Out of all the Platinum titles, Devastation’s combat feels the least focused, not in a bad way so much as a “we’re bolting on bits from all over the place and making them fit somehow” kind of way. With the director of Metal Gear Rising on board once more - Kenji Saito - it’s no surprise that the flow of the combat feels a mite familiar, effortlessly moving from combos to stylish slow-motion finishers and back without ever breaking pace, but the system has enough tricks up its sleeve to stop the formula getting old. Borrowed from Bayonetta is the ‘perfectly time a dodge for slow-motion’ mechanic, which is every bit as rewarding as you’d expect, and there are all-new third-person shooter mechanics - it's okay, there's no cover-based shooting, you can breathe that sigh of relief - thrown into the fray for when closing the gap on an enemy just isn’t an option. Weapons are acquired as part of a Diablo-like loot system - yeah, I didn’t see that one coming either - and there’s a pretty respectable amount of customisation you can do to the five playable Autobots, each with their own set of special abilities. There's even a system of leveling elements thrown in there, though whether or not they actually have a significant effect on gameplay is still kind of a mystery to me. Despite having a lot of systems going on at once, it all feels surprisingly coherent and by no means gimmicky. It’s not all rosy, mind; they threw out Revengeance’s parry mechanic in favour of Bayonetta’s, and while you could probably chalk my sour reaction to this down to personal taste, the binary distinction between a successful parry and being slapped in the face with half a ton of polished Decepticon metal really turned me off using it. 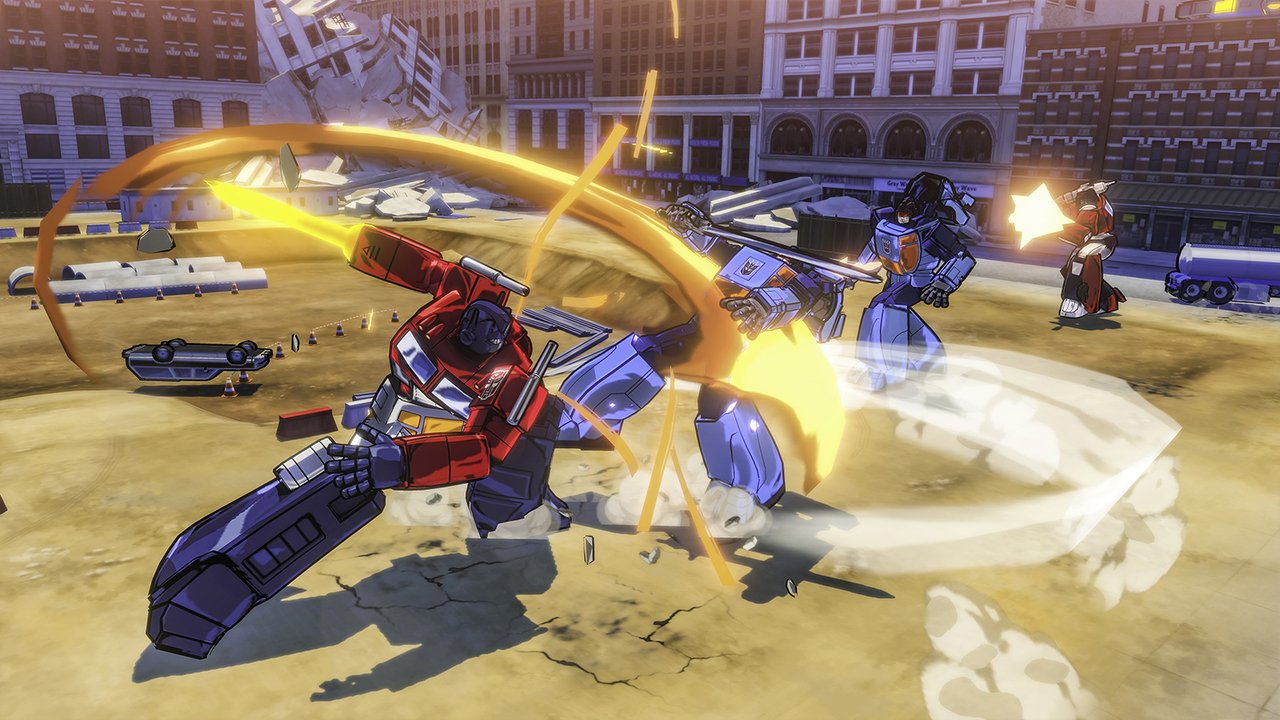 Of course, the big problem that has always plagued Transformers-themed games is that gameplay as a vehicle - even a sentient one that can sprout guns whenever it pleases - tends to be fundamentally different from gameplay as a big stompy robot, and the marriage of the two is never a particularly elegant one. Platinum’s approach pretty heavily favours the latter, as it turns out it’s kind of tricky to animate a car performing a riposte, but integrates vehicle mode in surprisingly inventive ways. At first glance it’s little more than a glorified, easy-to-control turbo mode, letting you circle-strafe groups of enemies from a safe distance, but by attacking from top speed you can king-hit an enemy hard enough to break shields and knock them clean across the arena. Furthermore, without a high-frequency blade anywhere to be found, combos can’t end with you chopping your foes into enough pieces to make the physics engine sweat blood, so instead you momentarily transform to perform powerful finishing ‘vehicle attacks’ that tend to have knock-down or area-of-effect properties. It’s a purely visual distinction, of course, as you return to robot mode when the move is over, but since a lot of vehicle attacks function as massive gap-closers too, it feels strangely appropriate. And honestly, would you pass up the chance to see Bumblebee sweep a load of Decepticons off their feet with a single tailslide? Me neither.

But it just wouldn't be a Platinum game if we didn't have things to say about the camera, would it? Devastation's is a few steps forward, by which I mean it doesn't have a panic attack when you press it up against a wall, and more than a few steps back. Without any kind of reliable lock-on system - presumably to accommodate actual aiming into the gunplay - keeping track of fast-moving foes is like trying to swat flies with your neck in a brace, and when you enter vehicle mode - in which you move faster and would therefore probably like to be more aware of your immediate surroundings - the camera moves in so closely you start to wonder about its interest in your Autobot's fabulously-sculpted Autobutt. Whenever you're whaling on a Decepticon the regular camera has a habit of moving to the side like an inept machinima maker, and while this does give you a better view of your current punching bag's tells - handy, since even regular enemies can be surprisingly resistant to being stunlocked - I'm not sure I appreciate it having its own goals when there are probably other enemies I'd like to keep an eye on too. 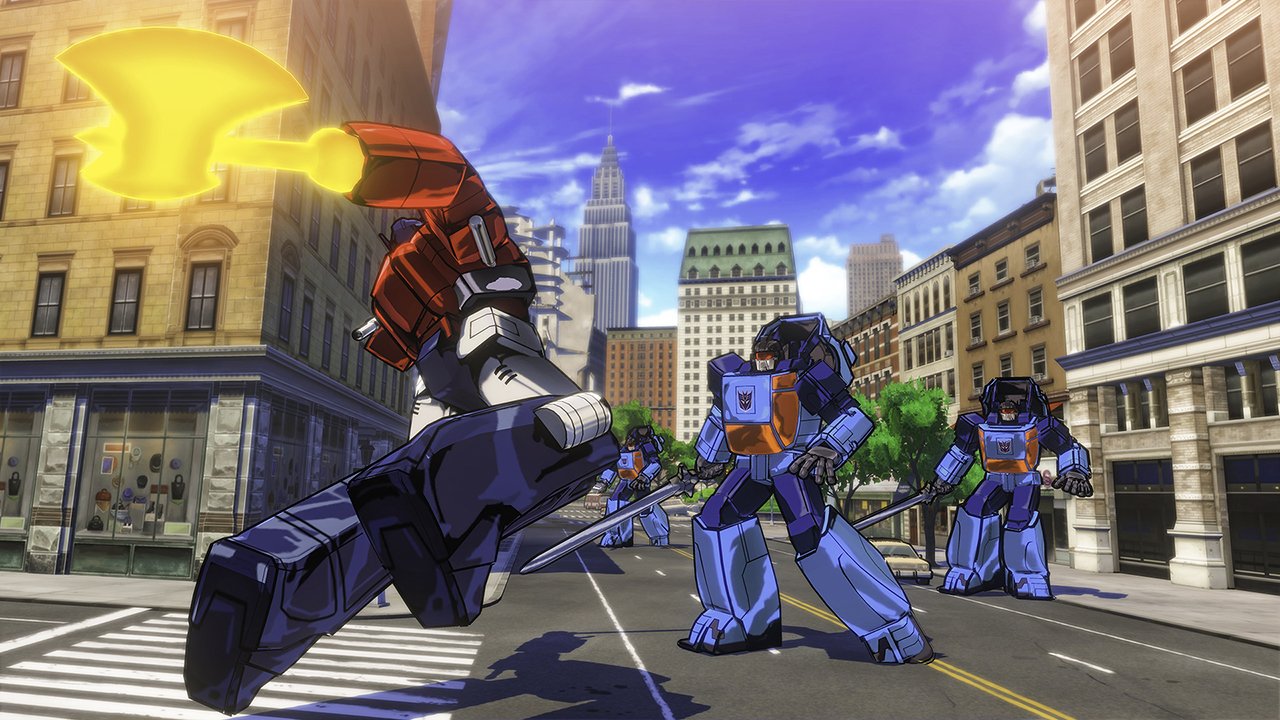 Then you have the issue of guns, which turns out to be an enormous can of worms even if you're thirty feet tall and made of semi-trailer truck parts. Not to say that they can't be effective in the right situation; the Transformers, unlike Dante, load their guns with something other than freeze-dried peas and actually have some measure of control over what they're targeting, but there are still so many factors standing in the way of them being a fun part of the combat. The third-person shooter controls are all very intuitive, and I'm sure that's a lot more fun to people than fiddling with a targeting indicator constantly, but having to drop everything and aim for out-of-reach targets halfway through a combo is like stopping in the middle of a dance routine to yell at the bloke in the rafters for not tracking you with the spotlight properly. There's no flow or sense of integration with the rest of the combat, mercifully few of the precious subtleties that make the melee action such an unrestrained joy, just a bit of pointing and shooting. When you hold down the button to bring up the aiming reticle you'll automatically snap to a target, which is pretty understandable; Platinum's games have always played best with a gamepad, and complex aiming would only further serve to break up the flow of gracefully beating up giant robots. So I'll ask again: why can't I stay locked onto a target?

Whenever you're up against moving flying enemies - one of the few practical situations where you'd want to use ranged weapons over, say, walking over and just pummeling a guy - they're a nightmare to hit because the 'snap to' function always lags behind their movements, and many are too slippery to land more than a couple of lucky shots on with manual thumbstick aiming. I'm sure this is all about raising the skill cap so that perfectionists can spend hours in a miasma of self-loathing becoming adept at knocking supersonic jets out of the air with a carefully-lobbed pebble, but gimping the controls like this simply isn't a fun challenge. By the time I'd reached the final stages of the game, my loadout - you can have four weapons equipped at a time - consisted of two gimmicky utility gadgets, a requisite melee weapon, and a machine gun of some kind to hopelessly spray distant targets with. 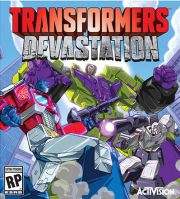 All videos for Transformers: Devastation (4)
Advertisement ▼