A rewarding strategy title with good presentation, spoiled by interface flaws and a fumbling campaign

The once great and powerful real-time strategy genre is no longer a dominant force in PC gaming. In the last five years there have only been a handful of prominent RTS titles released per year. Compare that with the ‘golden-era’ of RTS gaming, typically defined as the period between the late 90s and early 2000s, which saw around two dozen games each year. Why has the genre shrunk? Perhaps it is no longer profitable in the multiplatform world, or maybe the genre was oversaturated. It could be that some have mutated into the incredibly popular MOBA genre. In any case, a trickle of traditional real-time strategy games has prevented the genre from being forgotten. Games like StarCraft 2 and Grey Goo are fine examples of recent flashbacks to that prolific era. Act of Aggression stands beside these games by offering a nostalgic trip back to the days of the Command and Conquer series. Similar to Act of War: Direct Action, also released by Eugen Systems 10 years ago, it offers gratifying strategy with some nagging issues. 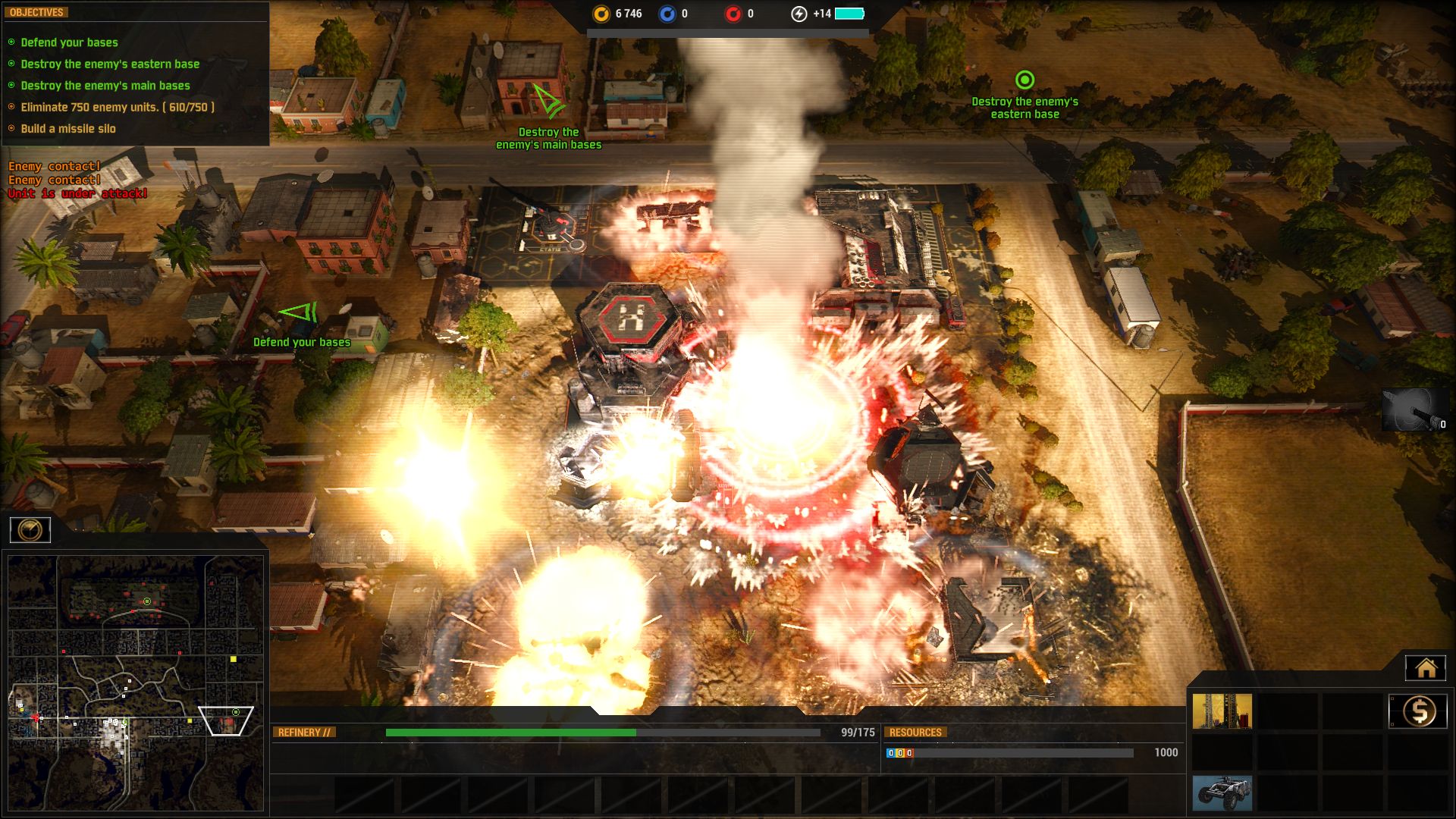 It wouldn't be a traditional RTS without a superweapon

Act of Aggression is a near-future military strategy game that requires players to construct a base, gather resources, produce units and decimate aggressors. As with similar titles it has three basic modes: campaign, skirmish, and multiplayer. It also has three different warring factions—Chimera, Cartel, and the US. They all produce aircraft, ground vehicles and infantry. And, just to complete the theme, each faction collects three types of limited resources. Creating structures is crucial, either for producing units, defending buildings or expanding influence. Micromanagement is encouraged via the capture of fallen enemy soldiers, creating another source of income, and also via the control of vehicles that prefer travelling along roads. Constructing an organized base and steamrolling the opposing faction provides the same rhythmic flow that was prominent in older RTS games.

All three factions share similar units and structures but there are prominent differences. Each faction has a main headquarters which produces a recon unit that will locate resources. Vehicles and infantry are produced by different structures, and higher-tier buildings will put strain on your bases’ power grid. The difference between each faction is not extreme, but it does result in some altered tactics. For example, the US faction has the field-upgradable Abrams tanks while the Cartel faction has stealth tanks that gain bonus damage when hidden. Powerful ranged bombardment is provided by one of the Chimera’s aircraft, which contrasts to the Cartel’s long-range, high-health grounded artillery. The factions are just different enough to be interesting without putting too much strain on the balance.

The single player campaign spans 15 missions from the perspective of two of the warring factions. It mostly involves the Chimera faction—a covert force under UN control—with ten missions set around the globe. Five missions are reserved for the Cartel faction, essentially the antagonists, operating from the shadows. Although the US faction does not have its own campaign, you will control their units and bases during some of the Chimera missions. Between each mission are voiced briefings that repurpose news footage and include hand-drawn pictures with a flashy background. It is hard to remain interested in these dry and cheap-looking briefings, and this might be why the story is partly incomprehensible. No context is provided early and this hurts the opening missions. If only the campaign had the slick presentation and story elements from Grey Goo. Instead, it needlessly confuses and hurts what could have been a good campaign.

Unlike the story, the missions are good although difficult. The opening missions are too simple and creating a decent-sized base is only possible from mission five. Objectives are standard but well crafted, with optional tasks that might involve destroying a secondary base or keeping specific units alive. One level has you escorting cargo trucks through a highway and another involves placing infantry in houses as tanks roll through a rural town. As you get to the end of the Chimera campaign, the missions become tough, mostly because the enemy bases are well established and continually attack with their plentiful resources. The final Chimera mission took more than a dozen exhausting attempts before a barrage of tactical missiles could turn the enemy bases into manageable rubble. Unfortunately there are no difficulty or game-speed options, so repeating missions is par for the course. Being aggressive with powerful units is often encouraged and players who like to turtle may struggle because of the limited resources. 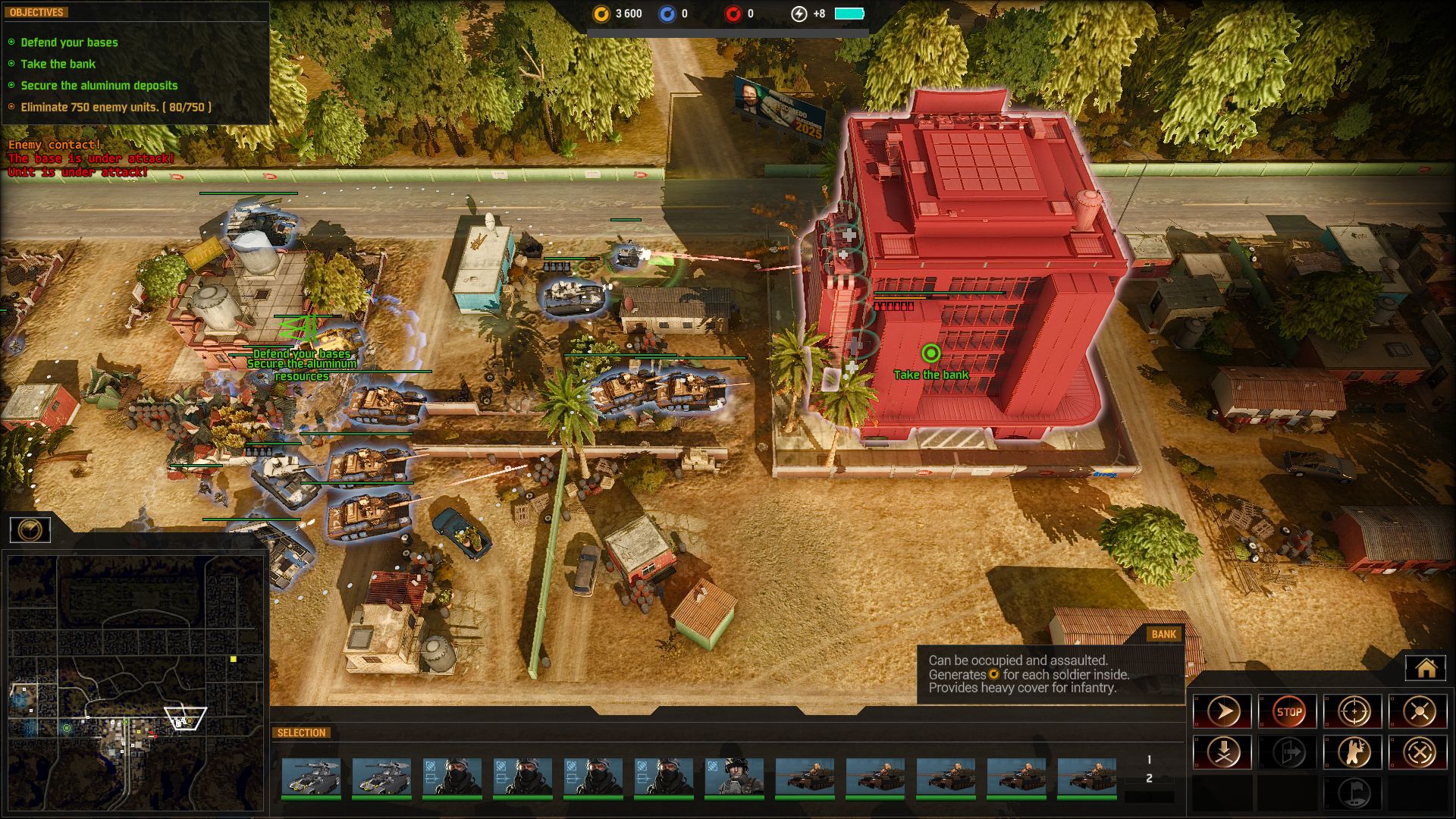 Factions vie for control over banks that provide income

The campaign is made harder because it seldom explains the basics. In the ninth Chimera mission, when you gain control of a US base—also unable to produce buildings—you are told to collect resources from depots. Up until this point it never explained how because resource gathering had been automatic. You must direct some partially-camouflaged trucks to bring the resources to the main base. Coming into the campaign cold exposes these issues, like needing to use the ctrl button just to move a group of units at the same speed. Another persistent frustration involves vehicles following roads almost religiously, so forgetting to set invisible waypoints (shift button) leads to finding their burnt-out husks on the roadside because they moved one-by-one through an ambush. Hints are provided on the loading screen, but the loads are so fast—usually a good thing—that there is not enough time to read them. There is no official game manual, which is quite the contrast from the golden-era, and no basic tech tree guide. The general confusion arises because the story never gives you time to experiment; you are constantly under pressure. If the campaign was better presented and less punishing, it would have been much better.

Artificial Intelligence is a big part of skirmish mode, and the computer armies are capable. During the campaign, the AI is influenced by artificial triggers, like launching tactical missiles after you destroy a specific base. Skirmish armies forgo these preset triggers and will change tactics from one game to the next. In either mode, the computer uses the different units smartly. Artillery will sit just within range, backing away if they receive damage. Outnumbered units will retreat to fight another day. Essential tactics can be observed, like not attacking when in stealth or moving slightly to deal more damage. The AI difficulty can be adjusted in skirmish mode, and this dictates aggression, base construction, and how quickly they reach the higher tech tiers. Although very hard AI is not immune to stupidity, as proven when they repeatedly sent recon units down same road so my tank battalion could practice their aim. Despite this, skirmish mode provides good value, with around 18 varied maps, and fairly smart AI.

Multiplayer is where the devoted will find the most value. From a technical perspective the online connections are solid. There is some delay when issuing orders and this can be painful given the numerous micromanagement aspects—like placing infantry in vehicles or positioning repair units. Occasionally the game will pause when it has major connection issues, but it usually recovers quickly. As with similar games, build order and resource control are major components of success. If you control a few bank structures across the map, which provide a stream of income, you are already one step ahead. The resource nodes also change location in subsequent matches, which results in different base layouts and changing encounter zones to improve replay value and make the recon stage critical. There is not a huge audience playing multiplayer, but you should be able to get a match most times of the day. 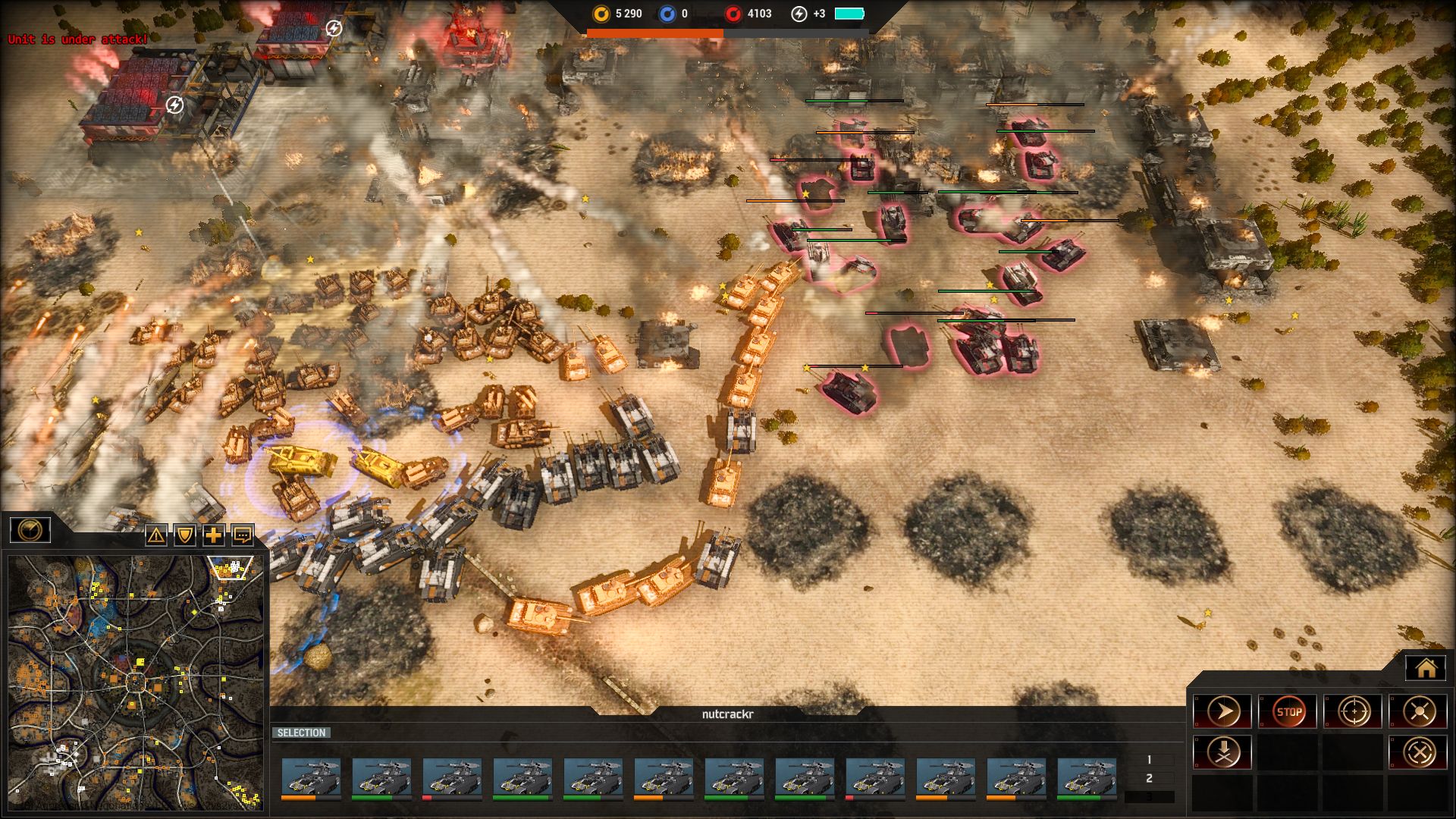 The visual and audio package is high quality. The retro music is wonderful and it is a pity there weren’t more tunes. The level design is also great; maps are dotted with houses, civilian vehicles, farm equipment and other location specific detail. Vehicle units look fantastic and you can even track aircraft as they carpet bomb the enemy base. Faction buildings look imposing, but there are a few similar designs. The camera can be fully rotated and zooms quite far in either direction. Zoom out enough and a Tactical view provides a high-contrast view of the battlefield, wonderful on large maps. The game runs smoothly at maximum settings, with no slowdowns when dealing with hundreds of units. It is also largely bug free, although there were persistent navigation issues that saw units get stuck on destroyed vehicles. Also, releasing infantry from transport helicopters did not always work properly near buildings. Fortunately there are no major issues and the performance and visuals aspects are worth praising.

The user interface does not fare quite as well. Ultimately it does not use the screen space well enough to be a seamless tactical experience. Some building icons are indistinguishable—the tool-tips are more useful. When infantry are garrisoned in buildings their icons are absurdly tiny, which is a nuisance even if the infantry icons are the most distinct. Different infantry units all look identical from the standard camera distance, which either means excessive zooming or sifting through the selected groups. Many of these issues are not going to matter after you spend time with the game, but they are a significant initial barrier. It would have been fantastic to have more control over unit actions too, like ordering them to cease attacking enemy buildings, or, because ground vehicles follow roads so aggressively, a method to discourage travel along certain routes. The interface is a persistent, albeit minor, hindrance and needed more work to match the visual package. 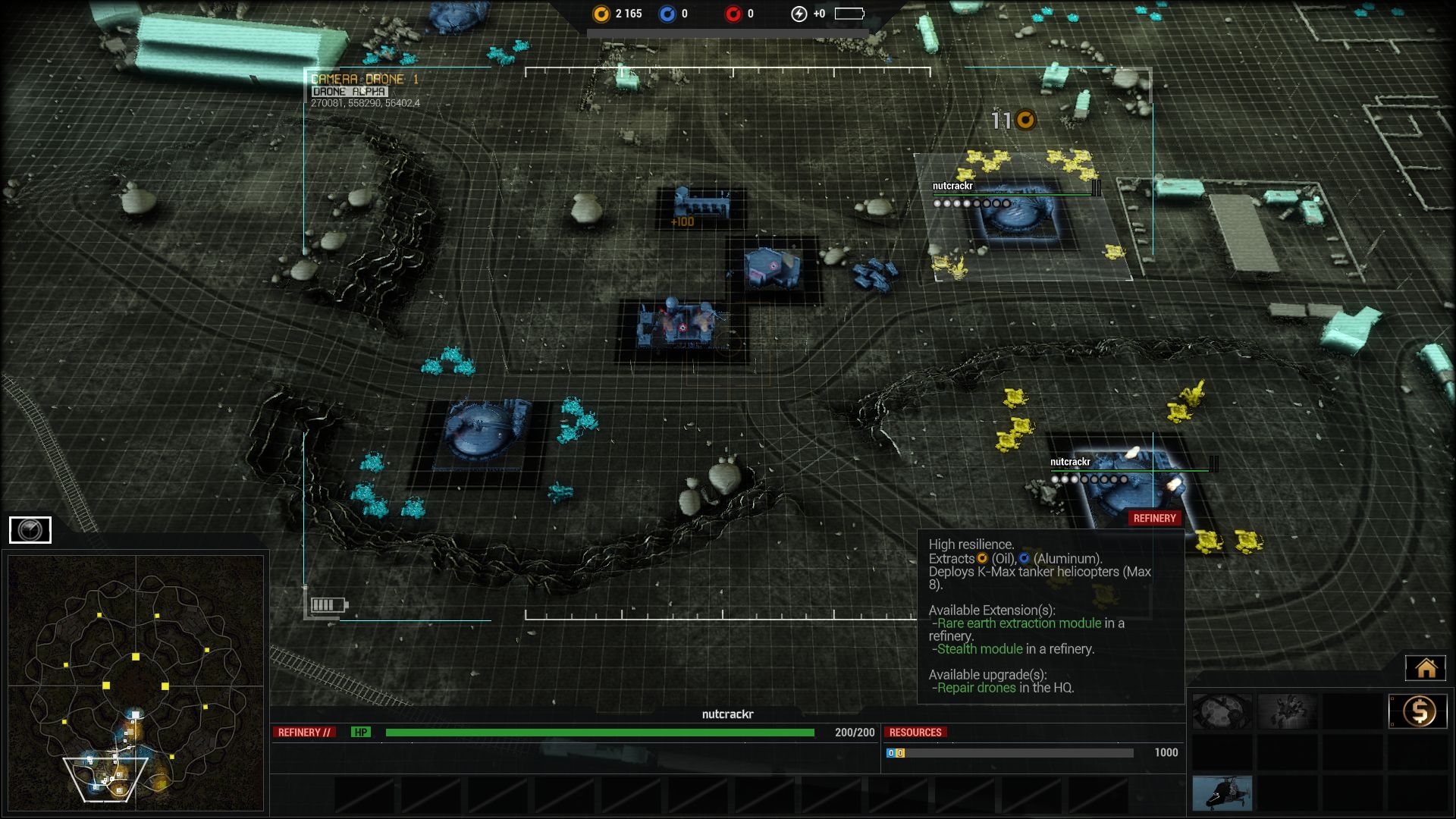 Act of Aggression is not going to reinvigorate the RTS genre, but perhaps it can explain why real-time strategy games have declined in popularity. To fully understand and appreciate the game requires many hours of intense concentration, too much to ask for those just looking to drive some tanks through an enemy base. If you have the patience, this is a solid RTS marred by design and interface issues. Its lengthy campaign includes some good missions, but the story is incoherent and presented weakly in lacklustre mission briefings. The difficult campaign keeps the player under pressure and inadequately explains many of the core mechanics. At least the AI is fairly smart, so the Skirmish mode provides good value. Multiplayer is not heavily populated but it should draw a small audience. Act of Aggression has a powerful arsenal of strategic mechanics and visual design, but it detours through an ambush of its own creation.

Our ratings for Act of Aggression on PC out of 100 (Ratings FAQ)
Presentation
78
Great units and world design. Interface needs work and story briefings are poor. Could have used more of the great music.
Gameplay
82
Under the surface is a solid strategy game with a good variety of units and building structures. Perhaps too much micromanagement.
Single Player
62
The story is confusing and the game does not provide appropriate context. Mission design is great, although too hard with no adjustment. 15-30 hours long depending on aptitude.
Multiplayer
76
Connections were good across games aside from a slight command delay. Controlling resources and using an optimum build order is crucial.
Performance
(Show PC Specs)
CPU: Intel i5 3570k
GPU: Gigabyte 7950 OC 3GB
RAM: 8GB DDR3
OS: Windows 7 Ultimate 64-bit

86
Runs superbly with only a couple of unit navigation bugs. Load times are too fast!
Overall
73
Act of Aggression is a visually appealing and well-designed strategy title that stands amid its peers as a worthwhile and slightly flawed throwback to a bygone era. 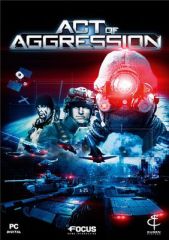 All videos for Act of Aggression (1)
Advertisement ▼